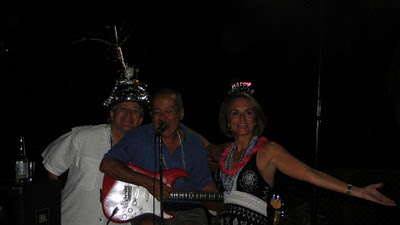 The New Year bash at the SAILFISH OASIS just gets bigger and better, Hill and Donelle Dishman in party mode with Willie from the Blue Dawgs….This year’s was the best yet with a huge asado (BBQ), big firework display and great party atmosphere for the capacity filled lodge.
To the fishing….

As predicted the bite went off before Christmas with boats releasing 30-40 sails a piece and some blues in the mix as well. Straight after Christmas we had the Denman Heard group down fishing 27th-28th. The fishing had slowed some and with a cold front pushing through though we still got all the guys into a few sailfish releases as well as a couple of tunas for the boys. 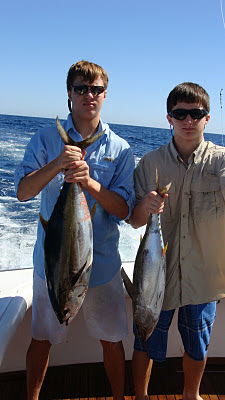 In between on our days off the bite picked up big time with a great blue marlin bite on the 29th, there were over 30 blues raised among the small fleet out with boats releasing up to 3, it slowed the next day for the marlin though the sailfish bite picked up in its place.
On the 31st we welcomed back Capt Kevin and Alicia Deerman who were fishing with us the same time last year on ALLURE to be joined by Hill and Donelle Dishman the following day. Also at the lodge were the Bryan O’Dell group of 6 fishing aboard the Circle Hook over the same period. Both boats experienced great fishing with the sails biting and blue marlin making their presence felt as well….
With Capt Kevin and Alicia on the 31st we fished up the west side of the pocket and the first fish of the day a marlin pushing water and knocking down the rigger bait though not eating. From here on in we got into a pretty good sailfish bite with 22 sails raised and 10 releases from 16 bites, Alicia was on form releasing ALL the fish and late in the day we had a nice blue of a solid 350lb’s pushing up on the flat line teaser. The mackerel was pitched and after long seconds we got a good bite and Alicia did a great job on the rod releasing the last blue marlin to be caught in Guatemala for 2011. 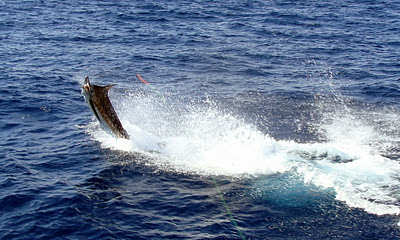 The fish put on a helluva show and topped off a great day on the water.
That night the lodge was filled to capacity plus and we saw in 2012 with a party to be remembered……..at least by those who can remember it….
1st day of 2012 Hill and Donelle joined Kevin and Alisia, nursing some hangover’s it was a late start leaving the dock sometime after 10 . Back to the area we were the previous day the fish had done a bit of a disappearing act, still for a short day we raised 8 sails and released 4 from 7 bites.
On the 2nd with Hill and Kevin we decided to look for the fish a bit more to the west, finding blue water and birds working we got into some pretty good action early on raising 9 sails by 1030 and releasing 4 from 7 bites. It was looking good though with bigger things on our minds we ran another 10NM out to the edge. On our second pass over the drop off we got the bite we were looking for and Kevin got himself onto a nice blue pushing the 300lb mark on 30lb test…. 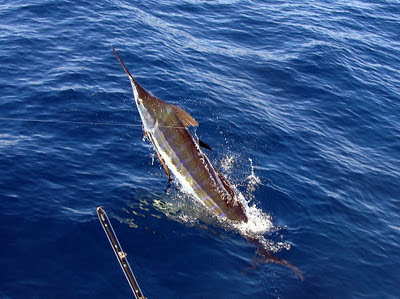 This fish was a brute and Capt Kevin put as much heat on the 30lb line as was possible, we tried different angles though it stayed deep and dirty on us for over an hour, coming up occasionally to show us it’s girth….. 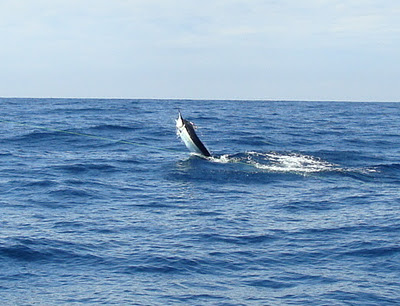 Before getting it boat side for the release and the first blue for ALLURE in 2012.
Another late start on the 3rd due to a cold front pushing through and creating a short sharp chop had us check the inside area and the bottom of the pocket just 7NM out. It was the right move with an afternoon bite turning on, 18 sails raised and 8 released from 14 bites as well as 4 nice mahi’s boated.
The weather laid down for us on the 4th and the blue water had pushed in, we put lines in the water just 5NM off the breakwall and were pretty much straight into some good action which held right through the day. Mixing it up on the fly and on the baits we had some hot fish tease in and some great fly bites with a couple of shots at doubles on the fly. 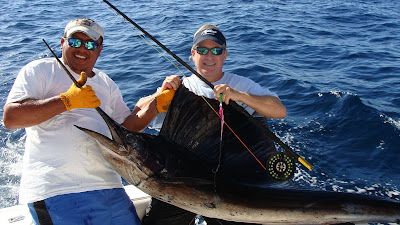 Hill Dishman with the first sail on the fly for 2012.
It was a great day on the water and just after lunch we raised a BIG blue on the long rigger teaser, the fish teased in hot and Hill was ready on the fly, though with the fish pushing as much water as it was I made the call to pitch the bait, we got the bite though unfortunately missed it. Still a great fish to see just 8NM out! We finished the day raising 27 sails, releasing 5 from 12 bites on the fly and 6 from 10 bites on the baits 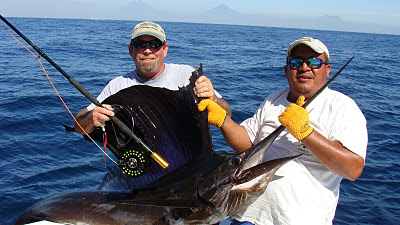 Capt Kevin Deerman with his first sail on the fly.
The following day the bite inshore was just as good with boats releasing up to 24 on conventional tackle and up to 8 for boats on the fly.
January 6th and 7th we fished with the Jack Pitts group consisting of…. 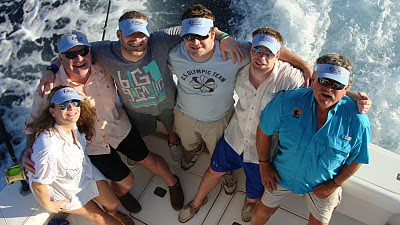 Marleta Pitts, Billy, Trent, Grant and Trey Goodwin with Jack Pitts.
The fish had done another move and were hard to find though we did get everyone into some sails and mahi’s including these… 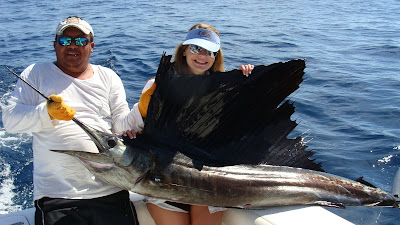 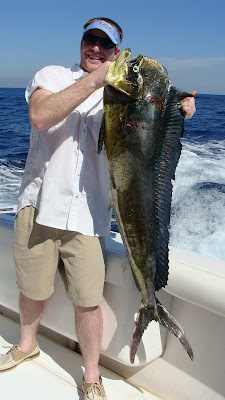 And a nice mahi for Trey.

The blue water is pushing in from the west and it looks like things are going to get good here in the next few days. We are booked fairly solid through January though there are some openings in February, these are prime dates and the fishing has usually been good with some red-hot bites in the past. March and April are also great months to fish here and with the marlin bite picking up later in the year and the tunas turning on as well. SAILFISH OASIS has been getting rave reviews from everyone who has been down with the service, food and settings second to none. We’ll make sure your trip is a first class experience all round. See you down here…..

IN SAYING THAT, WE HAVE JUST HAD AN OPENING FROM JANUARY 21 -23rd, THESE ARE WEEKEND DATES THAT HAVE JUST OPENED UP. WE CAN GIVE A SPECIAL LAST MINUTE DEAL ON THESE PRIME DATES