THAT’S RIGHT, IN THE PAST 12 FISHING DAYS HERE IN GUATEMALA GUEST’S FISHING OUT OF SAILFISH OASIS LODGE  HAVE RELEASED 602 BILLFISH AND HAD PLENTY OF XL MAHI ENCOUNTERS: 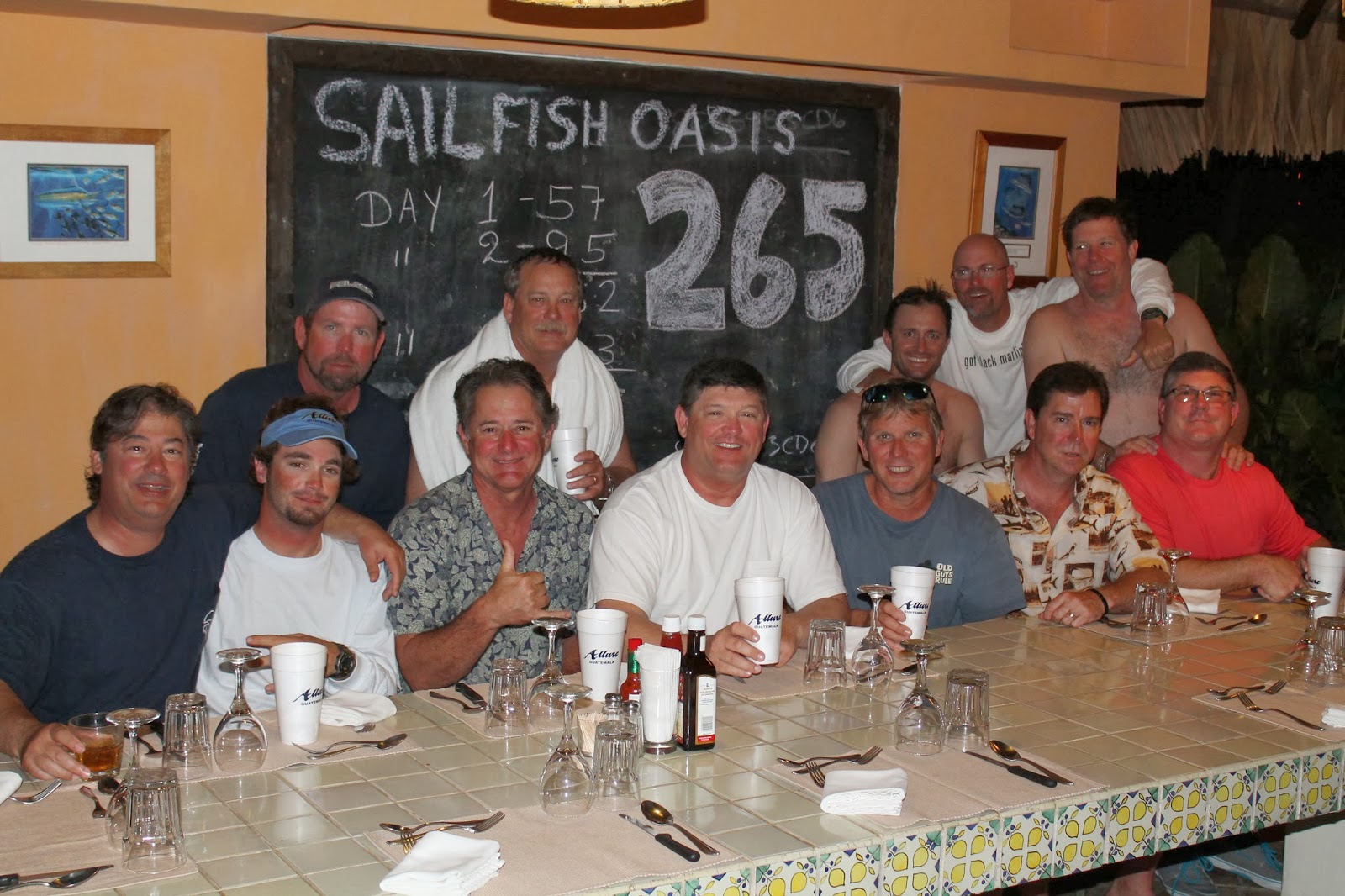 Feb 7th-9th we welcomed back this fun group for their 3rd year in a row. In 2012 their record was 213 sailfish and 3 blue marlin releases in 3 fishing days, they beat that this time around by 52 sails. The group consisting of Mark Thibault, Colin Ocker, Wes and Cody Jordan, Mike Lemker, Billy Aud, Ken Cullbrath, Randy Wendel, Mike Griffith, Kelley Erwin, Paul Kennedy, Richard Lutz, Daryl Scanlan, Kevin Deerman and Cameron Plaag split between 4 boats experienced 3 days of excellent fishing here. Aboard both Allure and Allure II, Capt Hook and A-Fin-ity the fishing got better each day with all sorts of mayhem out there, quads, triples, doubles, hot teaser fish and plenty of big mahi’s crashing the spread as well. Awesome time with an awesome group of good fisherman, not surprisingly they are already looking at dates for next year! 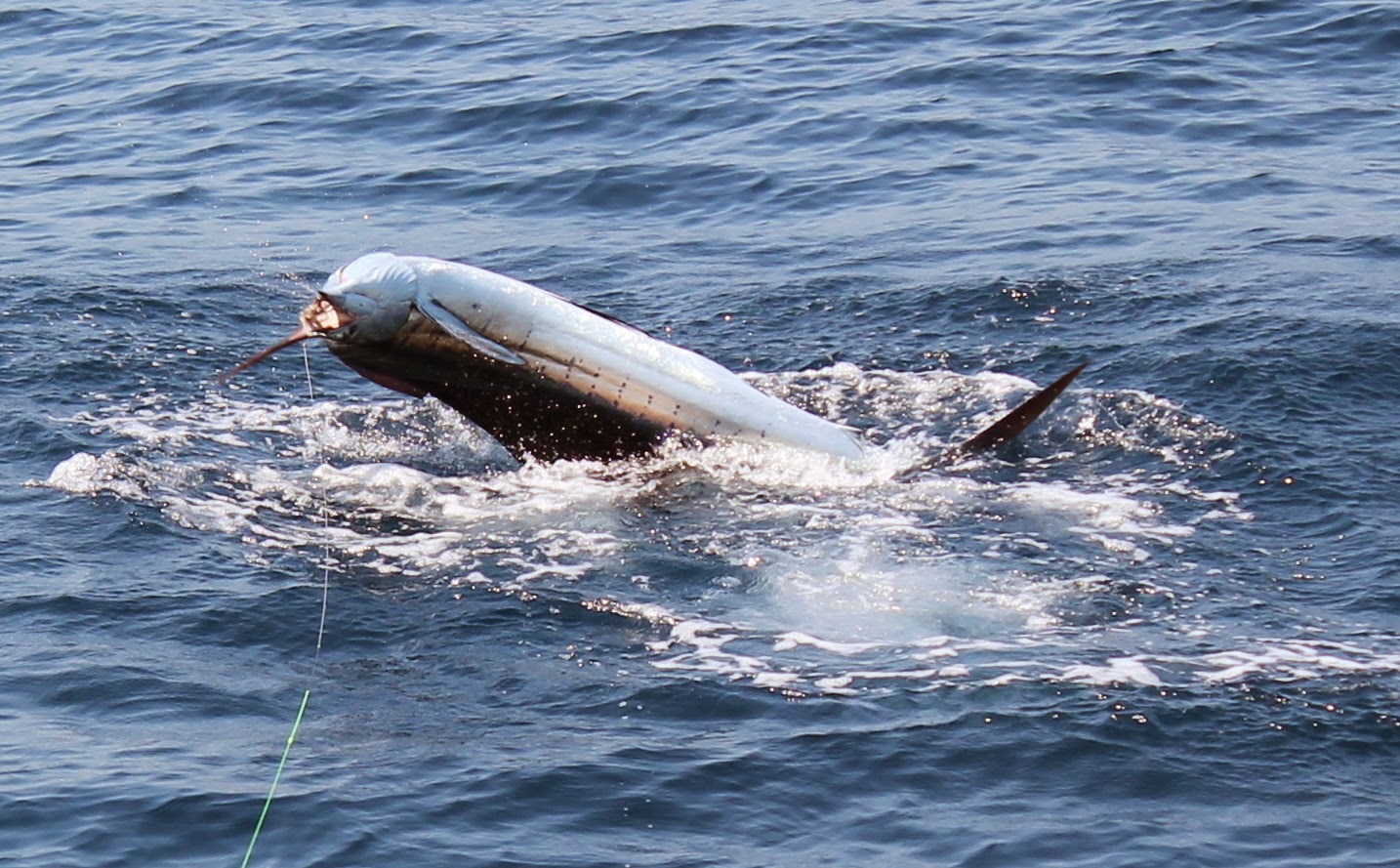 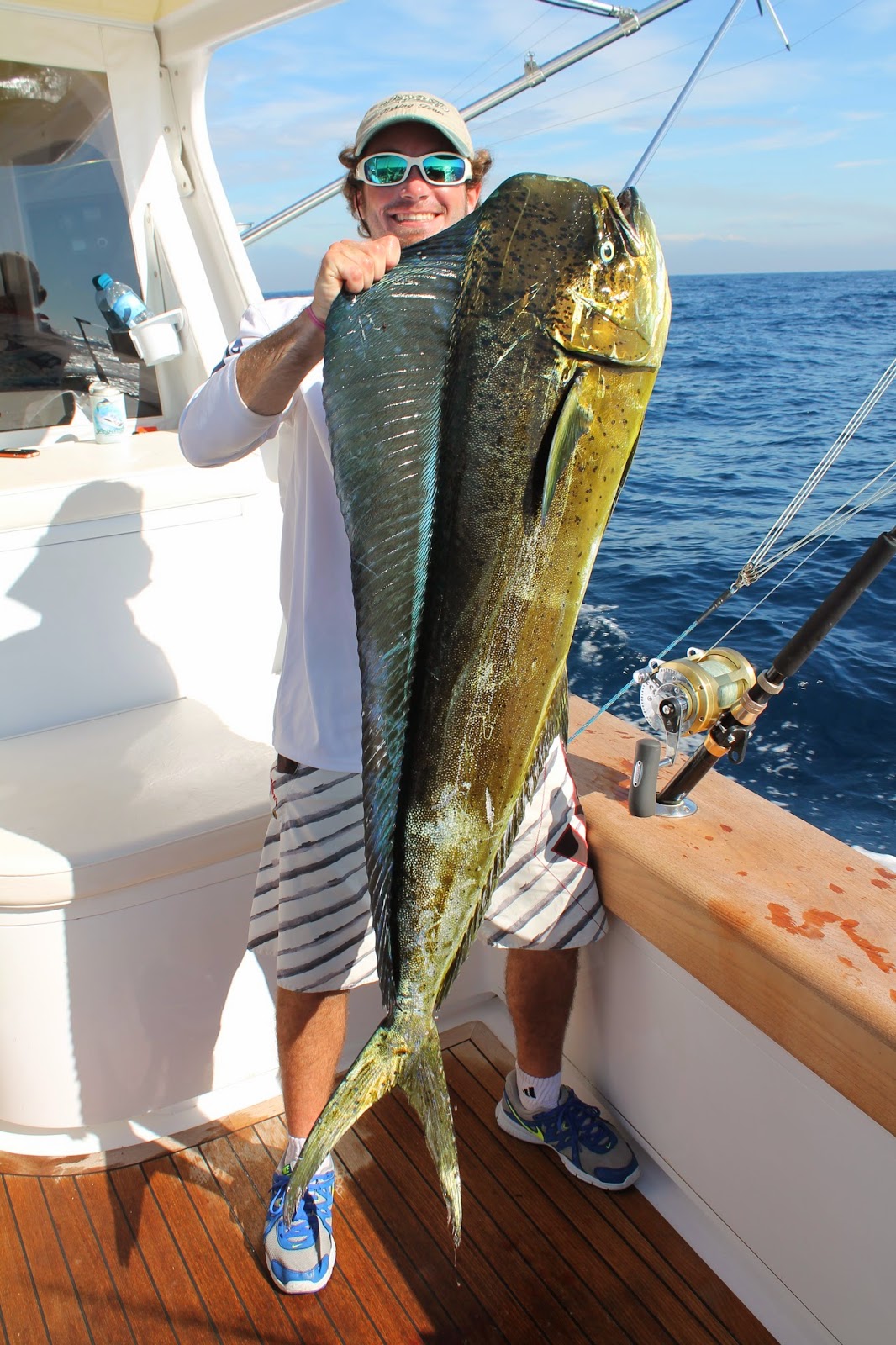 Cameron Plaag with a typical sized mahi.
Feb 10th the fishing was so good Hill Dishman and Kelley Erwin decided to stay on an extra day on the fly. The inshore bite had slowed a little so they looked off-shore to the east raising 12 sails and releasing 4 on the fly and 1 on the conventional tackle as well as several yellow fin tunas.
MIDLAND CCA GROUP 77 RELEASES
Feb 11th and 12th we welcomed the Midland, Texas, Coastal Conservation Association (CCA) donated trip to Guatemala. With 15 anglers fishing aboard Allure, Allure II and A-Fin-ity the bite had slowed a little though they were inshore and right out in front. Another fun group who had a large time down at the Oasis and plenty of laughs on the water. On their second day out we ventured out to the western side of the pocket on Allure II and found some fish late in the day with some good consistent action. We ended up fishing this ‘hole’ for the next 3 days with very consistent results. Plenty more big mahi’s for these guys as well… 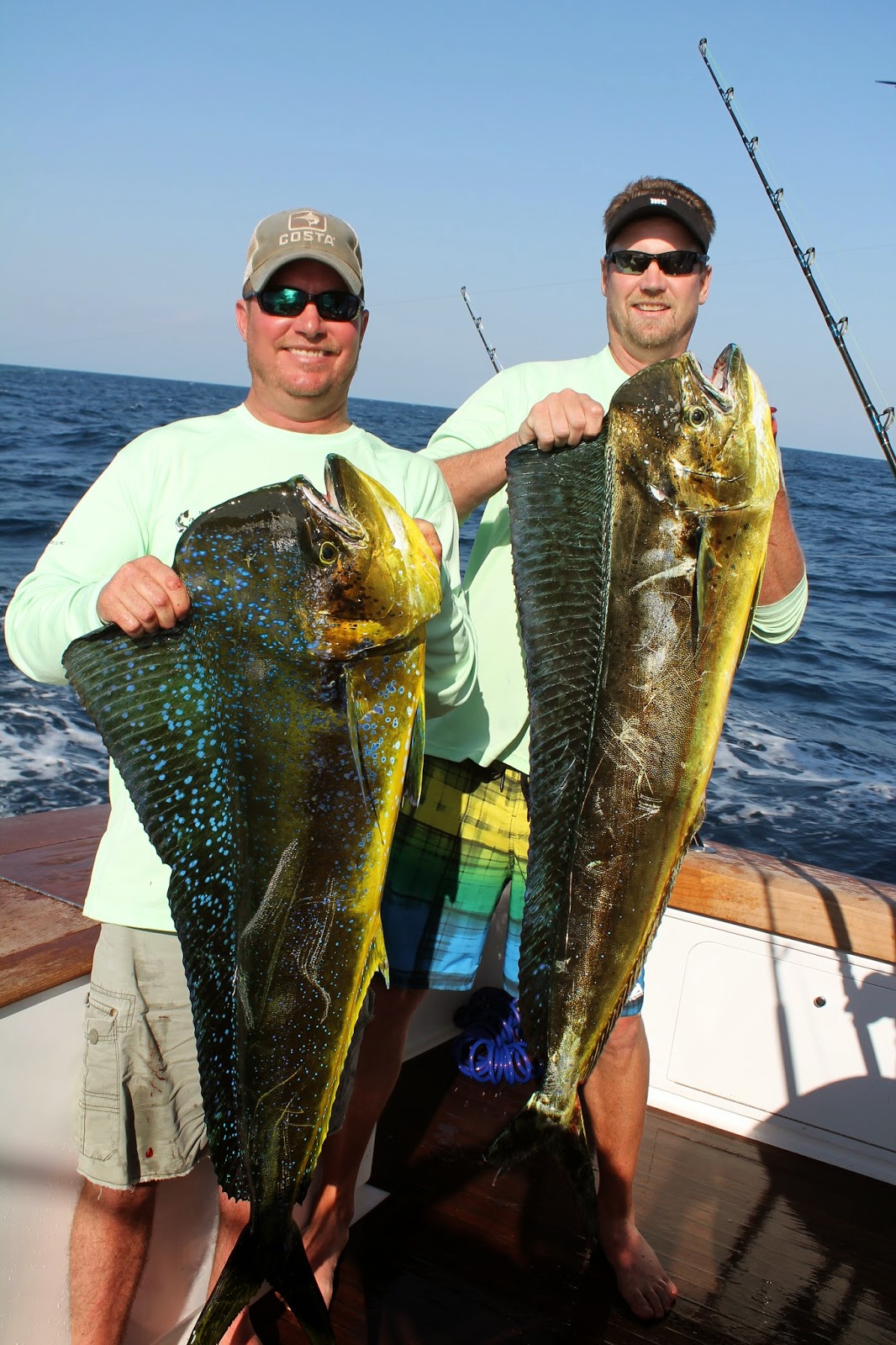 Dominic, Jon, Chrstian and Yannick.
Feb 13th-15th we welcomed back to Guatemala after a bit of a hiatus Jon Theuerkauf and Christian Machate with son’s Dominic and Yannick. Good to see these guys again with Christian and the boys flying in all the way from Switzerland and even better to see them with the fish snapping!! First day out on Allure II we went back to the ‘hole’ we’d found the previous day and the bite was on. The fleet was on a good bite over 10NM to the east side of the pocket though we had similar action with the guys releasing 29 sails from 42 bites. They picked up from where they left off a few years ago jumping in the deep end hooking all their own fish with the boys doing a stellar job. They were fishing like pro’s by the end of it and Jon and Christian didn’t do too bad either! Fishing on Allure the next 2 days they released 15 from 24 and on the last day it was Dominic and Yannick only hooking all the fish, releasing 22 sails from 30 bites! Great fishing and great hook-up ratio. Plenty of nice mahi’s in the mix as well and another awesome trip. 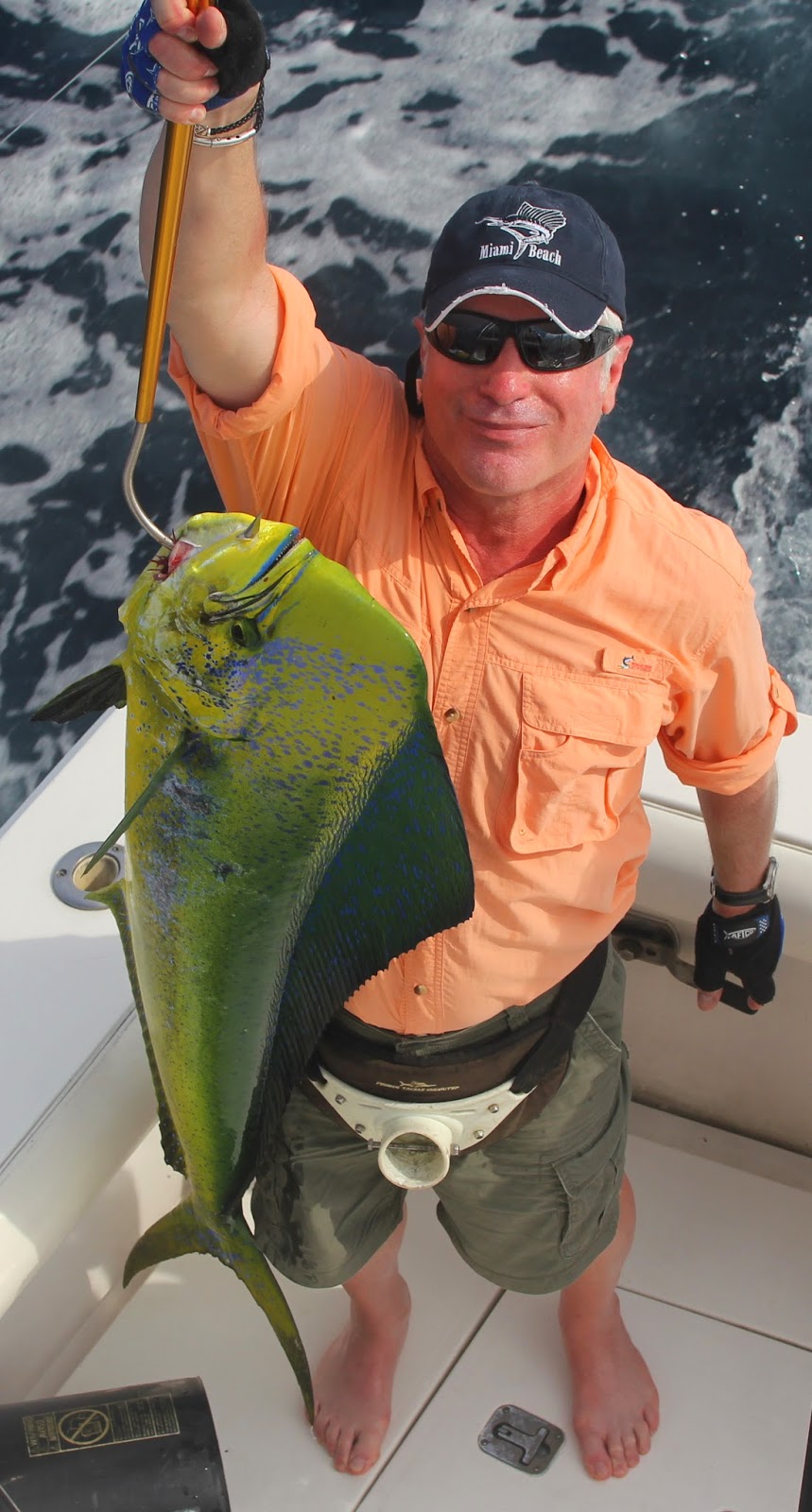 Jon with another big bull. 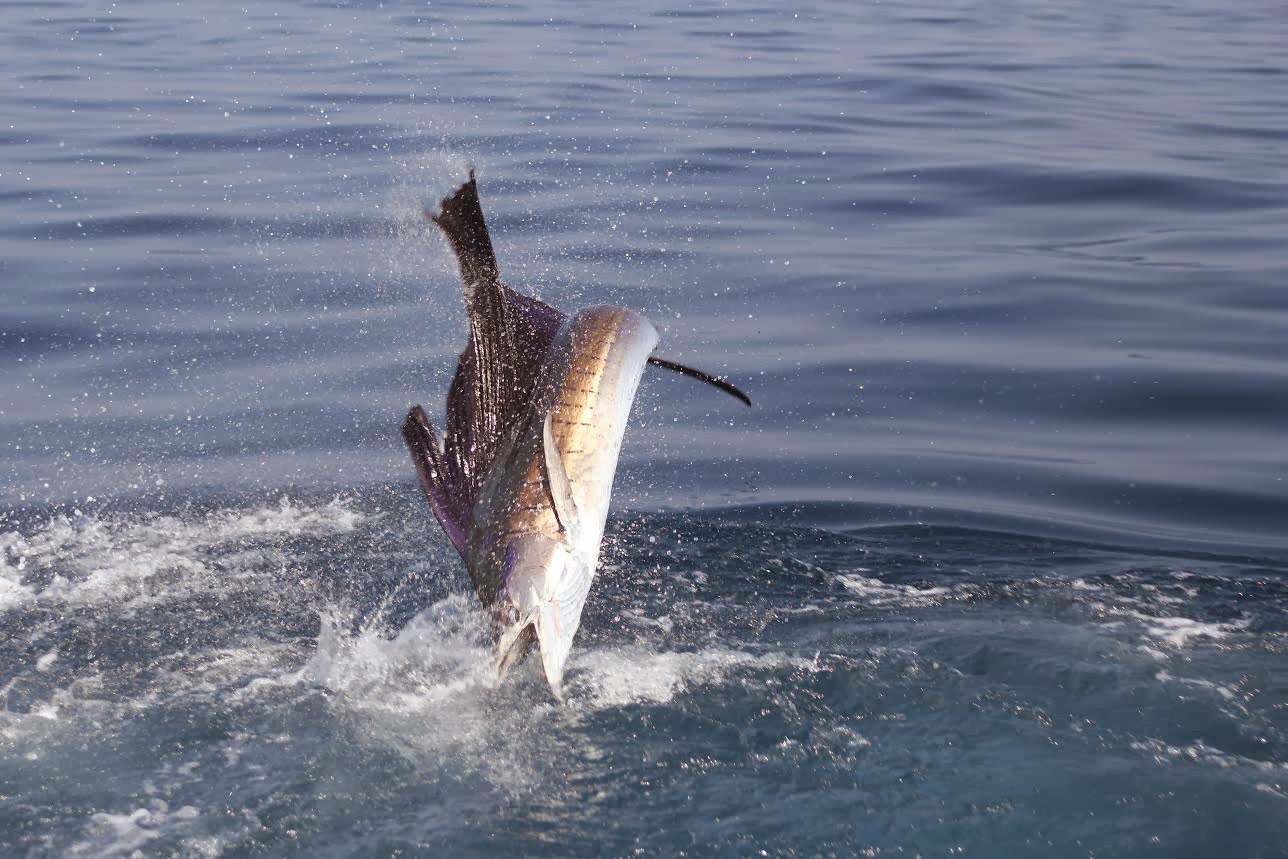 And an awesome shot by Yannick.
BRENHAM/DRAEHN GROUP 86 RELEASES 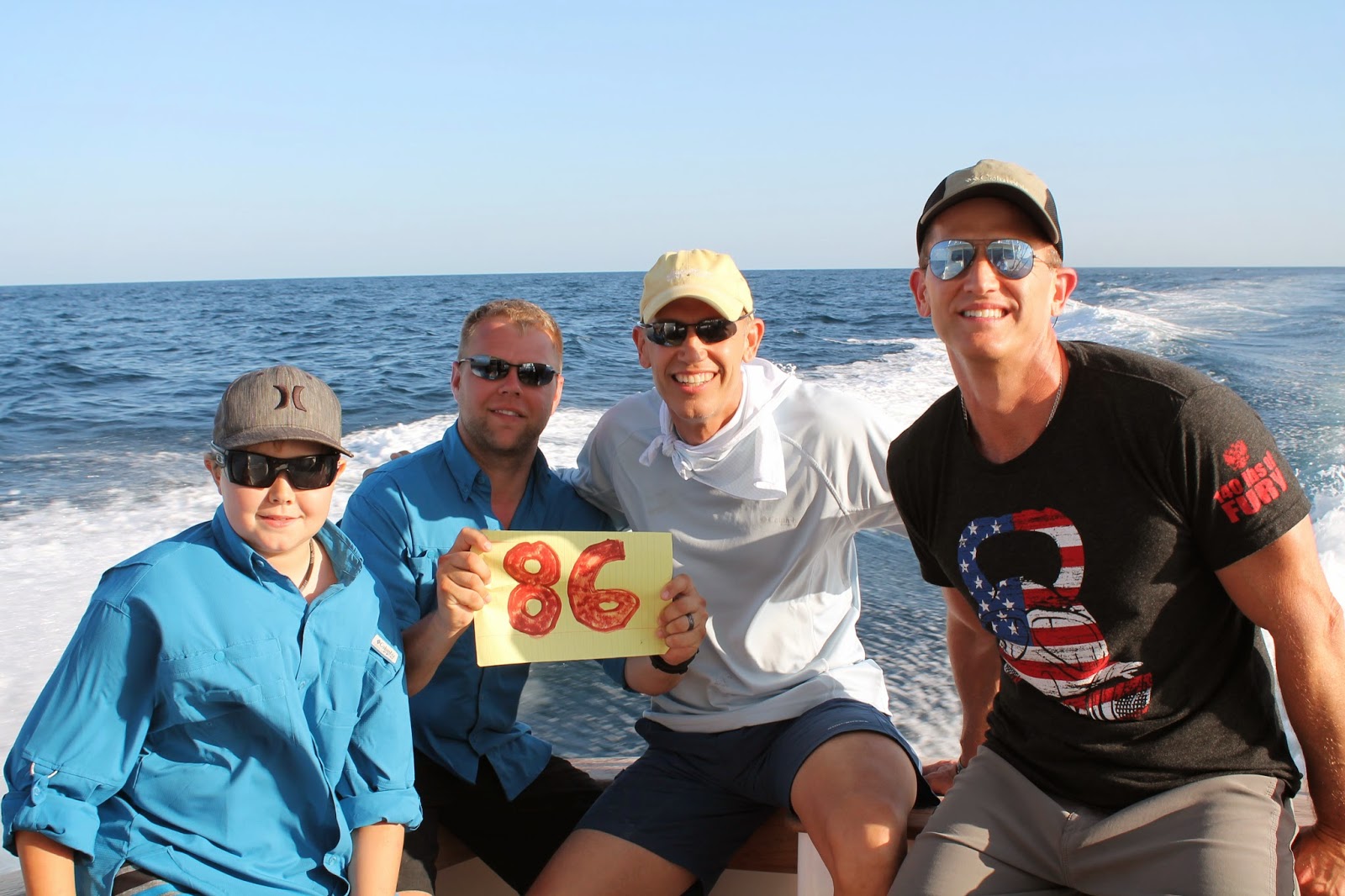 Colin Brenham, Jason Draehn, Matt and David Brenham.
Feb 14th-16th first timers to Guatemala from Texas we had father Matt and son Colin with brother David and brother-in-law Jason Draehn. What an introduction to billfishing for these guys! First day out we had the mates helping with pitching baits to some red hot sails and they released 34 from 40 bites. 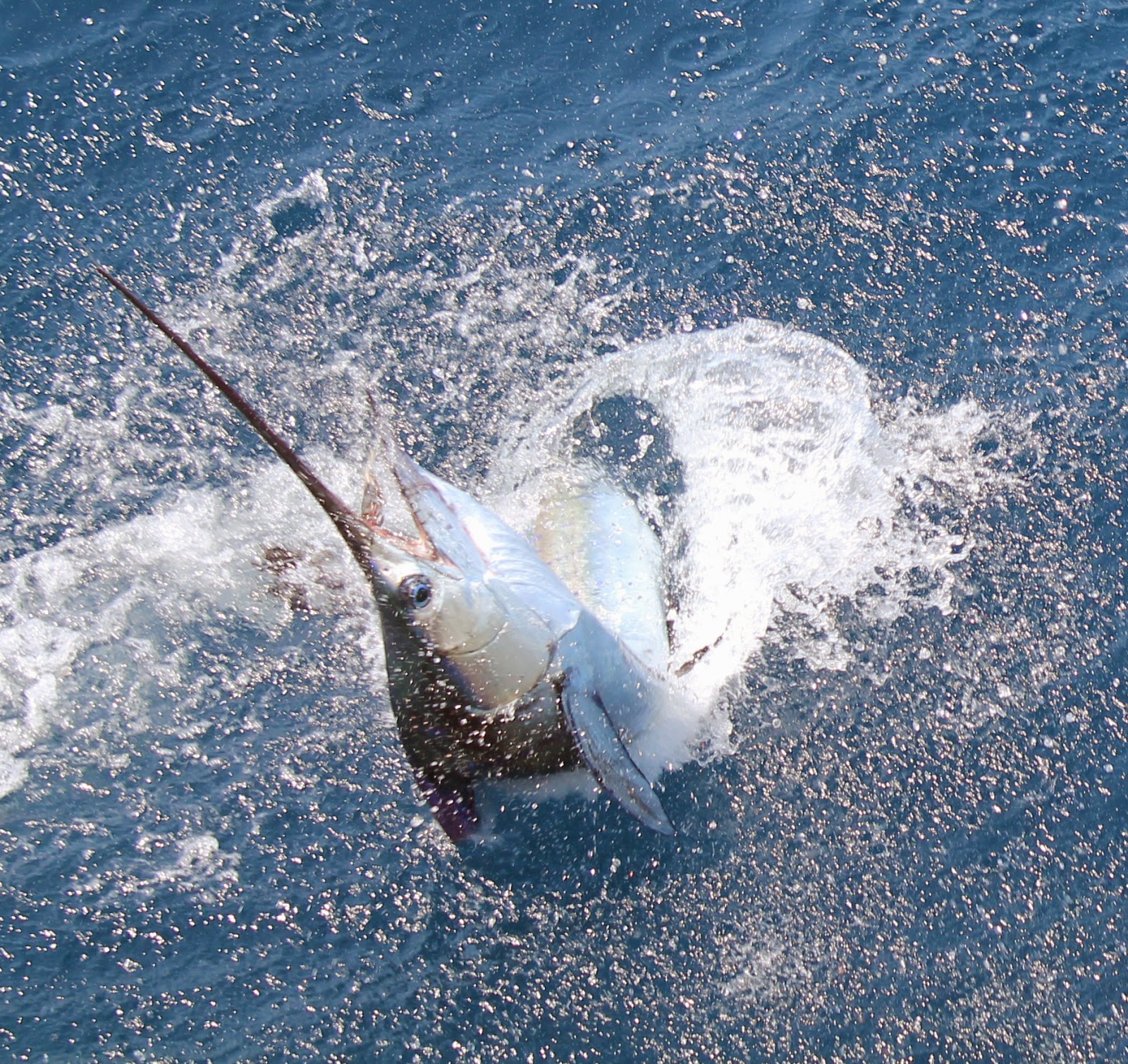 For the next couple of days it was a learning curve with plenty of practice and the guys did well. It is a technique using these circle hooks to hot billfish bites and takes some time though by the end of it they had it down and fished excellent with 52 releases from 78 bites over the next 2 days and 9 big mahi’s including this beauty for 12 year old Colin… 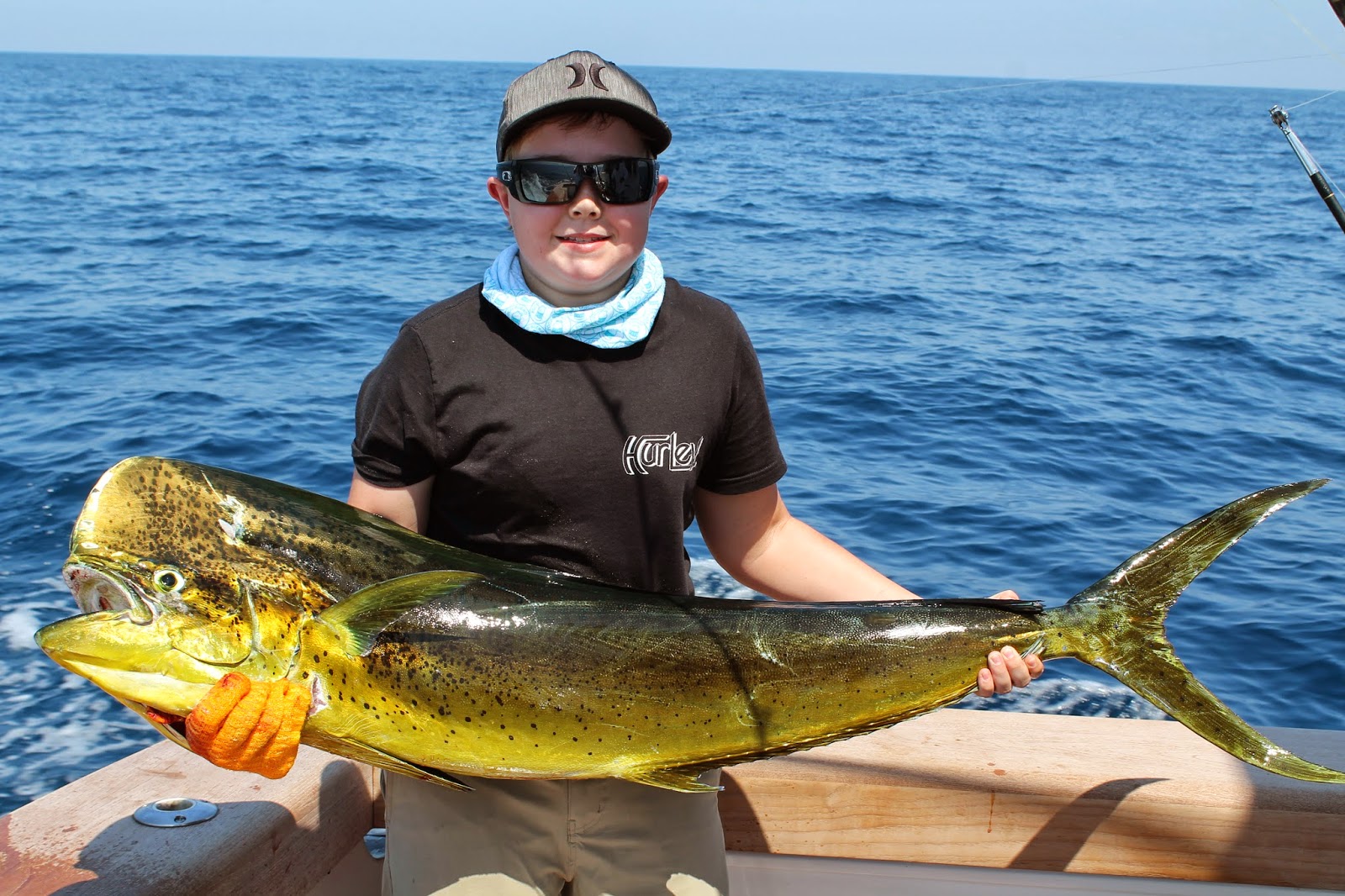 When these bulls get their heads down they can be tough, Colin did and awesome job.
BILL EASUM 41 RELEASES
Bill is a regular on the billfish circuit in Central America and has been coming to Guatemala for years now. Fishing aboard the Piragua Feb 14th-16th he released 41 sailfish on conventional 8lb and 12lb test and on the fly. We congratulate Bill on releasing his 2000th billfish during this trip AND his 100th billfish on the fly. That is an awesome personal achievement and a testament to his angling skills. Nice going Bill and we look forward to seeing you back here at the Oasis next month!!
DISHMAN, GOLIAS, MOORE, EQUIPO SANCOCHO: 28 RELEASES. 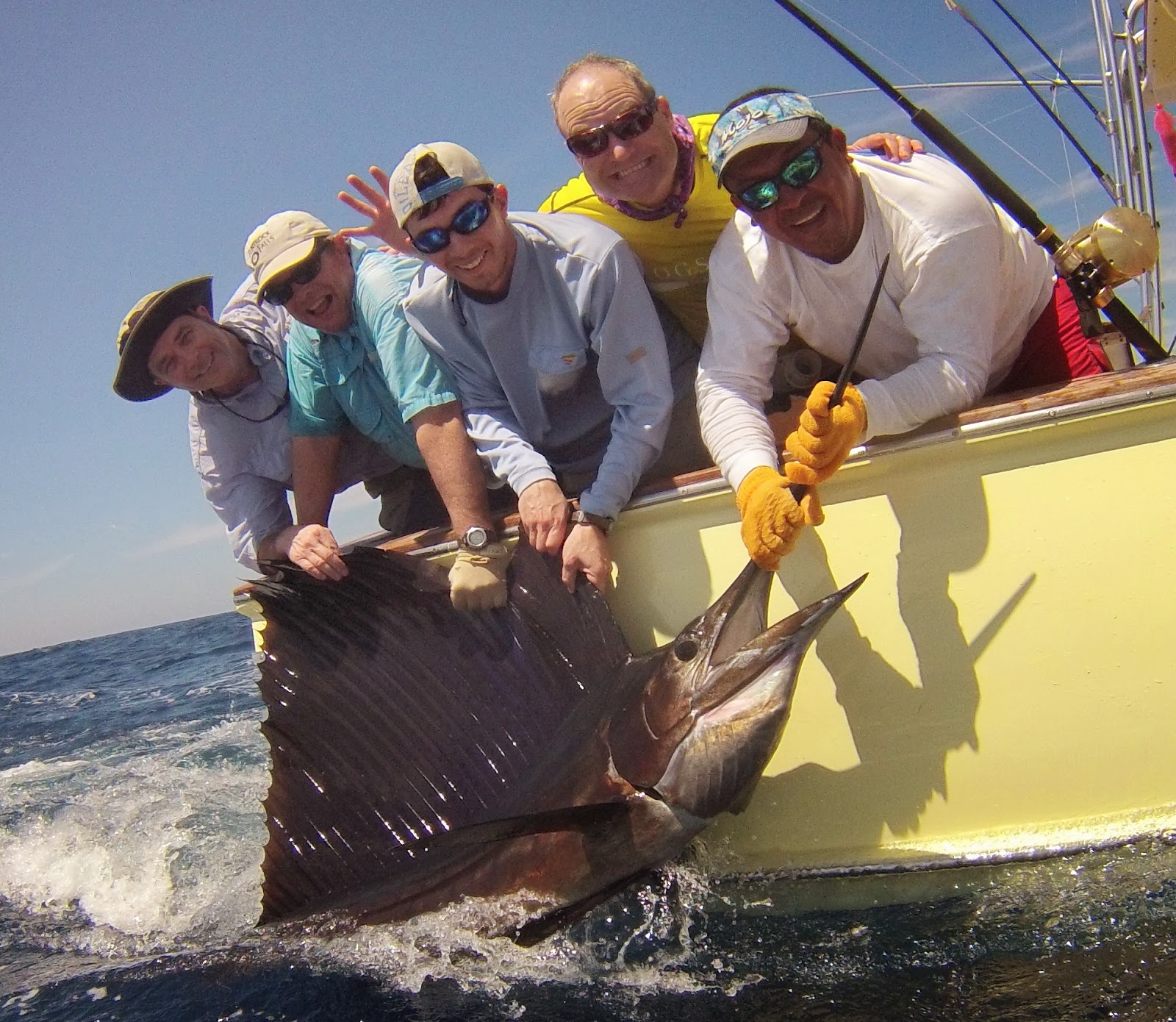 Joe, Austin, Lee and David.
Joe and son Lee Golias with Austin Dishman and David Moore from Beaumont, Texas fished Feb 17th and 18th with us on Allure II. The bite seemed to slow so we strayed from the fleet looking and still found some reasonable action out there with plenty of big mahi’s crashing teasers as well. Over the 2 days they released 28 sailfish from 45 bites which are still pretty good averages and boated a couple of tough bulls. The fish we were on definitely acted finiky and were tough to switch from the teasers to the baits and tougher yet too hook on the rigger baits! Good times all round though and a fun group to fish with.
BRUNELLI GROUP 34 RELEASES
From Rio de Janeiro, Brazil Luigi Brunelli fishing with good friends Mario and Santo are down here fishing on Capt Hook from Feb 17th through to 20th. As of the 18th they had released 34 sailfish and still have 2 more days on the water. We’ll up-date their fishing report in the next one though they have been fishing well and have enjoyed the amenities down at the Oasis with the food and staff getting special mention. The fishing speaks for itself!!! 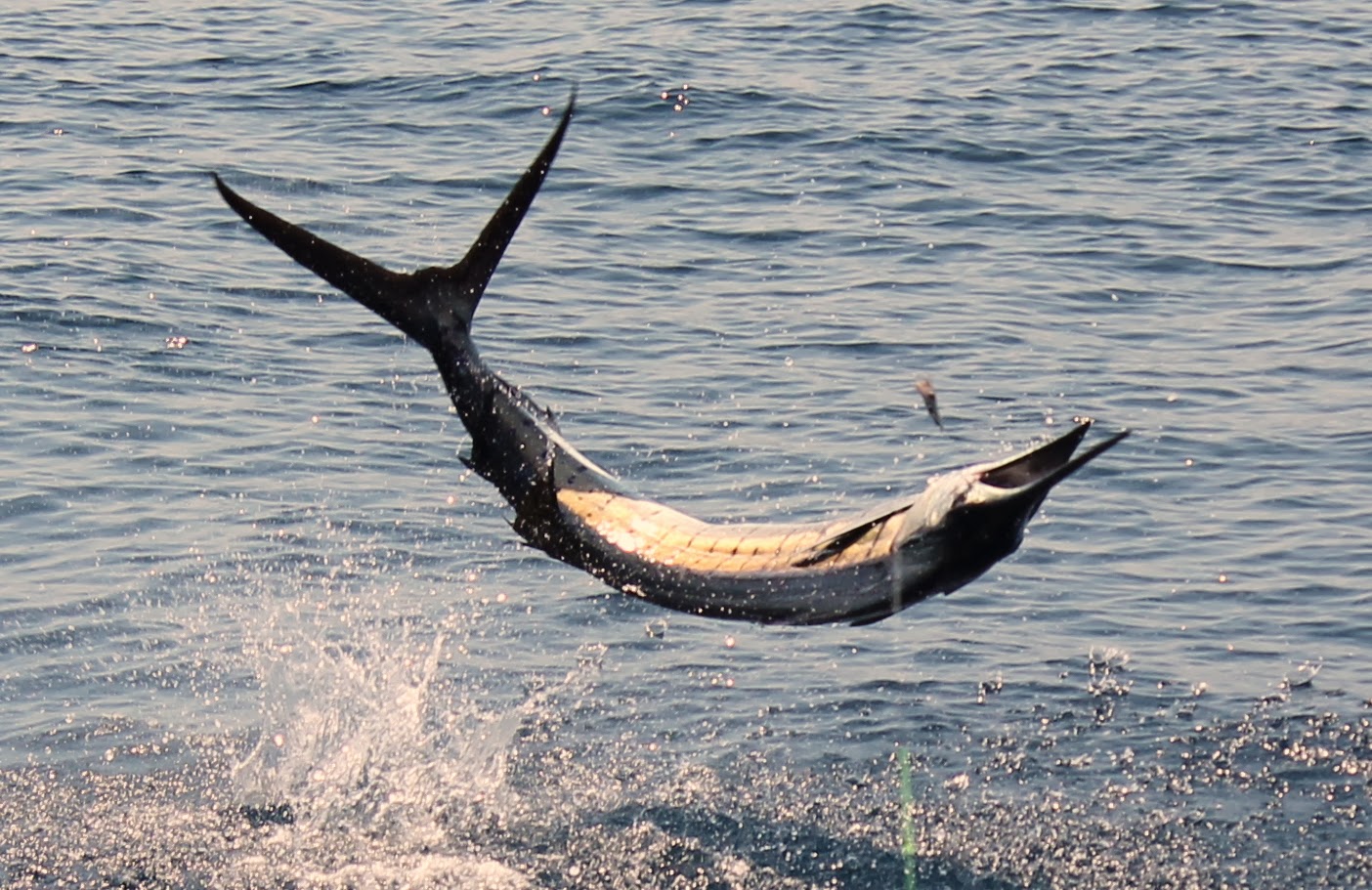 That is a total of 602 billfish releases in the past 12 days for our anglers staying at the lodge….A big body of fish and bait out there it has been an awesome time introducing new anglers to this incredible fishery and having regulars back in the thick of it. It’s always fun teaching and watching these hot fish get teased to the transom, pitching baits and getting bites right in the anglers face! We still have some dates available in April and through to May and onwards though these dates are starting to go. Our favourite time of year is April though August with variety being the key, plenty of sailfish around, the blue marlin bite heats up and throw in big mahi’s and tunas to mix it up for the table. Get in touch with us here to experience billfishing at its best and don’t forget to use Eagle Claw 2004EL series hooks for healthy releases.