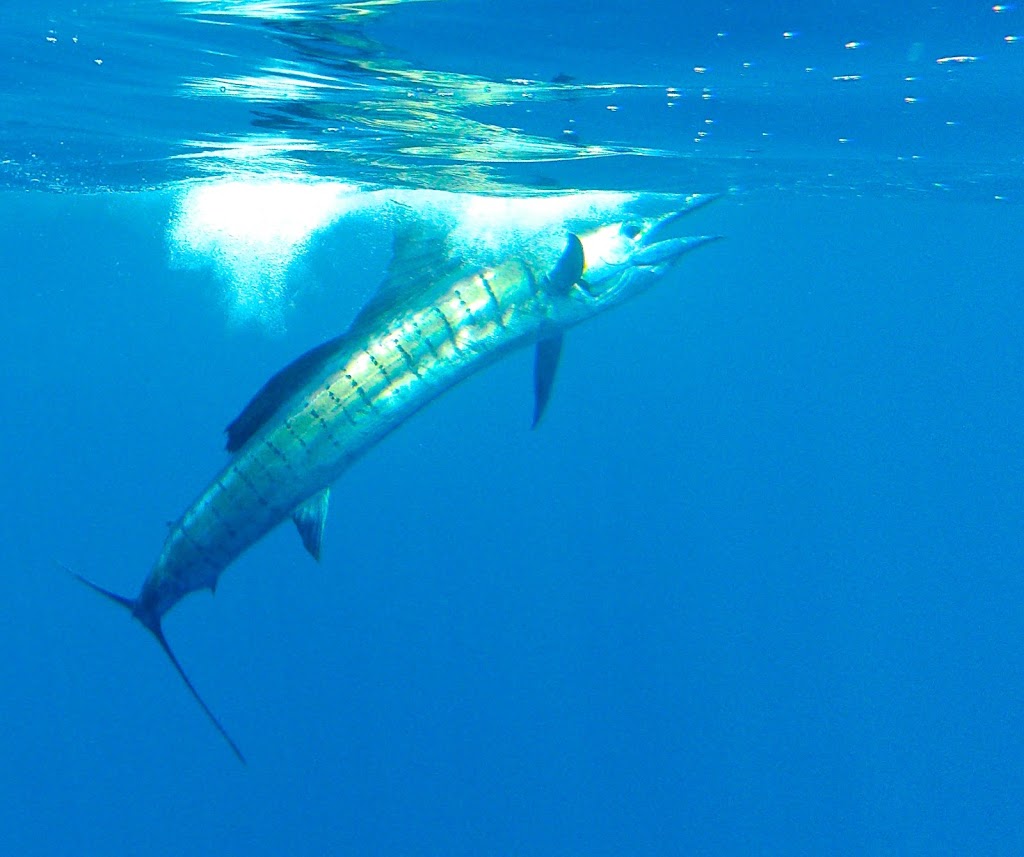 Sailfish about to be released… 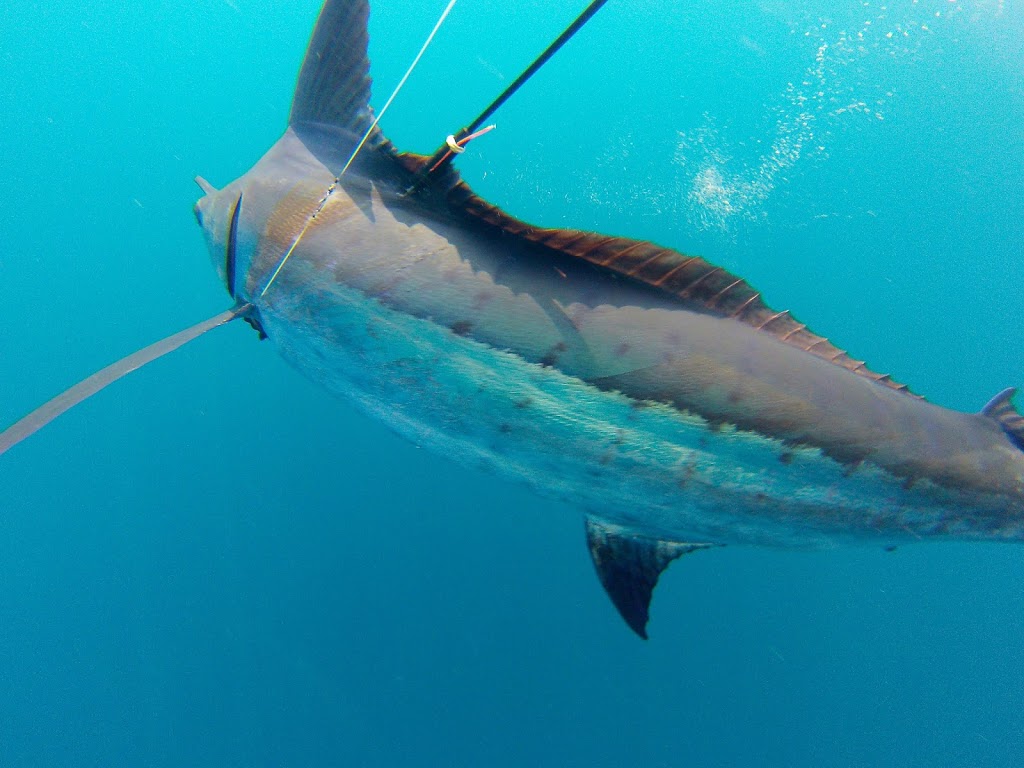 Blue marlin, tagged and released…
Allure II between November 1st 2014 and October 31st 2015 released 1543 billfish over 123 days of fishing at an average of around 13 billfish releases per day! What a season it was, eclipsing the previous where we released more with 1636 though fished 146 days to achieve it at an average of close to 11 per day. Also, we fished far more days on the fly this past season than the previous. Just goes to show how good the fishing was and it is continuing on…..
This November has been excellent fishing with boats averaging high teens, and up to 20-30 releases a day as well as consistent blue marlin action, the welcomed presence of stripeys and tunas to about 70lbs. November again proving to be an outstanding month to get down and fish Guatemala!! 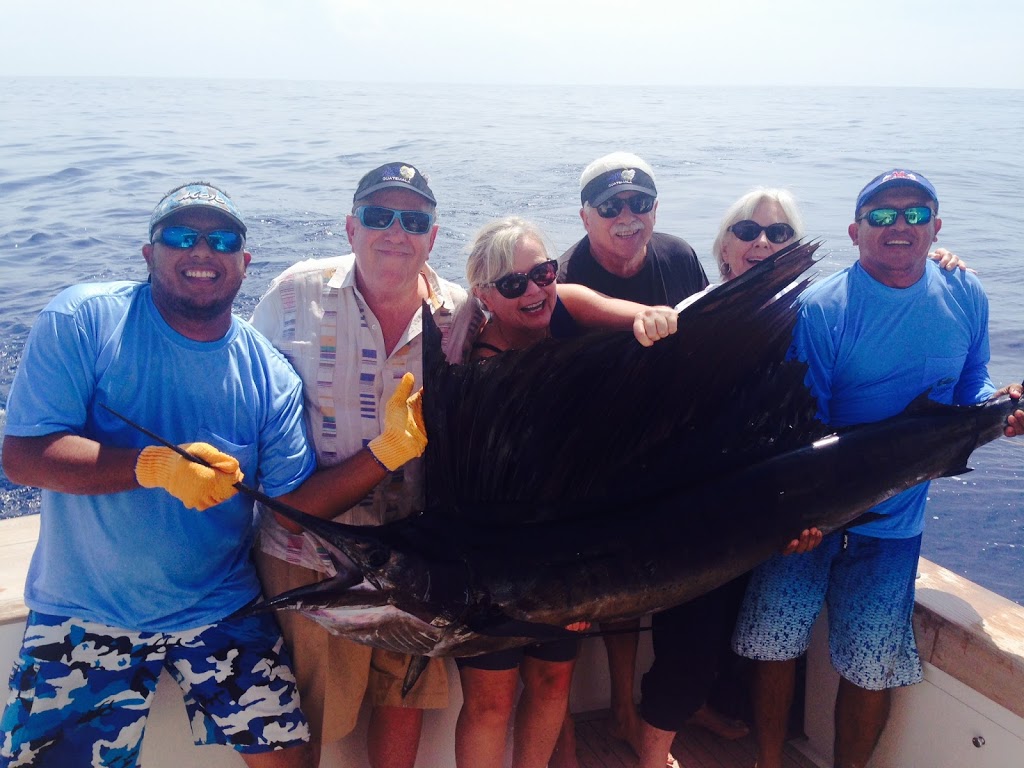 Terry Atkinson & Kathy Taylor with Bob and Leslie Wilson
November 6th we hosted the above group from San Francisco, California. Here in Guatemala for the official opening of the new Antigua International School, AIS they opted for a short day on the water before the official Founders Day ceremony on Saturday. With a busy schedule for the crew we ended up with only one and half hours of actual fishing time on the water though they all had a blast in that short time. First fish of the day hot on the short left teaser was a blue marlin of about 200lbs, we got the bite on the mackerel, came tight and the fish came greayhounding at the boat, unfortunately throwing the hook. Soon after we released 2 sailfish from 4 bites with Leslie capturing this great shot on her i-phone: 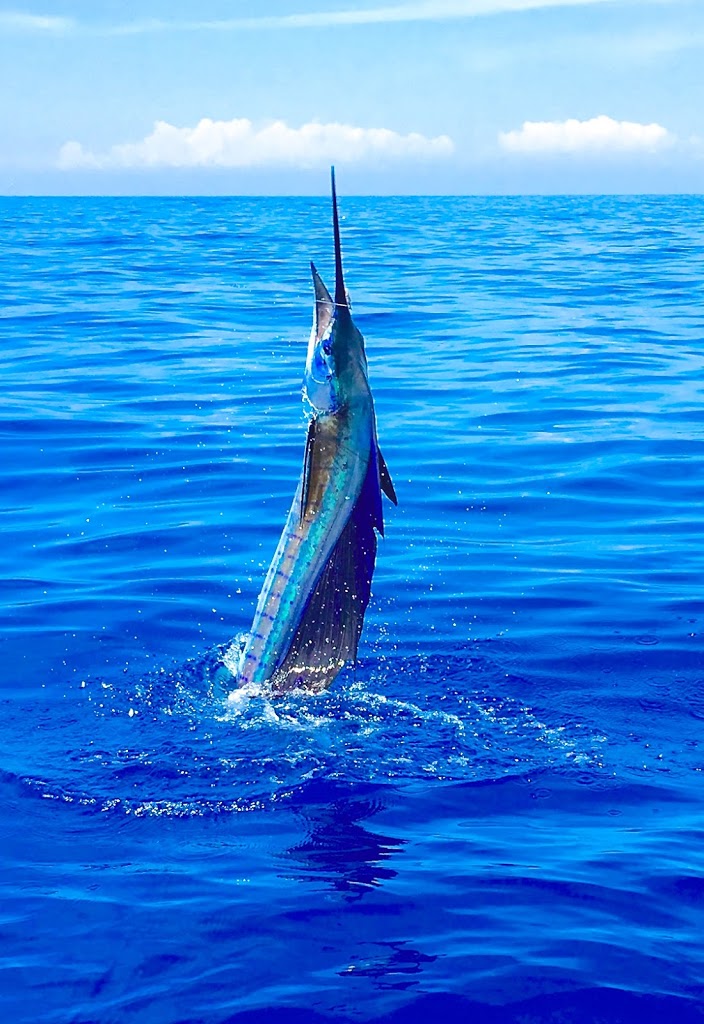 Beautiful colors…
The whole community here in Antigua thanks all the donors for their generous support and to the founders who with their endless hard work have made made this spectacular new campus a reality here in Antigua. 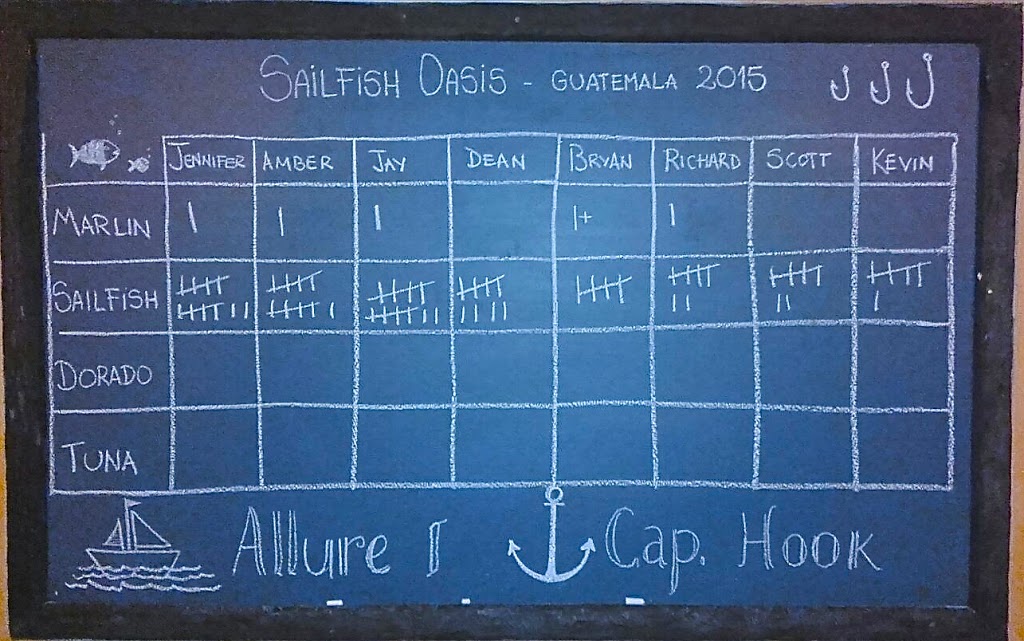 The blackboard at the Lodge after 2 days of offshore action.
Nov 19-21 was a spectacular weekend of fishing down here in Guatemala with guests at the Oasis fishing aboard ALLURE II and CAPT HOOK releasing a total of 75 sailfish, 4 blue marlin, 3 striped marlin, 5 tunas to 50+lb and 4 rooster fish!! That right there is an incredible weekend on the water…
On ALLURE II we hosted Dean and Jennifer Pfeffer and Jay and Amber Walters all from Houston, Texas for 2 days of offshore fishing and a short morning of inshore fishing for rooster fish. Our first day out started with well with steady action through to midday and sailfish releases for all. 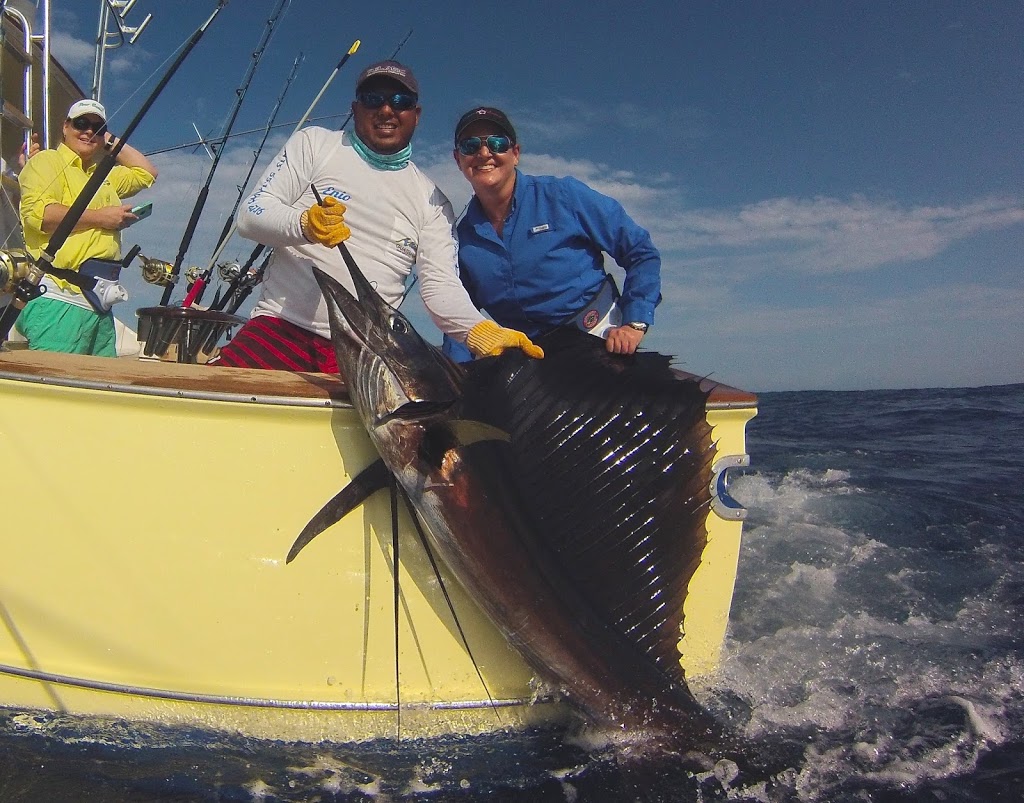 Jennifer with her sail 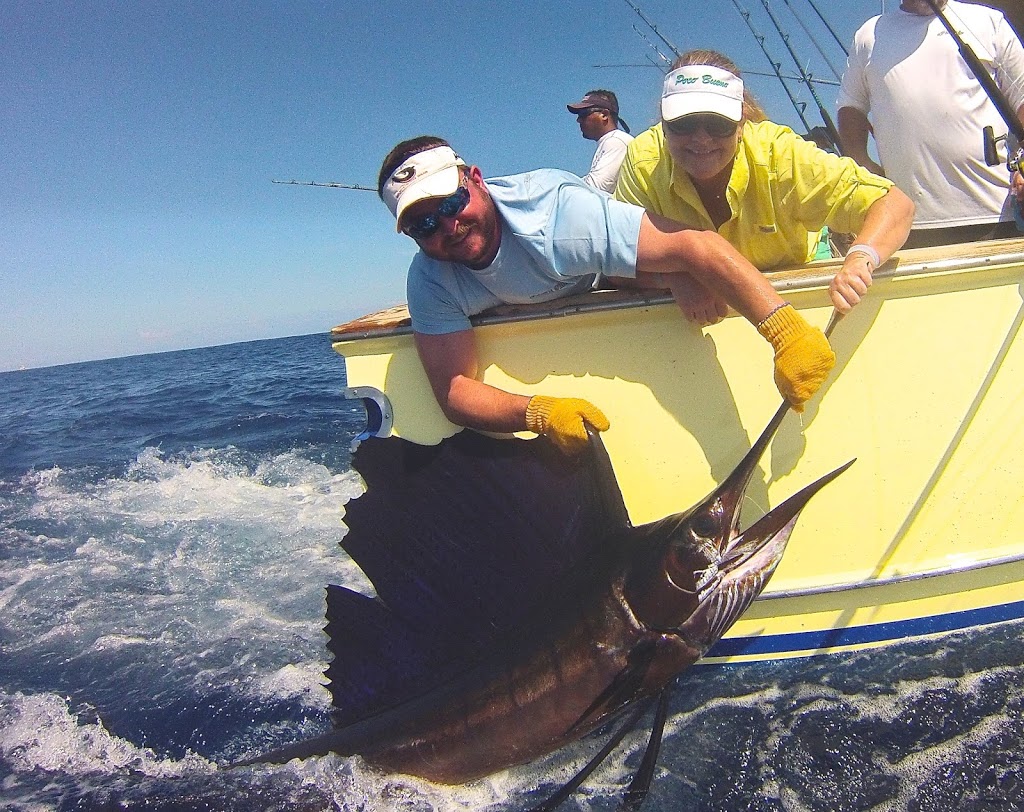 And Amber with hers..
Then right on midday we raised a double header, a sailfish and a small striped marlin of about 75lbs hot on the teaser, Amber got the release on the stripey and Jennifer released the sail. Soon after we had a blue crash the teaser though disappear. It wasn’t long though before we had another double header in the spread, another sailfish and a bigger striped marlin of about 110lbs. Jennifer was on stripey getting the tag in on the stubborn fish on the light tackle while Jay got the release on the sail. 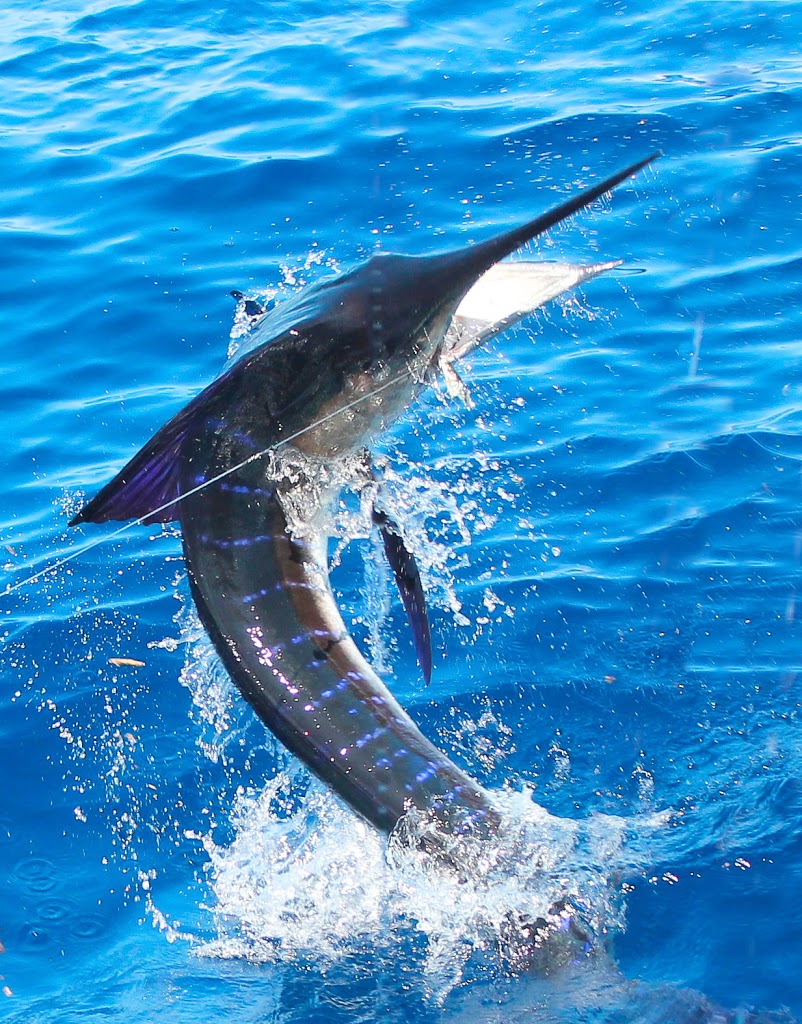 Jennifer’s stripey.
The afternoon slowed down some though our second triple header late in the day helped get us to 19 sailfish releases from 29 bites and 2 for 2 on striped marlin topping off an excellent day on the water… 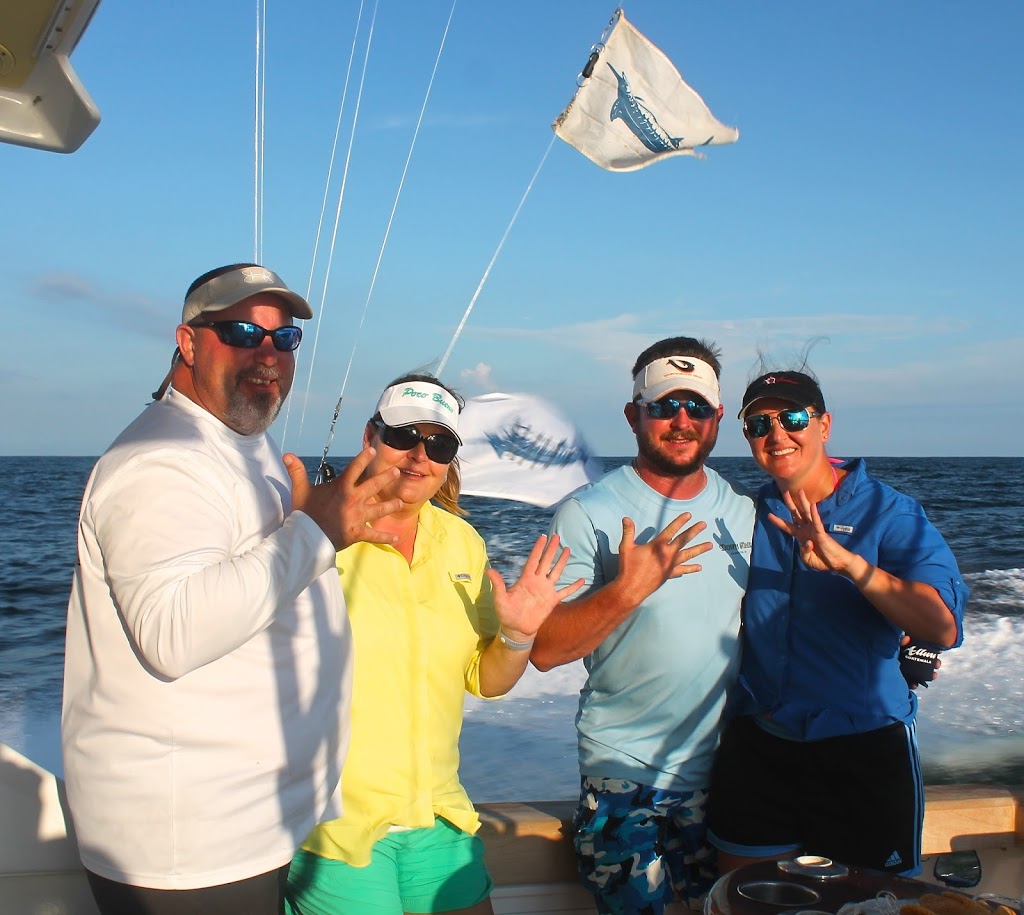 The ride home….
The next day the bite heated up some with consistent action right through the day including 5 double headers plus a triple released along with singles and sancocho’s. We raised another blue that didn’t stick around for too long and right before midday Jay got the bite off another aggressive striped marlin off the bridge teaser. 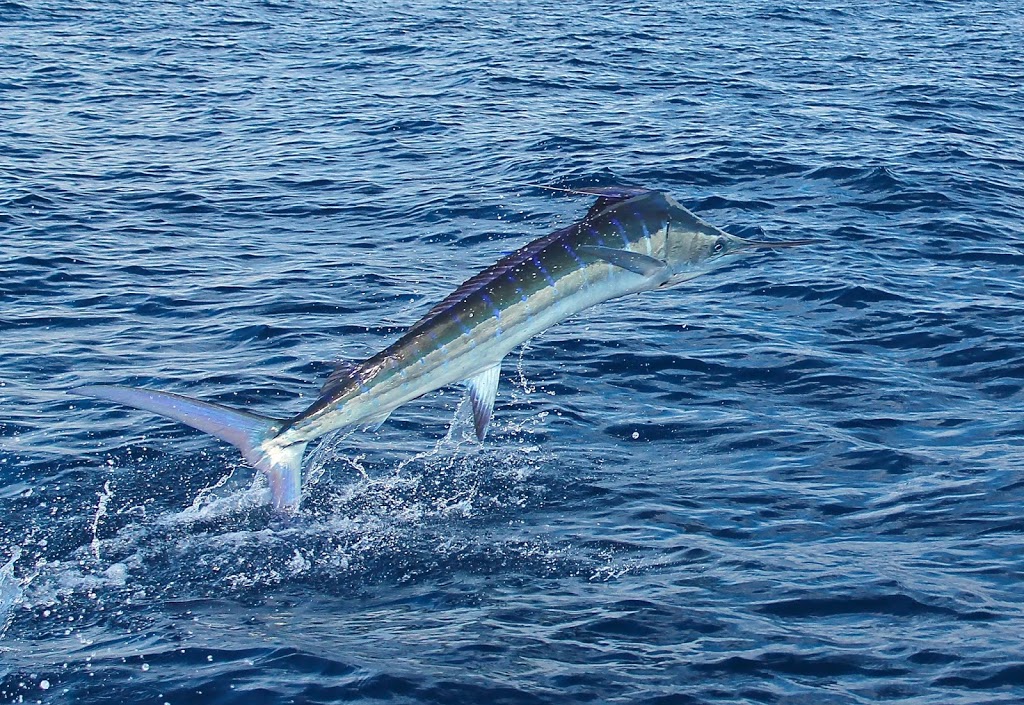 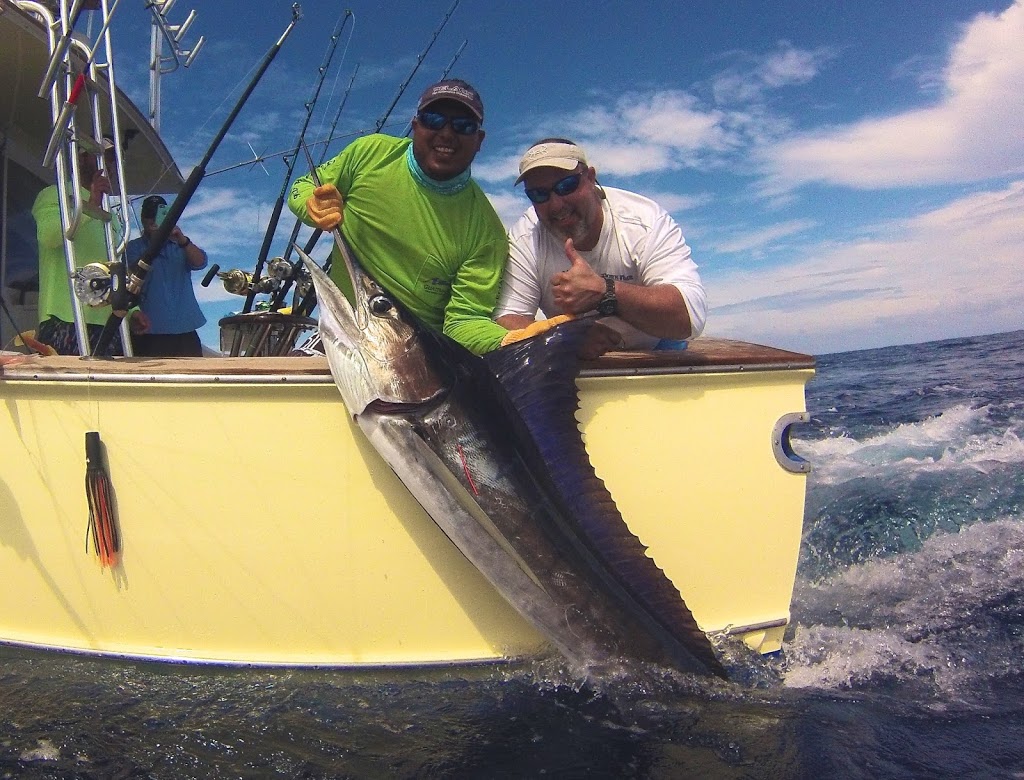 Tagged and released for Jay.
The crew ended the day with 25 sails released from 37 bites and the one striped marlin….helluva day, helluva 2 days!! 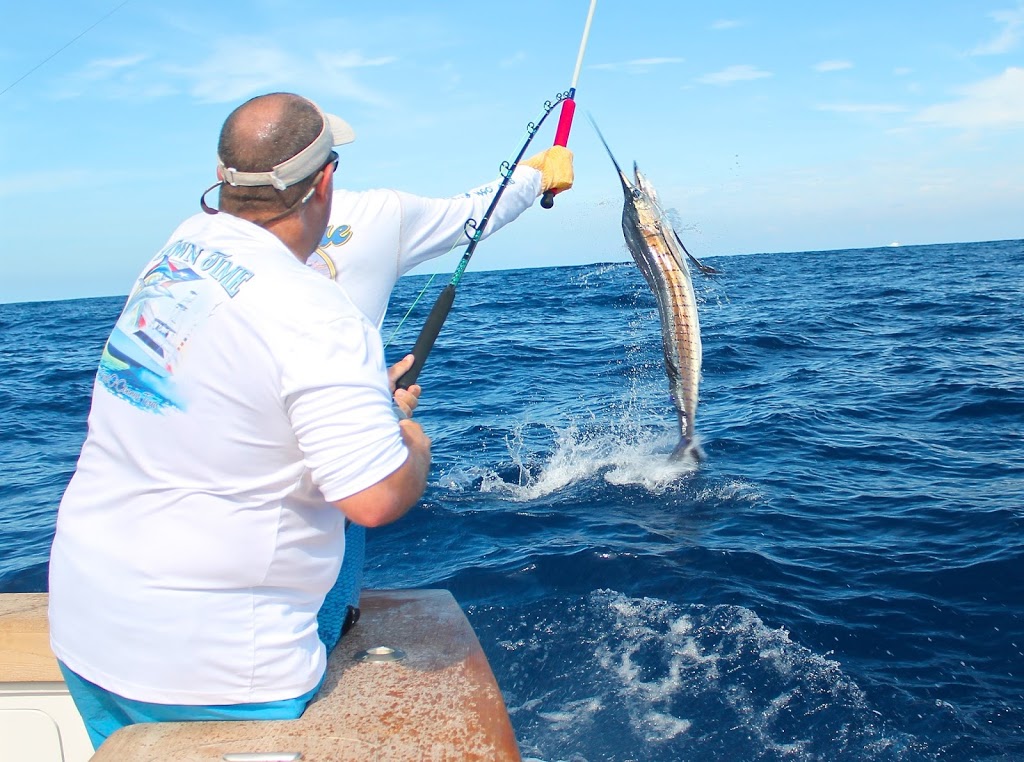 For their last day they opted on a half day of inshore fishing targeting rooster fish as none had caught these tough fish before. We finished their trip achieving a rooster for each of them releasing 4 from 8 bites along the beach. 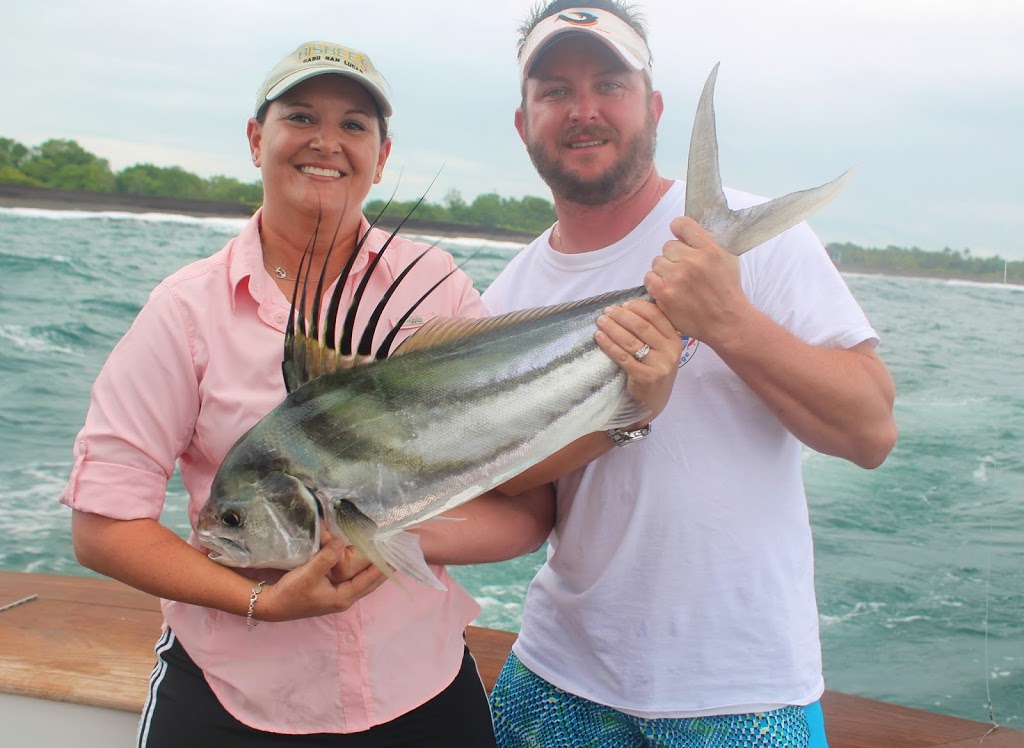 Jennifer and Dean with a typical sized rooster on the light tackle.
Good time with a good crew and we’re looking forward to seeing them back here in Guatemala again, this from Jennifer:
Capt. Kiwi, thank you so much for taking us out fishing the last 3 days. We had a blast and are already talking about coming back. Everything from the fishing to the lodge to the food was absolutely amazing!!! I will definitely recommend this place to anyone who may be interested in visiting Guatemala. Thank you again for a trip of a lifetime!!!Jennifer Pfeffer 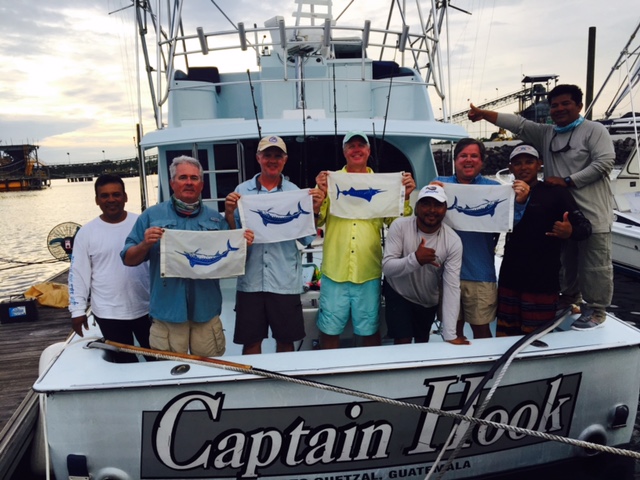 Kevin Kavanaugh, Richard Geriner, Scott ‘Dorado Ice’ Stropp and Bryan O’Dell
Nov 19-21 the crew above were out there and enjoyed the same excellent fishing aboard Capt Hook. Their first fish of the first day was a stubborn blue marlin which took them the best part of an hour and a half to get the tag in and release, and from there on they were in on the sails releasing 9. Next day they had the hum releasing back to back triple headers on the sails and cruising their way to 16 releases by lunch. The bite slowed, they put out a small bonito skip bait on the 30lb test and got the bite out of a 350lb blue….. 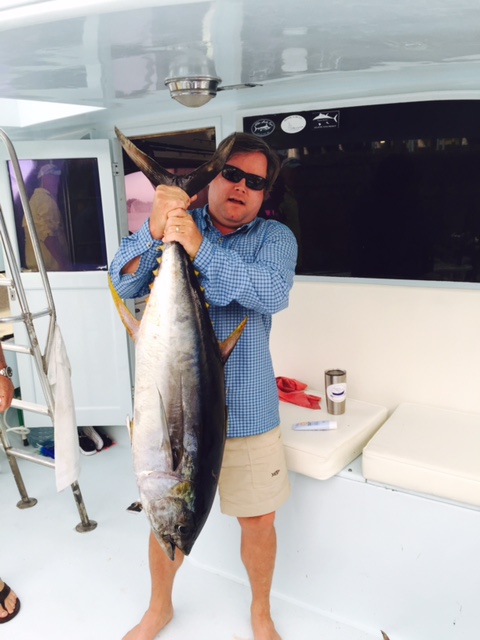 They left the bite to the east their last day out running wide to the west after hearing reports of tunas out there and were rewarded with an epic day….Finding spinners and life they released 2 from 2 blue marlin, 6 sailfish and boated 5 yellowfin tunas to 50+lbs.
Bryan with a typical sized tuna…
What a day, and what a trip, releasing 4 blues from 4 bites, 31 sailfish and boating 5 nice tunas over 3 days of offshore fishing. Way to go guys. This from Kevin:

My third time to Sailfish Oasis and as always, the absolute best experience to be had. Many thanks to the staff, Jose, Alex, Freddy, Karina, Daisy and Eddie. We will be back!

We’re out there again fishing tomorrow and looking forward to it…..if you want to get amongst this level of quality fishing, contact: