ALLURE II, BACK IN THE WATER, CATCHING FISH…… 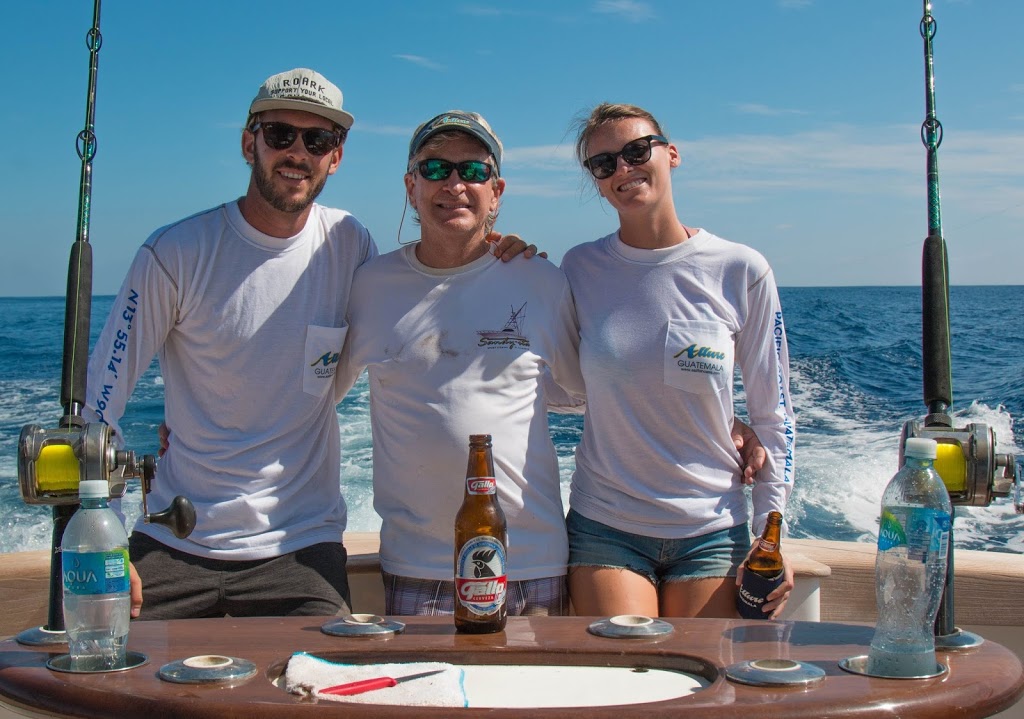 Garrett Gossett, Hill Dishman and Rosie Gossett
October 13th and 14th. It was hectic though we got the boat back in the water late Saturday afternoon and got it rigged and ready to fish Tuesday the 13th with Hill Dishman and Garrett & Rosie Gossett. Friends of Hill, Garrett and Rosie are on a road trip from California to Tierra del Fuego and hooked up with Hill here while passing through Guatemala. It was a great shakedown to get ready for 2 groups coming later in the week and a chance to test out our fully refurbished rods and reels. After a slow morning looking around we got into a pretty good bite later in the afternoon of our first day out all about 14NM from the dock. 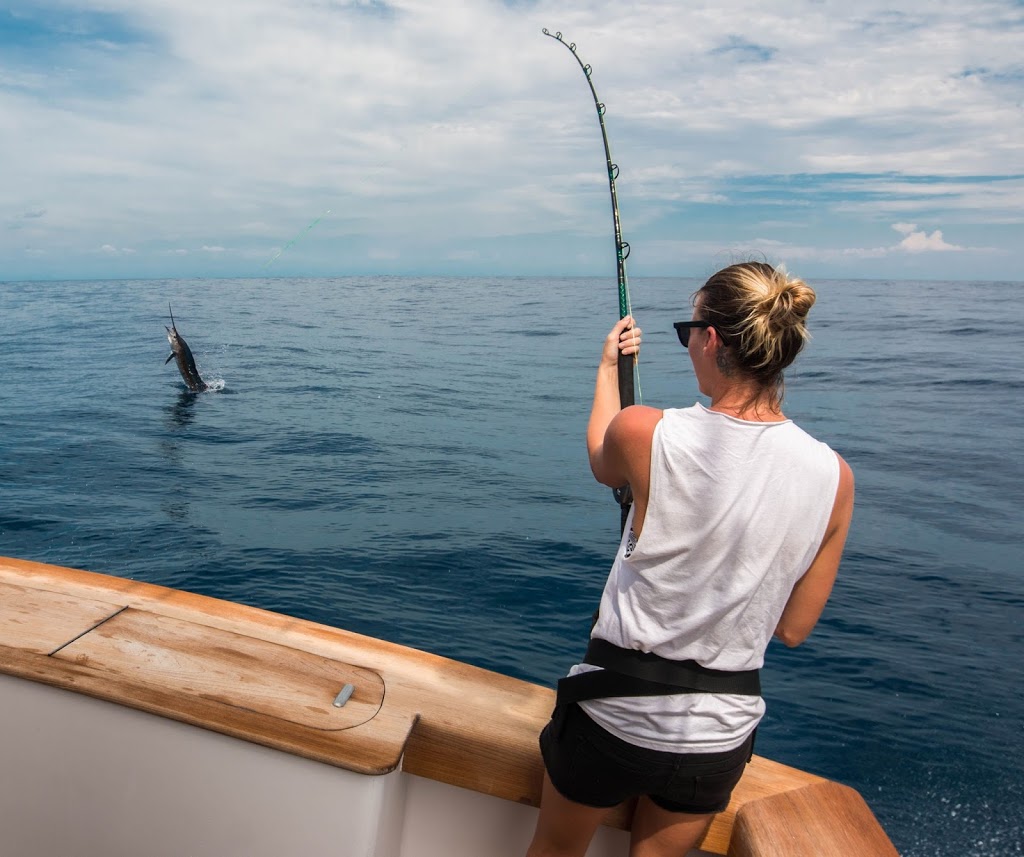 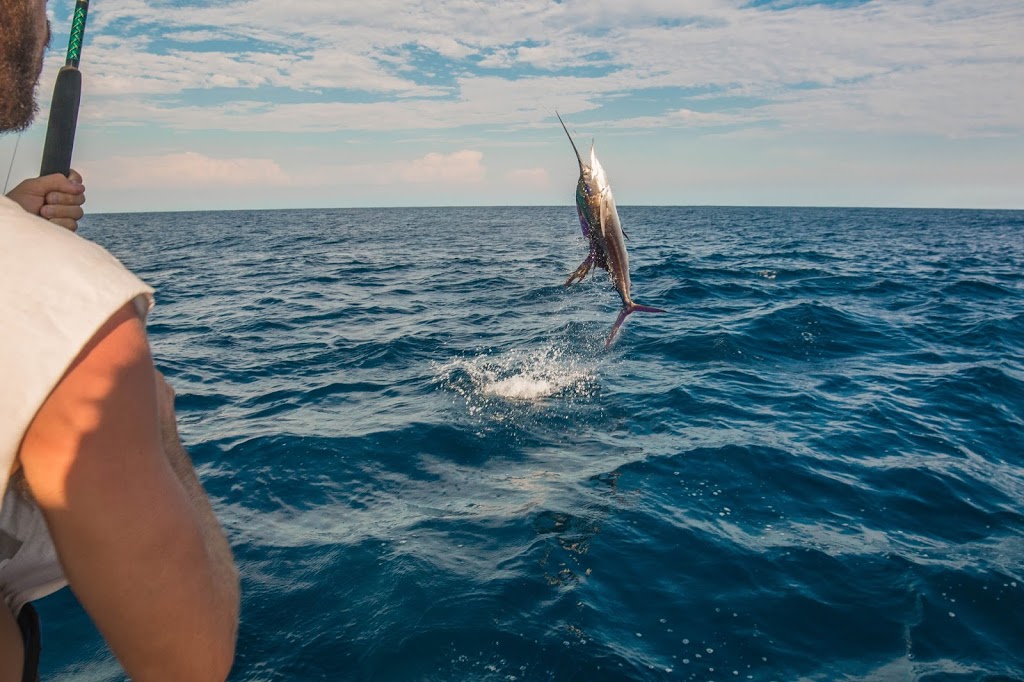 And Garrett in on some feisty sails
For the day we raised 18 sails and released 14 from 17 bites. Pretty good since the action didn’t really start till more than an hour after lunch.
Next day out we were back in the same area and it wasn’t long before we had a blue pushing water behind the rigger bait, though it did not eat. As we worked our way east we raised another blue about an hour later, this fish also came up pushing water on the rigger bait. Hill did a great job teasing it in on the trolled ballyhoo with the fish making greyhounding jumps chasing the bait while the mackerel was pitched. Good teamwork on this one, the ballyhoo was cleared and the marlin switched for an explosive bite on the mackerel and Garrett was hooked up to his first blue marlin. 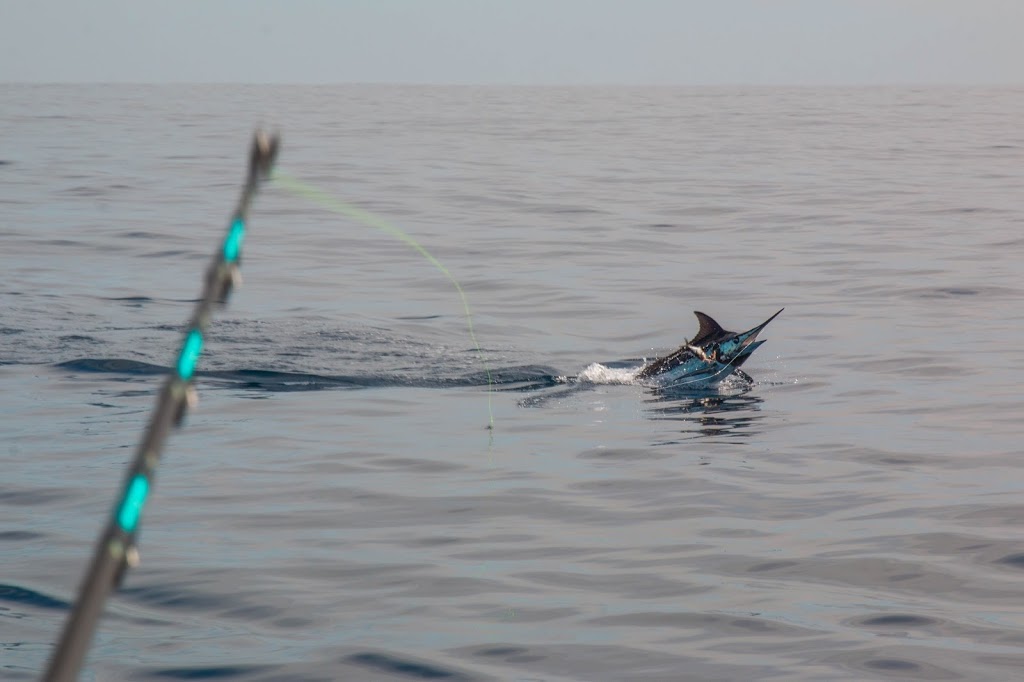 Nice way to start the day Garrett!
It wasn’t a big one, though a beautiful fish of about 120lb’s, tagged and released. From there on in another boat was having some luck to the west in greener water so we worked that way releasing 4 from 6 bites on the sails and boating a good lunch sized mahi. 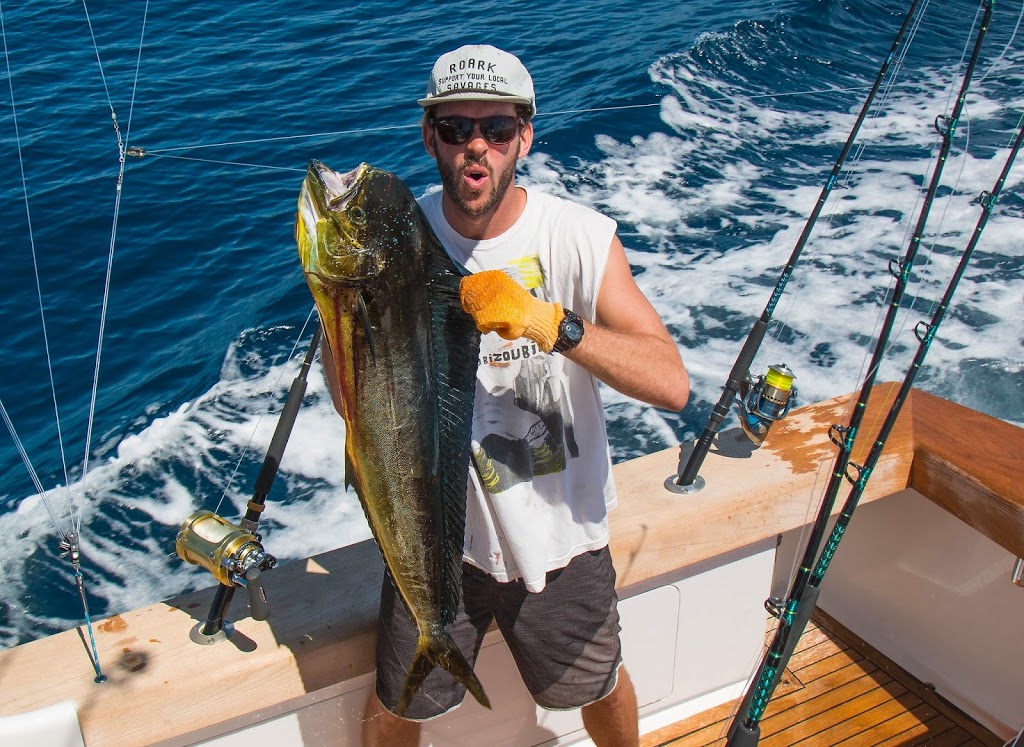 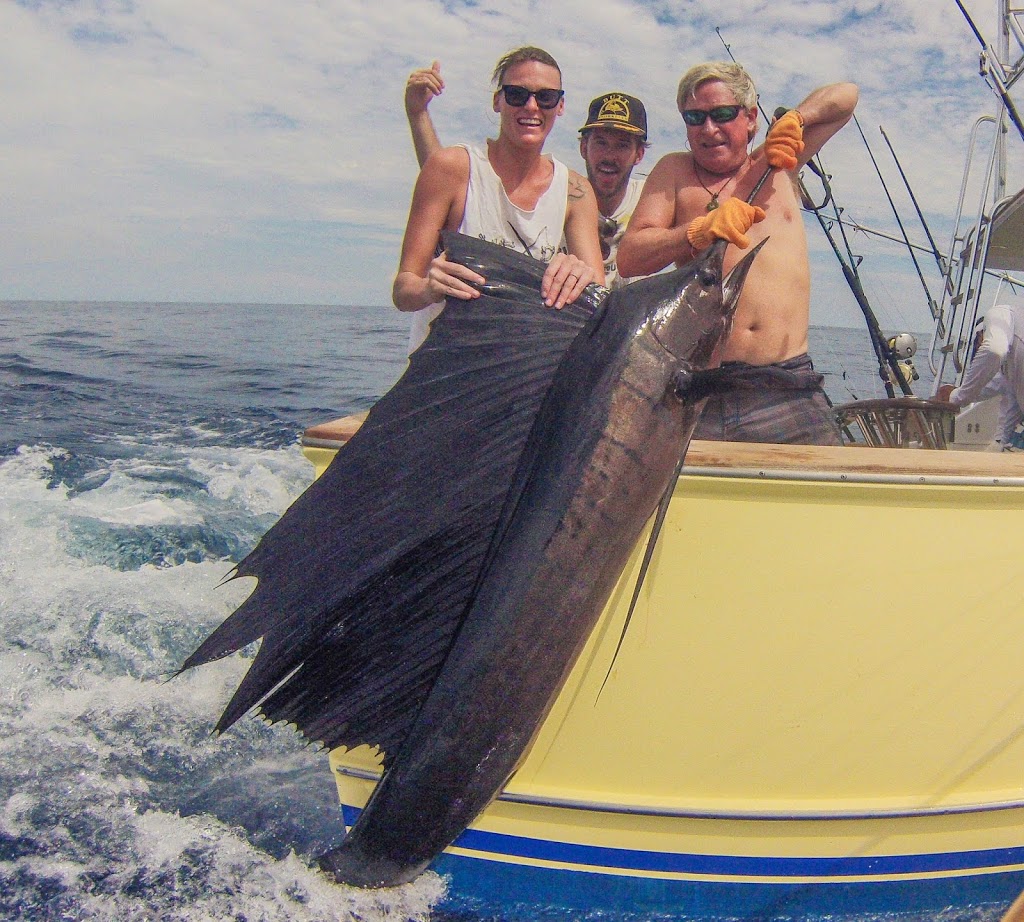 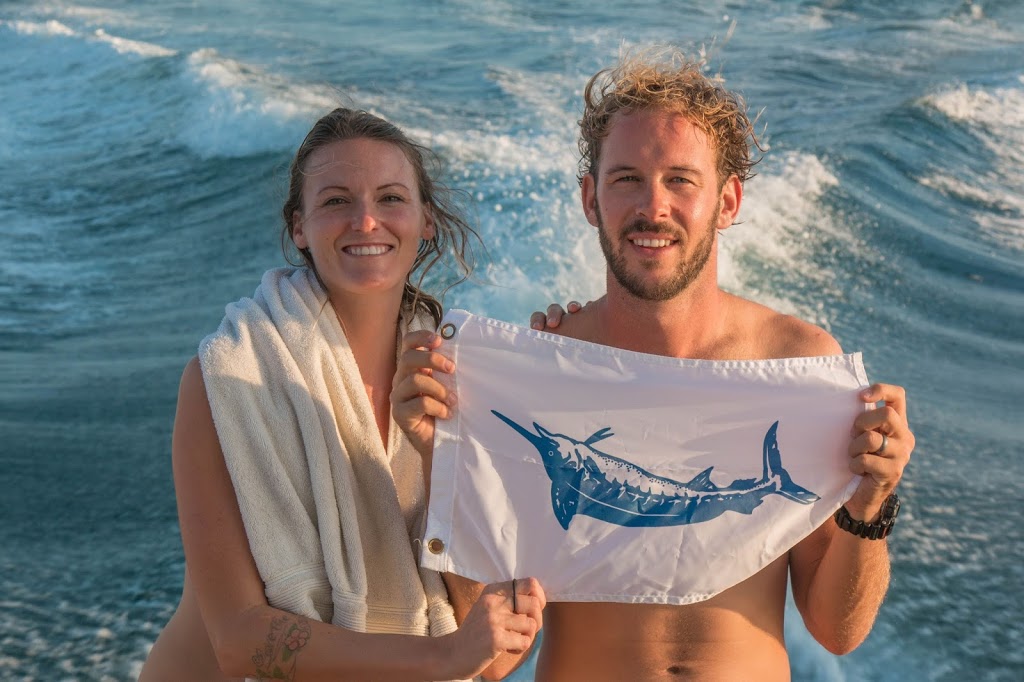 On the way home.. 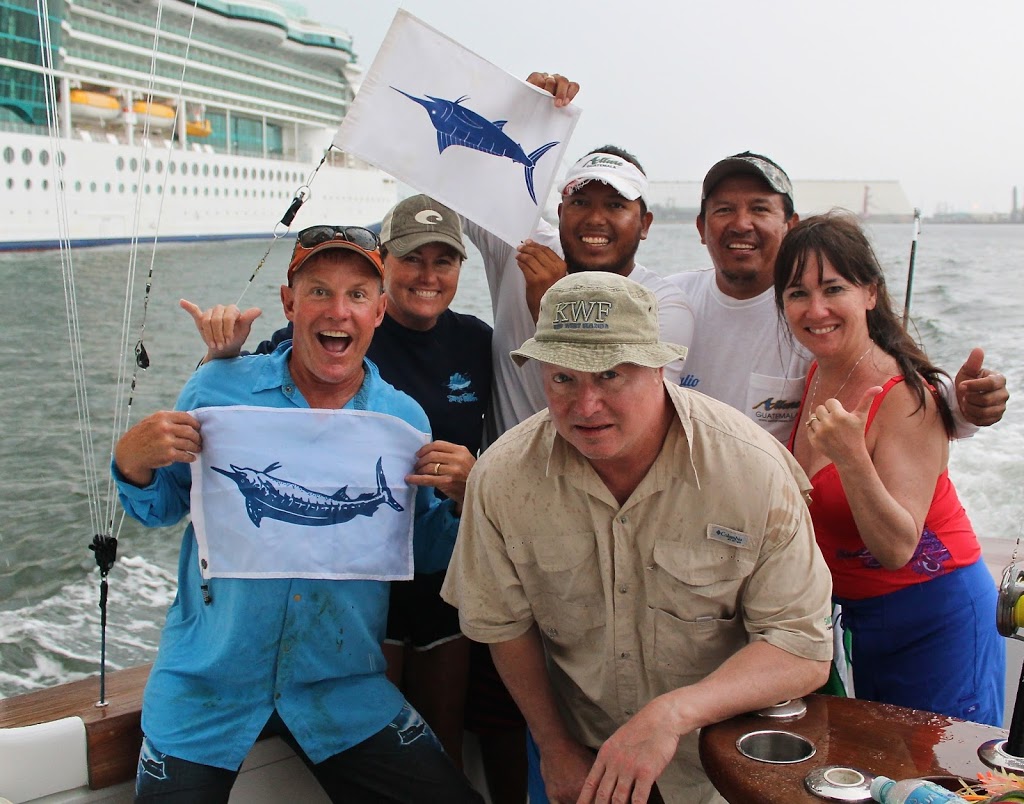 Mark and Diane McHughs with Alan and Debra Funderburg.
Ocotber 15th through 17th we hosted the above group 3 days on the water. good company, good energy and super keen fisho’s mean nothing but fun on the water no matter what. While down below doing the briefing we got back into the area to the east and some sail action. Fairly soon after we raised our first blue for the day, another fish pushing water behind the rigger bait, we got the bite though unfortunately missed it. Working the area inshore we had another bigger blue come in hot on the long teaser, a great switch and bite on the pitched mackerel had Diane hooked to solid blue pushing the 400lb mark, a nice fat fish that went crazy once it realized it was hooked…. 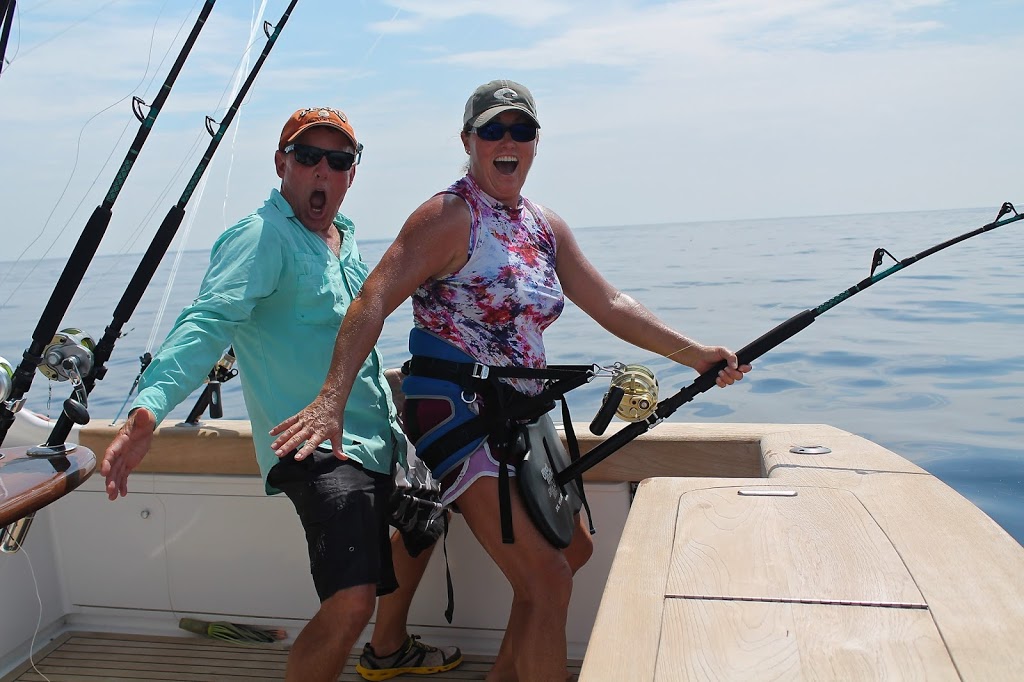 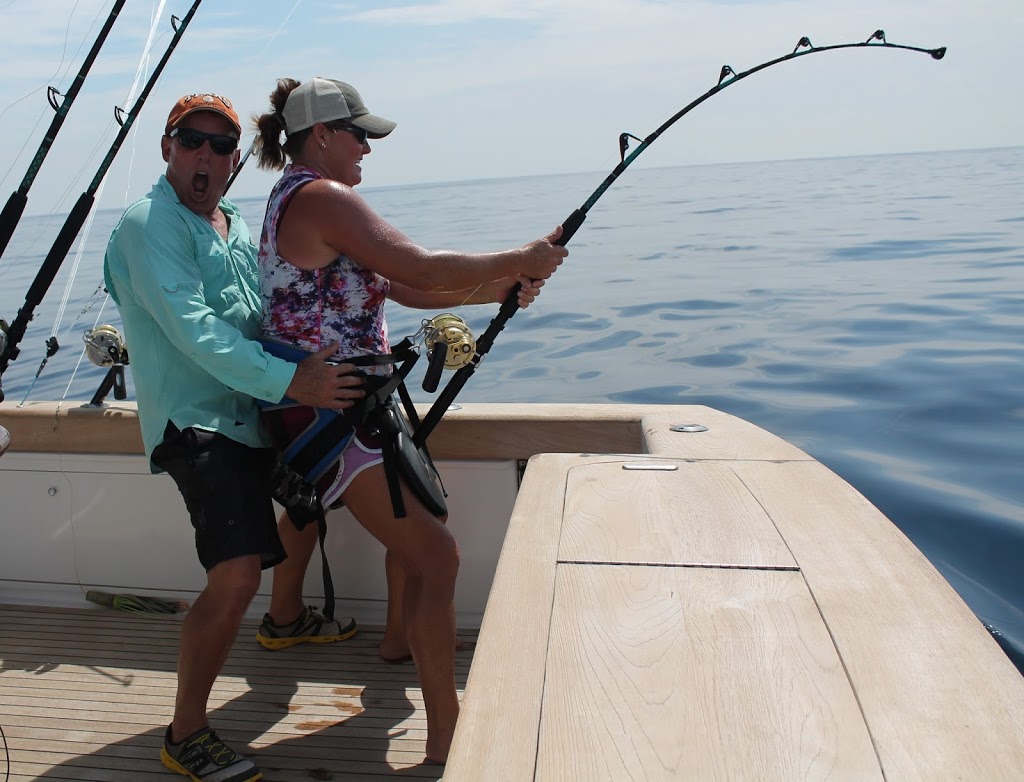 Mark giving his support to Diane…
After that initial run the fish stayed down and was tough, though after 45mins Diane got the fish up and boat side for the release. Great job on a tough fish Diane! We raised another blue around midday that teased in all the way though it did not switch to the mackerel. For the rest of the day we raised 13 sails and released 6 from 10 bites and boated a good sized mahi.
Kind of hard to leave an area like that, especially seeing it was all 10-12NM from the dock, so we were back the next day. There was a change in the weather with the start of a small tropical depression showing itself though it didn’t affect the fishing, first fish of the day a small blue marlin came greyhounding into the spread that did nothing, second fish of the day a blue of about 250lb came in hot on the long right teaser and Alan was hooked up to this one after a great switch and bite. 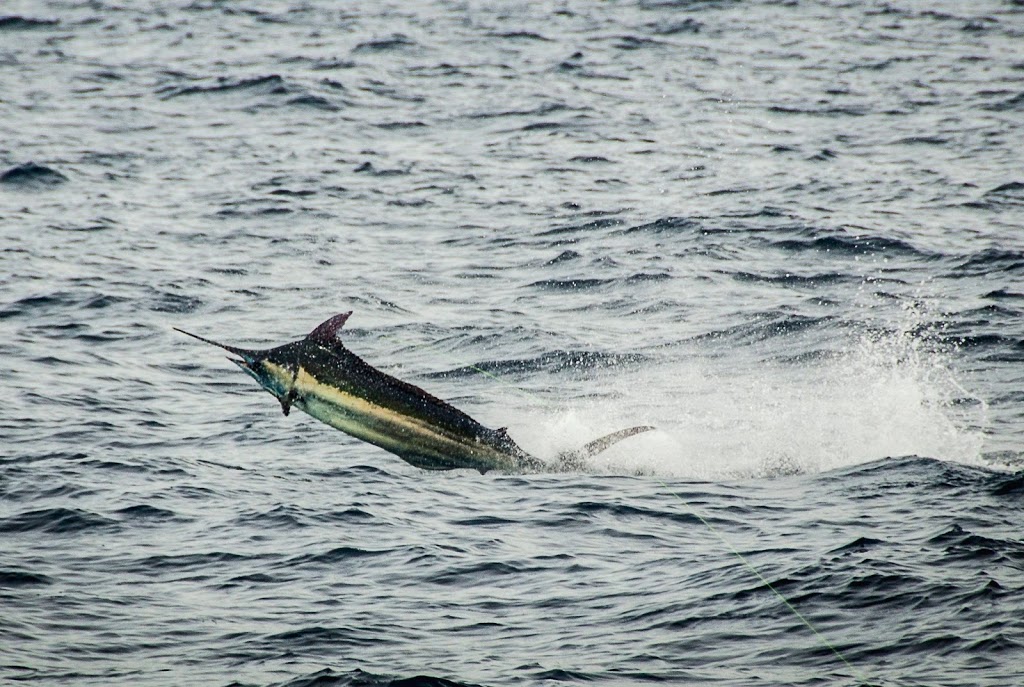 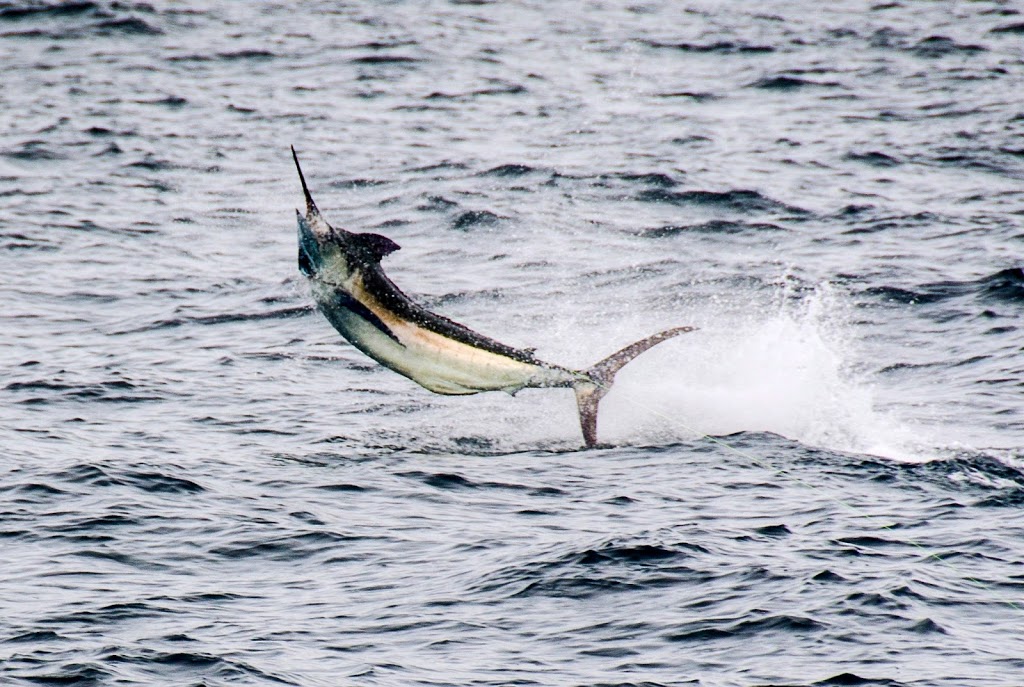 Alan’s blue tearing it up!
After a 30 minute fight we got the tag in and let it go. Back to fishing and we had our spread out for less than a couple of minutes before raising another blue that we got the bite from right behind the transom after coming up on the short teaser though missed it. Wow, 3 blues in the spread in the first hour of fishing. Awesome start to the day! The sailfish bite slowed down a little though we released a couple in the next hour… 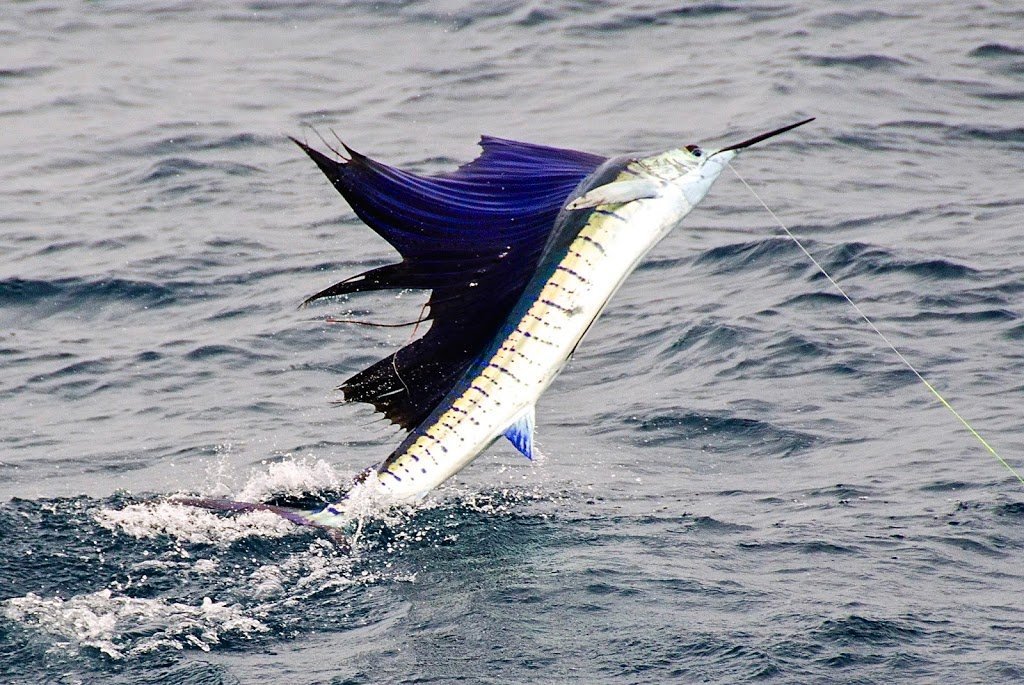 Beautiful colors on this one.
And Diane about to release another.
……Before another blue came up on the right long teaser, it disappeared and then came up on the long right rigger bait, we got the bite and now it was Mark up on a good sized blue for the lighter 30lb test of about 175lb. 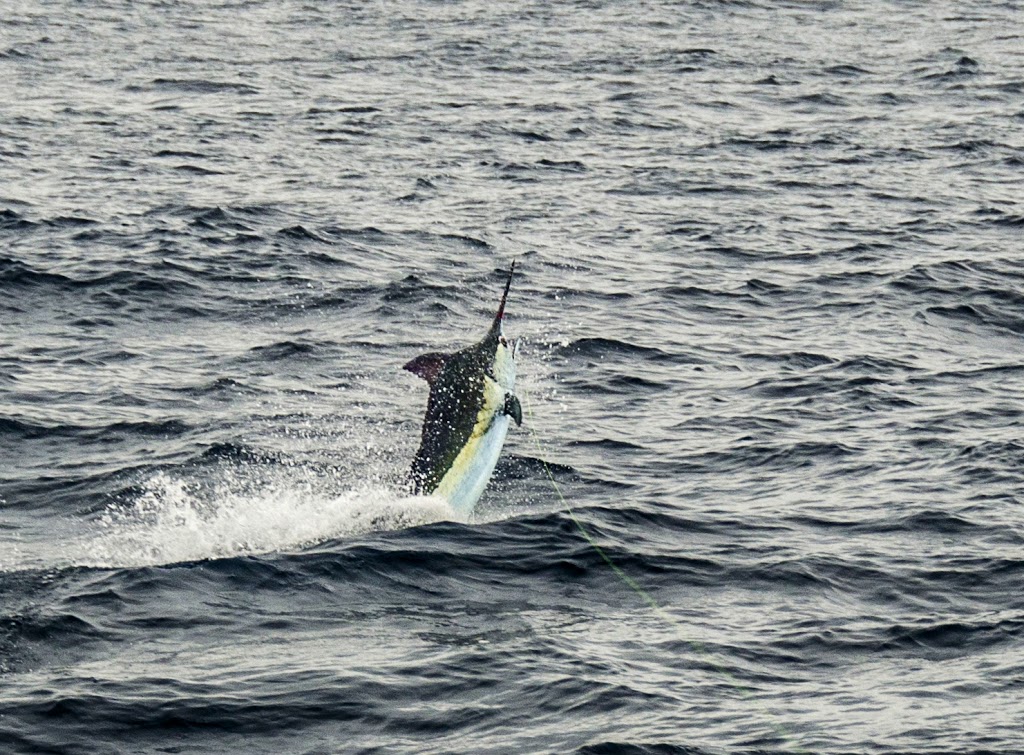 Chasing down Mark’s fish.
It was another tough one, though good rod work had the fish boat side in about 35mins and released in great condition. 20mins later we raised a nice one in the 300lb class on the short teaser, we got the bite on the mackerel though unfortunately missed this one as well. For the rest of the day we released another sail raising 7 sails and releasing 3 from 4 bites for the day as well as Alan boating this nice mahi. 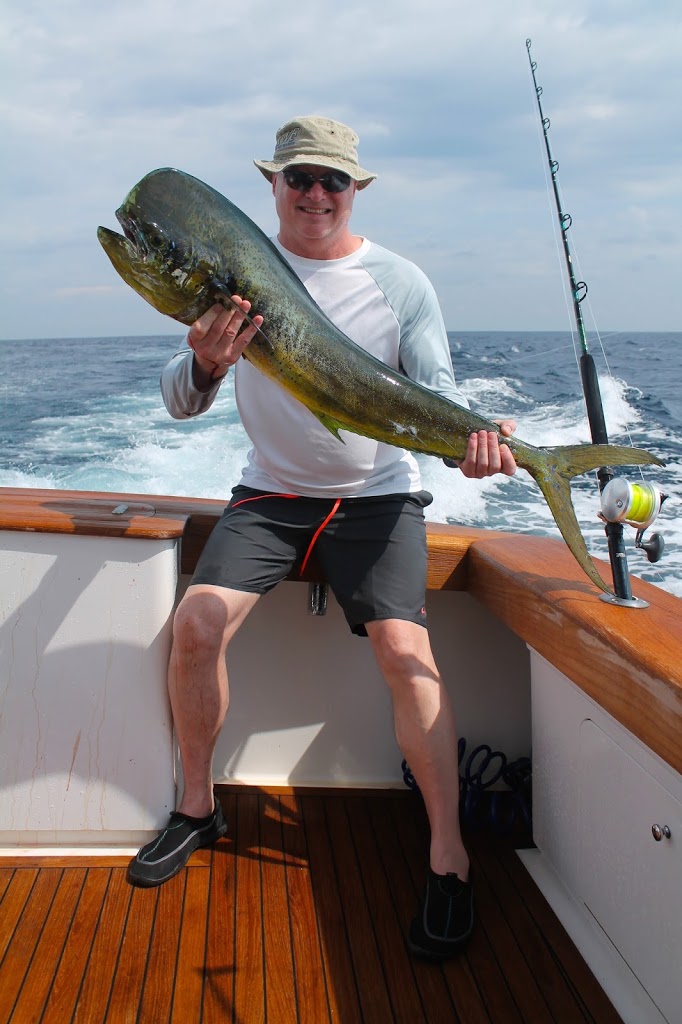 As we got into the afternoon conditions deteriorated some and they decided to call it quits and head in at about 1400 to spend the afternoon in the pool relaxing and reminiscing a great day on the water with 5 blue’s in the spread, 2 released from 4 bites, 3 from 4 bites on the sails and fresh mahi for dinner.
Capt Julio was at the helm for their last day out on the 17th and it seems conditions were worse out there, though in a short half day they raised 3 blues, missing one that did bite the trolled ballyhoo, Diane was on this one for about 5 mins before the hook pulled. They also released 3 sails and were back at the dock for midday. We had a great time with this group and are looking forward to hosting them again.
Here is an abridged comment from Mark and Diane McHugh taken off Trip Advisor:
We visited Sailfish Oasis Lodge Oct. 14-18 for one of the best trips ever! The lodge was very nice and super clean in a beautiful setting along a canal. We were met at the airport by our very competent driver, Eddie, who speaks great English and proved to be an awesome, dependable guide throughout our stay. Most of the lodge was open-air under some spectacular tiki structures, with comfy lounge area, satellite TV, bar and sweet swimming pool with a bench right at the bar. Service the entire trip was phenomenal and first class. Josie, Alex, and Freddie were super hosts, jumping immediately to fulfill our every request. Carina was the sweetest and most courteous server you can imagine. And Chef Carlos…WOWWWWWW! This guy is absolutely incredible, whipping up the most fantastic dishes from appetizers to unbelievable dinners of vegetables, fish and steaks. Words can’t do him justice.
The fishing? FANTASTIC aboard the 40′ Allure, an incredibly comfortable fishing boat. Captain Chris (aka Kiwi) is clearly a seasoned captain with great skills both with the boat as well as finding and catching fish. We landed three big blue marlins, with my wife’s at an estimated 400 lbs, a whole bunch of sailfish, and a couple of big mahi mahi for dinner. I’ve been on a lot of charter boats, but our deck hands, Julio and Enio were the best I’ve ever seen. Quick, efficient, and always ready for anything. I was very impressed, and again, they are absolutely THE BEST!
Chris and Liz, thank you for an unbelievable fishing and resort experience, you folks have done a great job. We will be back.
Mark and Diane 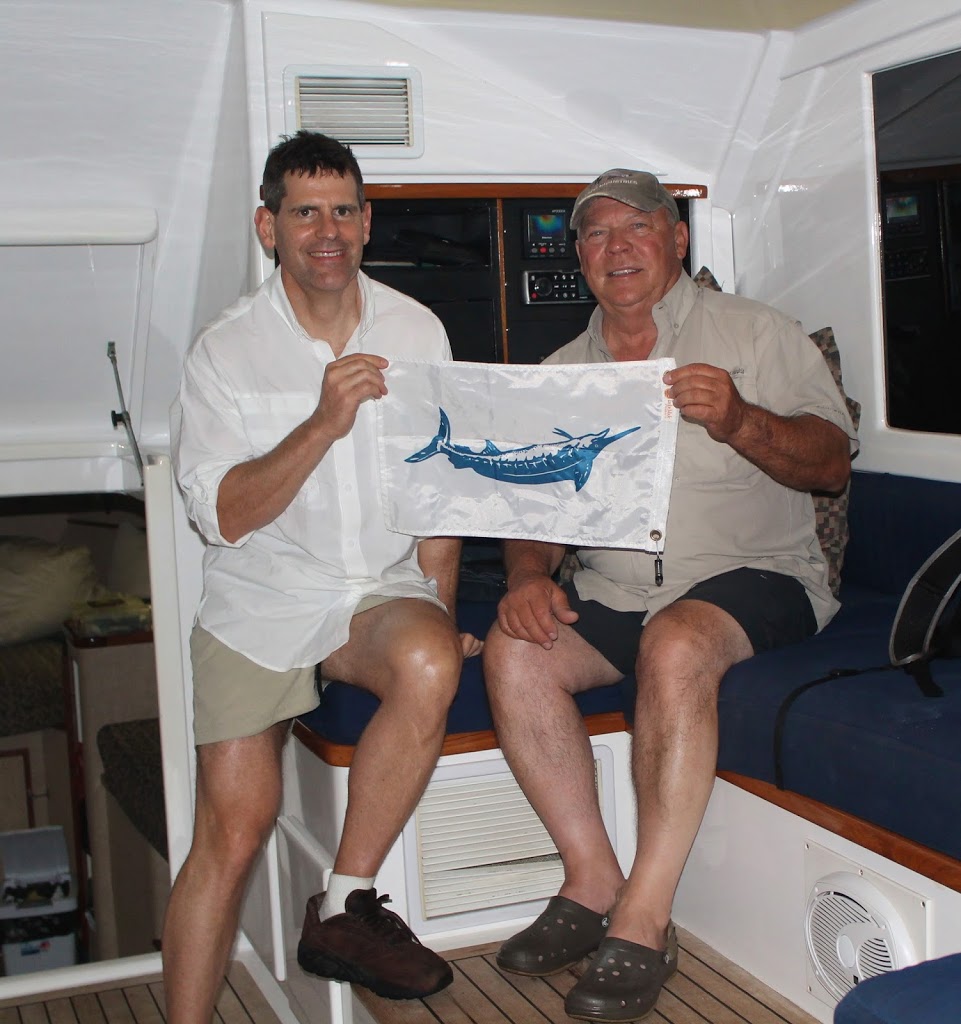 Brent and Larry.
October 20 and 21st we welcomed back Larry Fagg with his son-in-law Brent Breaux. Larry is a regular down here and this was Brent’s second trip. Both flying in from Texas we were just getting over the tropical depression intensifying though by the time they got in the weather had settled nicely. It was a late start due to flight complications and we left the dock at about 1015 our first morning and we were the only boat out there for the next 2 days. A short run and we were fishing by 1045 at the bottom east corner of the pocket, at 1055 we raised a double header of blue marlin with one pushing water and eating the long rigger bait, the other coming up on the left short teaser. We missed the one on the rigger though Brent came tight to a nice blue pushing 350lbs off the short teaser on the pitched mackerel. After 20mins Brent got the release on his first ever blue marlin. Congrats and nice going Brent! 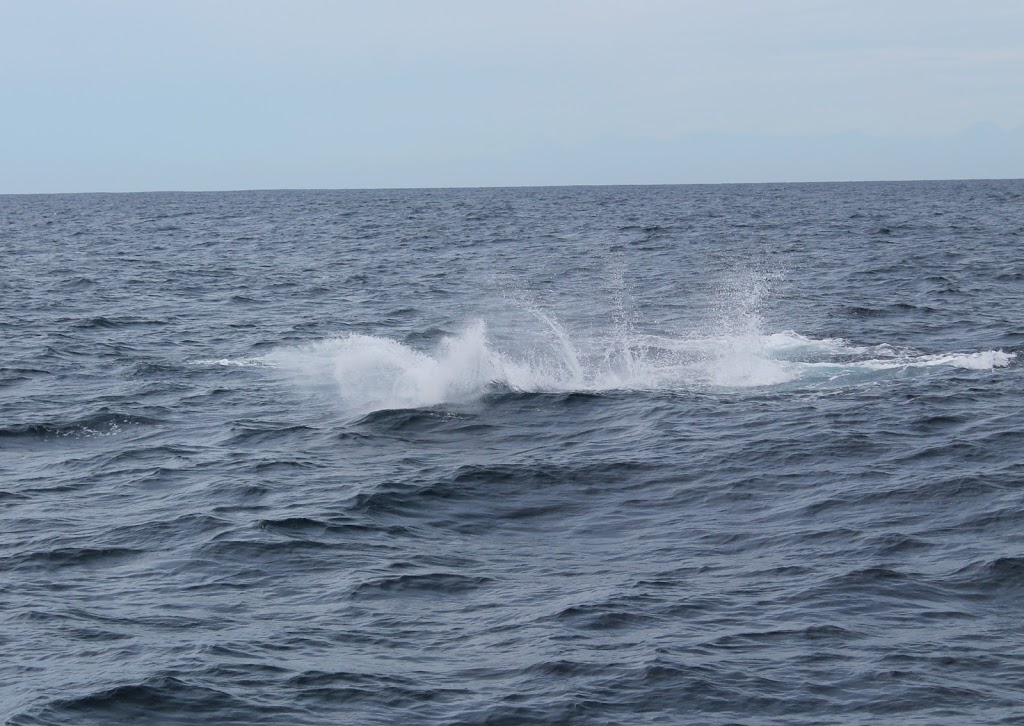 My camera jammed and I missed the shot….sorry Brent. Good splash though!
For the rest of the day we released 2 sailfish from 5 bites…. 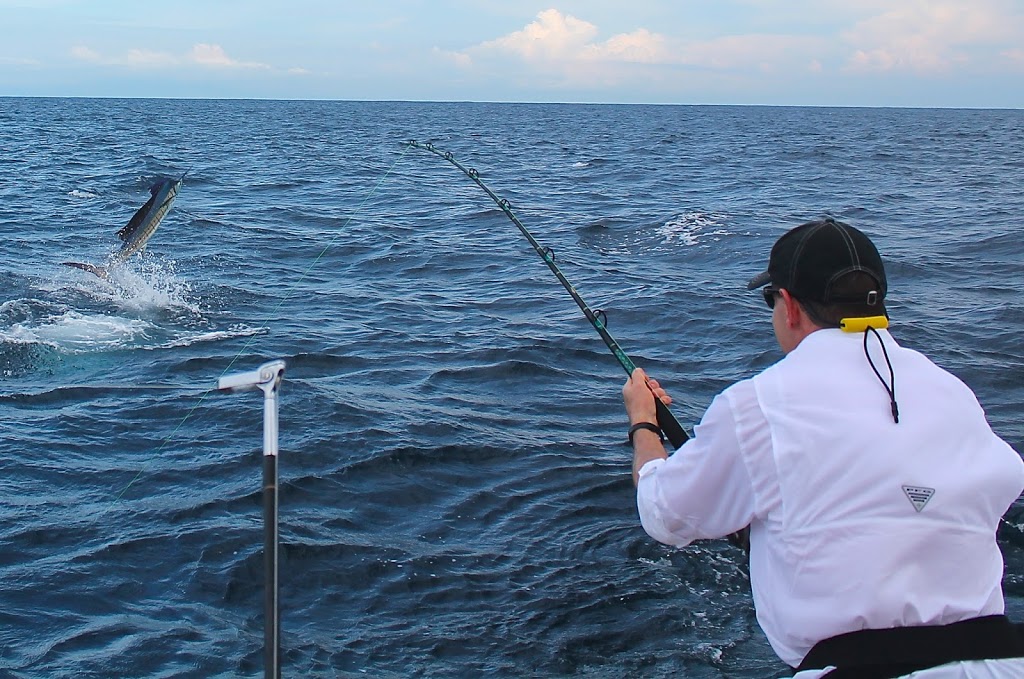 Brent on one of his sails.
The water quality had changed with a strong current pushing in some off-colored water from the east, we tried to find the good stuff covering a bunch of water the next day though it was kind of tough out there with 2 sailfish releases from 3 bites and a nice mahi for Larry.

High flying sail.
Always a good time fishing with Larry and Bent and over the last 7 days of fishing then we raised 15 blue marlin releasing 5 from 10 bites and with 54 sails in the spread we released 33 from 47 bites and several good size mahi’s boated.
Since then the weather improved and some nice blue water has since pushed in from the east. Boats have been reporting some excellent fishing the past couple of days with up to 30 raises and the odd marlin so it is all on. After that weather last week it looks like it is settling down and we are right on the cusp of the dry season. November and December are some of our favorite months to be on the water. We had a spectacular sailfish bite last November and the marlin bite in December was worth getting out alone for, though the amount of sails in the mix was consistently up there.
We have some great deals available for these 2 months so get in touch with us here to secure your dates, best fishing, best boat, best accommodations.
Contact:
liz@sailfishoasissportfishing.com