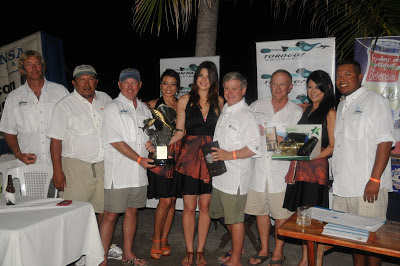 October 31st-November 3rd we had ALLURE co-owner Hill Dishman his brother Jamie and good friend Drew Donalson join us for the run to El Salvador for the XVIII Annual Bahi del Sol Billfish Tournament. Leaving out early on the 31st we ran about 80NM to an area outside of Bahia del Sol and trolled our way down the edge. Pretty slow pickings for us with greenish patchy water we raised a blue that made a half assed bite at the pitched mackerel and a sailfish that didn’t bite at all we only caught a few mahi’s to about 30lb’s
First day of the tourny we ran east, and got into some fish though fairly slow, luckily the guys made the most of their chances going 3 from 5 bites from the 6 sailfish raised and 7 mahi’s boated. Better action offshore for the the rest of the fleet so we ran out wide the following day. The bite had slowed some though once again great fishing from Hill, Jamie and Drew making the most of the few opportunities, we raised 10 sails, 8 of them bit and released 7, the one we missed ‘chewed’ through the leader after 5 mins hooked up and staying down and dirty on us. End of the second day saw us 4 fish behind the leading boat though sitting in 3rd place overall and in striking distance.
After checking out the satellite imagery we decided to run out to the east to a good body of water coming in from out that way. 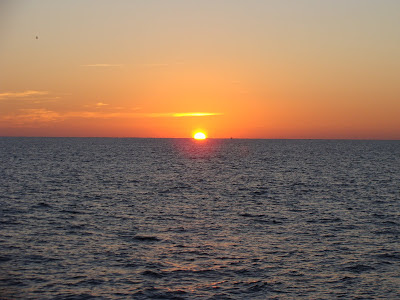 Watching the sunrise on the run out east last day
It proved to be a good call and we were into some fish right off the bat, it slowed some mid morning and after trolling another 6NM into 500ft of water we came across whales, spinner dolphin, spotted dolphin, birds working and bait galore. No tunas though we got covered up by big mahi’s so much so we had to get the baits out of the water and just pull teasers. We boated about 12 mahi’s all in the 20lb-30lb range and cut off a bunch more than that! The sailfish bite was pretty good too with 20 raised for the day and 13 releases from 16 bites and raised a nice blue that unfortunately didn’t eat. Another great day for our team angling wise and they did enough to take it out winning by a 2 fish margin with 23 releases overall from 26 bites (we had to DQ one fish on the last day due to a minor technicality so 22 ‘official’ releases for the tourny). Good job and congratulations to ’em! 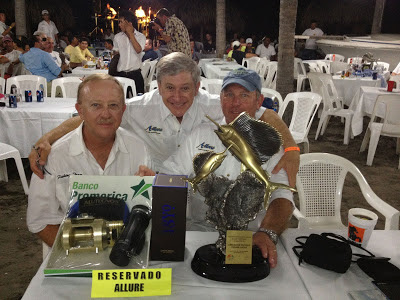 Jamie, Hill and Drew enjoying a few well deserved cocktails after the prizgiving.

October 26th and 27th we welcomed back Jack Pitts and Joe Segulja with clients Joe Cantu from ZAZA Energy, Don Pierce from Cornerstone Engineering and Kenneth Braden from CH4.With patchy water at best we concentrated in the cleanest we could find and had a good trip raising 14 sails and releasing 9 from 12 bites and boating several nice mahi’s. Definitely a good early season trip for the guys which included a lunch and coffee farm tour in Antigua. 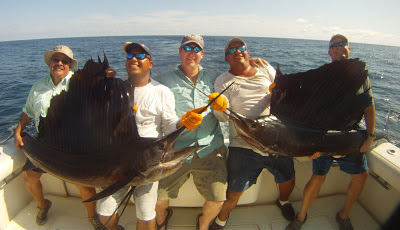 We have the Presidential Challenge series coming into town this week so it’ll be the first time this season with more than a couple of boats on the water, the fishing should be good! Still a few openings in December and the one set of dates in January 21-24 open so get in touch to secure a great fishing adventure in Guatemala……