Happy New Year to everyone, we had a blast down here at the OASIS once again with an excellent live performance by the Blue Dawgs, an incredible fireworks display and a full house. A great time was had by all and if you’re thinking of ways to spend you next New Year, try it here with us, it’s always a good time, guaranteed!! 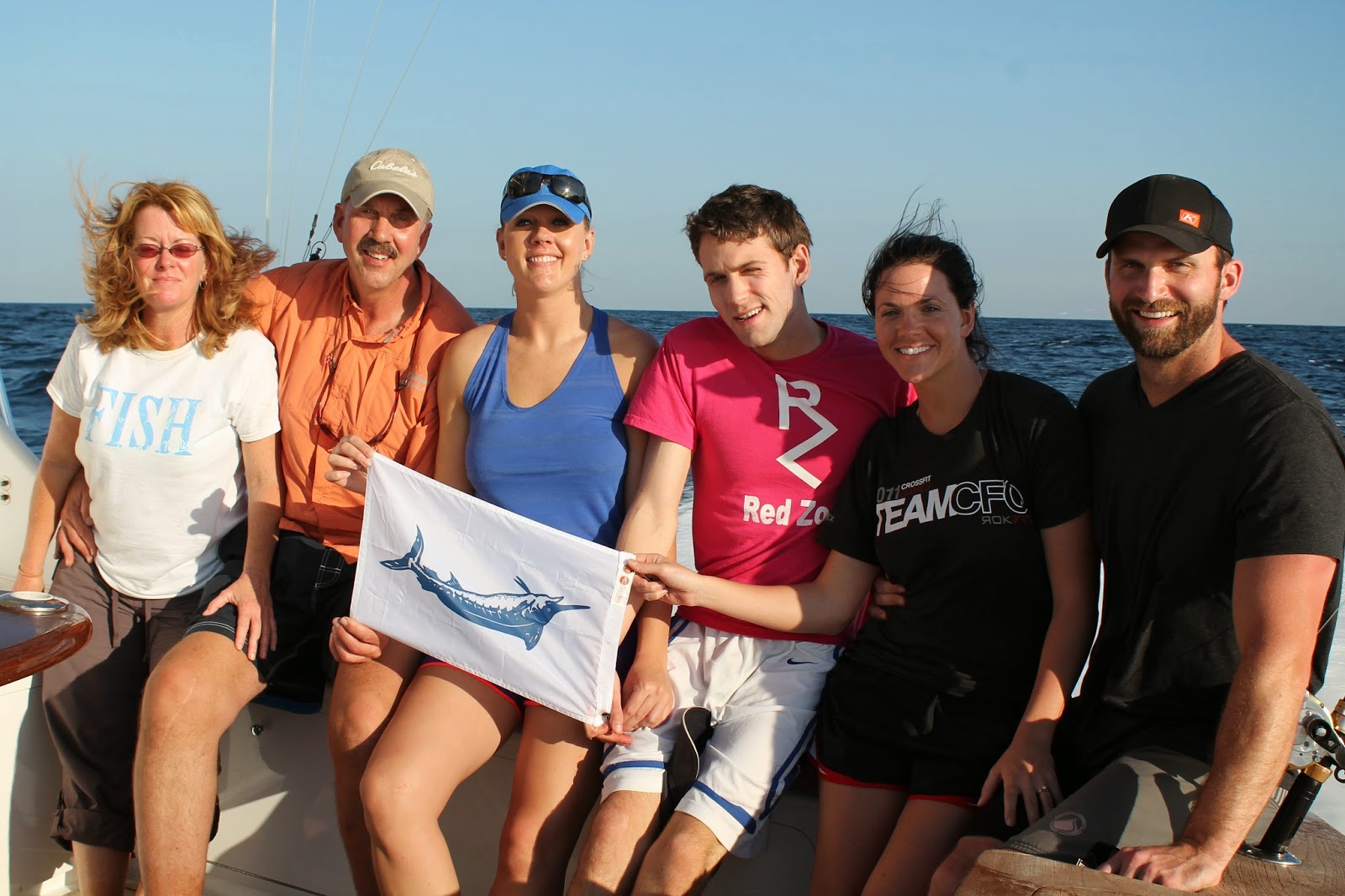 Laura, Doug Zingula, Tanna, Bret, Jillian and Chad Horkan
To the fishing…..on the 26th we welcomed the Zingula family to the Lodge fishing 27th through to the 29th. Doug is a regular to Guatemala and brought the family down for Christmas in the tropics from Nebraska and Colorado respectively. Fishing was a little tough though we still got everyone into billfish and some big mahi’s as well. On the first day Tanna was up on the rod when a nice fat blue came up on the short teaser. The big blue took some enticing with a re-tease though we got the bite on the pitched mackerel and Tanna worked hard getting the quick release on the fish after we ran it down before the fish knew she was hooked, Tanna’s second blue marlin in as many trips to Guatemala! She then passed the rod over to sister Jillian and that’s when the fish started, long runs, grey hounding jumps and down and dirty fighting. Some different angles, excellent angling and 40 mins later both the fish and Jillian were pretty worn out. We got the fish boatside for a healthy release, that 11/0, 2004EL circle hook by Eagle Claw right in the corner of the jaw…. 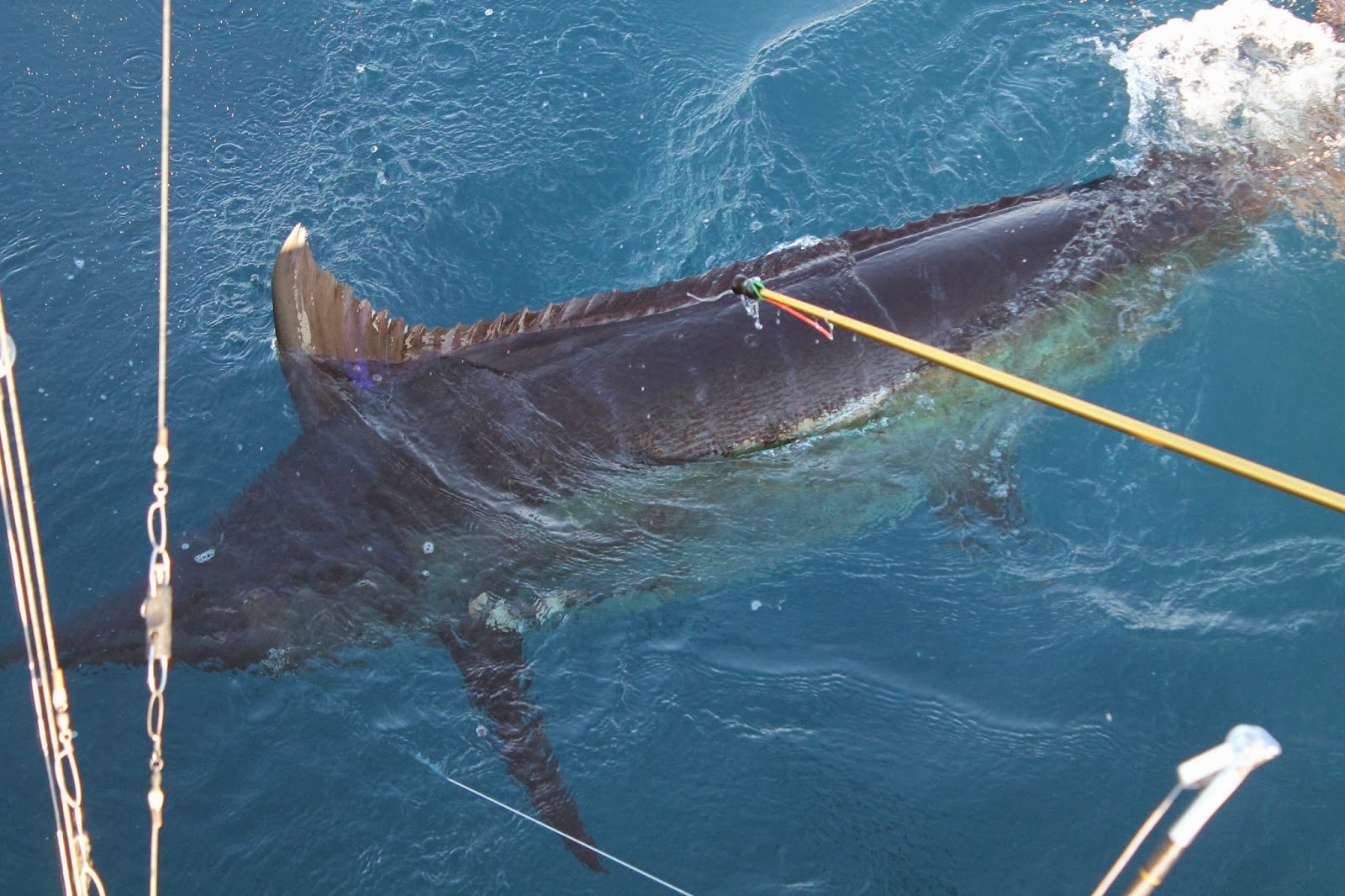 Nice fat blue of 350lb + for Tanna and Jillian Zingula
For the rest of the trip the group released 12 sailfish from 19 bites, some nice big mahi’s and a great time both on the ALLURE II and down at the Lodge with Nick and the staff. Laura, a big game biologist got into the action as well tagging a couple of sailfish as well as this BIG sail for her… 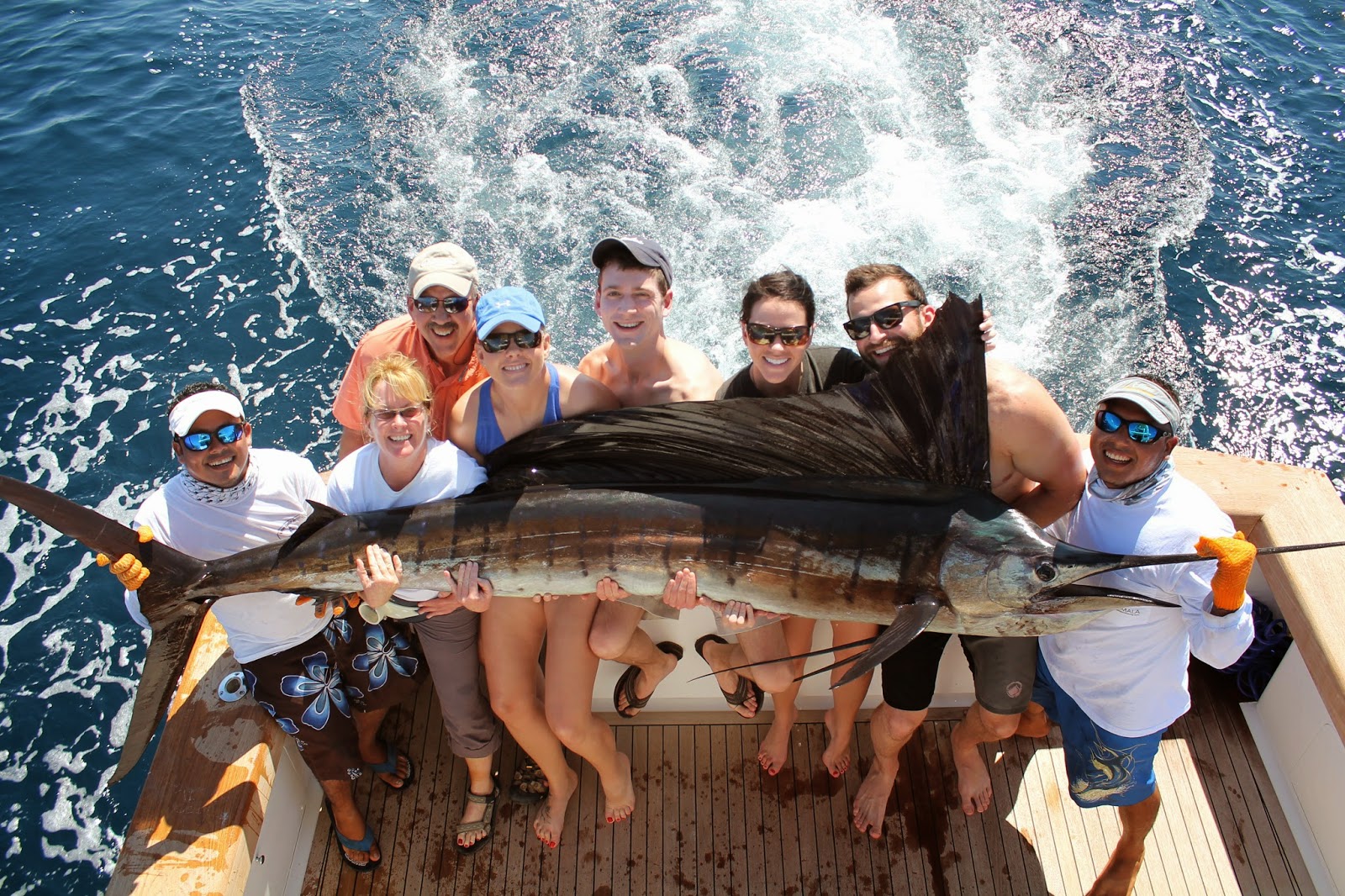 BIG sail to top off a great trip with some BIG billfish and mahi’s.
On the 27th we had Hoech group came into Guatemala to fish the 28th and 29th. Steve and Carla Hoech were joined by son Chase with his beautiful wife Kristen. Fishing on ALLURE for 2 days with Capt Julio and crew the team got into some good fishing with 19 releases from 23 bites as well as a few big mahi’s. Good times and they fished well!! From the Oasis they left and finished off their trip in Colonial Antigua staying at the wonderful Casa Santa Domingo for two nights including New Years celebrations…. 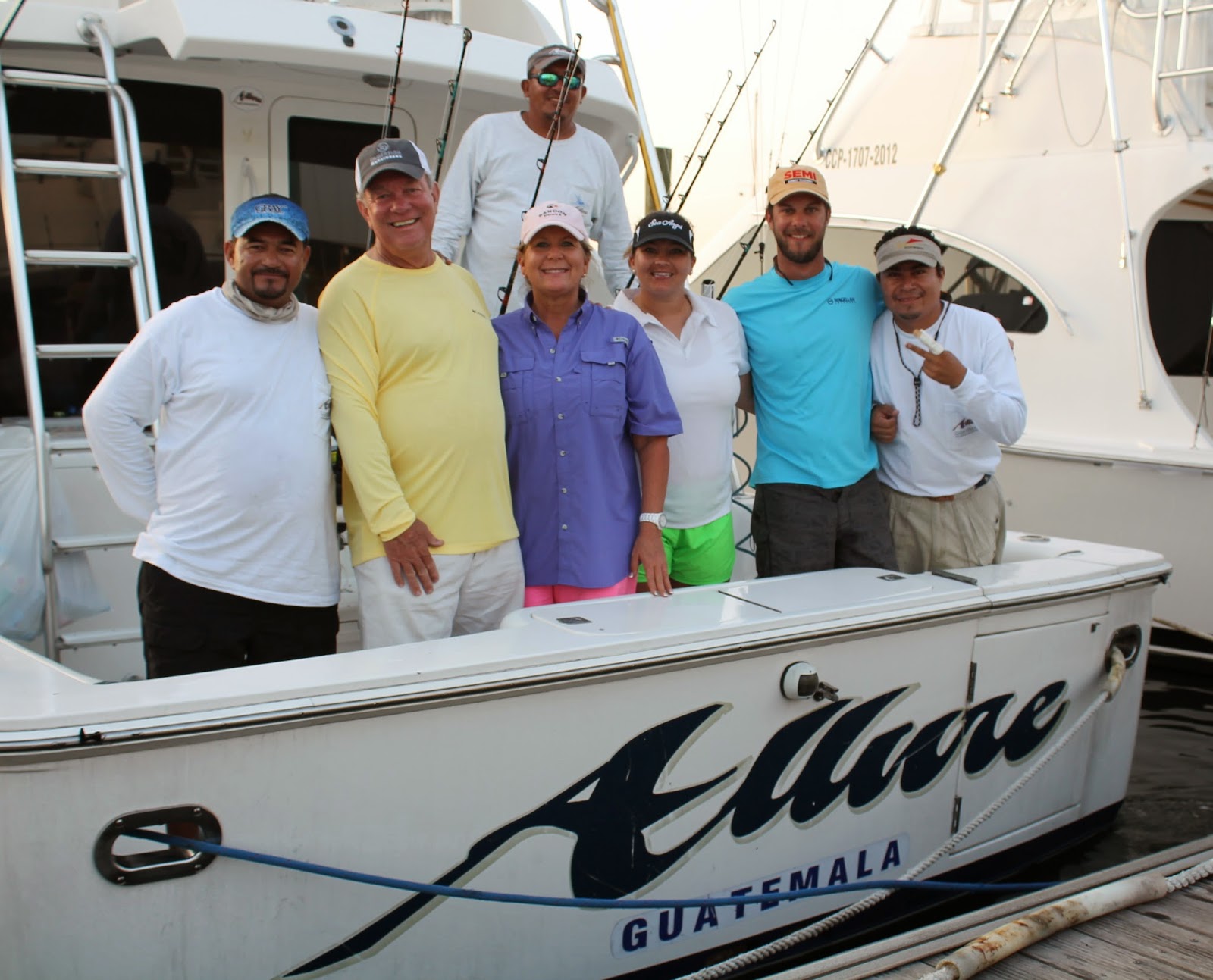 Steve and Carla with Kristen and Chase Hoech after a couple of great days on the water.
On the 28th we had the O’Dell crew turn up at the lodge. 4 couples from Savannah, Georgia, mixing it up between personalized spa treatments for the ladies, surfing and fishing from the 29th through the 31st on the CAPTAIN HOOK. This crew had an awesome time out there as well, the highlight being Mandy O’Dell’s BIG 120lb+ sailfish on 16lb tackle. Awesome catch Mandy!! They enjoyed their time down at the Lodge, including the New Years bash, a fun group. They also finished off their trip in Antigua for the last 2 nights on the 1st and 2nd, enjoying everything that Antigua has to offer…..with their last night a late session sampling the famous Illegal Mezcal, down at Café No Se…… 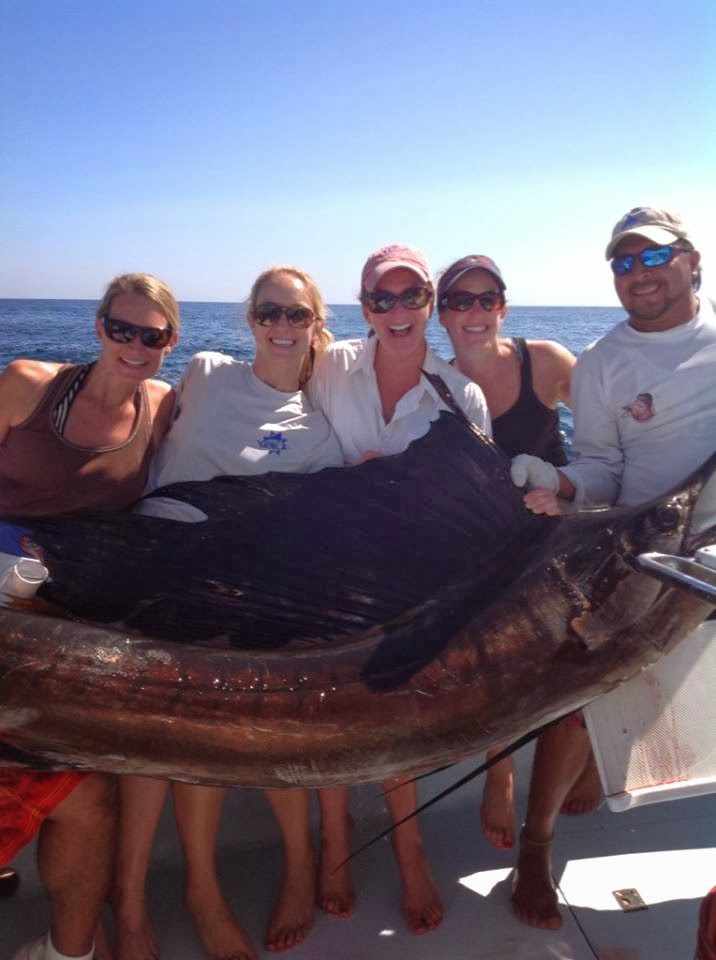 Some happy girls and another very large sailfish, nice one on the 16lb!!

Hill and Donelle Dishman came in to the lodge on the 30th with Donelle’s sister Julie Turner for the New Years bash a few days of off-shore fishing. Bryan O’Dell joined us for their first day on the water, the last day of 2013. On ALLURE II we had a bit of a tradition to keep up with…..The past 2 New Year’s we had released the last marlin in Guatemala for the year and, trying to keep up with the same, ran out wide off the edge looking for one despite there being a reasonable sailfish bite back inshore. Just off the drop off in the deep water we saw a tailing stripey, made the pass and it came in hot on the teasers. Bryan pitched the ballyhoo, got the bite and passed the rod off to Julie, her first billfish. A tough one on the light stuff it gave her a workout before we got the release… 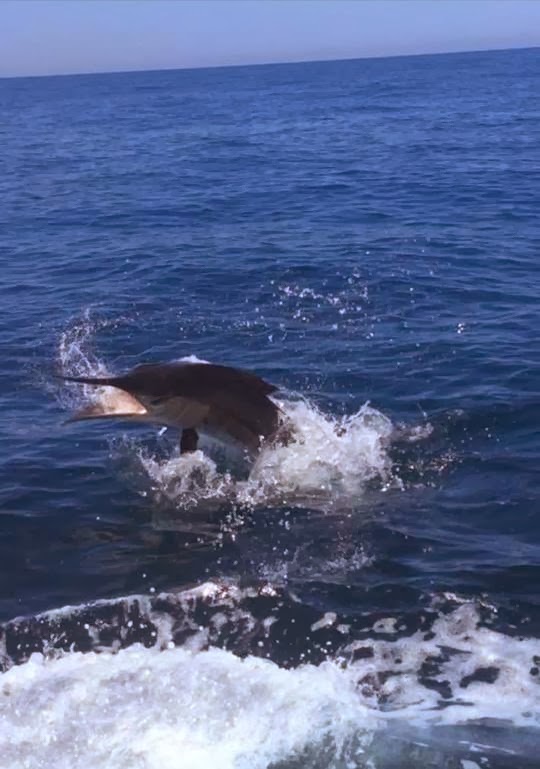 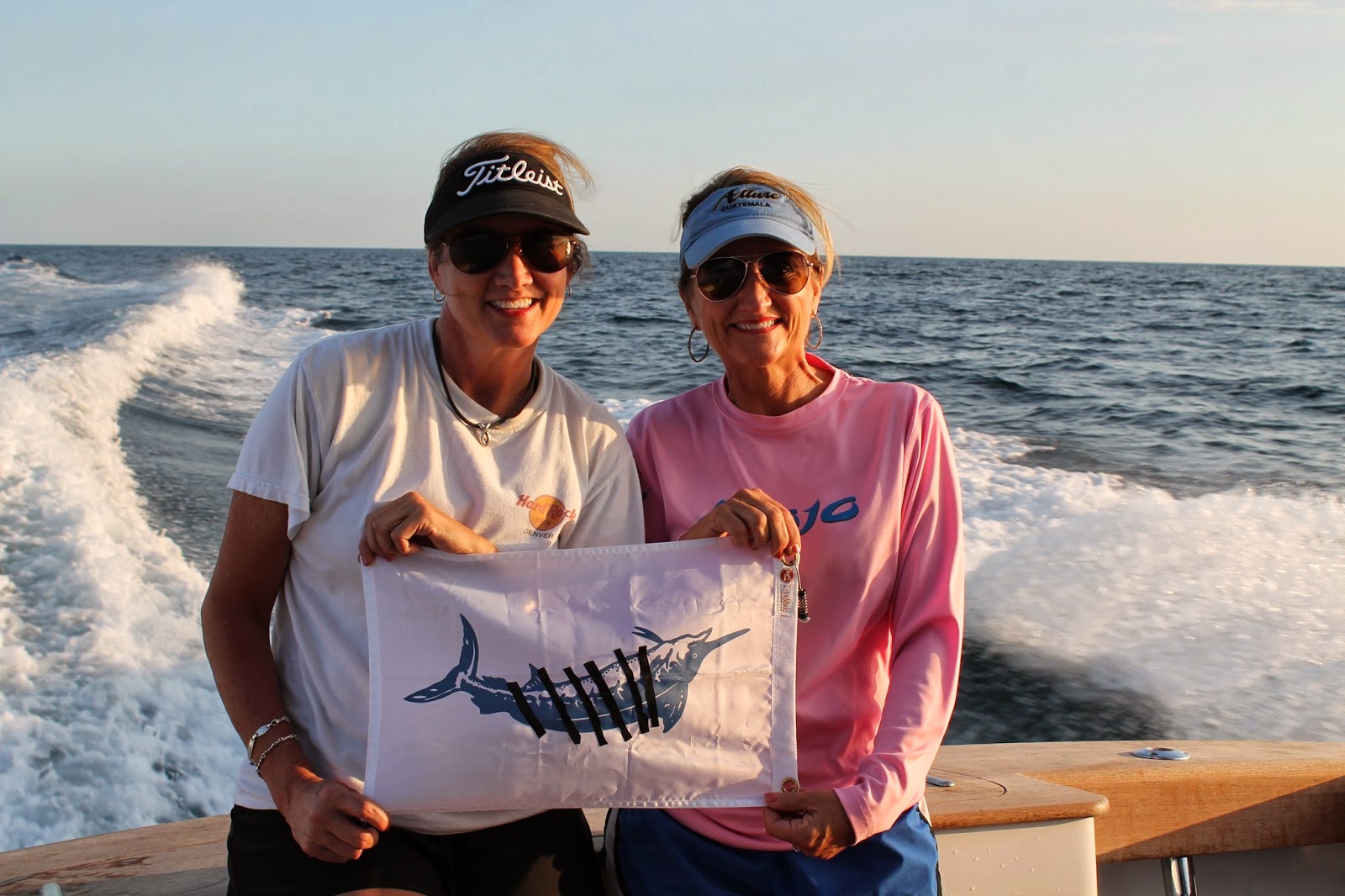 Sister’s Julie and Donelle with our makeshift flag…..
So, we managed it for another year, a nice stripey of around 140lb’s, add 2 from 4 sailfish bites some YF tunas and mahi’s and it was a great last day to the year on the water….
That night the Blue Dawgs put on some great live entertainment, another great NY party with some big hangovers to deal with the next day!! 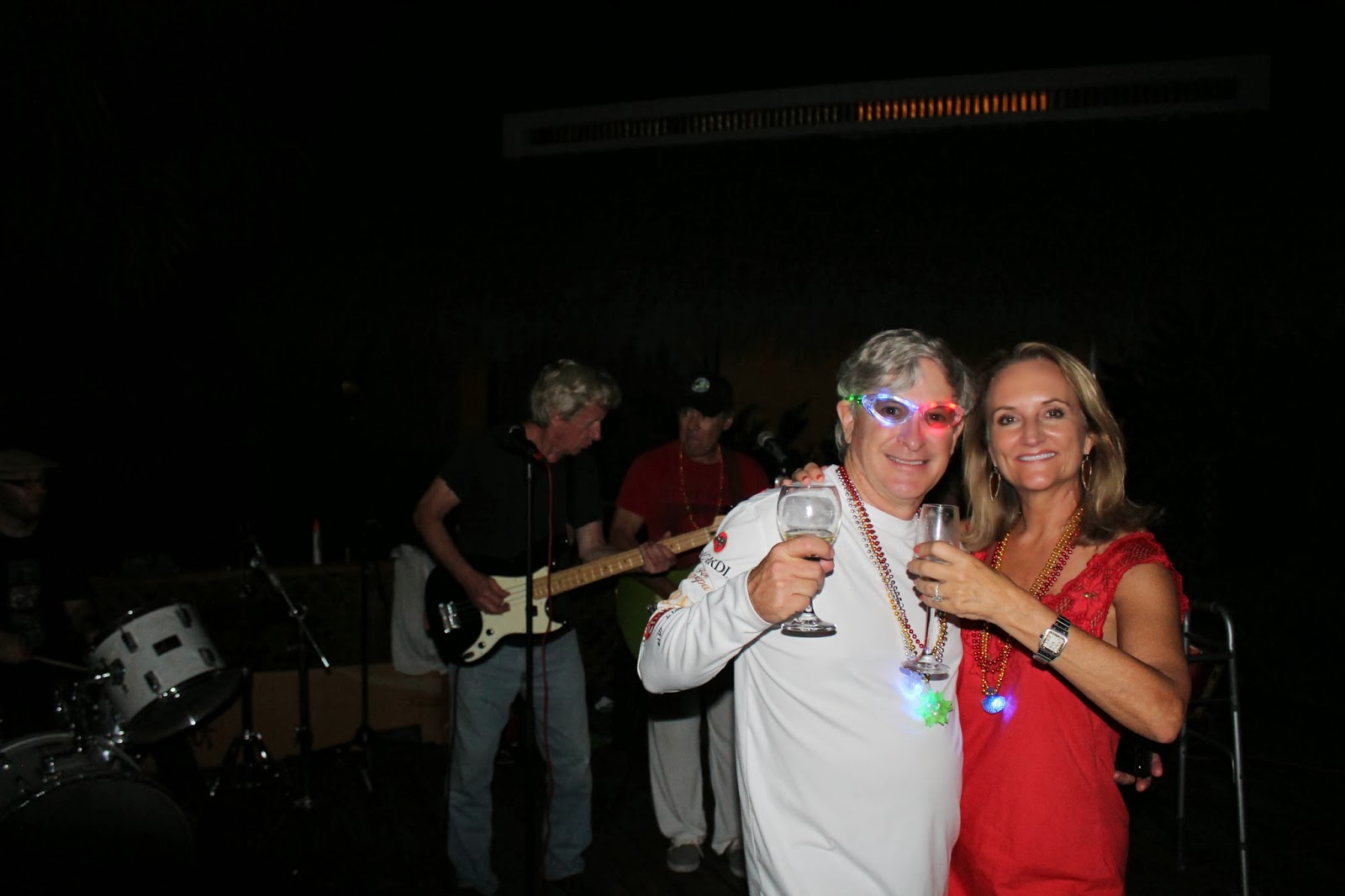 Cheers to 2014!!
We left late the next day at around 10.00 and in a state of hungover confusion decided it was a good idea to run to the east…..’looking for a new bite’…..we didn’t find it, though boated plenty of big mahi’s in a short day.
Hill was out the following day as our solo angler, and with clear heads, we went back to where the fish were and made up for the previous days’ fishing. On the fly all day Hill did the job releasing 7 sails from 9 bites, we teased in 14 sailfish, a great day… 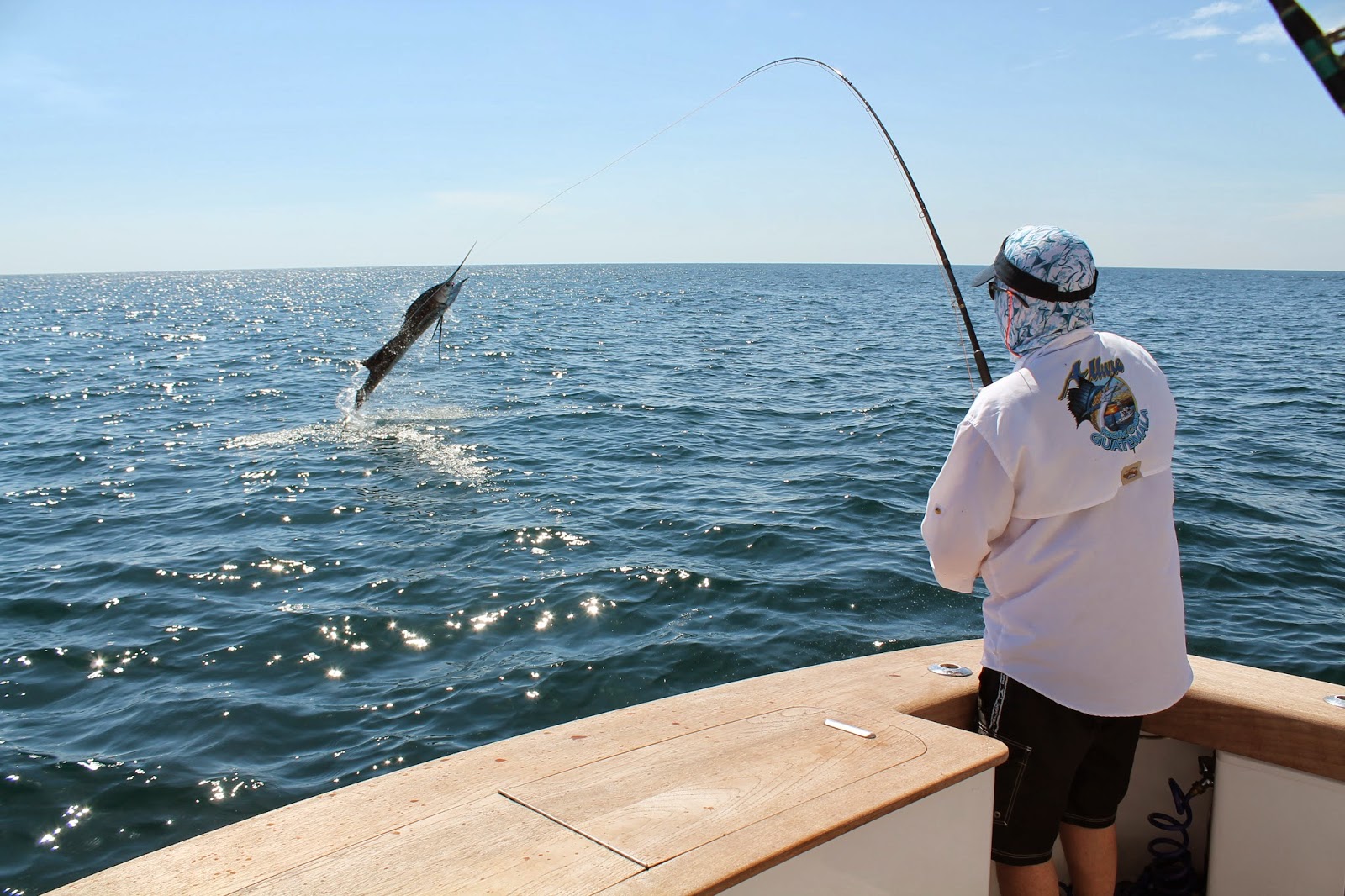 Beautiful day and great fishing…..
The next day we were joined by Ben Paschal from Laguna Madre Outfitters for 3 days of flyfishing with Hill. The fishing was tough on the fly with the sails doing a disappearing act on us. We ran wide and looked, and then pounded it out in-shore. Over the 3 days we released 3 big mahi’s on the fly including a hot double header which was a lot of fun. We raised a blue marlin of around 250lbs on the short teaser, switched it off and Hill cast the fly, the fish sat under the fly, not interested. We teased it in again, and again, this time with the mackerel, the fish came in a little hotter though was never really aggressive, we cast again for the same results. Each time the boat was knocked out of gear the fly just wasn’t good looking enough for it. The next time we got the boat back in gear the fish came up on the long teaser and this time we decided to pitch the mackerel, we got a very lazy bite, though it did eat and Hill came tight. The fish came to life and went ballistic putting on a show, we got the tag into that blue marlin after about a 20 min fight and released it in good condition…. 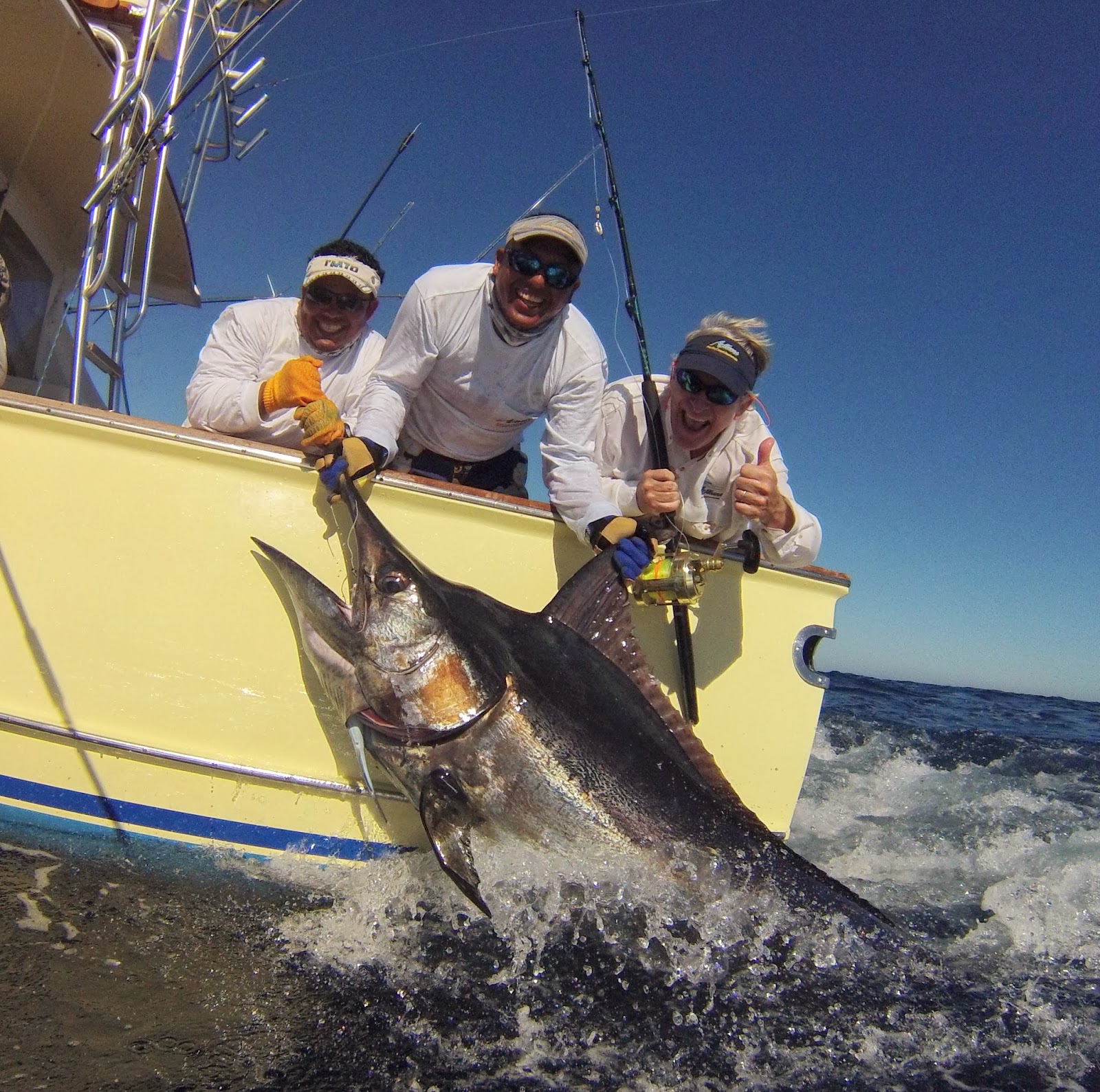 Beautiful jump shot, and the results……

And we raised 8 sailfish releasing 5 from 5 bites, you can’t do any better from your opportunities than that! Ben did a great job with his 12wt fly rod releasing 2 from 2, including a nice big girl.
Ben is a fly guide out of South Padre Island and a great photographer, we look forward to working with him in the future guiding some trips down here to Guatemala… 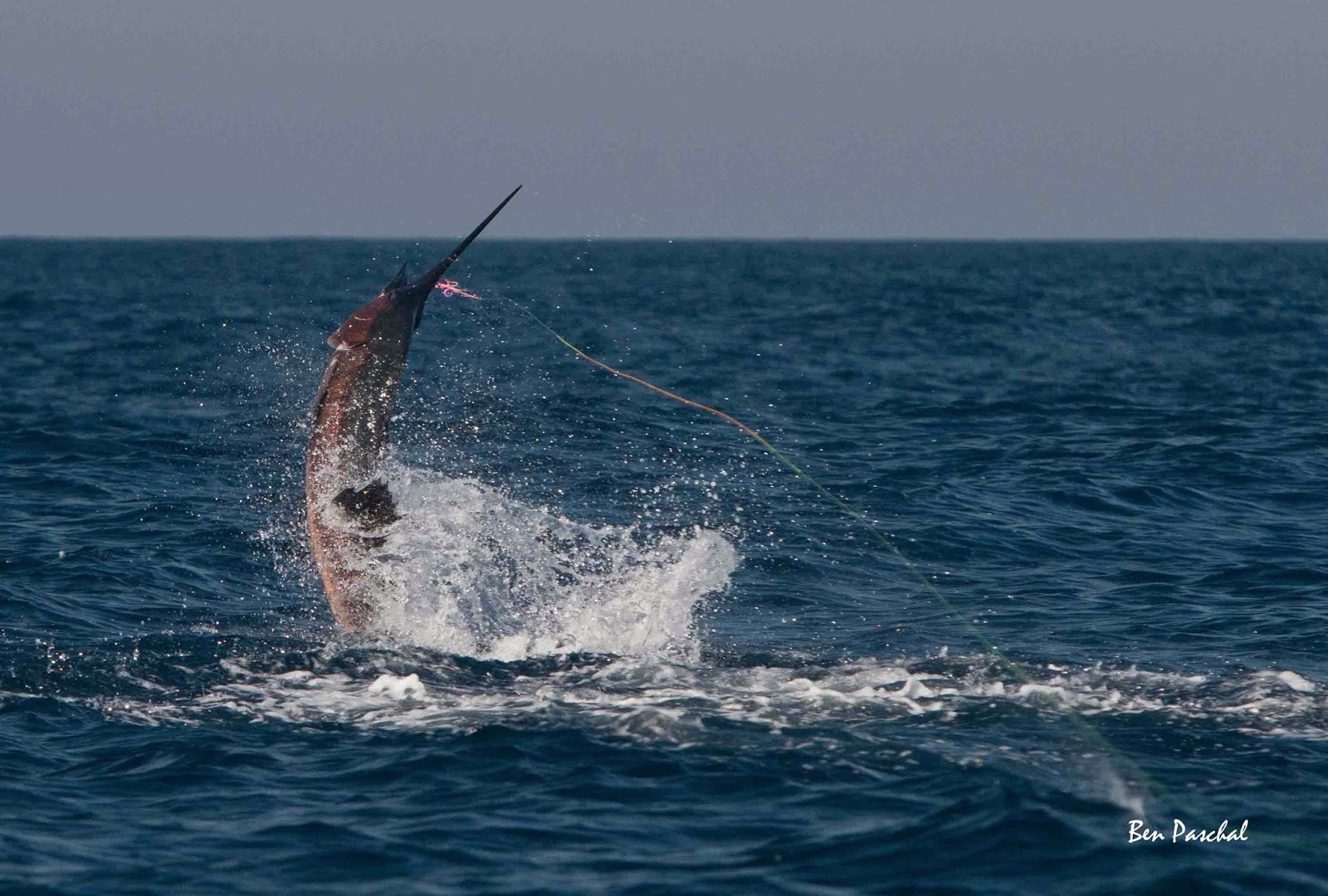 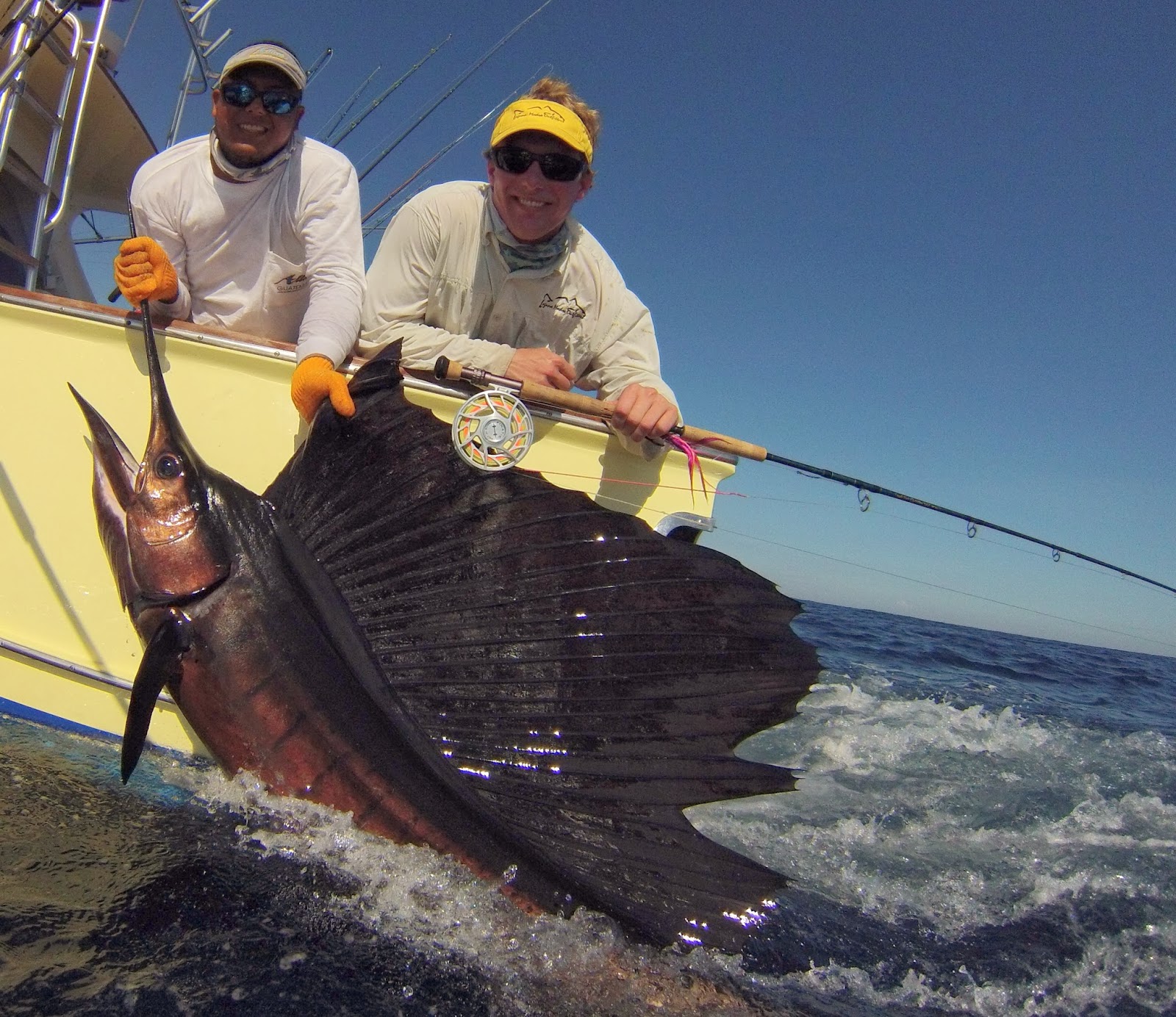 Ben with the smaller of the two he released.
The Ford group was also down from Texas for 2 days of fishing on ALLURE for the 3rd and the 4th, a little tough out there though they released 3 from 4 bites, landed plenty of big mahi’s and had a blast down here. They left raving about the boats, accommodations, food and of course the ‘campechanas’!!
If you want to know what that is you’ll need to be here at the bar, it does include some of the finest rum around and it is a favourite on the boat after a day on the water as well….. 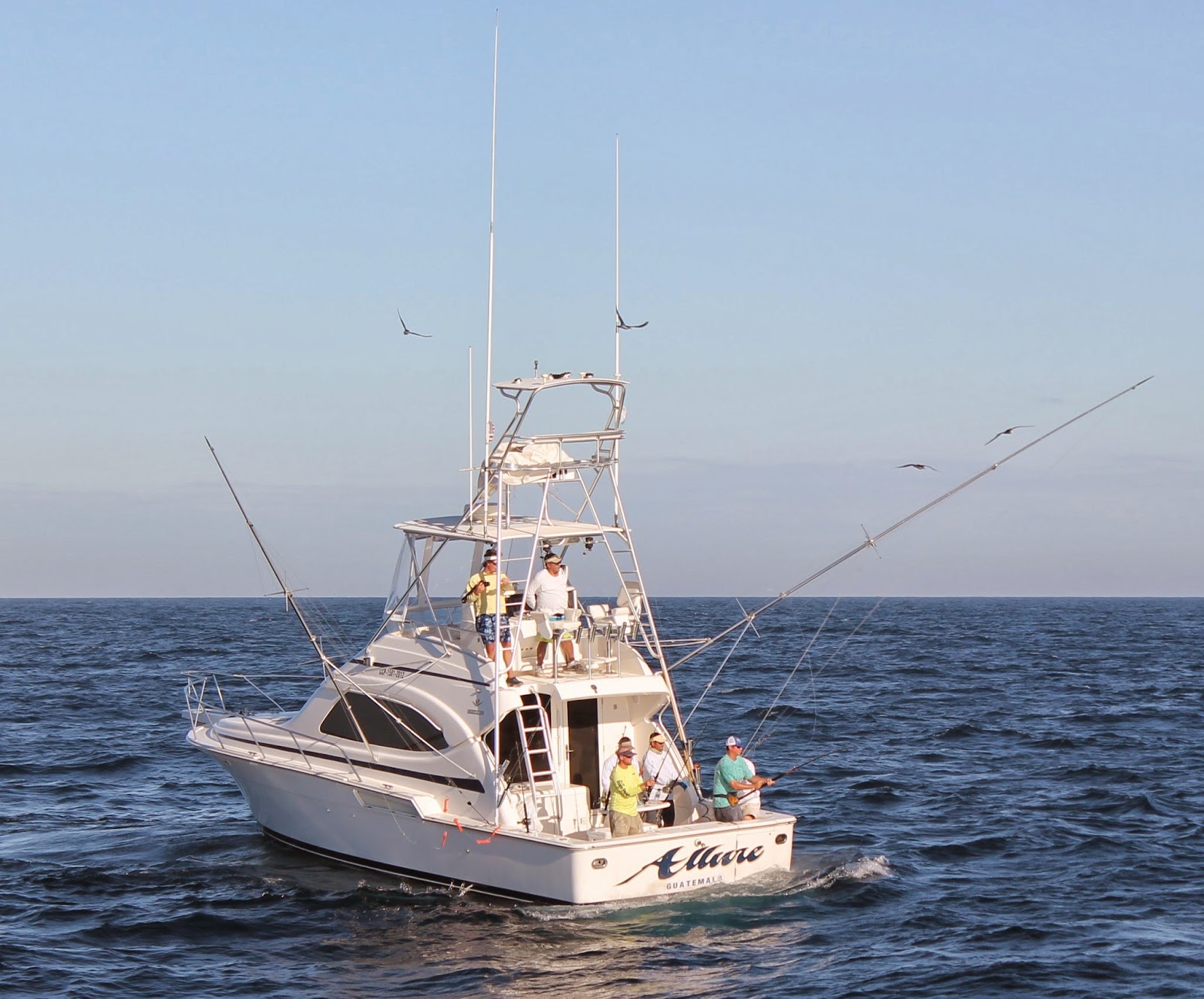 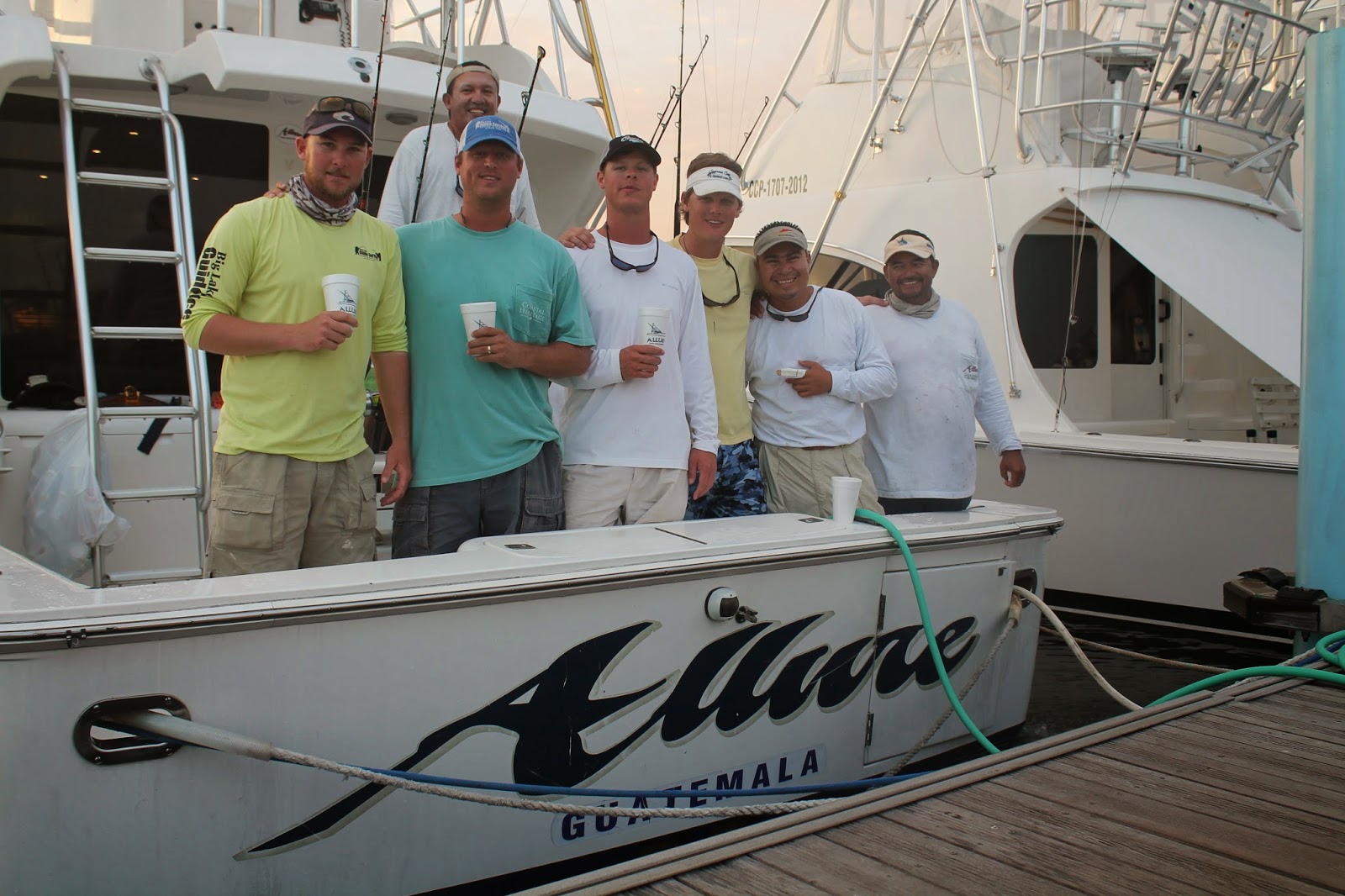 Hooked up and back at the dock campechanas in hand….
A little bit slow on the fishing front when talking Guatemalan standards though still some excellent fishing by most other standards! It will get better out there, we have had a lot of off-colored, cooler than normal water to deal with, though the current is pushing in hard from the SE and is looking to get back to normal. The bite will too. Contact us to get in on it, good times guaranteed!!
When conventional fishing we are only using the Eagle Claw 2004EL series, the same circle hooks we have been using for the past 10 years down here, the best for hook up ratio and healthy releases.