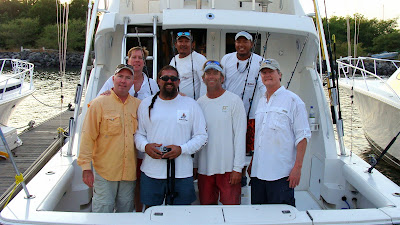 Chris Bean (back left), Brad Lynch, ‘ROD’ and Frank Oberle (far right) with crew of ALLURE
Chris Bean, aka Snr Frijole usually times his trips well with exceptional bites experienced in the past few years, this year the sailfish bite was a little slower though with 4 blue marlin in the spread and 21 sails over 2 days of fishing he still timed his trip well and brought the luck. We fished him and his group of Rod, and Frank Oberle who have both been down previously and Guatemalan first timer Brad Lynch 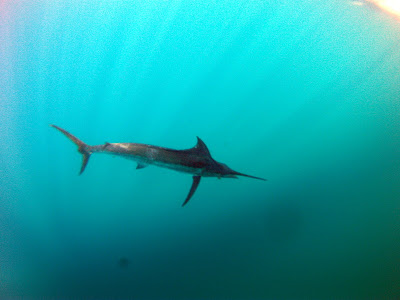 Rods, blue marlin from Sunday 11th.
Saturday 10th we fished the east side of the pocket and the first fish of the day in the spread was a blue that crashed the right short teaser, Chris pitched the mackerel on the 50lb stand-up gear and got a great bite resulting in a solid hook-up. The blue put on a show from there on, a feisty fish of about 180lb’s with the attitude of a fish twice it’s size it tore up the ocean and took Chris a while to get it boat-side for the release. 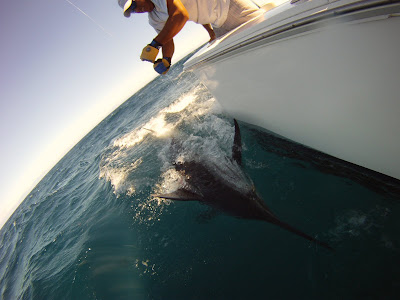 Mate Enio about to release Chris’s blue
There were a few blues in the area 9 released among the fleet for the day though with few sails we pushed out along the edge and got into some sailfish action with Rod and Brad getting into it some bites later in the day releasing 3 from 6 bites. 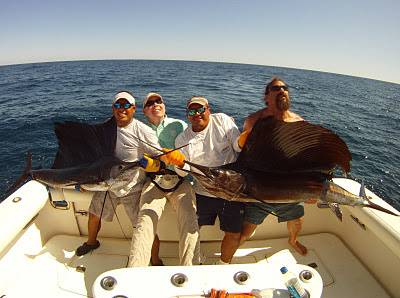 Brad and Rod with a double header
The following day Frank joined the crew and the guys were keen on getting the bites and hooking ’em. With the current coming in from the east we fished the west side of the pocket and got into some fish mid morning, a few sails missed from a little too much pressure on the drop back though at least we were getting the bites and into some fish. Later in the morning we had a small blue of about 125lb’s come in hot on the long teaser, Rod pitched the 30lb gear and got a great bite and did a good job dropping back smoothly and coming tight. Another tough fish and great sport on the 30lb gear. Soon after the release we raised another bigger blue on the left short, the fish stayed deep and got the mackerel out, the fish appeared briefly behind the long rigger bait before peeling off. A couple more sailfish bites and a couple more sancochos and then another blue of about 350lbs crashed the right short, it came back up on the flat and we got the bite though unfortunately missed it. We ended the day improving our averages and getting the technique down releasing 5 from 13 bites on the sails and getting a few big dorado bites as well. A great trip with 21 sails raised and 19 bites, 4 blue marlin raised resulting in 3 bites in the 2 days of fishing. 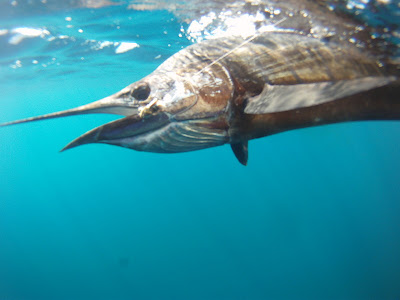 Franks sail prior to release 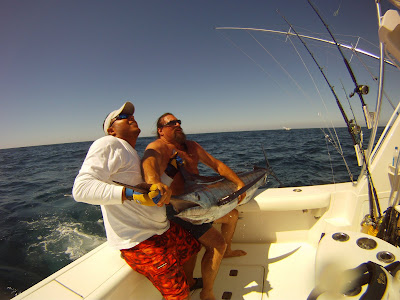 Big Rod with his blue caught on 30lb test
The guys had a blast and all commented on the great accommodations and exceptional food down at SAILFISH OASIS and had a great time fishing aboard ALLURE. We had a good time fishing with them as well enjoying the banter and hope to see them back here soon.
There seem to be plenty of smaller blue marlin around right now that are great teaser fish so they’d be ideal for the fly, flyfishers…..treat yourself for Christmas.
Come down and experience it for yourself, fly or conventional fishing, get hold of us to ensure your booking as the dates are filling fast.