A GREAT END TO THE SEASON, AND AN IMPRESSIVE START!!! 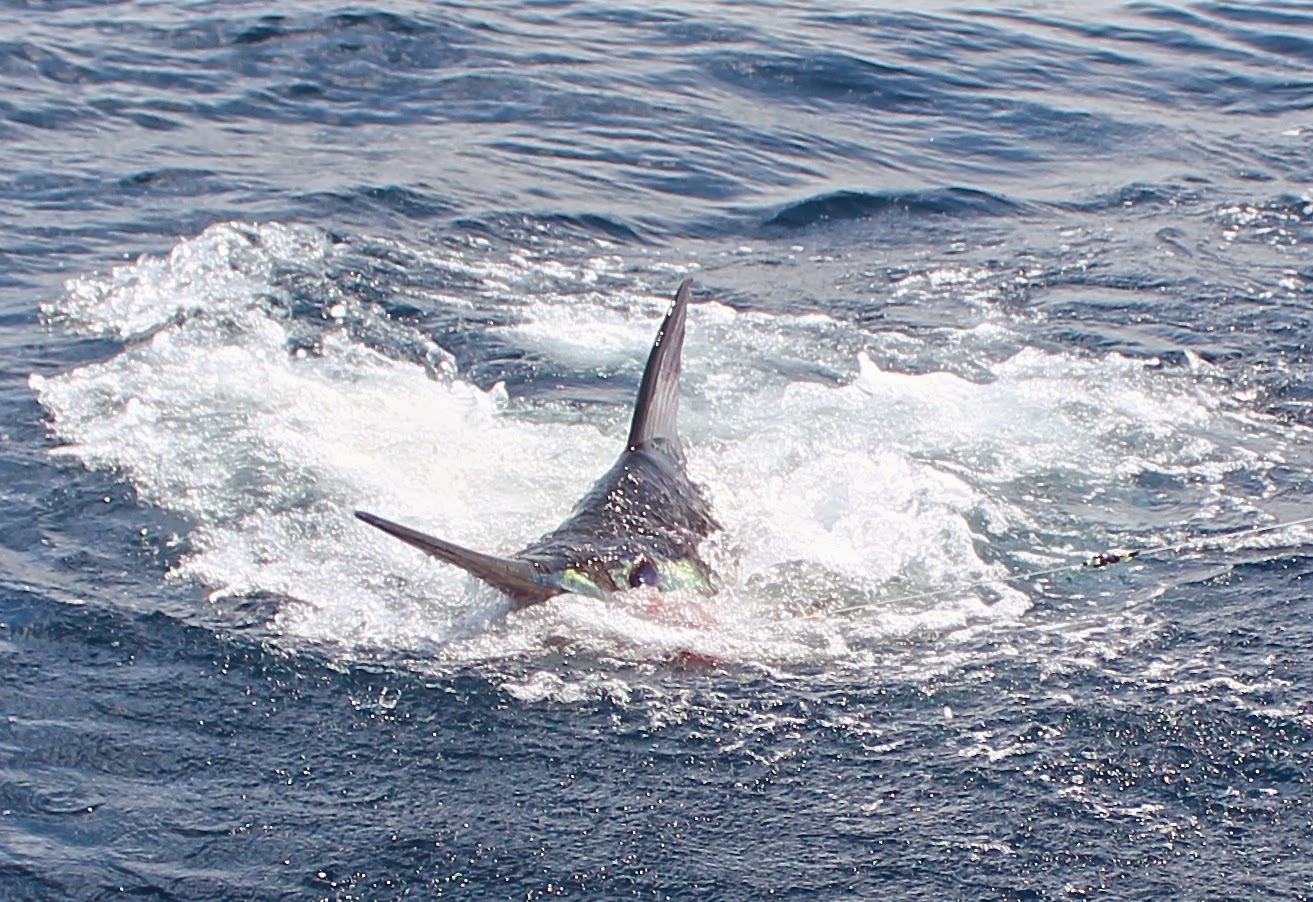 A quick post here from the crew at the Oasis and Allure. The last month we have been super busy with Lodge and boat maintenance though we are now back in the water and Lodge is back up and running with many improvements!
19 SAILFISH AND 2 BLUE MARLIN
To the fishing…..October 24-25-26 to finish off the ’13-’14 season Allure owner Hill Dishman was back down with brother Jamie and friend Casey McDermand. We ran out wide the first day and found some fish later in the afternoon after a slow morning hunting, a reasonable bite out there in the last couple of hours with 9 releases from 11 bites and a couple of mahi’s. 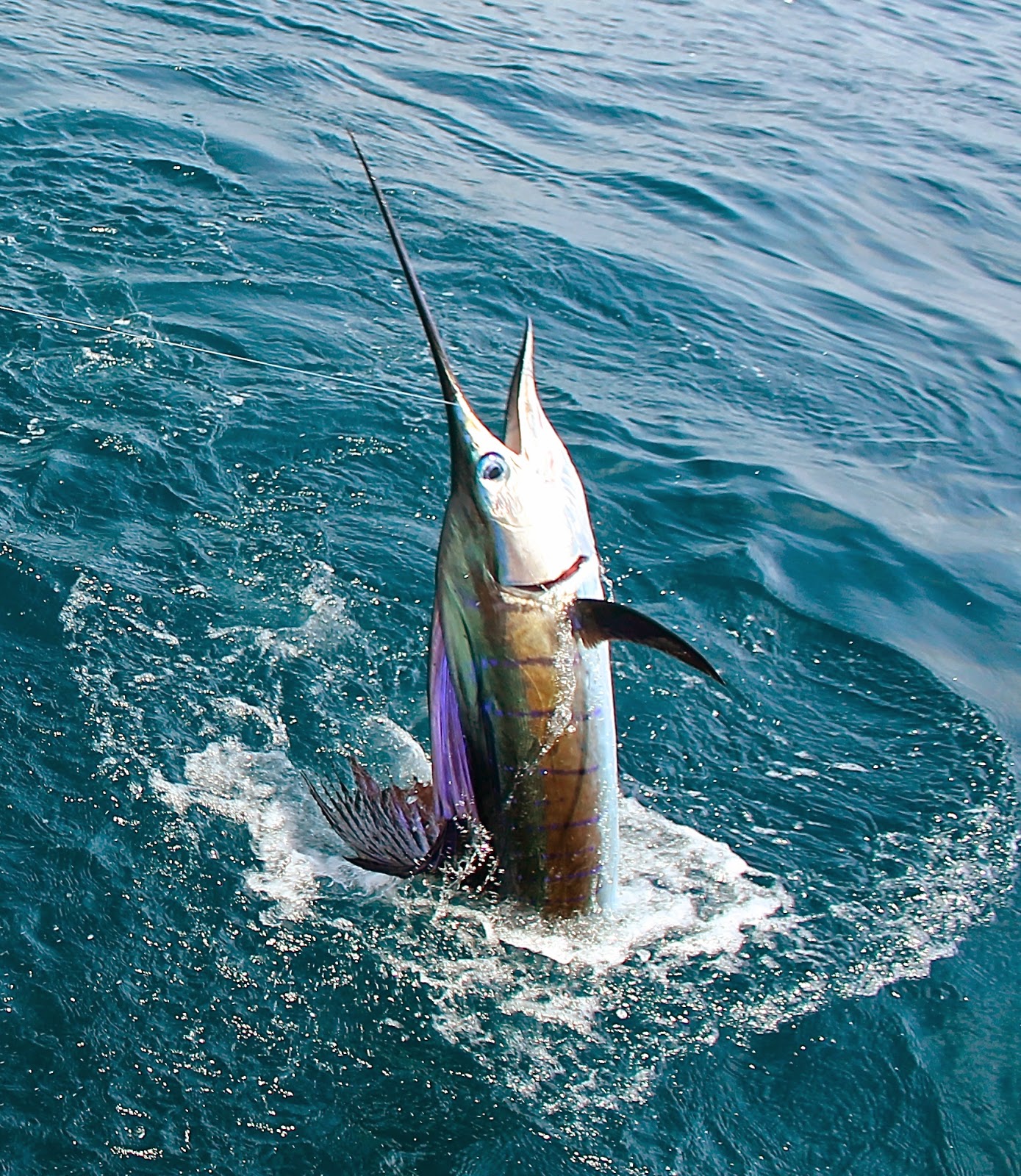 Beautiful colors
The next day we went out wide and experienced more of the same, a steady bite with 8 from 9 bites released and Jamie got himself a nice mahi right at the end of the day. The guys certainly made the  most of their opportunities over the last 2 days with just 3 fish missed from 20 bites! 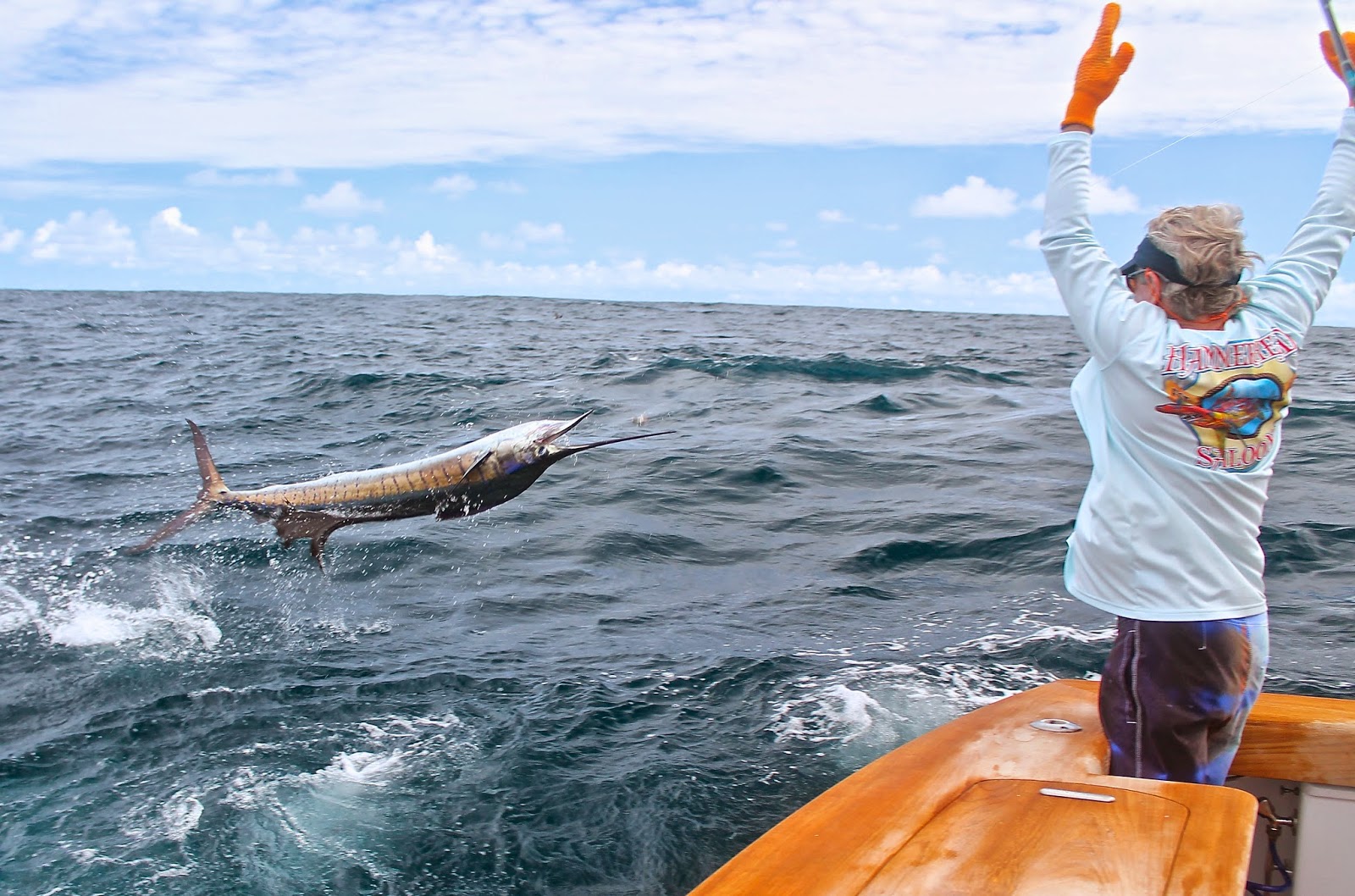 With at the best a clean green water out there we decided to look out to the east on our last day and found some beautiful water, a little cool though deep blue and it wasn’t long before we had a couple of mahi’s in the bin and a couple of sailfish releases. Into the deeper water a few miles off the edge we raised our first blue of the day, and from there on we found some good blue marlin action raising 5 blues and tagged and released 2 from 3 bites. We did the same on the sails, 5 raised and 2 from 3 bites and a couple of mahi’s to take home. A great day on the water for the crew!! 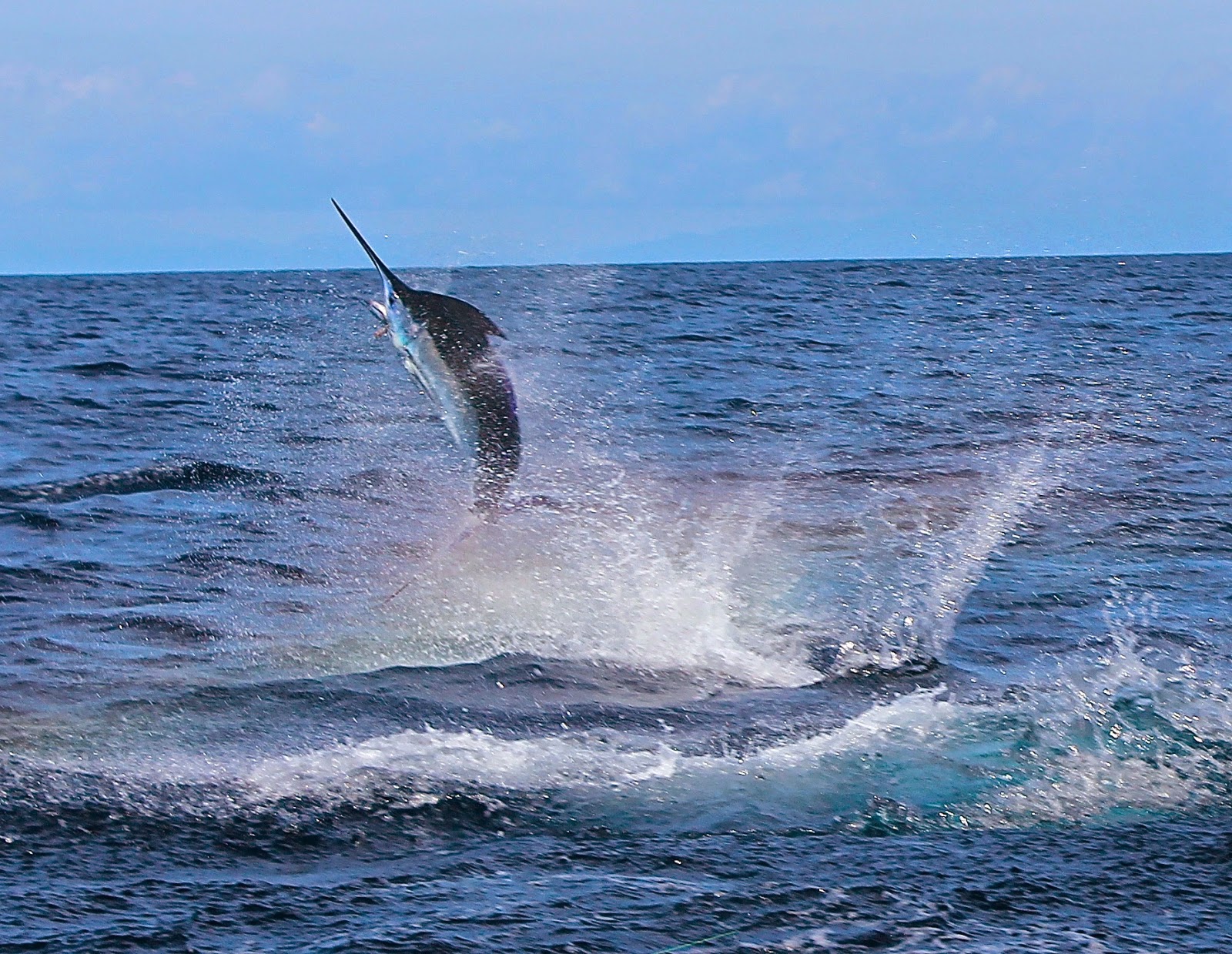 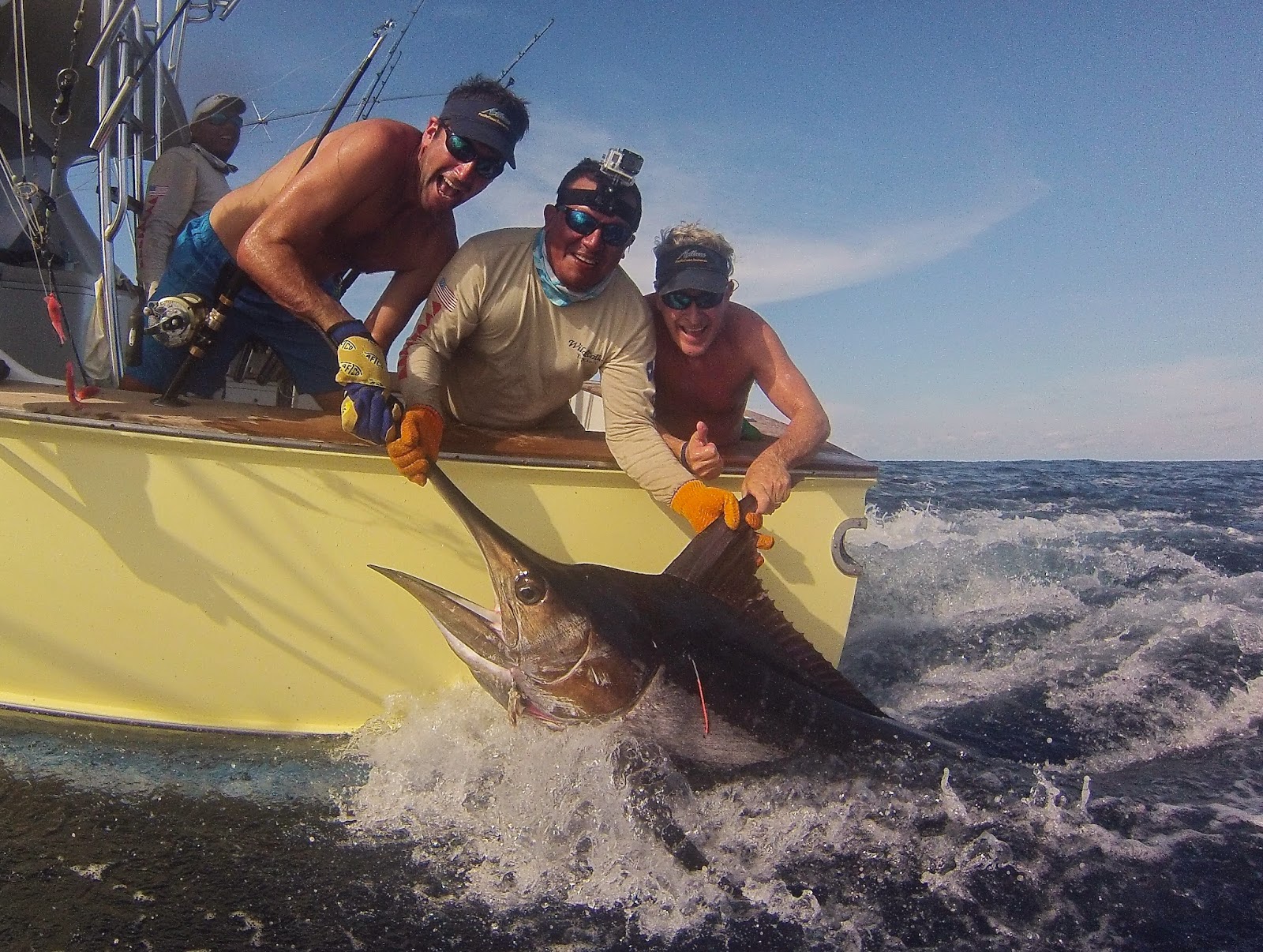 Last blue of the day for Hill…
To the start of the new season we fished a short day on November 3rd with Terry Atkinson and Kathy Taylor from San Francisco, leaving the dock mid morning and back soon after mid-day. Fishing the bottom of the pocket we boated a nice mahi and released 3 sailfish from 3 bites. 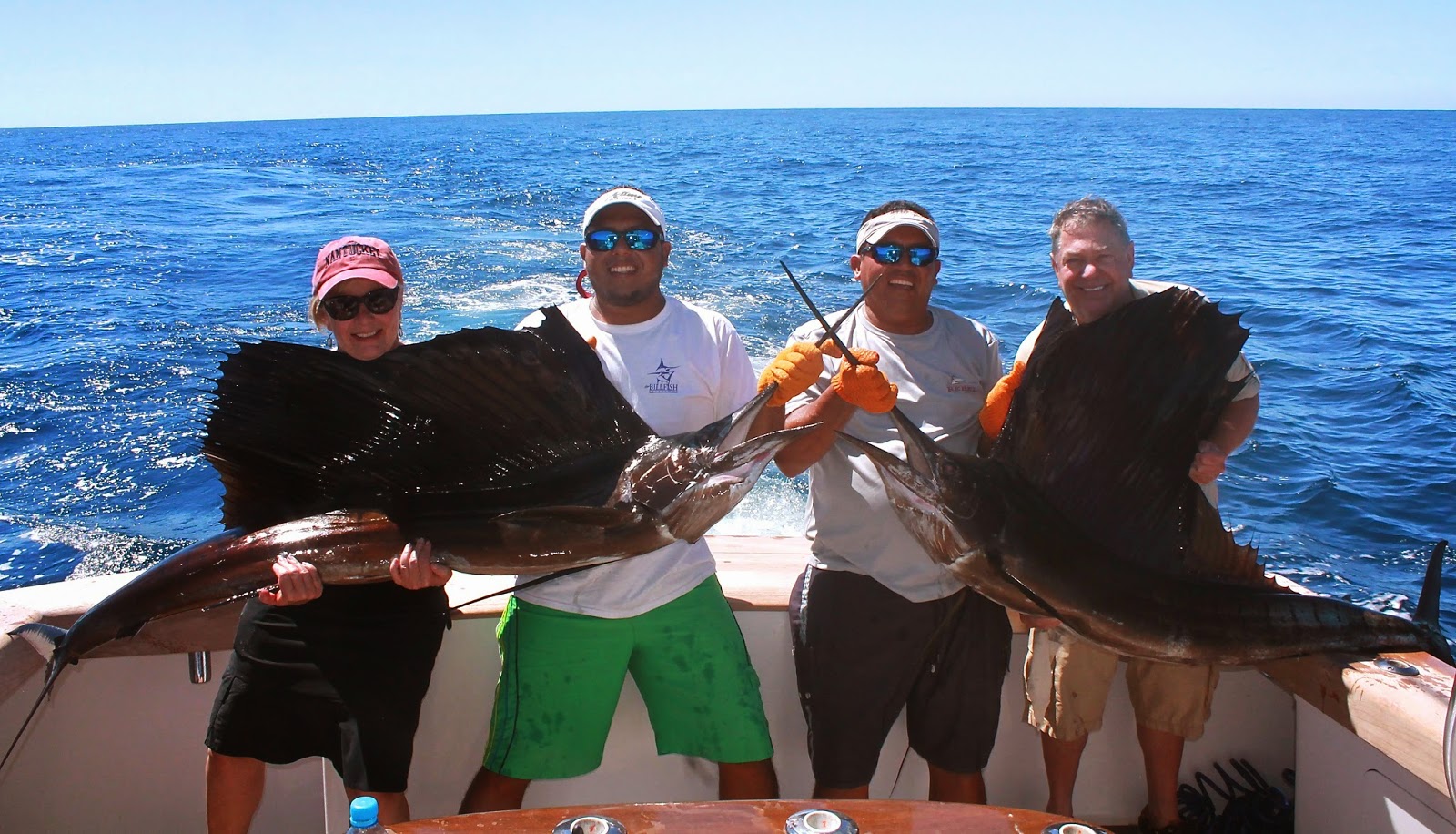 A great experience for them both and we applaud their fund raising efforts for the local school here, AIS.
OCTOBER 5th, 30 RELEASES FROM 37 BITES!! 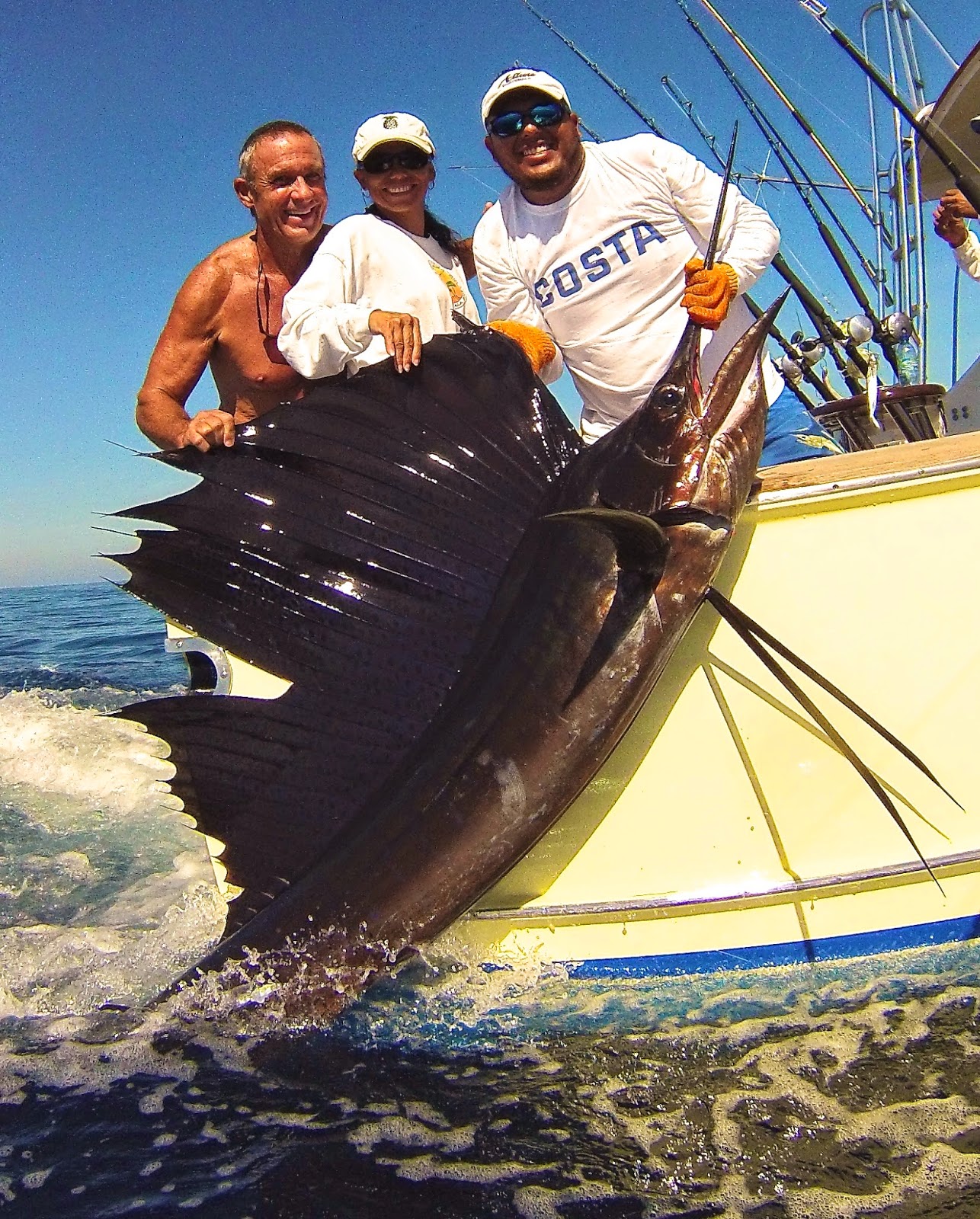 James Cambridge and Monica Guevara with one of many!!
Right now we are counting down to the 2014 Guatemala PCCA tournament kicking off tomorrow, Nov 7th. We fished a practice day yesterday with our crew representing TBF, Mick Childs from Hawaii with James Cambridge and his girlfriend Monica Guevara from Costa Rica. To the west of the pocket we fished a large area and had a great day just 15-18NM off the brerakwall. The crew fished extremely well, dusting off the cobwebs and released 30 sails from 37 bites with 39 in the spread for the day. There was one other boat out on the water, they went out to the western edge 42NM out and found an even better bite. A lot of fish out there right now and we are hoping they stick around for the tournament!! It is looking good though, more reports to come…
Get in touch with us to get yer mug in the picture!! We are filling up dates for the season ahead fast, don’t miss out…..contact:
liz@sailfishoasissportfishing.com