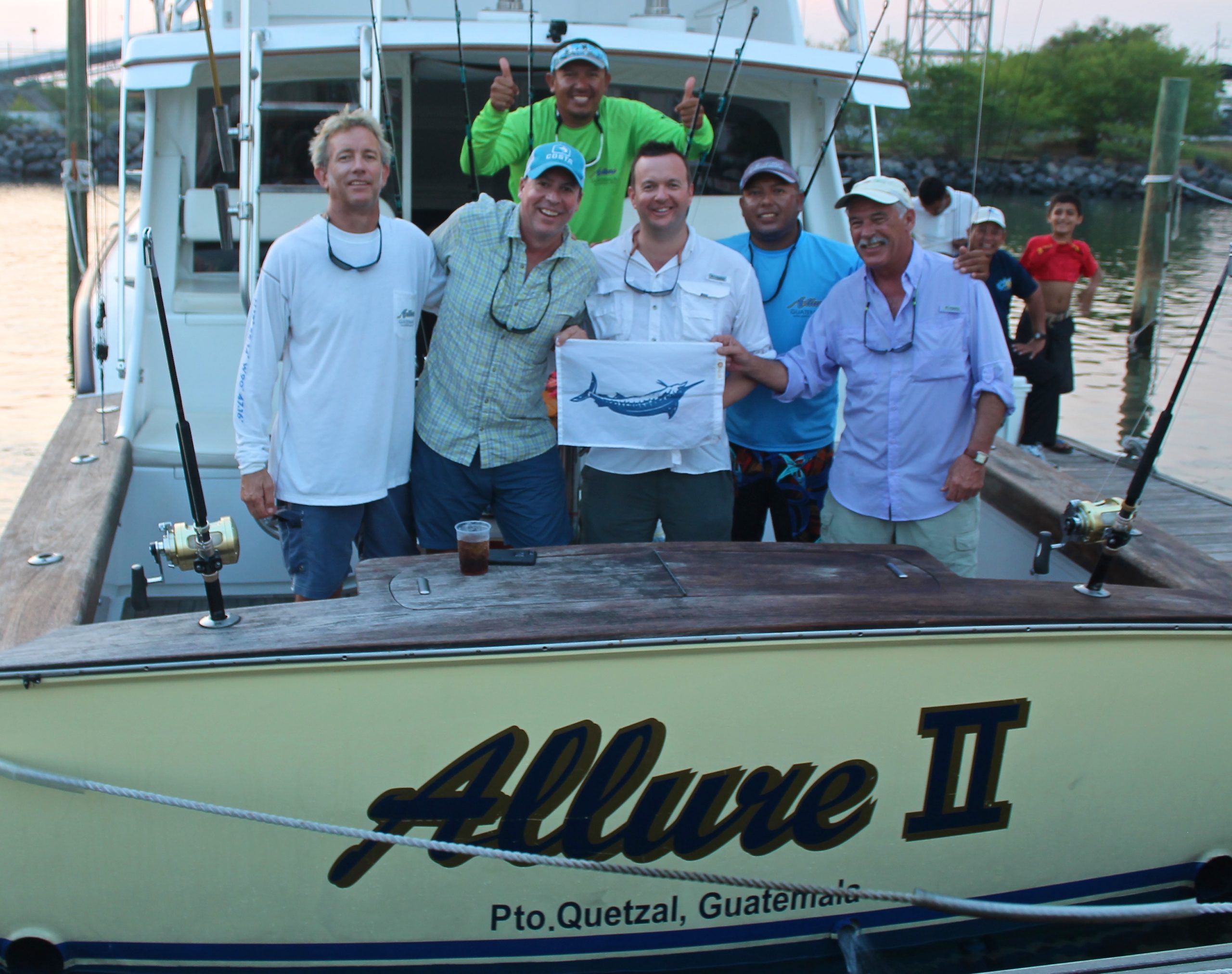 December 2 & 3 had a great time fishing with our good mate Brian Shinkle, his nephew Charles Sumner for his second time with us on ALLURE II and Peter Gray all from St Louis. First day out we worked the first drop off here at 8-10NM in beautiful conditions, flat seas and the fishing was consistent right through the day with 15 sailfish releases from 23 bites. 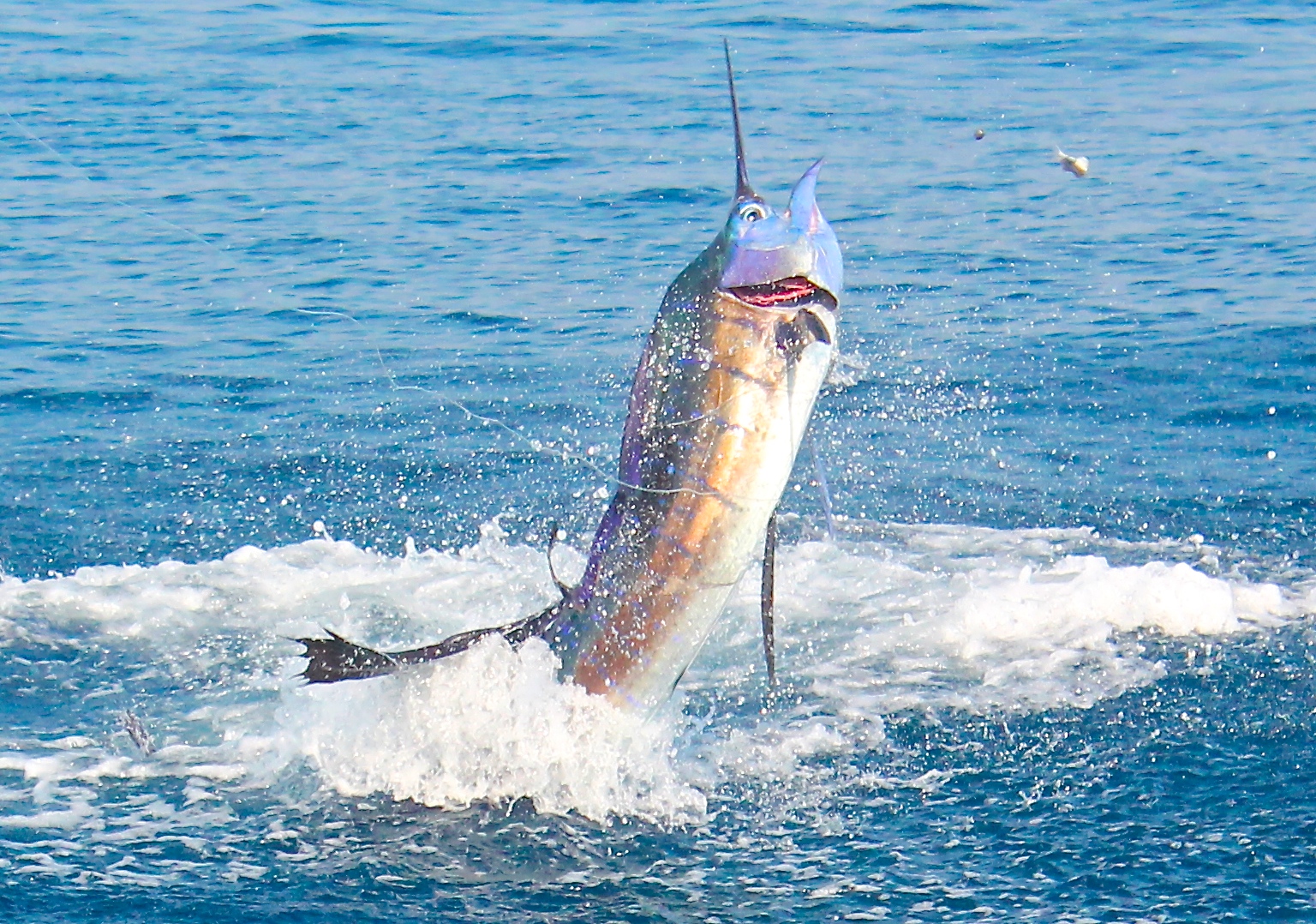 Just before midday we raised a hot blue marlin on the left teaser and got the bite on the mackerel, came tight and the fish came charging at the boat, a nice one of about 300lb+ that threw the hook on the 3rd jump…. 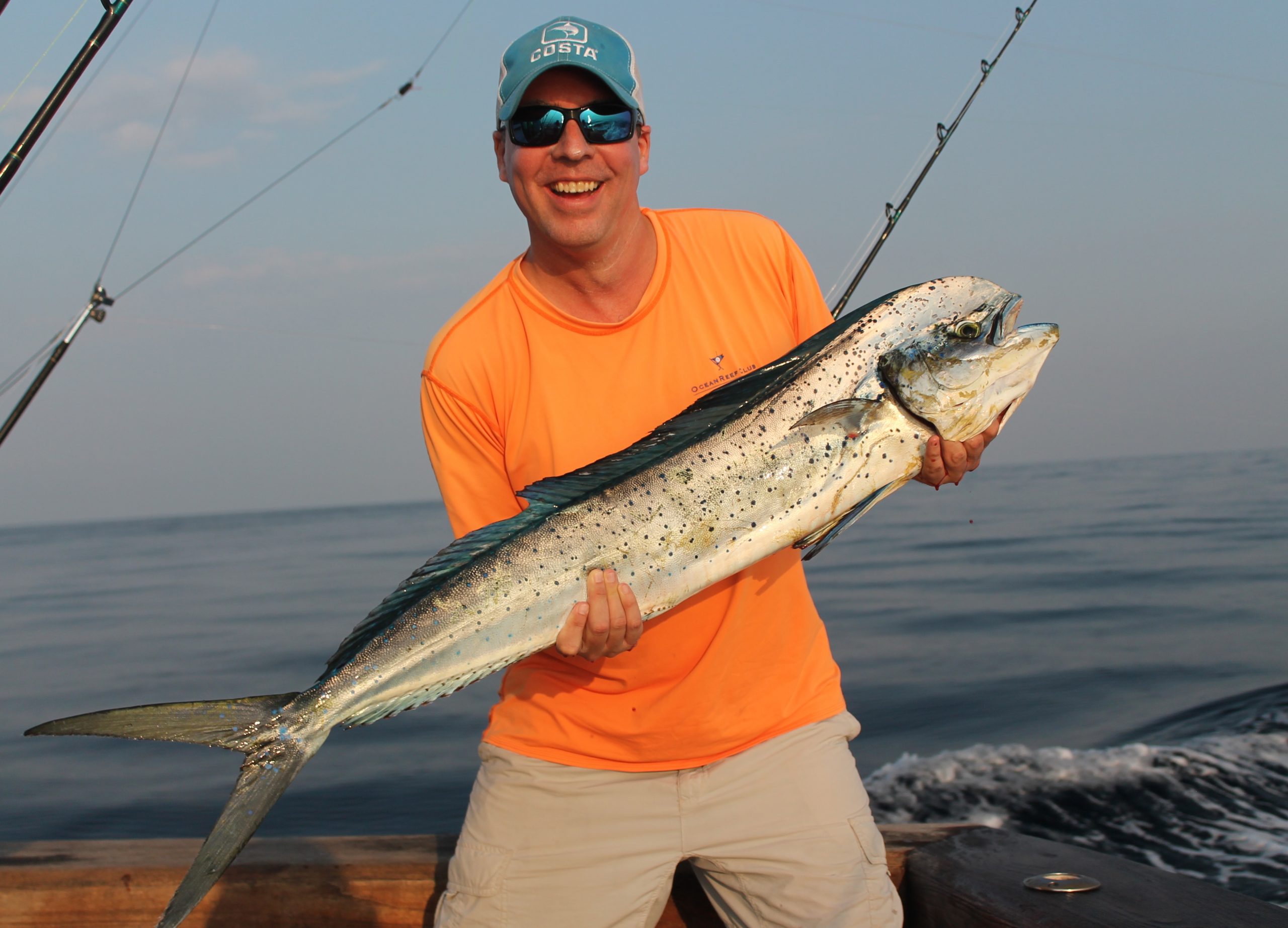 Next day out the fish were mainly coming up on the rigger baits more than the teasers and were biting a bit funky resulting in a few too many off these: 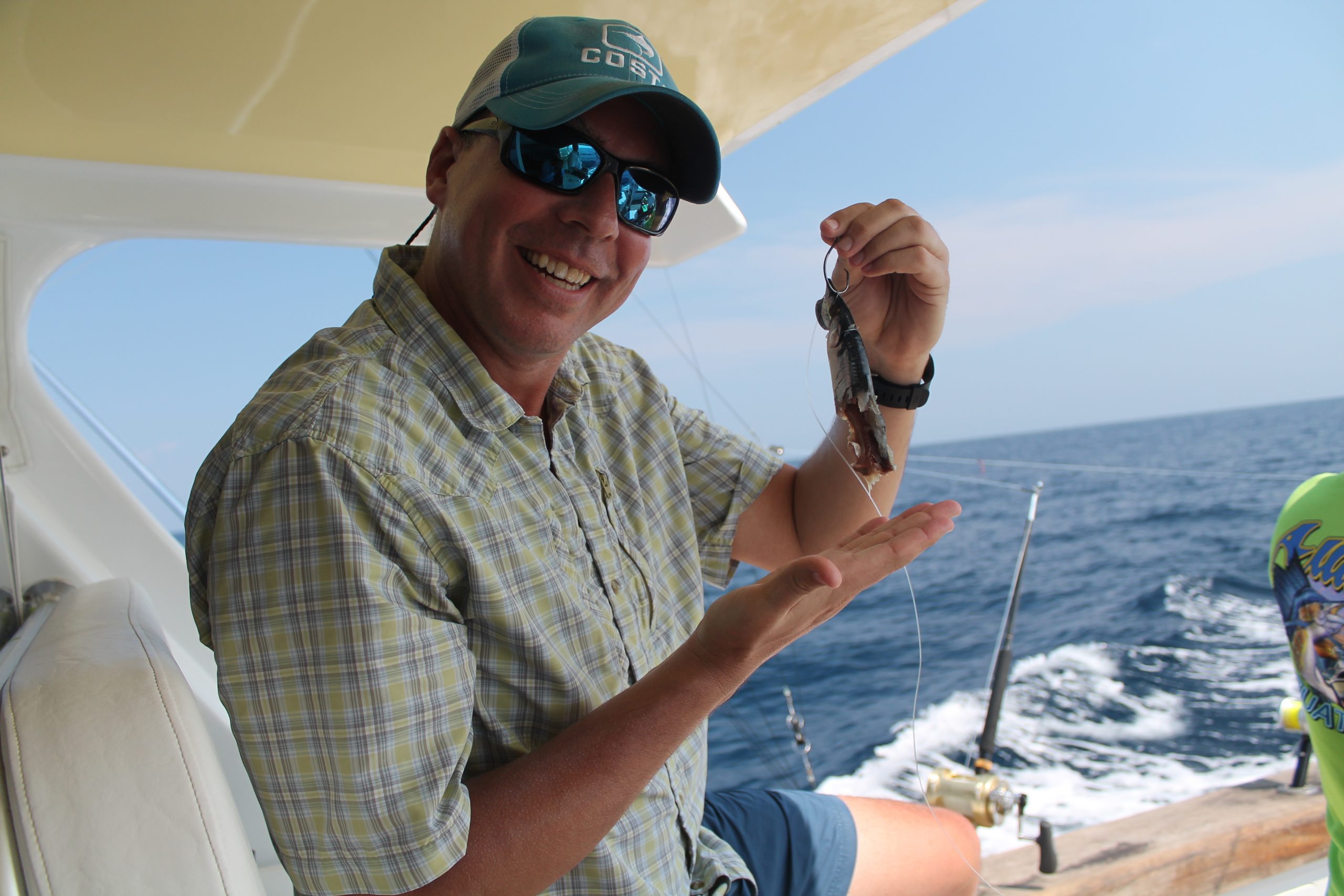 Still an awesome day out there with 9 sailfish released from 20 bites, some big fish in the mix too…

About mid morning we had a hot blue on the right short teaser, we got a funky bite on the pitch bait where it all looked good though the mack came back unmarked. With the bite slowing in the afternoon we ran back a few miles off the drop and marked massive wads of bait in the upper water column and in the dying minutes of the day raised the one we were looking for, a red hot blue that charged in all over the teaser, aggressive bite on the mackerel that Brian did well to control and he got the release on a blue of about 250lb 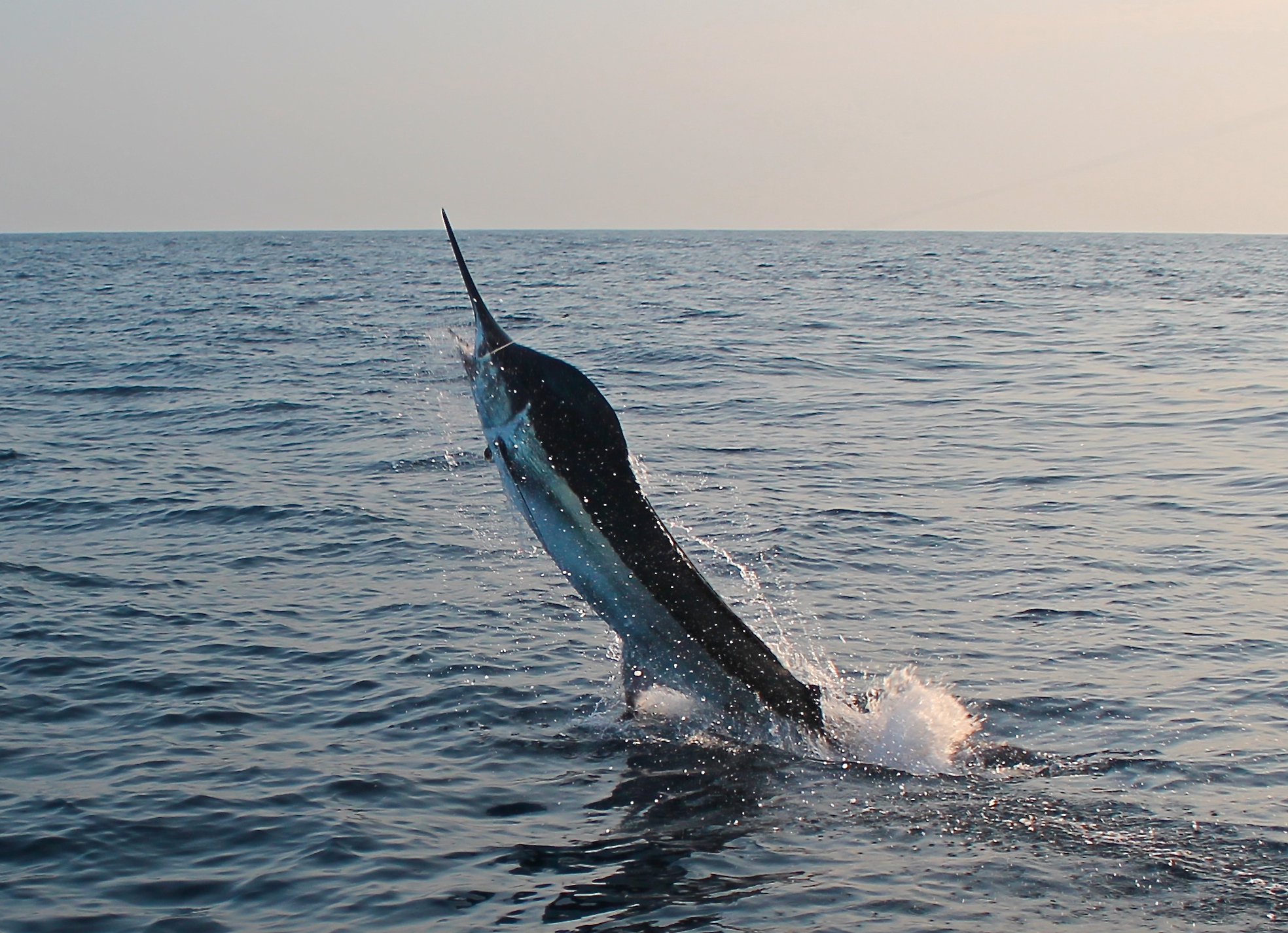 Great way to finish off a fun 2 days on the water. 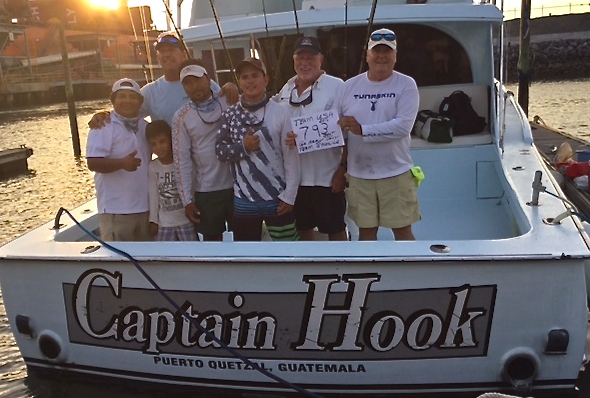 Dec 9-10-11 we welcomed back the above crew and OASIS regulars for the first of their ’16-’17 season trips to Guatemala fishing with the Capt Hook. Team USA fished their last trip for 2016 in Guatemala after their earlier trips here Jan through April and then the tournament series through Central America including Costa Rica, Nicaragua and El Salvador. They hit the fishing spot on with a 3 day average of 25 releases per day!! That gave Team USA an incredible years end total of 792 billfish releases for 2016. Congratulations to them and we’re looking forward to seeing them here in the coming season. 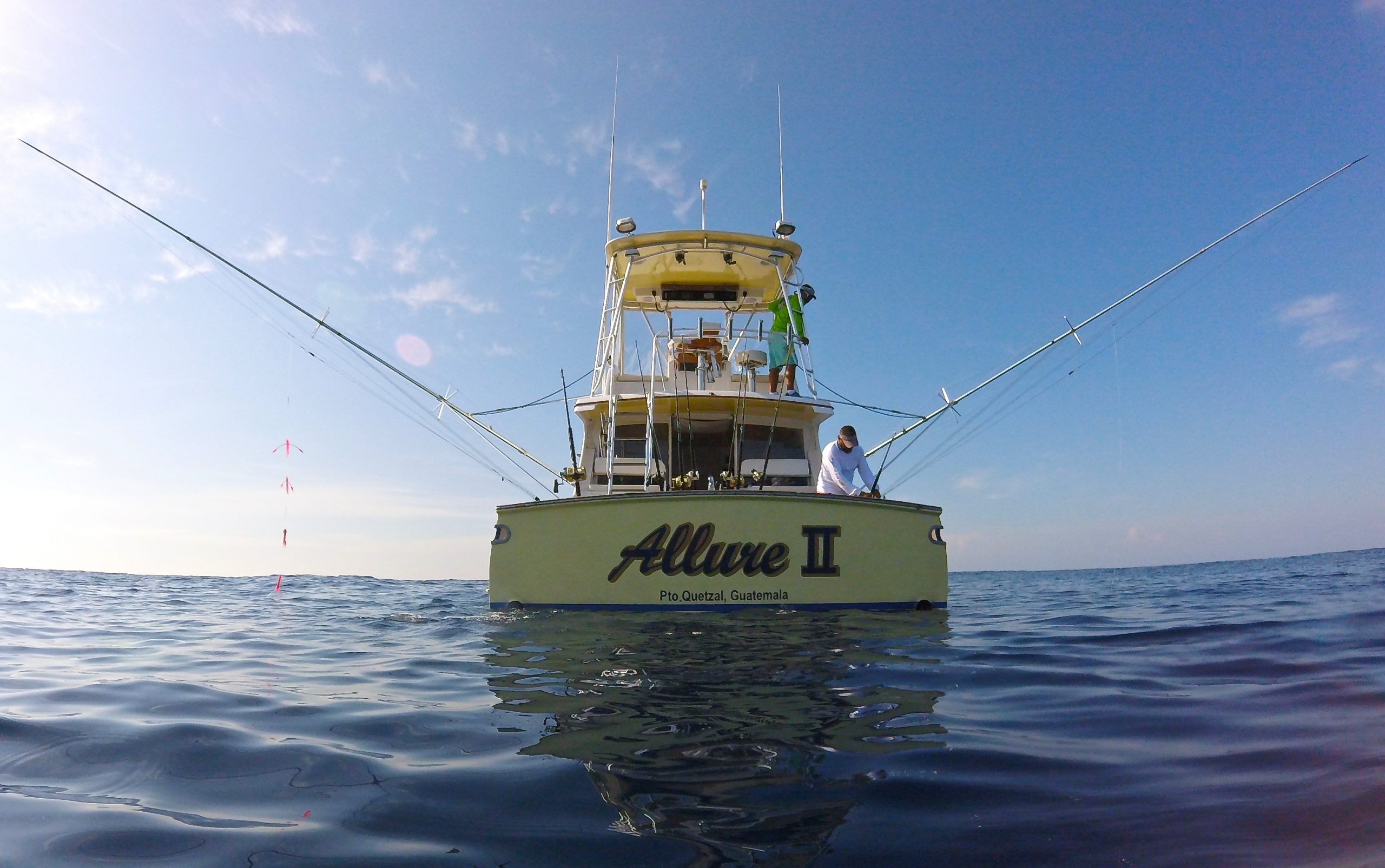 Spectacular afternoon on the water.

Friday, December 9th went out for a late afternoon fish with a buddy and Capt Julio on the wheel. Nice to be in the cockpit for a change catching fish! For our 2 hours on the water we released 7 from 10 bites, some great bites off the teasers and overall a beautiful afternoon on the briny….. 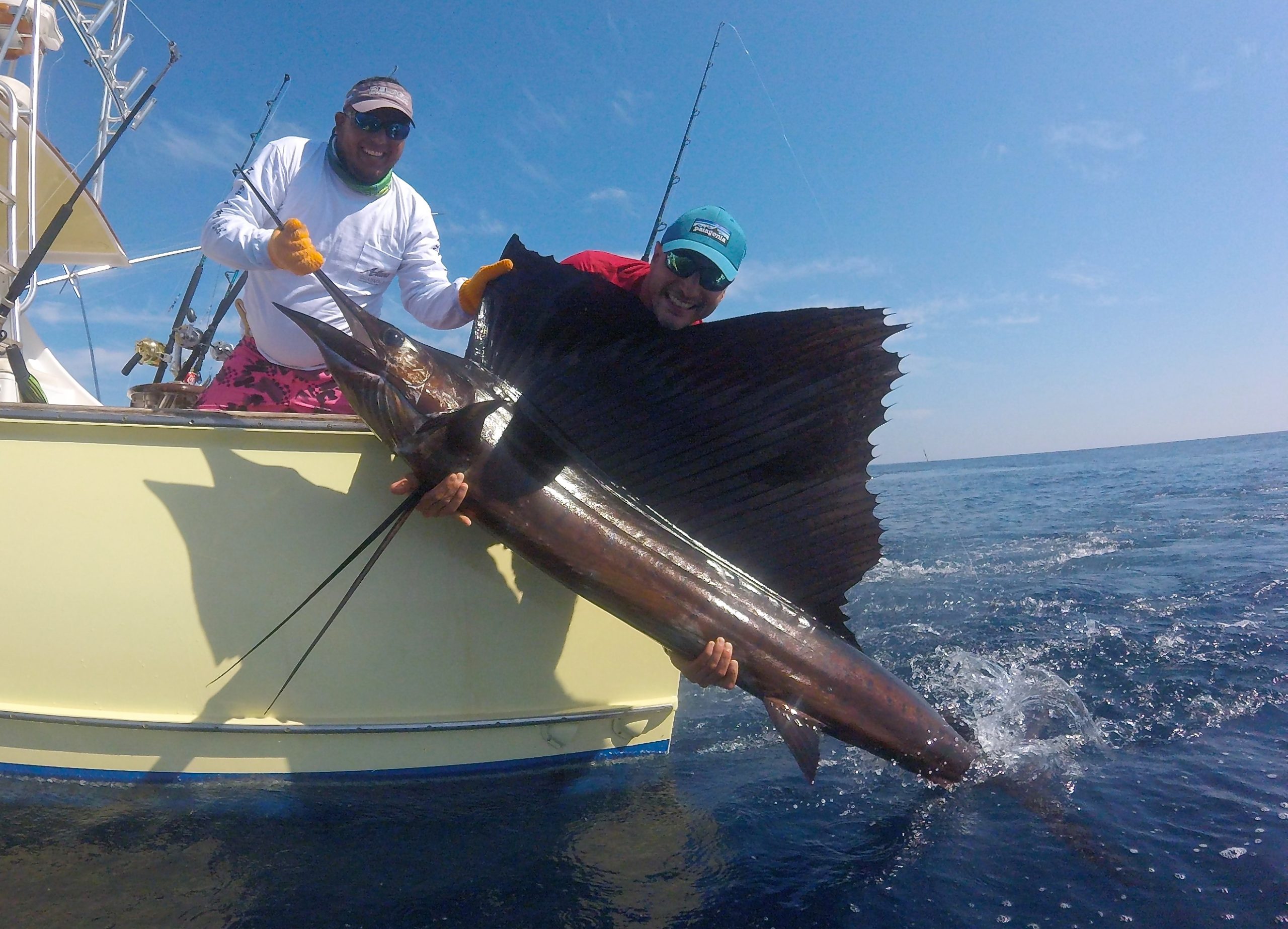 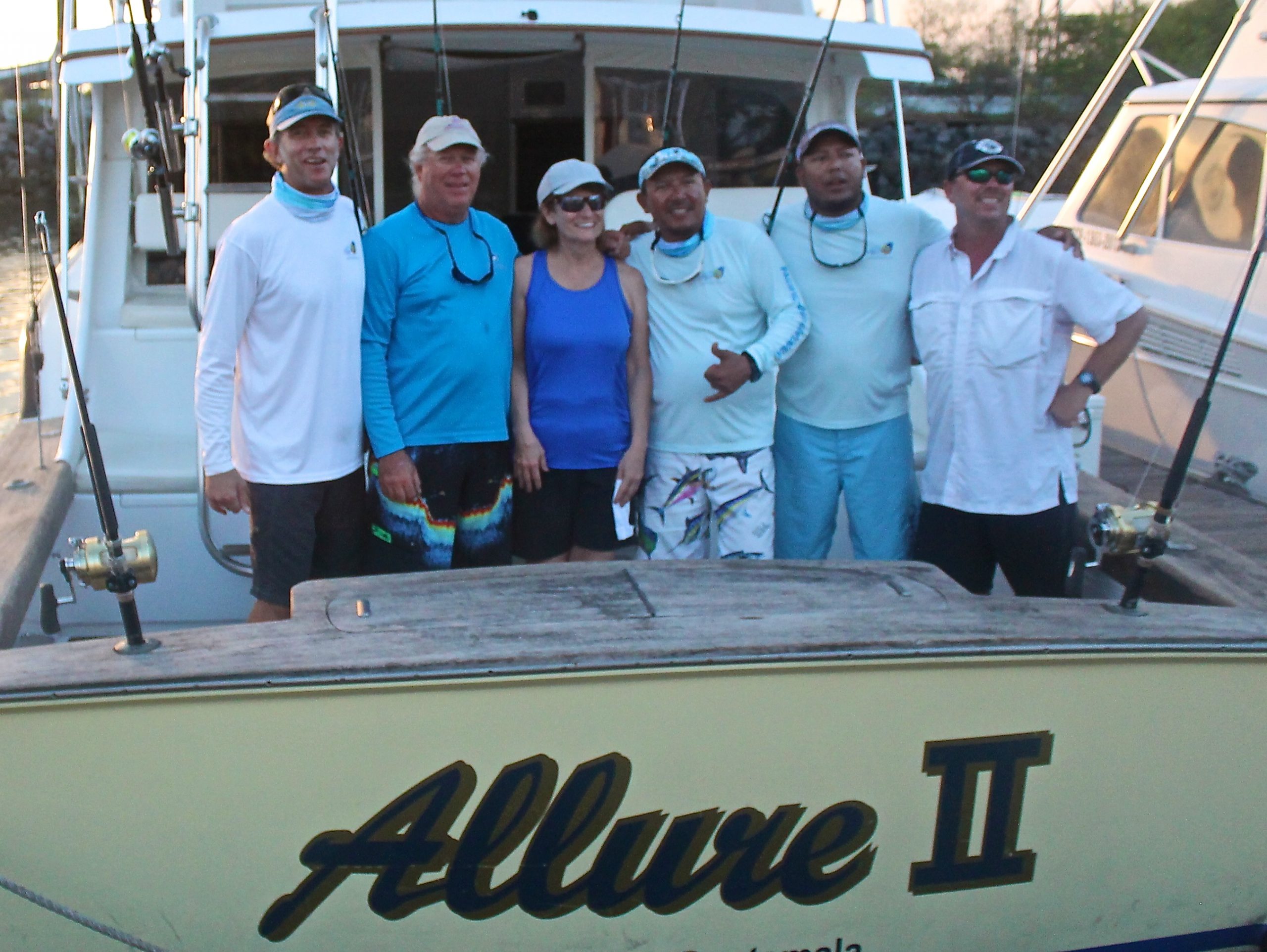 December 11th and 12th for their first trip to Guatemala from Seaport, Texas we had an incredible two days on the water with the above group of Fred Pyle and Jack and Carol Beal. Keen fishos that are very active in the Gulf coast tournament scene on Jacks 60ft Bertram this was their first taste of bill fishing with teasers and natural baits and what an introduction…..They got into it from the get go pitching baits to hot teaser fish and with the amount of shots we had it was the ideal trip to learn all there is know. At the days end we had 72 sailfish in the spread with 63 bites and they released 38. 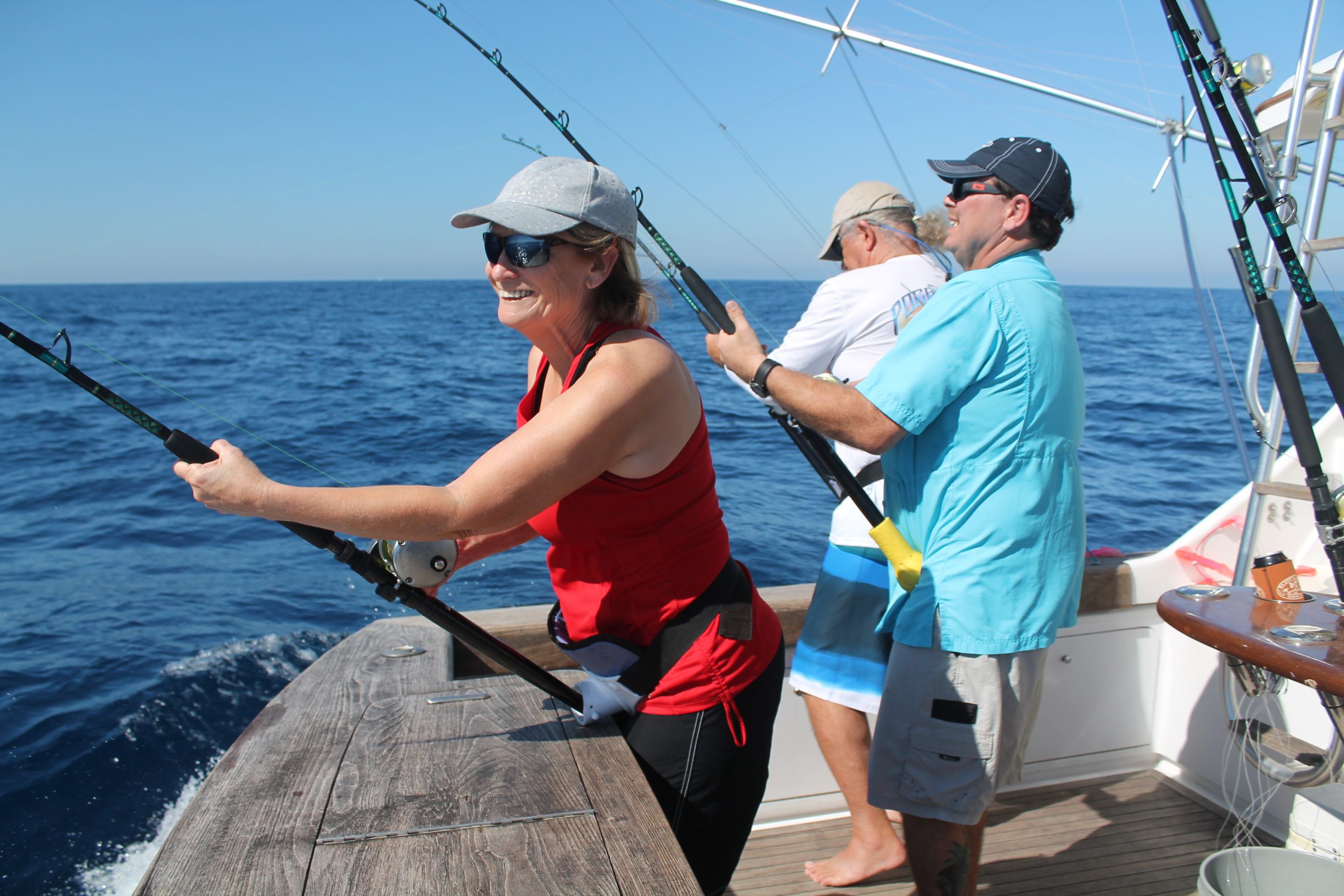 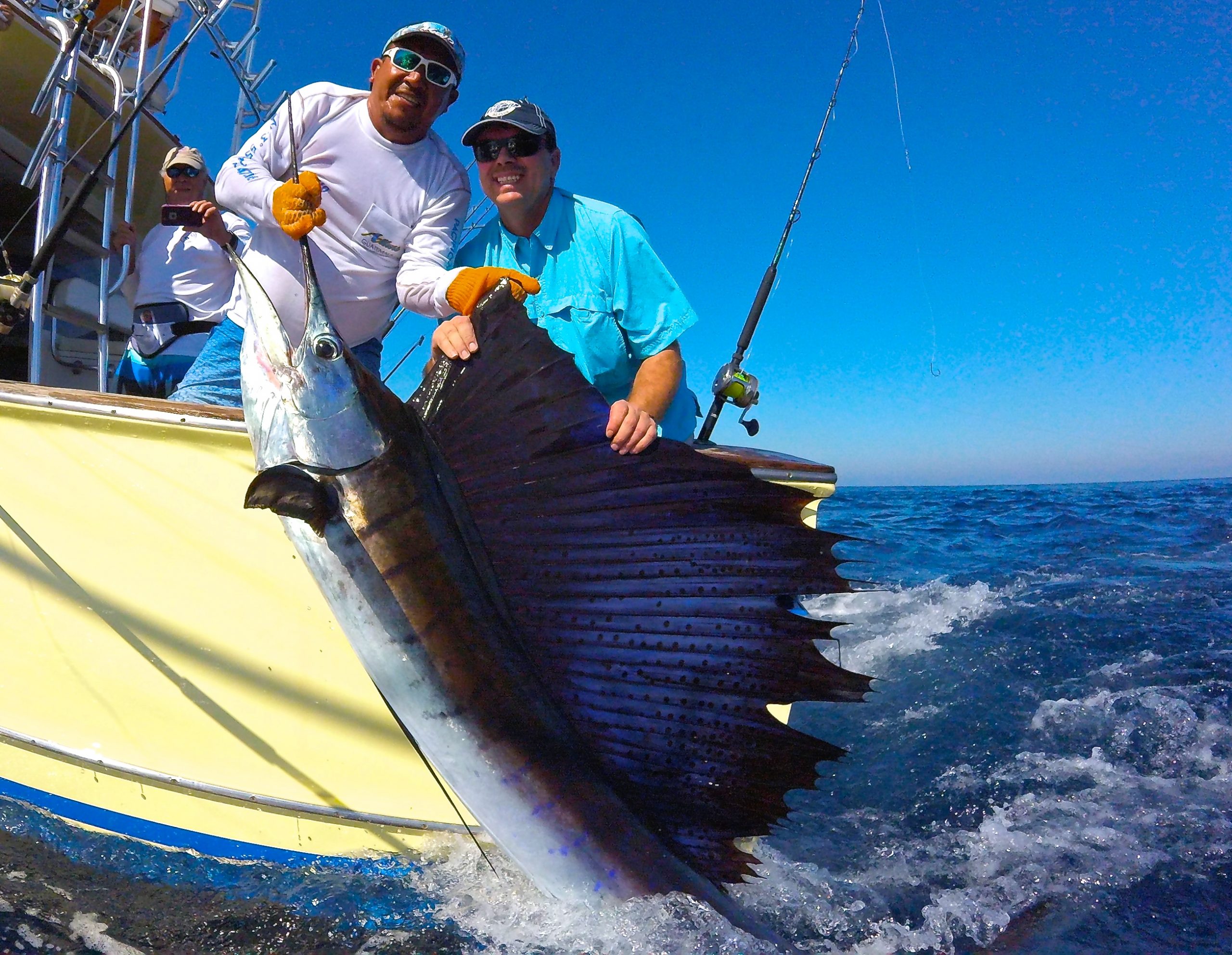 Next day out the bite slowed some from the previous day as we pushed off shore trying to find the main body of fish that we’d been on though still and excellent day with 43 sails raised and they released 22 from 37 bites to round off the trip on an even 60 sailfish released from 100 bites!! Great trip with a fun crew and we’re looking forward to seeing them back here in Guatemala as regulars from here on in. 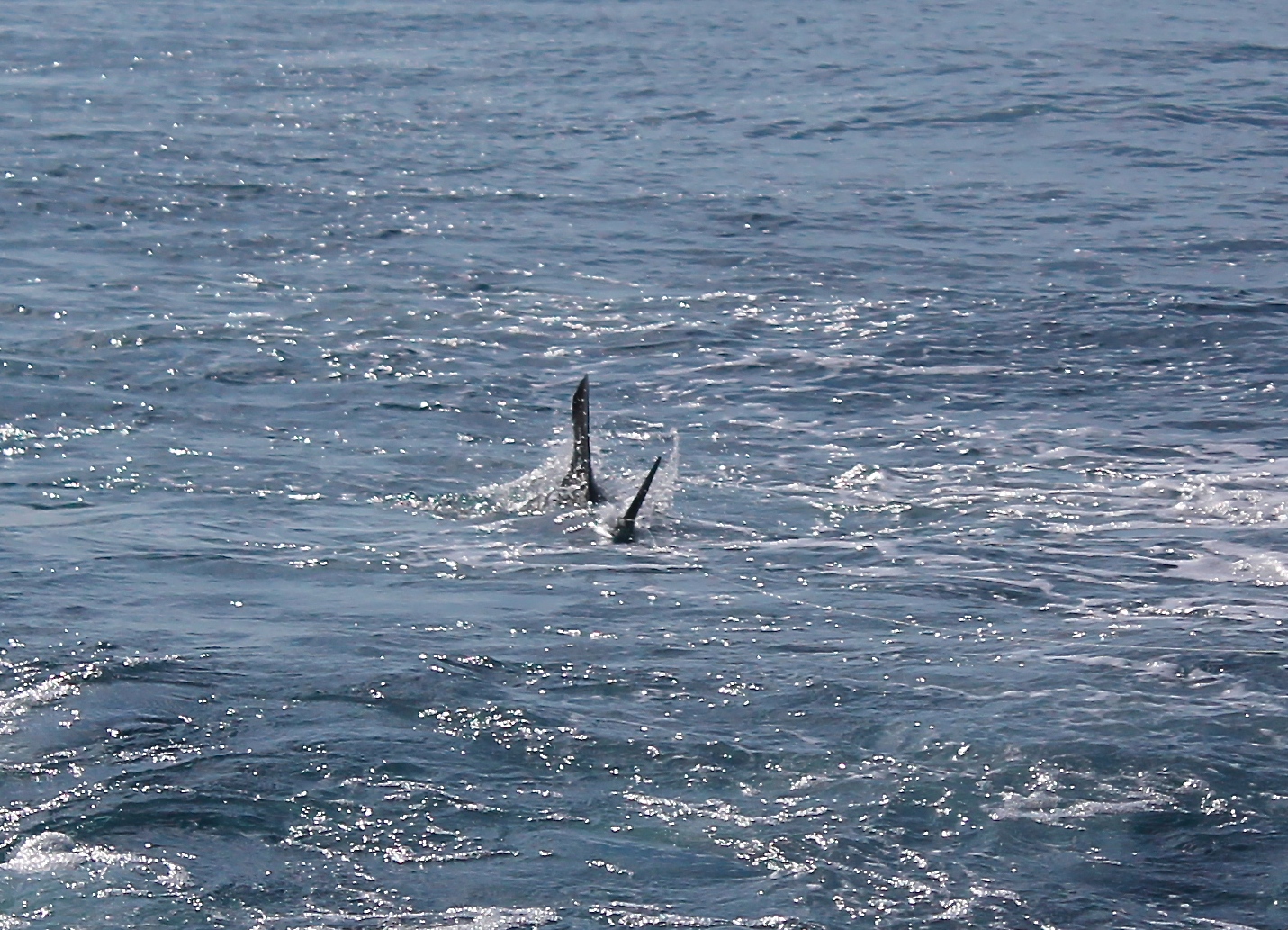 It’s all about the bite. A pitch bait about to be engulfed…. 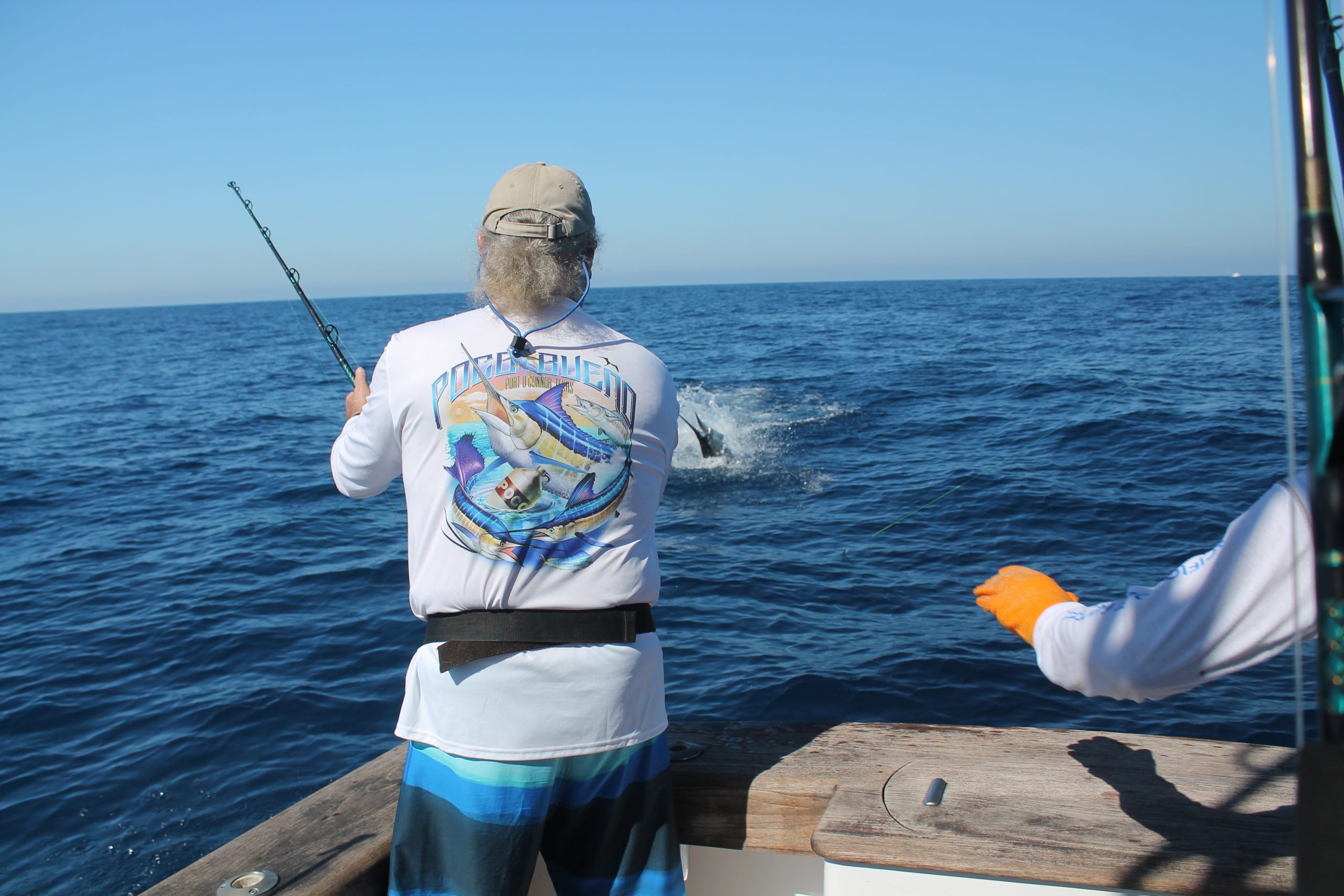 Jack about to get the release 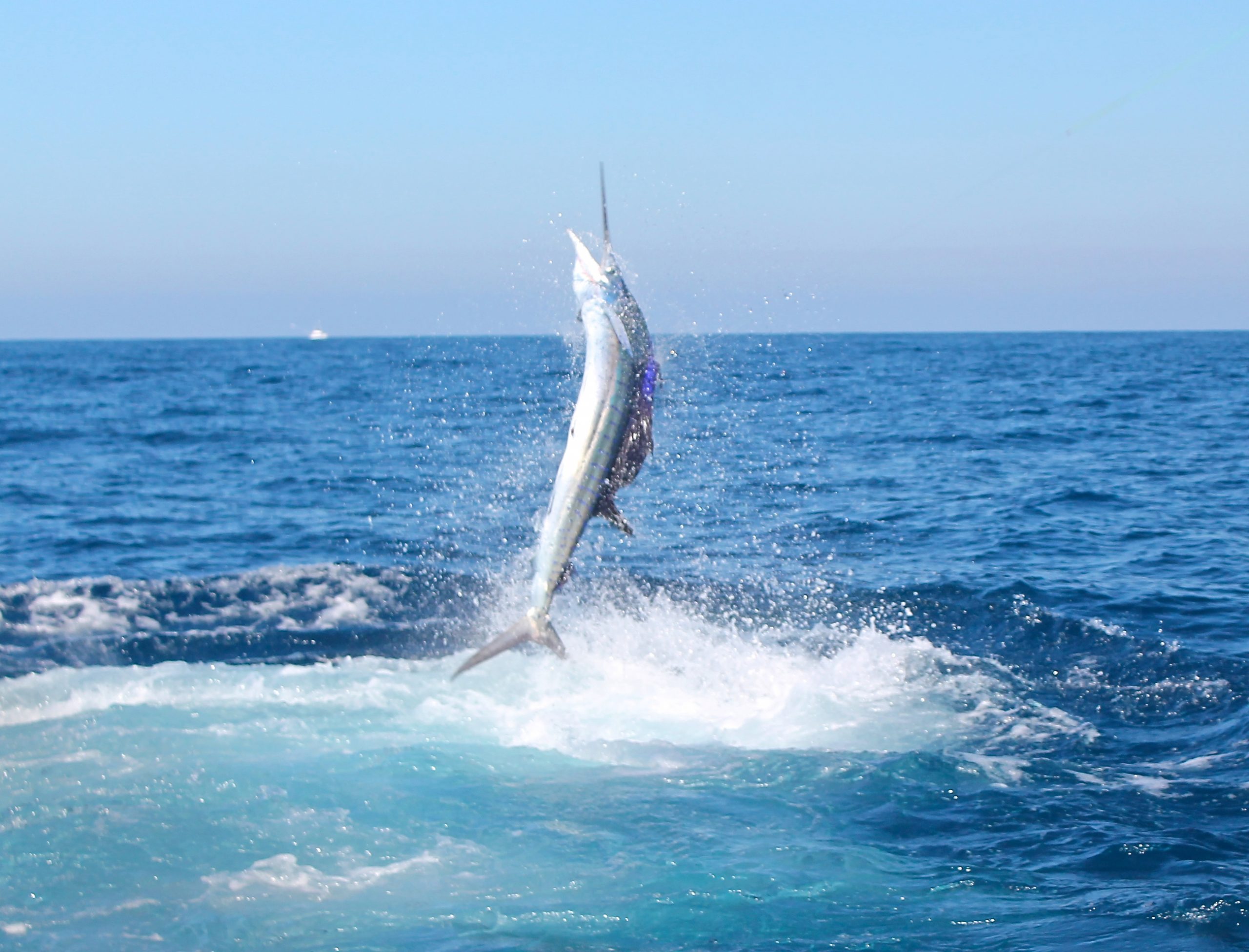 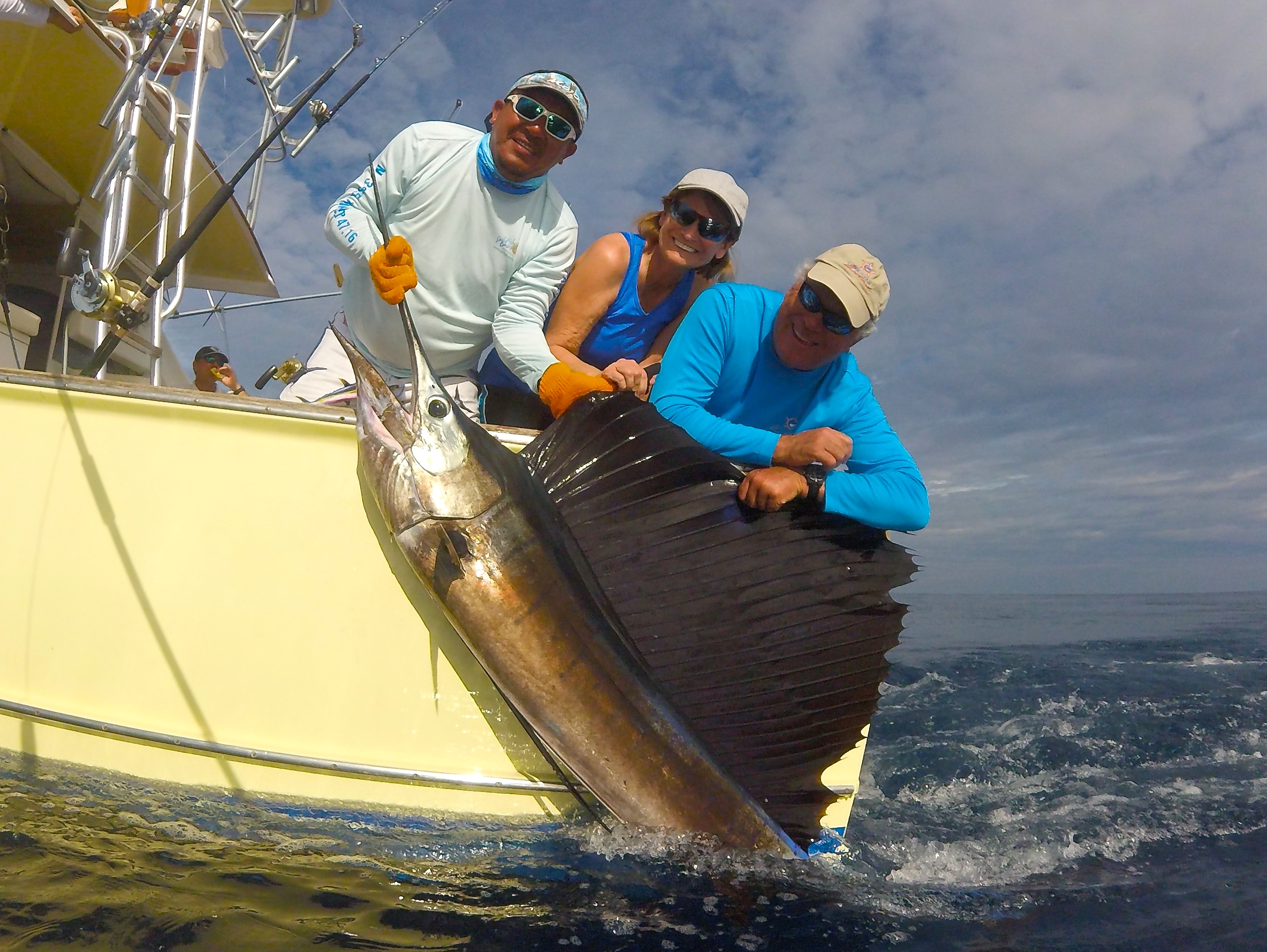 Carol and Jack with the 60th sailfish release for the trip 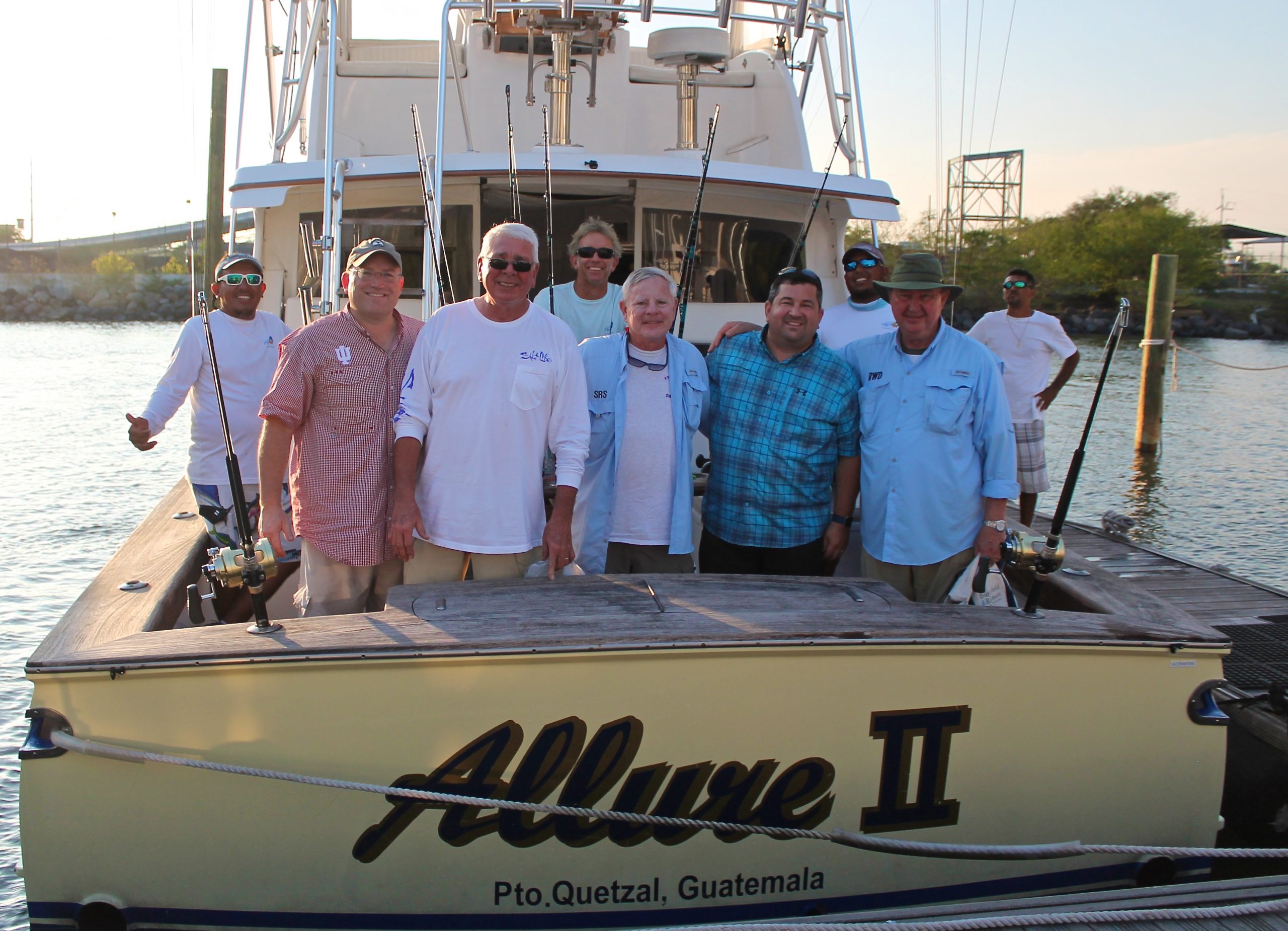 December 16th and 17th another group for their first trip to Guatemala and hailing from Texas to Illinois to Kentucky to Florida…..Chris Springer and friend Tres Sterett organized this trip for Steve Springers 70th birthday getting Steve’s good buddies and Ron Smith and Rick Douglas along. A great winter getaway with beautiful flat seas and the fish were biting. First day out we started at the 9NM drop off and raised 2 blue marlin in the morning session, we missed on and the other teased in though di not switch to the pitched mackerel…..no marlin luck though good to see all the same. For the rest of the day we pushed off shore and released 11 from 20 sailfish bites before hitting the dock early where the crew enjoyed the poolside bar at the lodge for the rest of the afternoon. 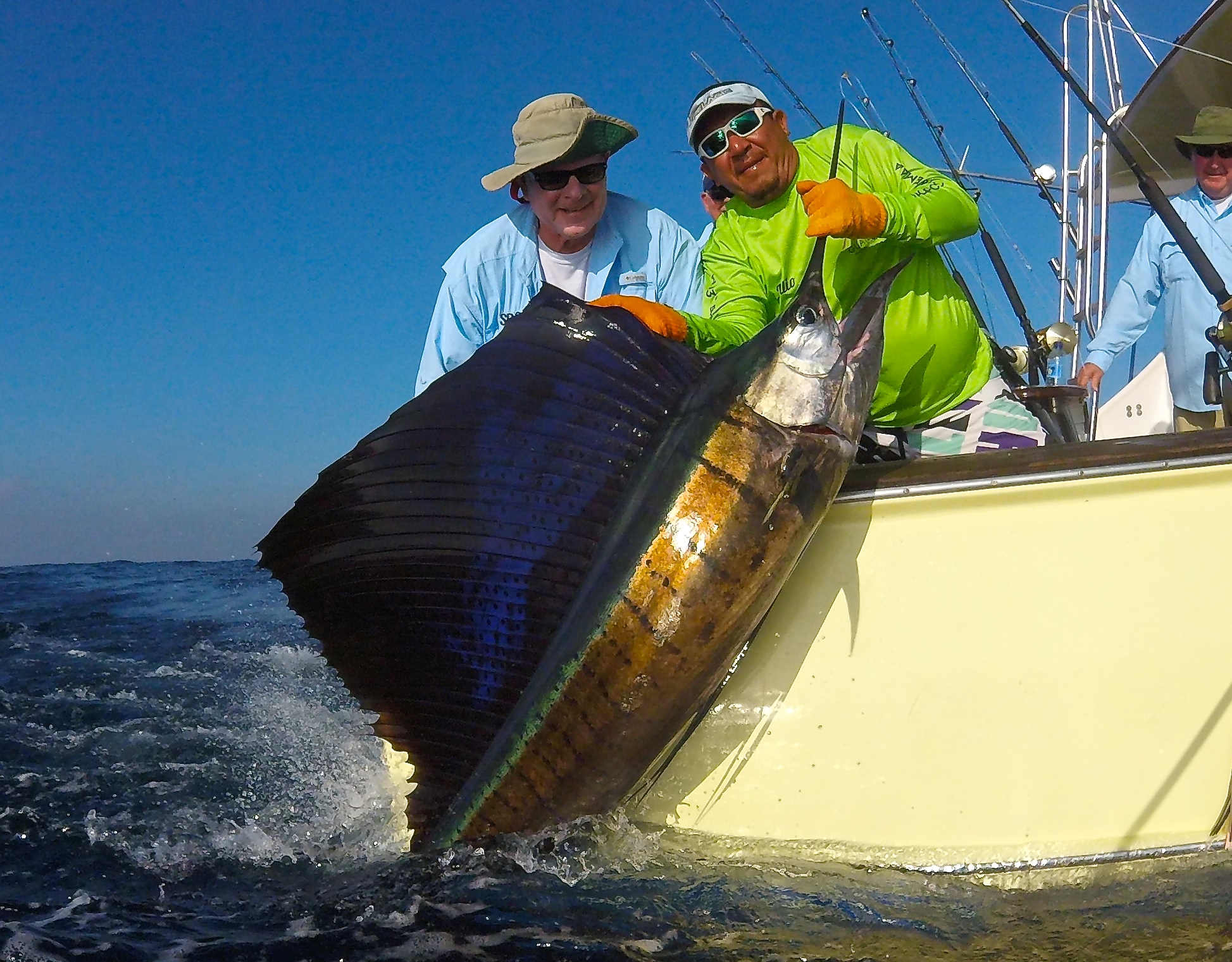 Steve Springer with his first sail 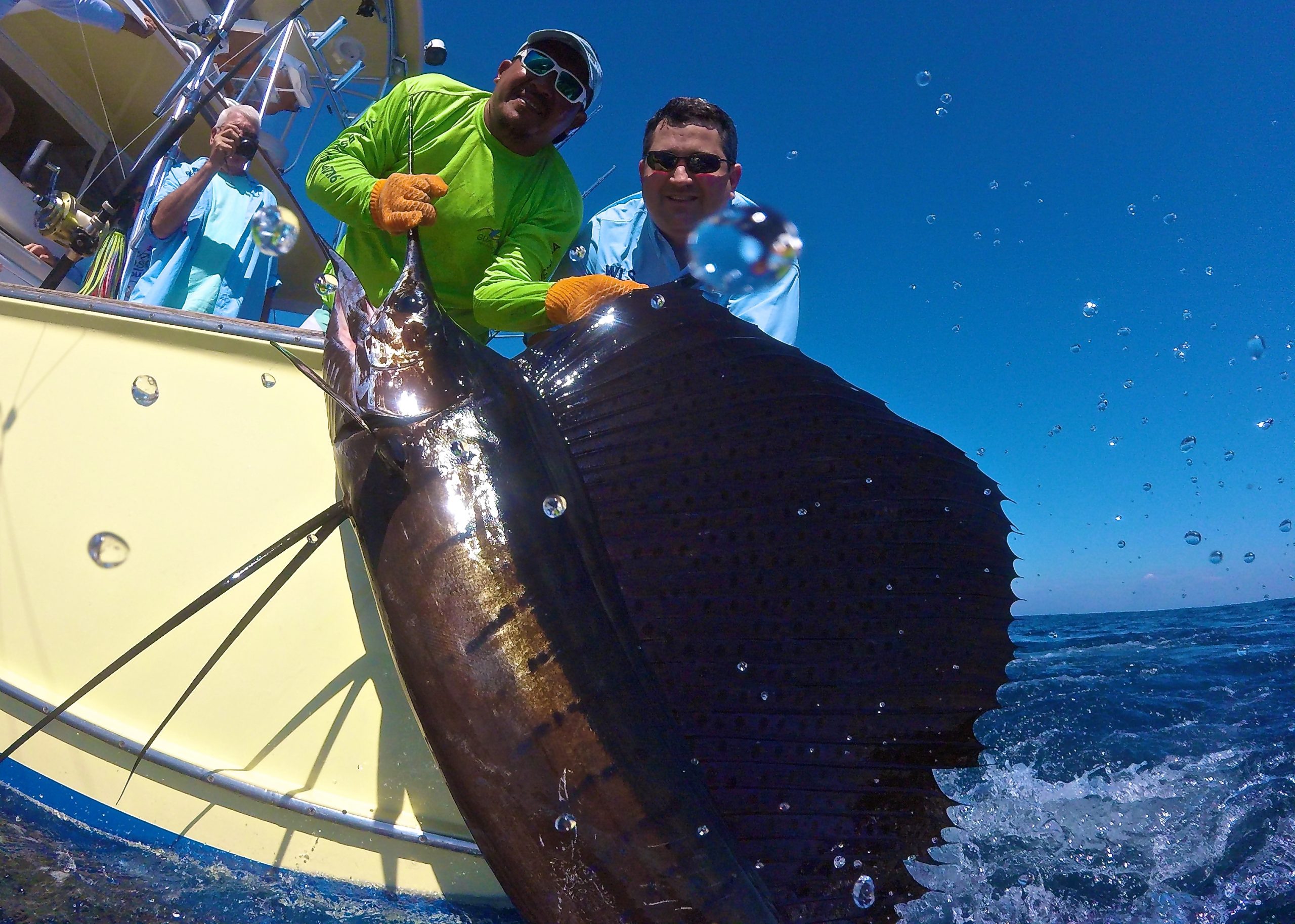 Tres Sterett with another fat fish…

And Chris with his.

Next day out the bite slowed down some with the green water pushing in so we ran off shore to the west where we got into blue water and a good afternoon bite. A bit of trouble having the hooks stick again today though some great fish in the spread with a cover-up of 6 sails behind the boat, from the resulting quad hooked up we released a triple header. 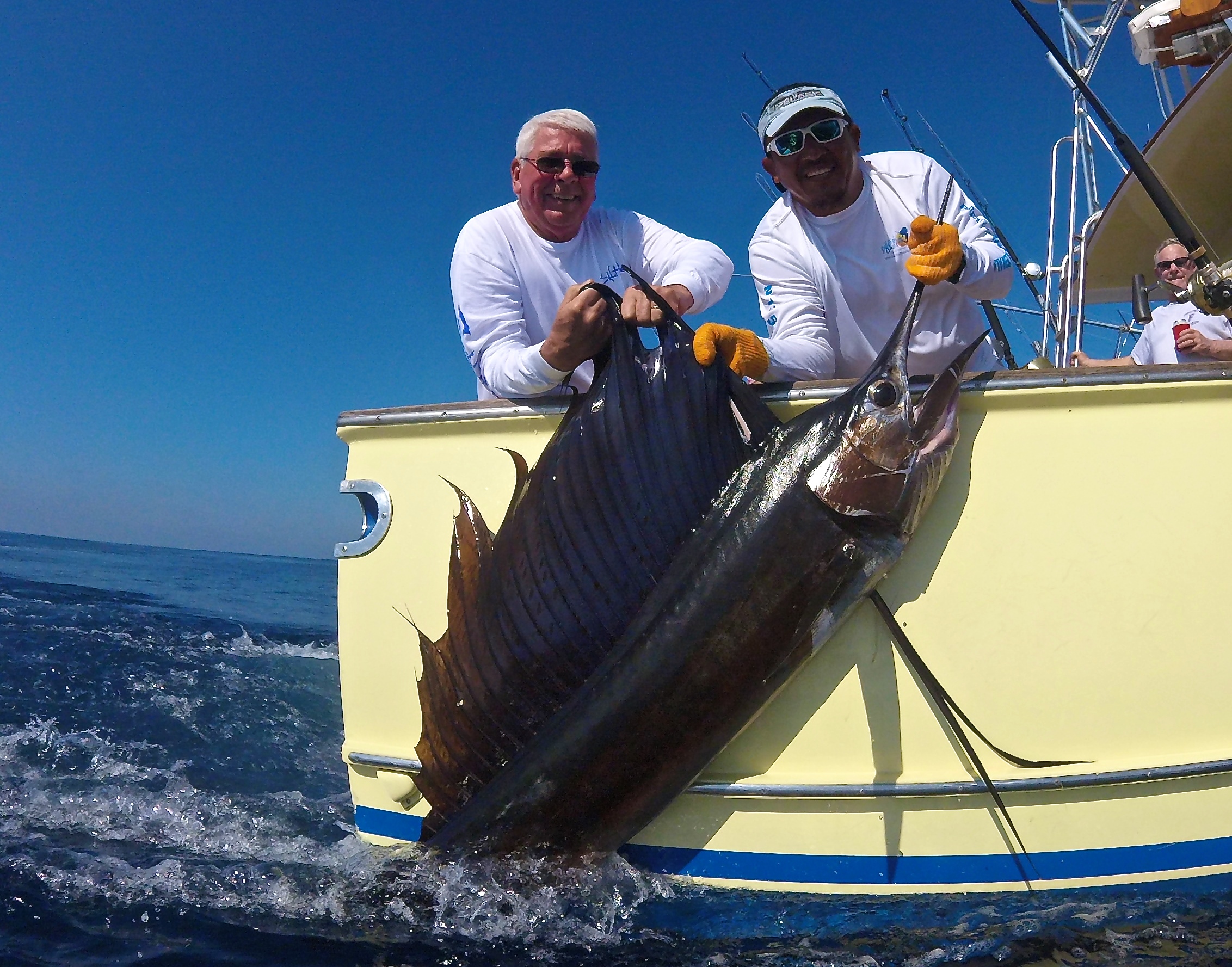 Ron Smith with his boat side before release.

And for the last 45mins of the day we changed top the fly. Rick Douglas a good keen man on the fly rod has traveled the world flyfishing in the worlds hotspots so the guys wanted him to have a crack at a billfish on the long wand. In the dying minutes after raising several fish that didn’t tease all the way in we raised a hot fish that the mates teased in. Rick laid out the perfect cast, and with the boat dead in the water the fish came from deep and nailed the fly with an incredible bite. 1 cast, 1 bite, 1 release for Rick, what a finish for a great 70th birthday celebration for Steve and the crew… 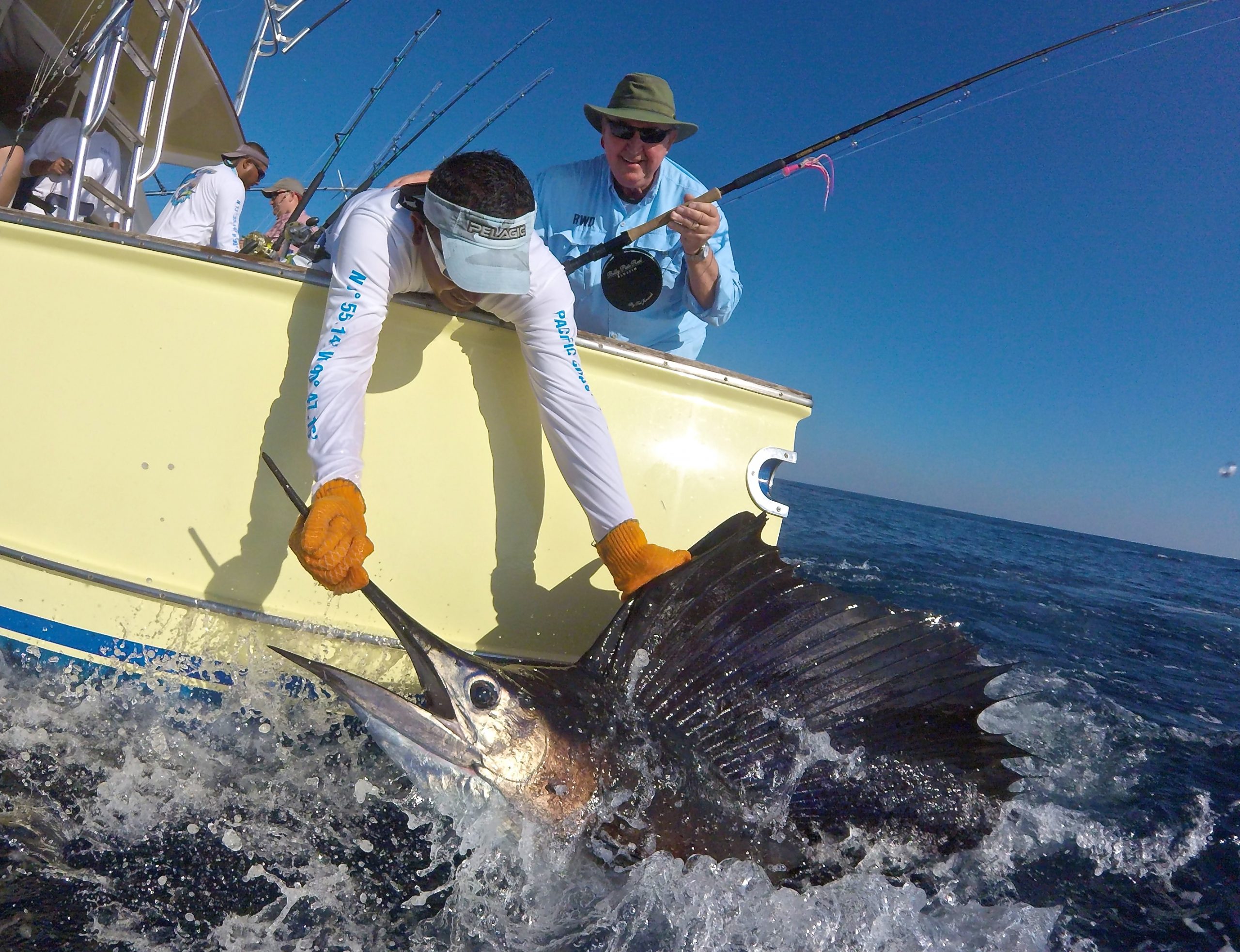 Good consistent fishing for our groups in December. From here on in the pace picks up as we get into January with not many days left available. Right now we do have January 11-12th open. February 28th and March 1st as well as March 28 and 29th. April is starting to fill up though as of now in April: 2nd to the 6th, 16th-19th and the 24th on are available. Book now to avoid disappointment and get into some of this incredible fishing.

**JANUARY 19-20-21 we had a large group trim down so we have 3 boats available over this time frame. These are prime dates into a weekend that have just opened up. Get in touch to secure them as they will not last! 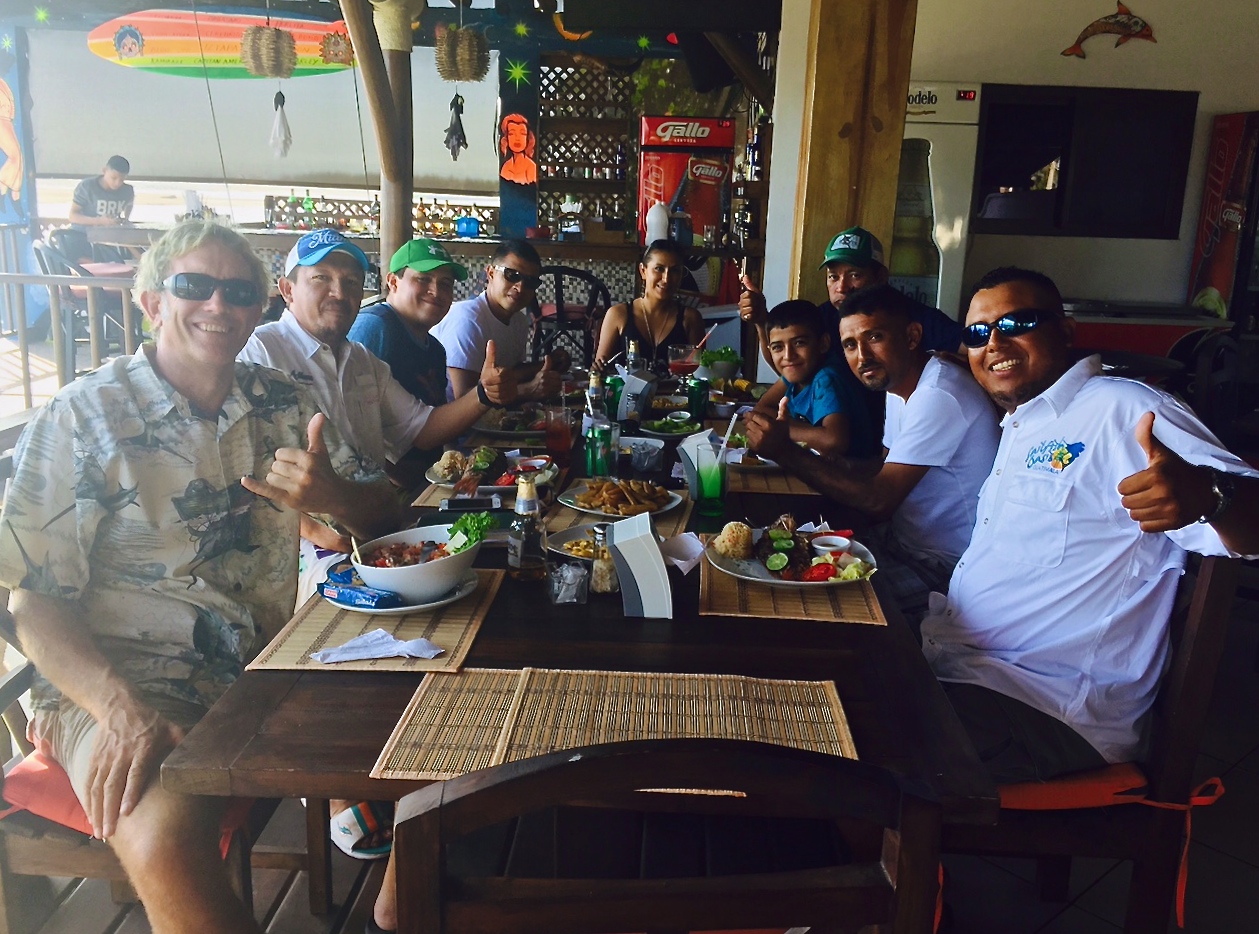 And from me and the crew on the boat and the staff at the lodge Happy Holidays / Merry Christmas and the best New Year to all our friends that have fished with us in the past and we look forward to seeing and fishing with you in 2017….Cheers!