We welcomed in the above family to Guatemala and SAILFISH OASIS LODGE for their first time with a big Thanksgiving dinner on their arrival Thursday evening. From there on in they had 2 days of fishing aboard ALLURE II and a trip to give thanks for! First day with the blue water having pushed in we stopped in close and tried the first drop off at about 10nm. Within the first 20min we’d raised 2 sails and a blue so worked the area hard and ended with a great day, good consistent fishing right through.

Gerald and Trish with a double header

Final tally for the day 23 sailfish in the spread with 16 released from 21 bites, 5 blue marlin raised in the teasers with 2 released from 3 bites and 2 nice mahi mahi in the boat. 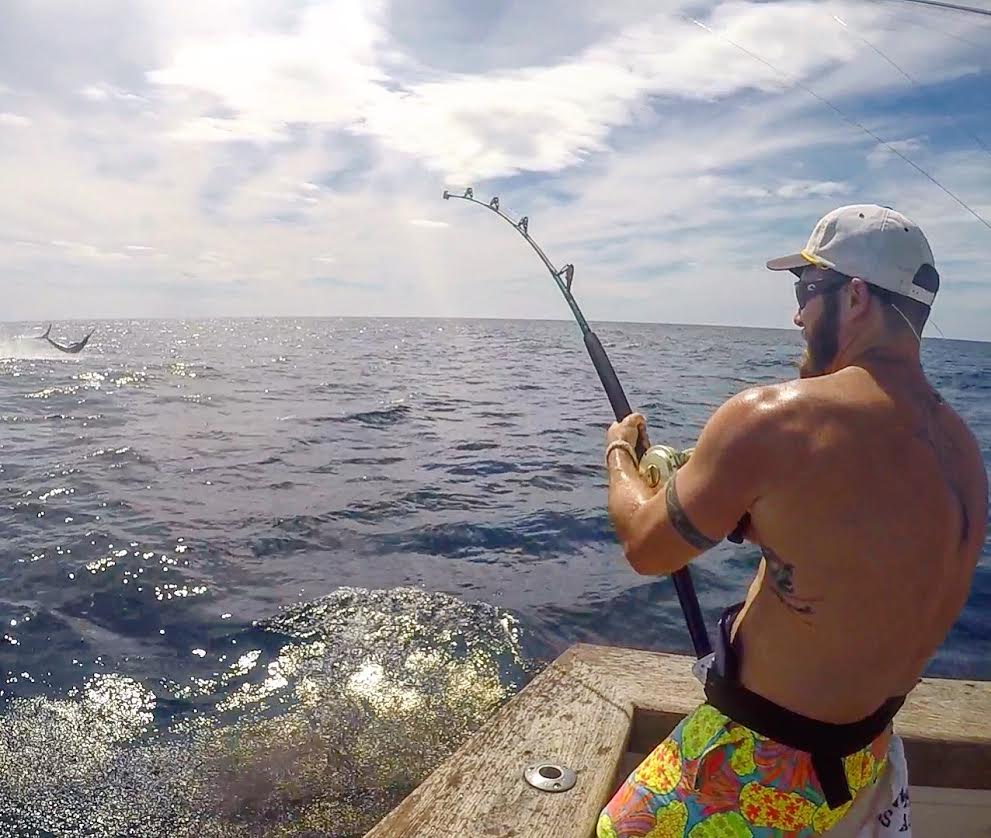 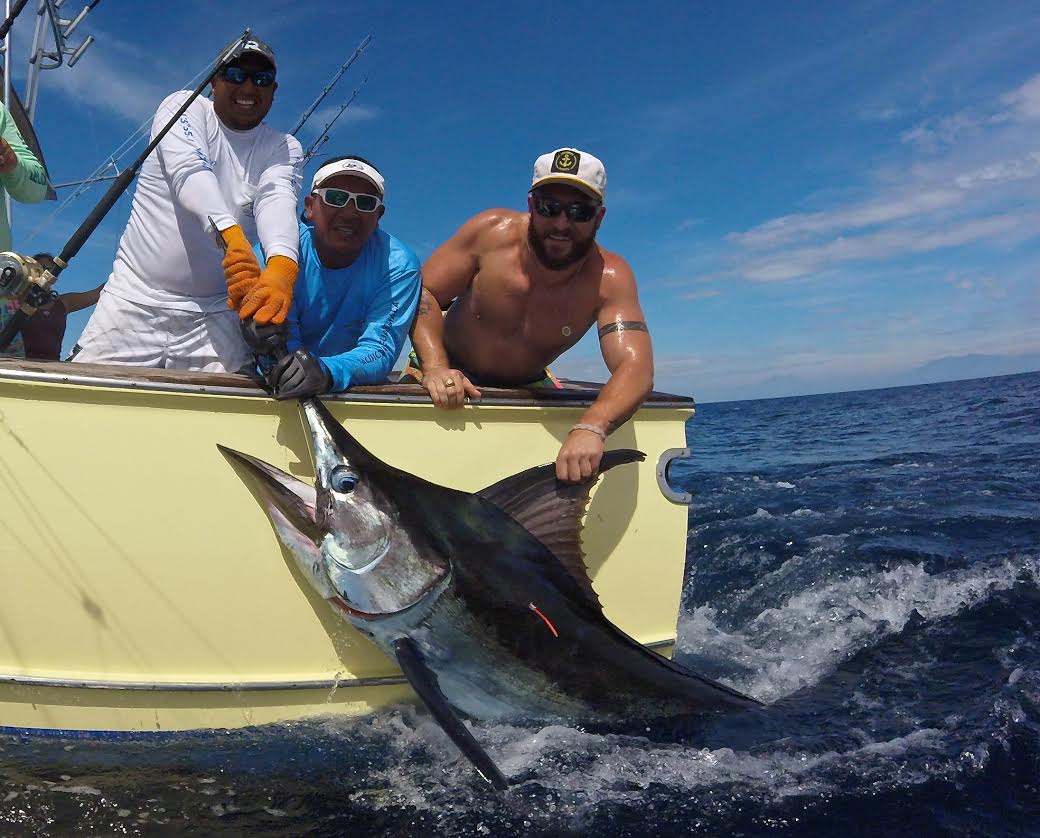 Garrett with his first blue 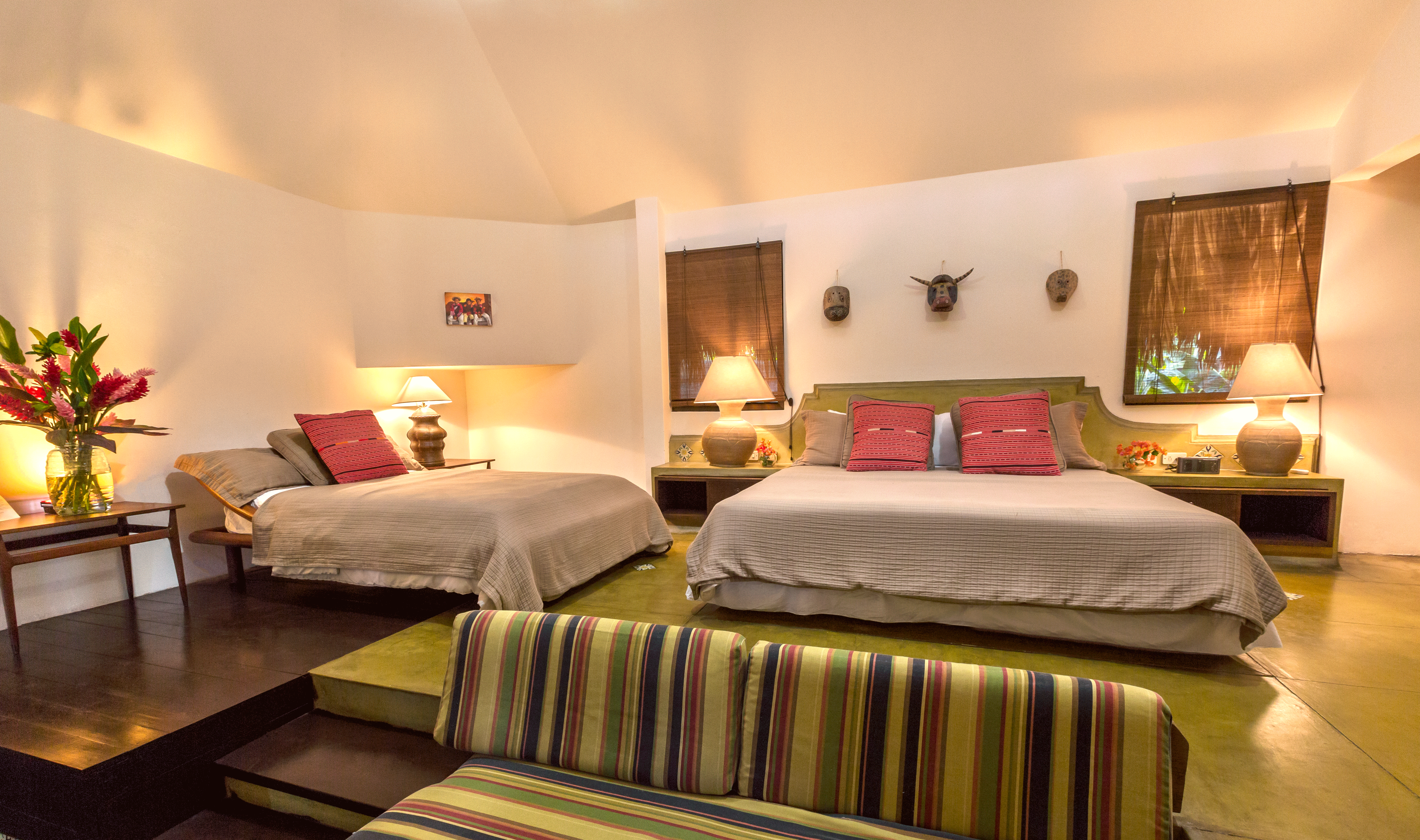 And Whitney putting the heat on hers… 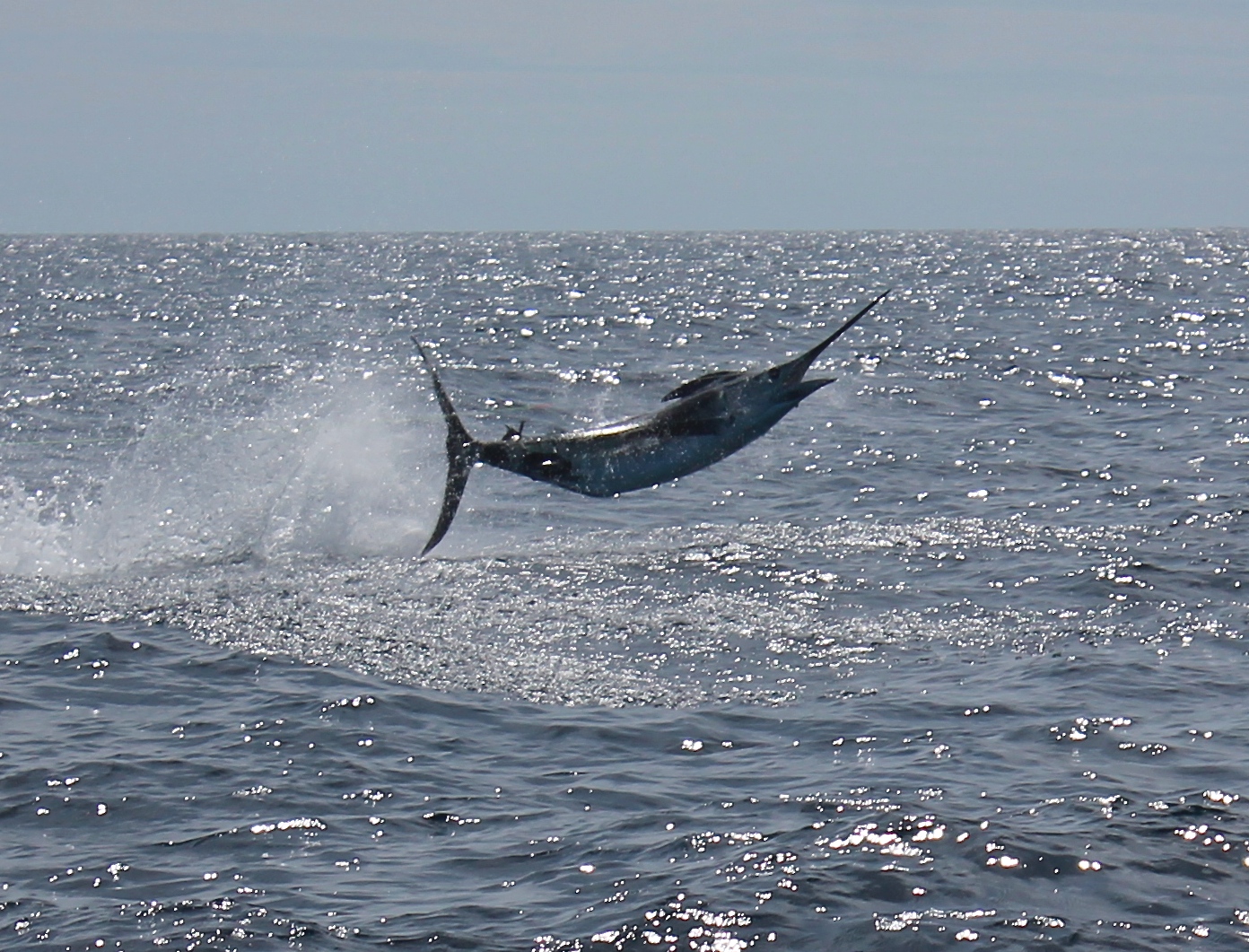 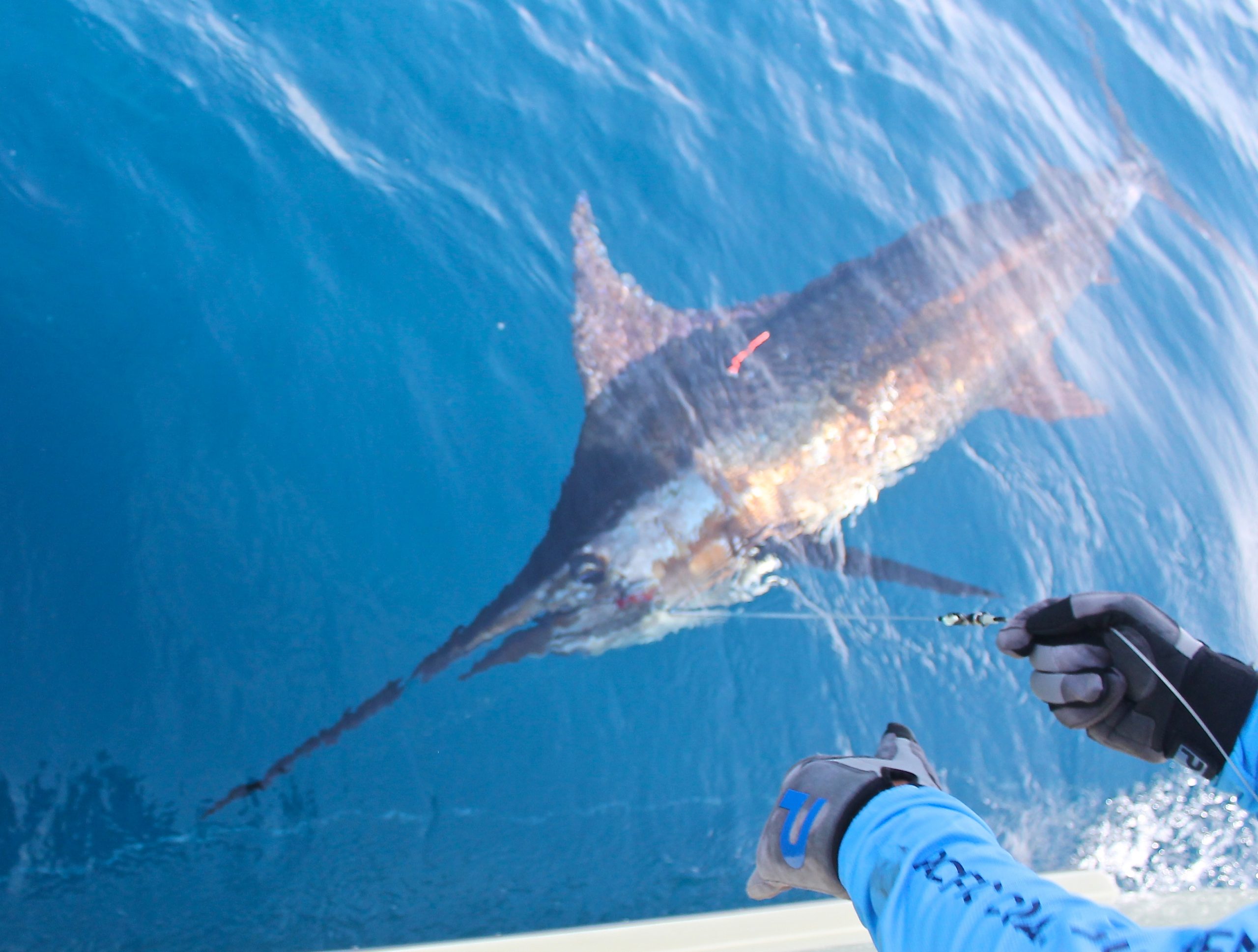 We started the next day with a triple in the spread right on the drop off, 2 sails and a striped marlin in the teasers, we released 1 of the sails and this nice stripey for Trish…

Nice way to start the day!!

Hopes were high for a blue to complete the slam though try as we did, no joy. We did release 11 sails from 17 bites for the day and a 2 day total of 27 sailfish, 2 blue marlin, 1 striped marlin and 2 mahi mahi. What a great family Thanksgiving trip! 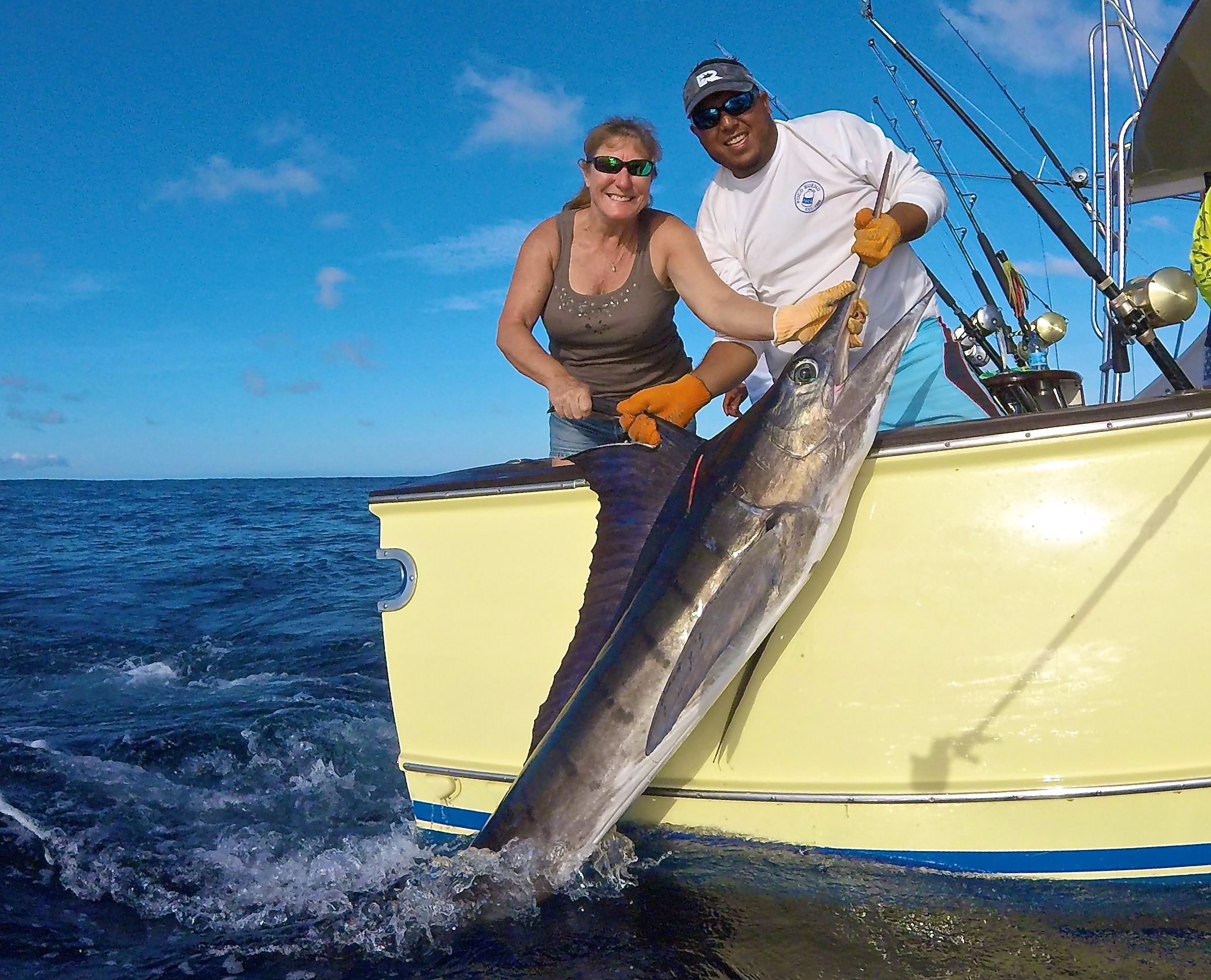 Tommy and Melissa Vinas for their first trip abroad and their first offshore bill fishing trip chose Guatemala, SAILFISH OASIS and ALLURE II and what a first trip it was for them. First day we found some fish at about 35nm in front and ended the day with 10 sailfish released from 16 bites. 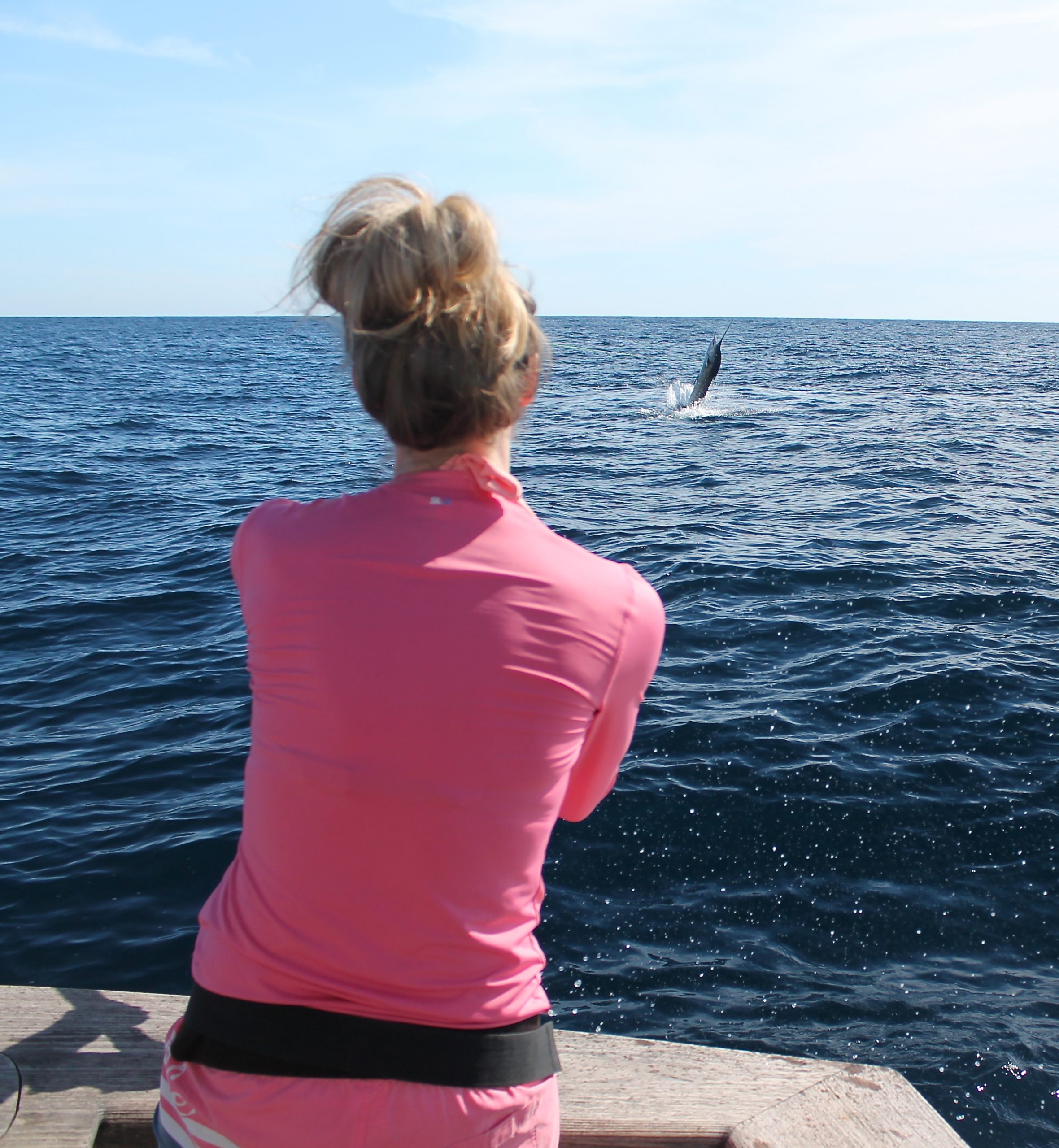 At about midday we got into the mahi’s pretty good boating 5 nice sized fish including this beauty of about 40lb for Melissa…. 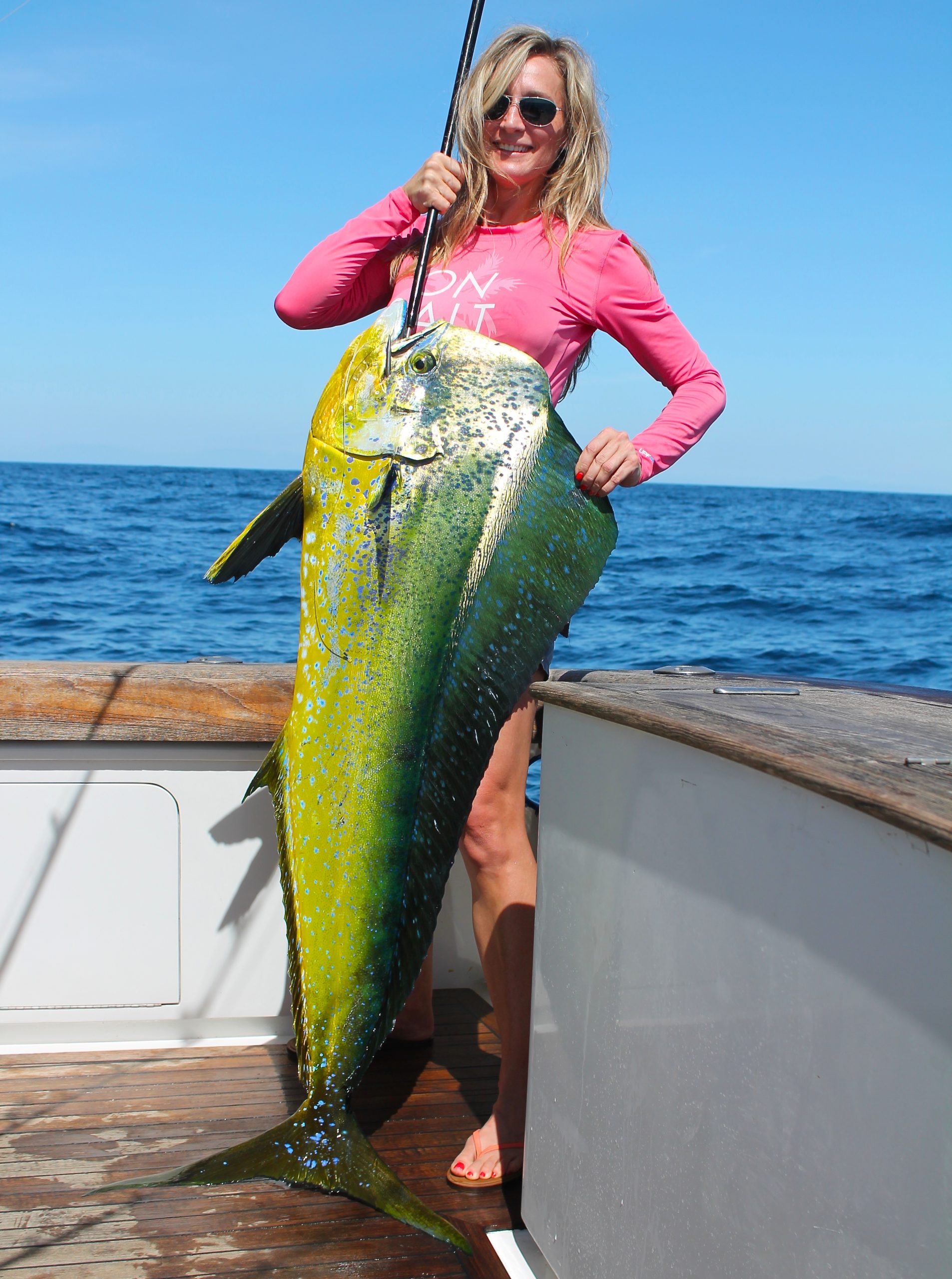 The next day proved a bit tougher, though both Tommy and Melissa were hooking their own fish and did a great job with the few opportunities we had releasing 5 sailfish from 5  bites. 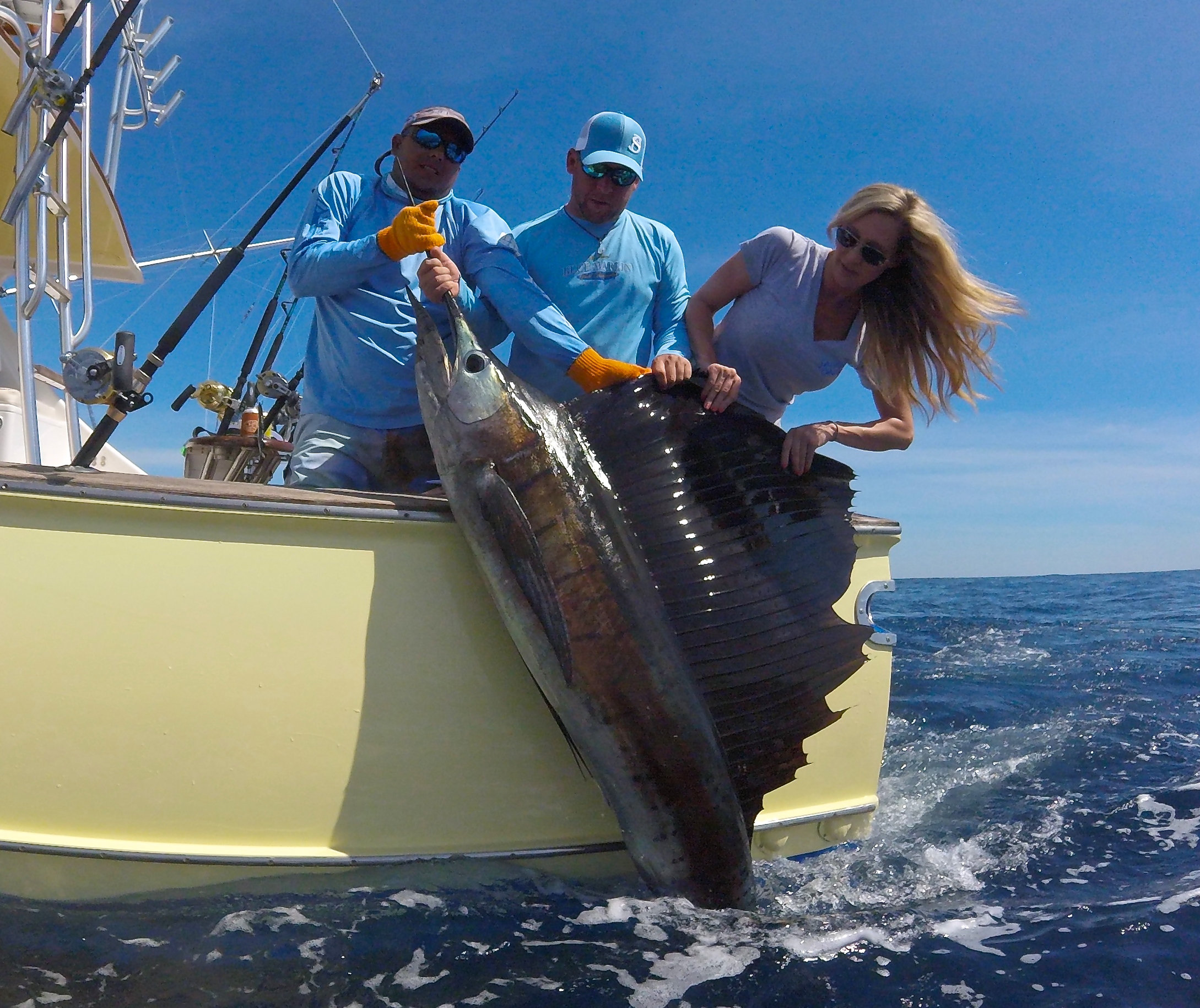 Out off the western corner at about mid afternoon we raised a hot striped marlin on the right teaser and Tommy got the release on the 50lb standup after a tough battle. 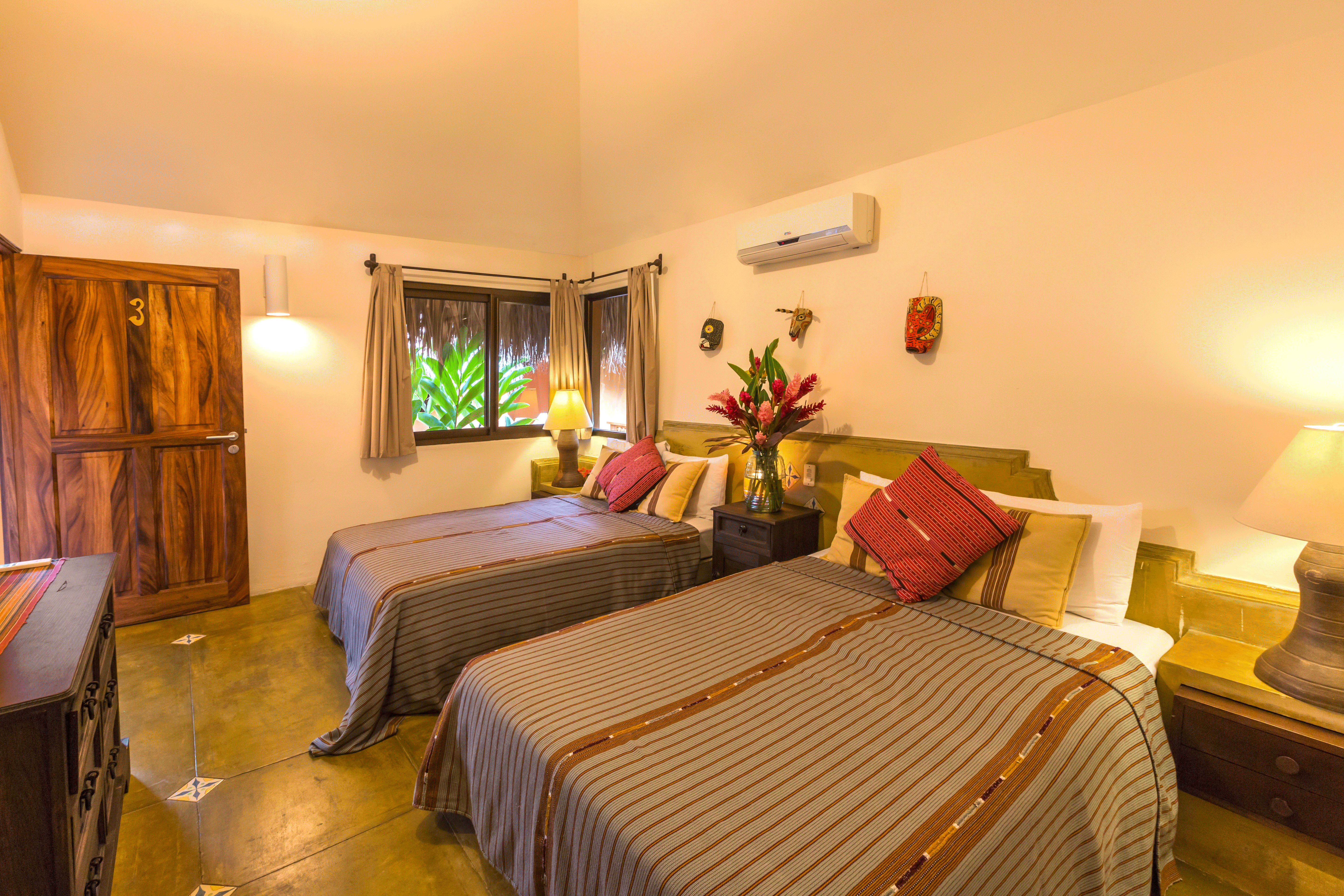 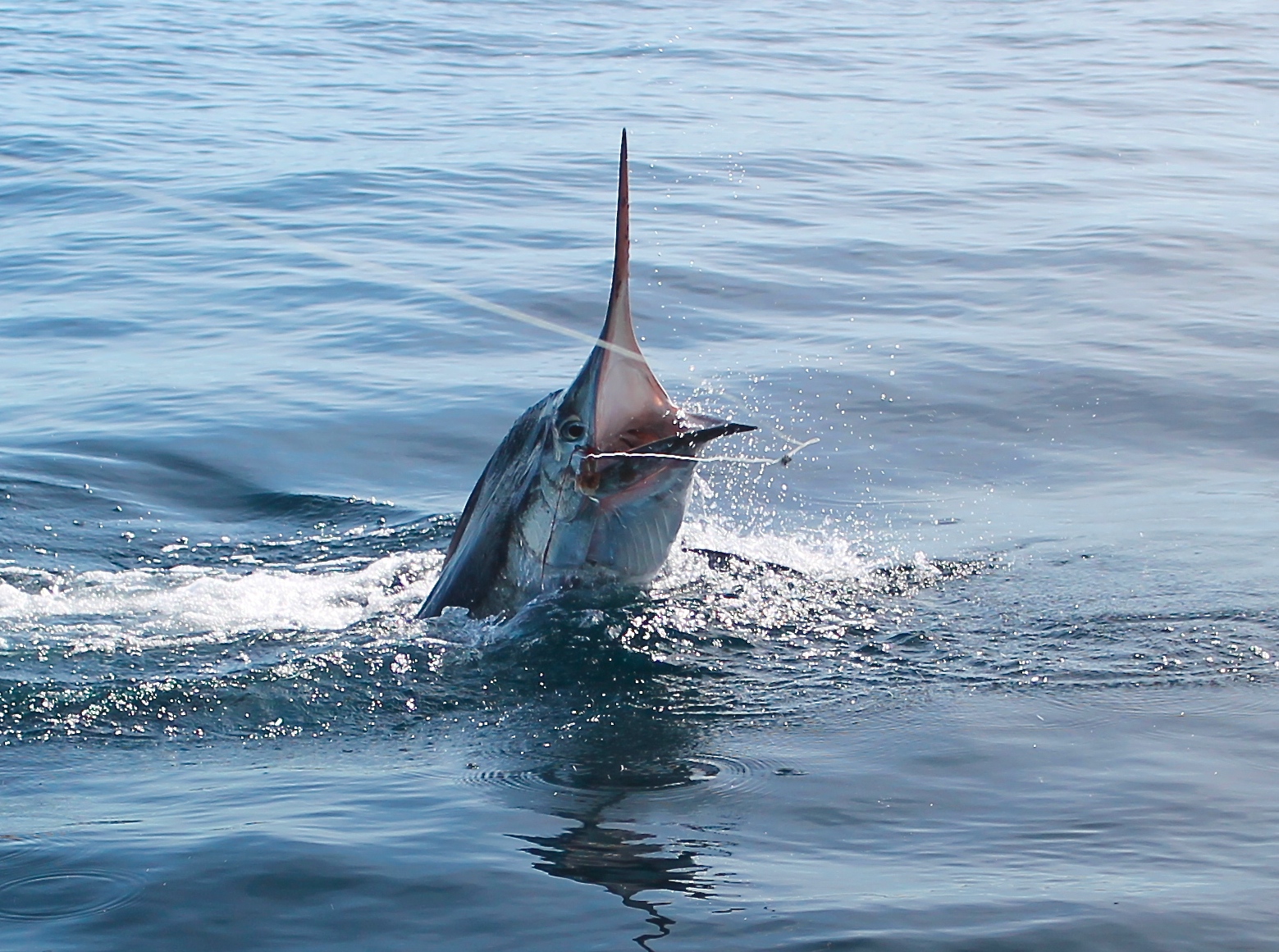 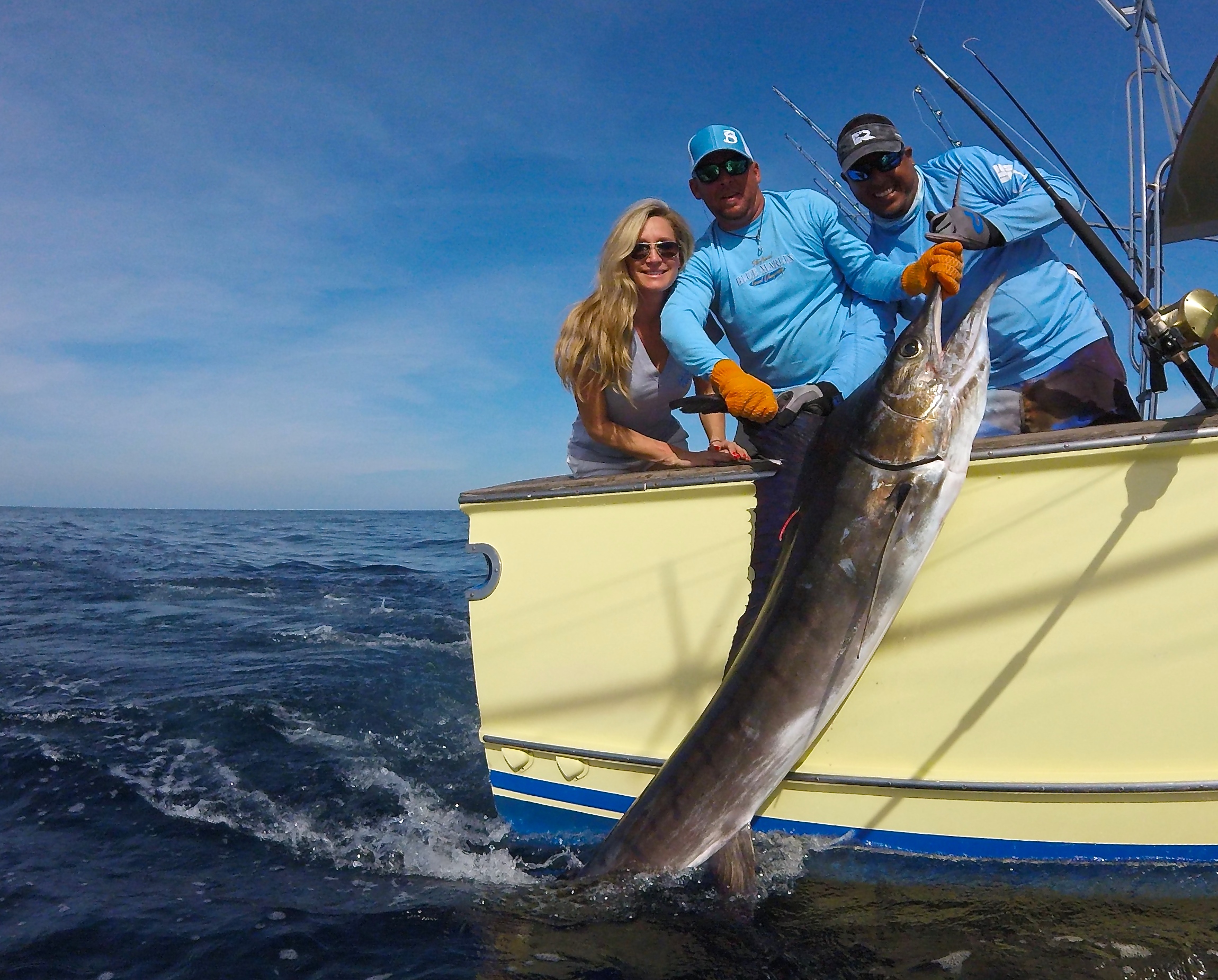 Late in the afternoon we ran in to the western side of the pocket looking for a blue to complete the slam and in the last minutes of the day raised a hot blue marlin on the short teaser. Things got a bit anxious when we missed it the first 2 times though the fish piled on the bait the 3rd time and Melissa got a great release on a tough fish of about 200lb. 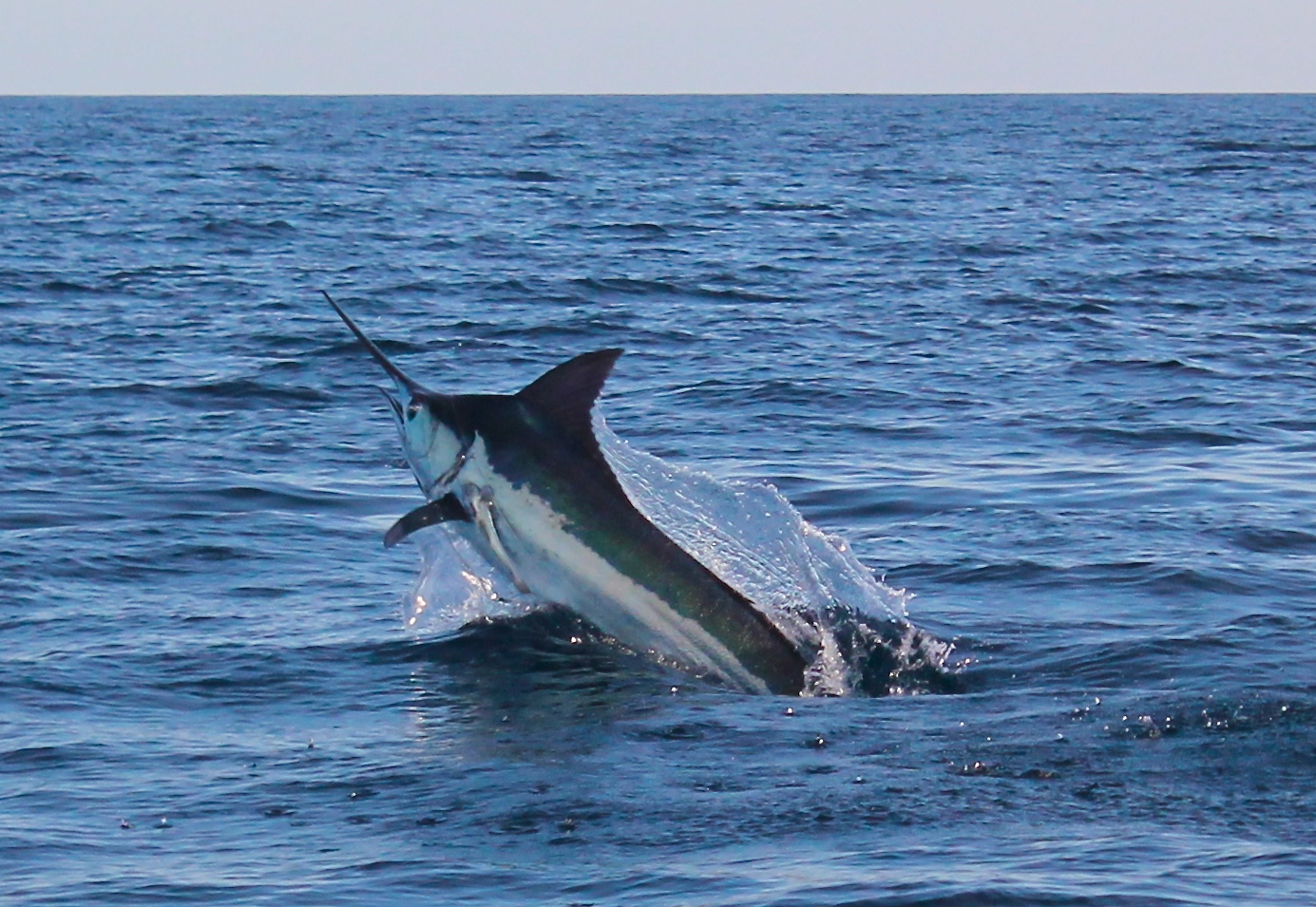 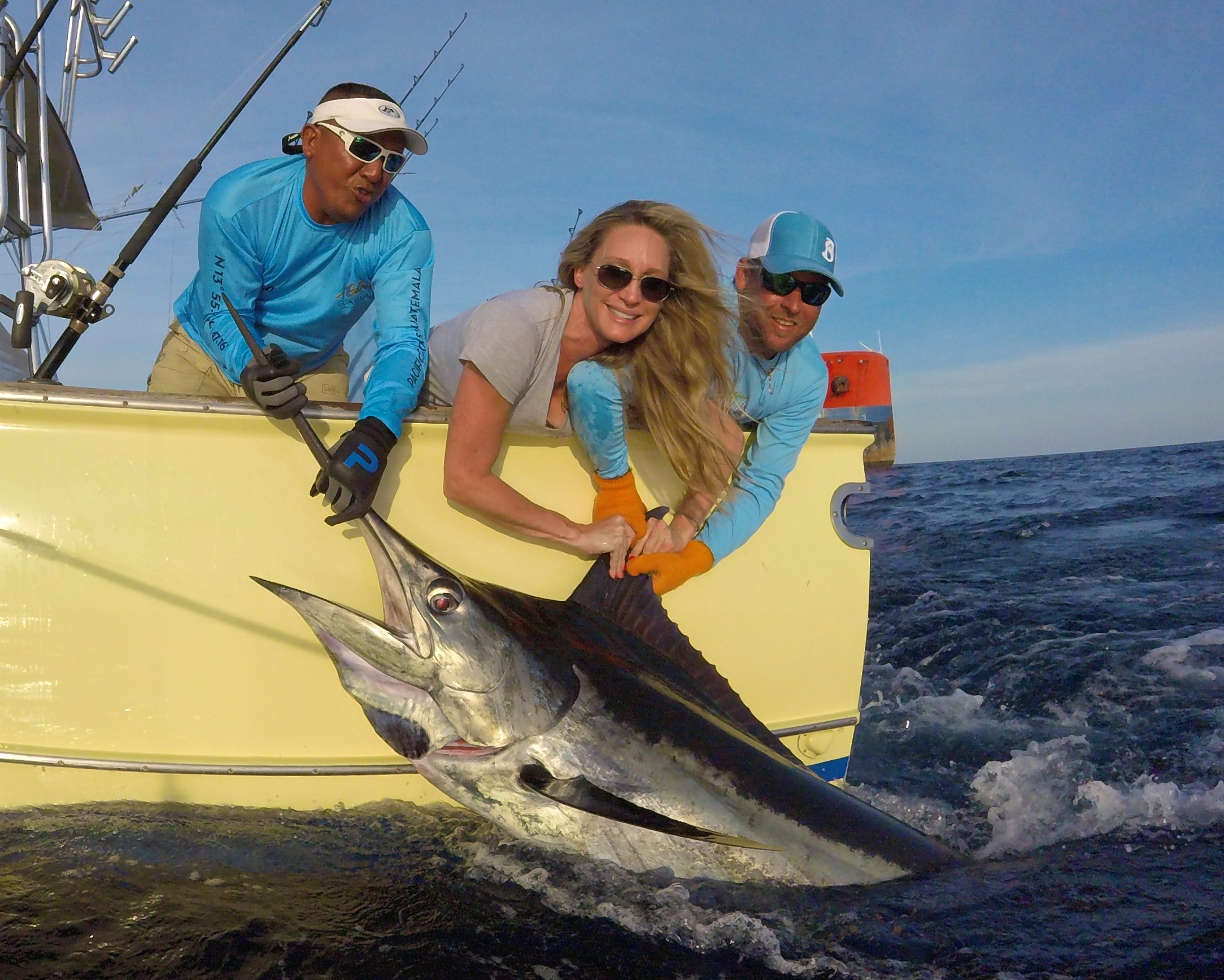 Congrats to them both on some excellent angling and a grand slam on their first offshore bill fishing trip, That’s a hard one to top!

An awesome 2 days of fishing with 15 sailfish released, 1 blue marlin, 1 striped marlin and 5 large mahi mahi in the boat… 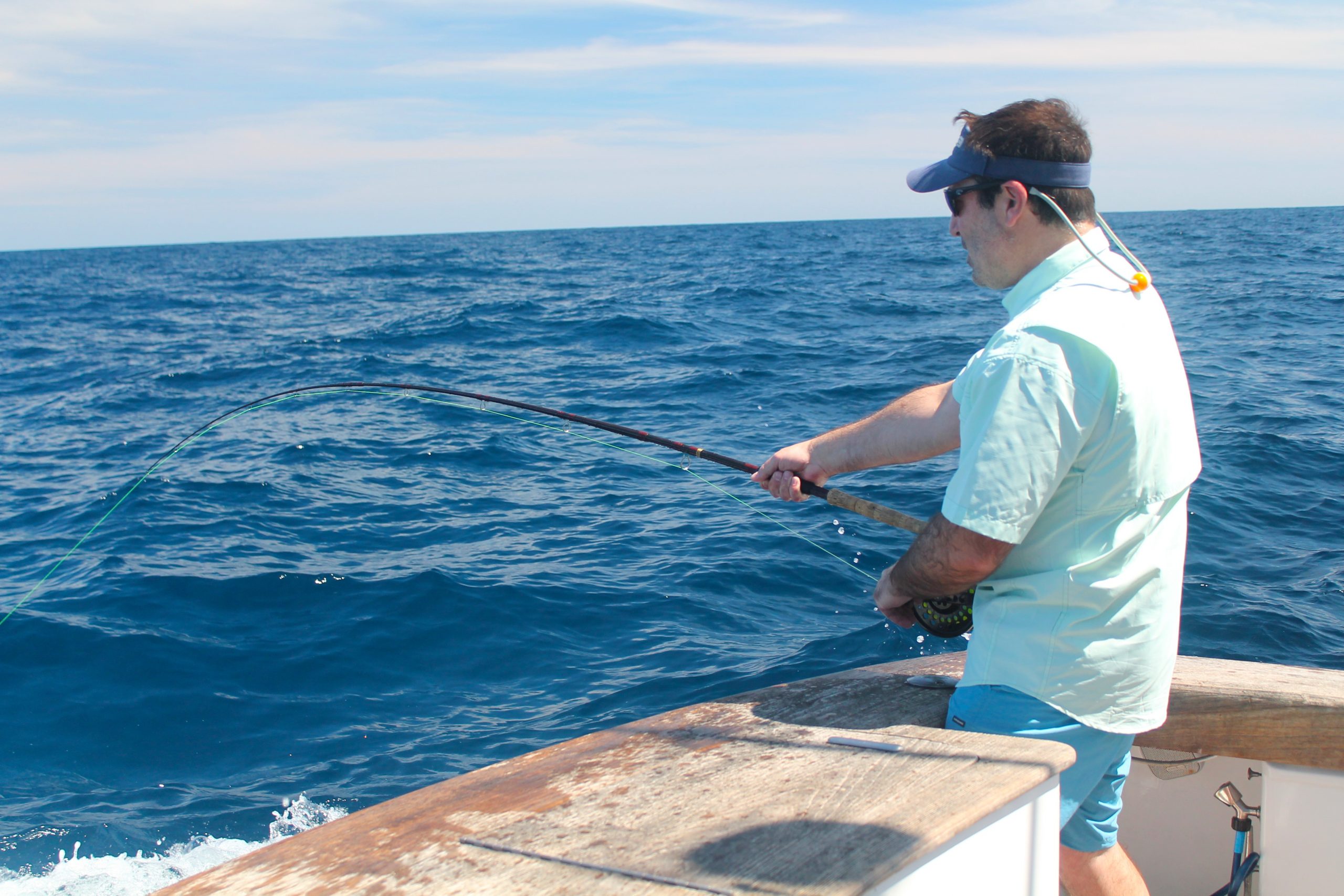 We hosted Brian and Lori Irwin from New Hampshire for a 3 night 2 day flyfishing trip and they finished their stay with a couple of nights in Antigua. Over 2 days we raised 29 sailfish into the spread and got 18 of them to bite the fly of which 7 were released. 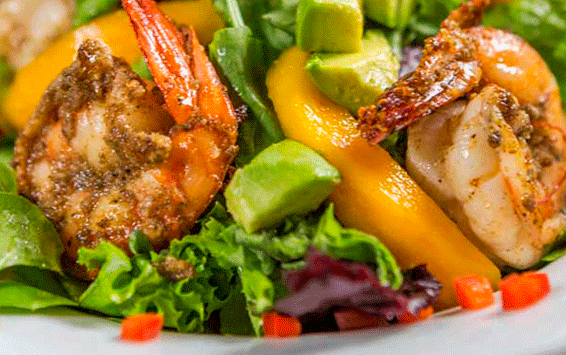 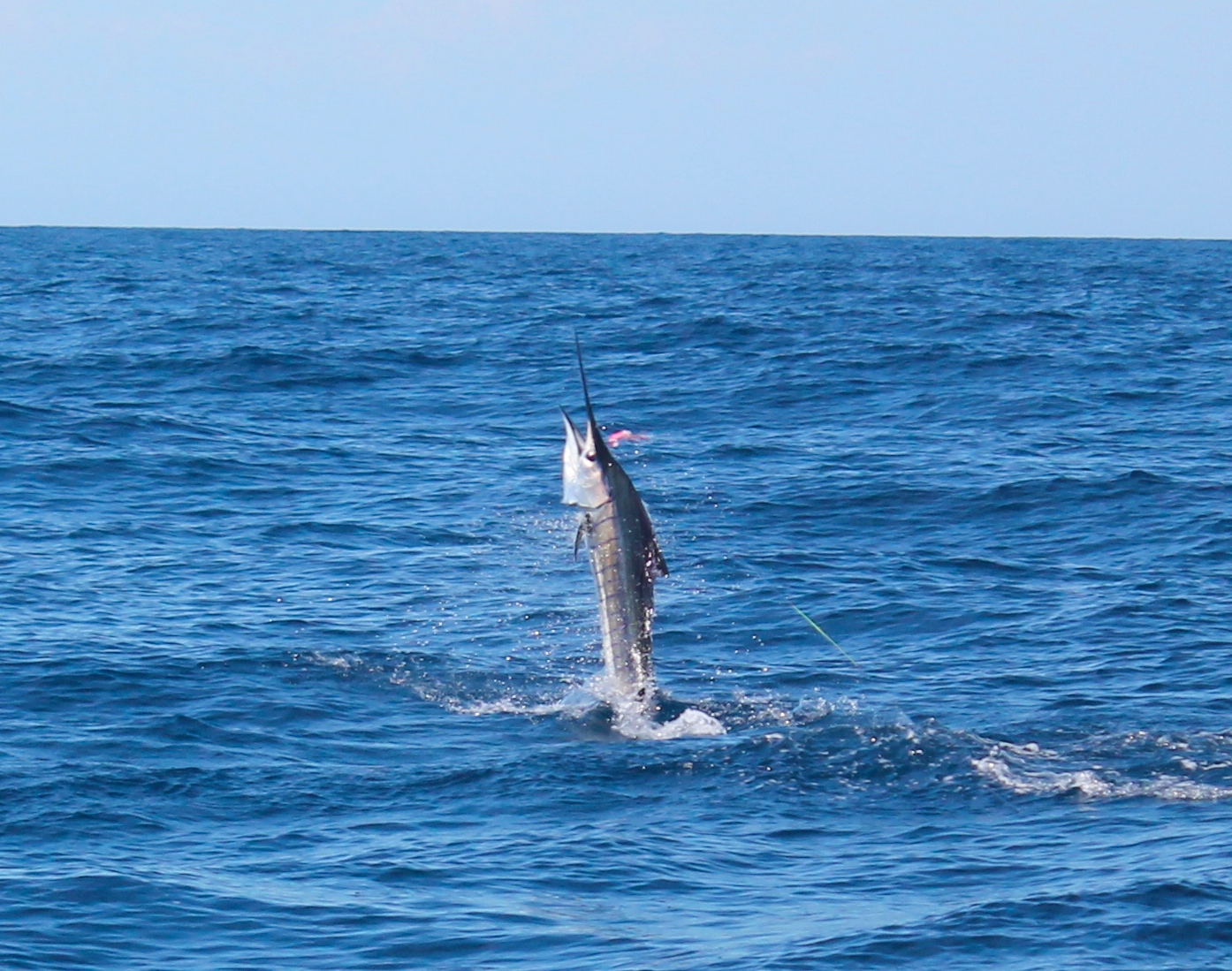 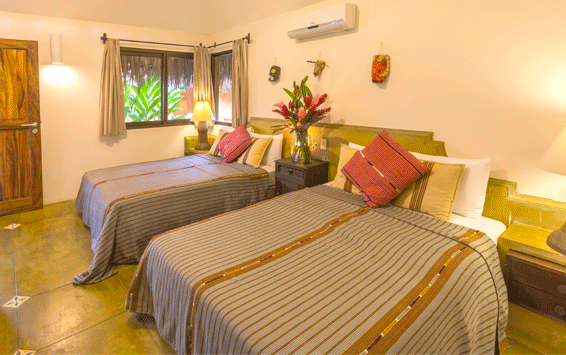 And Brian with his…..

On our last day out we raised a hot 200lb blue marlin into the spread and teased to casting distance, Brian made the cast though fish did not switch. We got the mackerel back there and the fish came up head and shoulders on the bait though did not eat…..no luck this time. Brian is a freelance journalist, Brian Irwin Media, the link to his blog: http://brianirwinmedia.com/?p=2175

The fishing has been excellent out there, we have very few openings though there are a couple of opportunities to fish ALLURE II in early January and again in April and May. We still have December 30-31 Jan 1-2 open at the lodge with several great boats keen to get out there. If you want to make New Year 2017 one with a difference and one to remember get in touch with us. The lodge sleeps 20, the larger the group the bigger party and the fishing is always hot as is the weather!! Looking closer we still have prime dates available before Christmas, I’m picking the December bite to go off, get down here to get in on it…..we still have the 15% offer on through December.