Not too many charters going on though with the good fishing we have been having for the few trips out I’m confident we’ll be fishing more and more in June through August, September in the years to come.

We had a one day charter Saturday 6th August with local panza verde Jose Toruno organizing a trip for his brother-in-law Richard Tapp down for a few days in Guatemala from Montreal, Quebec, Canada. They were joined by fellow Toruno’s Jorge and Estuardo and good friends Juan Carlos Benavente and Cyril Mischler for a day of fun and fishing aboard ALLURE. The blue water was a bit further out today than the previous weekend at about 25NM off the breakwall, we found a couple of nice current lines holding small logs and trash in the blue water though surprisingly no mahi’s. We did raise a couple of sailfish on the teasers though did not get a bite out of either of them before running a little to the west to a small group of spinner dolphin. Not too much going on with this group, we did see a couple of tunas though could not get a bite out of them after working the area pretty hard. From here we pushed off-shore a little and finally got into some billfish action with Cyril Mischler releasing the first sail of the day….. 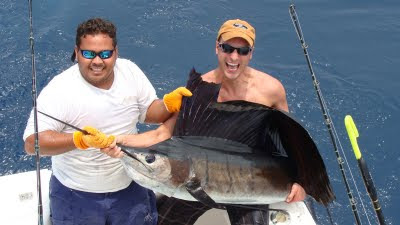 Not long after Jose Toruno got into another nice sailfish which we tested out the new underwater camera on, a nice fish too of 90+lb’s, in the photo you can see another sailfish free swimming in the background, try as we might we could not get the other fish to take a bait. 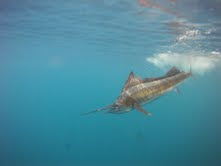 Next up was Richard Tapp, he has had plenty of experience catching large salmon up in Qubec though had never caught a billfish before. We raised a fish on the swimming ballyhoo in the long rigger position, the fish disappeared before coming up and disappearing again, after a long time on the turn it came up and finally ate the bait, after a good drop-back Richard came tight on a small stripe marlin jumping like crazy. It was a tough fish on the 20lb tackle and gave Richard a good work out, a nice one for his first billfish!!

Julio giving a bit of advice. 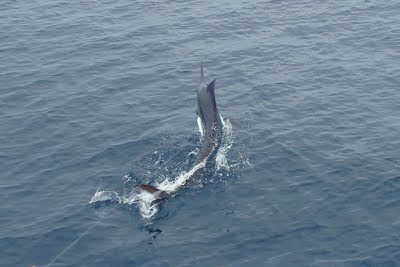 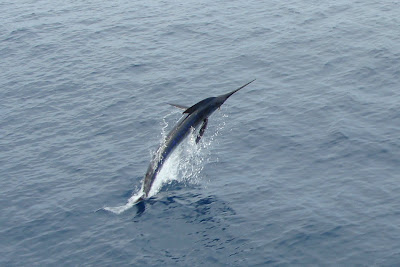 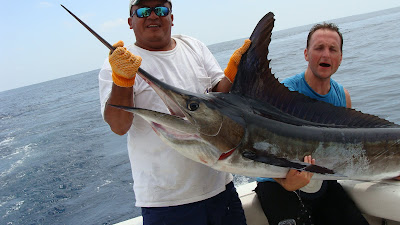 And with the results……Richard and the stripey pushing the 100lb mark. Nice fish and nice going Rich!!

From here on in Juan Carlos released a sail, another big fish….. 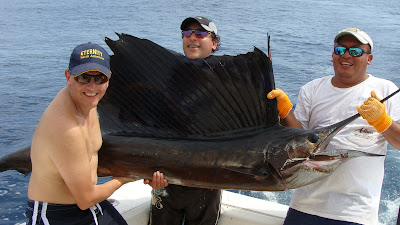 Estuardo and Juan Carlos with another nice sized sail

And Jorge Toruno released the last sail of the day to end with 4 sail releases from 5 bites, 8 sails up in the spread today and the stripe marlin. Add a few cocktails in the mix and the guys had a great day in beautiful conditions off-shore Guatemala.

July 29 and 30 we welcomed Chief Tauzin back down to the Sailfish Oasis Lodge this time with Guatemala first timers Dina Demboski, Kate Heiken, Elissa Ator, JP Michel and Charlie Hansen for 2 days of fishing aboard ALLURE and 3 nights down at the Oasis. With the current from the previous week pushing from the east we decided to head to the eastern side of the pocket, the good news was the blue water had pushed in to about 14NM and we started fishing at the color change. It wasn’t too long before we found an area holding fish and Dina getting the skunk off the boat with this nice sail. 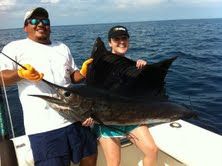 The sail bite was not red-hot though definitely steady with a bite every half hour or so, we stayed in the area till we got a call from a boat a few miles off-shore of us working a group of spinner dolphin loaded with yellow-fin tunas. A short troll off-shore and we were into a big group of spinners and a triple hook-up of yellow-fins on the first pass. It was non-stop and we boated 13 before leaving them for the other boats and back to sails. 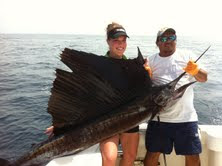 Kate Heiken with her first sailfish. 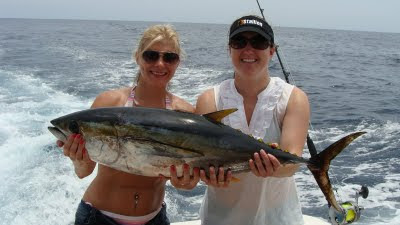 Elissa and Dina with a typical sized tuna

We ended the day with 5 sails from 6 bites released and 7 raised with 13 yellow-fin tunas and one mahi of about 15lb’s for Dina. A great day and night back at the lodge with plenty of variations of tuna, sashimi, rolled in sesame seed and seared…..good stuff and plenty to take back home on ice in the soft bags as well.

Our second day out we one again headed east, a bit slower today though still a great day with the highlight being JP Michel cathing his biggest blue marlin to date, a nice long fat fish all the way to the tail pushing the 400lb mark, way to go JP!! 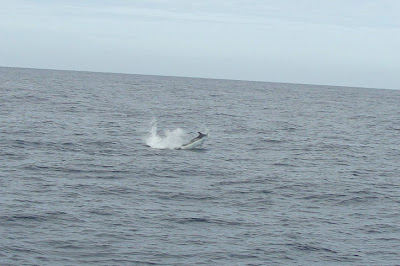 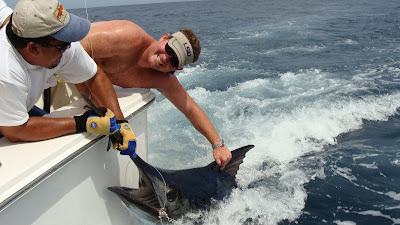 On top of the blue the crew released 3 sails from 5 bites and boated a small mahi. A great 2 days of fishing and an equally great time all round for the party crew with Dina saying it was the best experience of her life….. 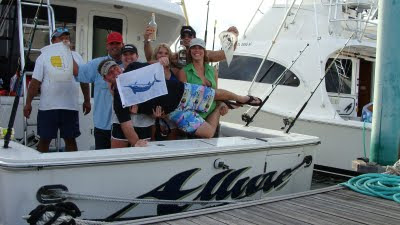 Dina, Elissa and Kate hold JP with Chief and Charlie in the back after a large day on the water.

Saturday July 23 we took out Antigua friends Cyril Mischler (France) and Javier Burga (Peru) with ALUVER associates Thomas Nielson (Denmark), Enrique Bocaletti and Guillermo Bardales from Guatemala City. Tropical storm Dora had just passed a couple of hundred miles off the coast a couple of days previous before being up-graded to a hurricane and it seemed to have stirred up the water with a clean green being the best water we found. Still we made a great day of it getting into a small group of spinners holding some good sized tunas in the 30lb-40lb range so plenty of tuna to take home, as well as a nice 25lb mahi for ceviche Peruvian style from Javier. Good stuff all round… 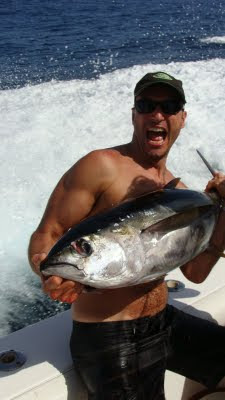 Cyril with a sashimi… 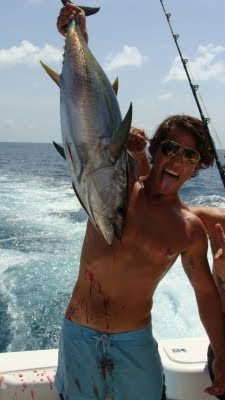 Thomas with another one…. 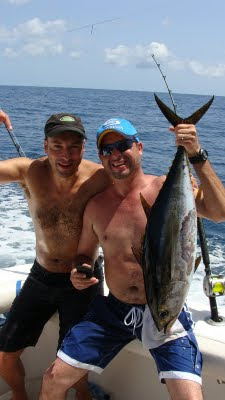 A good haul and another great day on the water in great conditions. We seem to be having a typical rainy season here after last years El Nino deluge with beautiful days and the rain coming in the evenings cooling things down. Perfect conditions off-shore and good fishing to boot. We are starting to take bookings for the winter months…October through next May right now with steady inquiries so don’t miss out on the prime dates, get in touch before it’s too late with us here to secure the time of your life….