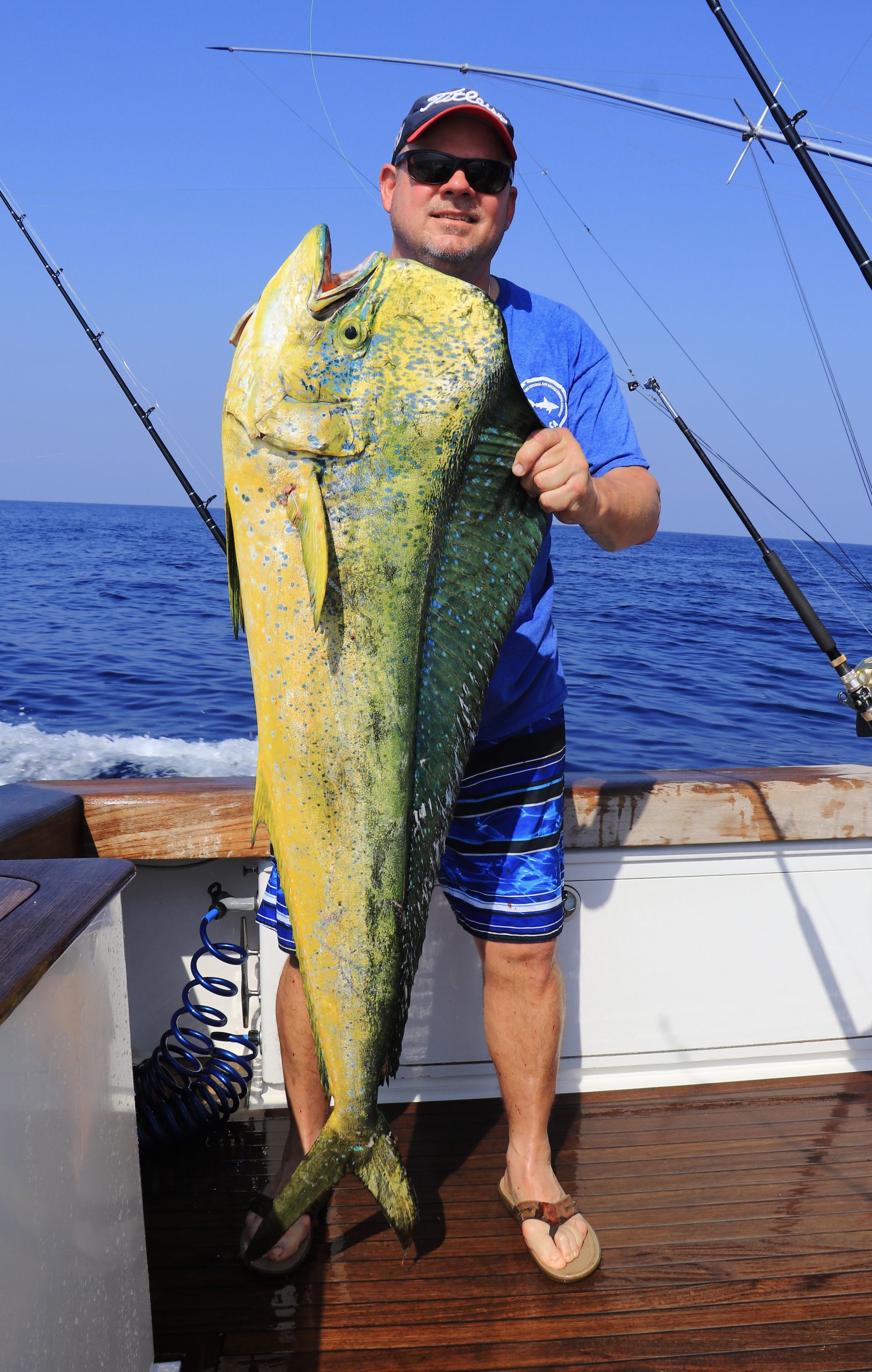 Ann’s first ever sailfish, one of a double header

March 16-17. John has fished Guatemala since 1994, that’s some history and it was awesome to fish with him. In 2 days John and Ann raised 63 sailfish getting 41 to bite. Some tough to convert bites, with a lot of bait out there the sails were more in predatory instinct than eating mode…. 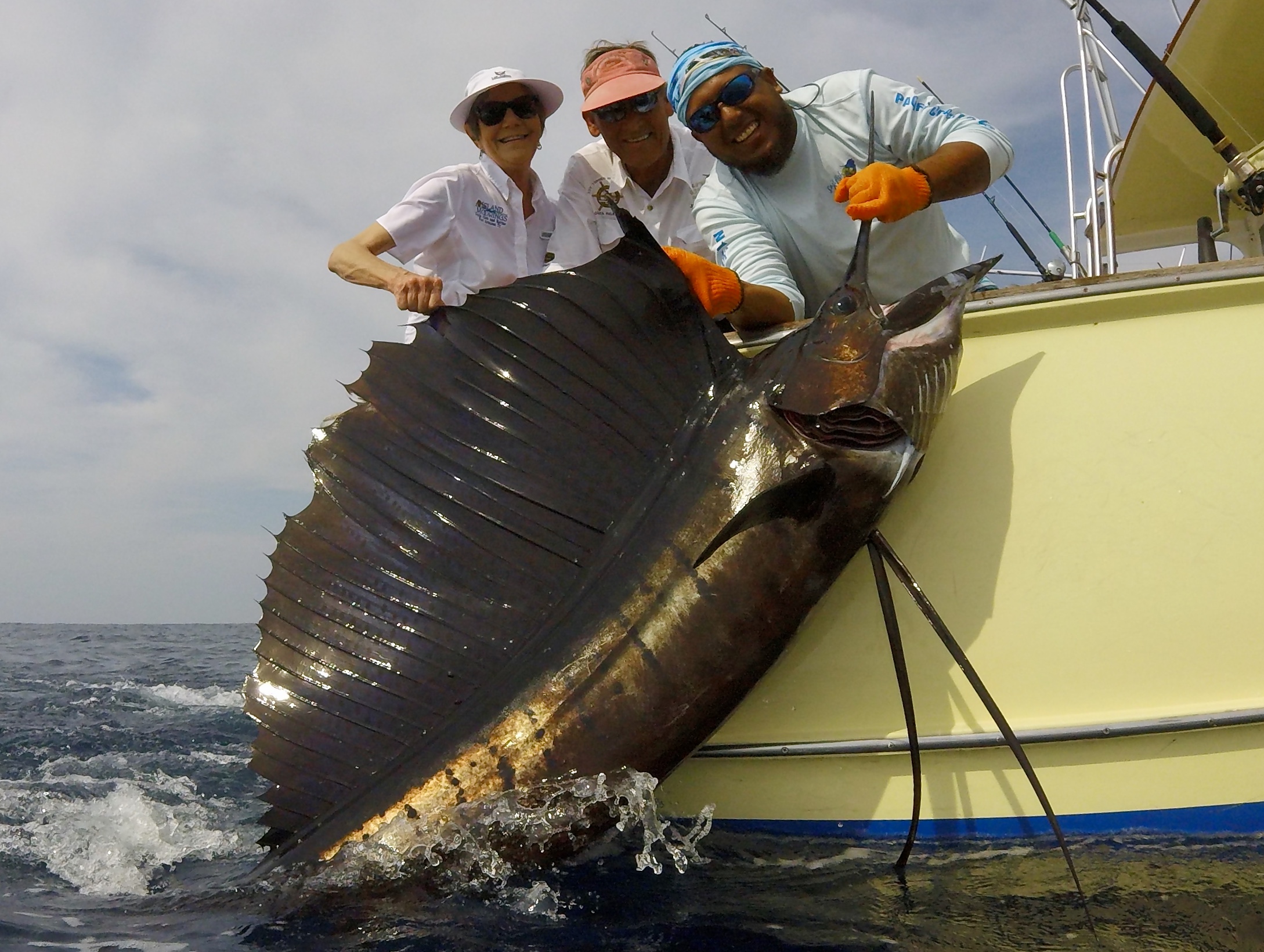 A couple of big mahi’s as well and a great time had by all. 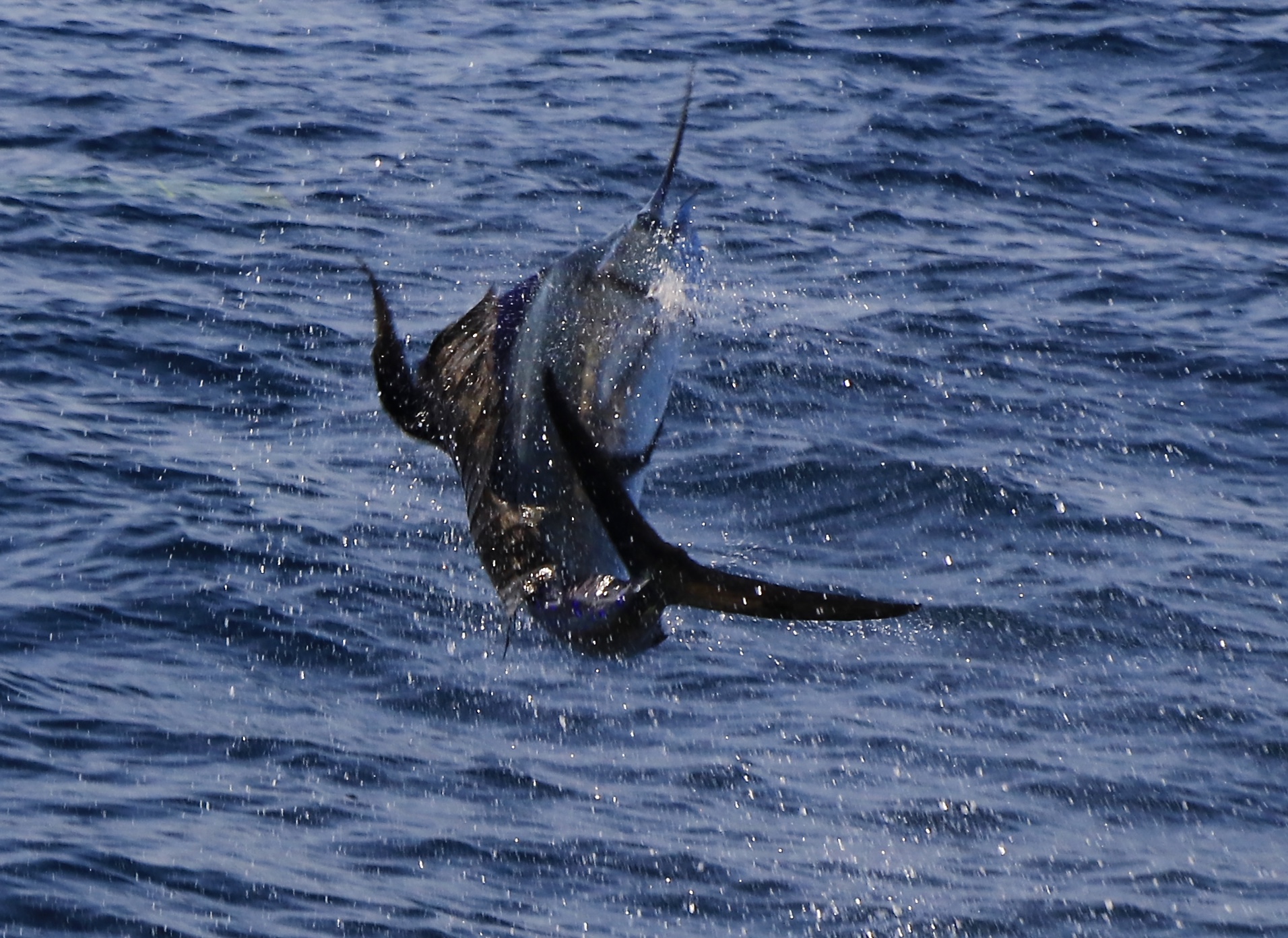 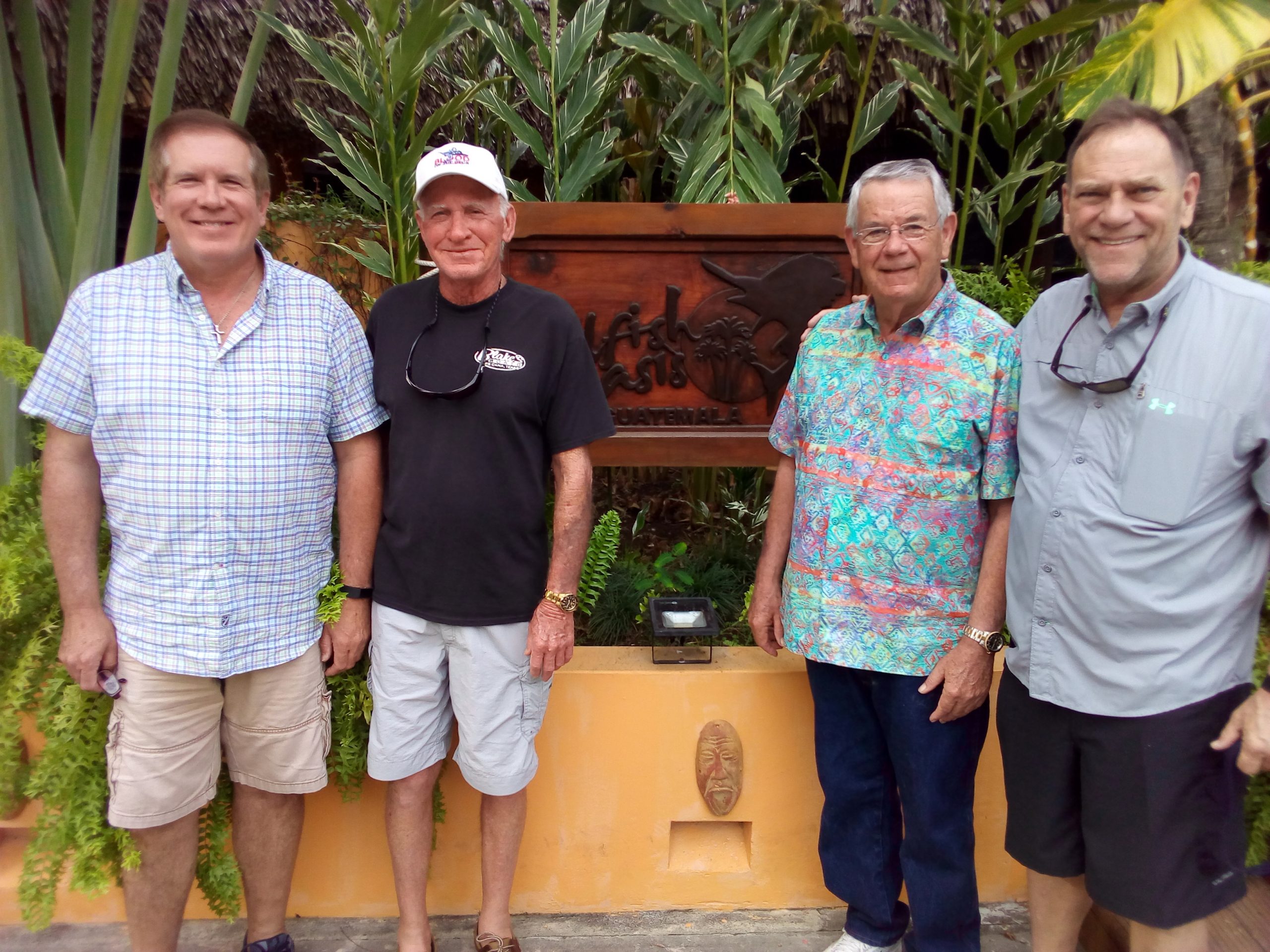 March 14-16 fishing aboard Sirena the first day and Intensity for the next 2 this crew had a blast with 24 sailfish released and several nice mahi’s in the bin. 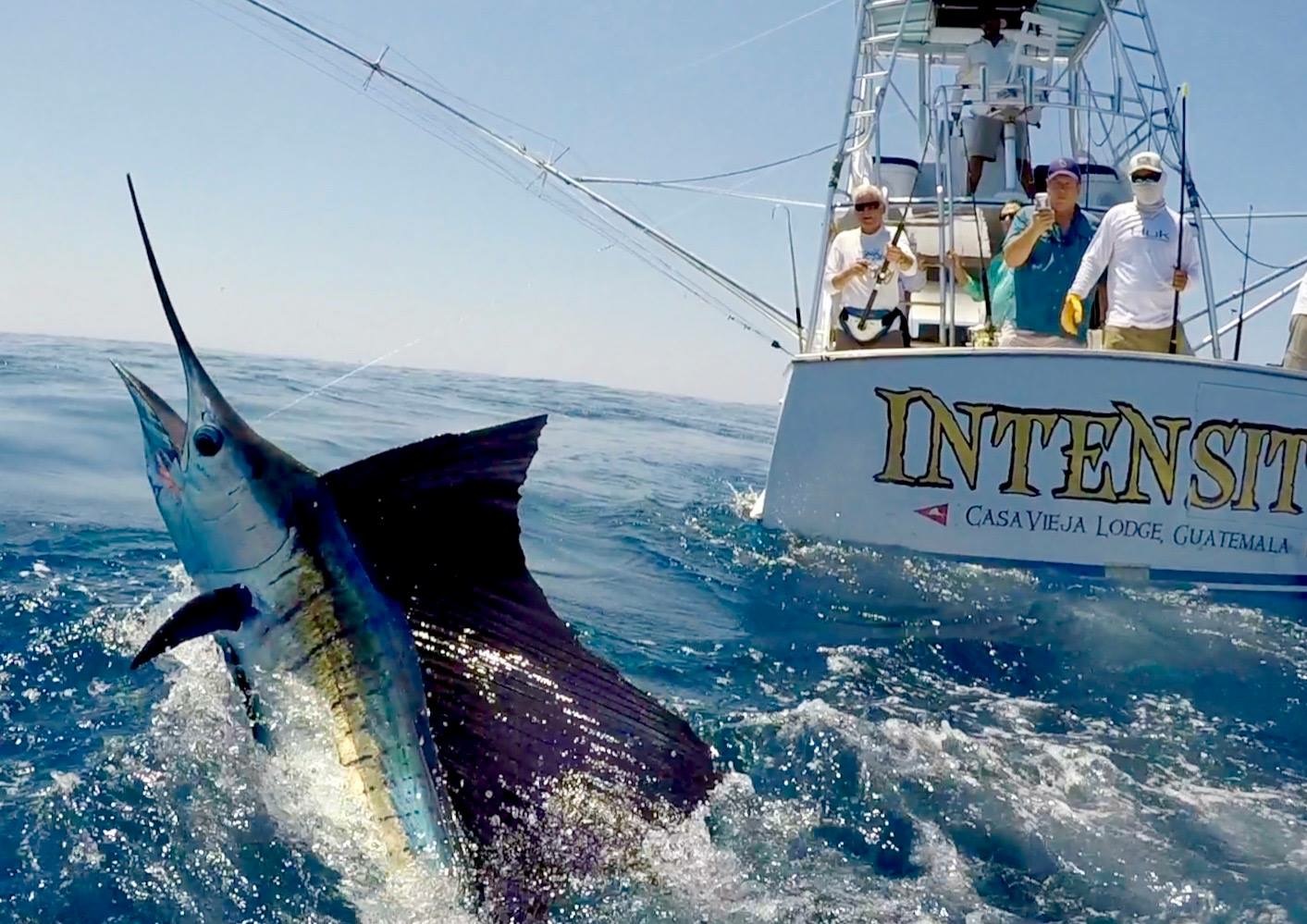 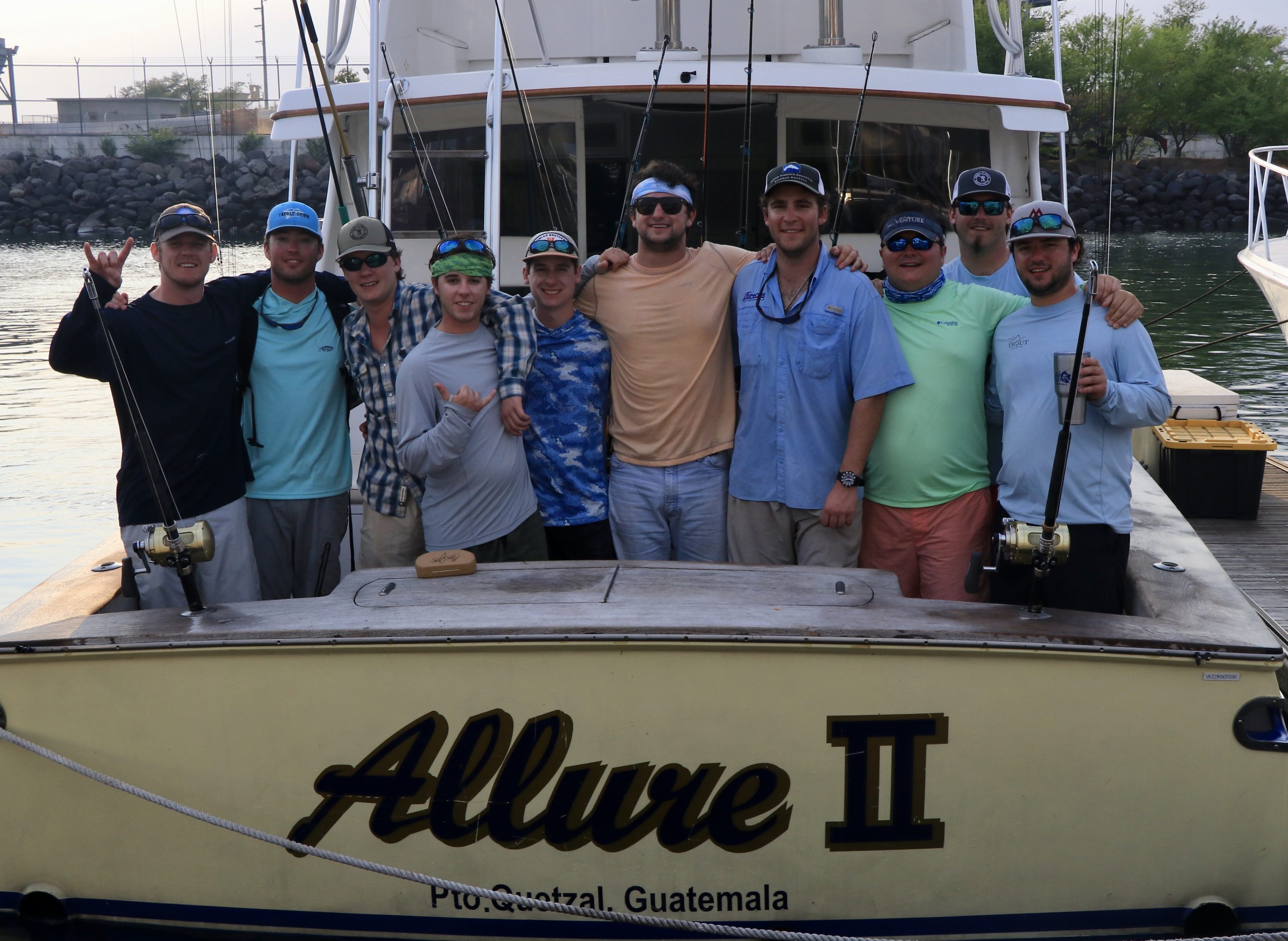 March 13-15. Cool to fish with the next generation coming through. Aboard Allure II and Makina, mixing it up between conventional tackle and the fly this crew raised 93 sailfish and released 53 as well as plenty of large mahi’s and 5 yellowfin tunas. 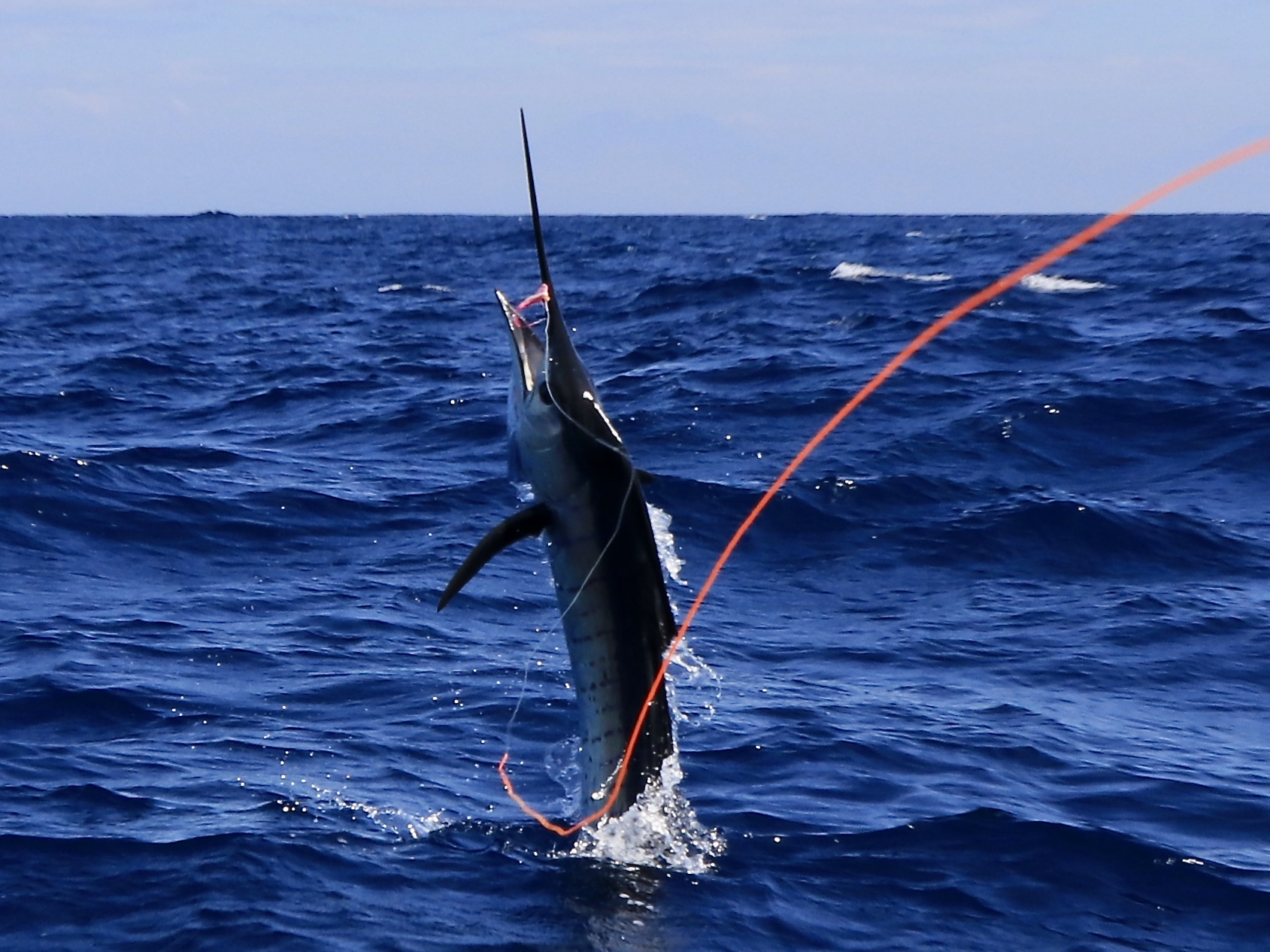 Awesome trip for the guys with plenty of stills, video as well as a couple of drones we’re looking forward to sharing their vid here soon…. 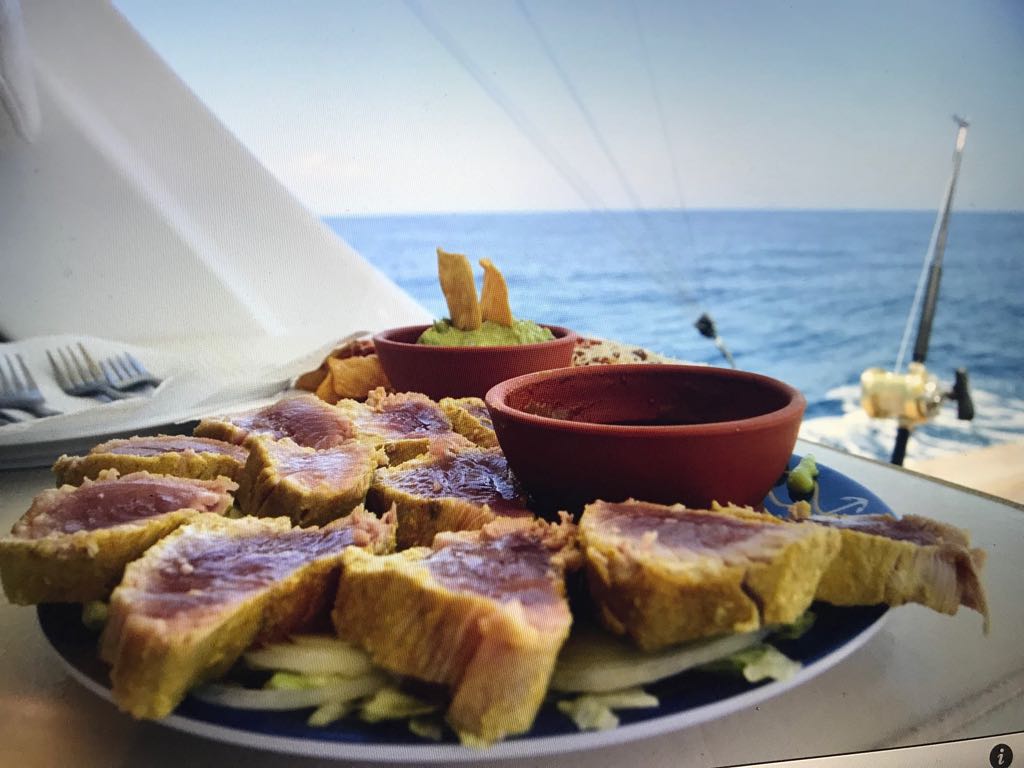 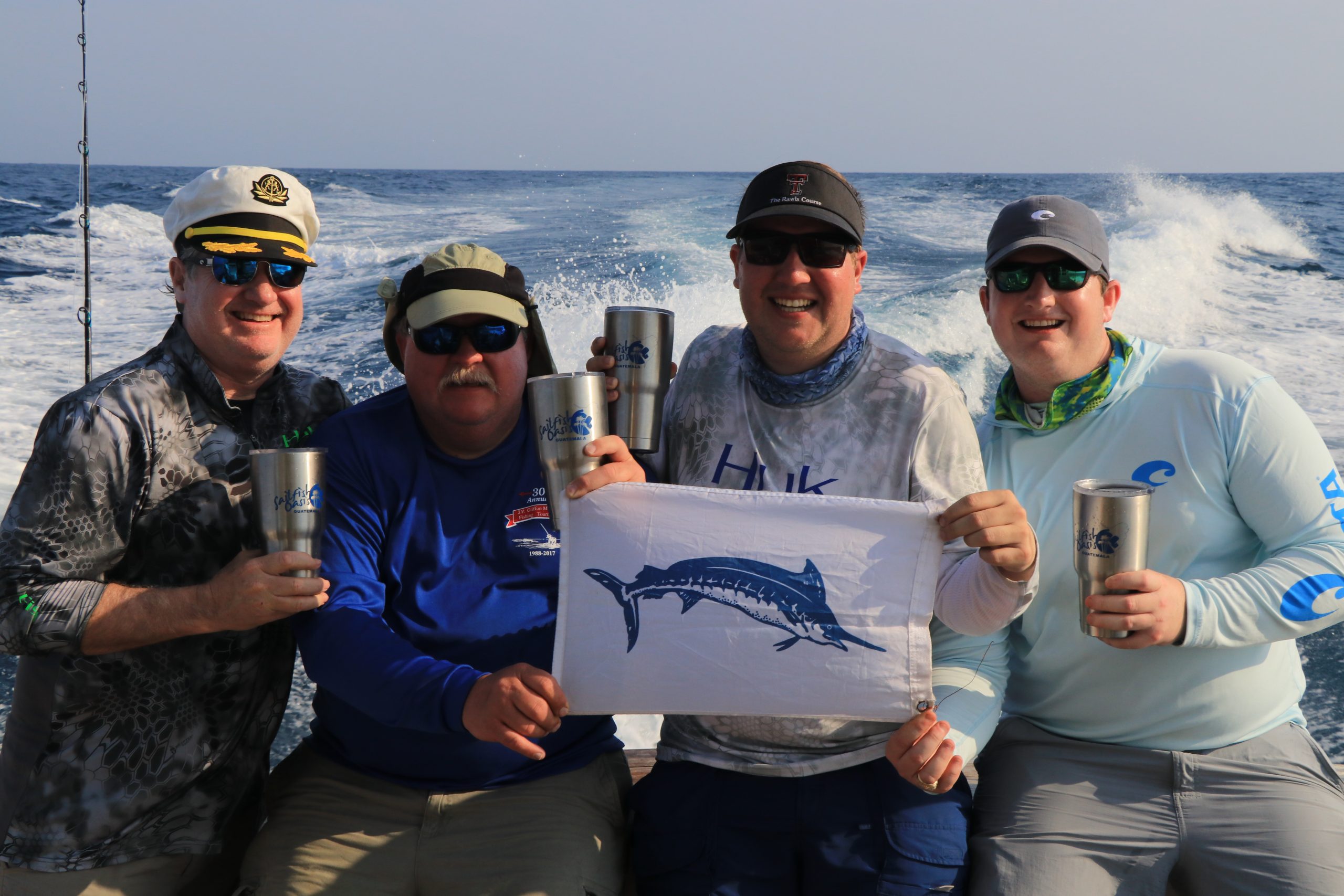 March 11-12 we caught up with Michael and Hunter Lane for the first time in 3 years. This time introducing Gary Jones and Lee  Doehring to Guatemala. 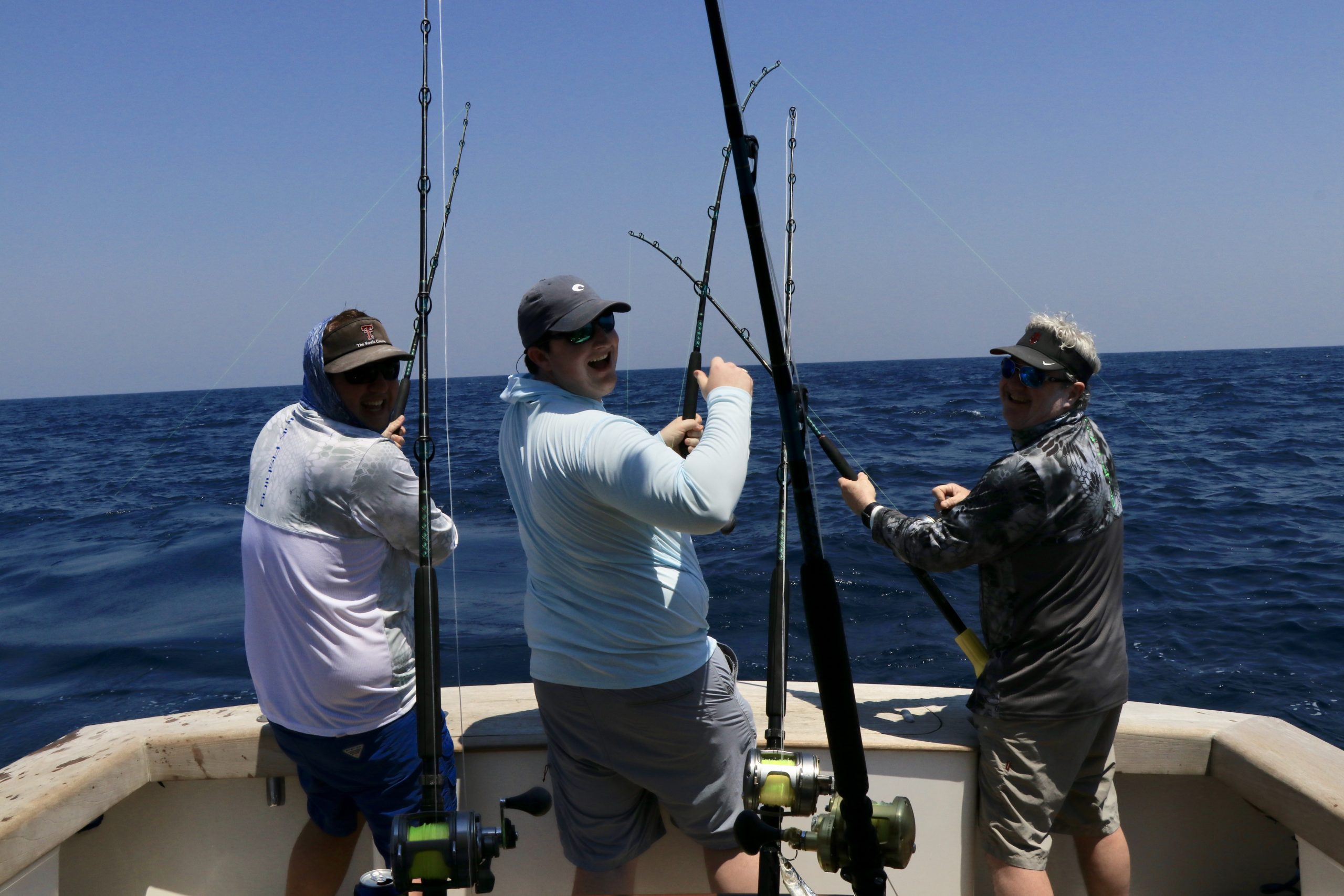 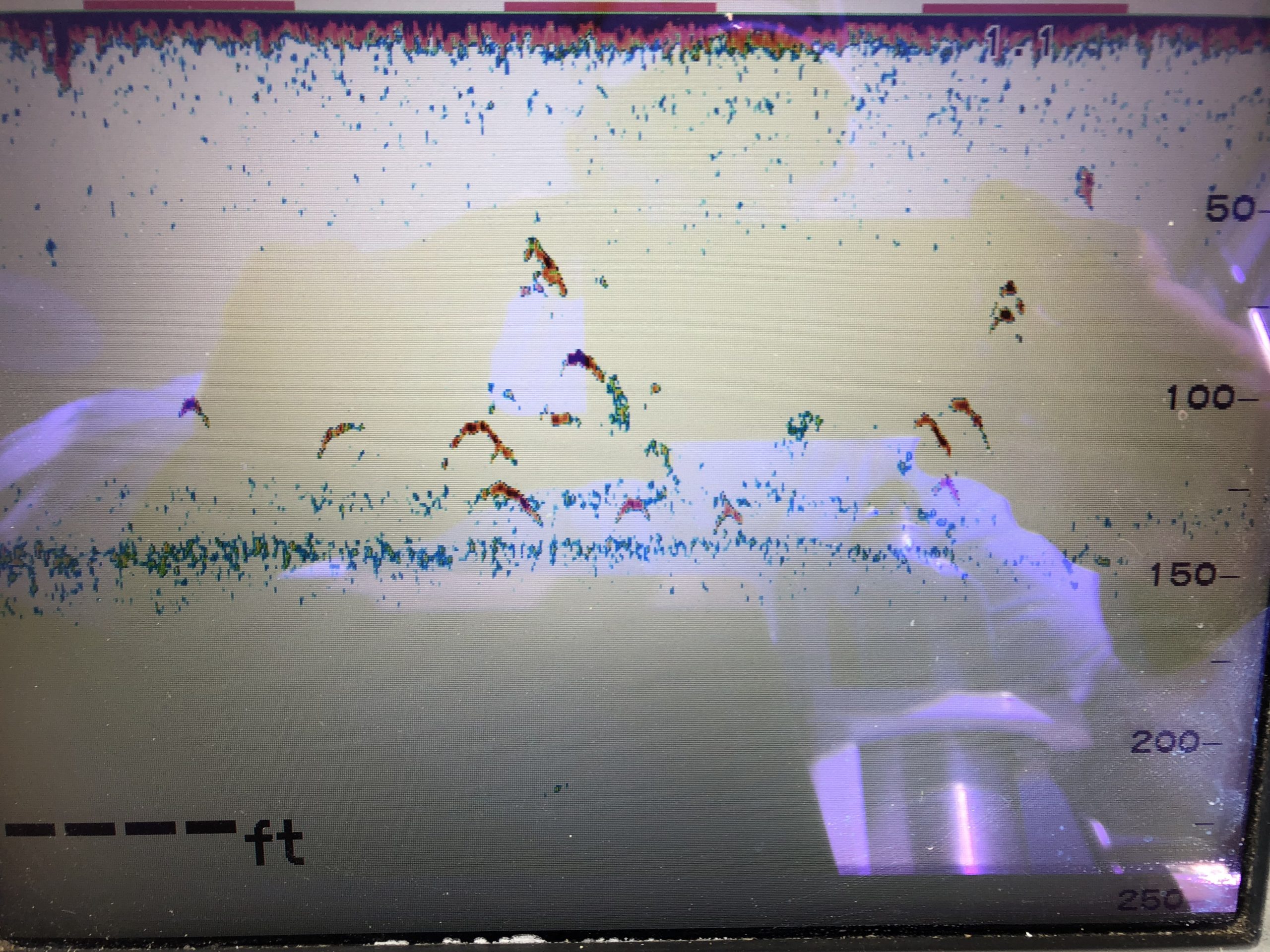 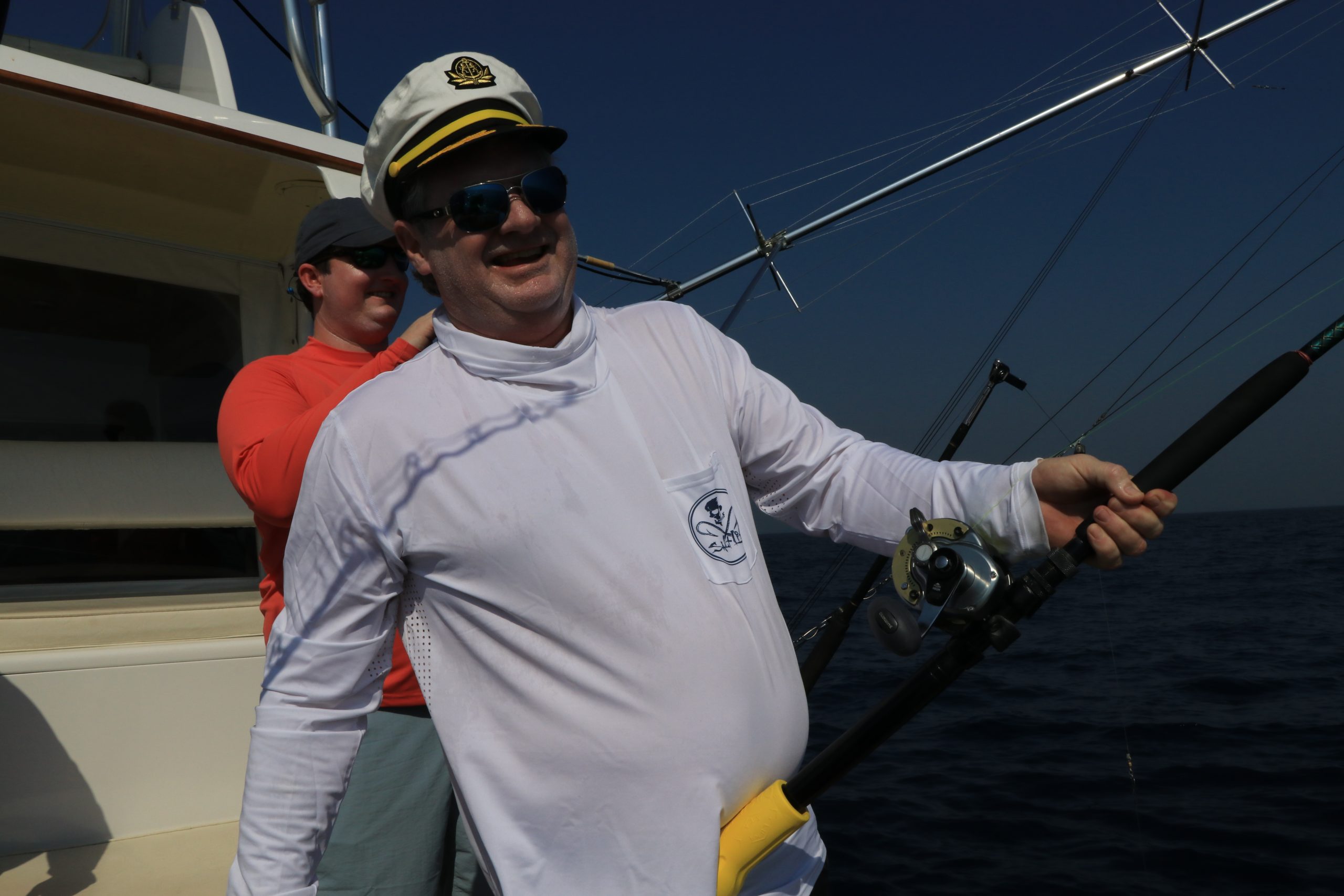 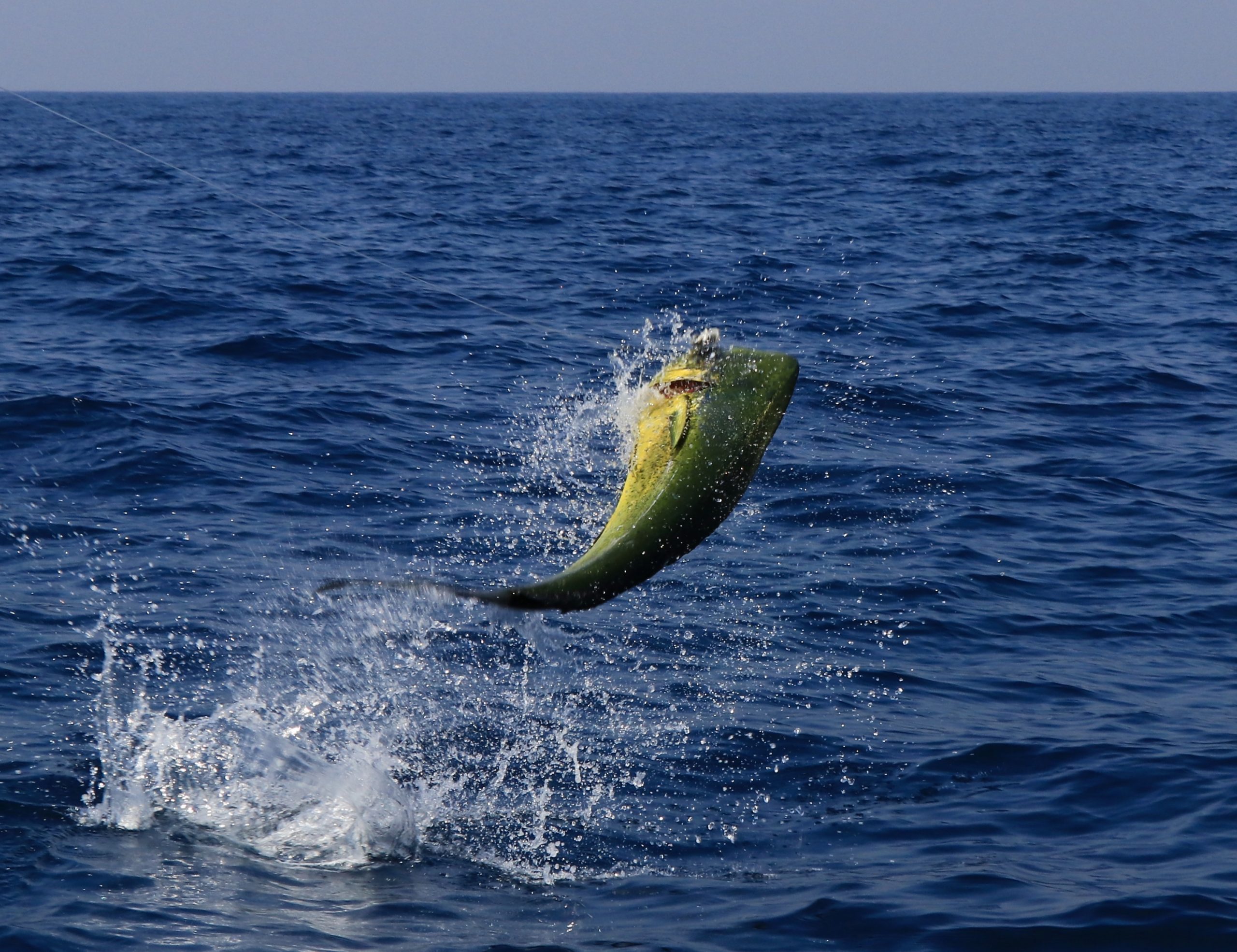 Some hefty ones of these around too… 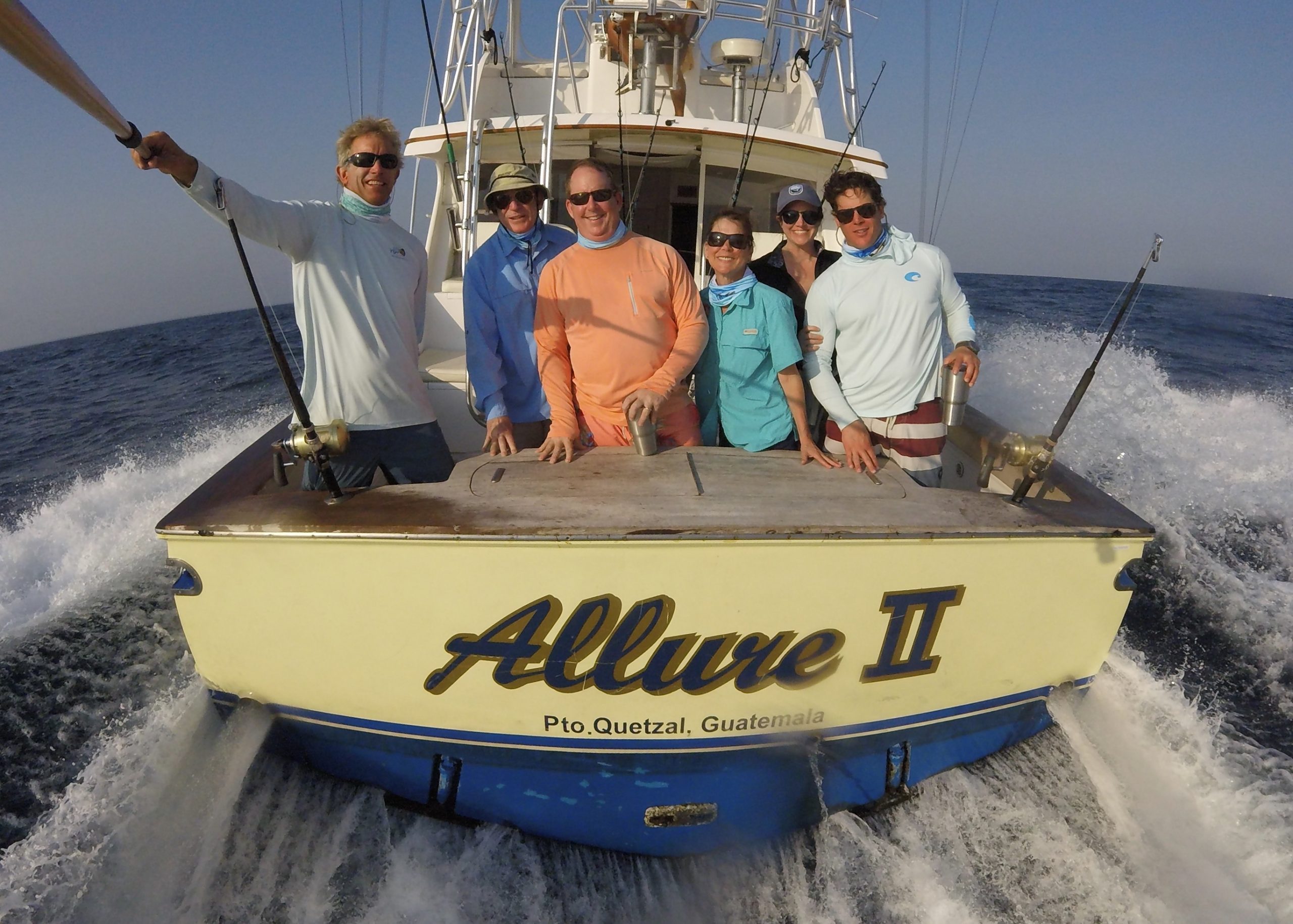 March 9-10. More familiar faces, good to catch up with this group. 64 sailfish in the spread and 49 bites as well as good fun with some tough fighting 20lb-30lb mahi mahi. 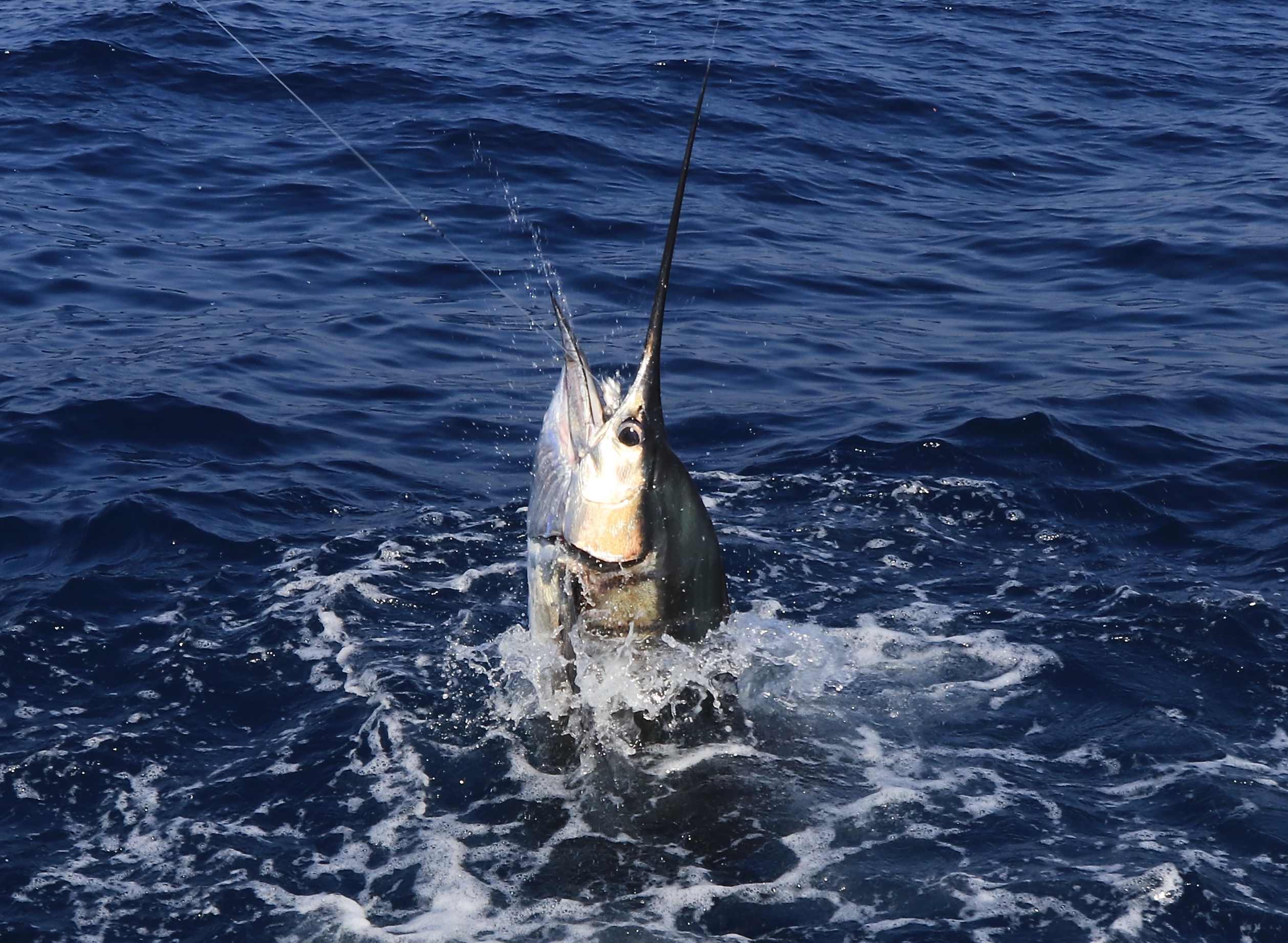 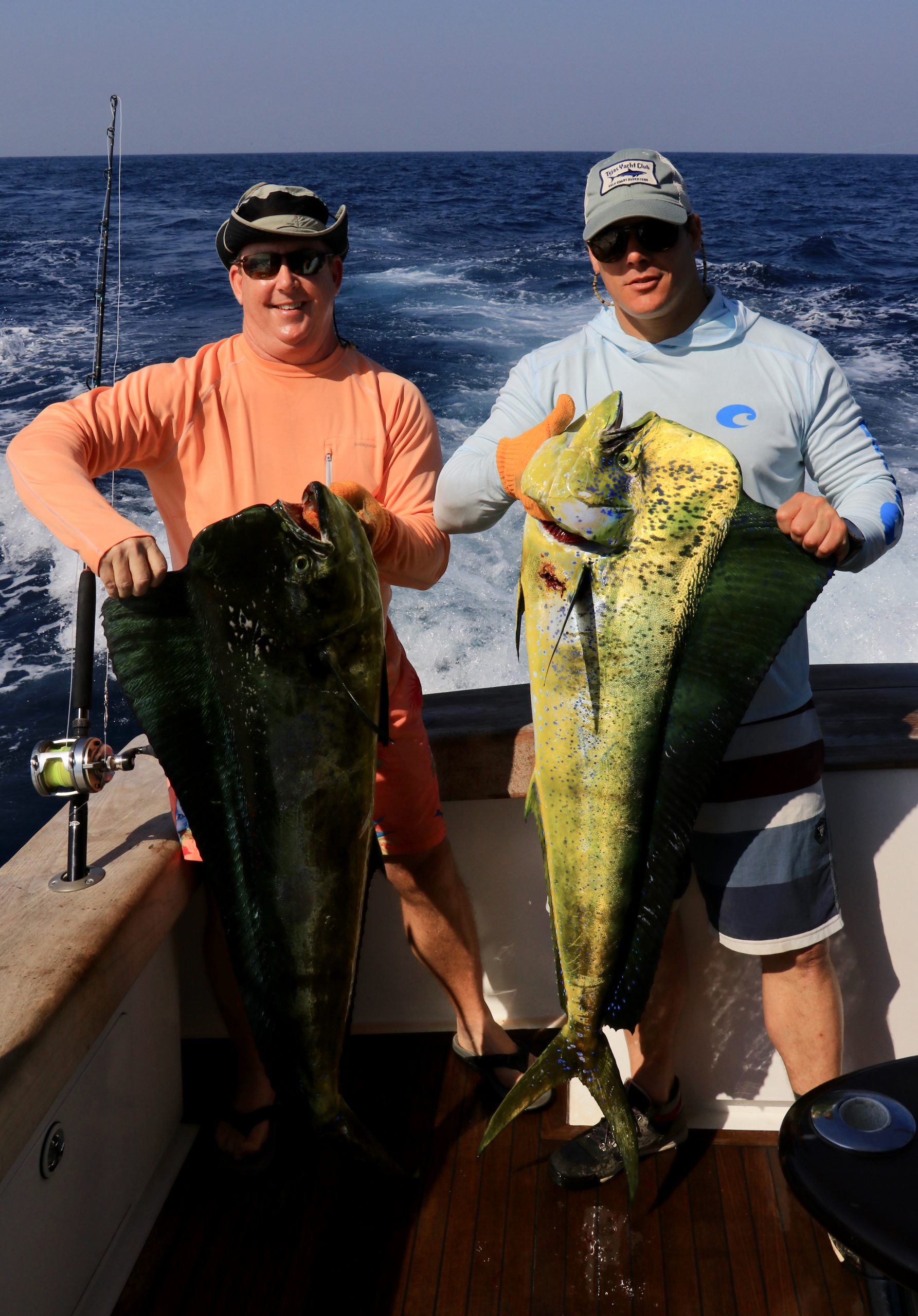 And a large time down the Lodge had by all. 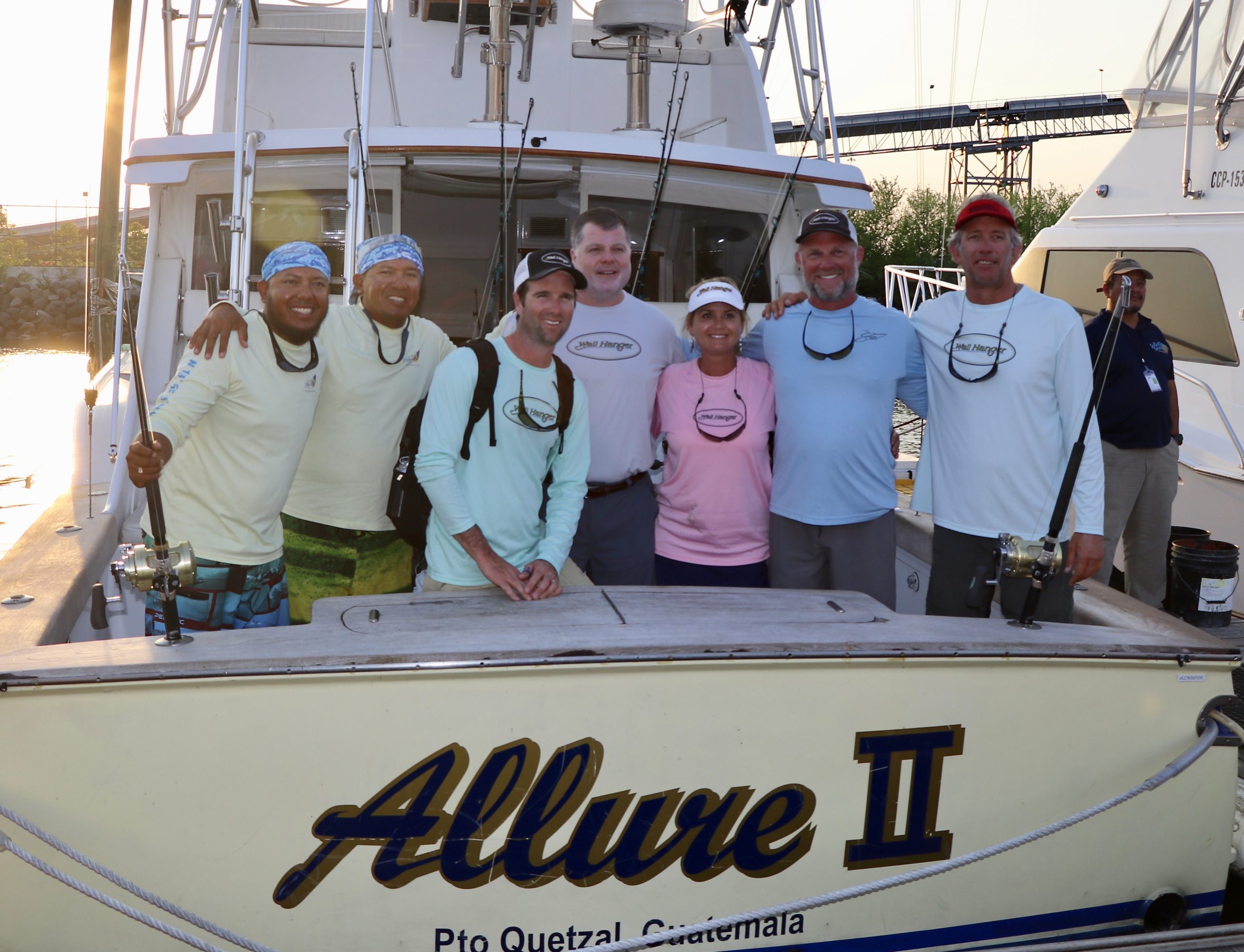 March 5-8th Brian and Stacy Allen owners of the 59′ Spencer ‘Wall Hanger’ with Capt Gray Blount and mate Jonathan from North Carolina made the trip to Guatemala to hone their skills before their season kicks in. 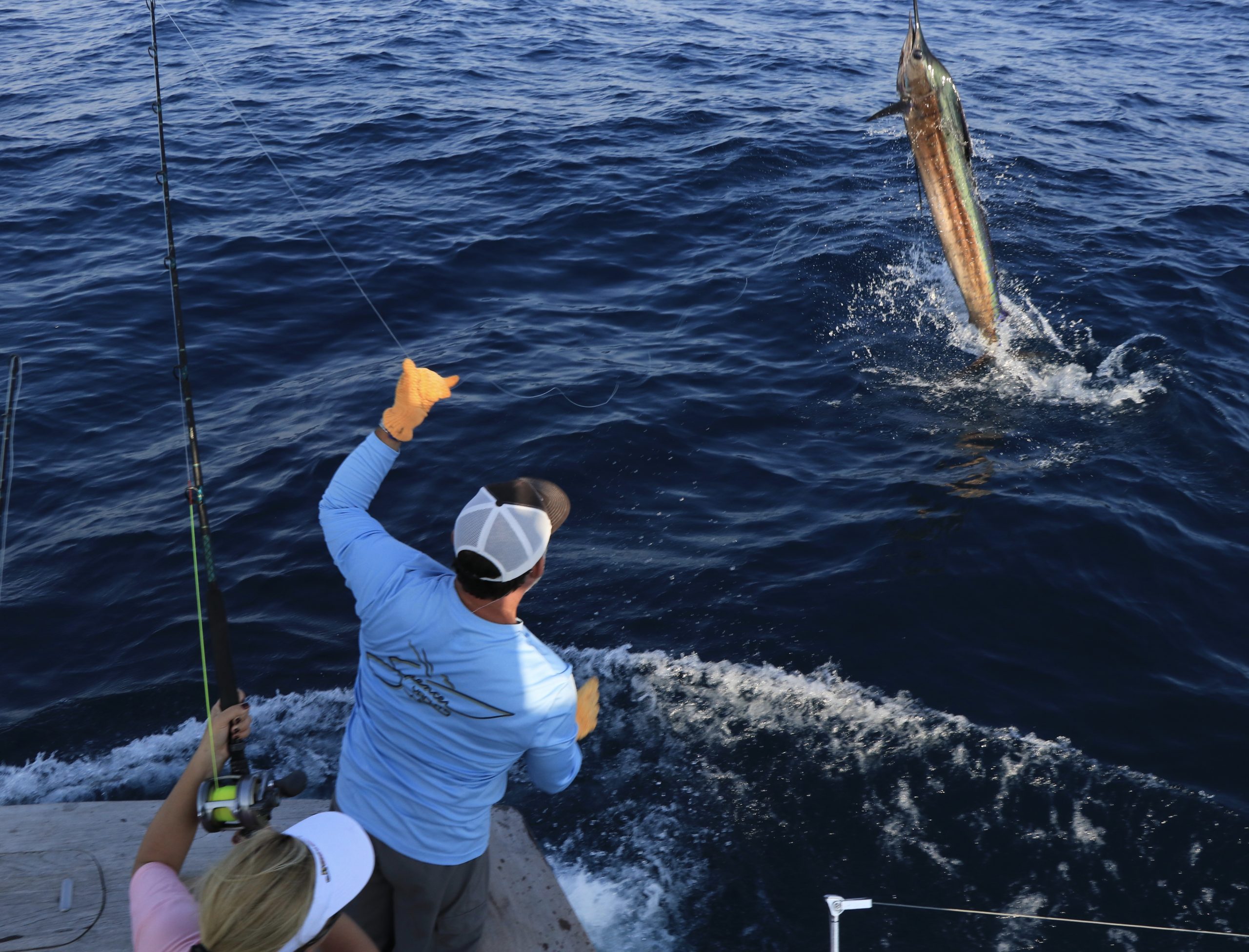 Lots of bait balls, sailfish and mahi mahi out there.Tough to pull them off the bait though raised 80 sailfish getting 62 to bite. 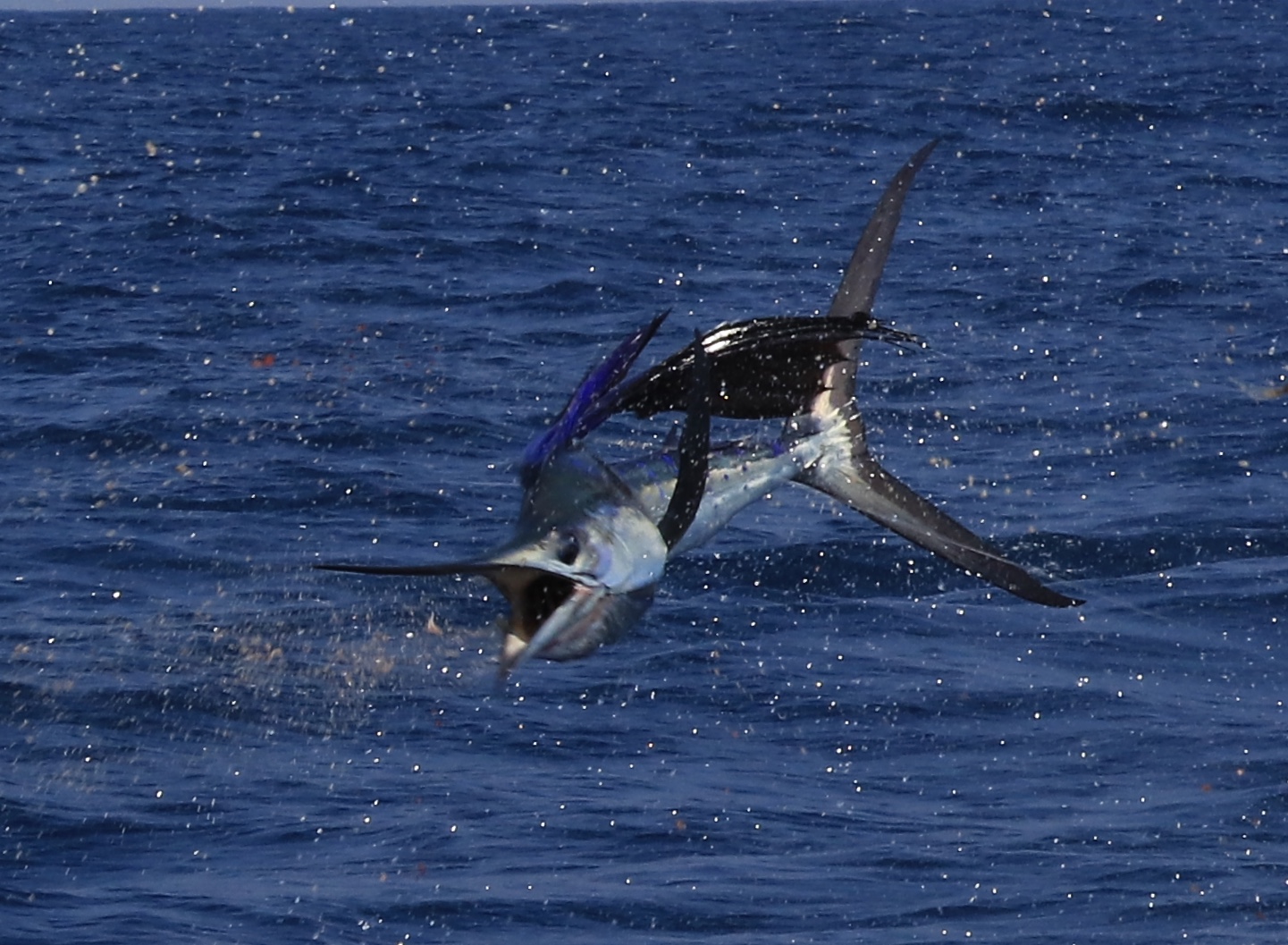 Stacy with a nice sail off the teasers…

Also some XL mahi’s and 2 yellowfin tuna of 40lb and 50lb in the boat. 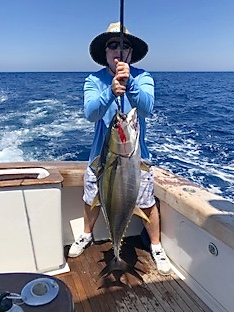 March 2-3 for their first trip to Guatemala fishing aboard Allure II and Capt Hook the above group from Louisiana were blown away by the sailfish bite here. 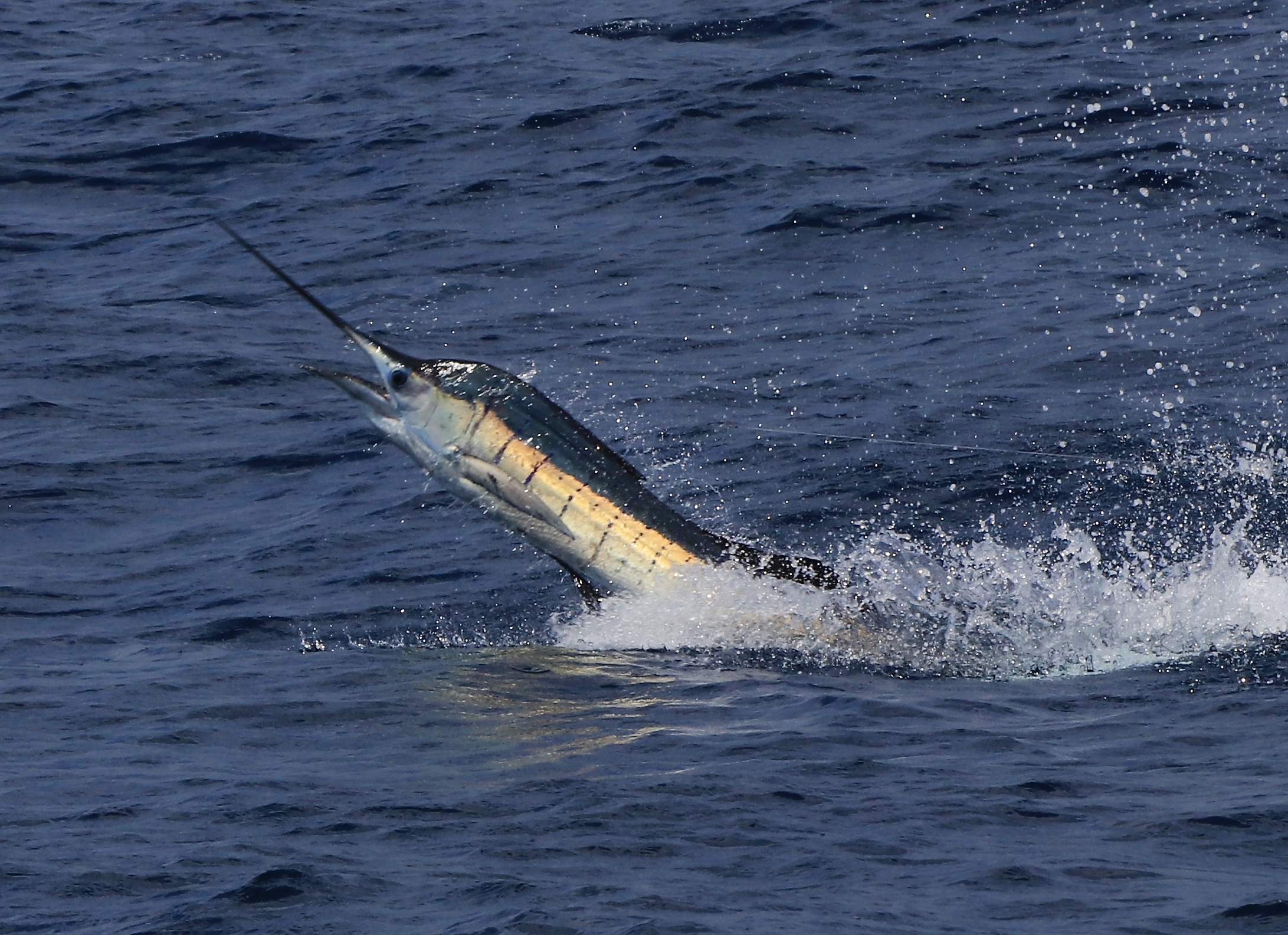 Over 2 days they released 63 sailfish from plenty of bites that included double headers and triples. Good time had and they’re re-booking for next year. That says it all…. 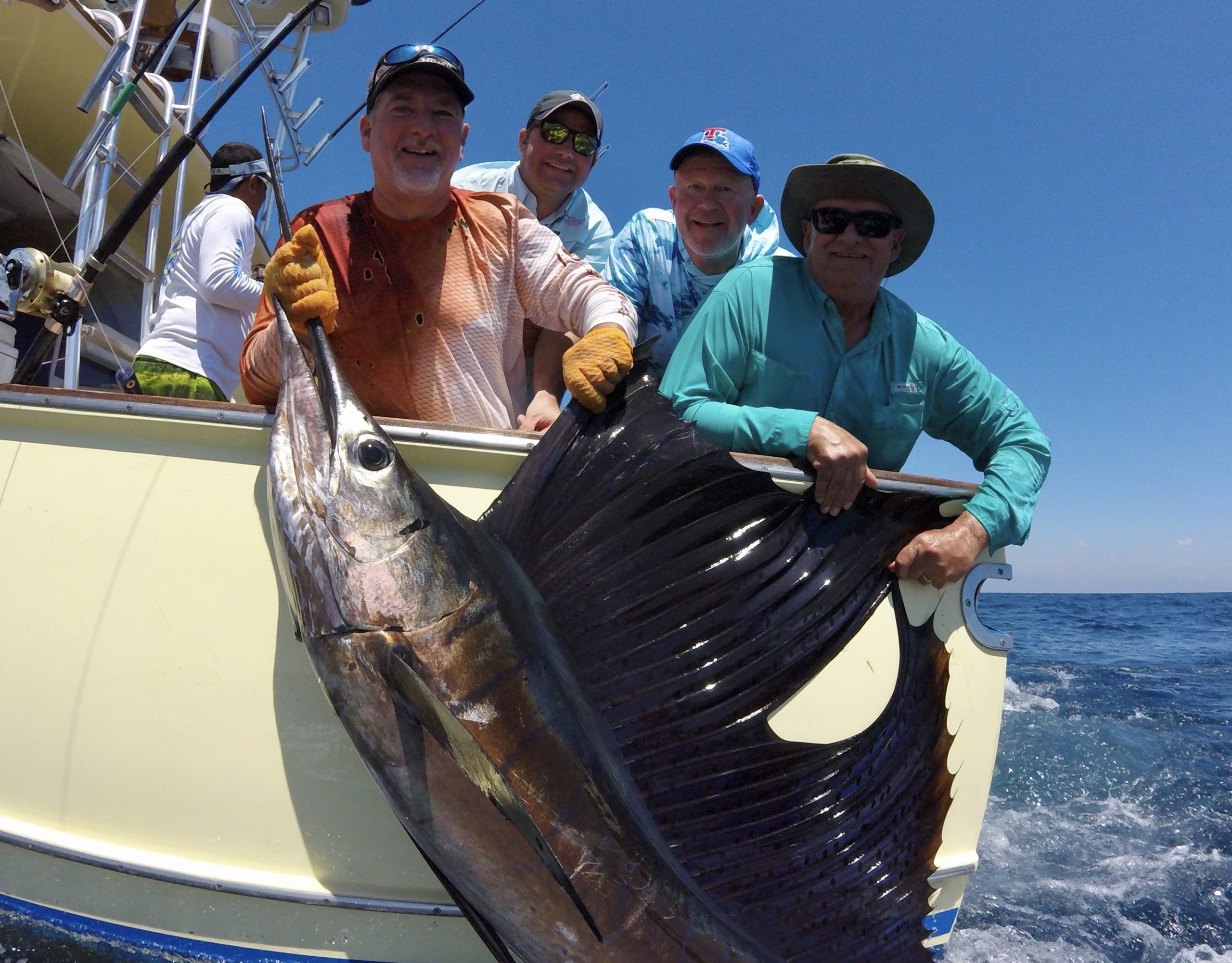 That’s a fatty for Brandon…..

The theme these past 2 weeks has been bait, balls of bait, shearwaters and booby’s picking, sailfish and plenty of XL mahi’s feeding along with tunas, porpoise, spinners and whales. A lot of life out there. Still a few openings in April, get down and get into it, contact: