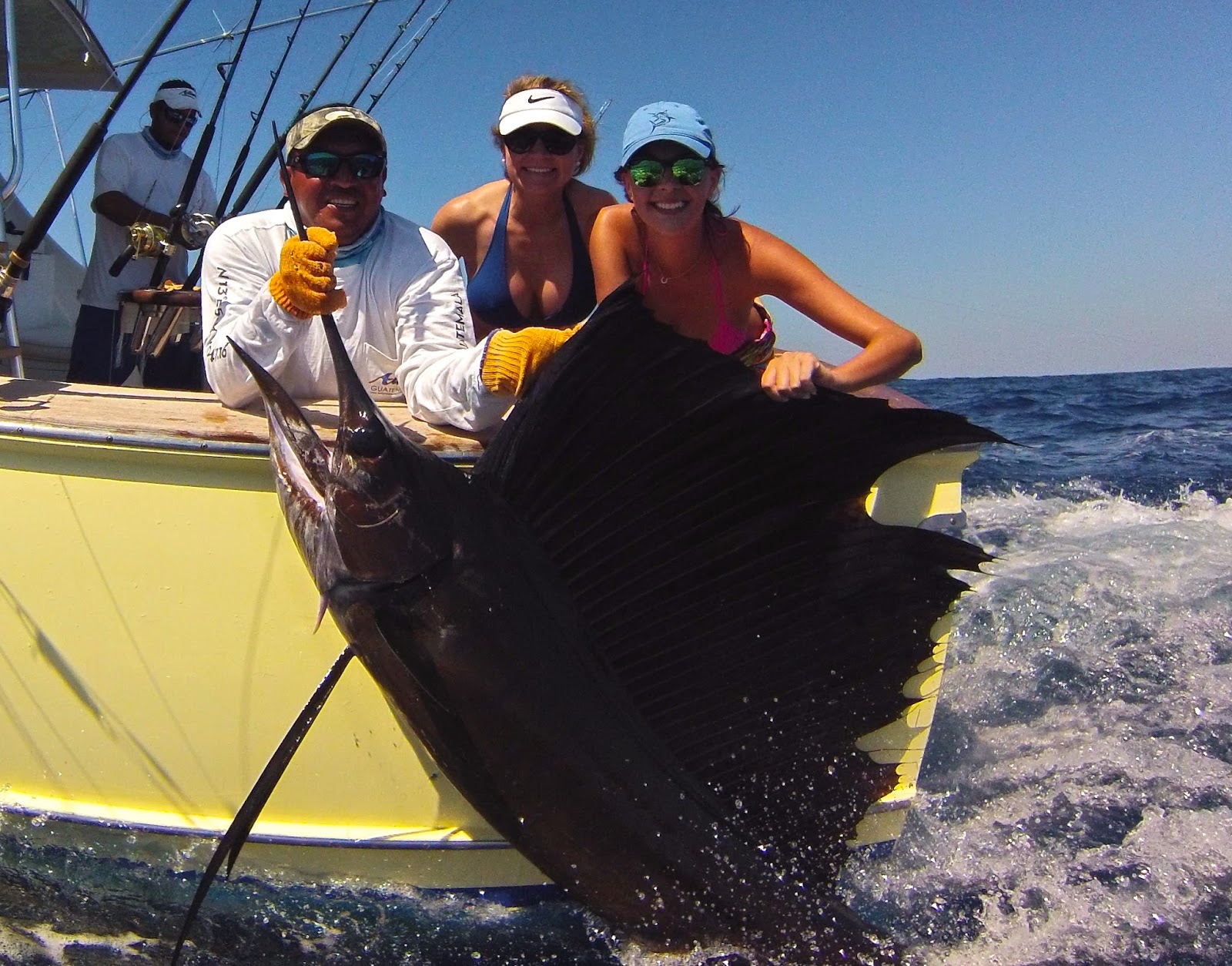 Heather Mc Minn and Fernanda Gaudiano.
March 9th and 10th first timers to Guatemala from Austin, Texas, Jason and Heather Mc Minn with good friends Patricio and Fernanda Gaudiano came down here with no expectations and were blown away by their experience both on and off the water!! First day out a long run to the west proved worth it with not a whole lot of  encounters, though most encounters multiple sailfish in the spread…..the day was made up of 3 x singles, 2 x double headers, 2 x triple headers and a quad released out of a quintuplet hook up!! Plenty of practice at the ‘sailfish shuffle’ out there. Our fourth encounter for the day was 5 sailfish hooked up with one falling off just before the release, we released the other 4 with Jason getting a big female of well over 150lb’s, the other 3 were small males. A great first day introduction for the crew then with 17 released from 21 bites! 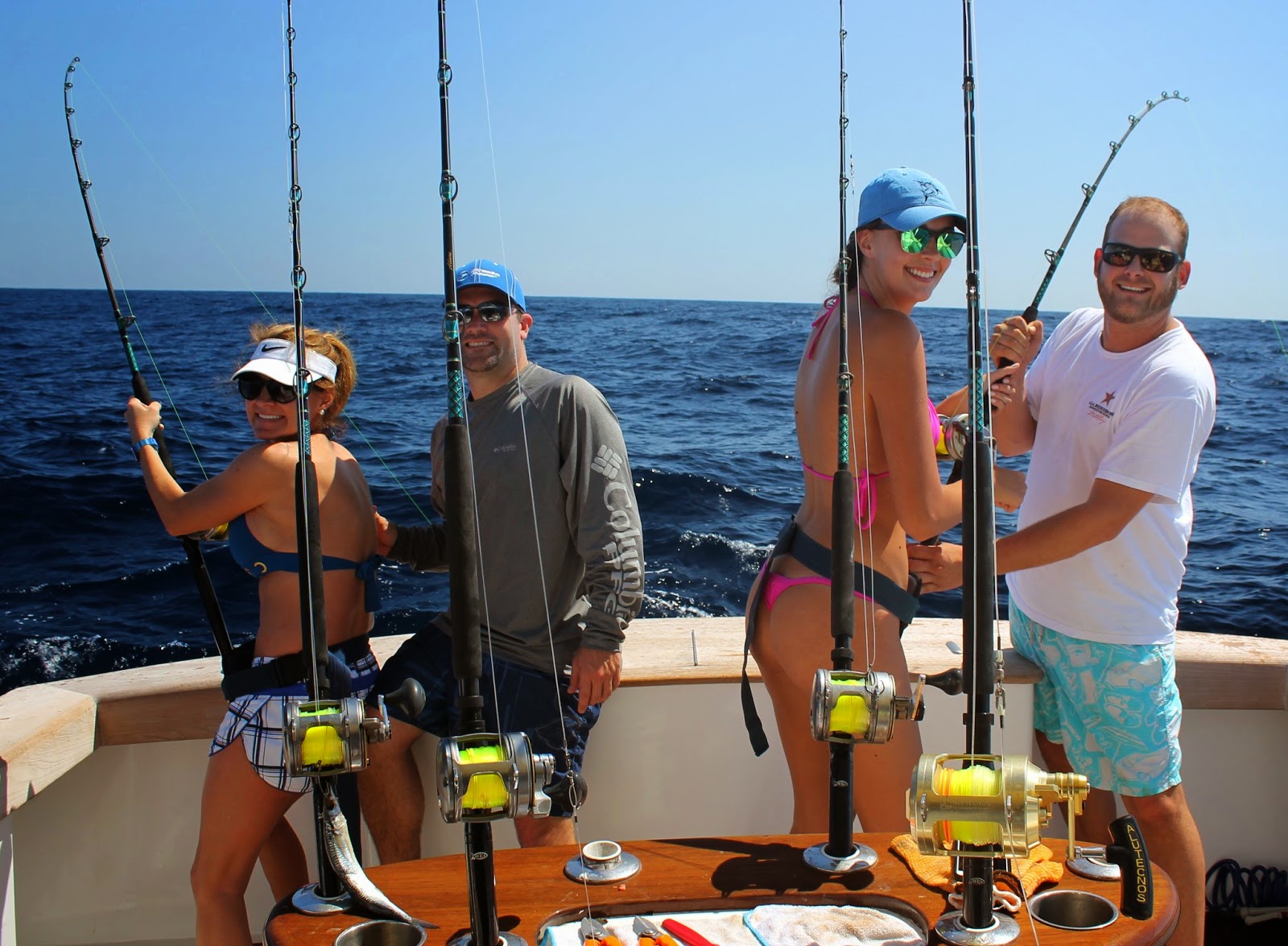 First double header for the Heather and Fernanda…
With only a couple of days here the girls decided to head up to Antigua for the day to check out the sights, sites and shopping. Fishing Jason and Patricio with the current to the west pushing offshore we headed today to the top eastern corner and found fish pretty much from the get go and had good consistent action for the rest of the day. The guys were hooking all their own fish today and did a great job picking it up quickly and only missing a few. Patricio is a keen free diver/spear fisherman so spent a bit of time in the water as well capturing this great shot while at it… 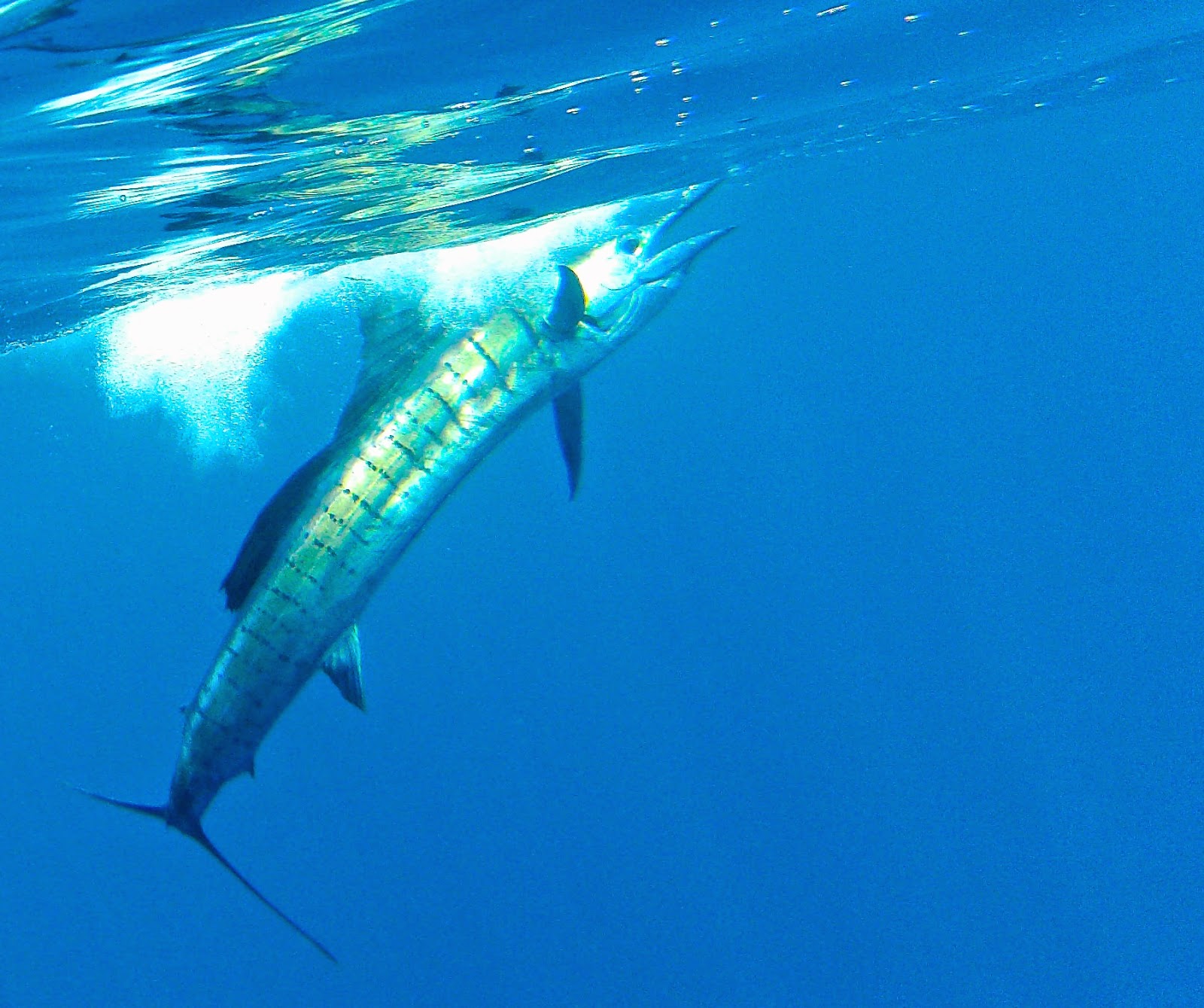 Another very good day out there with 20 releases today from 29 bites. They finished off their trip with a night up at the Santo Domingo in Antigua and are re-booking a trip for November after an excellent time on the boat, at the lodge and in Antigua. Looking forward to catching up with this crew again!! 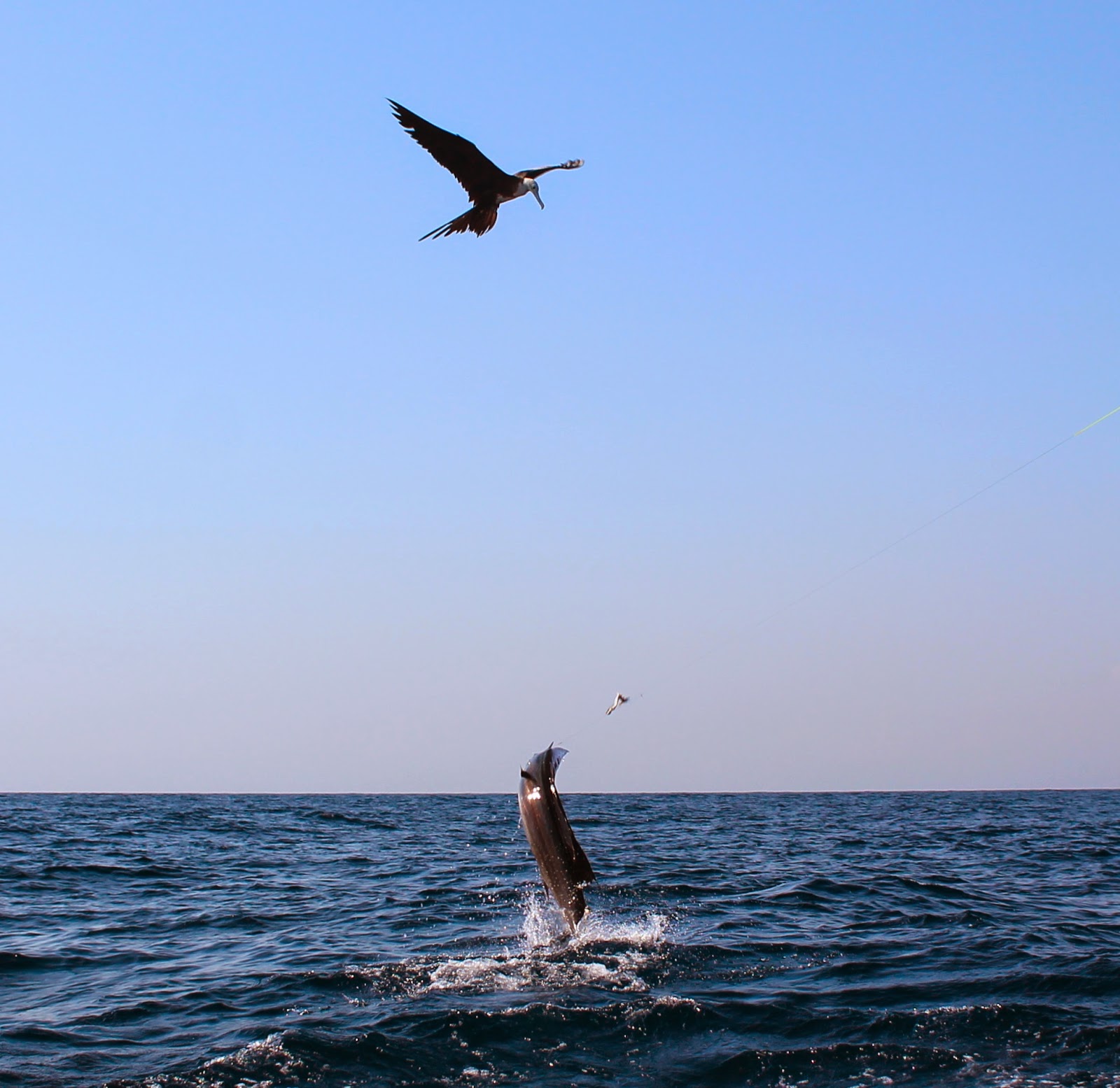 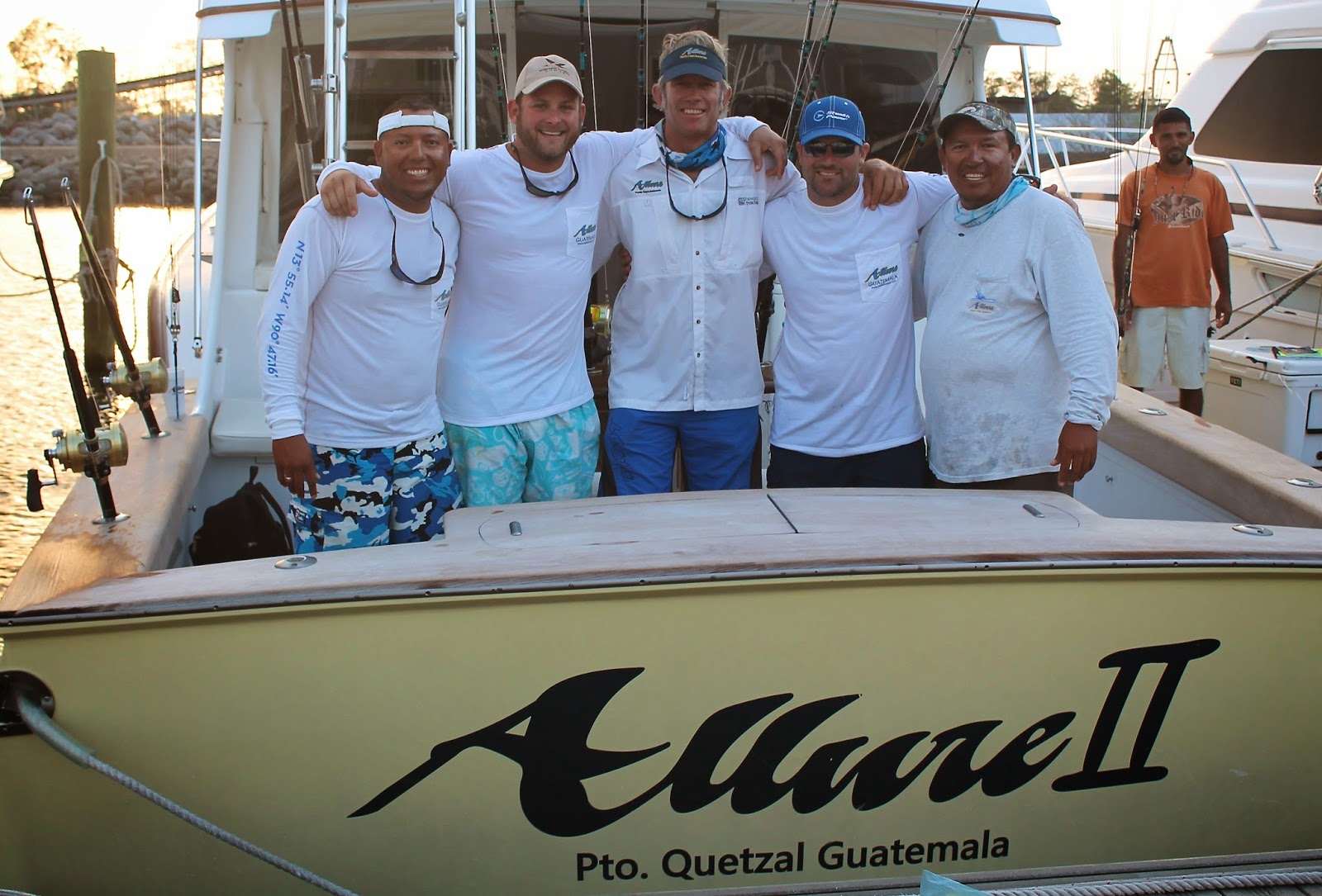 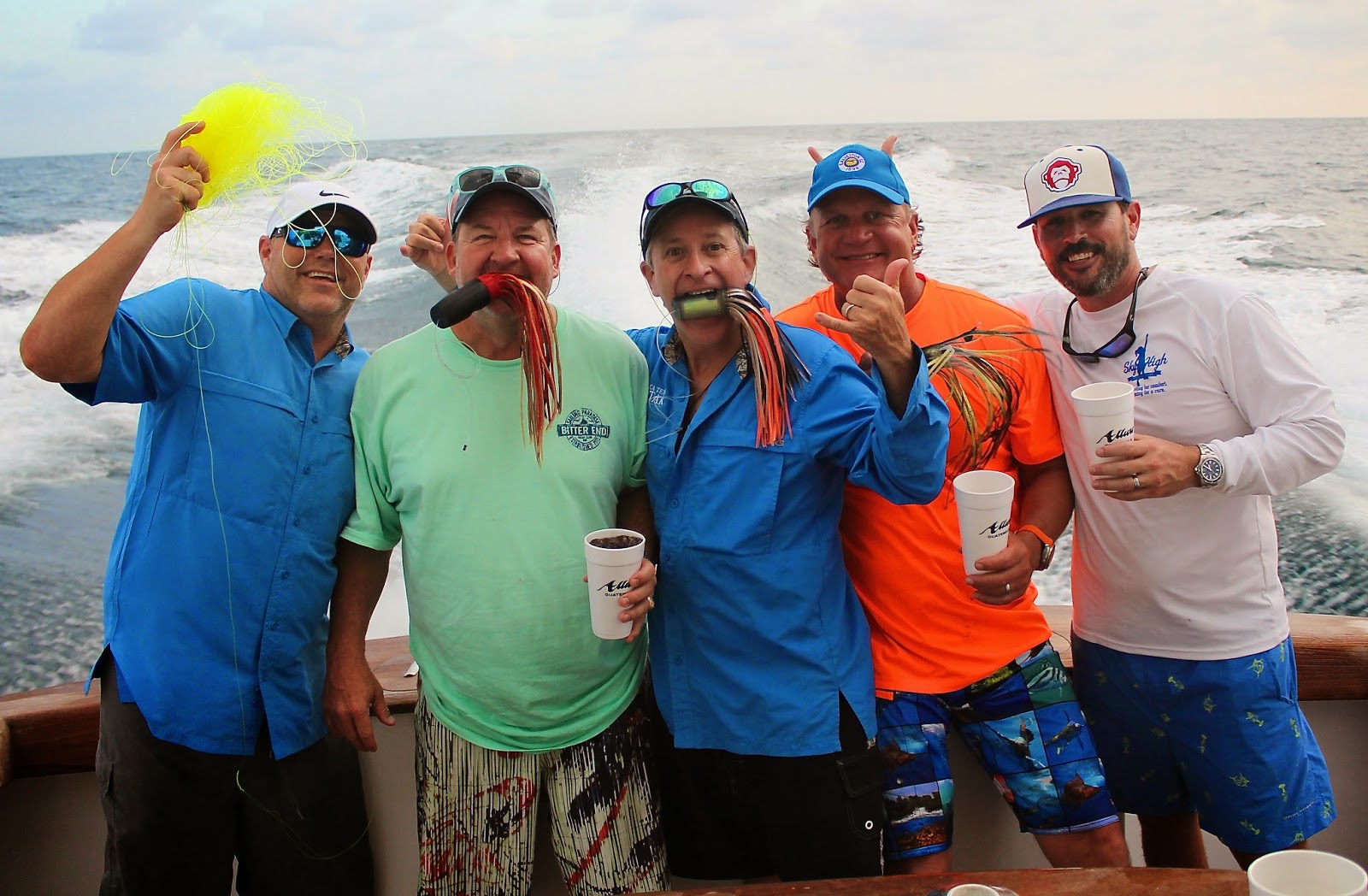 Billy Backlash, Scott Cone, Hill Dishman, Kelley Irwin and Chief Tuazin
March 12-13-14, good times fishing the above crew as always!! First day out we covered a large area trying to find the best of it though never really getting on them, and get the rust cleaned off at the same time with the offers we could find them. We raised 18 for the day getting 15 of them to bite and the conversion rate was a little low though at least some practice for the next 2 days! After fishing out wide we concentrated the next 2 days at the bottom of the pocket all 9 to 12NM off the beach, there were some blue marlin around too with plenty seen amongst the fleet though a lot of window shoppers out there.. 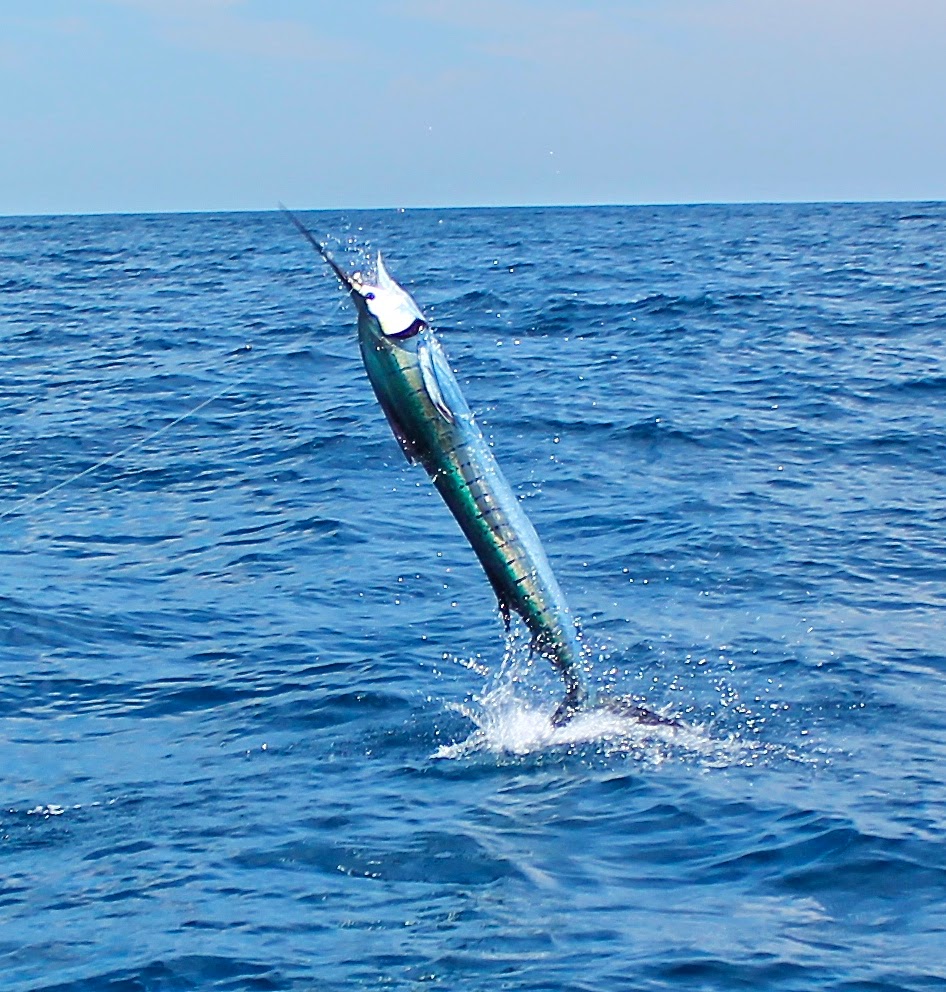 Second day out we raised a blue right off there bat that made a big hole behind the right teaser though didn’t touch it and we never saw it again, for the rest of the day we had 27 sailfish bites releasing 18 of them, at the end of the day we raised another blue that stayed deep on the right teaser though never looked like eating. The fishing picked up by the day and our last day on the water we released 19 from 31 bites, right at the drop off here at 9NM at the end of the day there were some bonitos popping so we caught a couple and put them out as livies near the edge. It wasn’t long and we had a nice big blue coming at our long bait hard from left to right, it’s tail, dorsal and bill clearly out of the water showing its size…..it missed the bait and never came back……Whiskey Tango Foxtrot!!!!!?????? That summed up our marlin fishing for the trip. Good times as always with these guys, we’ll run over the aggressive ones next time!! 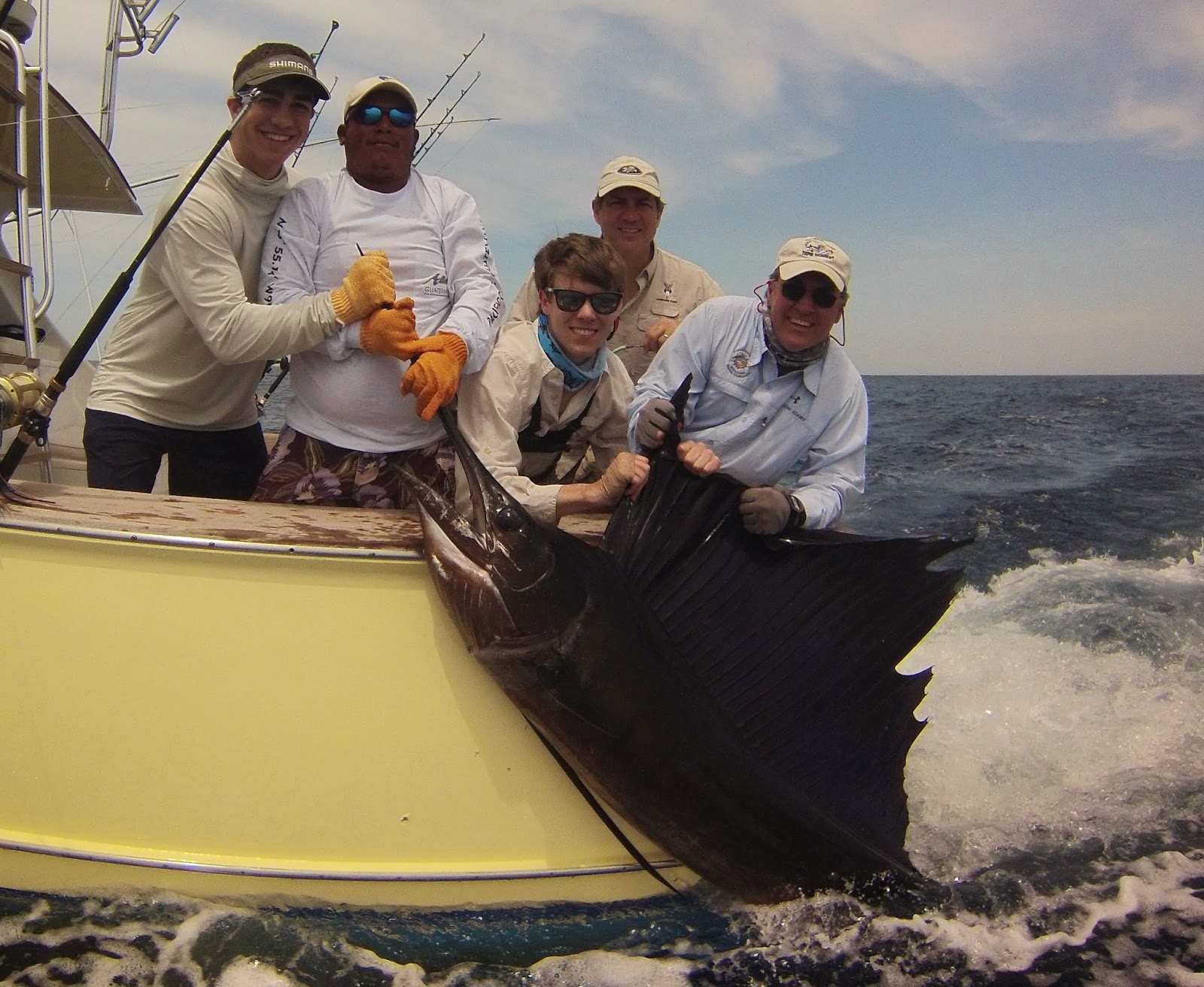 Graeme Wallace, Andrew Adams with dads John Wallace and Glen Adams
March 15-16-17 and as mentioned above, the fishing just got better every day, the timing was perfect for the above group on Spring Break with John and Graeme Wallace returning for their second year in a row this time with Glen and Andrew Adams. Our first day out fishing the bottom of the pocket to the west today we got into them pretty good in the afternoon releasing 26 from 36 bites and getting into a couple of small mahi’s for lunch. The afternoon was just starting to turn on and the crew opted to head in a couple of hours early to hit the pool back at the lodge.
The next day they were joined by good friends, another father and son team on Spring Break, Mark and Paul Langford for the day… 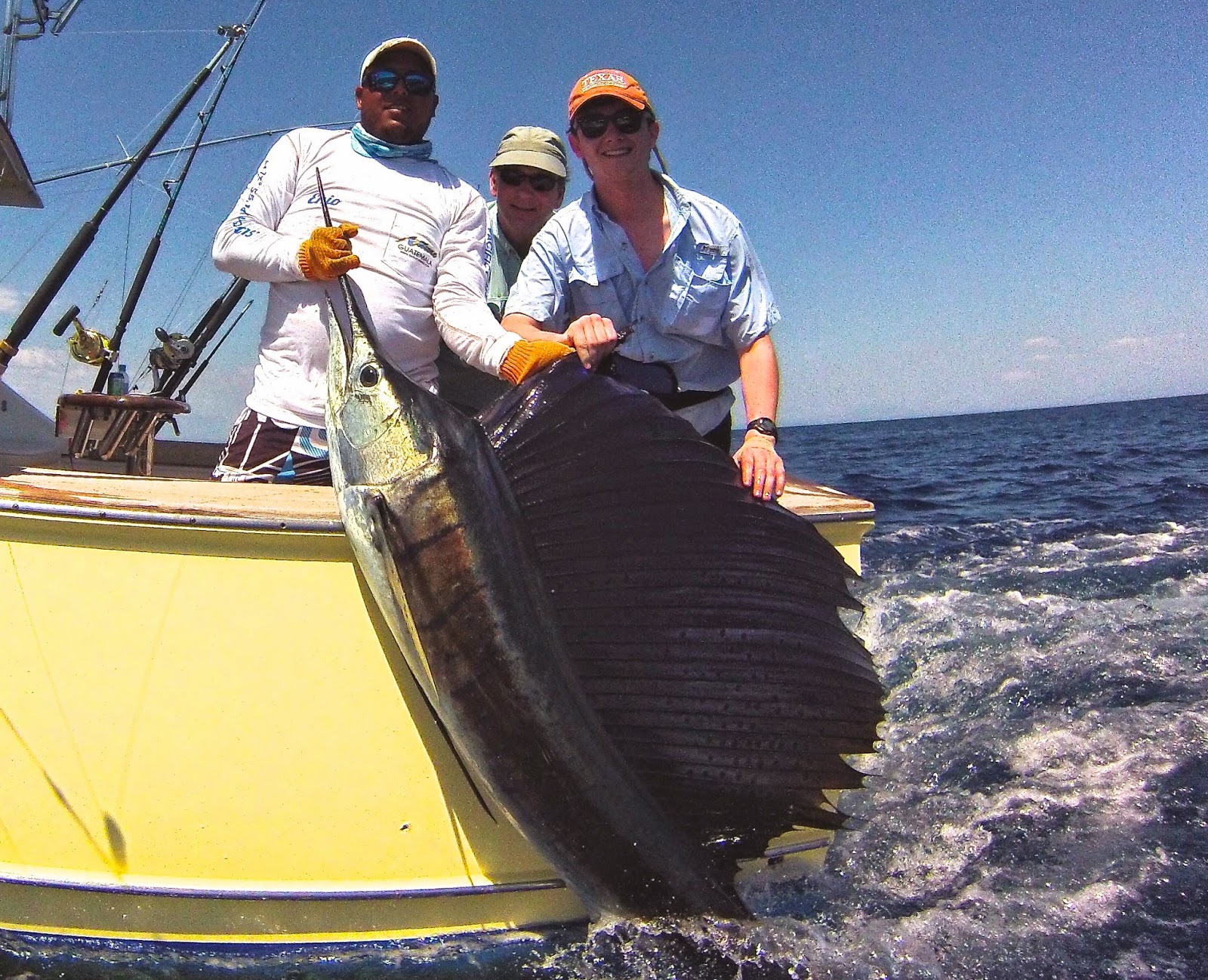 Mark and Paul Langford timed their one day on the water perfectly!
And the fishing just got better again….we started inshore getting a couple of early releases before finding some flotsam and getting into some mahi’s, including a couple of nice ones… 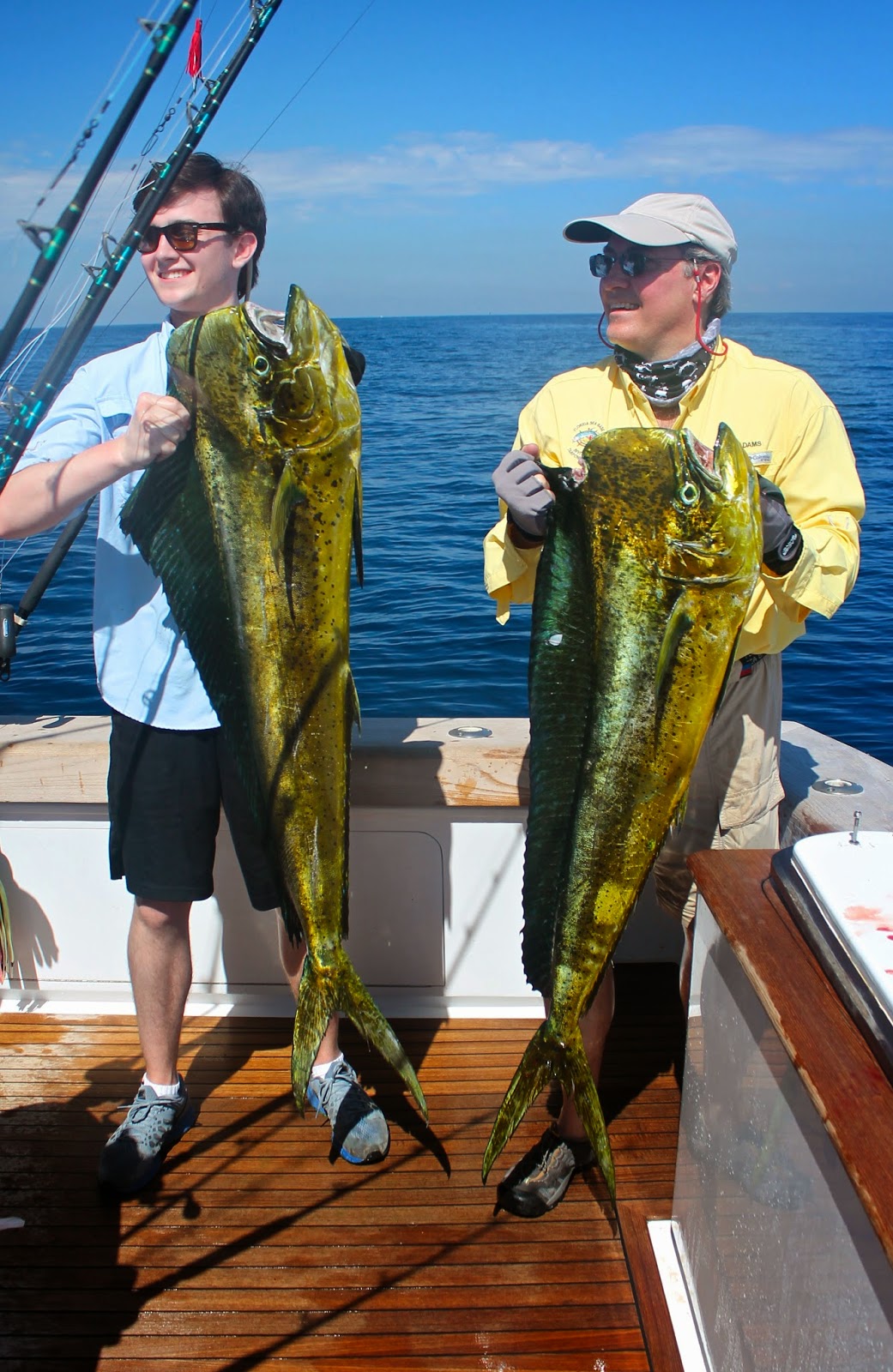 Paul and Geln with the better 2 of the 6 boated.
From there we slowly moved to the bottom eastern side of the pocket with the current and the fish that were concentrated in that corner were biting hard! We raised 59 and released 34 from 55 bites, hitting 60 releases in 2 days we returned to the dock early once again with some burnt out though very happy anglers.
Back with the original crew today we found the fish up on the flats pushed up there with the current and spread out over a larger area and 12NM further to the east than they were the day before. Another good day for the guys with 13 released from 19 bites to make it a total of 73 billfish released for the trip and a bunch of mahi’s. Great Spring Break for the guys! 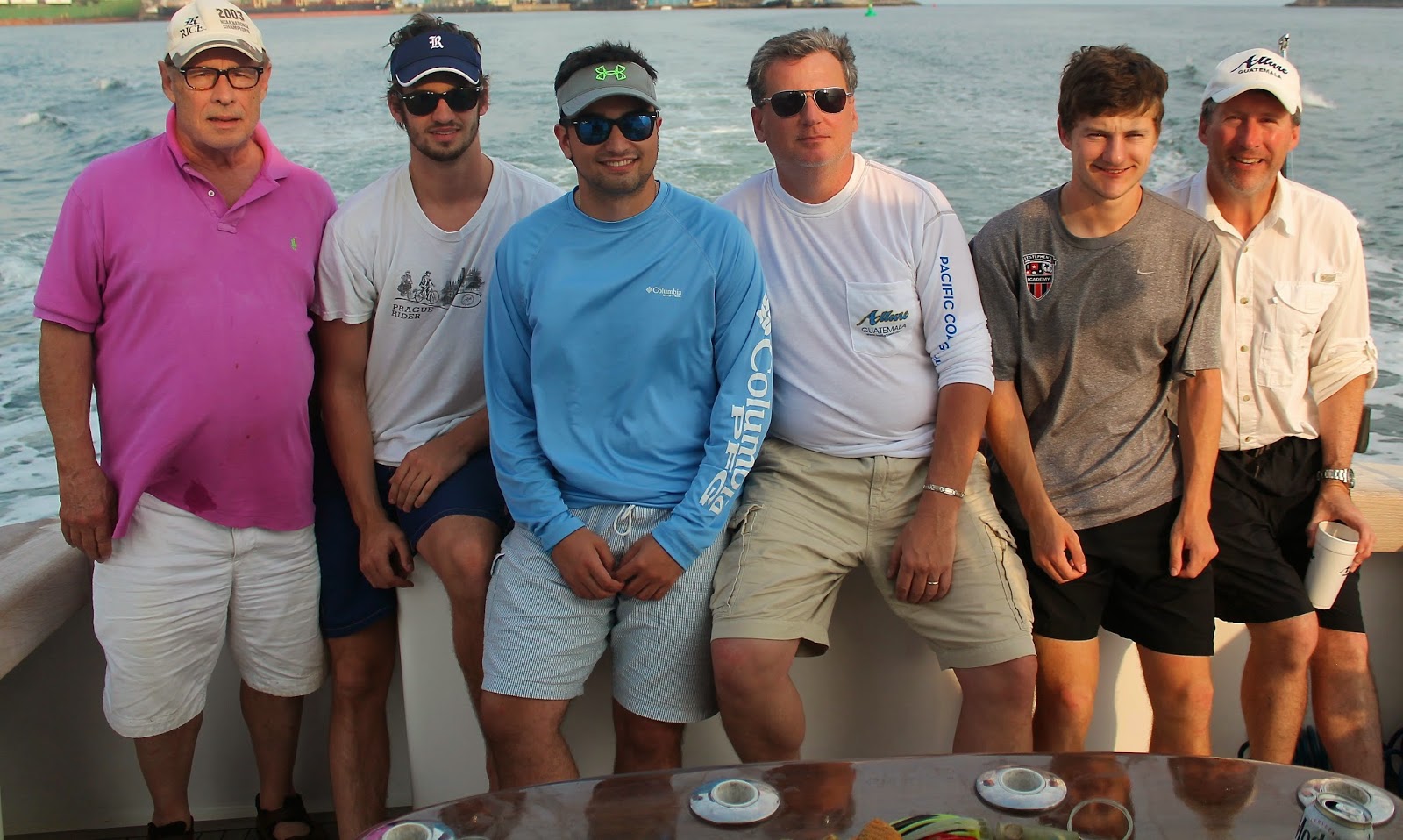 Jimmy & Cody Treybig, Matthew & Scott Snyder and Jim & Jay Old
March 18th we fished the above group for one day on Allure II, another father and son Spring Break group in for a short trip. We fished with Jay and his family a few years back and now with the boys all about to hit college they came down for the best trip….With the fish heading further to the east our previous day out we tried the western flats and got into some great fishing in ideal conditions out there. A good steady bite all day out there with 19 sailfish of the 22 raised biting and near the end of the day Matthew Snyder got the release on a small tough stripey caught off the short teaser on the 30lb pitch rod…. 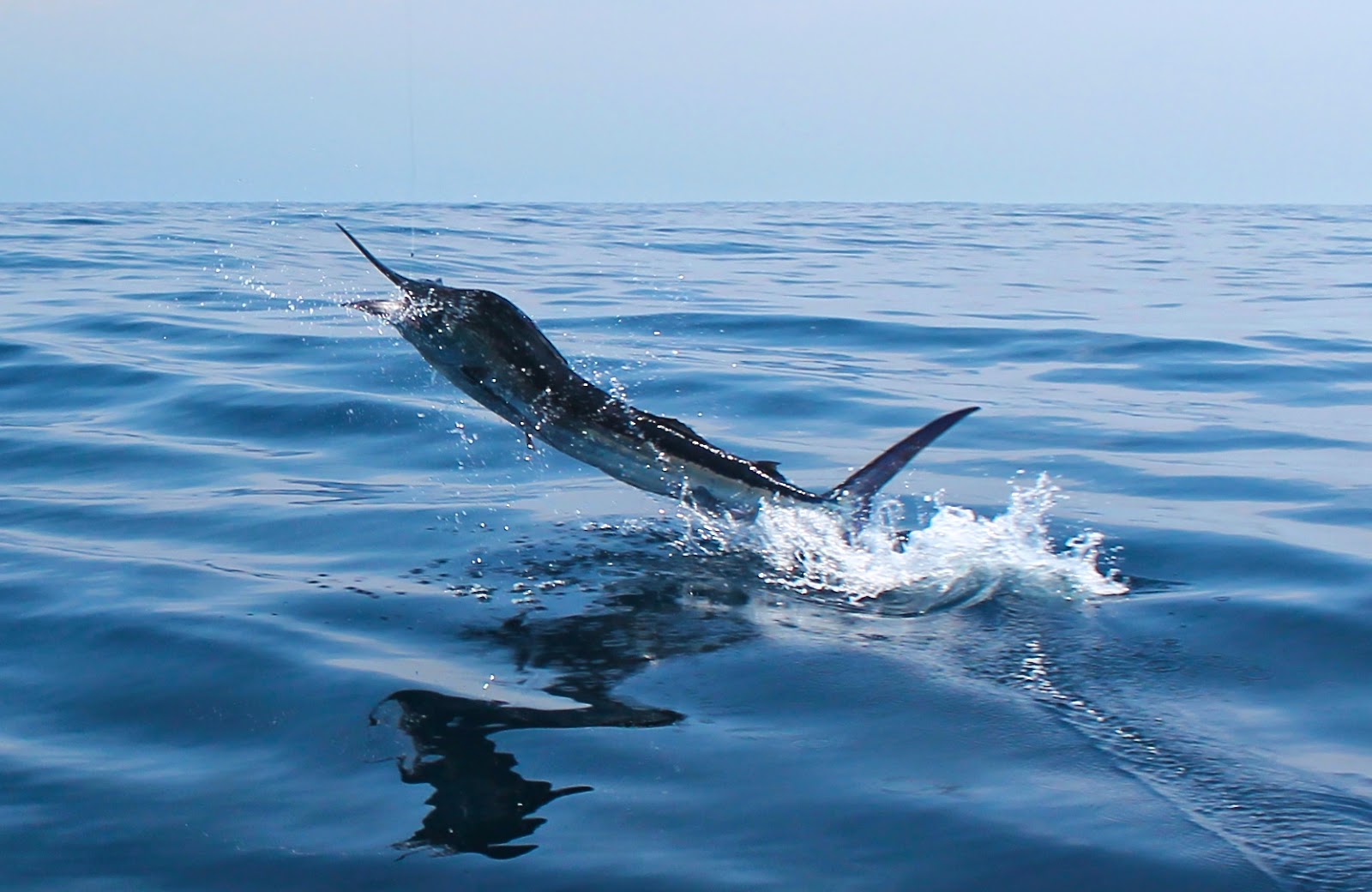 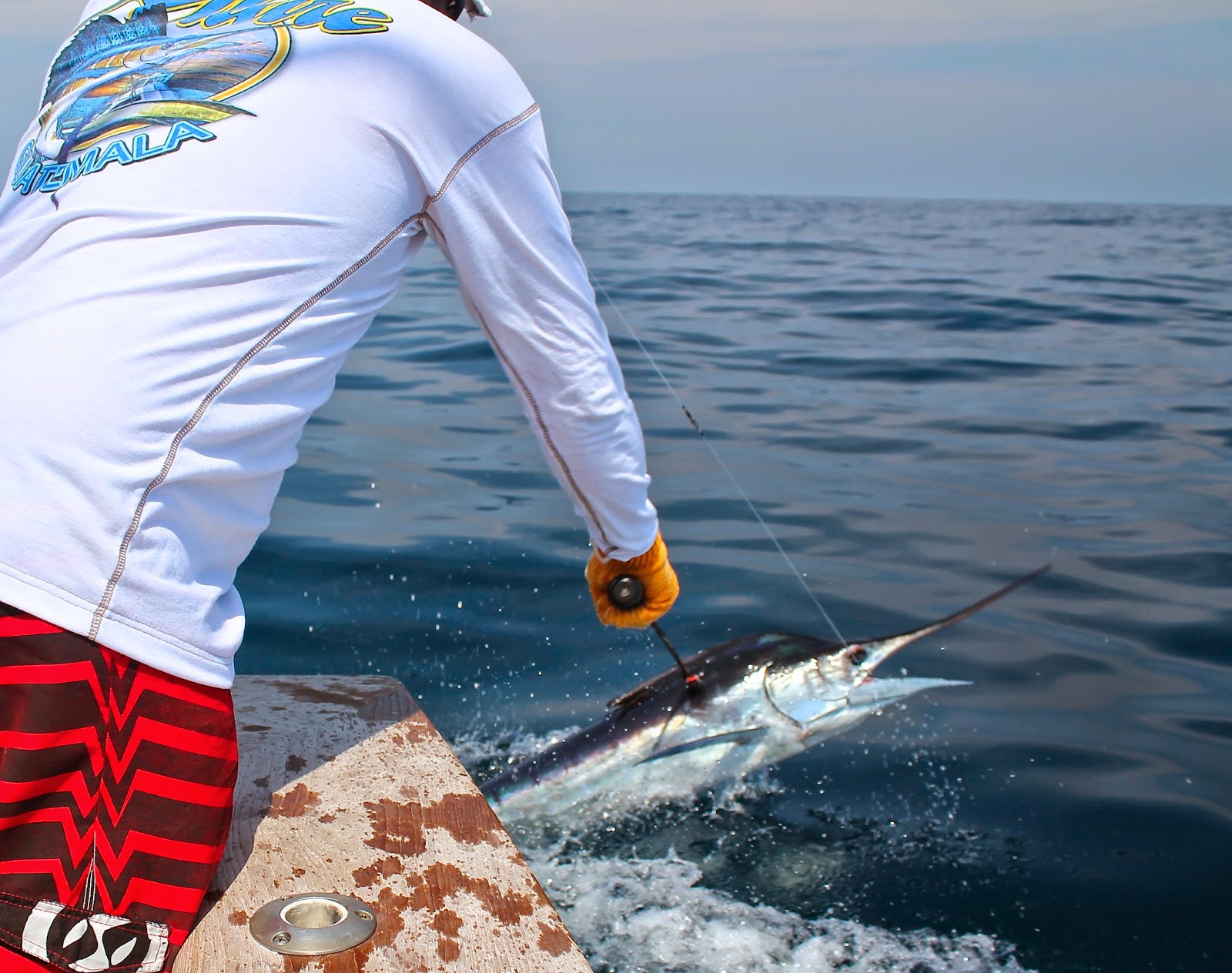 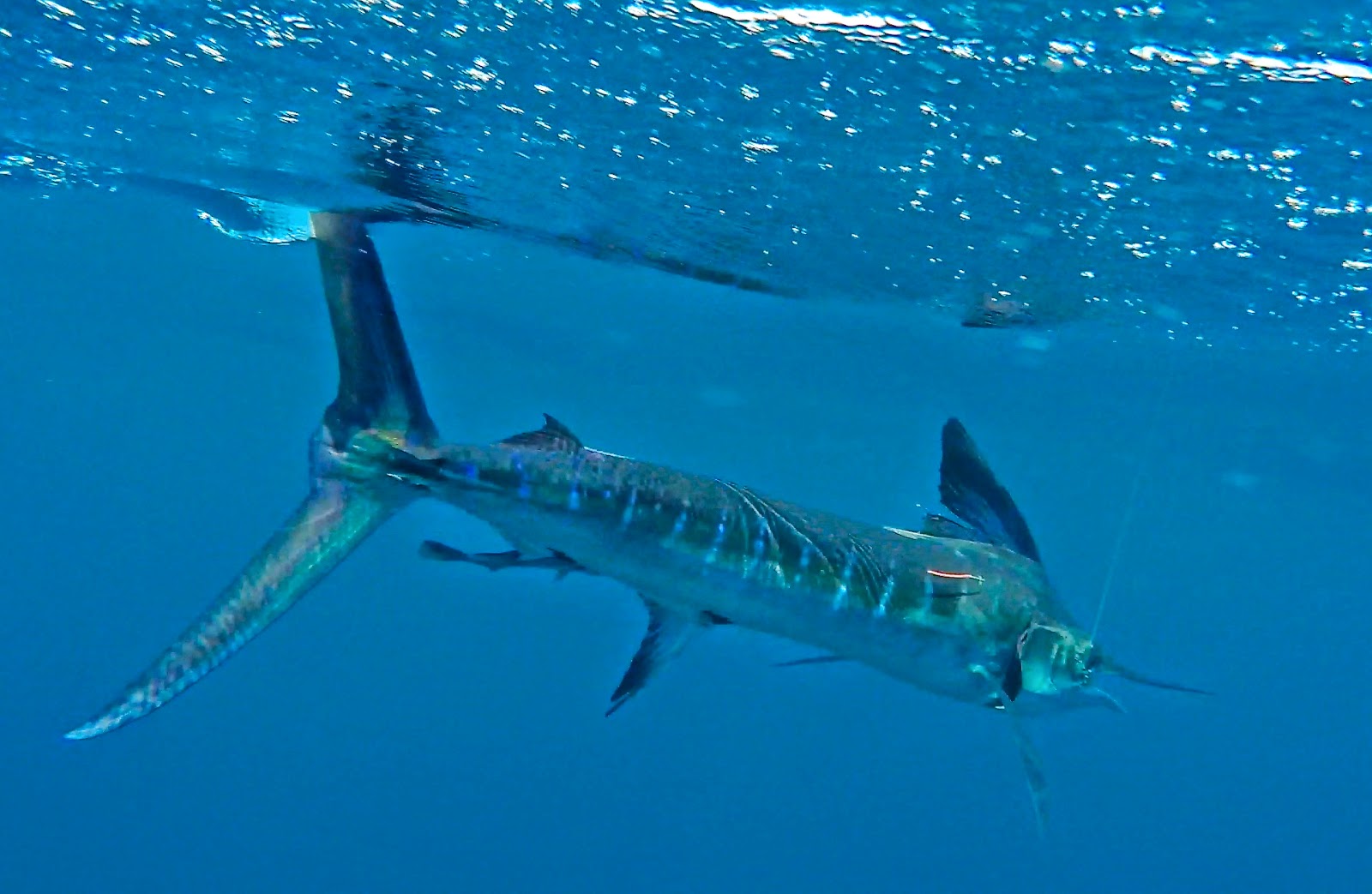 Before release.
Hoping to see these guys back down here before too long for a bit longer next time!
Very good fishing for our Spring Breakers through March 18th, and the fishing held for our groups that fished from here on in…..more reports to follow….