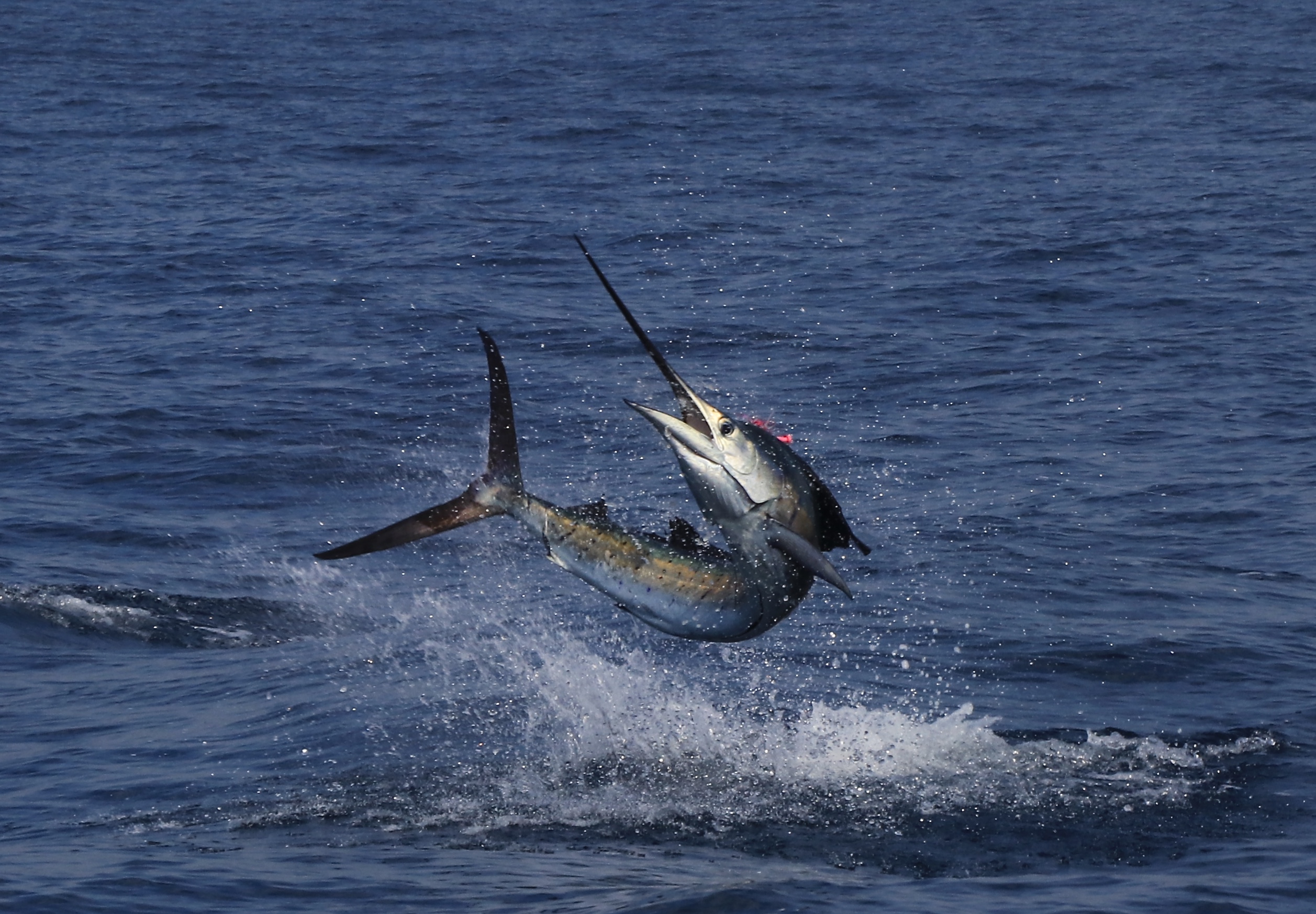 May 1-4th Cam Sigler hosted the 6 man group from North Coast Electric down from Seattle for 4 days of fishing on the fly. The group split their time between Allure II and Decisive experiencing some good fishing releasing 2 blue marlin on conventional tackle, 21 sailfish on the fly and boating mahi mahi and yellowfin tuna on the fly. 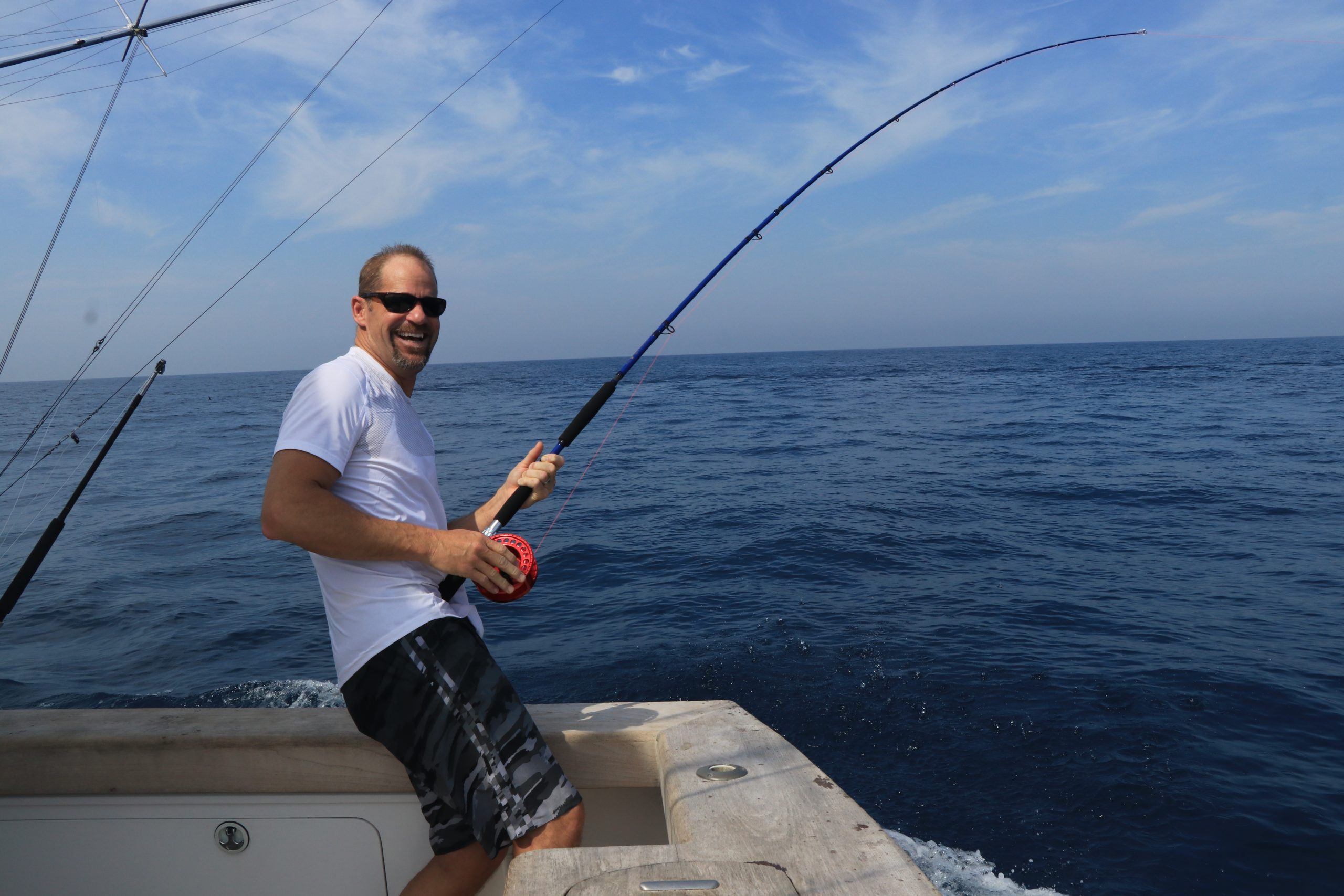 Rob with a tuna on the fly, awesome bite, no prop wash with the boat in neutral. 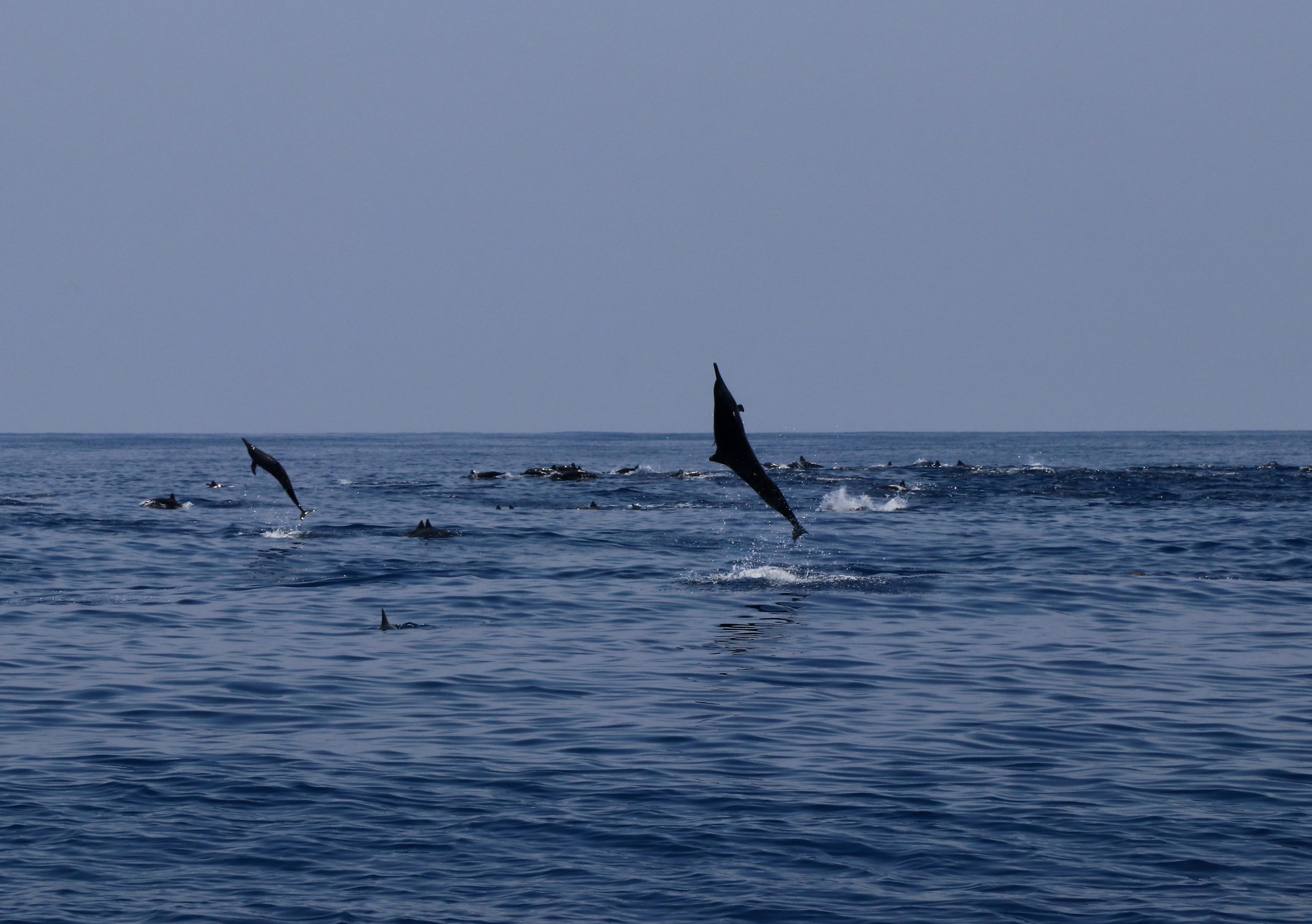 Tunas on the spinner porpoise got the guys a few on the fly. 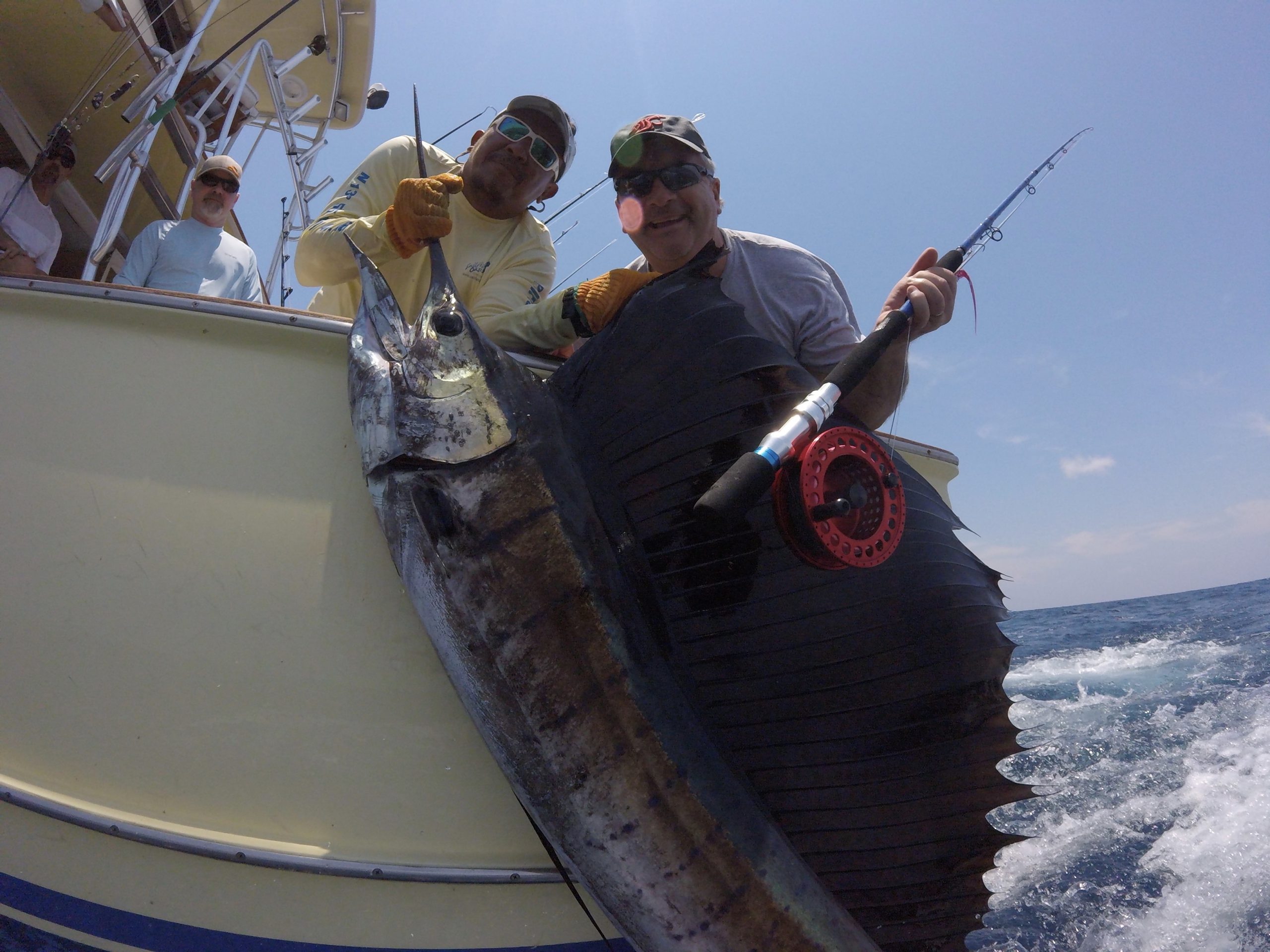 A nice large sail for Rob as well! 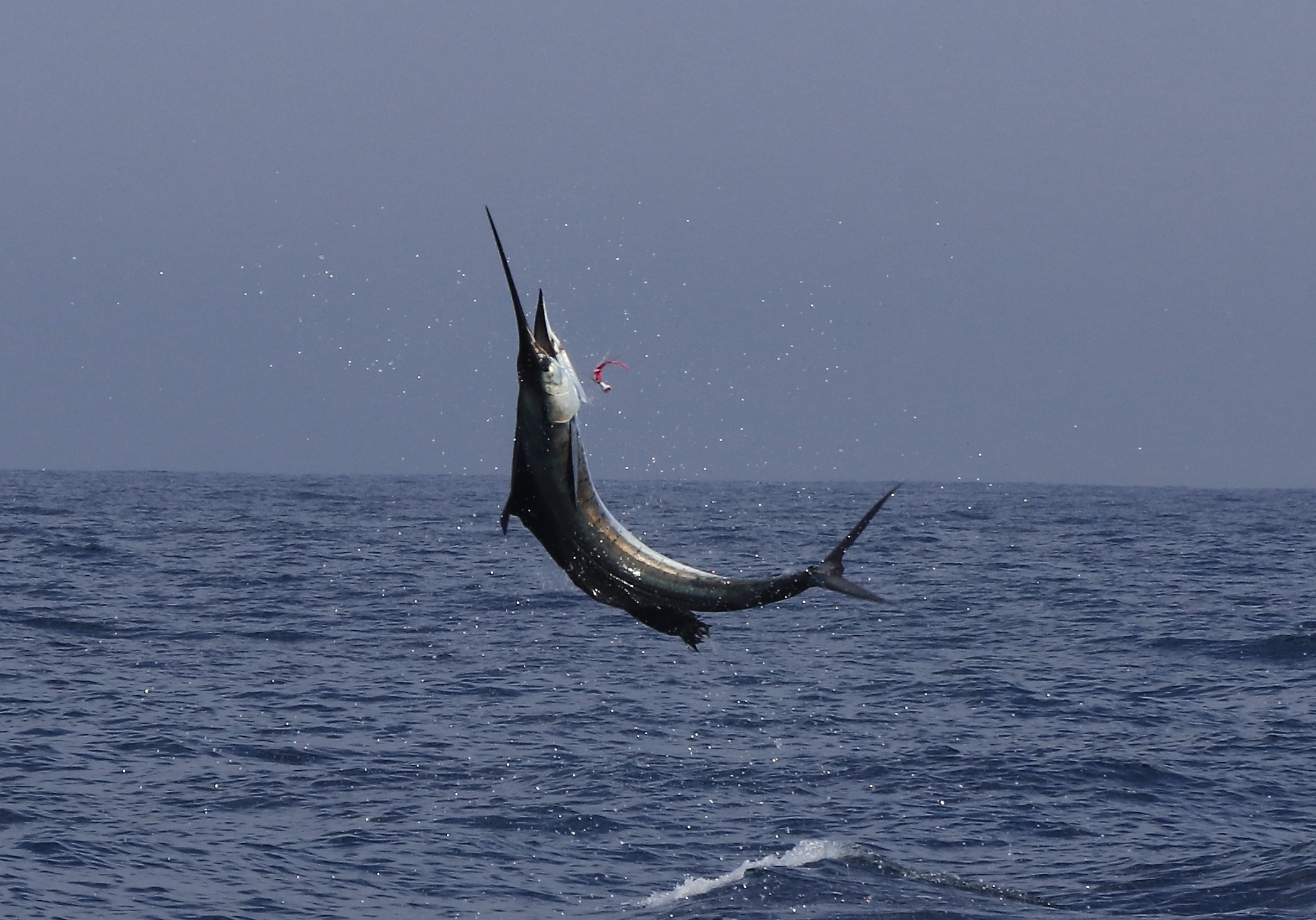 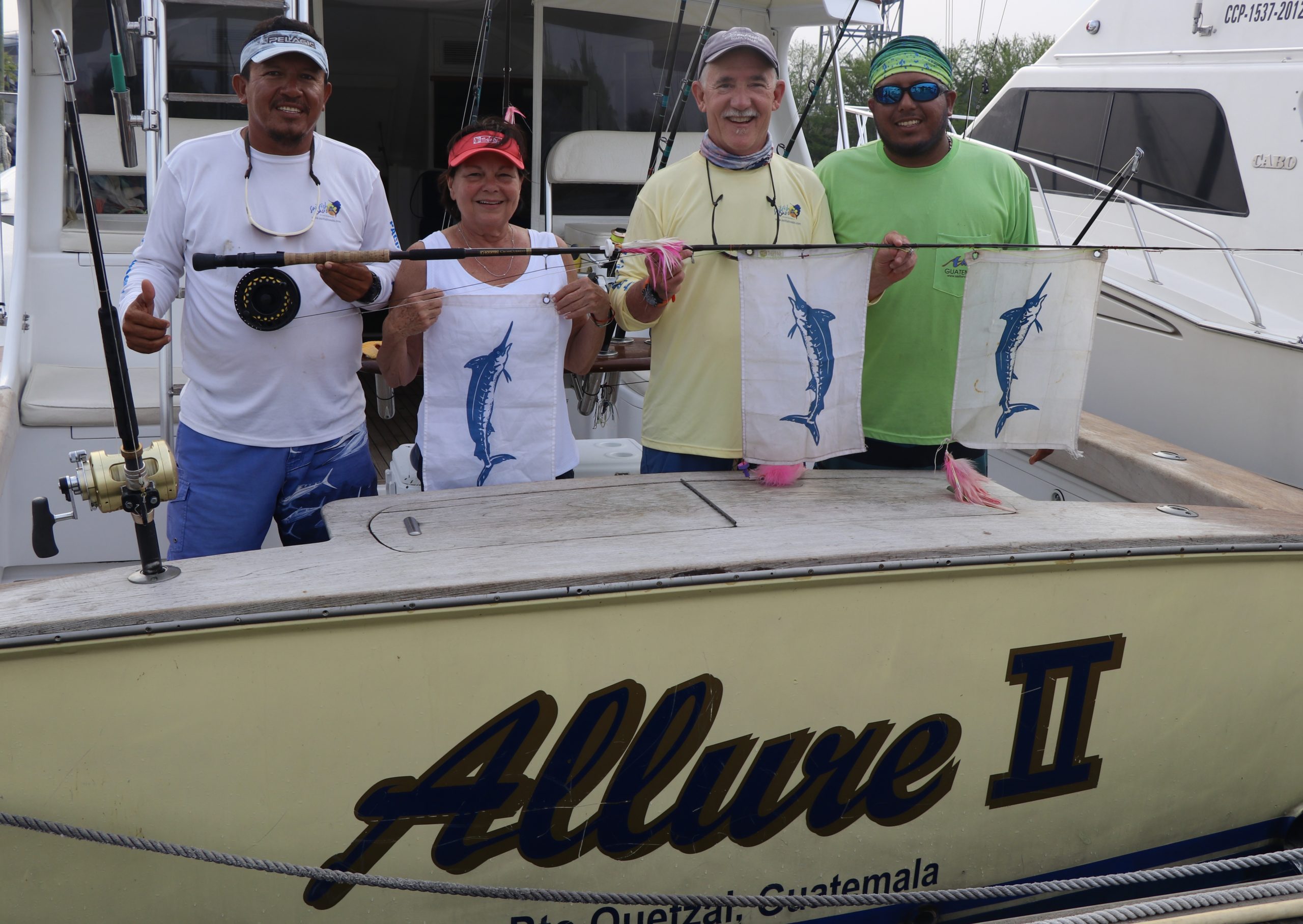 April 29 & 30th great to see Jay and Ira back down here in Guatemala for their second trip since early February. Jay had a taste on the fly on his last trip and the goal was blue marlin on the long wand this time around…. 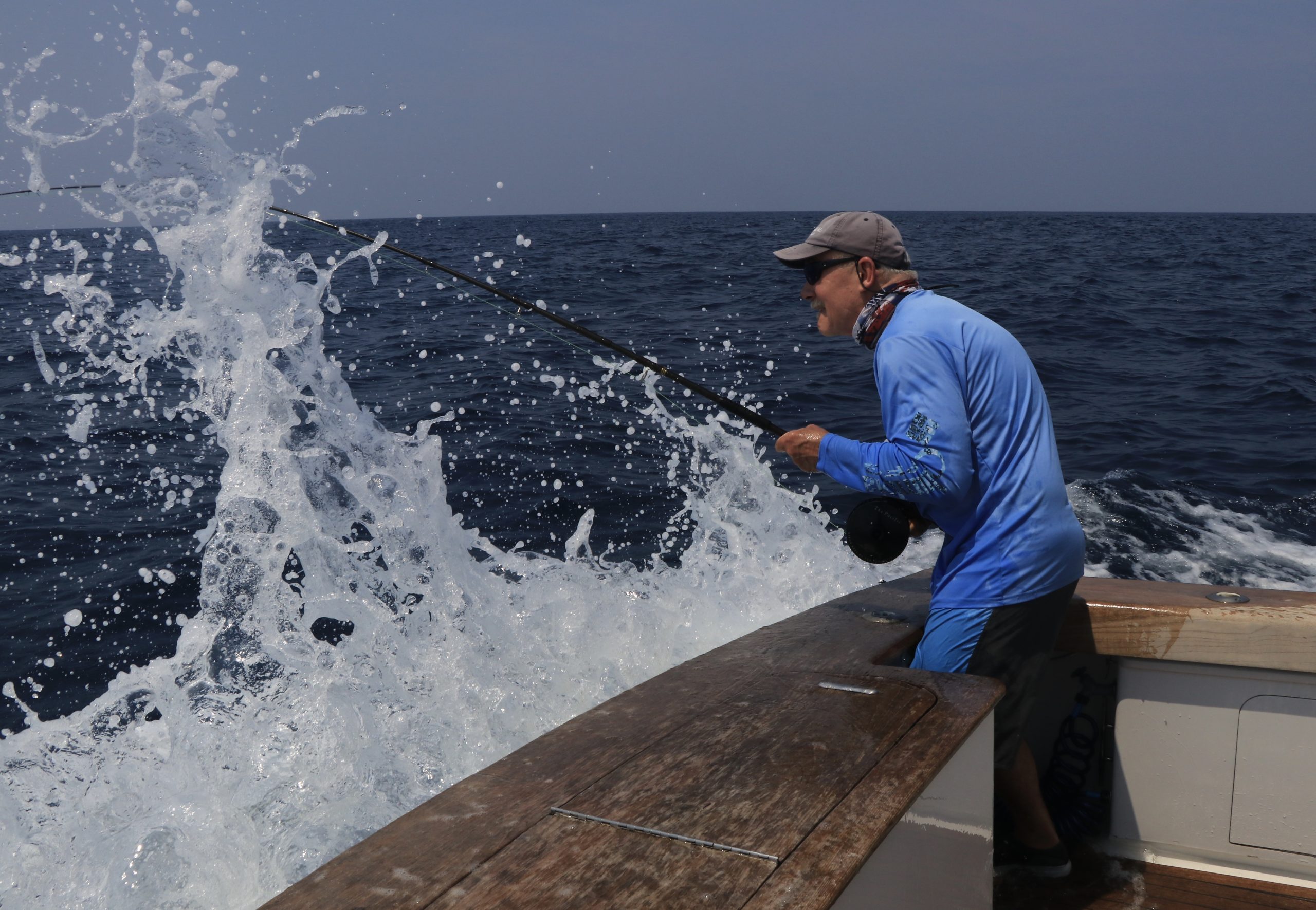 Late in the afternoon he had his shot and did everything right on a 220lb blue that went ballistic. Still never ceases to amaze to see 12″ of 100lb shock attached to 20″ of 20lb class tippet survive a crazy series of jumps with the added line drag through the water….. 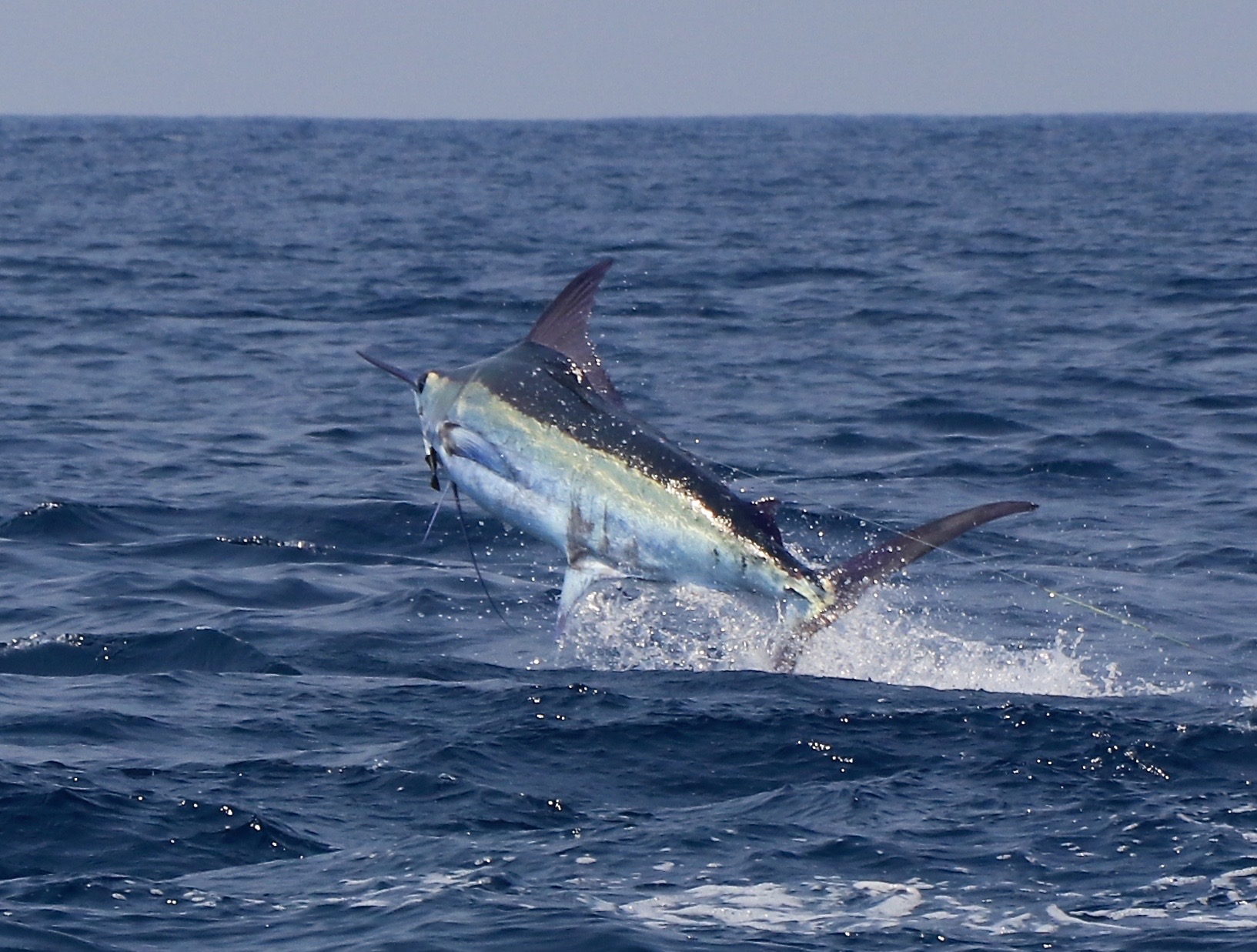 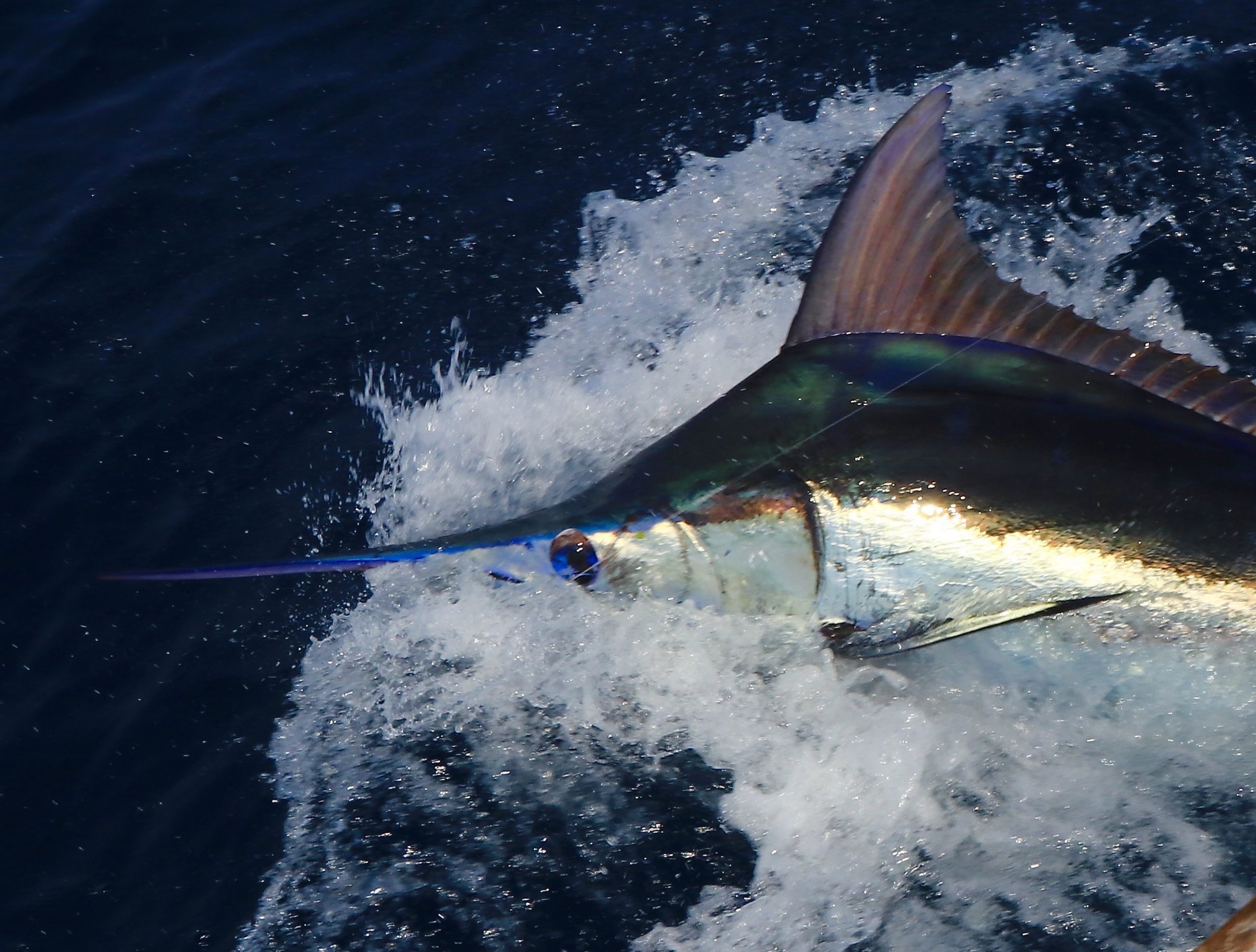 And not more than 20 mins later we had another one on, this time a nice fish in the 300lb class released on the 50lb standup…. 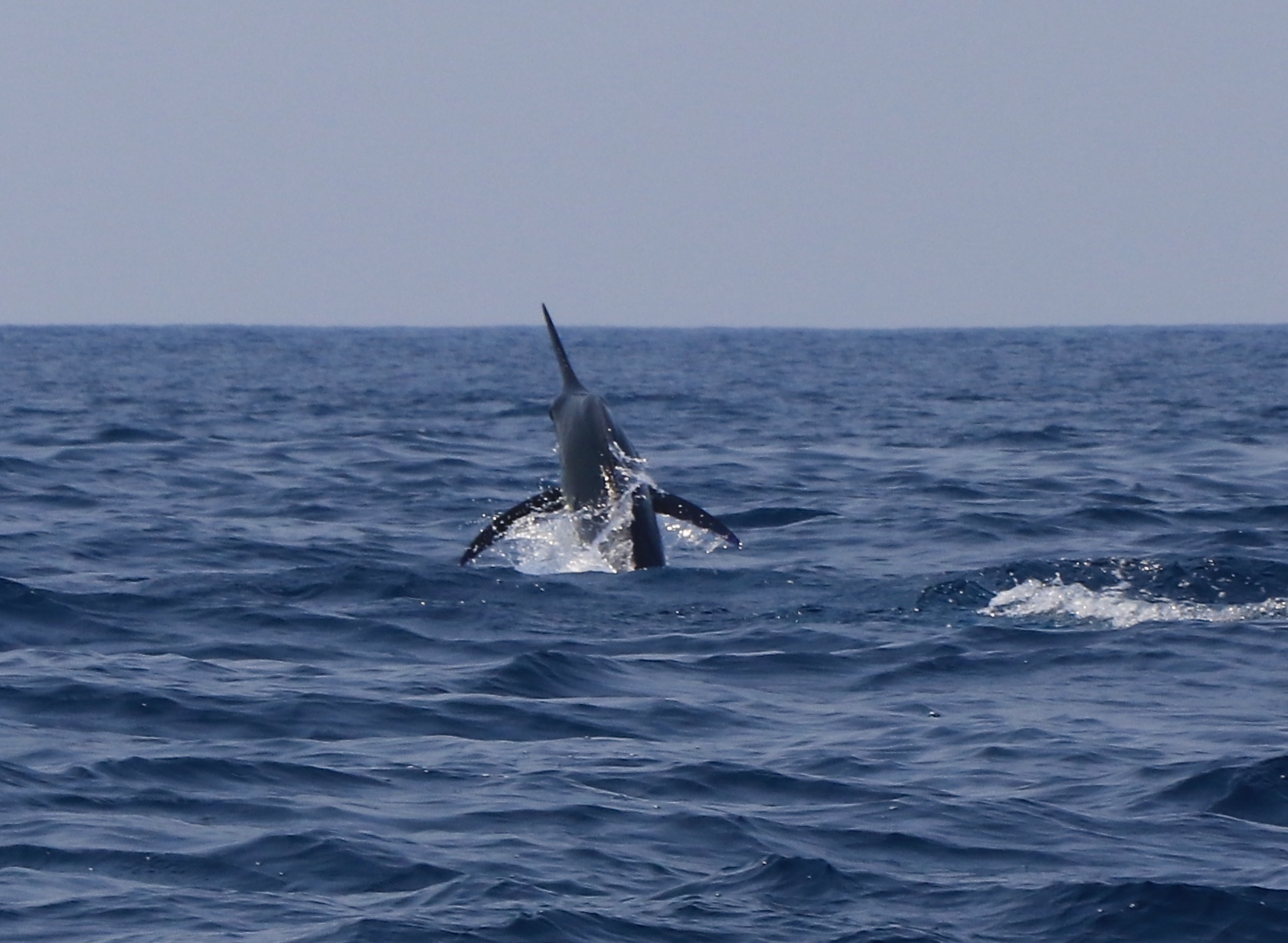 Next day we were back out there and soon after boating a 35lb tuna off a small group of spinners we teased on another hot blue, this time a perfect sized fish in the 130-140lb class that went down and dirty and after a tough 55 min scrap Jay got the release. 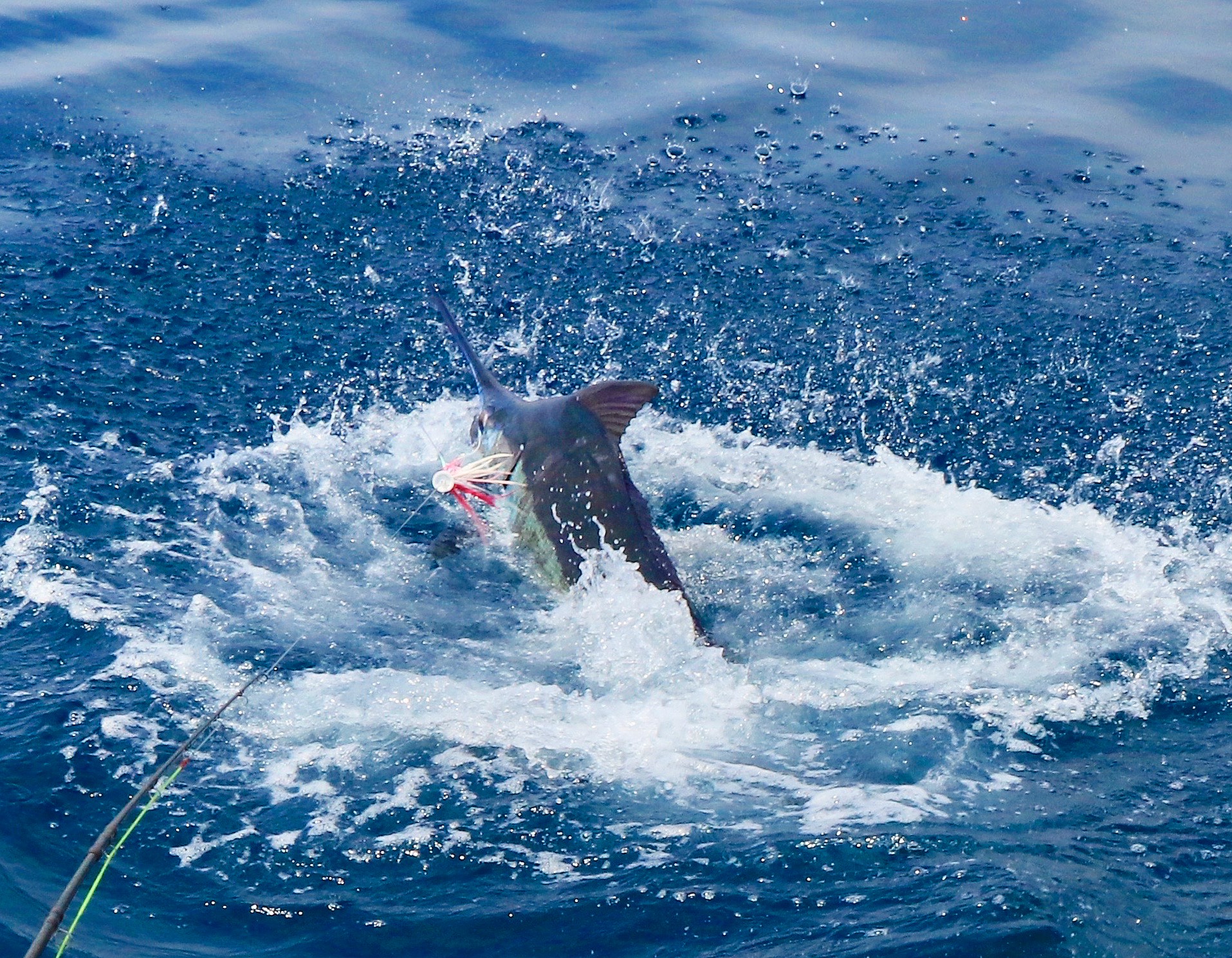 Got the fly back, quick pic and a healthy release. There are not too many anglers outs there that have gone 2 from 2 on blue marlin on the fly on their first attempt……Nice going Jay and Ira!! 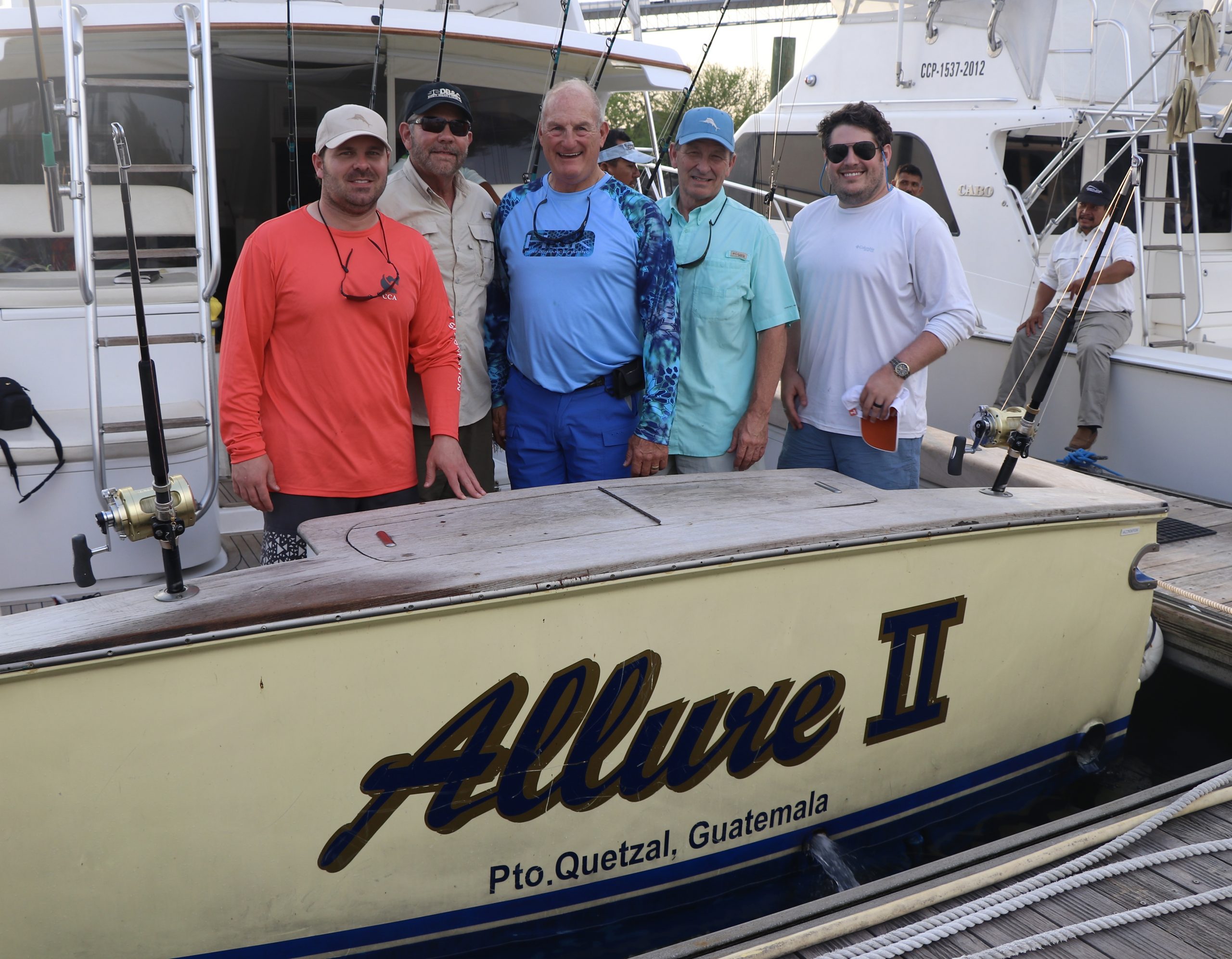 Crayden and Kelly with Erwin and John and Matt Merck 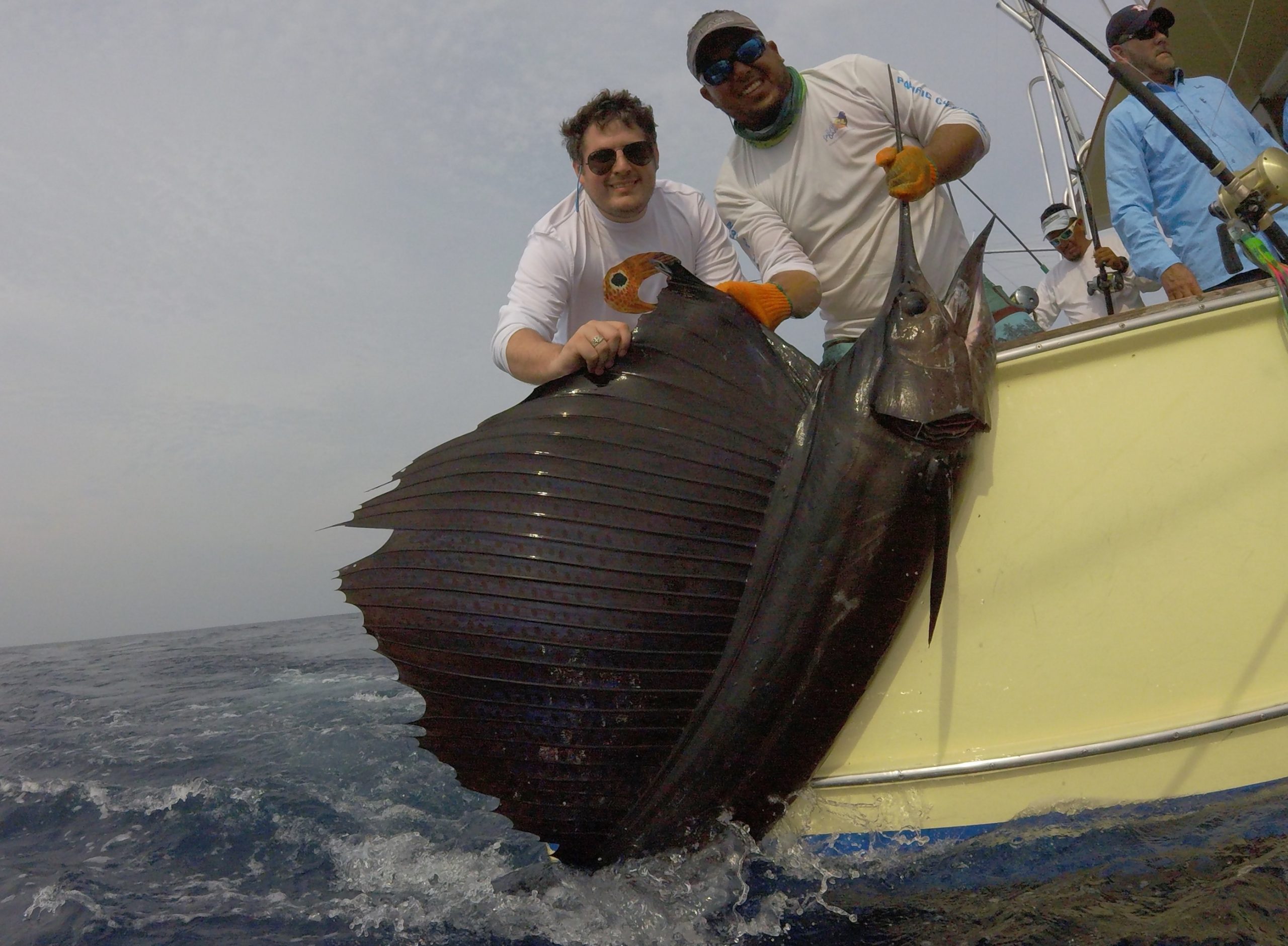 Over their 2 days of fishing we boated a bunch of yellowfin tunas, plenty of mahi’s including this big bull for Crayden… 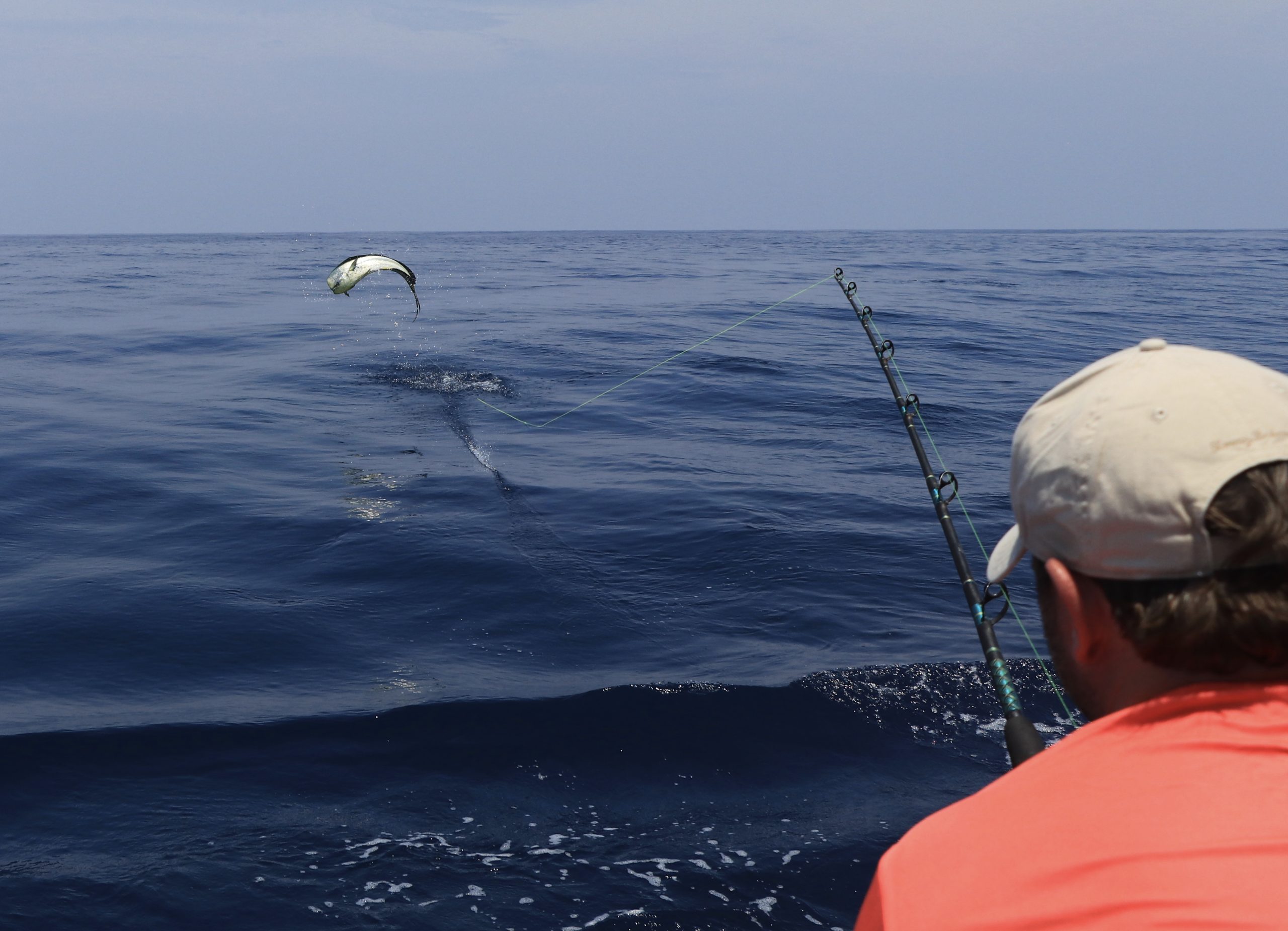 A little slow on the sailfish out there though they released 9 from 17 bites. 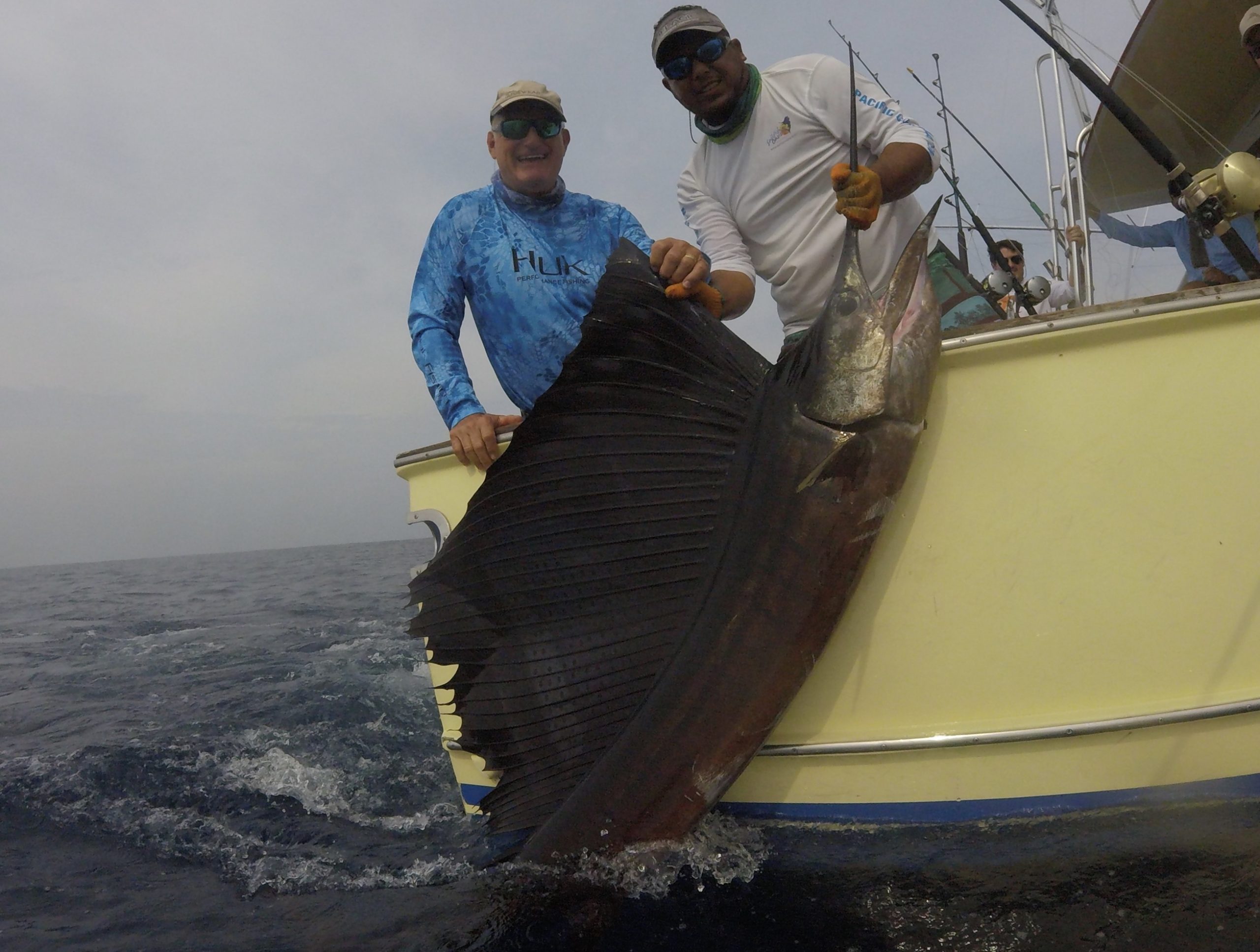 Good times with a great group of guys. 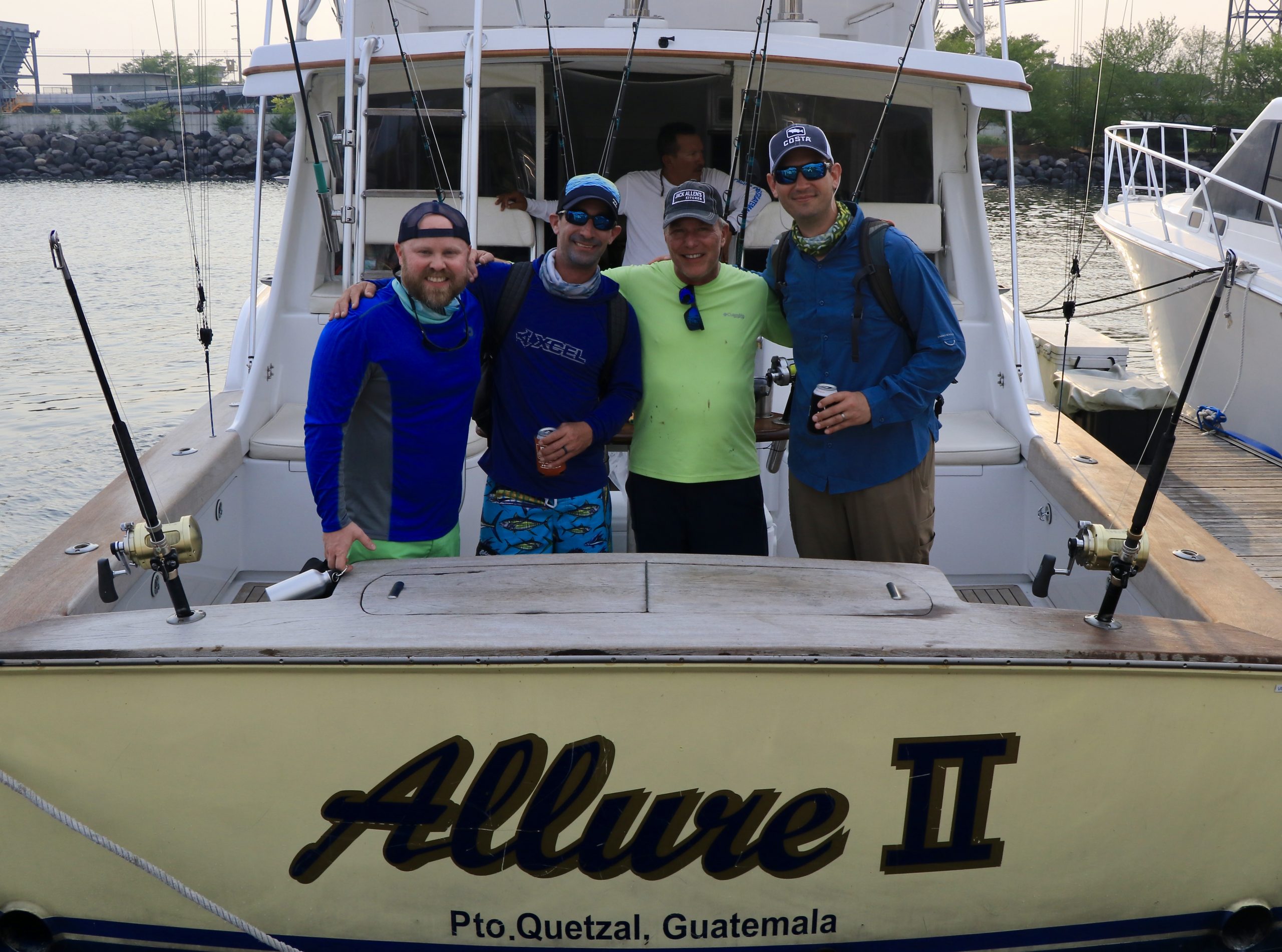 April 20-21 from Austin, Texas it was great to catch up with Matt again for the first time in a few years, bringing clients Tom, Josh and David. 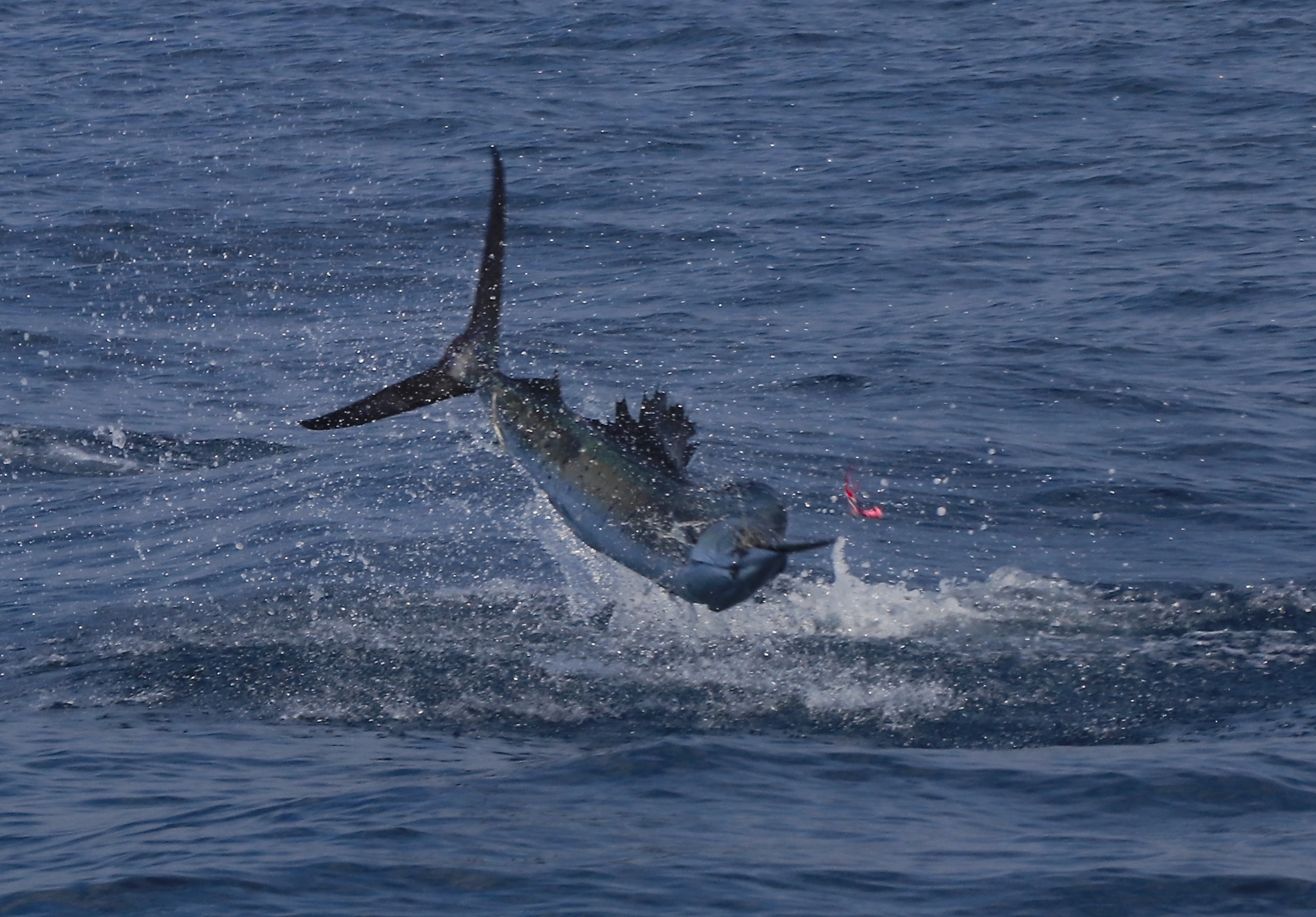 Fishing on Allure II and the Capt Hook they boated a bunch of mahi mahi and released 43 sailfish over their 2 days on the water. We also raised a blue that didn’t bite…Good fishing. 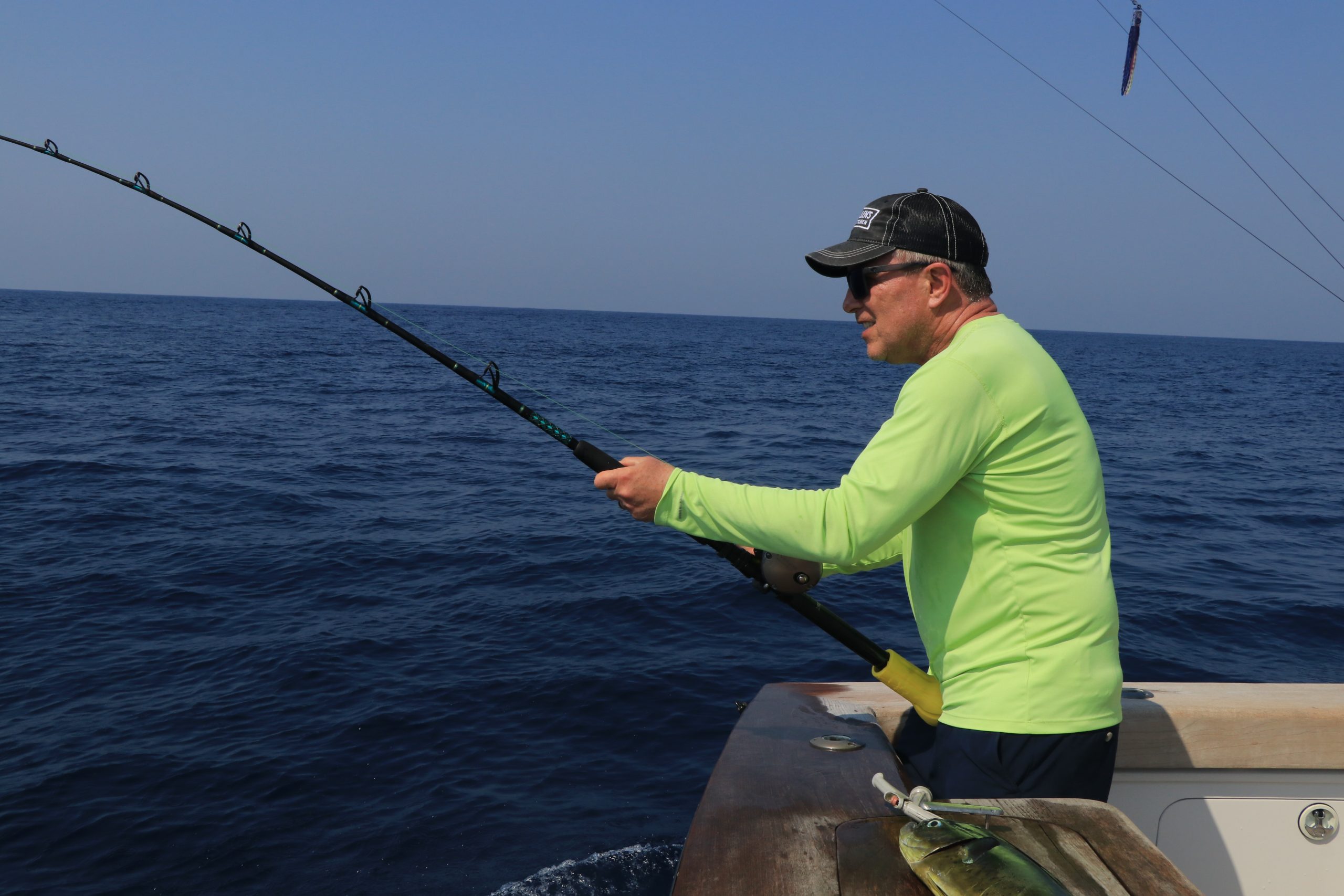 Tom on one of many for his trip down here. 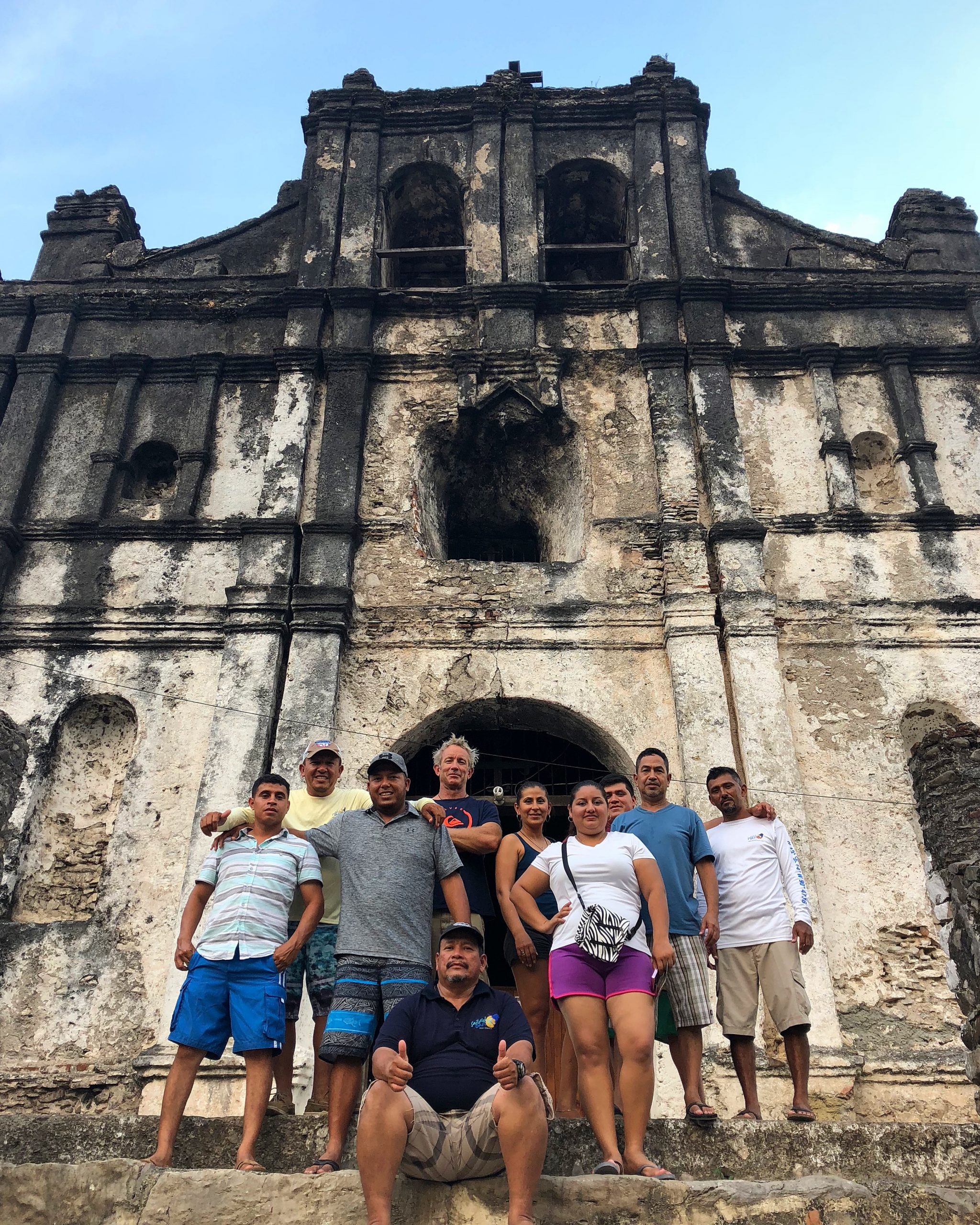 May 14-17th we took the Oasis team on an trip into the Guatemalan interior, showing the coastal crew the beauty of their country. An end of the busy season trip with plenty of laughs, a night in Lanquin and then on to the spectacular Semuc Champey: 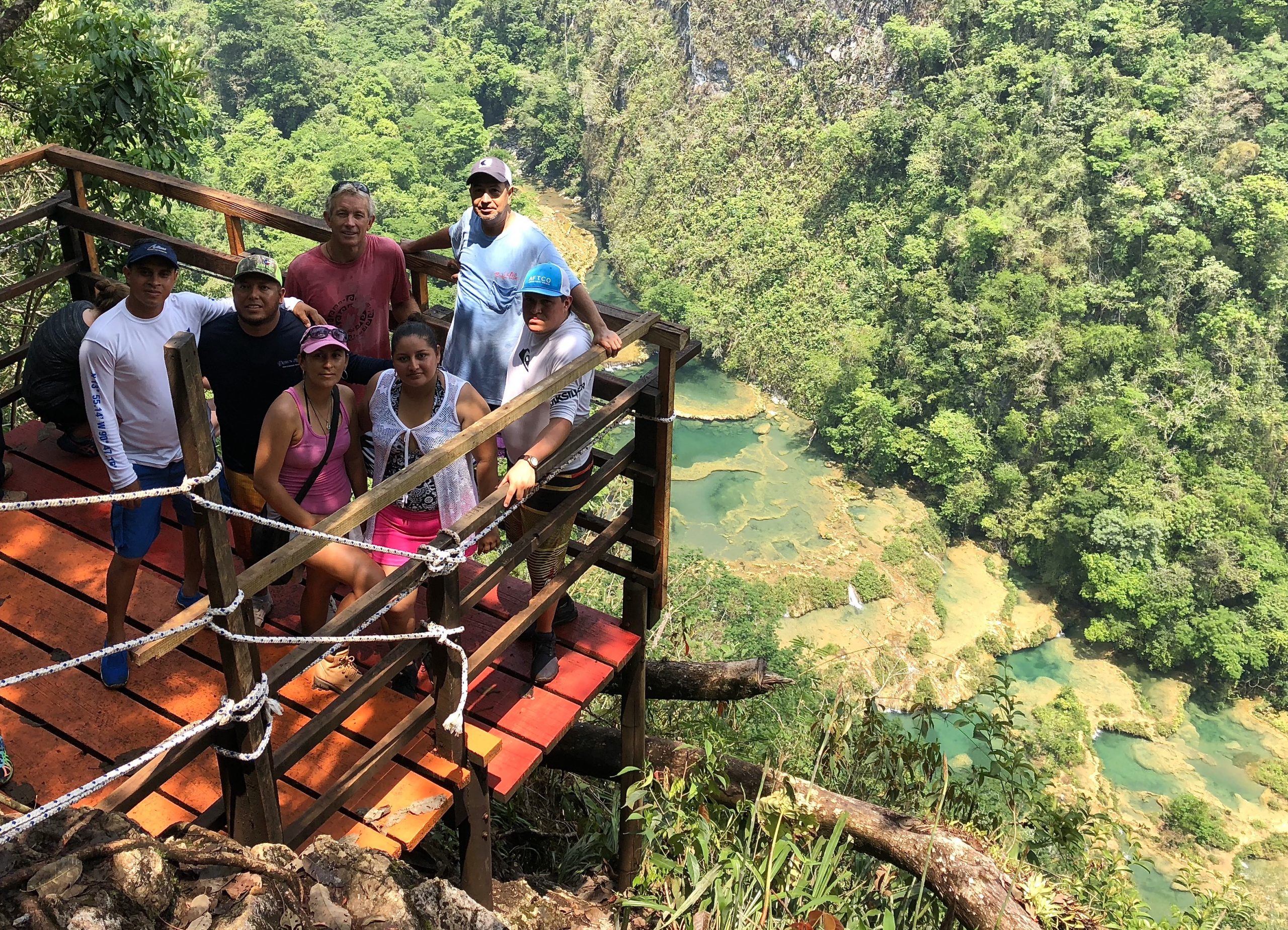 Finishing up with some caving in Coban…. 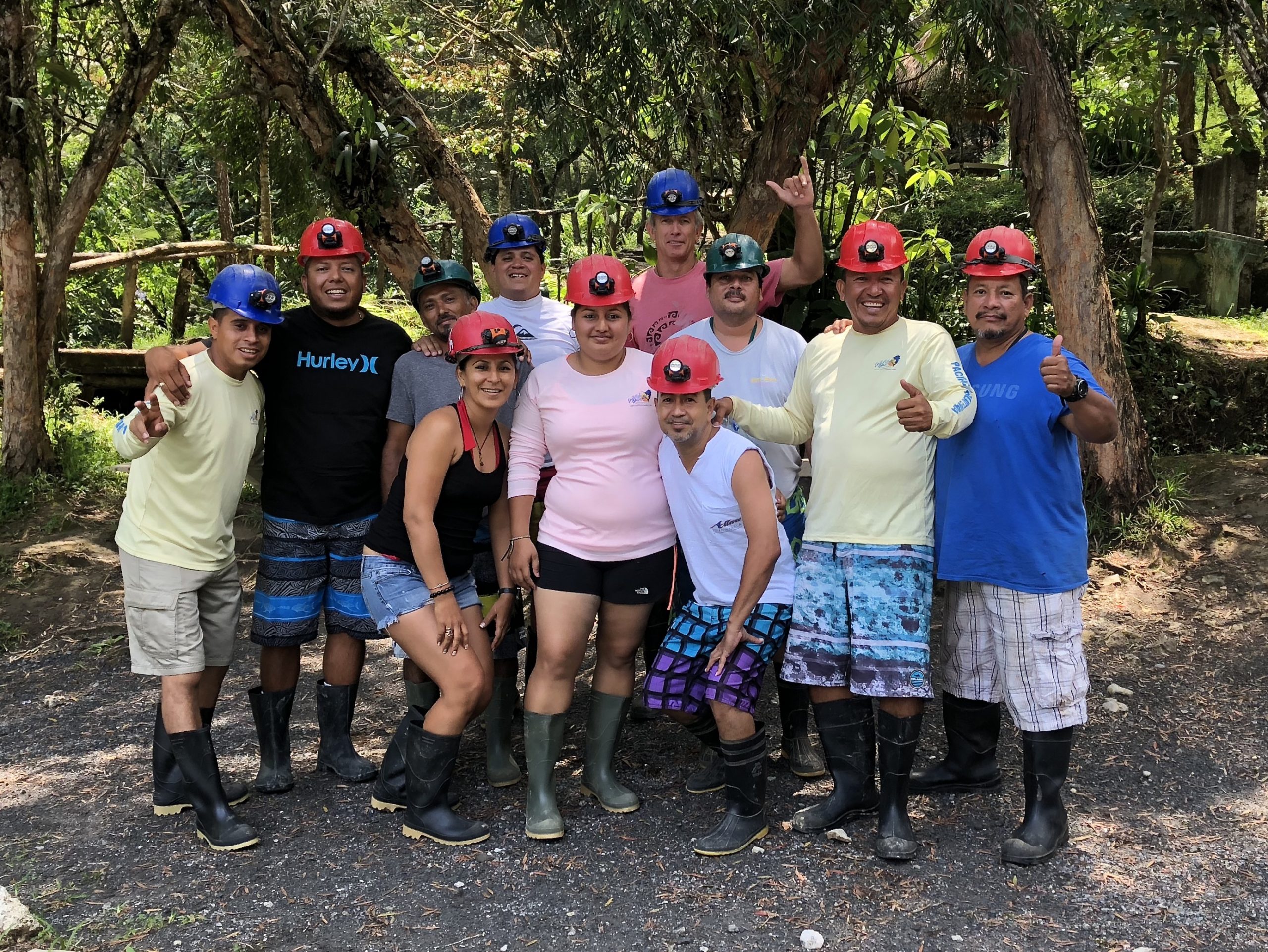 Good times with this awesome group we have working with us. Guatemala is a beautiful country and has much more to offer than just incredible fishing.

The blue marlin have turned up the past few weeks with some banner days for the crews out there. The sailfish are still biting and the mahi mahi and tunas are also out there in force. Summer time is the best time down here in Guatemala, plenty of variety and a genuine blue marlin bite . We are back fishing come June 1st and can’t wait to get back amongst it. There are a few openings with June 15-21st available and then again August 12 through 19th. October has been the best month for blue marlin the past several years with sailfish in the mix also, so if you want to get in on it, secure a your dates. Contact: