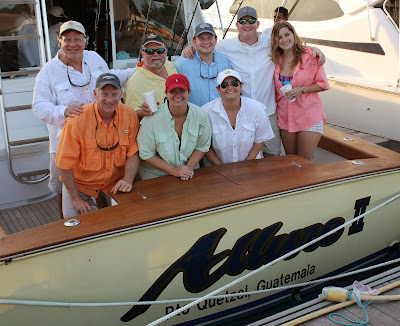 We hosted this father and daughter/son group for a couple of great days here in Guatemala on ALLURE and ALLURE II. Brad and Michael have been down before and introduced our fishery to their sons and daughters as well as Brad’s niece Kaitlin. The group had a blast here catching sailfish and mahi mahi, including a couple of triple headers and one quintuplet hook up on the last day. One of the fish ‘chewed’ through the leader though we landed the other 4 sails. As well as this on ALLURE they had 2 blue marlin bites with a bit of bad luck, one getting bill wrapped and the other pulling the hook. Still an awesome trip for the group form Houston releasing 41 sails form 52 bites and boating several nice mahi’s. 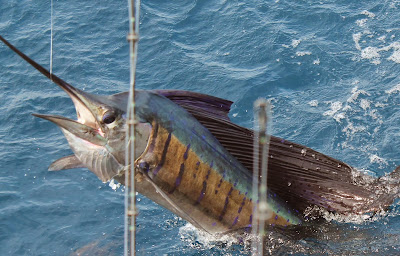 Great boat-side shot
The crew had a blast down at the lodge with Nick and the staff and we had some wonderful comments:
Absolutely amazing trip! The food was incredible, drinks were amazing and the fishing even better!!
John D’Angelo 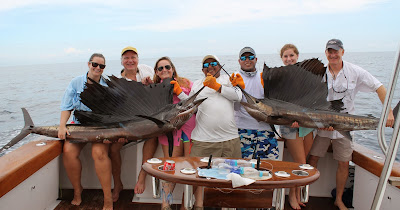 I just wanted to send a quick note to thank you all for the past weekend.  Everyone in the group had a great time and told me that it was well above any of their expectations.  The staff at the lodge were terrific as usual and really helped us out at the pizza party for the local school. Thanks again for a great time. Cheers and tight lines!
Brad Kangieser 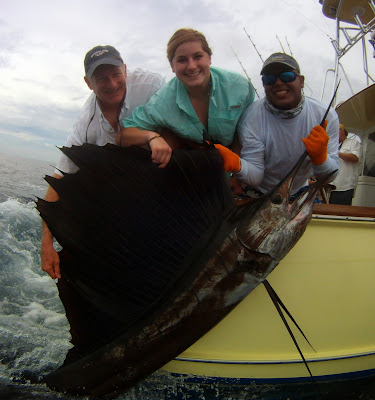 MONDAY 11th NOVEMBER
ALLURE II took out close friends Stephanie Choate and Lizzie ………… for a one day pre-tourney fish. The bite was still on at around the 40NM mark and girls fished well, mixing it up between the fly and conventional they released 18 on the baits and a couple on the fly. Both experienced fishos it was their first time on the fly and they both got into em, releasing one each. Congrats and nice going!!
The fishing remained very good during the week for the Guatemalan International Tournament with over 900 billfish releases over 4 days through Saturday for the 15 boats participating. November proving once again to be a great month here in Guatemala.

We are out again tomorrow, more reports to come. Still openings available in December and even a few prime dates in January and February….