Chuck Miller with his blue marlin of around 300lb’s tagged and released on the 50lb stand-up. The blue marlin bite has been a bit slow till now though we broke one off on Saturday on the 30lb and there was another caught that day with a few more being seen among the fleet since then. We’re hoping to start seeing a few more from here on in…
Today we fished with Chuck Miller, Mike Treet, Max McLain and Ken Victorick from Midland, Texas. The sail bite was a little slow and we started to the east of where the few sails were being picked up. Chuck started the day with this nice 30lb mahi…. 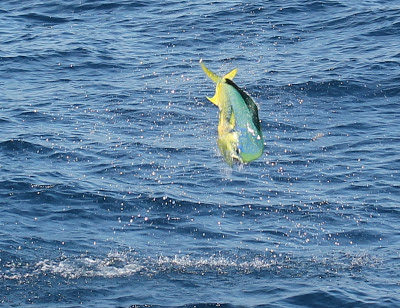 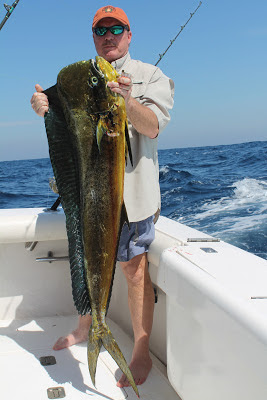 And ended the day with his blue marlin, in between we raised 5 sailfish and released 2 from 4 bites. We are back out again tomorrow with the guys and hope to have some better sail action….

March 3rd-4th we fished with the Steve Scribner group…..

On our first day out we felt the effect of a large cold front that had rolled down from the US, this was a pretty nasty one with 8ft seas and the occasional 9-10ft waves coming through. Not that much fun to be in, short sharp waves so we pulled the pin at around 1030 and tried a bit of inshore fishing. The next day out, Monday the 4th was a bit better and we worked hard to release 4 sailfish from 6 bites. The guys had a great time down here despite the tough conditions and relatively slow fishing…..

February 28th through March 2nd we welcomed back to Guatemala the Chris Adams group, it had been 4 years since we last fished with them so it was great to catch up again.

In the first 2 days we had great weather, flat seas and good fishing with 33 sails raised 29 bites and 20 sails released. 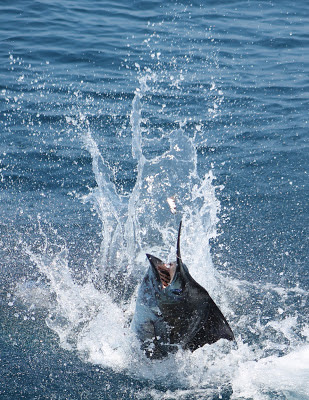 Our last day out Dean, Mary Hope, Faith and Mitch headed up to Antigua for the day while Andy and son-in-law Chris went offshore, the start of the cold front saw a confused sea and the sail bite that we were on the day before dried up, we ended up with 2 sailfish released from 3 bites and Chris had on a blue marlin of around 150lb’s on the 30lb that went crazy on us, after several jumps the fish did a quick circle and cut through the main-line, 30lb test. Unlucky for Chris though that;s fishing…..

We are expecting things to pick up once the weather gets back to normal and the seas get a chance to lay down. With the stiff ENE winds a fair amount of top warmer, blue water was blown away. We are fishing everyday through next week so more reports to follow. I’m picking April to be a great month as well, we have openings…. 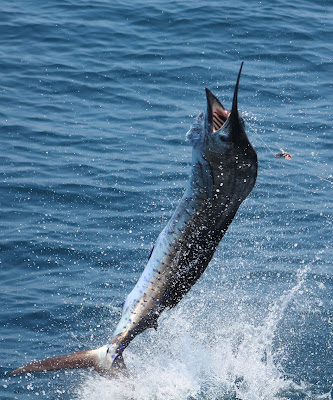