We just finished a 16 day straight run from April 3rd through the 19th. Overall it has been very good fishing, the best day being 53 releases from 83 sailfish bites, plenty of tunas out wide with mahi’s and the odd blue marlin in the spread to keep you on your toes…..Good times. We started the month with the Zingula group… 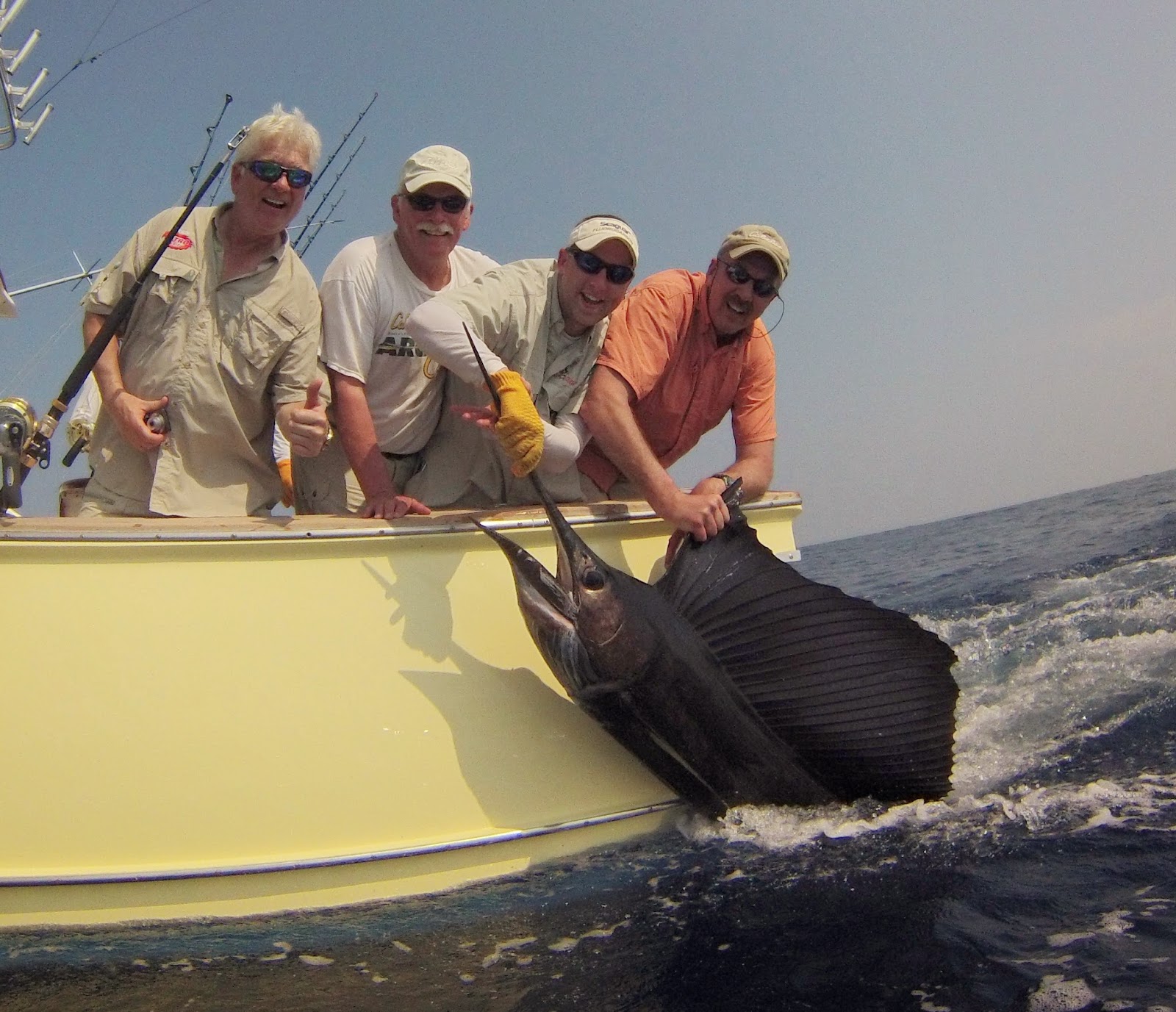 Paul Sokol, Hollis Perkins, Jon Sokol and Doug Zingula.
April 4th through 6th we welcomed back Doug Zingula for his second trip with us this season along with the crew who we last fished a couple of seasons ago as above, Paul and Jon Sokol and Hollis Perkins, all Guatemala regulars for many years now. First day out proved a little slow trying to find the remains of the eastern bite so we ran out wide to the west to the next day finding nice blue water and a good sailfish bite in the morning session. Things slowed midday though we finished strong with the guys hooking all their own fish going 19 from 32 bites. Our last day out back to the west slowed a little though still very good fishing with 10 from 17 bites and the last fish on the fly for Jon. From 6 raised the one we got teased in from a double header that came hot all the way with one biting the fly. Nice way to finish Jon! The guys finished up the trip with 34 releases from 58 bites, we’re looking forward to fishing them next year, they’re already planning a return trip which says it all…. 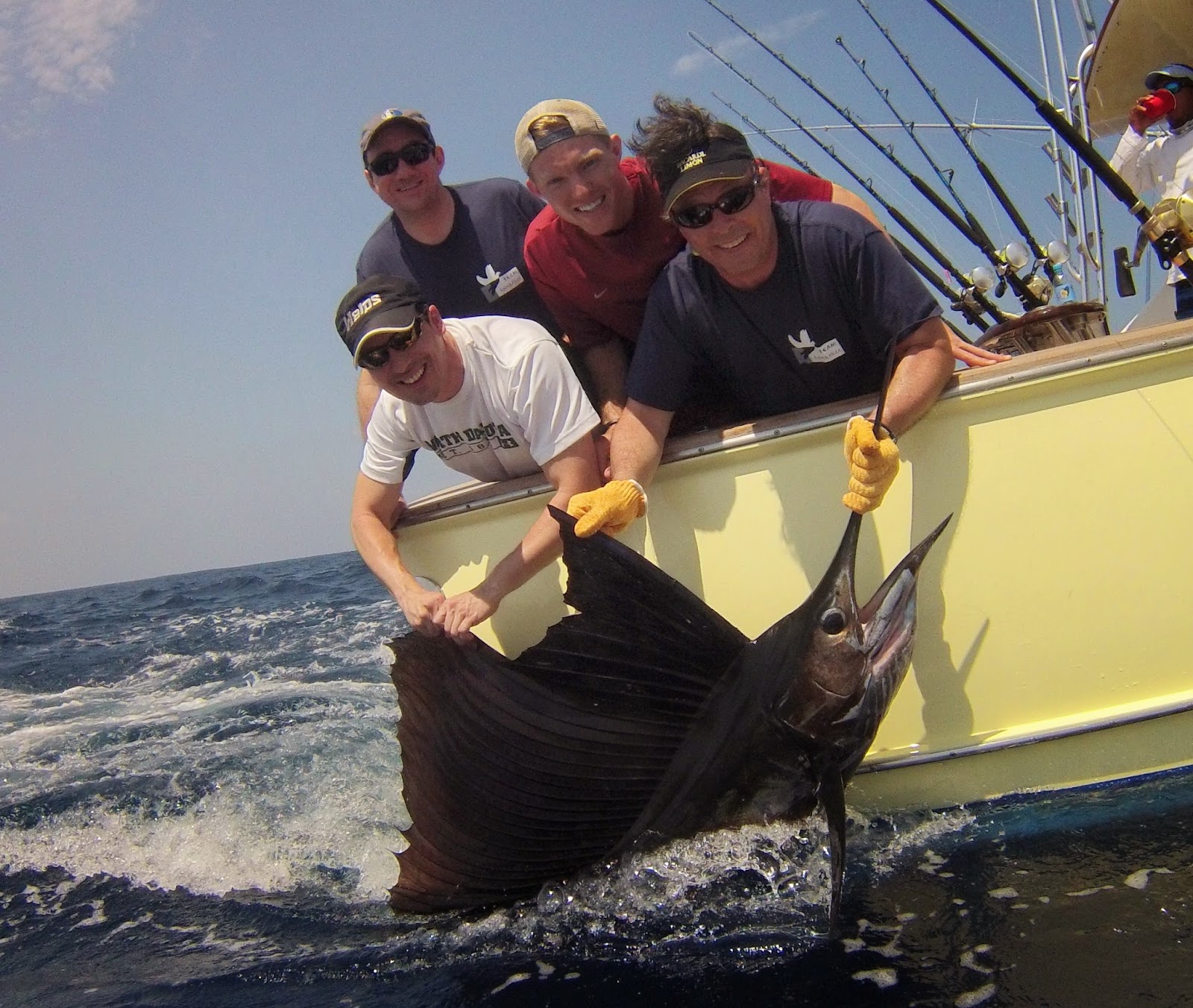 Luis Garcia, Jorge Corona, Clay Quinn and Hunter Bost
April 7th we hosted Hunter Bost and the above group of Dr’s who had been working the week in San Cristobal, Coban for Helps International. They were part of an overall group of around 50+ Dr’s who had flown down from the US with a large amount of medical supplies and performed over 100 operations. Great work for those in need, hats off to you. We took the guys out for a shortened day of fishing before the last night with their group in Antigua and we’re glad we got them into some with 20 sails raised and 10 releases from 18 bites. Also a couple of mahi’s for fresh fish tacos for lunch. A great day on the water, good on you Dr’s… 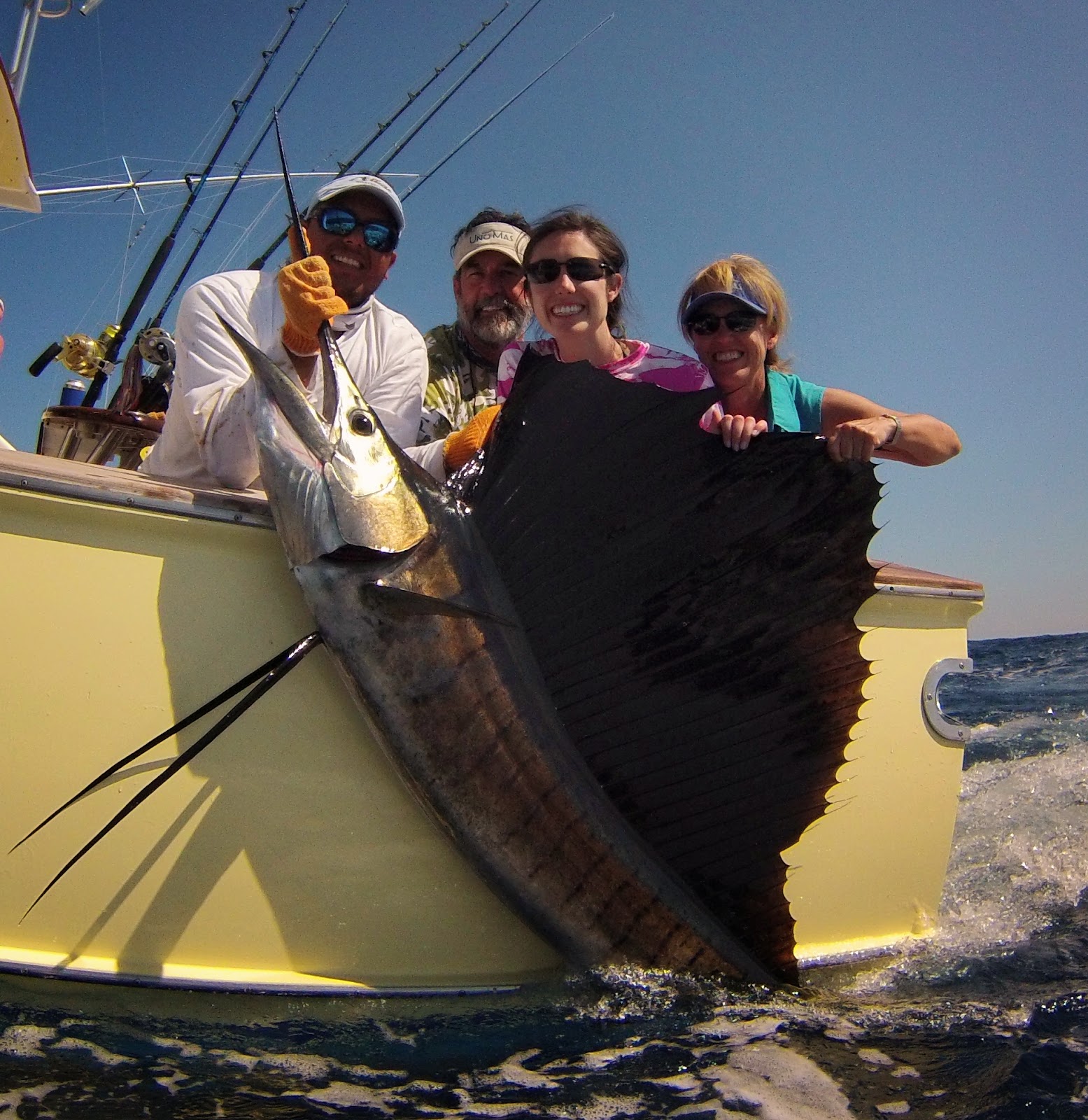 David, Laura and Dianne Fanta.
April 8th-10th, we welcomed in Guatemala first timers the Fanta family from Houston. First day out we chased the bite that we had been fishing, pushing off further we eventually caught up with it and had some good activity with 9 releases from 14 bites. The next day we had an unseasonably late front push through making conditions tough with a stiff  ENE wind blowing against a hard W current making very confused seas, rough and tough to get on the fish. We did have 8 bites for the day and were happy for it. Next day out the morning was back to same sea conditions and the green water had pushed down to the west. We did find a large group of spinners in the morning stacked with yellowfin tunas, David and Laura were keen to try the fly today and with the tunas attacking the teasers we had a fun morning casting to the tunas under the teasers from a stationary boat. Some incredible surface bites on the Cam Sigler popper fly and blistering runs giving the Sage 13 wt flyrod, and anglers a real workout. A good way to forget the conditions!! 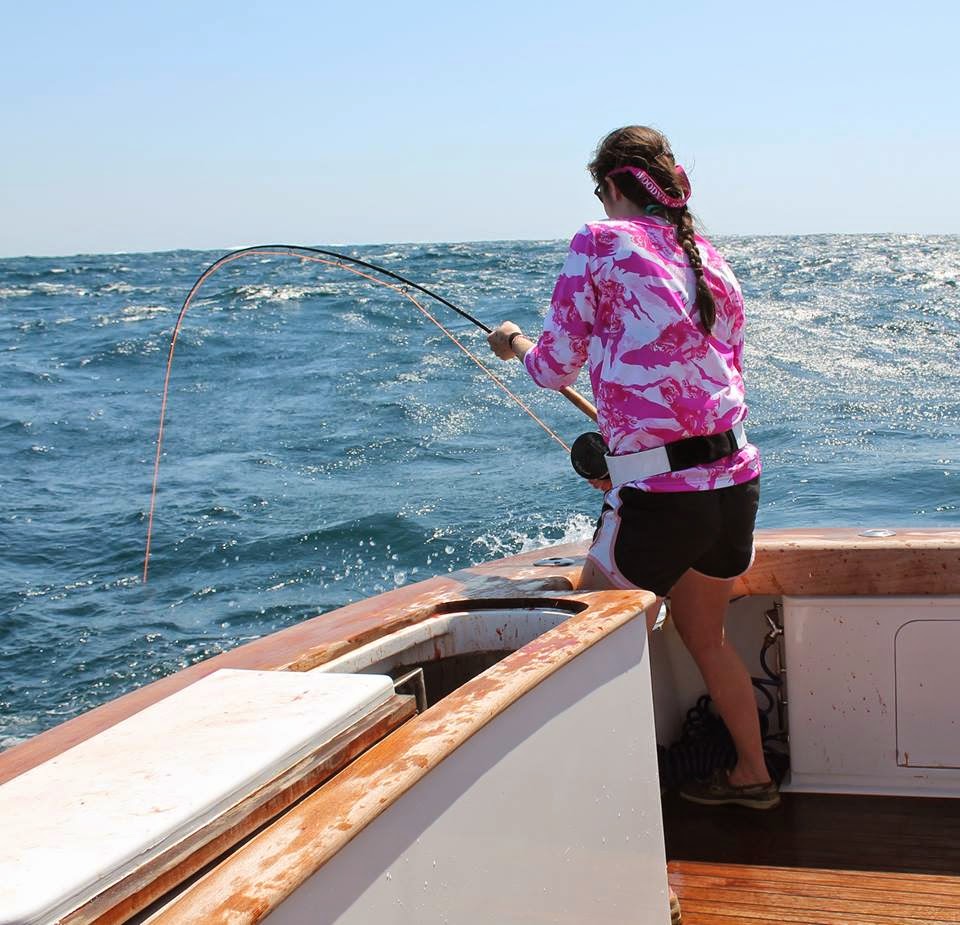 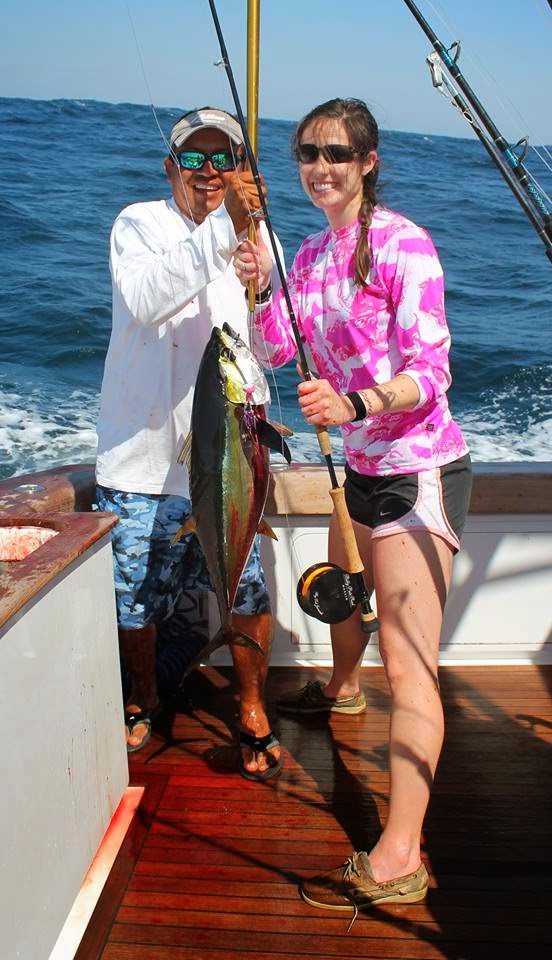 Laura putting the heat on and the results….nice tuna on the fly!!
The rest of the day we tried teasing the sails in to the fly though getting them to come in all the way was hard work. From the 10 sails raised 4 teased in all the way and 2 bit the fly and we were a little unlucky with them both jumping off throwing the hooks. We did get 2 on the bait for the day and for the trip we raised 33 sails and released 14 from 24 bites on conventional tackle with 8 tunas on the plugs with 3 on the fly. Plenty of fun and hope to see you guys back down here in ‘normal’ Guatemalan conditions!! 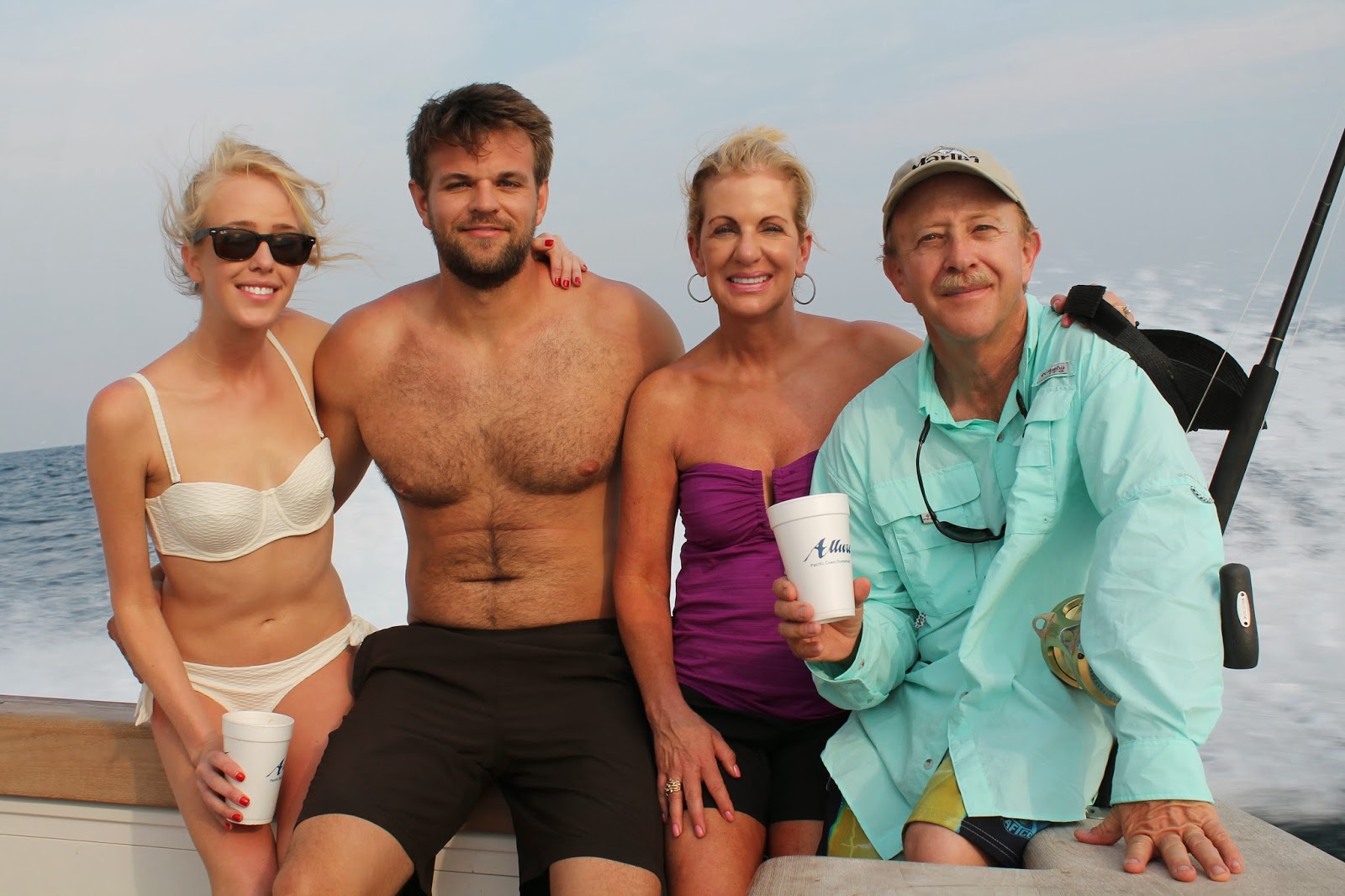 Annie Dishman, Briklynd Briggs with Cindy and Jamie Dishman
April 11th and 12th. Good to see Jamie, Cindy and Annie back down here this time introducing Briklynd to our Guatemalan fishery! What a difference a day makes….still a little left over wind in the morning though we were on the fish right away a few miles in from the edge to the west. As the day wore on the wind laid down and the fishing was very good till around 1300 when it kind of shut down. We raised 27 sails today with 12 from the 23 of them biting released, some very finiky bites it has to be said, a tough time making them stick!! The next day flat conditions and fish were playing the game a little better, 37 raised with 17 from 31 bites, a great day with steady action right through. 29 from 54 bites for the trip…Good fishing Team Dishman…. 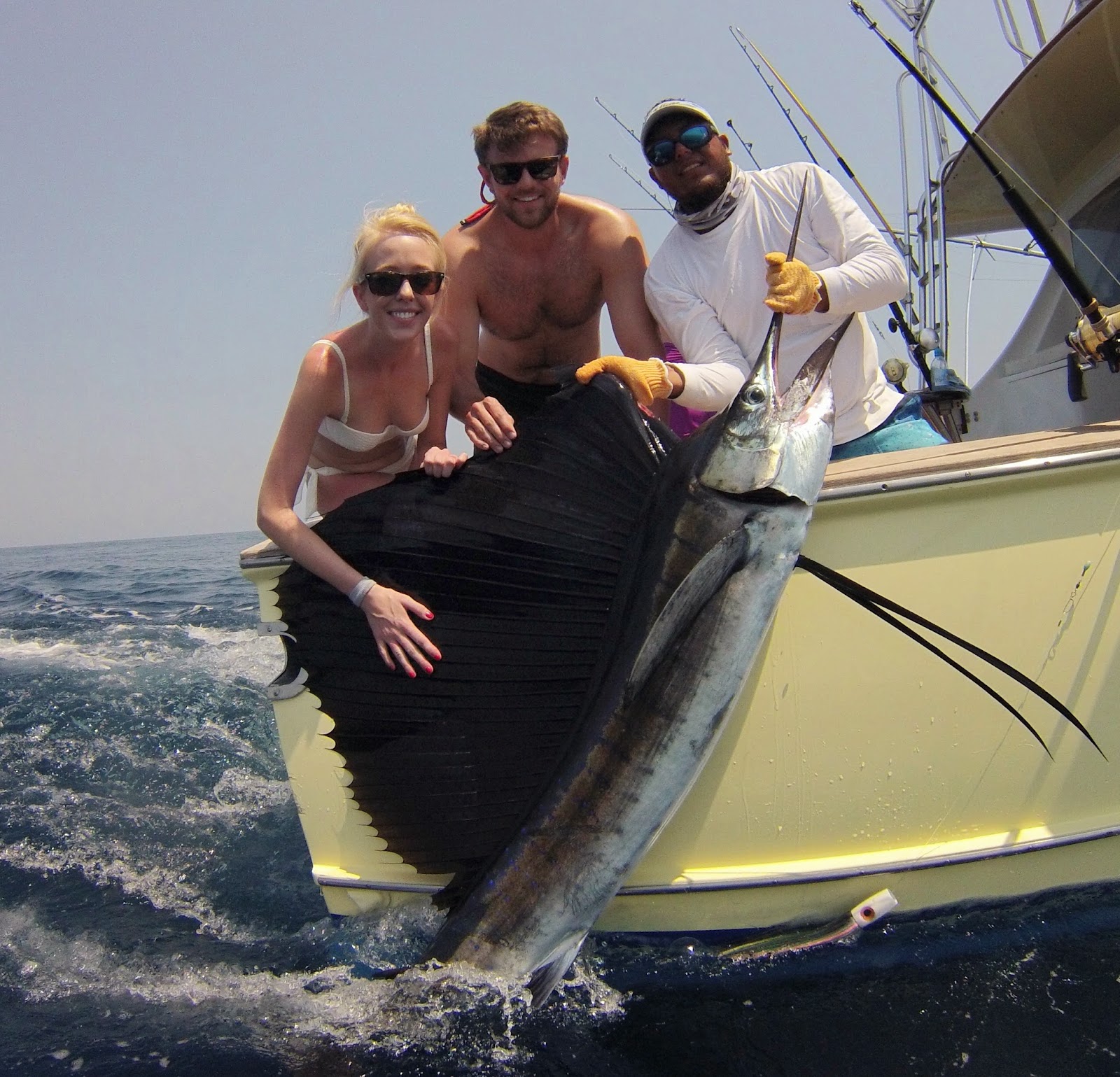 Annie and Bud with a nice one… Chief Tauzin, Craig Johnson, Dennis Eubank, Joe Segulja and Don Gann.
Then came the above crew, ‘El Jefe’ Craig Johnson with Chief and Joe from Stallion hosting clients Don and Dennis fishing April 13th-15th. 7NM inside of where we had been fishing the previous days one of the fleet found sails balling baits in an area of green bordering blueish water. Things got a little hot and heavy when we got there and it was ‘Sancocho City’ in the morning session for the guys with the log-book saying we were 15 from 32 bites at just after midday. To be fair it was a little chaotic for 2 hours with multiples the norm…..Things slowed a little and we had time to cook and eat lunch, after lunch the bite took off again with a couple of back to back quintuplet hook-ups, triples, doubles, pack attacks….awesome to see!! The guys redeemed themselves in the afternoon session with 38 from 48 bites and we finished the day with totals of over 90 raises, 53 releases from 83 bites and a couple of large mahi’s that were in the feeding frenzy on the bait balls… 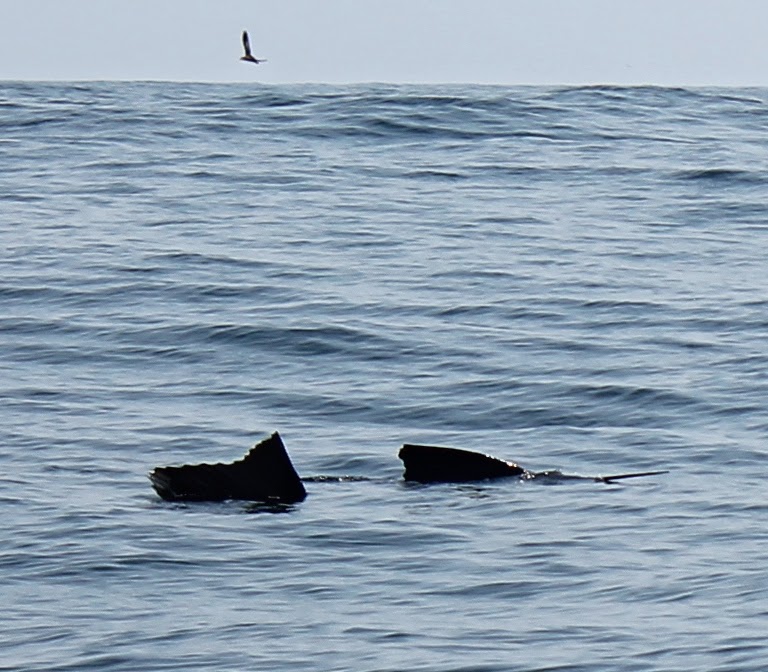 Birds picking and sailfish cutting bait with mahi’s in the mix.
An awesome day on the water! Next day back at the same numbers/area we were greeted with the same sights, fish cutting baits and pack attacks in the spread, by 1100 we were looking at a good day ahead with 15 from 27 bites……then it shut down, fish on the surface but we couldn’t get them off what they were feeding on. We finished the day with 19 from 36 bites and another couple of large mahi’s. The group split up into both boats the last day out with El Jefe Craig Johnson requesting a yellowfin tuna haul on Allure II, Chief and Dennis with the pilots went on Allure with Capt Julio in search of the sails. Out wide we got into the tunas pretty good with a couple of groups of spinners found out there. 19 tunas later we ran back to the sailfish bite for the last 2 hours of fishing. 5 from a dozen bites with the guys on Allure releasing 19 from 31 bites. Great trip!! 95 sails released, 19 tunas and 4 mahi’s boated!! 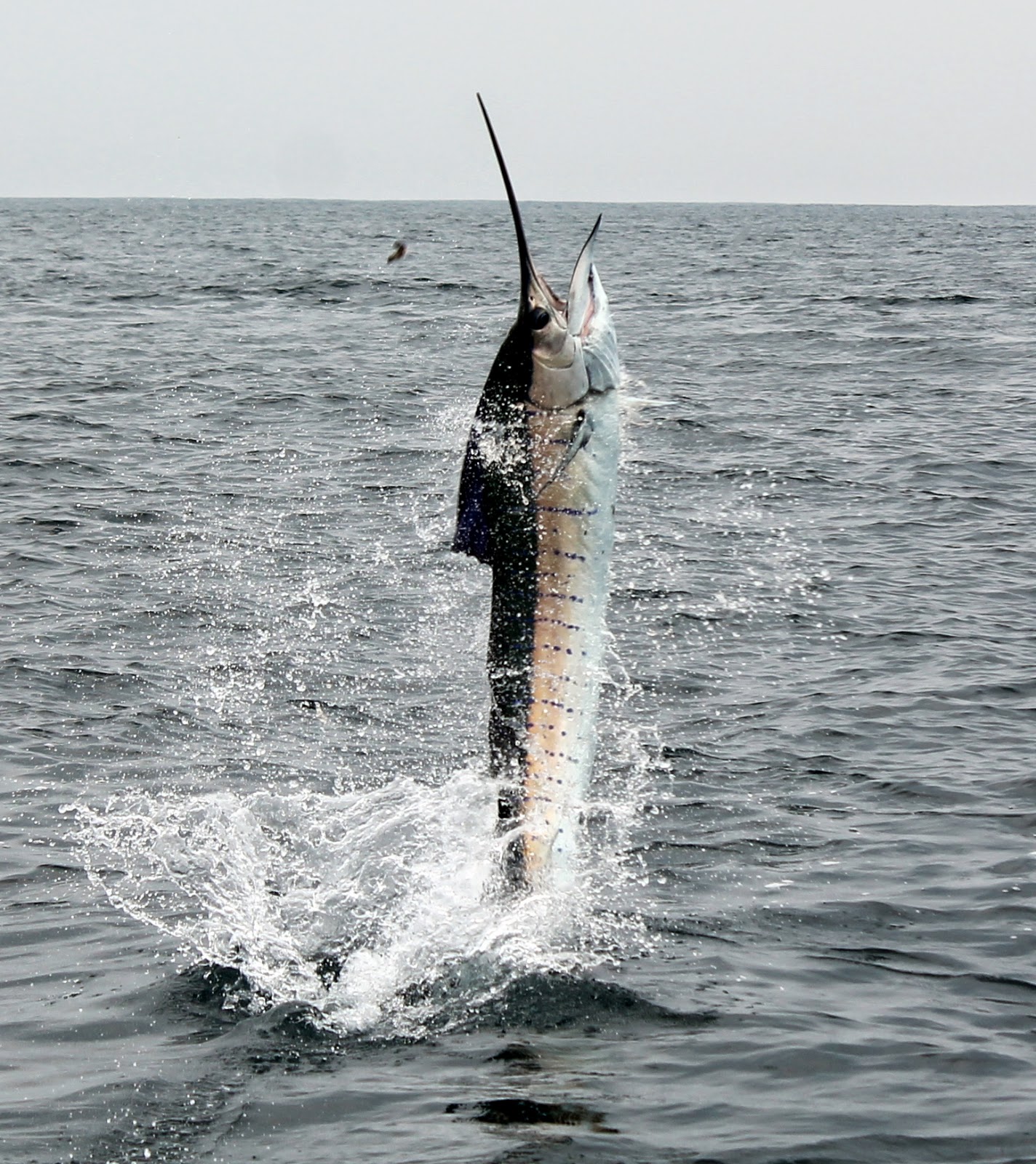 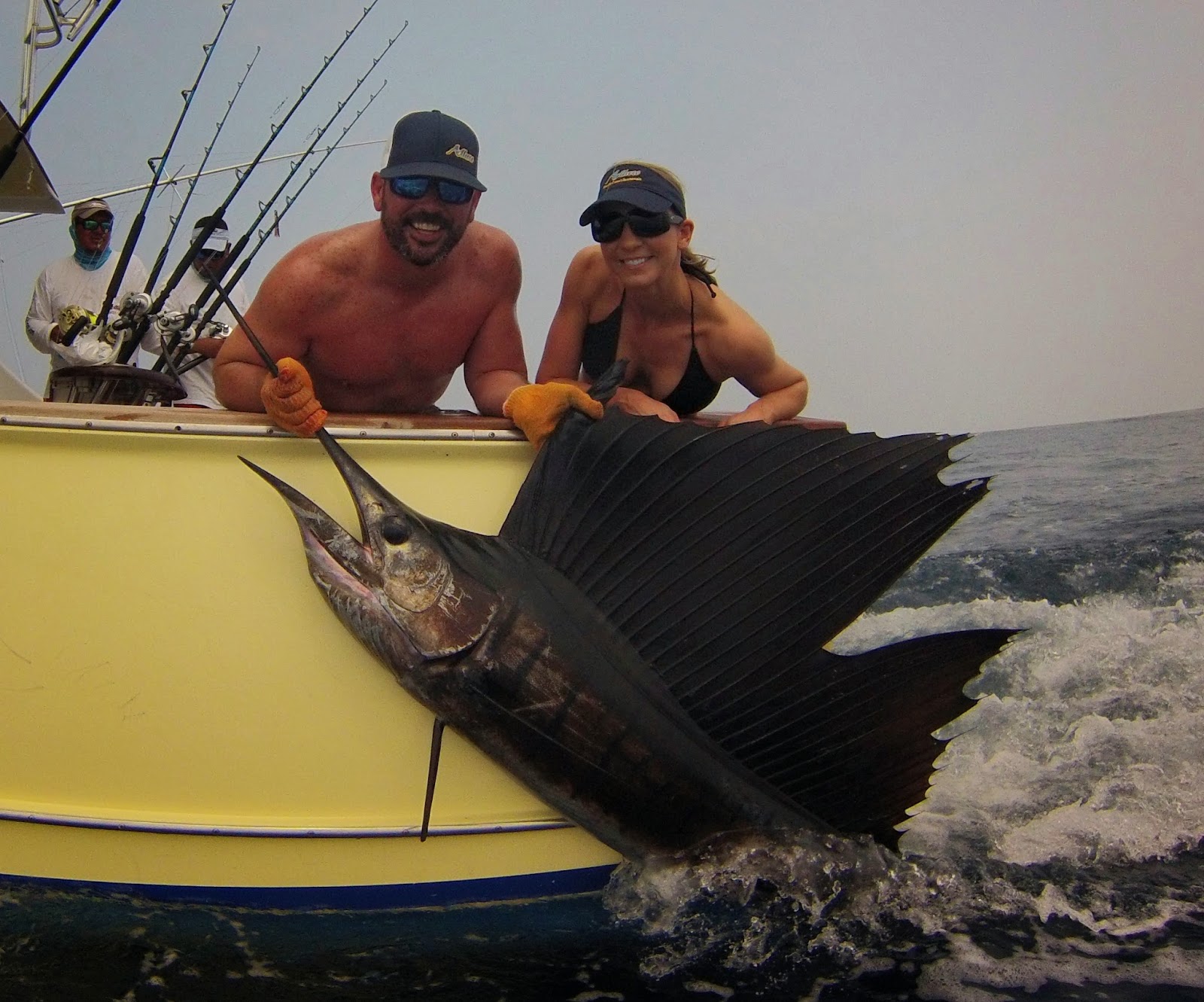 Chief and Amber
Next couple of days April 16th and 17th we hosted these two. Good fishing as well, over the 2 days we got into them pretty good, 18 from 32 the first day and second day out they were biting right through the day with 29 released from 45 bites with 53 raised. Also a couple of tunas boated and a couple of midget sails…some of the smallest I’ve seen here. 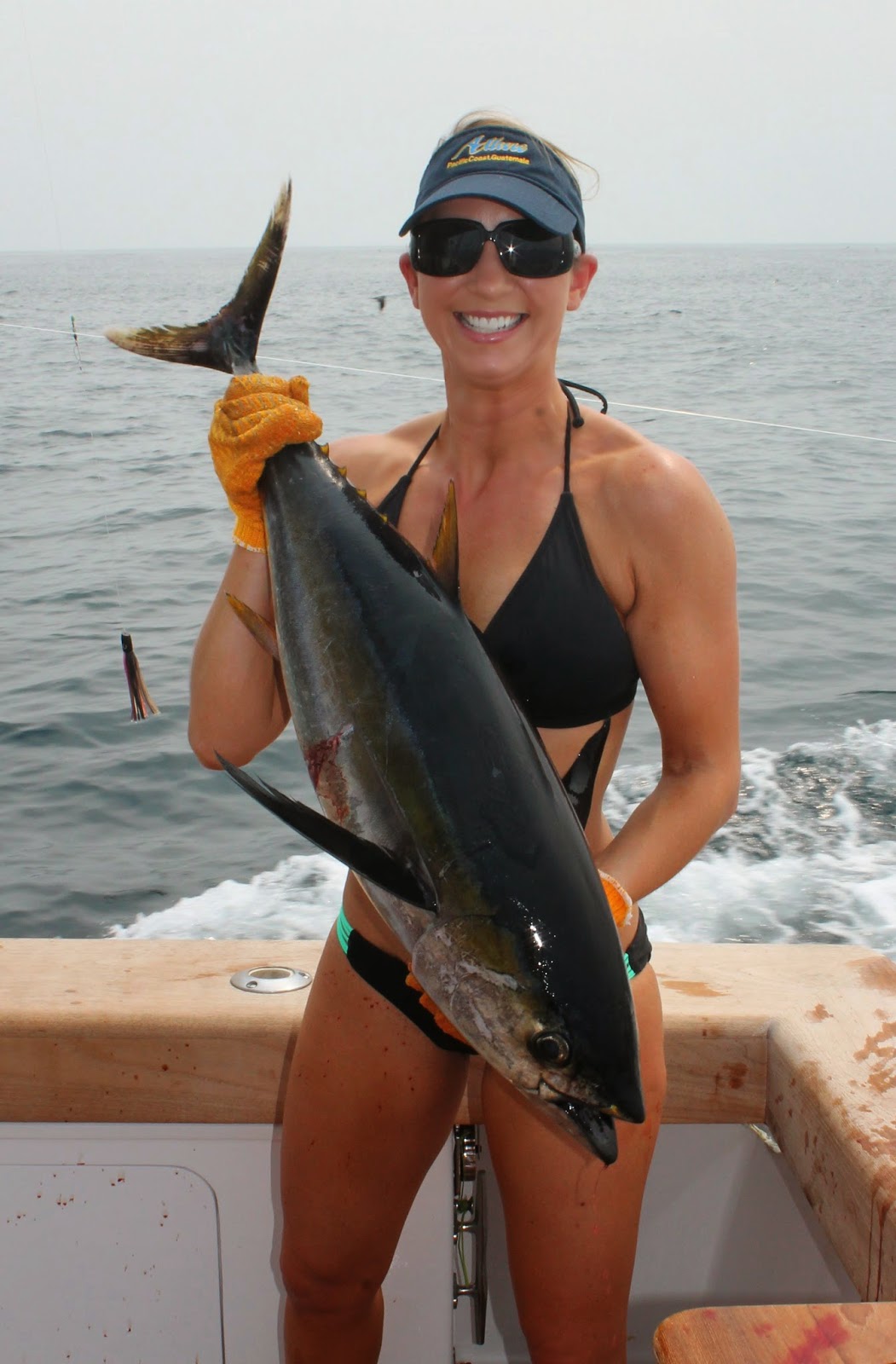 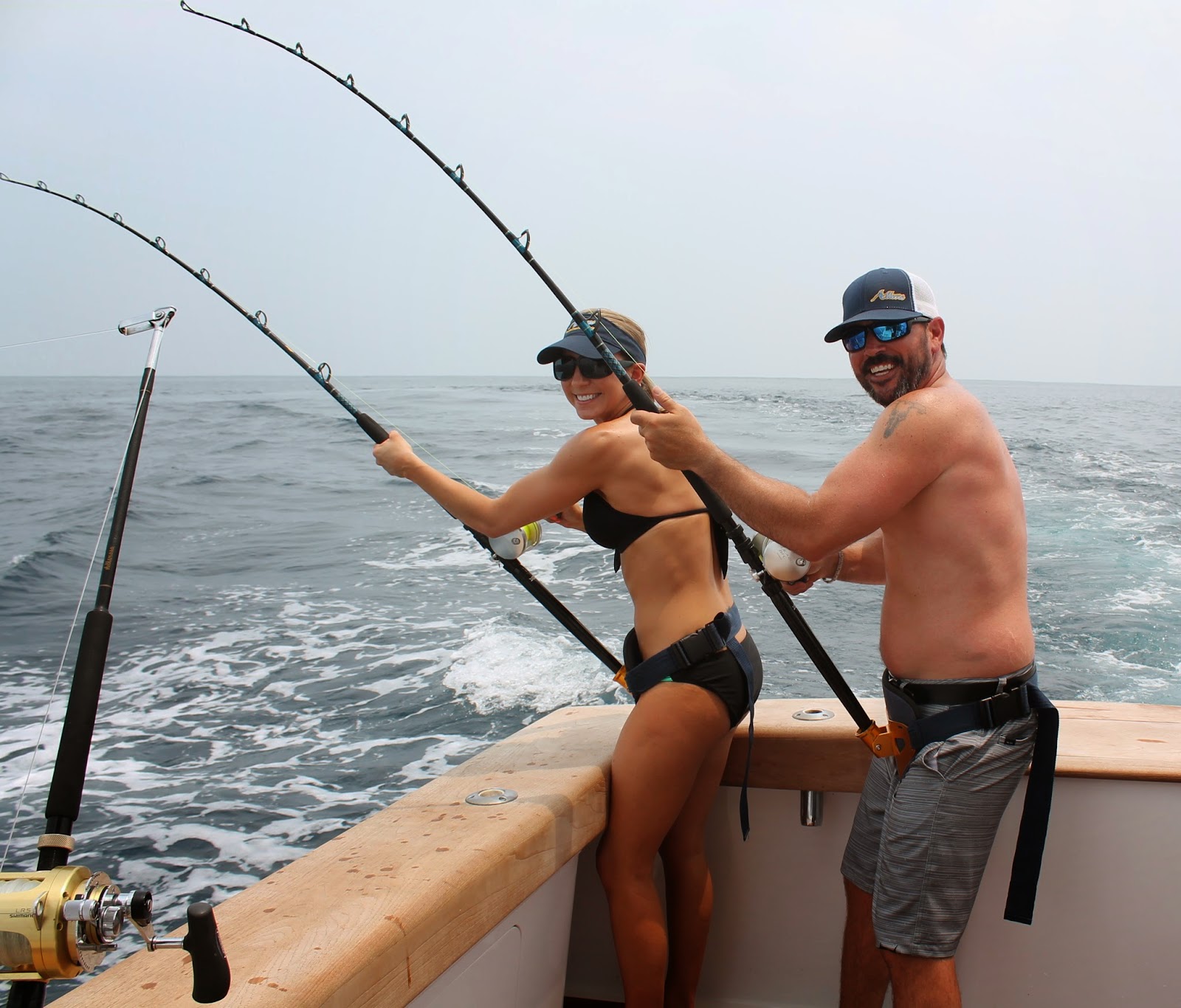 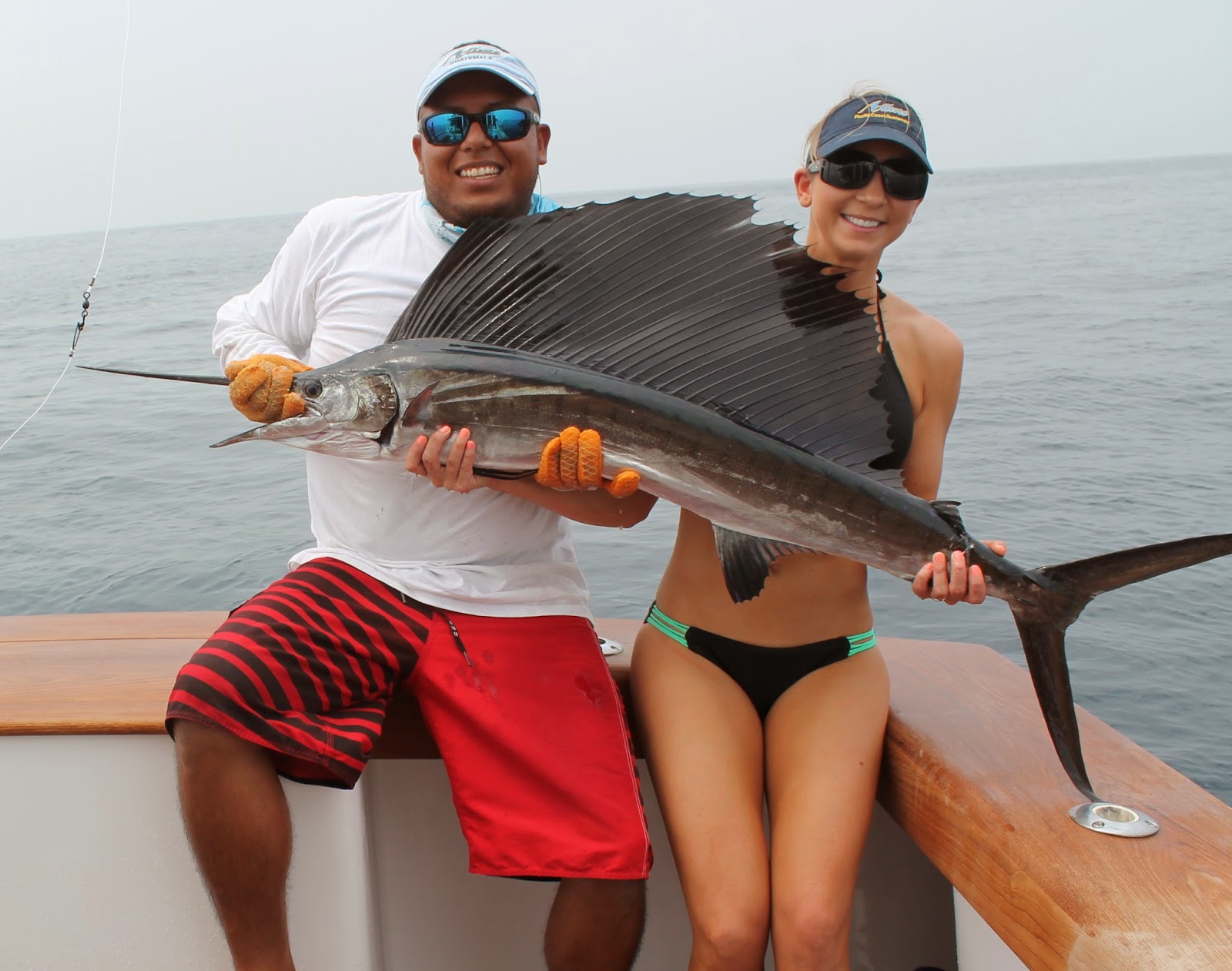 Good trip with these 2!! 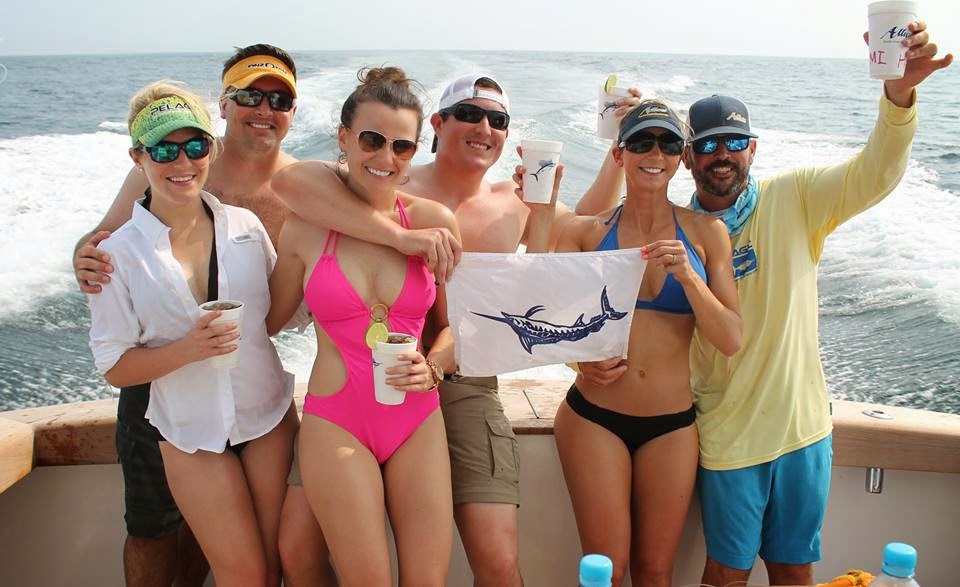 Joany Sylvester, BJ Poole, Corrine Kudlock, Keith Ogdee with Amber and Chief
April18-19, Chief finishing off a marathon trip here hosted the above group for 2 days on the water. First day out we chased our bite finding a strong off-shore current and green water, we kept pushing out looking for the nice stuff though couldn’t find it. Still pretty good in the green water with 8 sails released from 12 bites, 7 tunas boated and a nice blue marlin for Keith Ogdee that came up on the short teaser and an awesome going away bite right off the transom. What a sight…. 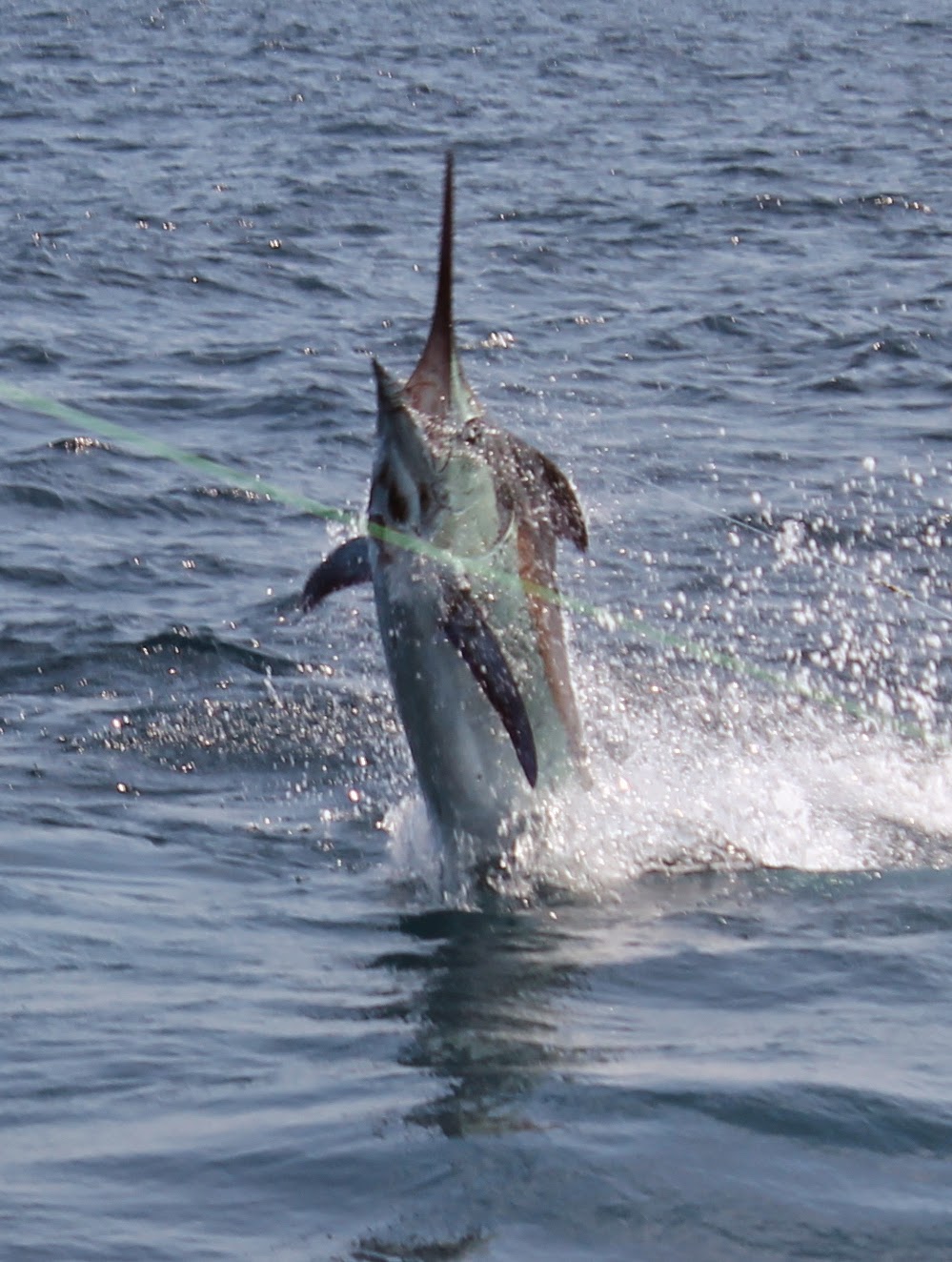 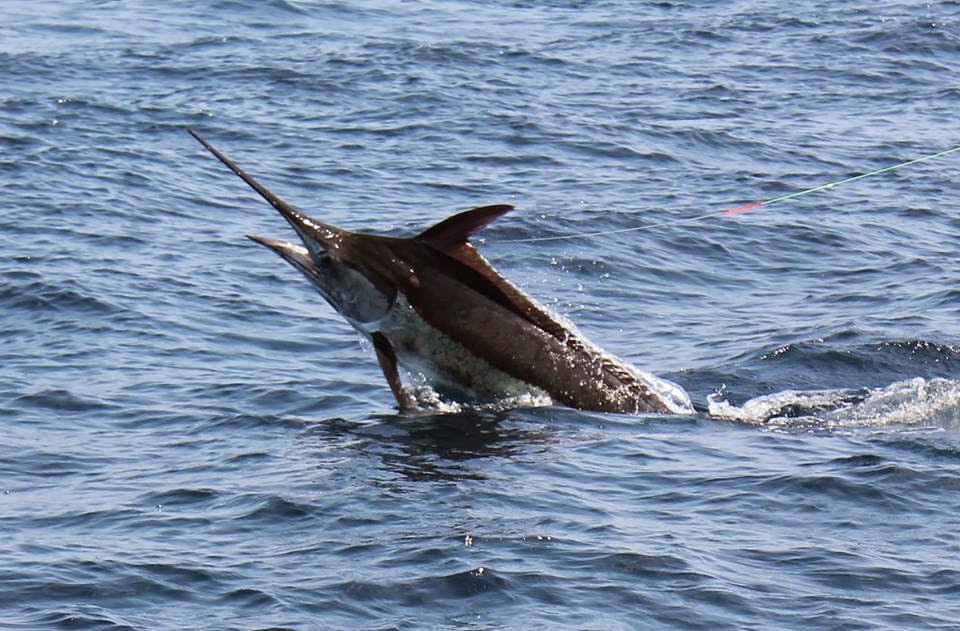 First marlin for Keith!! Pushing 300lb’s…
Looking for something new the next day we covered a lot of area and found some fish out wide with  couple of the other boats scouting, lots of jumpers and a late afternoon pick ended up with 7 from 13 bites. A strong current pushing in and from the east has things changing. Hopefully for the good!!
We will be out there fishing the next few days and into next week and into May. We have some openings in May and look forward to getting out there, get in touch with us get a group together and get into some of the best billfishing around….