December 11th-13th we welcomed back to Guatemala Mike Fay and Vern Leder, it was great to catch up with them again and get into some good fishing as well. Although it had been a couple of years since their last trip here they were keen to get straight into it and they fished exceptionally well with a 75% hook up ratio over the 3 days. On our first day out we raised 26 sails with Mike and Vern hooking all their own fish they released 16 sails form 21 bites as well as Vern boating this nice mahi…. 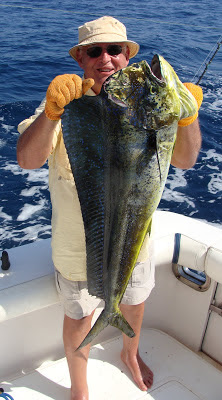 Vern Leder
A great welcome back to Guatemala! The next day we fished the same area about 30NM to the SE and found the fish about mid-morning. We trolled off them looking for a blue though still had a great day releasing 9 sailfish from 14 bites. With a bit of a stiff ENE wind blowing the last day we went to the west and found current line loaded with bonito’s, Mike caught a nice mahi and also had a blue marlin of about 300lb on for an exciting few minutes before the hook pulled. For the rest of the day the guys were pitching the light stuff, 12lb test off the teasers and had a blast releasing 7 from 10 bites. 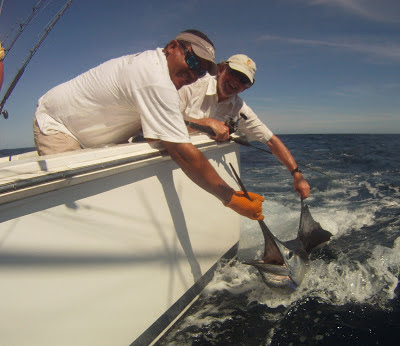 Mike with a nice sail on 12lb test
A great trip then for Mike and Vern with 54 sails raised and 32 releases from 45 bites, a couple of big mahi mahi and a missed blue. With the majority of the fish coming up on the teasers it was exciting fishing! Here’s what Mike had to write in the visitors book:
“Amazing! That is the word that comes to mind. Great service, fantastic attitudes. It is all about taking care of the clients and catching fish!! Thanks guys. What a great trip! Mike Fay

December 8th we fished a local group for Matt Hartell’s ‘despedido soltero’. Matt, from Antigua’s Old Town Outfitters and a few friends celebrated it with a day’s fishing and a night at Sailfish Oasis. We went out wide looking for tunas though unfortuantely couldn’t find the spinners. Despite that the fishing was good, not working in any one area we released 8 sails from 12 bites and one mahi mahi, great fish taco’s for lunch! 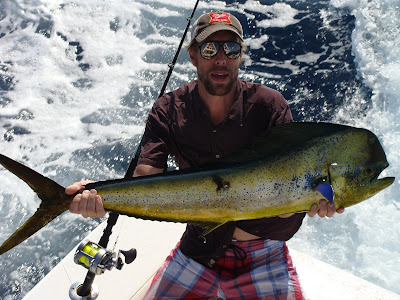 Mateo with lunch
With a couple of double headers it was good to see fish and bait over a large area. Inshore to the east the fleet got onto a good sailfish bite, the fishing is looking good in Guatemala!! 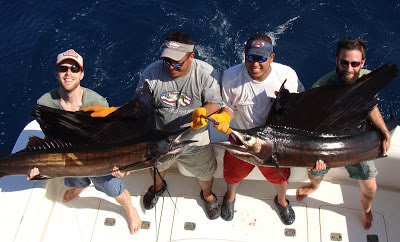 November 30th and December 1st we fished regulars Hill Dishman, Chief Tauzin, Todd Mucha with John Henry Johnson here for his first billfish trip. Out wide we got into some spinner dolphin and boated 9 good sized yellowfin tunas, throw in a few big mahi mahi and 12 sailfish bites it was a good 2 days of fishing. 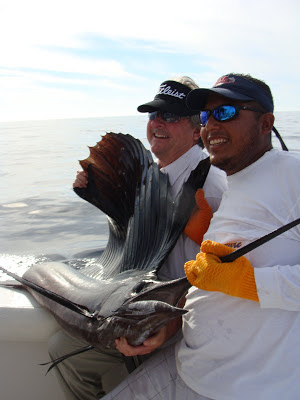 The fishing has been good the last couple of days here in Guate with boats releasing up to 15 sails a day, we are back out tomorrow and then again next weekend. More reports to follow though the season is shaping up to be another great one in Guatemala. We still have the odd opening in February and March with January 21 to 24 open as well. Get in touch with us to secure a trip in these prime months.
We also got notified last week by The Billfish Foundation that ALLURE was the top blue marlin release boat for the Pacific in the 2011/2012 season. Guatemala featured well with most sailfish releases and sailfish tagged, it is definitely THE prime billfish location in the world. Come and experience it…..