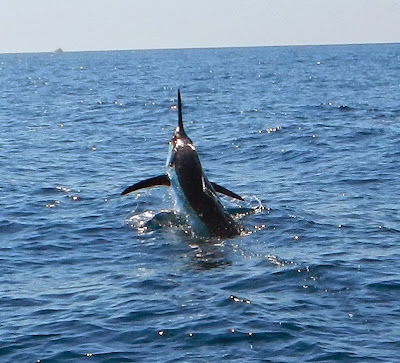 Nice fat blue for Allure II
Both boats were out there fishing December 6th though the 8th and enjoyed good fishing in different areas, always a good thing having different bites to choose from and both producing good numbers! On Friday the 6th we took out Allure with Team Wisconsin while Hill Dishman took the helm of Allure II with anglers Casey McDermand, Ryan Pyburn and Trent Marino. The fishing had been very good offshore so we chased that while Allure II stopped at 25NM on the side of the pocket raising a triple header right off the bat. On Allure we went out wide to the edge looking for the bite from the previous days, the current out there was pushing to the west pretty good and we found the blue water and fish mid-morning about 10NM from where they were the previous day. It was worth it out there with a good steady bite all day long with 24 releases from 36 bites as well as 5 big mahi’s. Good times for Team Wisconsin!!

Back in-shore the fishing was also very good with Hill and the team having 25 sailfish bites and releasing 14 of those. The highlight of the day was Trent getting the bite from a good solid 350lb blue marlin on the rigger bait. A real nice fish on 30lb test for Trent and Hill doing a great job on the wheel. 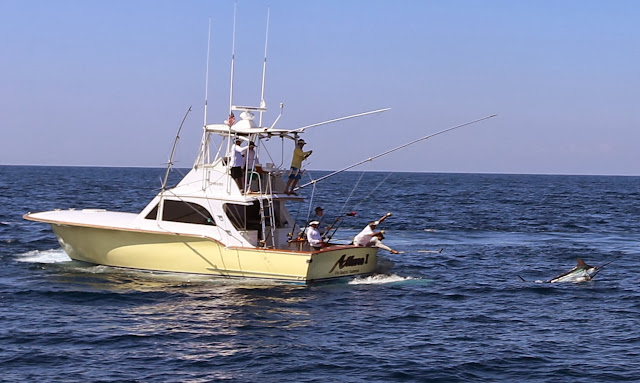 Nice shot and nice fish on the 30lb 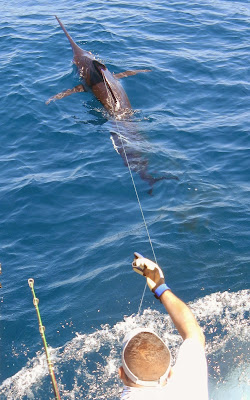 Mate, Enio on the leader.
Team Wisconsin had such a great day they decided to stay on for an extra day and Julio took them back out on Allure. Back to the days previous bite at the 25NM mark they made the most of their opportunities releasing 20 sails from 25 bites. On Allure II we went wide chasing the bite, the fish had moved 14NM down the edge and were not as concentrated as the day before. It was still steady fishing though quite a bit slower, good averages for Casey, Trent and Ryan missing just 3 fish releasing 13 from 16 bites.
On our last day out we split up the guys between the both boats having a mini tournament with Casey and Trent heading out with Julio on Allure and Hill and Ryan on Allure II. Allure went back to the 25NM fishing hole while we went out to the east looking for a new bite. The fishing dropped off some for the whole fleet with boats spread far and wide looking for the fish. Our first of the day was a great catch though, this nice bull mahi on the fly for Hill….. 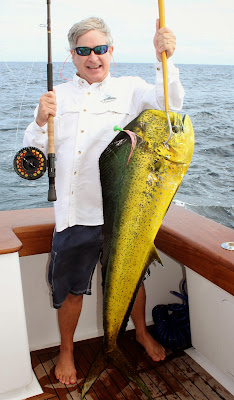 Pretty tough going from there on in, we covered some ground and raised a double, teasing one in for Hill on the fly and getting the other on a bait for Ryan. We landed another nice mahi and that was our day. With tournament rules having a sail on the fly worth 3 pts and on conventional 1 pt we came back to the dock with 4pts. Allure had the same, they saw 2 and caught 2, both on the conventional tackle…..(we set them up there). Slow fishing to finish off but fun times out there and a big night down at Café No Se in Antigua to round off an excellent weekend here in Guatemala. 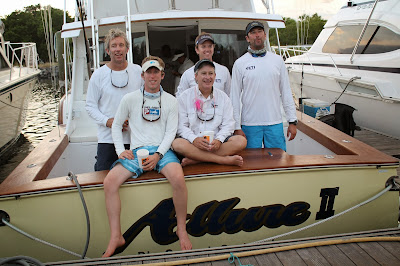 2nd from left, Ryan Pyburn, Hill Dishman, Trent Marino and Casey McDermand
The water was a bit cooler and off-colour to the east though things should start cleaning up and getting back to normal here soon. Allure II is back out there in the coming days so more reports to come.
We are counting down to the big annual New Years eve bash here at Sailfish Oasis with the Blue Dawgs confirmed to play once again. Anyone wanting to come down and enjoy the festivities is more than welcome, it is always a blast.
Apart from that we have January 6th through the 9th open as well as some dates at the end of January, prime dates!