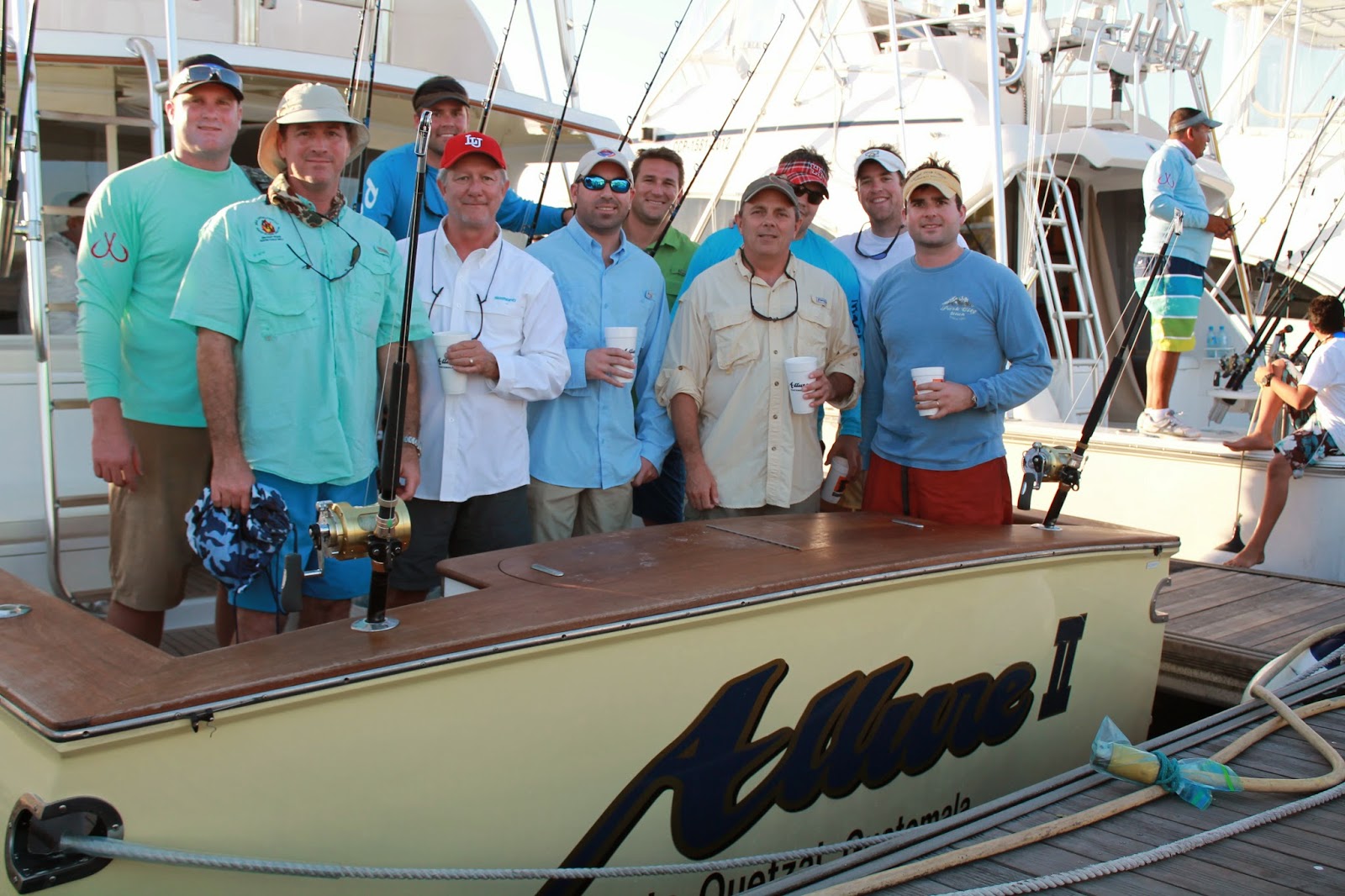 January 24th and 25th we welcomed back the Mark Smith group for their yearly excursion to Guatemala. From Beaumont, Texas Mark the main man along with Shelby Gibbs, Fisher Maddox, Matt Johnson, George Cherry, Steven Toeppich, John Cochran, Jeff Sikora, Mark Boyt and Bent Cantelope. Fishing on ALLURE and ALLURE II they released 21 sailfish from over 30 bites with ALLURE having the upper hand for the trip. Good fun group with good times had at the lodge and out on the water in perfect conditions! 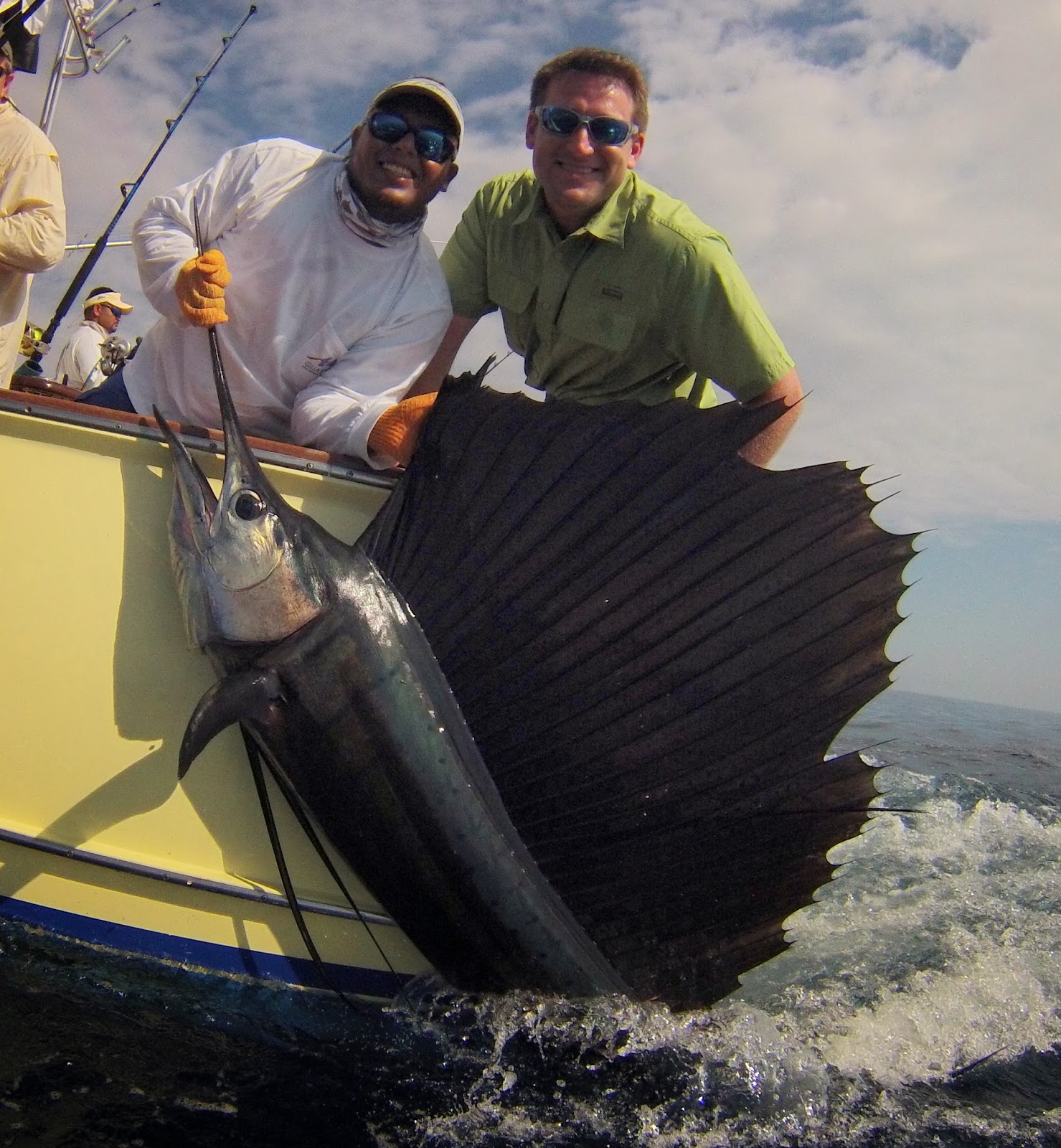 CHRIS BEAN GROUP
January 26th and 27th also from Beaumont we welcomed back Don Christopher Bean aka Snr Frijole to Guate fishing aboard the new ALLURE II with work mate Rick Burgard and friend Robert Wall. Snr Frijole is one of our most consistent guest’s here to the Oasis and normally brings the luck. This year we had a tough one with green water everywhere. The fishing was tough, we went far and wide looking, not too much out there, though we still had a great time raising 6 sailfish, getting 4 bites and releasing 3. Throw in 4 yellowfin tunas and a bite from a huge 50lb+ mahi, major que nada!! 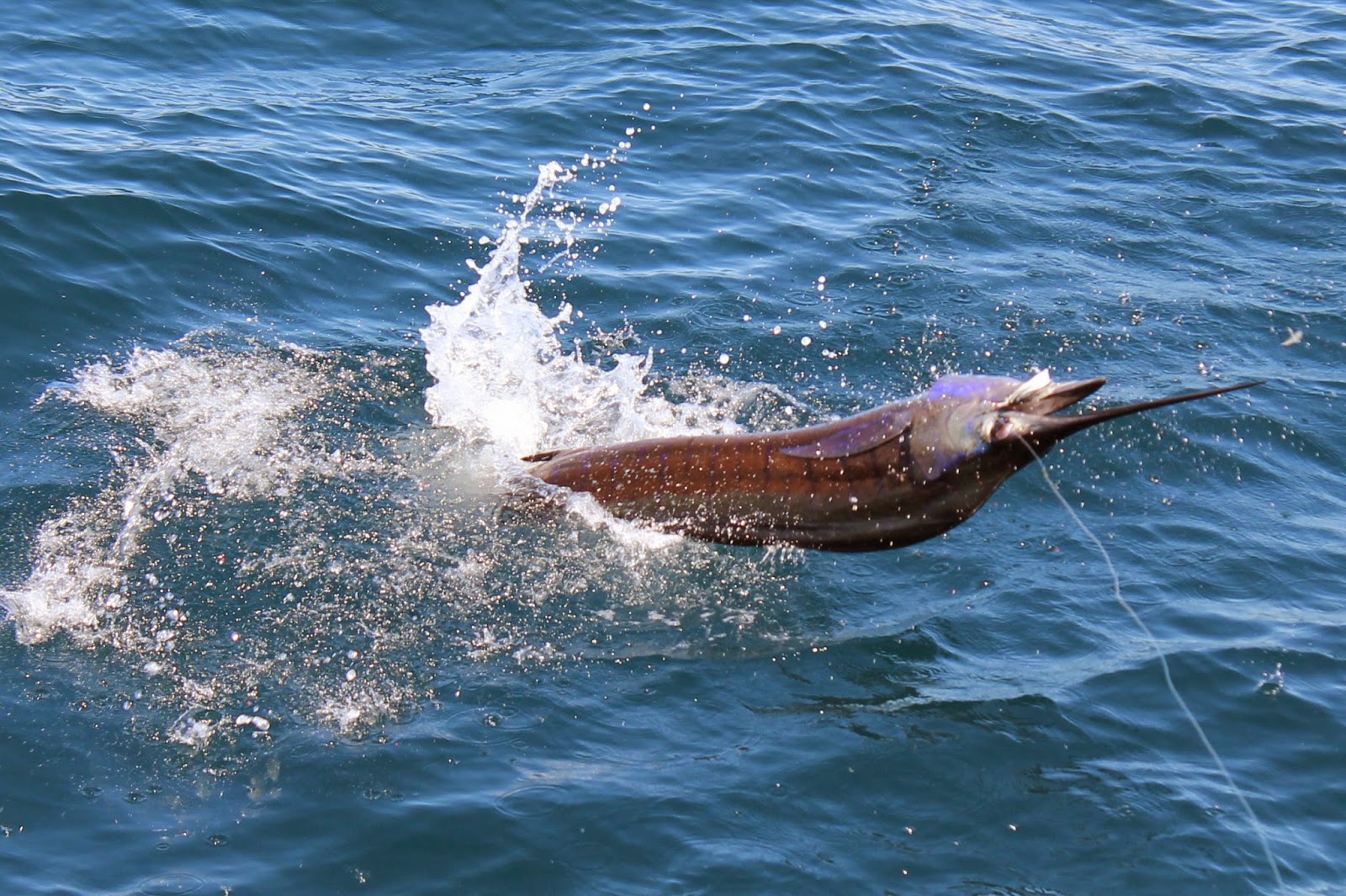 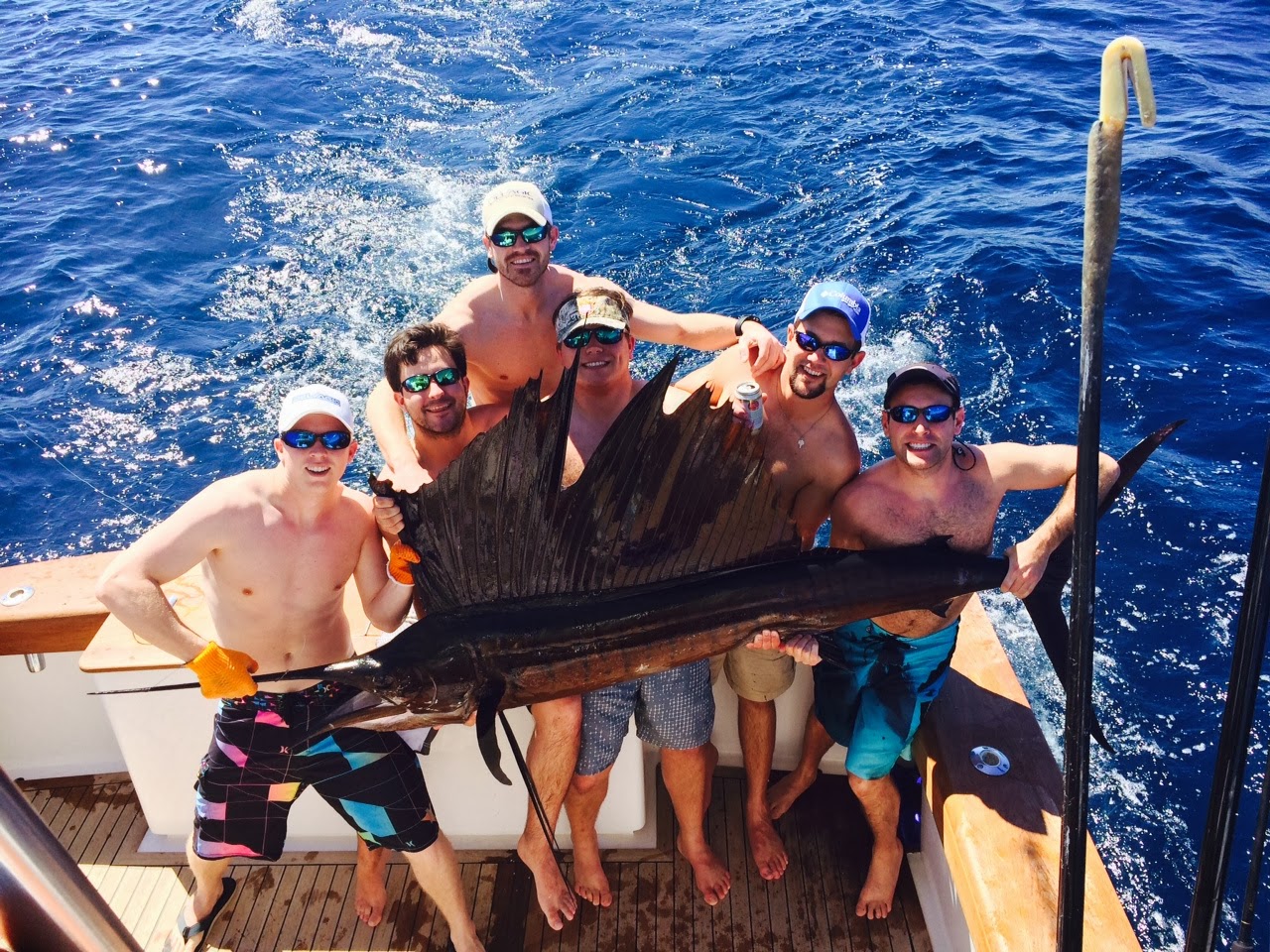 January 30th-31st for his second trip down here this time with the ‘crew’ Cullen Cone, Richard Beller, Sterling Curry, Nathan Matusck, Max Roeder and Neal Simpson enjoyed some good fishing. The blue water was pushing out wide form the east and the long runs were worth it! First day on ALLURE II the guys were on it pitching to fish off the teasers, we raised a lot of funky fish that would tease though wouldn’t switch, the ones that did they hardly missed!! we raised 27 sails and they released 14 from 18 bites as well as a late in the day nice 130lb striped marlin for Max Roeder, tagged and released! His first sail and marlin today……good stuff. 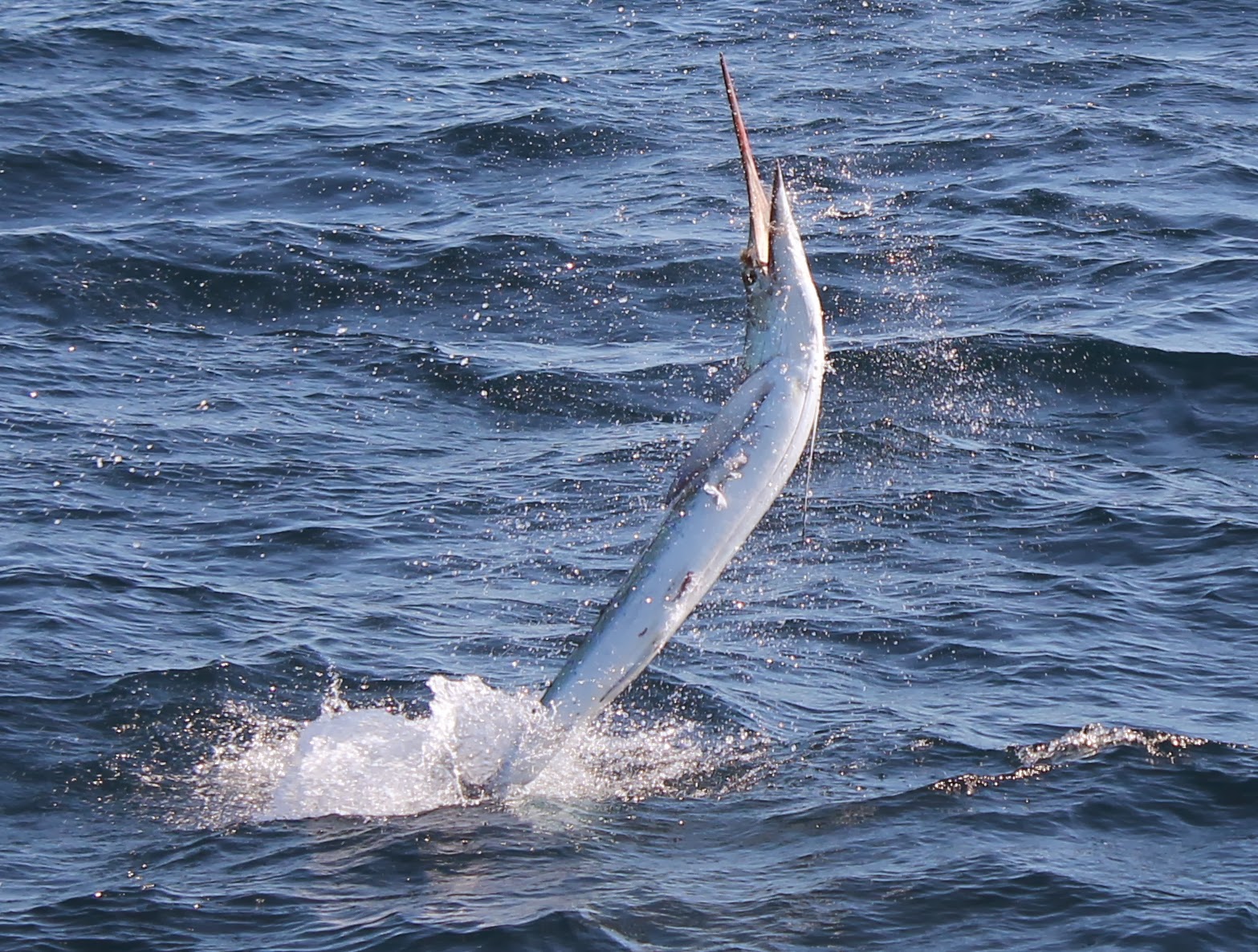 Second day out mostly rigger bites today with a few on the teasers, still good fishing starting the day with 2 yellowfin tunas from 4 bites. From there on it was fairly steady with 13 sailfish releases from 17 bites. The guys were kitted out with the Go-Pros and made an awesome short vid, check it out:
https://www.youtube.com/watch?v=rj1nw0kmEYk
They’re already planning their next trip down, that says it all…..
BROOKLYN ROUX GROUP 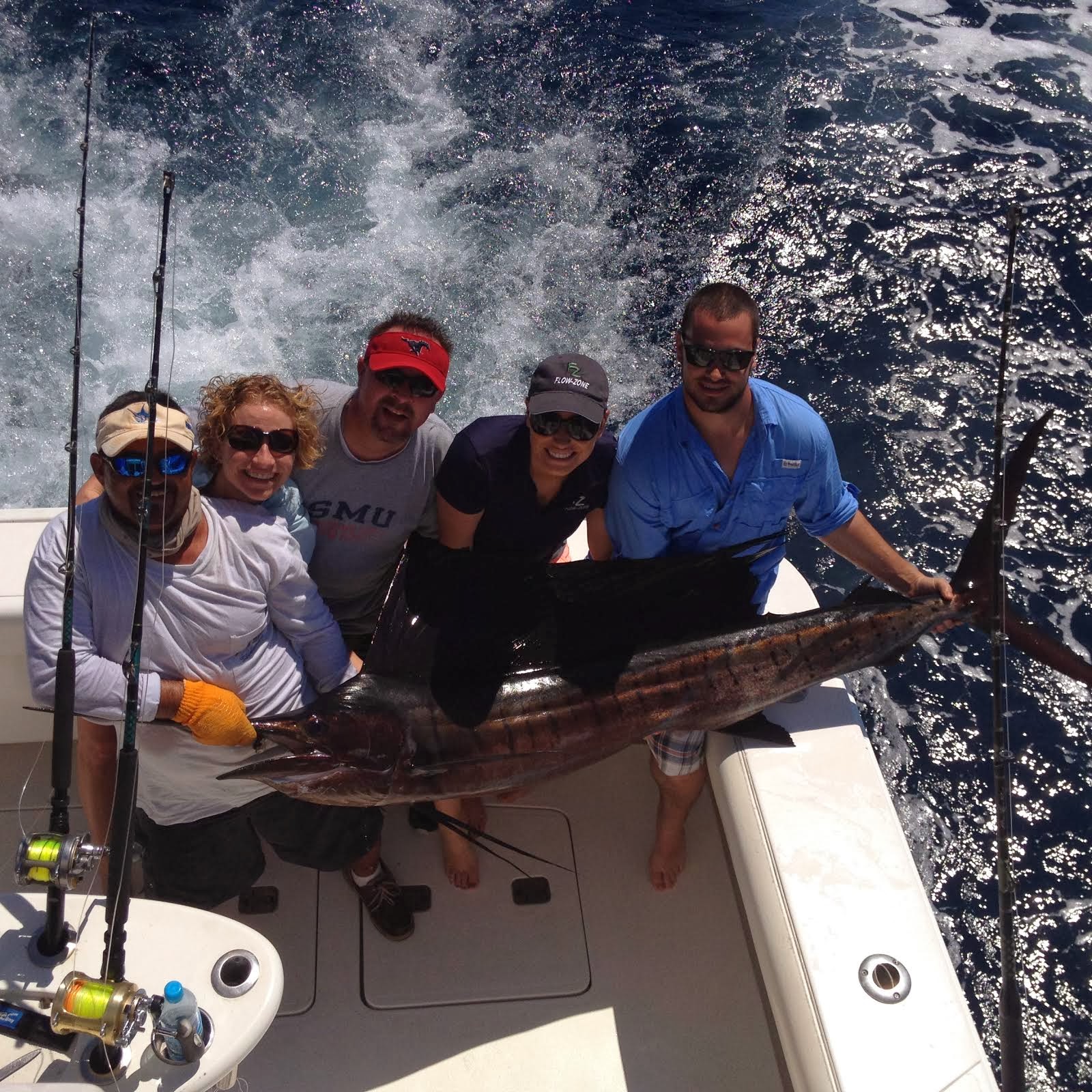 Stephanie Fox, Chris Morris, Brooklyn Roux and Daniel Cottingham were down for the same dates January 30th and 31st fishing aboard ALLURE. They also enjoyed a good first day out releasing 11 sails from 16 bites. the next day they chose the inshore option getting a nice sized mahi, 1 from 2 sailfish released and some big jacks and sierra mackerel along the beach in the afternoon. 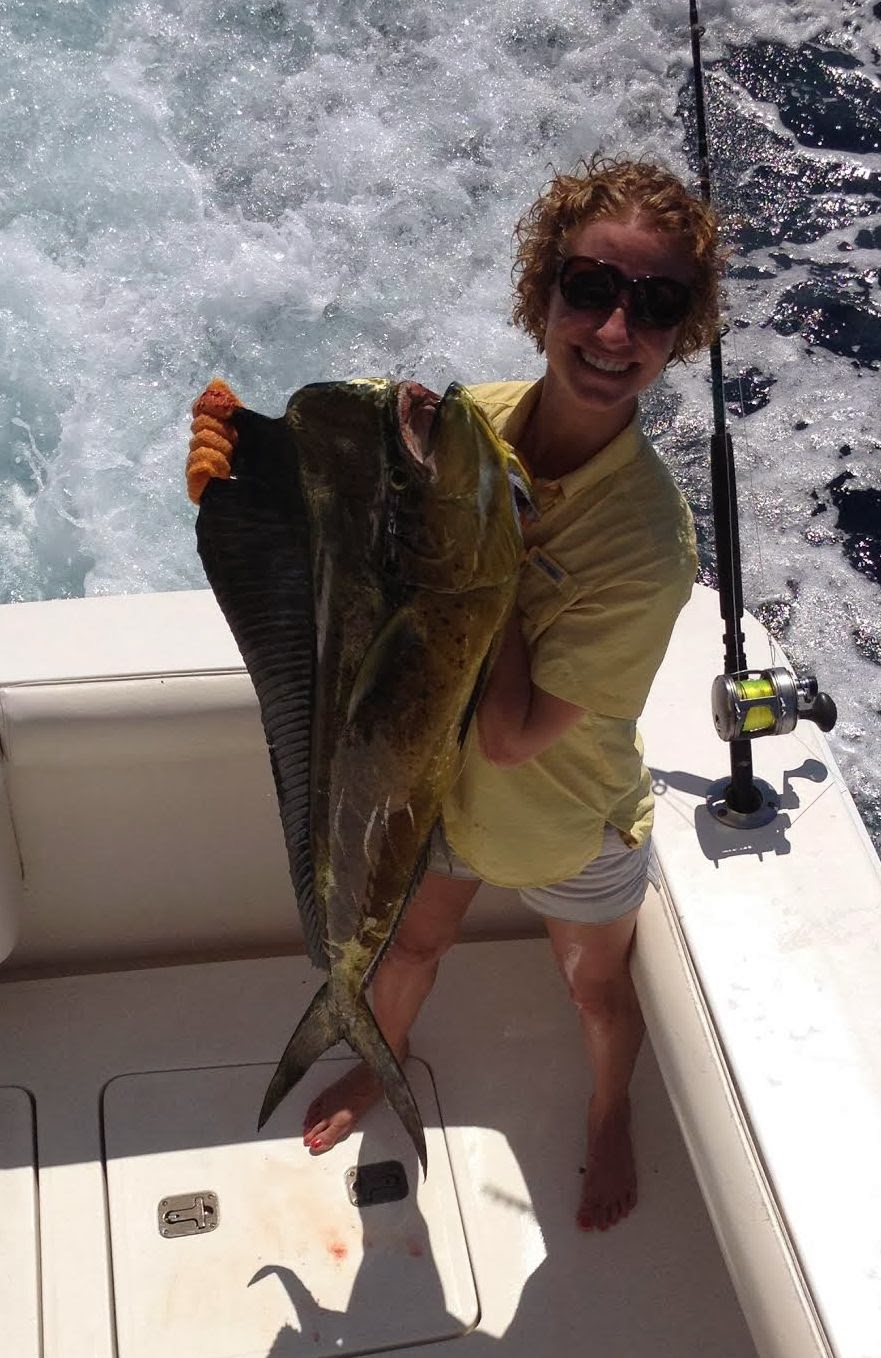 Stephanie with a nice bull mahi.
1st day of February we were back out there on ALLURE II with owner Hill Dishman and new CVL owner David Salazar trying it out on the fly. Again, some funky fish, tough to tease all the way in to cast to, we raised 8 for the day, 3 of which teased in and released 2 from 2 bites, 100% averages for the guys.
2nd of February Hill took the helm of ALLURE II with his wife Donelle and friends, they raised 6 sails and released 3 from 3 bites, the highlight of the day was an aggressive teaser bite from a nice 140lb stripey!! A beauty fish there and a day maker…. 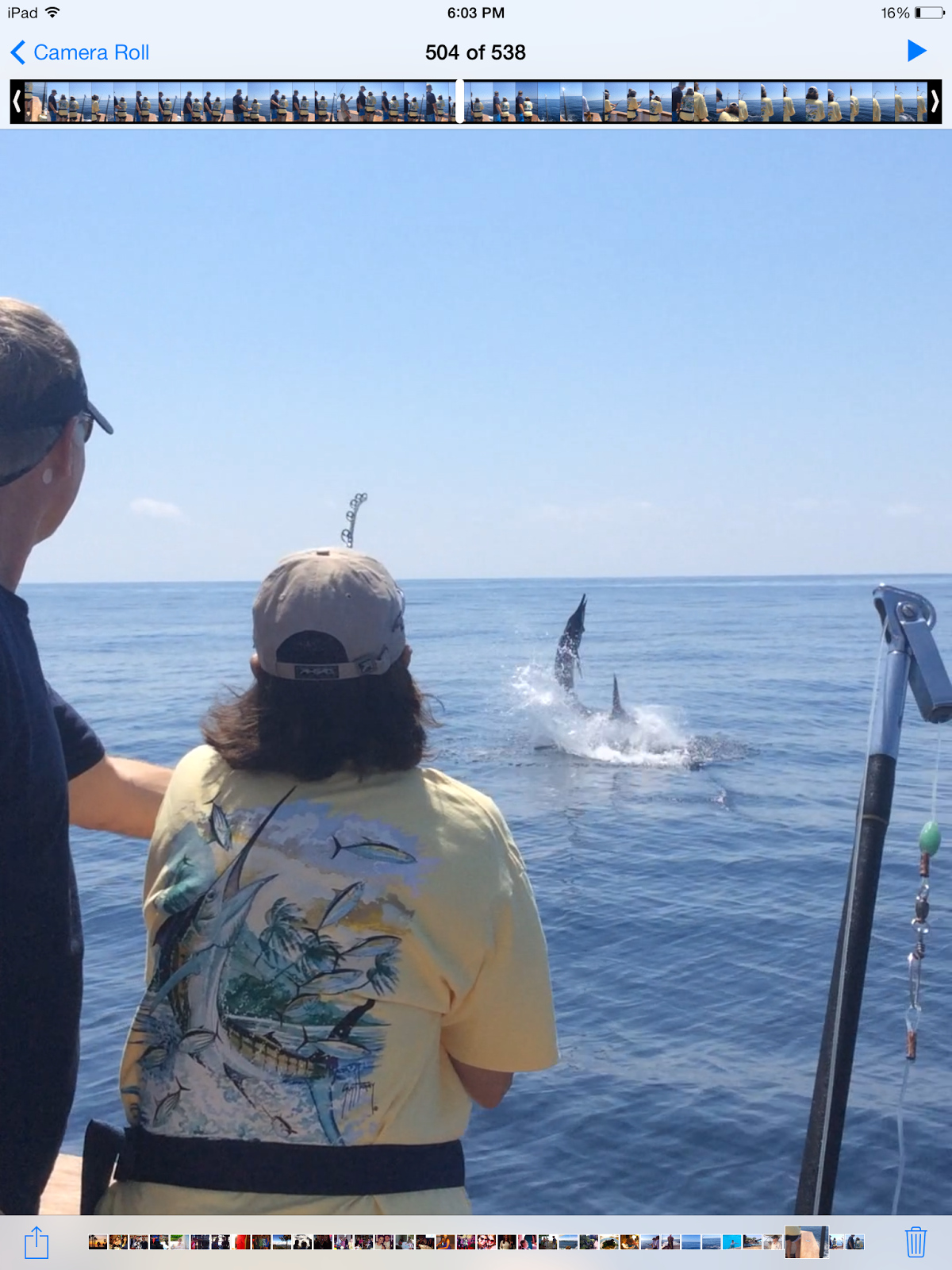 On ALLURE it was  a bit slower with 1 from 2 bites and a nice big 400lb blue marlin in the teasers though unfortunately no bite……
The fishing picked up later in the week and has been good out there the last few days with boats releasing up to 28 sails. We are back out there tomorrow and looking forward to getting into it. Still some opening’s in April and May………