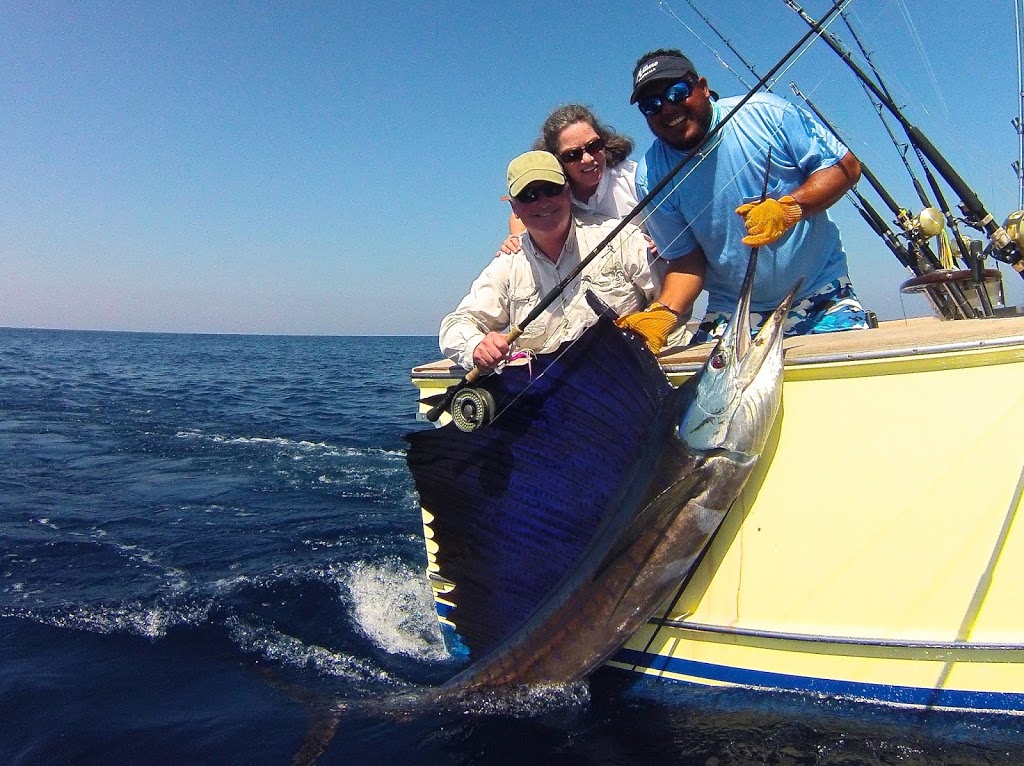 Smith and Suzy with mate Enio.
January 31st through February 4th we welcomed back Smith and Suzy Ragsdale to Guatemala, it had been a few years since we last fished with them and it was great to get reacquainted again. This was strictly a fly trip, no pitching hooked baits to the ones that didn’t want to eat the fly, and I respect that. The body of fish we were on the fleet had been fishing for the 7 days prior to their arrival and the sheer size of that group of fish was incredible, we stayed on that bite as it slowly moved east and offshore for the next 7 days. An unbelievable body of fish, and amount of time to stay on the one bite!! 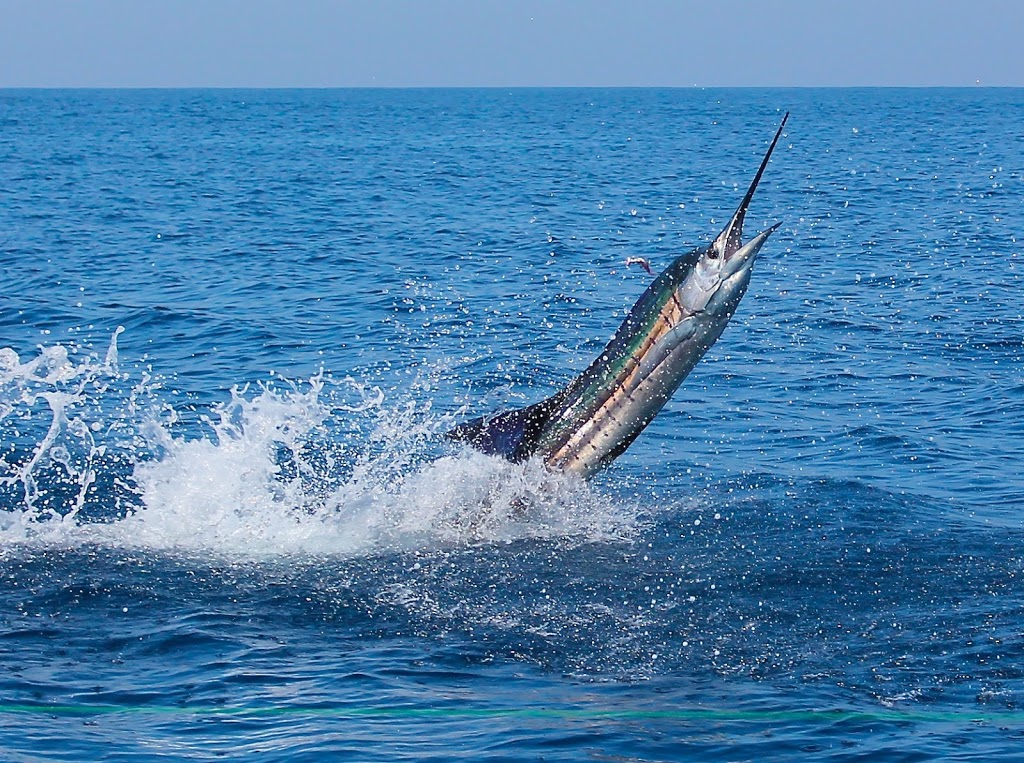 Beautiful shot of a big sail tearing it up…
Over their time here we raised 181 sailfish into the spread, as the bite moved to the east and offshore the fish definitely got more finicky and tough to tease all the way in and switch to the fly. When they did we had a lot of bill swipe/bites resulting in many fish pulling off the hooks into the fight. From the 181 raises we got 78 of them to bite the fly releasing 37 in total. Suzy did an excellent job releasing the majority of these fish as well as boating 3 yellowfin tunas. 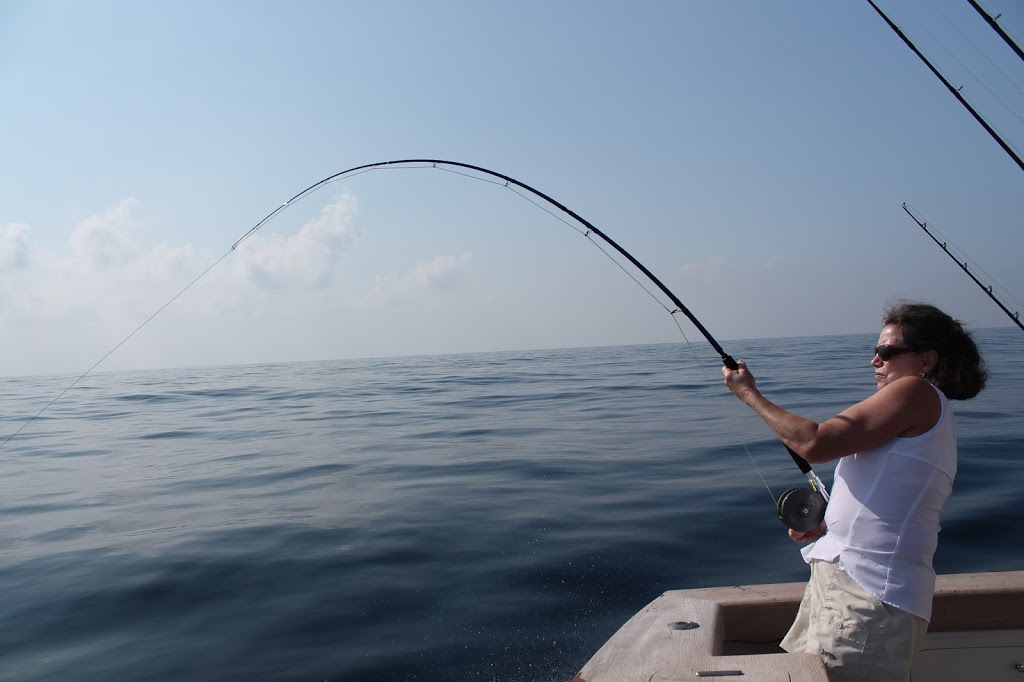 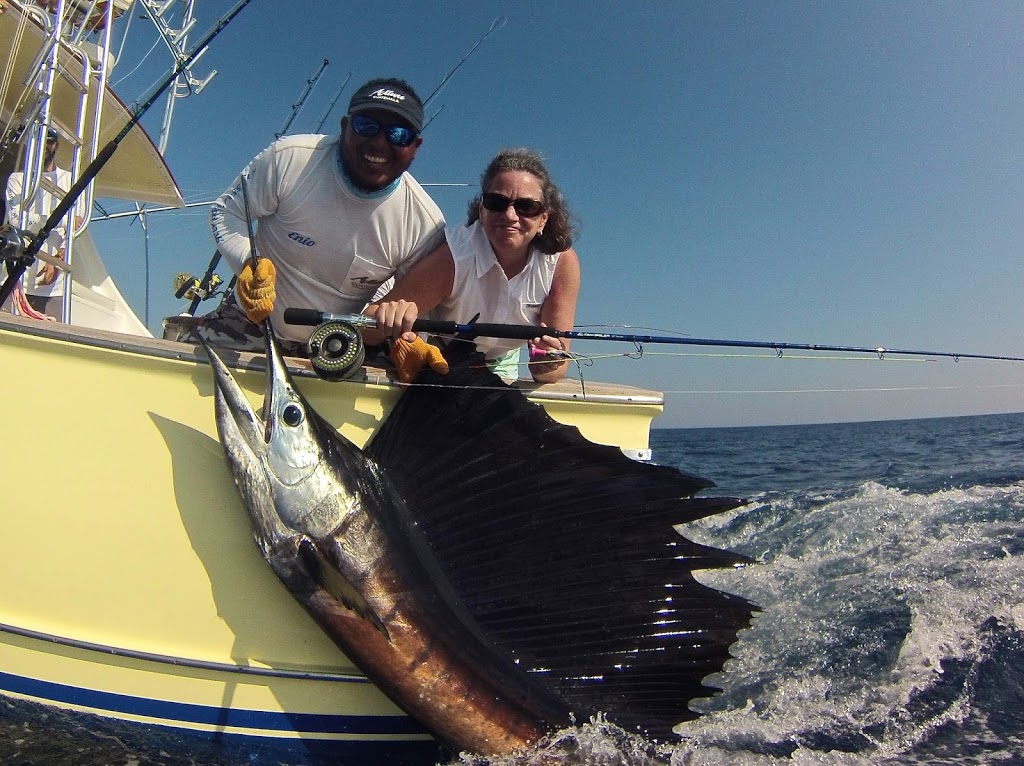 And the results…nice fish Suzy and nice rod Cammy!!
On our second to last day out the fish were found to the east near the edge and things really didn’t get going till after lunch when we started raising sails…later on we raised a double, one sailfish and a hot blue marlin. What can you do….the boat was in neutral and we cast the fly, all we could do was hope the sailfish didn’t eat the fly, with no prop wash the marlin was in kill mode looking for something to eat once the teaser was cleared, the sailfish sat under the fly, Smith popped the Cam Sigler fly and the marlin spun around and crushed it before the sail could react….what a bite!!!! 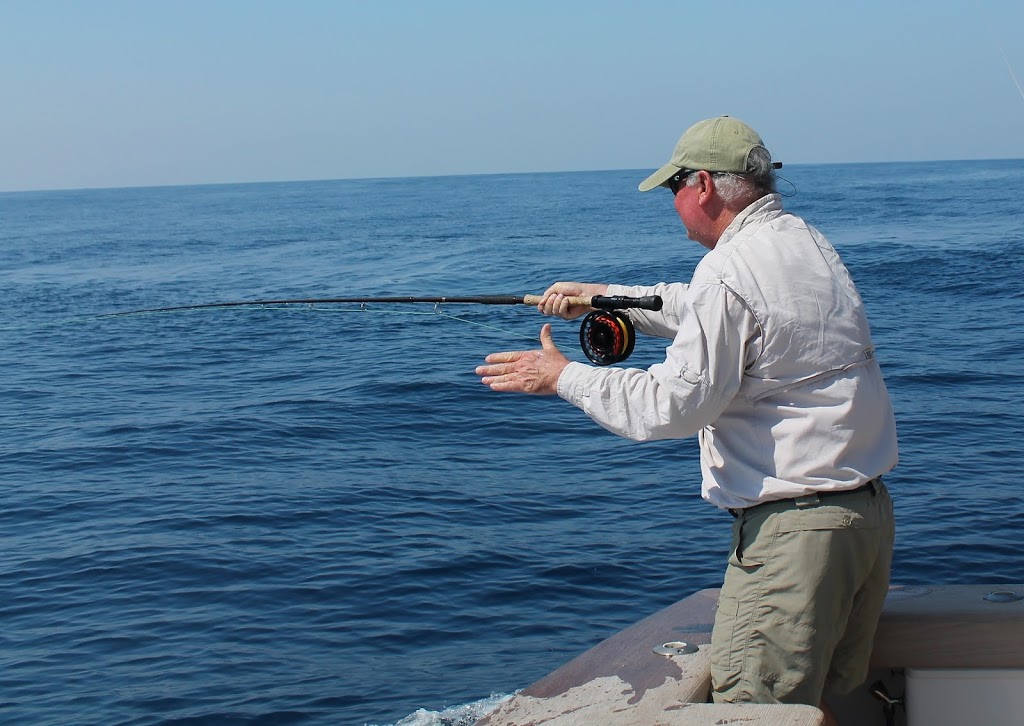 Smith controlling the the drag and the reel is dumping…. 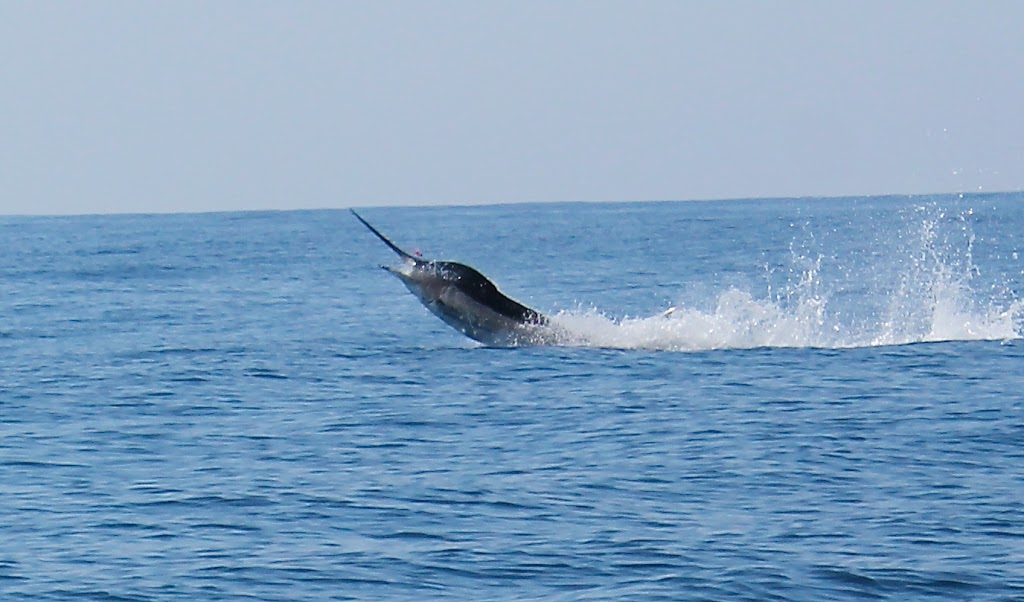 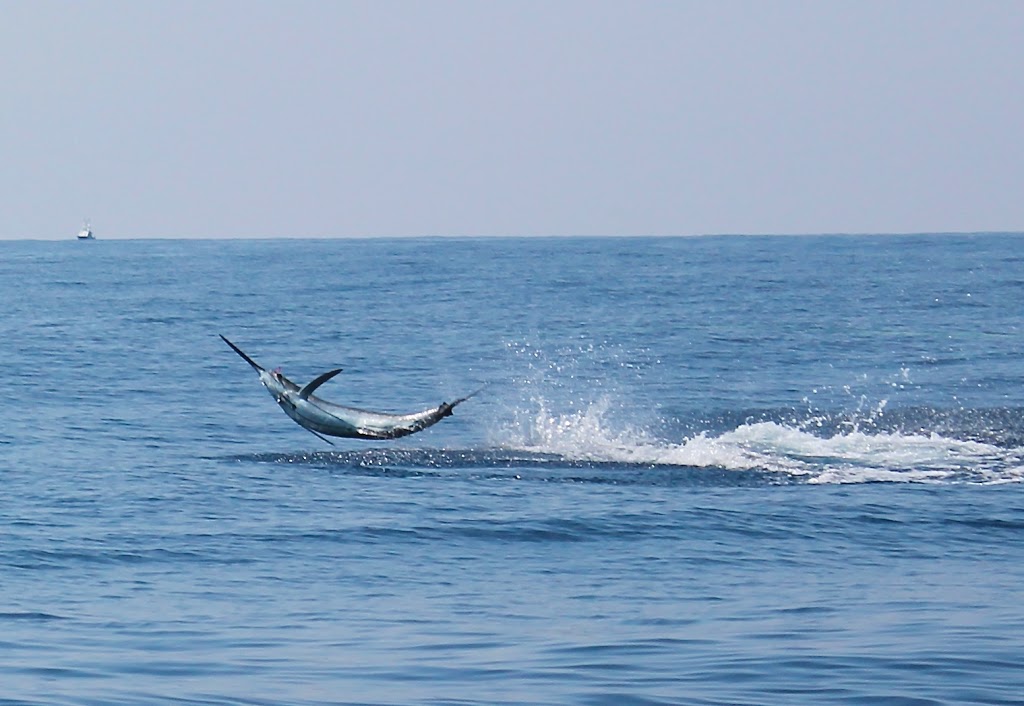 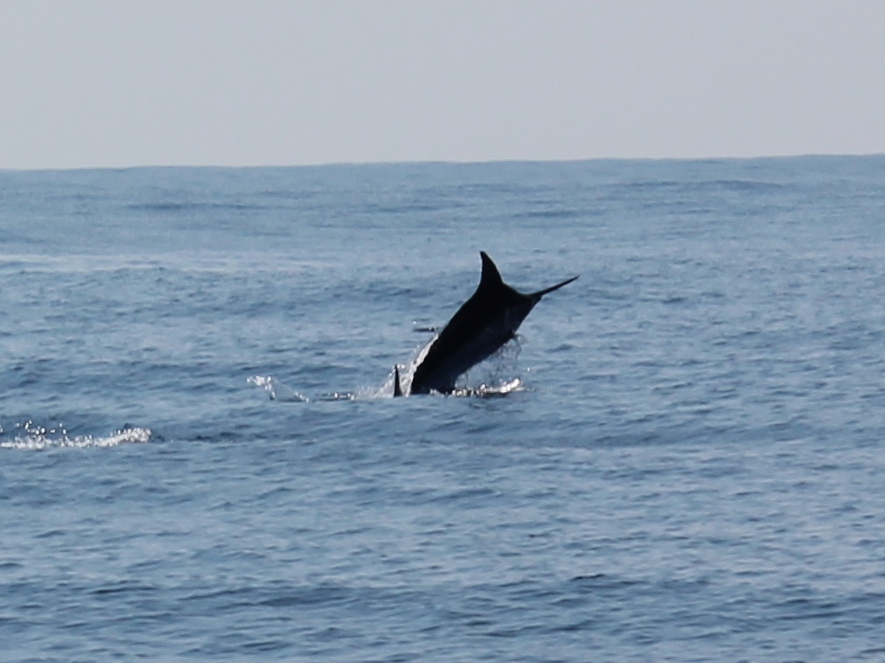 We survived the initial fireworks with some great fishing by Smith controlling the drag as needed. Putting the heat on when the fish was settled and getting angles on it, at the 1hr 45min mark we got within inches of the ‘legal’ release. The fish headed south again and at 2 hrs and 10mins she came up greyhounding as if she’d just been hooked, making a semi circle in seconds the resulting belly in the line proved too much and the 20lb tippet parted. What a fish and what an effort by Smith, unlucky, though still an experience they’ll never forget. 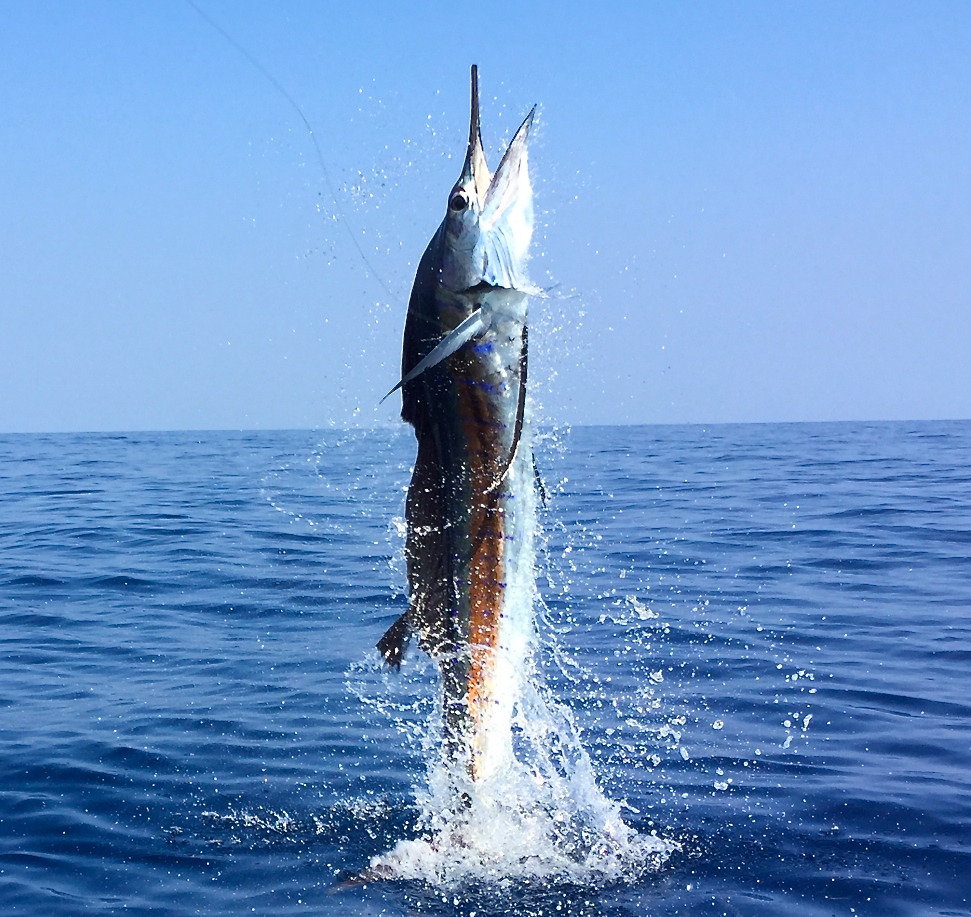 Over the same time period fishing February 2-3-4 we welcomed to the lodge regulars J Godwin, Scott Kozak, Bill Easum and Bill Evans. Fishing aboard the Captain Hook these guys were on them and the fish were snapping on the baits. Some days started slow but the afternoon bite was inevitably red hot. For their 3 days of fishing they raised with Capt Eddie 170 odd sailfish and released 110 from 147 bites. That there is some great averages….these guys are good!! 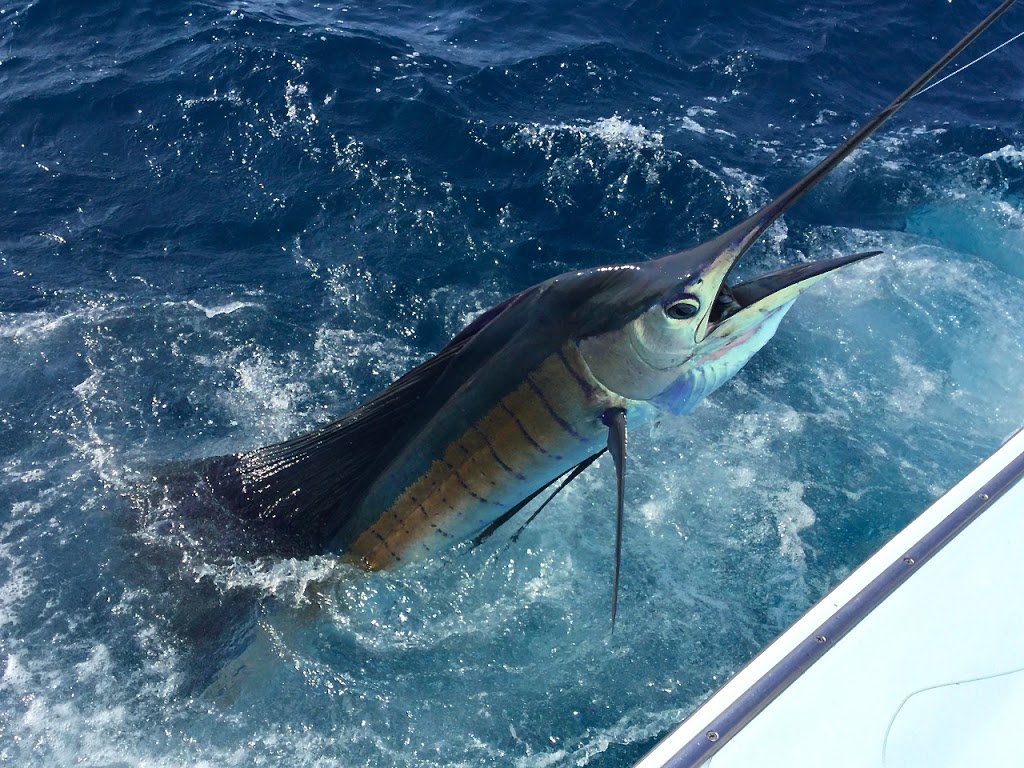 Thanks for the great shots J Godwin!! 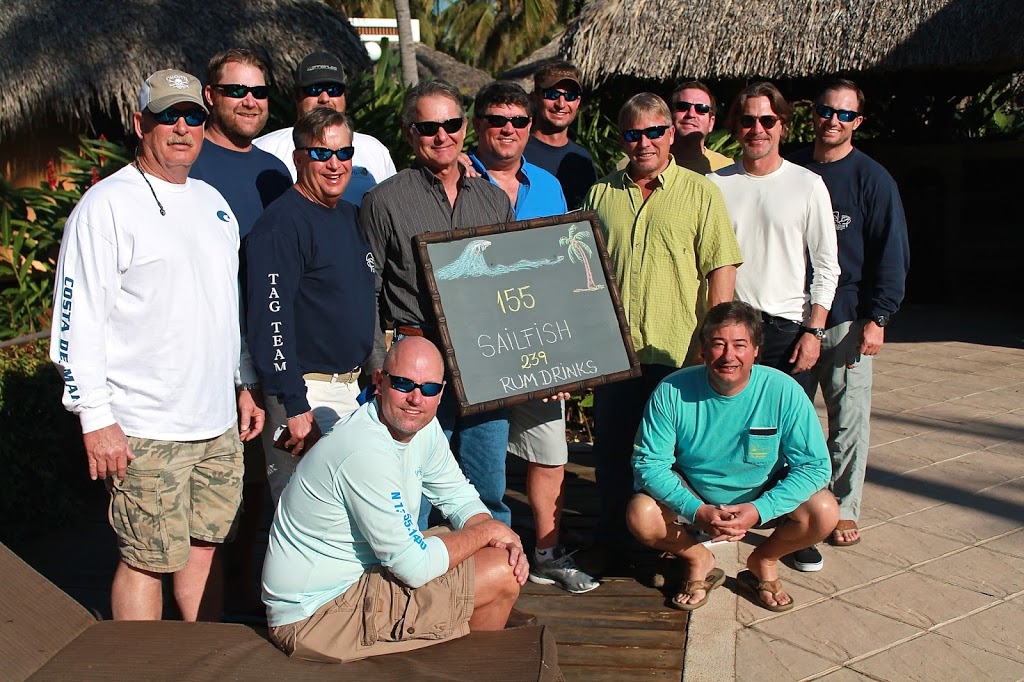 The Mark Thibault organized group with Colin Ocker, Paul Kennedy, Richard Marshall, Randy Wendel, Cody Jordan, Brent Smith, Ken Culbreth, Jonathan McComb, Bill Cohen, Kirk Tucker, Mike Griffith, Blaine Weaver and Mike Lemker.
February 5-6-7 we welcomed back our favorite group for Super Bowl weekend. The core group of these guys have been coming down here now for the past 5 years and it’s always a blast. As the board says, they released 155 sailfish from 236 bites, which are pretty good averages, there were also several blue marlin raised and big baits pitched, though no luck there…… They also polished off 239 rum drinks from 239 pours….which is 100% and 3 more than their bites……That’s not including the Crown Royal’s, Gins, Vodkas and Ilegal Mezcals……
To the fishing. We’d been on this bite and it was on the wane, though still worth the effort to chase them as they moved further to the east and further offshore. Thing is, when it had been as hot as the bite had been it is always going to be tough coming into a bite on the backside with expectations high. The fishing was still very good, though compared to the previous weeks crazy numbers……..
Fishing aboard Allure II, Captain Hook, Makina and Pica Pleitos the guys got into good fishing each day with the highlights on day one going to Pica Pleitos who went 21 from 28 bites. Day 2 went to the Capt Hook with 18 from 29 bites. From there on in it was looking elsewhere as the body of fish we had been on the previous 2 weeks was now not worth the chase…..
On our last day out all the boats went their own way looking for a new bite, Allure II went out wide to the west and found plenty of this: 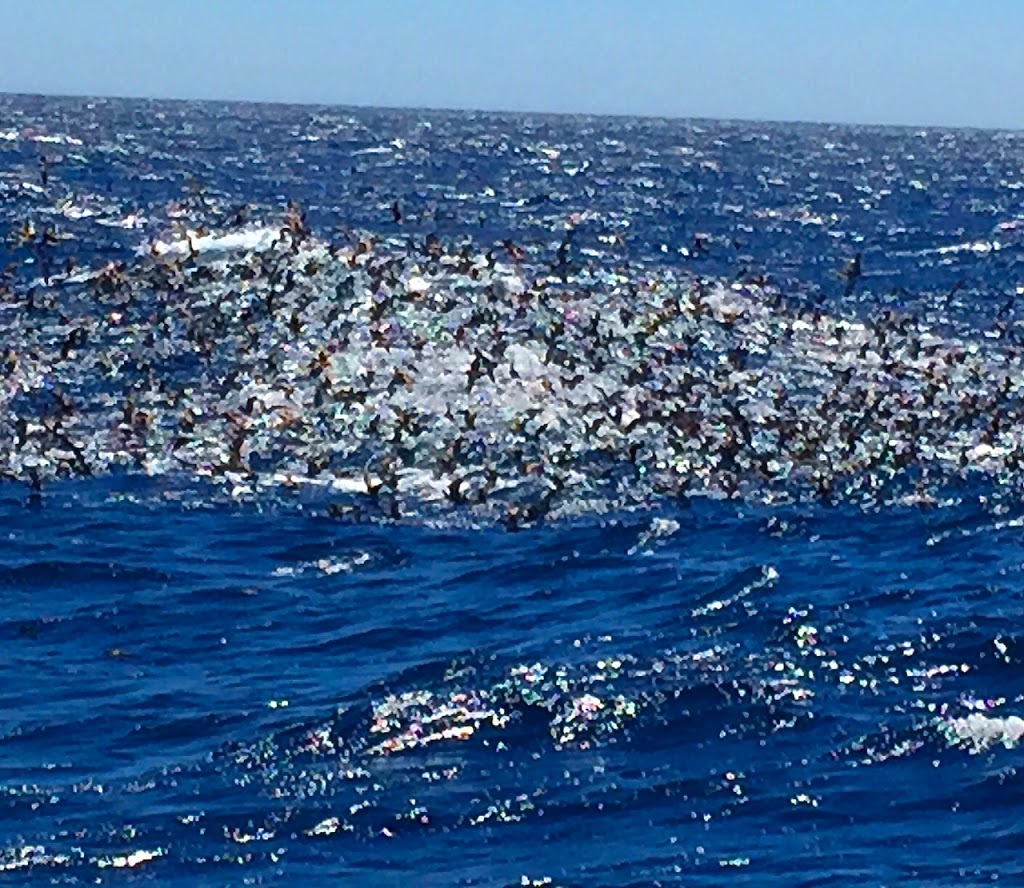 Massive work-ups of bonito’s, literally thousands of small bone heads surfing down the waves from the stiff ENE winds. Big slicks, whales, birds and life, amazing stuff…..though more amazingly…not much going on in the way of billfish bites. We worked them and went down the edge eventually finding some bait balls down deeper on the sounder and for the late afternoon the billfish bite was very good. Having just one release at 1:30pm the guys did great in the last hour and half of fishing to release 11 sails from 17 bites and missed a wahoo that chewed through the leader for Allure II to take the 3rd day. 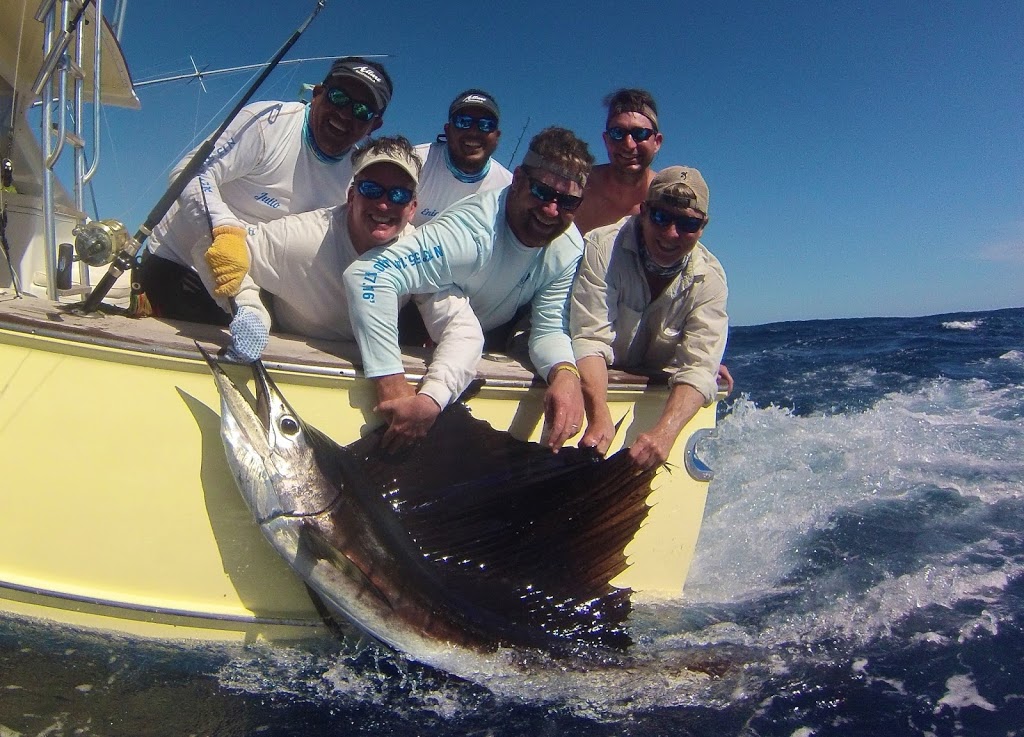 Ken Culbreth, Blaine Weaver, Jonathan McComb and Randy Wendel with the mates..
Super Bowl Sunday was a blast, we had an awesome dinner and an great last night down the lodge watching the big match. Good times!!!
Beautiful deep blue water, bait, slicks, whales, all adds up to one thing….the fish are out there. With that much bait, they’ll soon be back on the chew. This season is for sure shaping up to be a beauty. Get down here and get into it. We have a selection of great boats to choose from, no worries…
liz@sailfishoasissportfishing.com
Cheers!