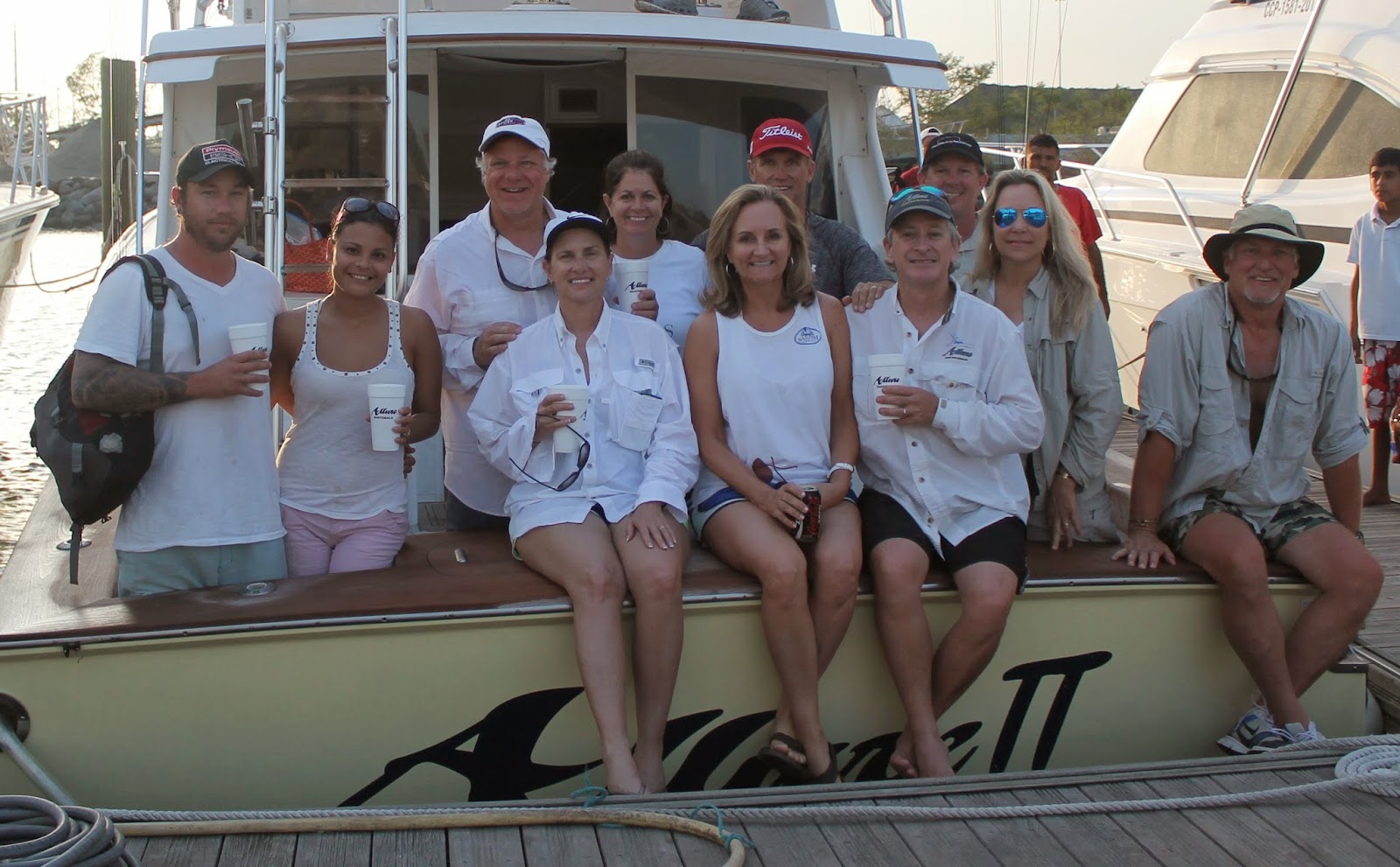 Brian and Tamara, Brad and Melissa Kangieser, Donelle and Hill Dishman, Sara and Larry Tharp, Richard and Rhonda Brown with Trey Strake.
February 6th-7th the above group had spent the week drilling a water well in the Masagua District, a great cause for a village that needed it with the folks from Living Water. After a good job well done they spent the last 2 days down here out on the Pacific experiencing some awesome fishing. On Allure half the group were conventional fishing and had a hot bite releasing 32 sails from 43 bites!! On Allure II we concentrated on the fly releasing 7 from 11 bites and another 11 from 18 bites on the baits. Great day!! 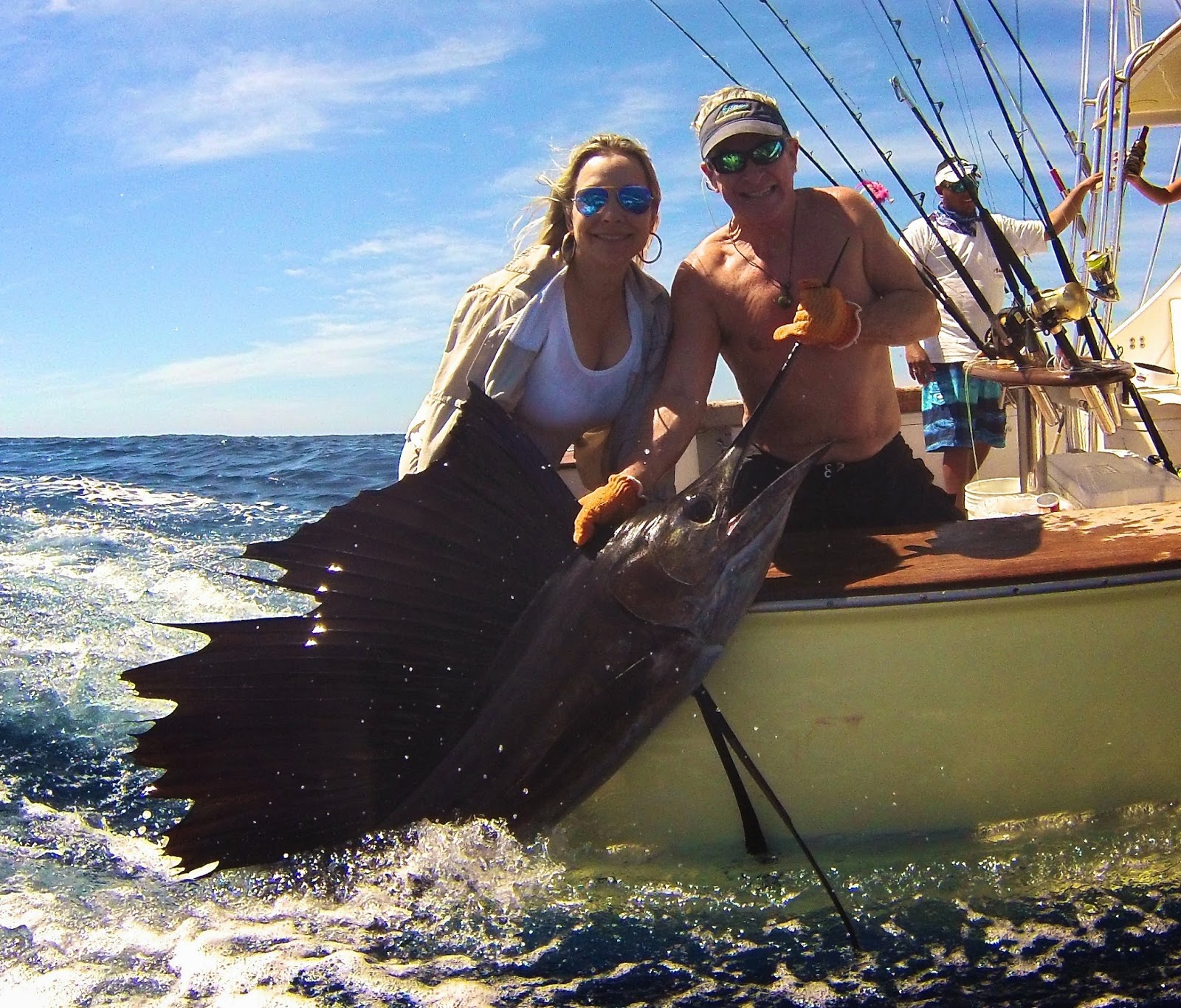 Rhonda Brown and Hill Dishman with a big sail…
2nd day out half the crew opted for a day in Antigua while the boys were back out on Allure II, a little slower today and a few sancochos though a brilliant time had by all with 33 sailfish raised in the spread and 16 releases from 29 bites. We also raised a blue on the teaser that came in deep and strong though sat under the pitch bait…. 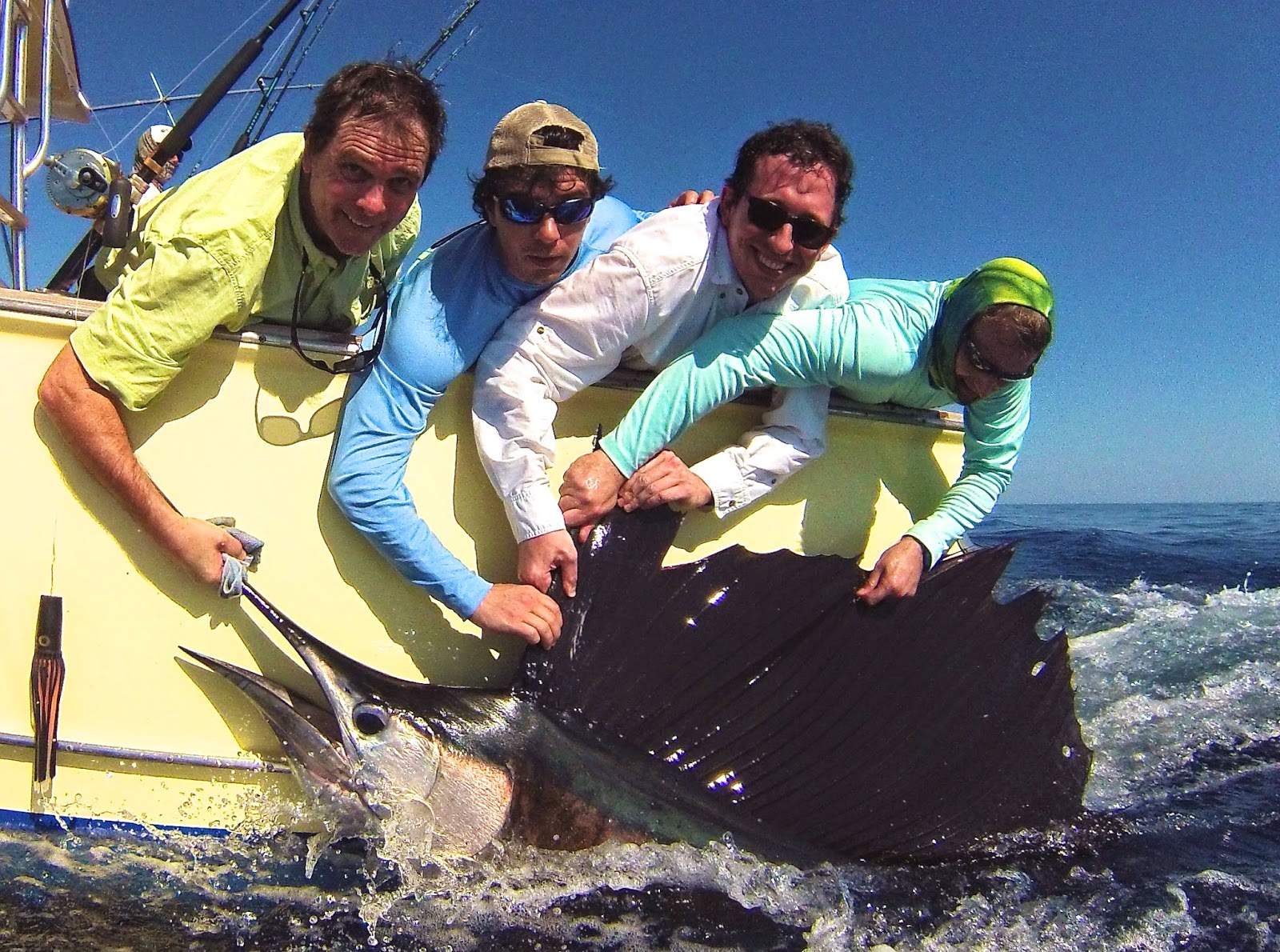 Joe and Lee Golias, Rudy Reynolds and Steven Dahl
February 8th and 9th we welcomed back Joe and Lee Golias, this time with new comers Rudy Reynolds, Steven Dahl and Matt Kurgosion along with the crew from last year Austin and Robert Dishman and Guatemalan stalwart Curtis Thorpe. Mixing it up between Allure and Allure II we had Curtis, Austin, Robert and Matt on Allure II the first day trying on the fly, the other half were on Allure conventional fishing. In the same area at the top of the western corner we got into some fish that were a little tough on the fly and just had a few bad luck breaks releasing 1 from 8 bites, on the baits we released 3 out of 4 bites. Allure on the conventional tackle released 11 from 19 bites… 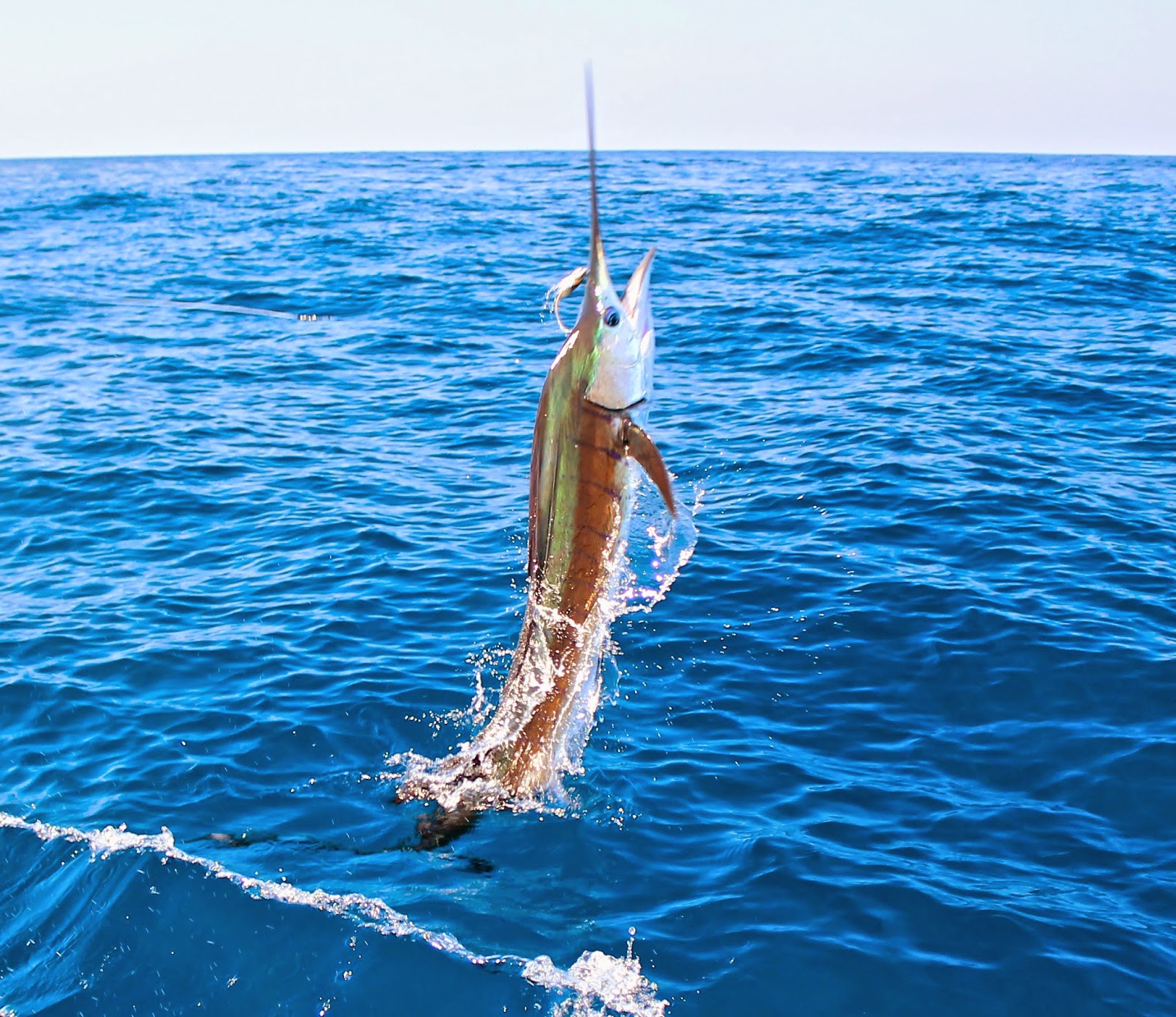 The next day noticing good water com in from the east we went out that way and it paid off, the fishing was great, we had a blast with the guys baiting some hot fish off the teasers and did a very good job hooking their own fish. We had reversed the crews on the boats and on Allure II we raised 43 sails, releasing 24 from 35 bites, some hot fish and big girls too!! On Allure the guys on the fly had a blast also releasing 3 on the fly including a double header and 6 on the baits, on top of that they raised a 350lb blue marlin that came in hot and got an awesome bite on the pitched mackerel. Tagged and released for Curtis Thorpe, way to go Curtis!! Next time make sure the battery has some juice in that go-pro……!! 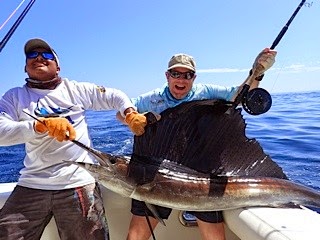 And congrats to Austin for his first sail on the fly! 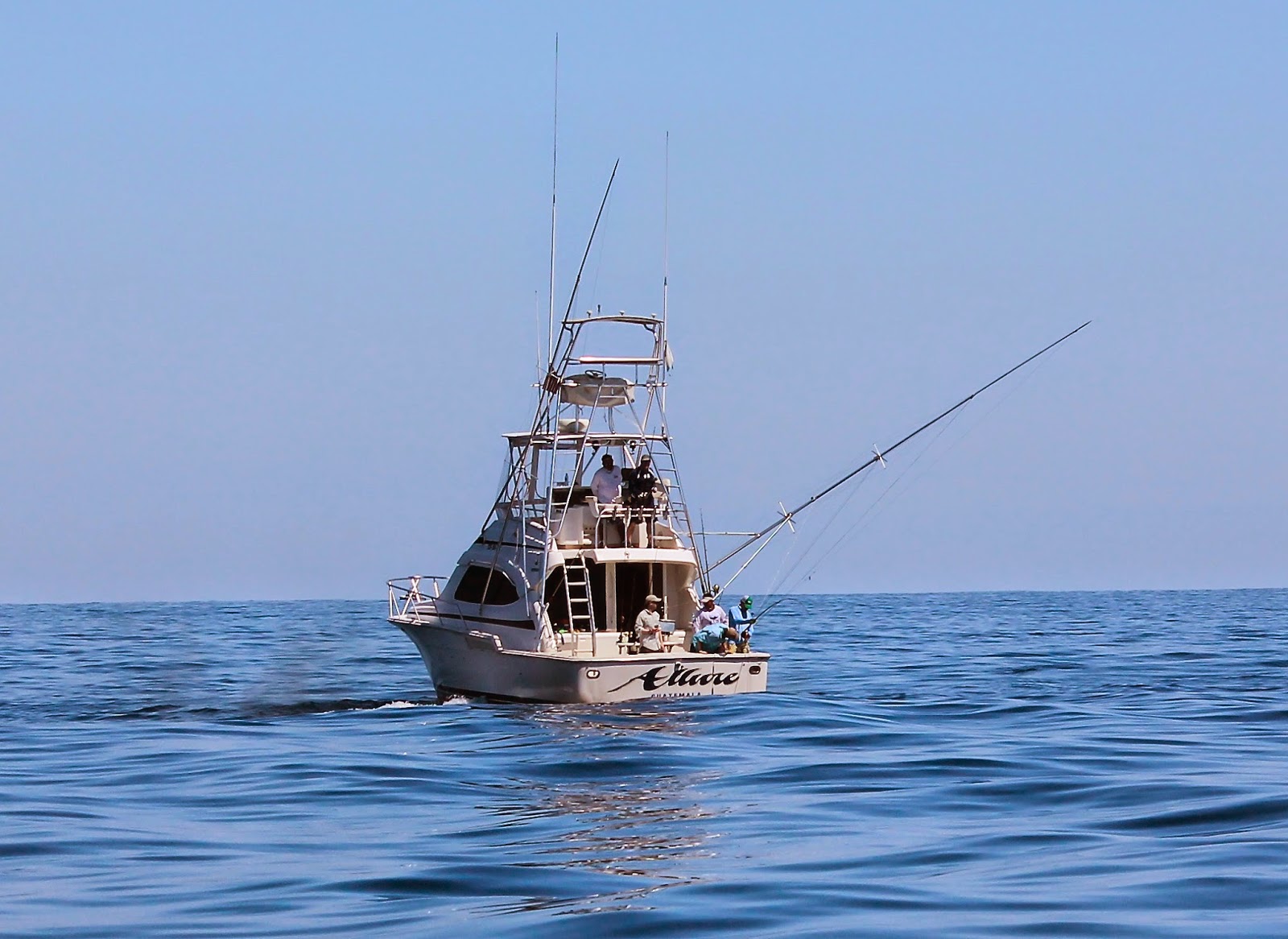 Allure on a stubborn sail on the fly. 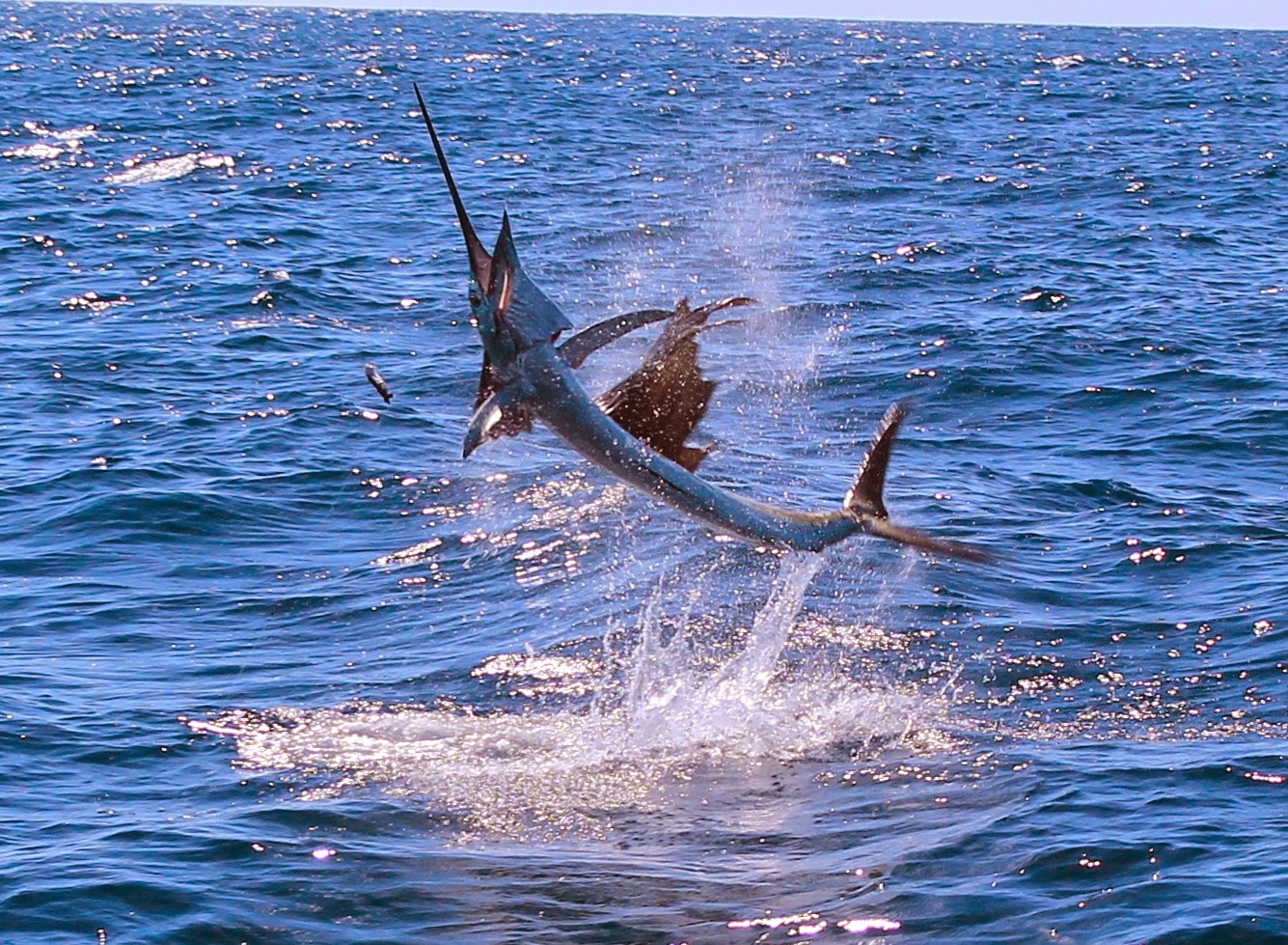 February 14th-15th Hugh and James Donlon came in to the OASIS along with Zac Henderson and his group. Very sporty conditions out there and half the Henderson group opted to play golf at the amazing La Reunion Golf course on the side of Volcan Fuego. A great time for them and the other guys teamed up, conditions laid down nicely by the afternoon of the 2nd day and we had some good fishing. A few lessons for Hugh and James and a few sancochos though all good, we also got into several groups of spinners and boated plenty of good sized yellow fins as well as a 20lb mahi.. 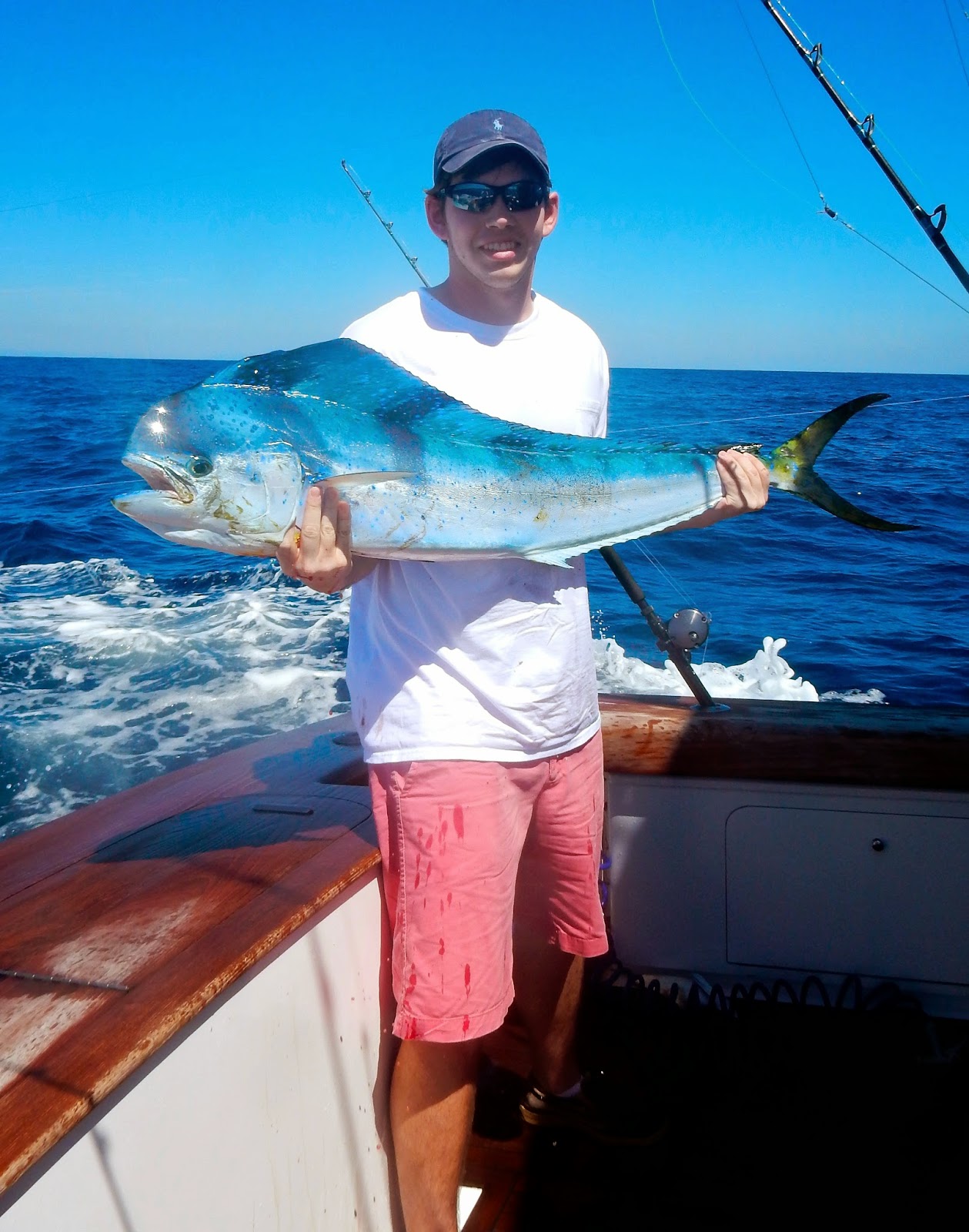 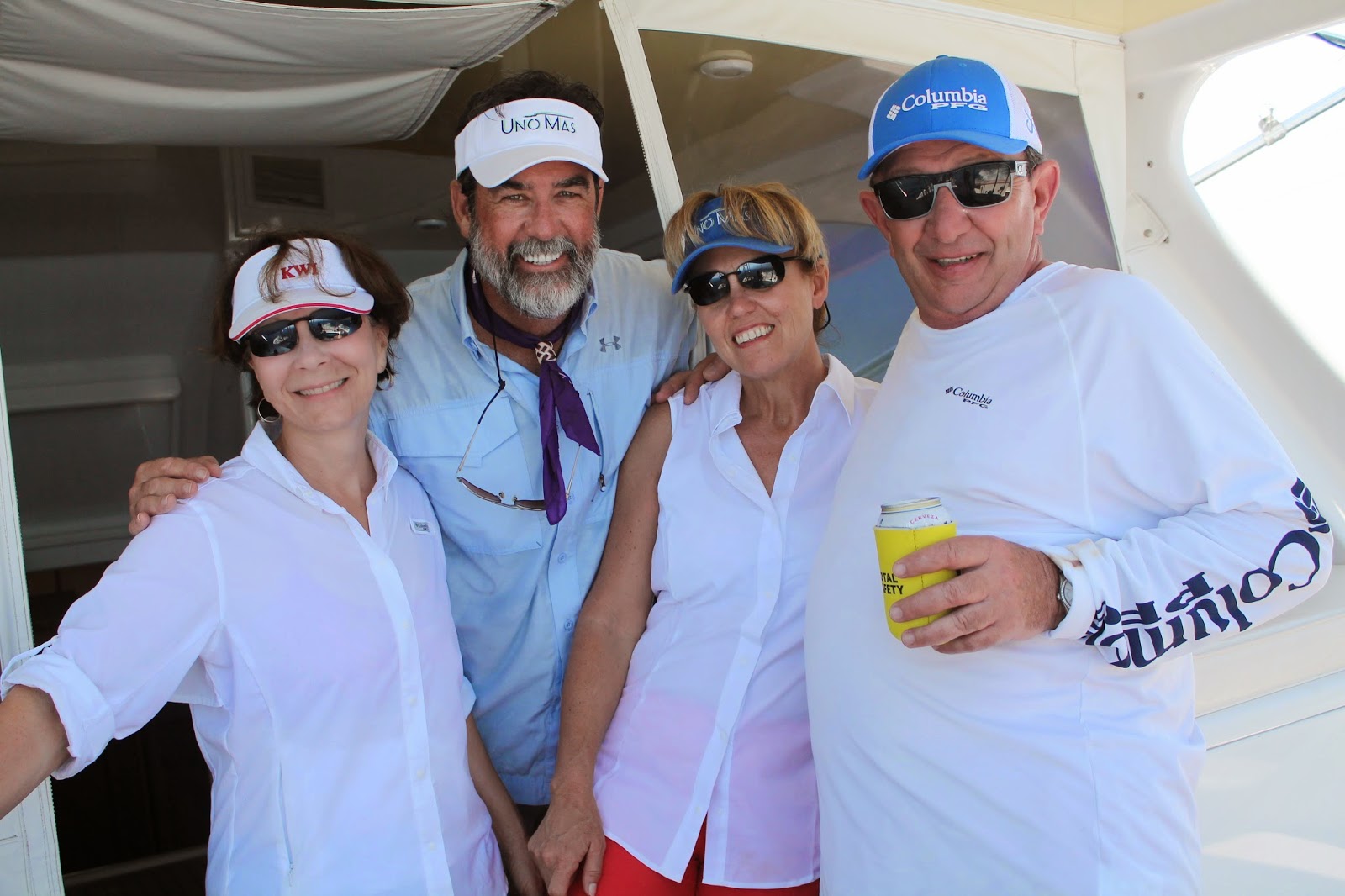 Chris Foret, David and Diane Fanta, James Foret
February 16-17-18. Great to see David and Diane Fanta from Port Aransas back down here, this time introducing James and Chris Foret from Louisiana. We chased a beautiful body of warm blue water to the west the first day with not very good results, conditions were as advertised, deep blue water a few degrees warmer than to the east though no one home!! Back to the east the second day and we were into them from there on in. Conditions were perfect out there with flat seas, we had a blast with this group and they fished well, missing few on the conventional and we changed to the fly on the last day getting 3 hot bites. Good times!! David just re-booked for mid April which is awesome and they are coming back as a team next year which proves what a good time was had… 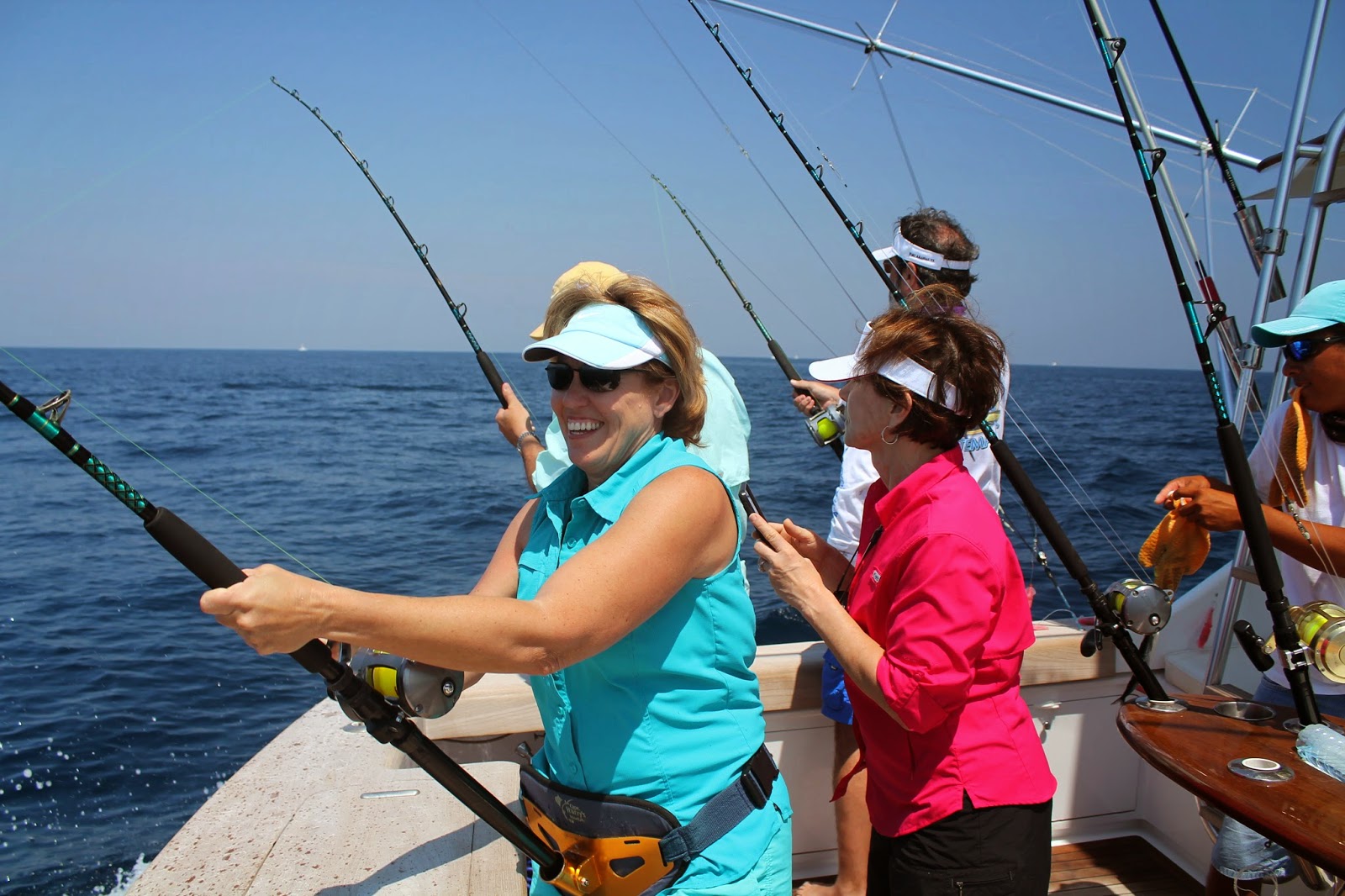 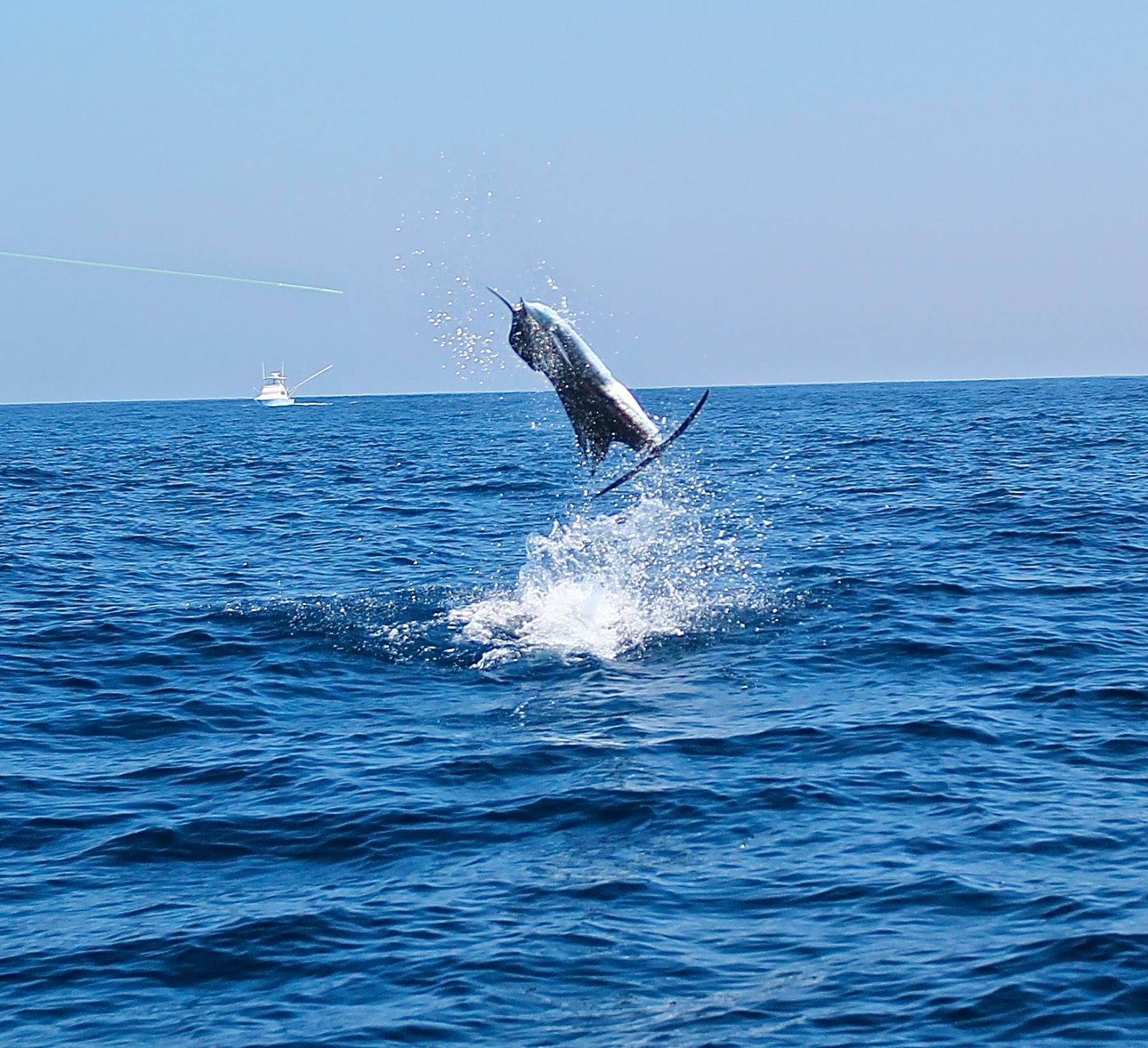 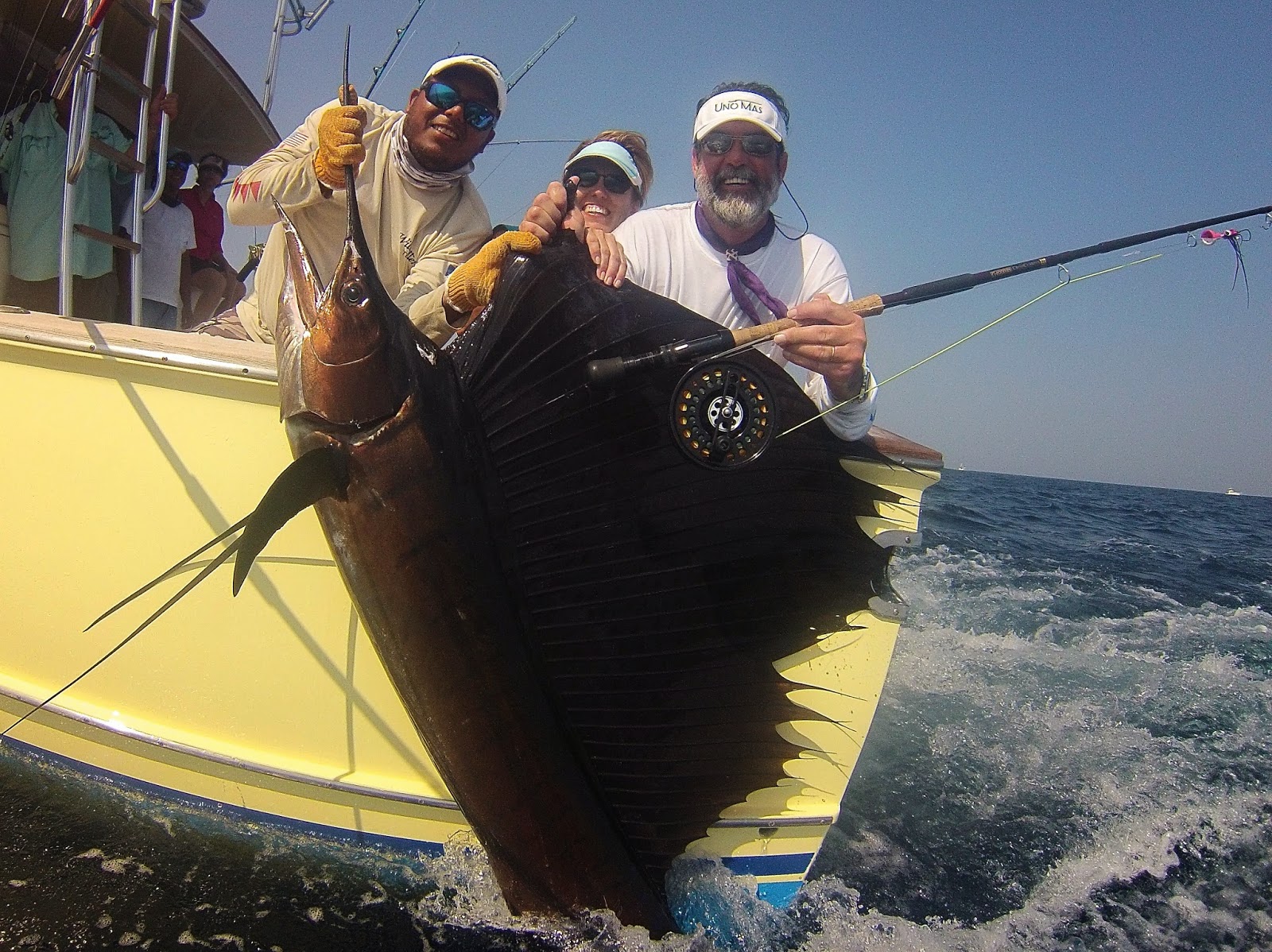 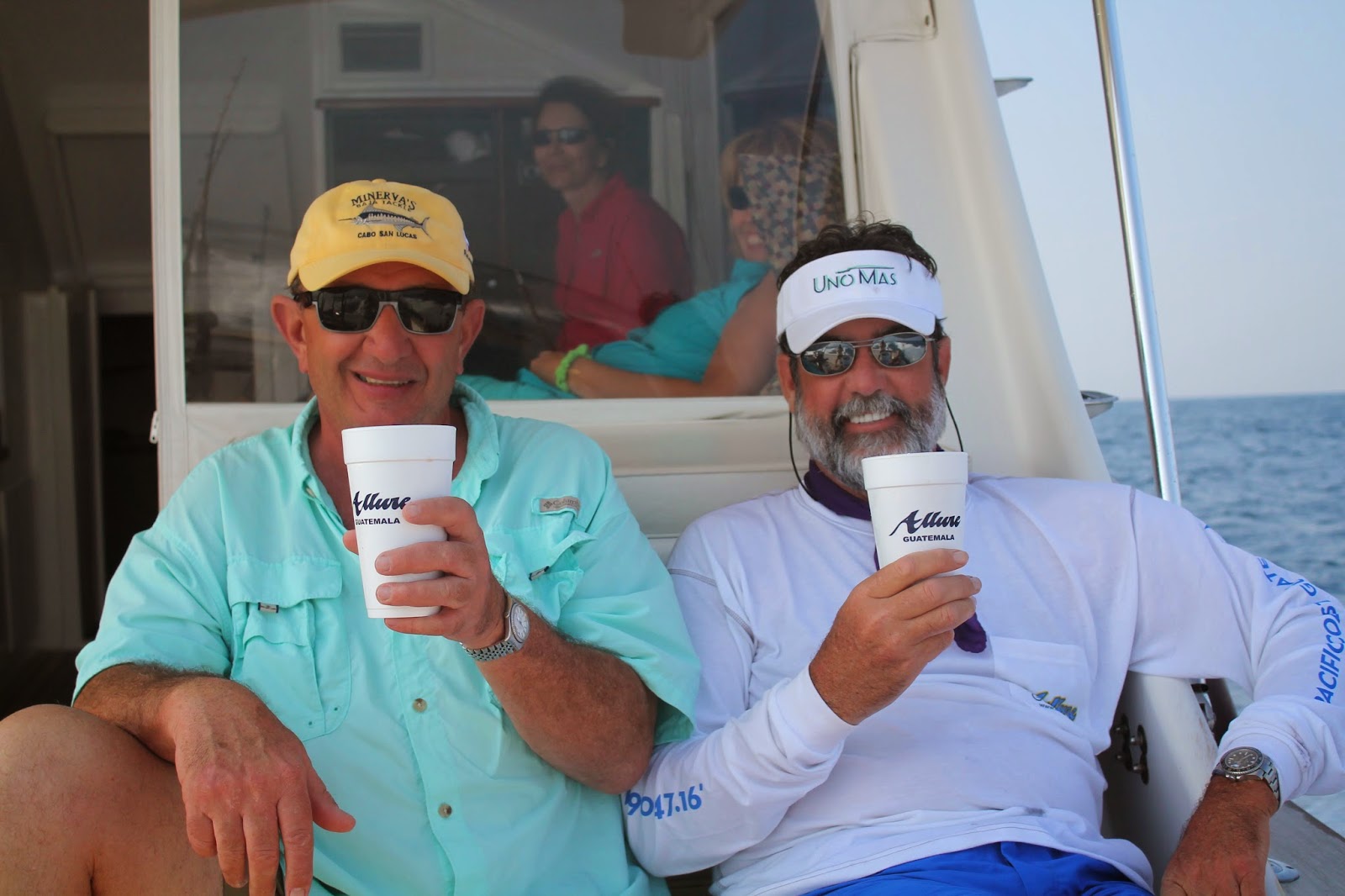 And enjoying the ride home 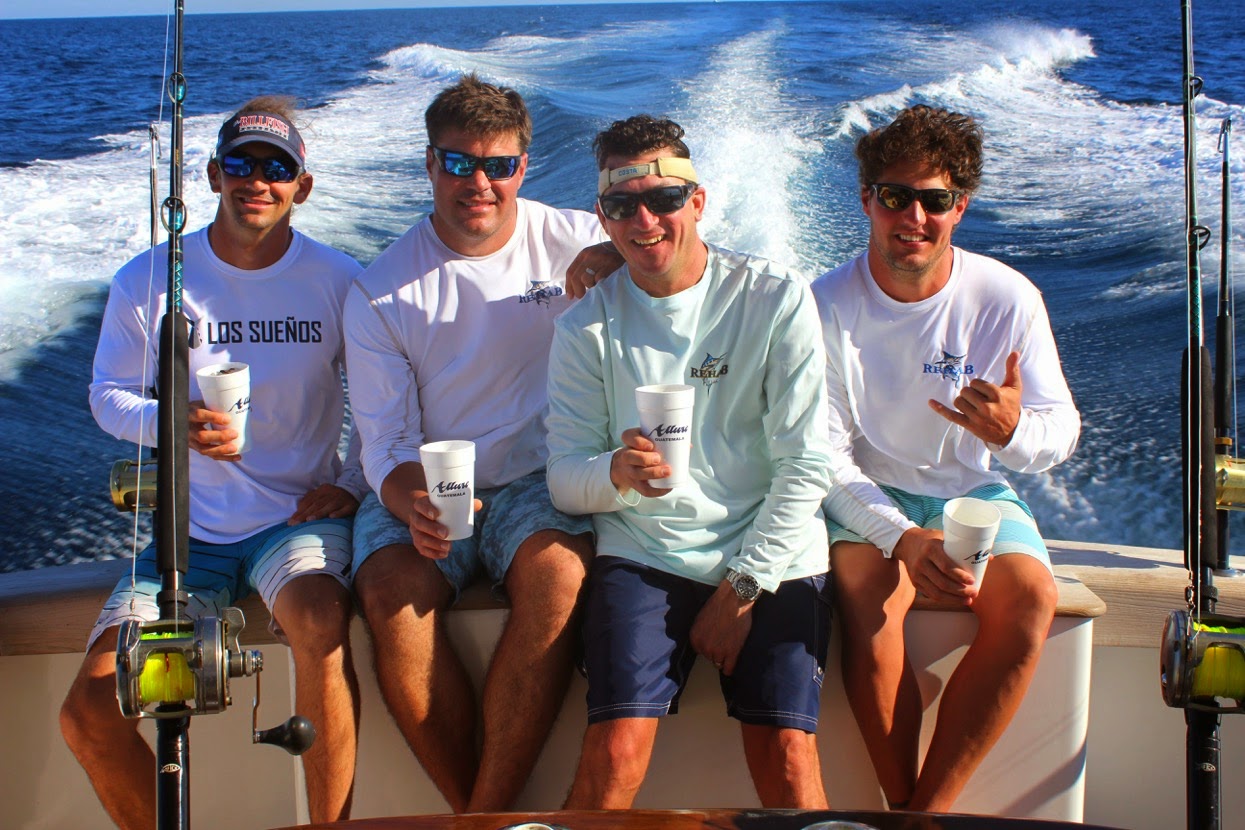 Gabe Goodman, Lee Bull, Chris Gavlick and Jasen Gast
February 20-21 it was good to see Jasen Gast down here for his 3rd trip in 3 years, this time bringing Team Rehab as above. Jasen owns Rehab, a 45ft Buddy Davis express, and the above crew fish hard in the Gulf, this year winning Houston Big Game Fishing Club top boat/angler/Capt/wahoo and swordfish. Needless to say they’re pretty handy. Had an awesome time with these guys too, fishing was a little on the tough side though still good enough!!. And a pair of nice 30-35lb mahi’s meant we were eating well. Check out this video that Chris Gavlick put together….wicked job Chris!!
https://vimeo.com/120511503
No need to say more, the vid says it all!! 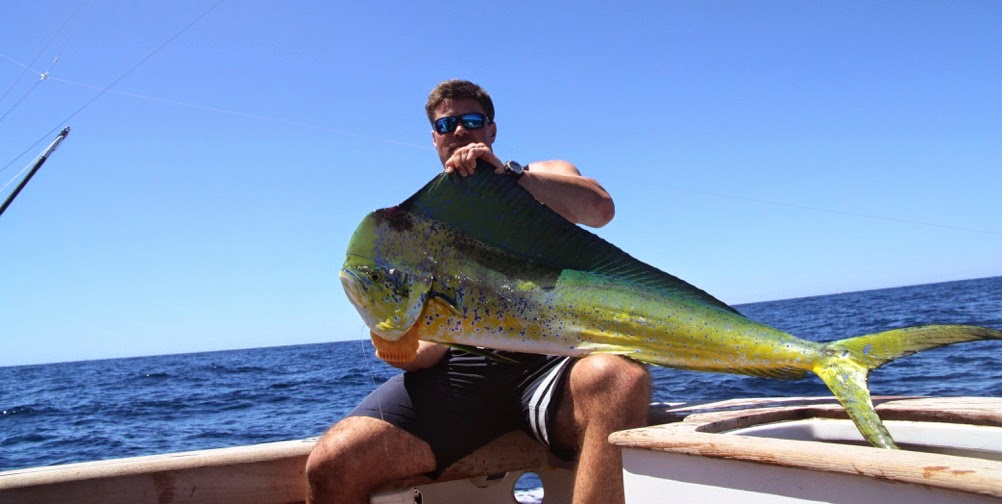 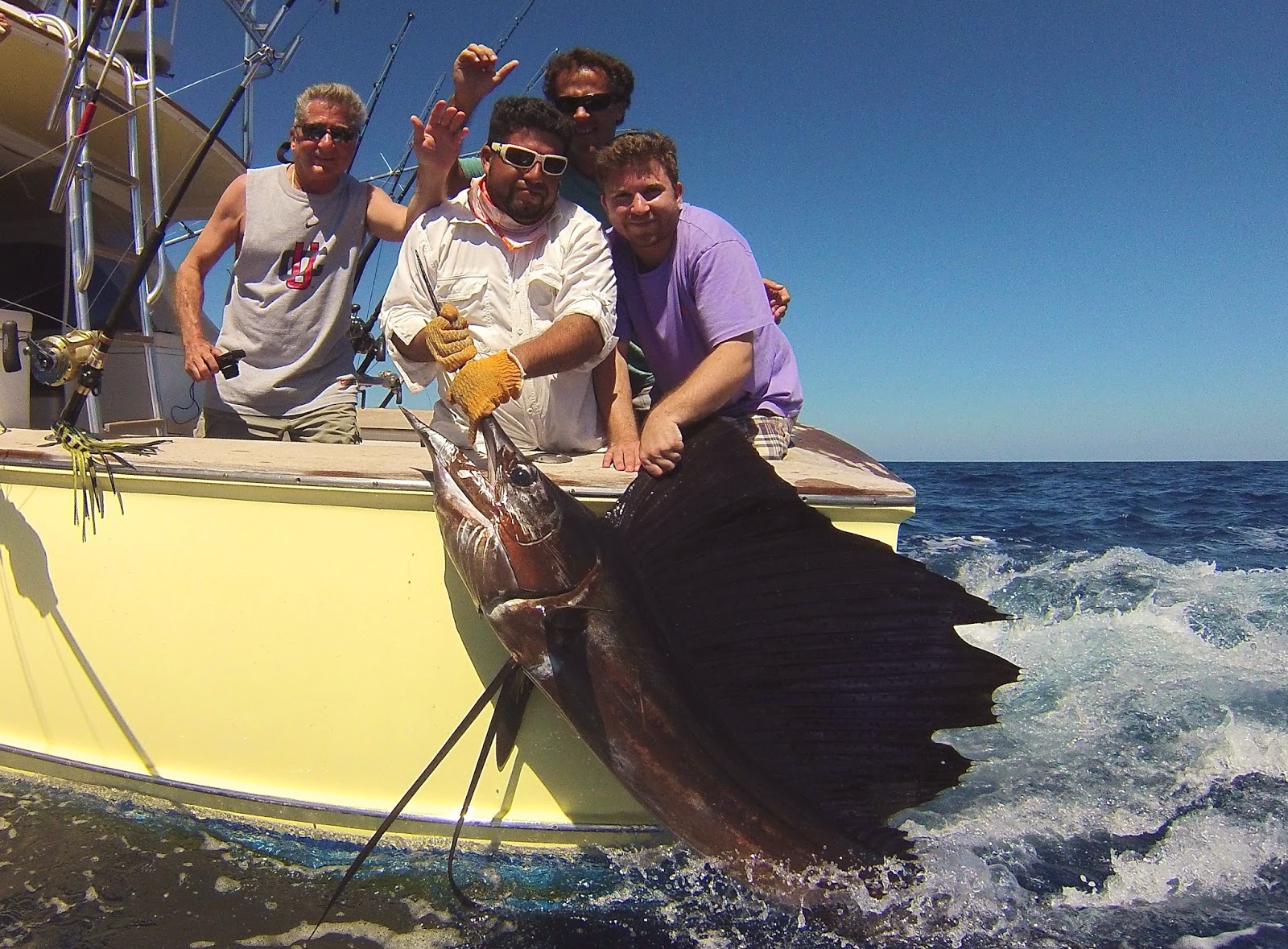 Harvey Gottlieb, Javier Burga and Evan Gottlieb
February 22nd and 23rd for their second trip to Guatemala Harvey and son Evan from Florida were back down with local and business associate Javier Burga. Good fishing their first day out with 19 raised and 11 released  from 15 bites… 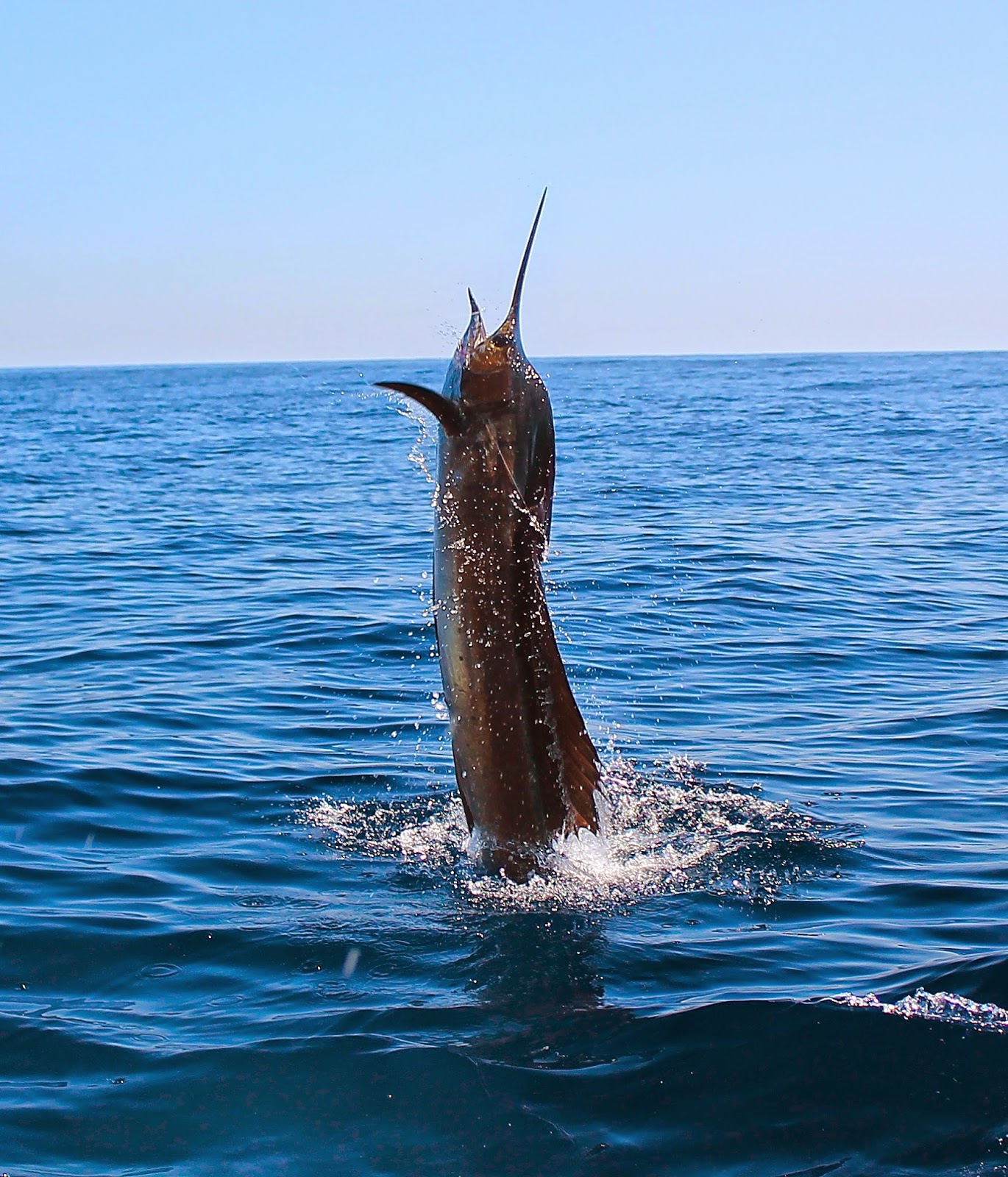 A request for tunas the next day had us scouting out far and wide, beautiful out there, deep blue water, plenty of bait though a lack of spinner dolphin and tunas. We never fished an area, always on the move looking and still raised 11 sailfish releasing 6 from 10 bites with Evan and Javier doing a good job on the pitch baits, baiting to fish off the teasers. We got attacked by a 50lb ++ bull mahi out there that stormed the spread though we missed him…..big bull!!! 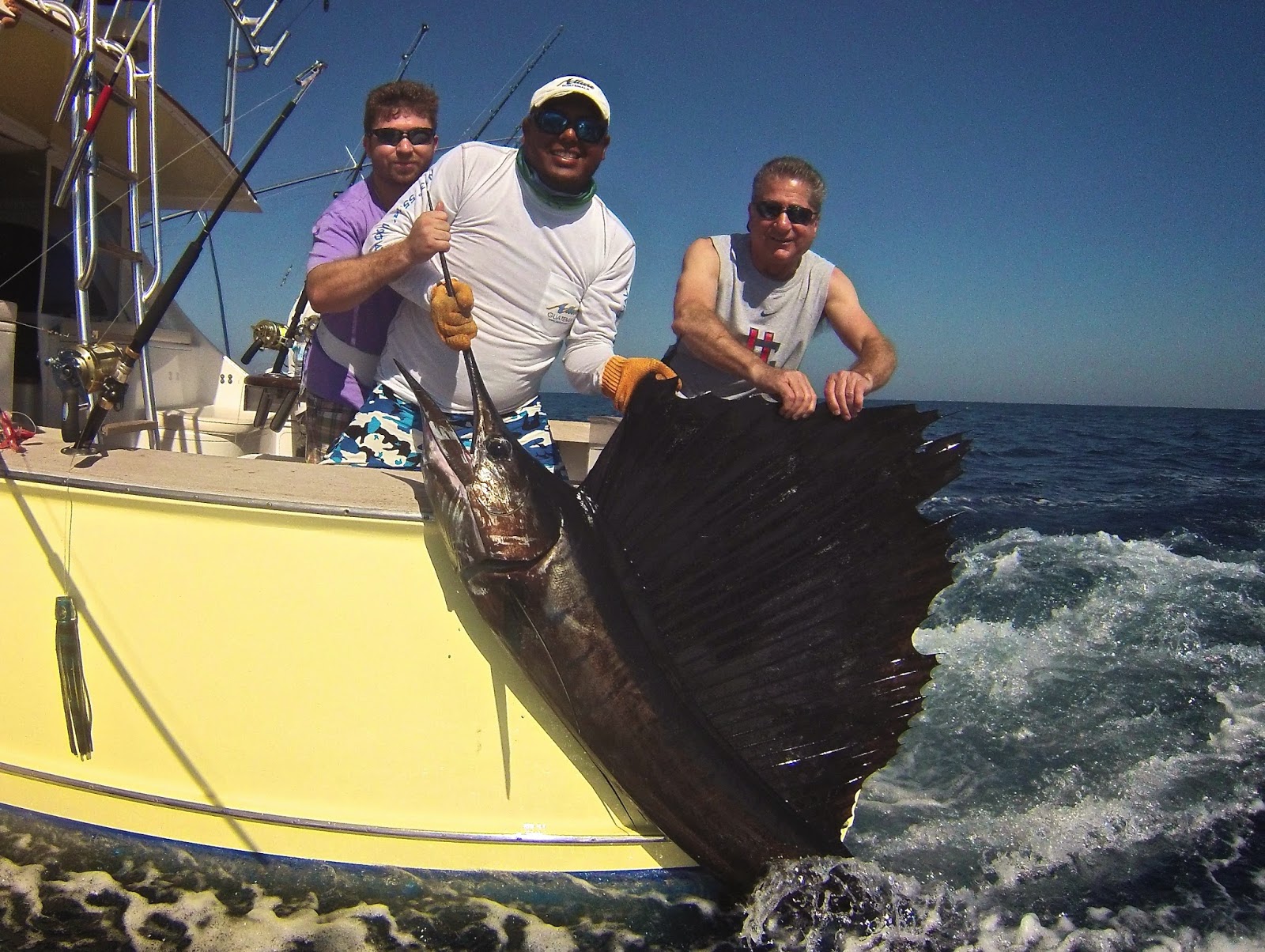 And last fish of the trip for father and son team..
We took some time off  middle of the month heading to the Miami Boat Show and then on Friday night to The Billfish Foundation awards dinner and ceremony collecting Sailfish Release in the Pacific award and Overall Release category. Had a blast and went home with a hangover….. 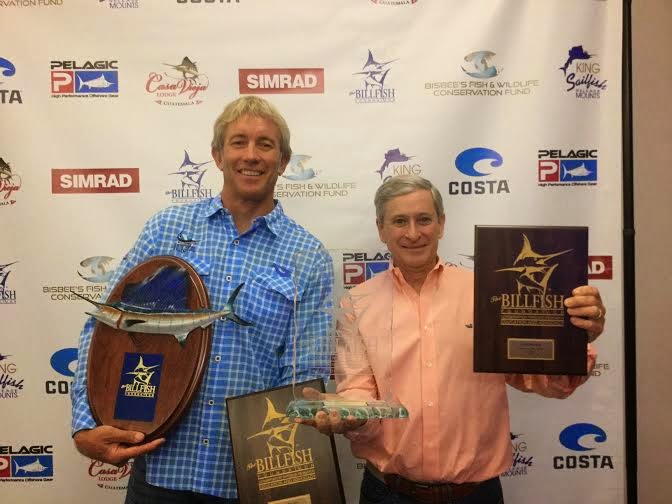 With owner Hill Dishman, good times!
We have limited availability from here on in though still a weekend in March which is unheard of, March 6-7-8 which is a Friday, Saturday and Sunday is open due to a cancellation and can be bought at a steal, great last minute deal!! Also March 30-31 and April 1 and 2 are open. April has just about booked out and now we look forward to May and onwards. We had some very good fishing right through to mid September last year, the blue marlin normally come through from late April right through to November. Add plenty of mahi’s, tunas and of course the sails were biting right through last summer, good fishing to be had here in these months and not to be forgotten about!
Contact: liz@sailfishoasissportfishing.com
Cheers!