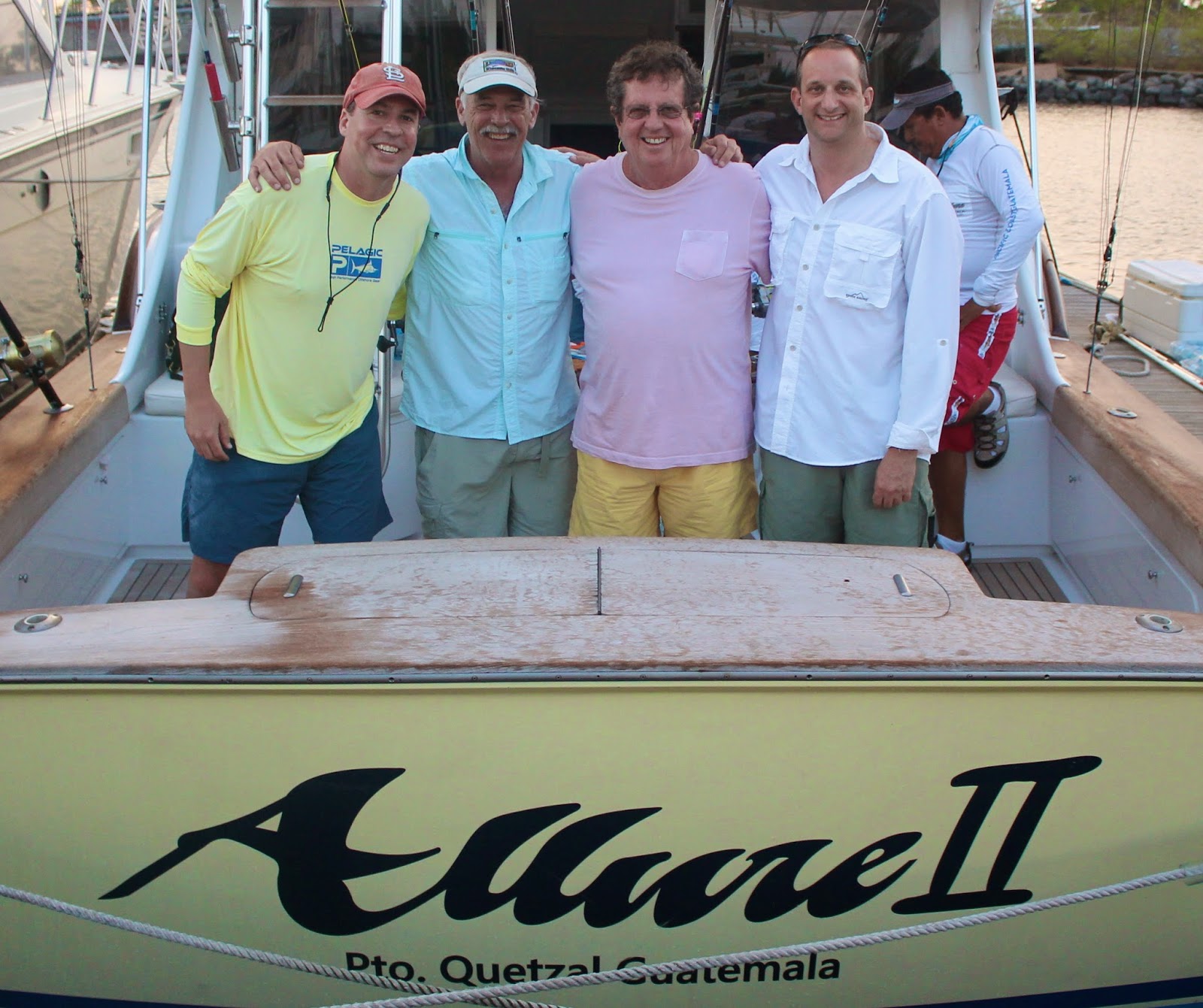 Sumner Charles, Brian Shinkle with Tim and Terrance Lonsdale
January 22-23-24-25 it was great to welcome back Brian and Tim this time with Brian’s nephew Sumner and Tim’s son Terrance. Both have fished Guatemala before so we had a good experienced crew out there. The runs were long though worth it with steady sailfish action with 20+ bites a day as well as getting into the tunas pretty thick. By day 3 we were on to the sailfish raising 33 in the spread and releasing 18 from 28 bites, with 40 releases under their belts for the trip we changed to the fly on day 4. The fishing slowed some though we still raised 20 sails teasing in and casting to 10, they all had shots with each of them releasing a sail on the fly with 4 from 8 bites and another 4 from 7 bites on the bait. A good trip and hopefully seeing the crew back here in April! Check out this beauty on the fly for Tim… 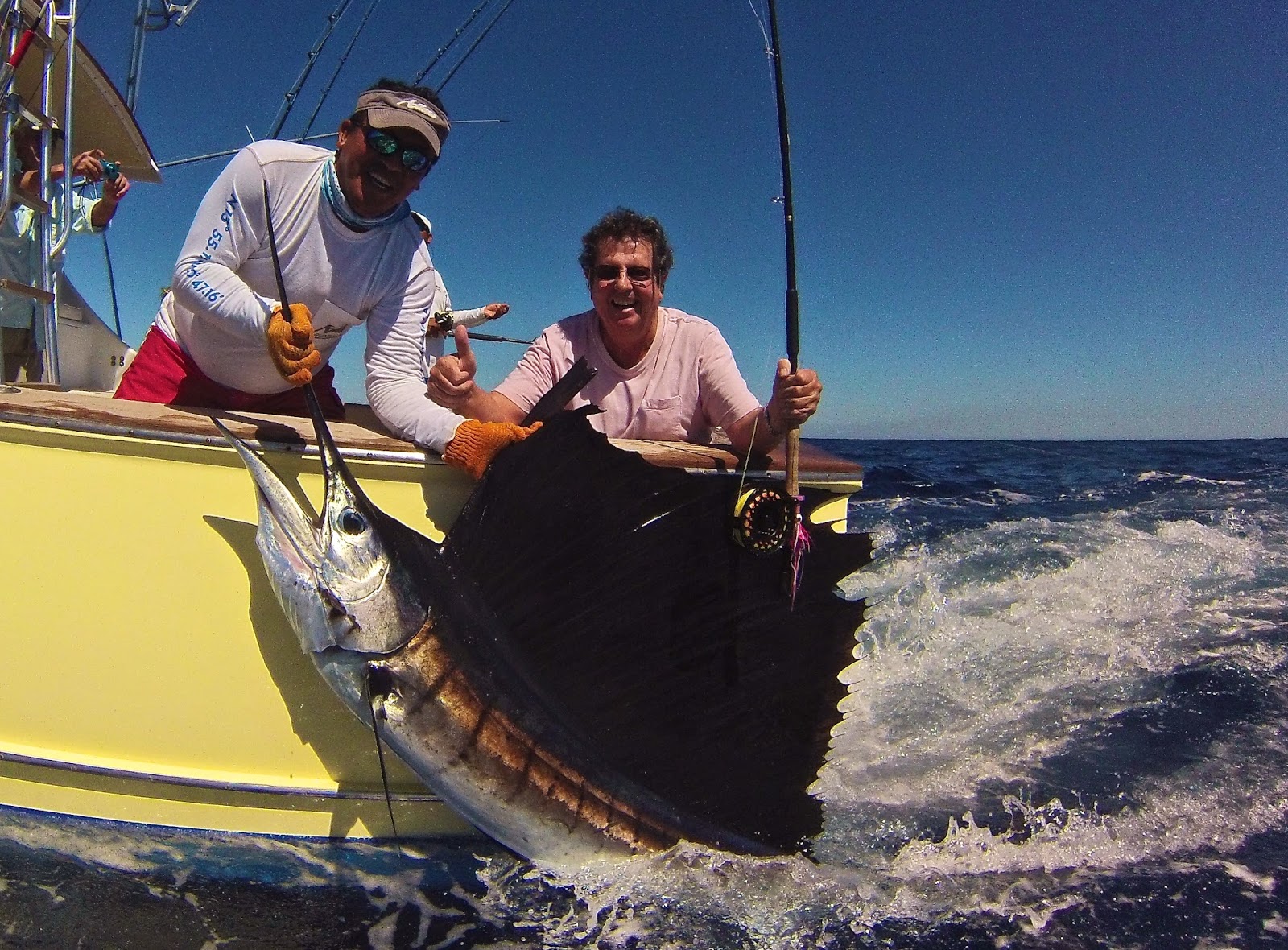 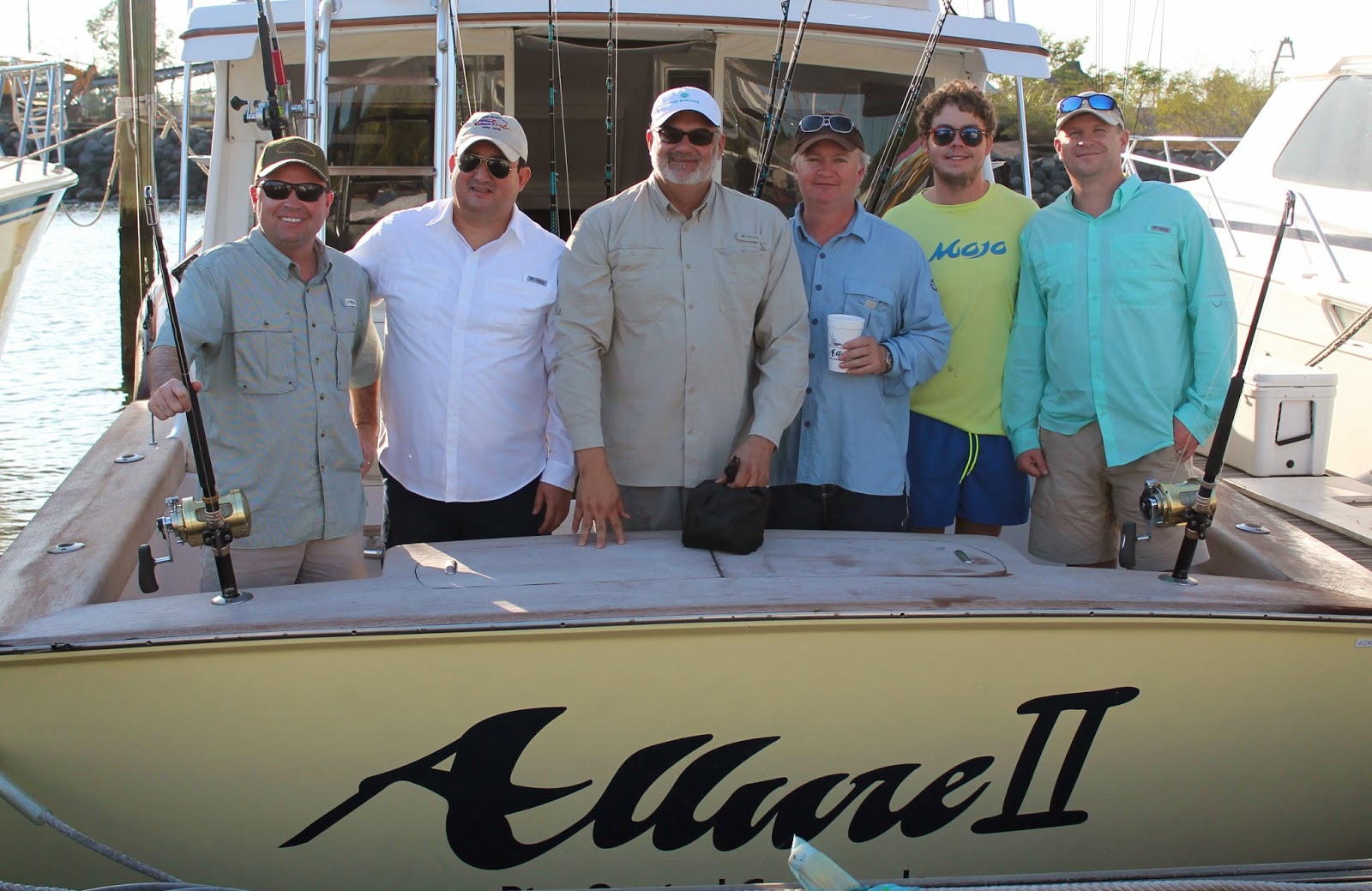 Brian Olsen, Eddie Arvizu, Scott McShan, Todd and Wells Johnson and Ryan McMinn
January 27 and 28th we fished with the above group from Houston, Texas. With a late start from the dock on day 1, the cold front blowing through and the fishing out at 45NM we fished the bottom of the pocket at 9-12NM all day. Beautiful blue water in there and a few marlin about though a bit slow with 2 sails raised, we missed one and the other didn’t bite, we also raised 2 blue marlin and Ryan McMinn tagged and released one of them, a tough fish on the 30lb of about 175lb…. 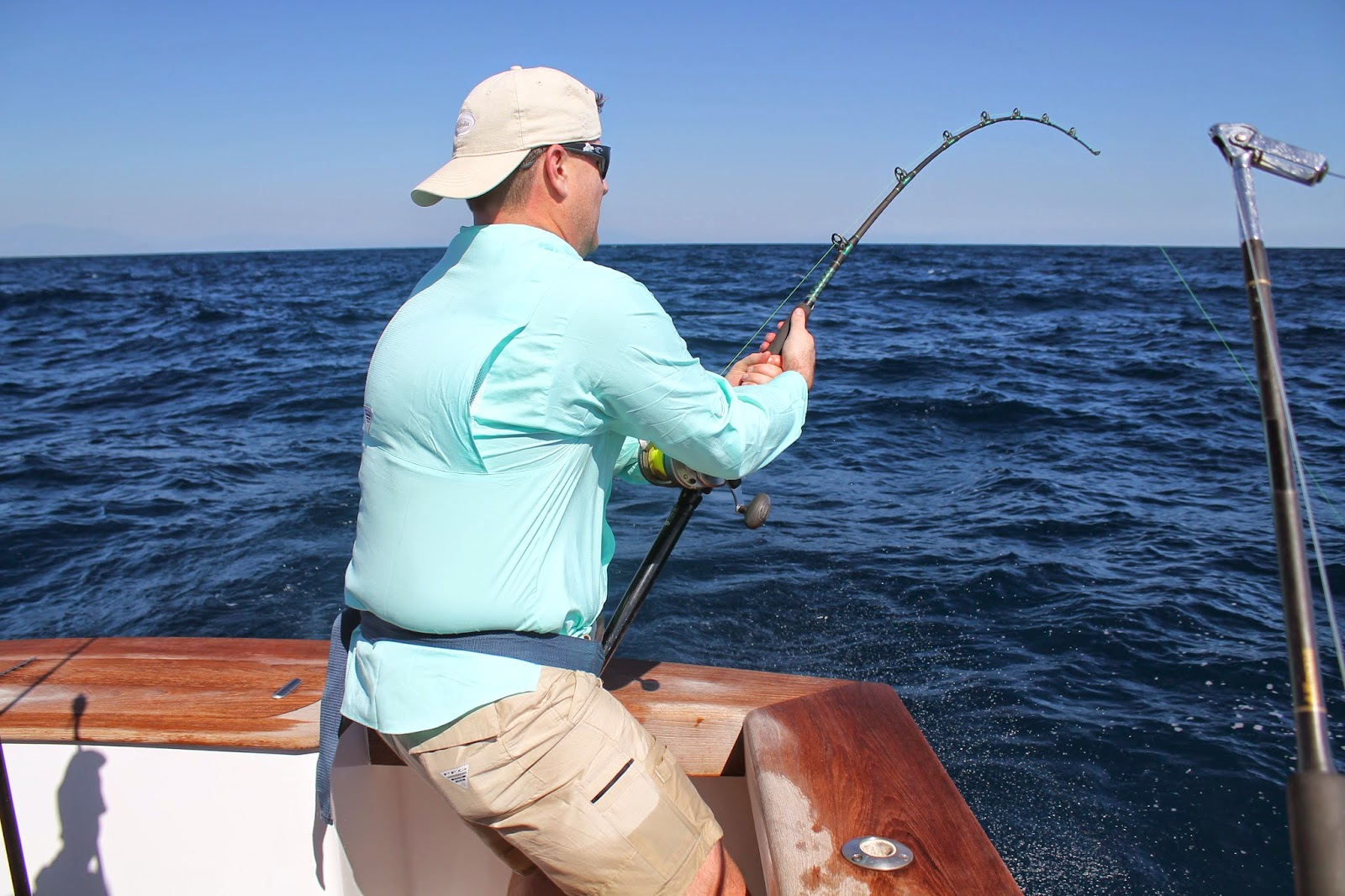 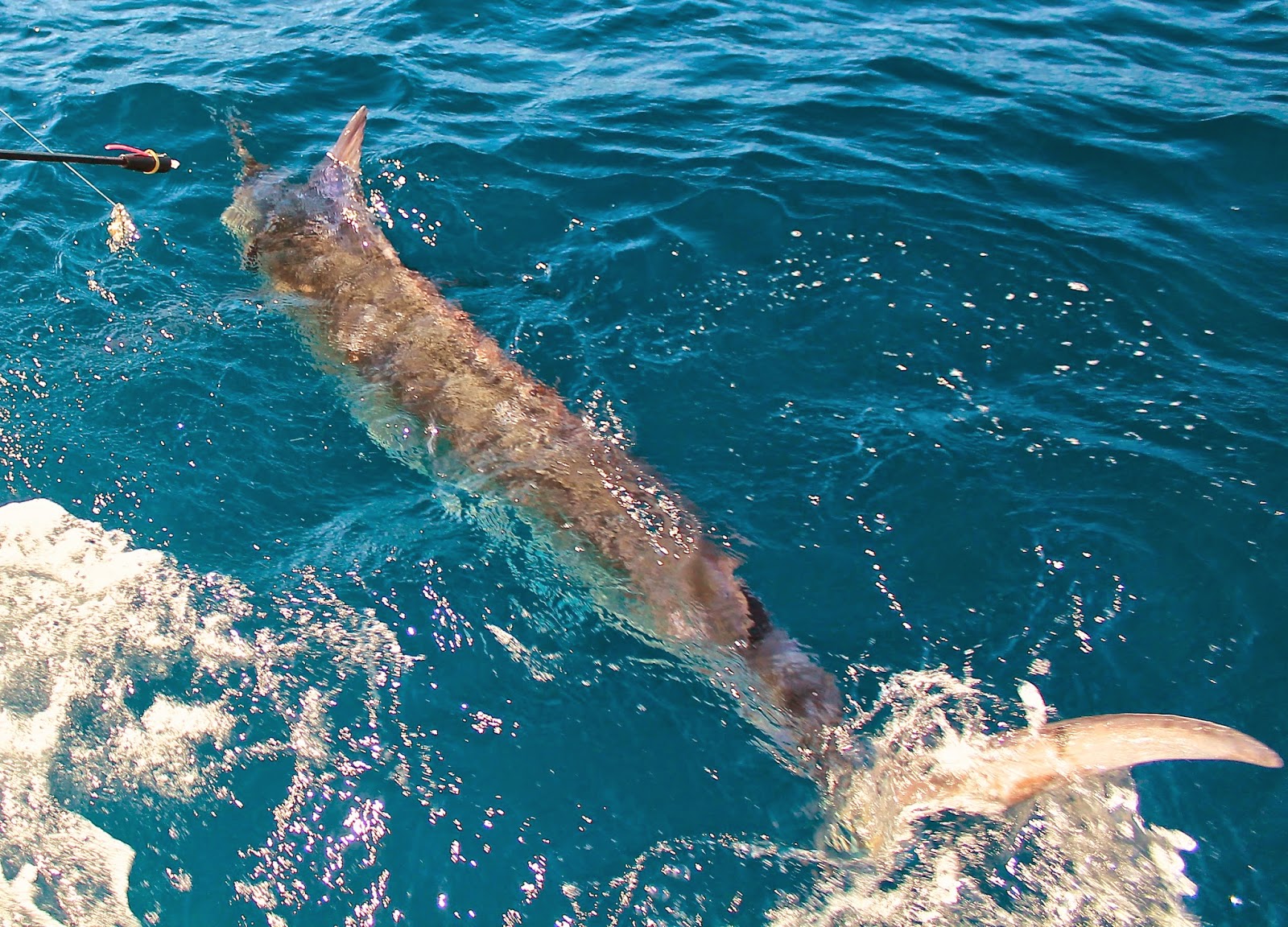 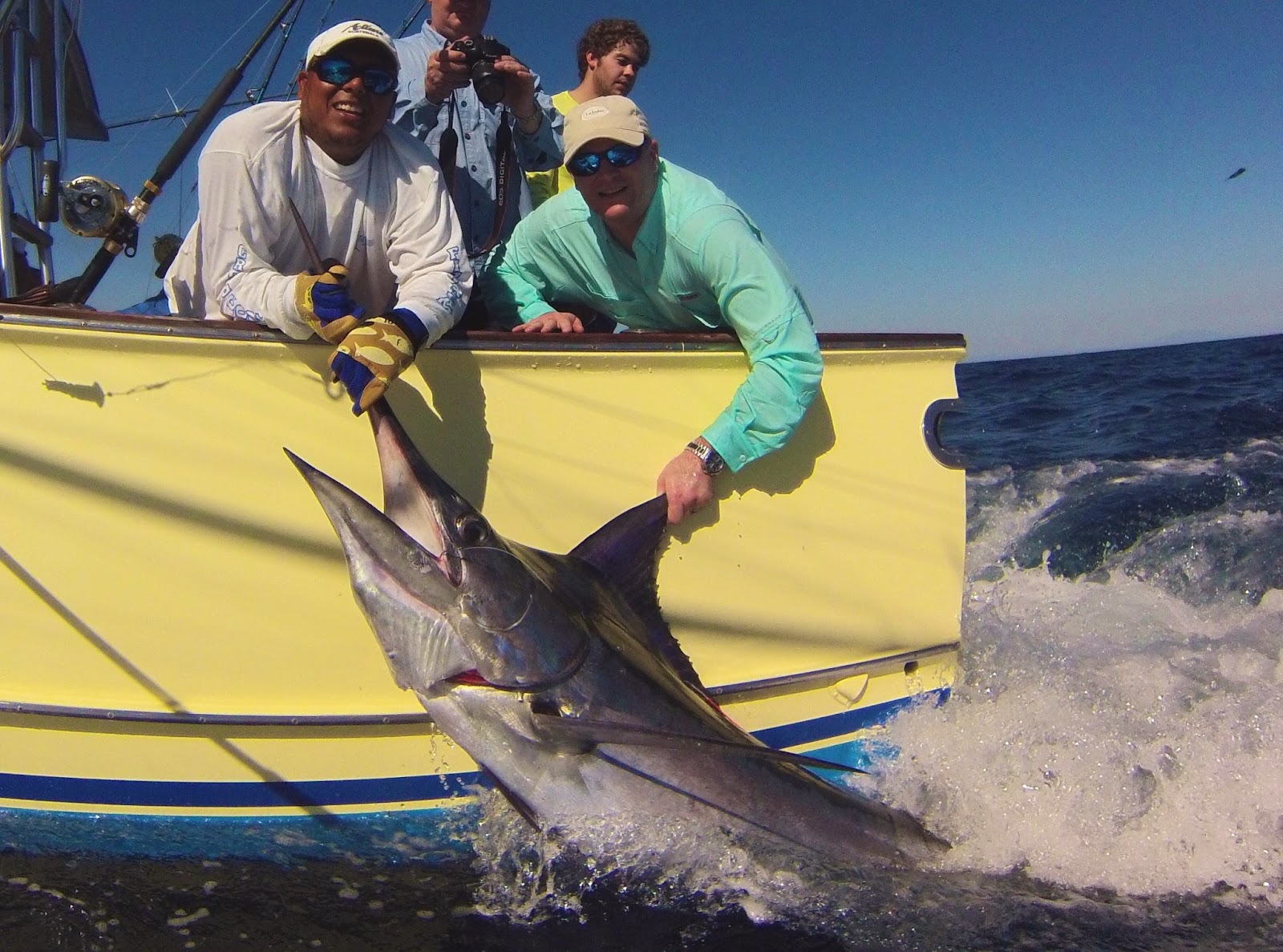 A request for sails the next day we put in the hard yards, it was a long run and sporty out there the whole day with the stiff ENE from the big cold front that pushed down. We found some fish off the edge raising 12 for the day and releasing 7 from 10 bites with everyone baiting there own fish off the teasers so a good effort in the conditions by the crew!! 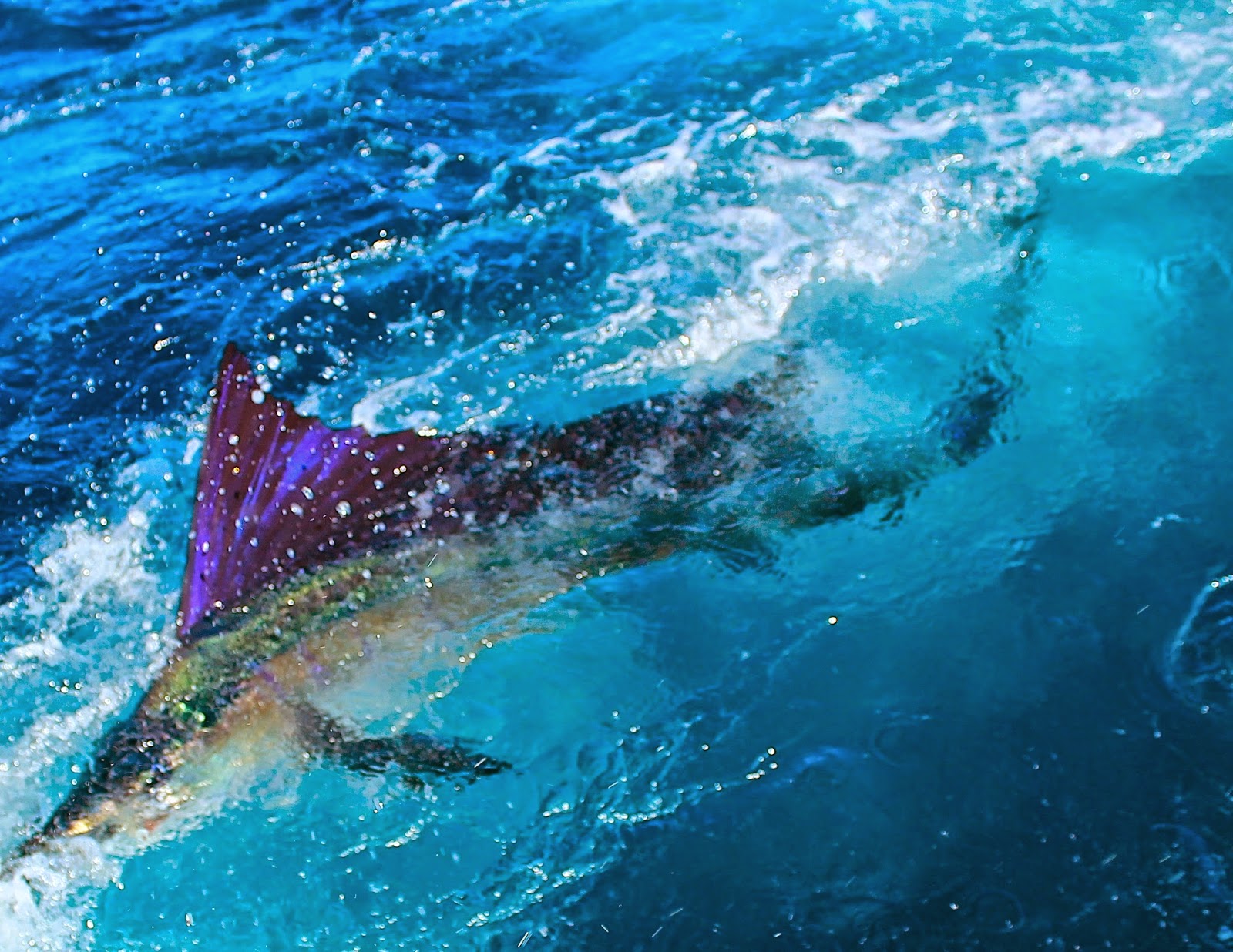 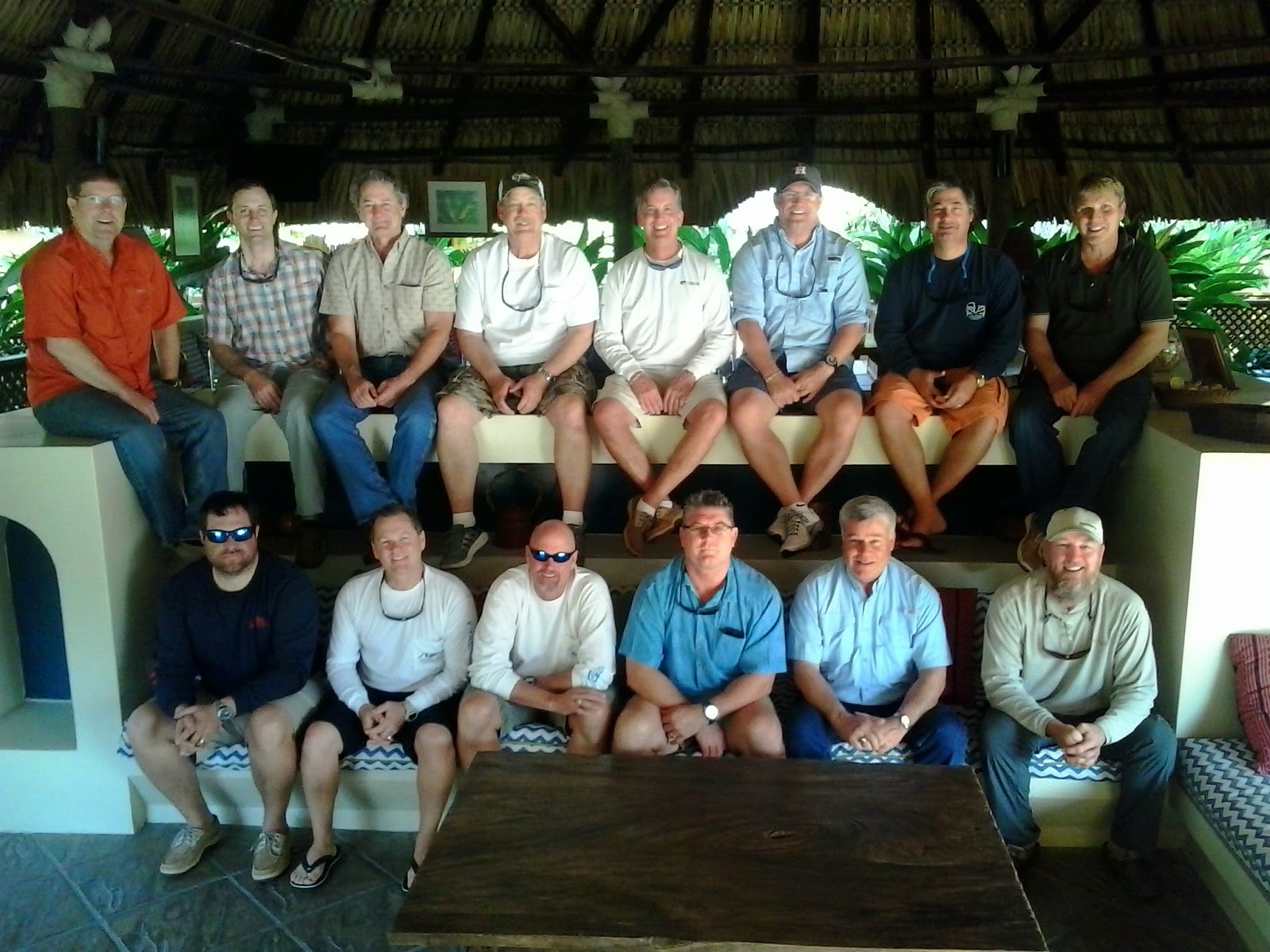 January 30th-31st through Superbowl Sunday Feb 1st we welcomed back the above group for their 4th year running down to the Oasis with Mark Thibaut, Ken Culbreth, Randy Wendell, Richard Lutz, Colin Ocker, Cody Jordan, Wes Jordan, Darrell Scanlan, Mike Lemker, Mike Griffith, Brett Smith, Dan Ray, Ted Culbreth and Paul Kennedy. This group has had a pretty incredible run down here in Guatemala with the fishing getting better for them each year culminating in last years 4 boat total of 265 releases. This year we were still feeling the effects of Winter Storm Juno with the first couple of days kind of shitty out there. Fishing on Allure, Allure II, Intensity and Capt Hook we made the most of it with the guys getting into the tunas pretty good and every day the weather, water color and fishing got a bit better, by day 3 every boat had over 20 sails marked in the raised column. We always have a blast with this group and the Superbowl Sunday night was a great send off. Looking forward to next year with flat seas and snapping sails!! 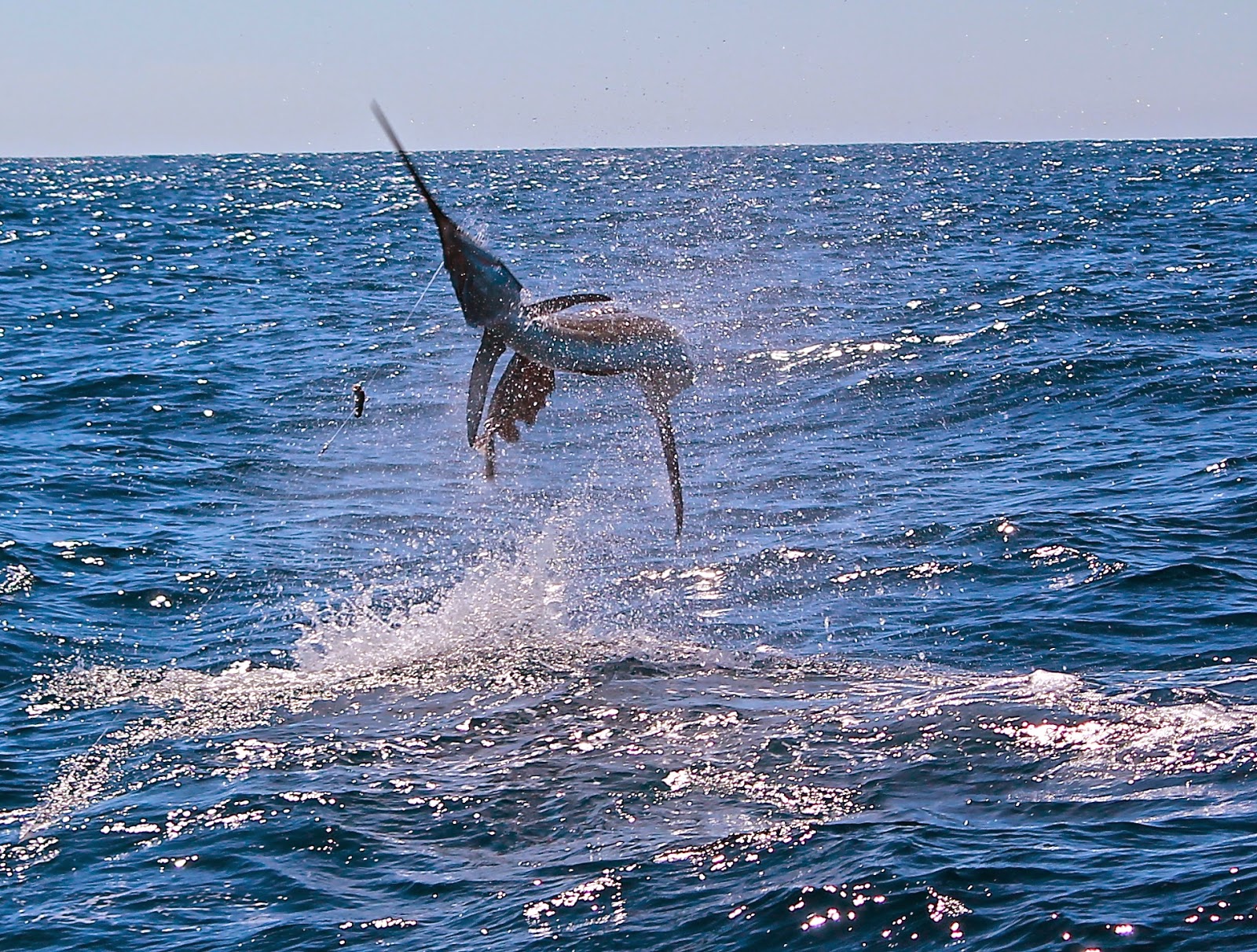 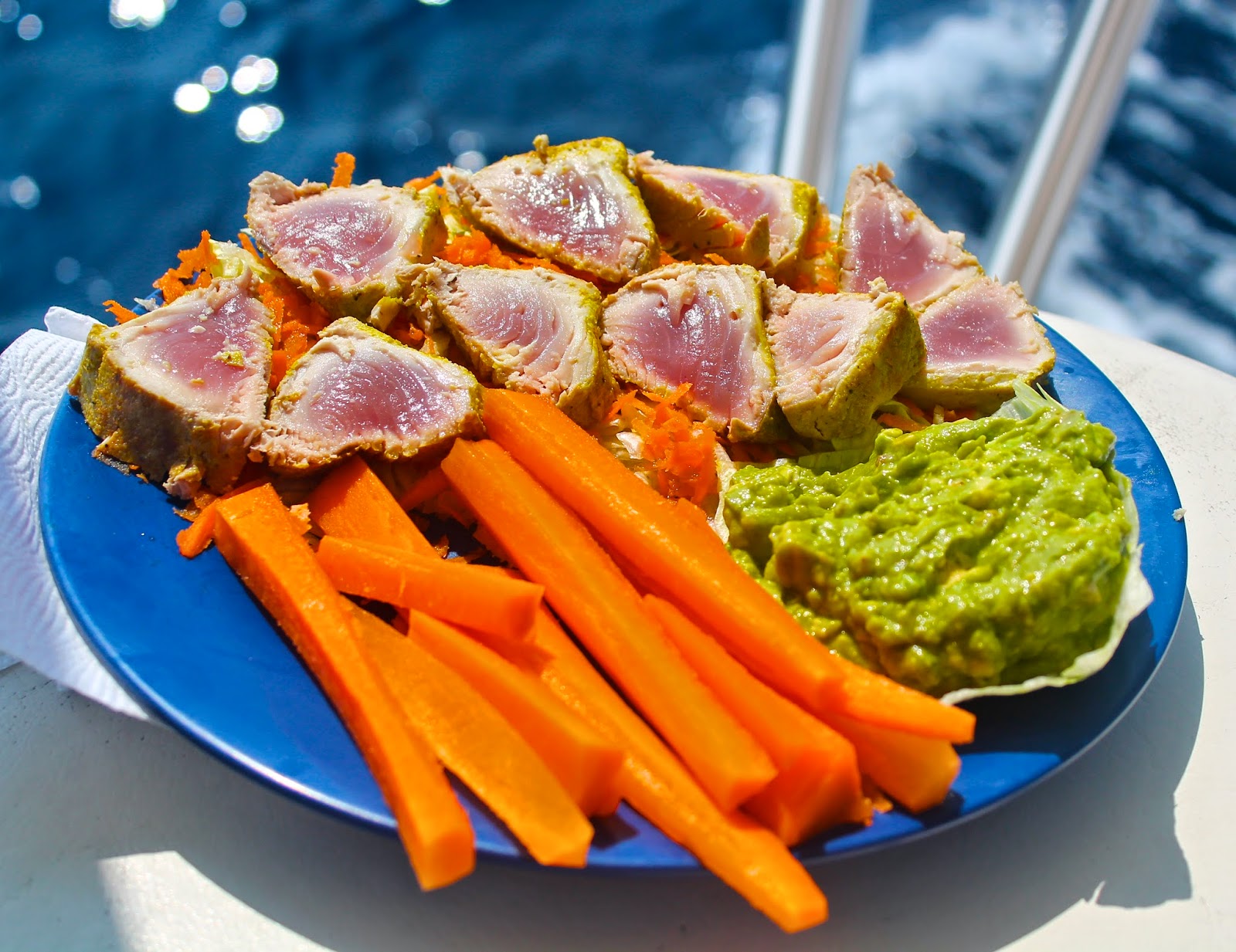 The fresh tuna made for some great boat snacks… 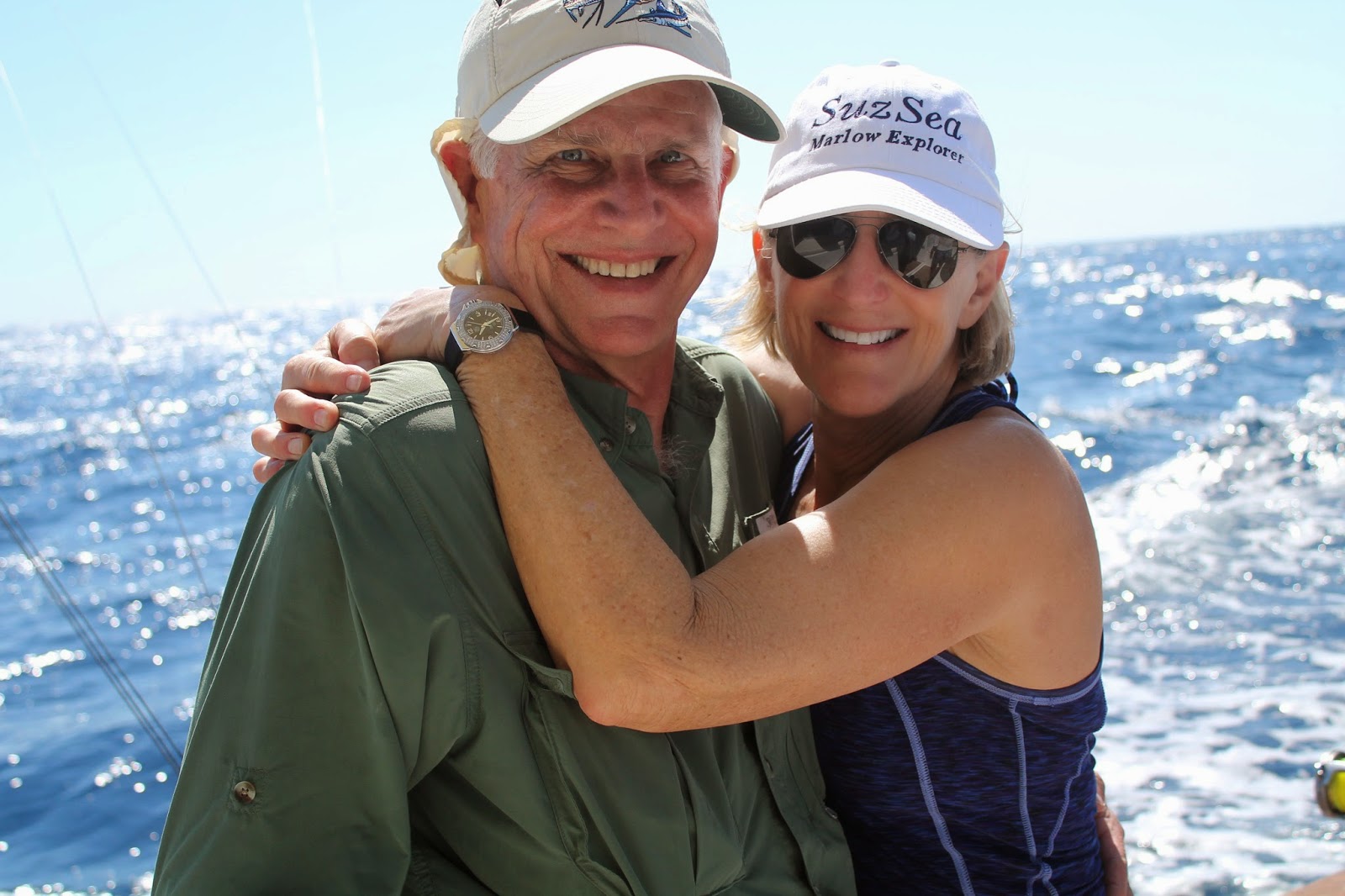 February 3rd and 4th Rex and Becky Hinshaw timed their trip well with great conditions and good fishing. Becky went all out for Rex’s birthday bringing him down to Guatemala for 2 days of fishing aboard ALLURE II and we had an awesome time. It’s always a fun time to fish with billfish novices with the excitement levels high on the boat, they could not get over how good the fishing actually was here and they are definitely not novices now with 43 billfish under their belts. The fishing was great both days with 21 from 26 bites the first day and 22 from 28 the second, included in those totals were 8 double headers and 2 triples!! Some spectacular action and some BIG sails in the mix as well with several over the 100lb mark. 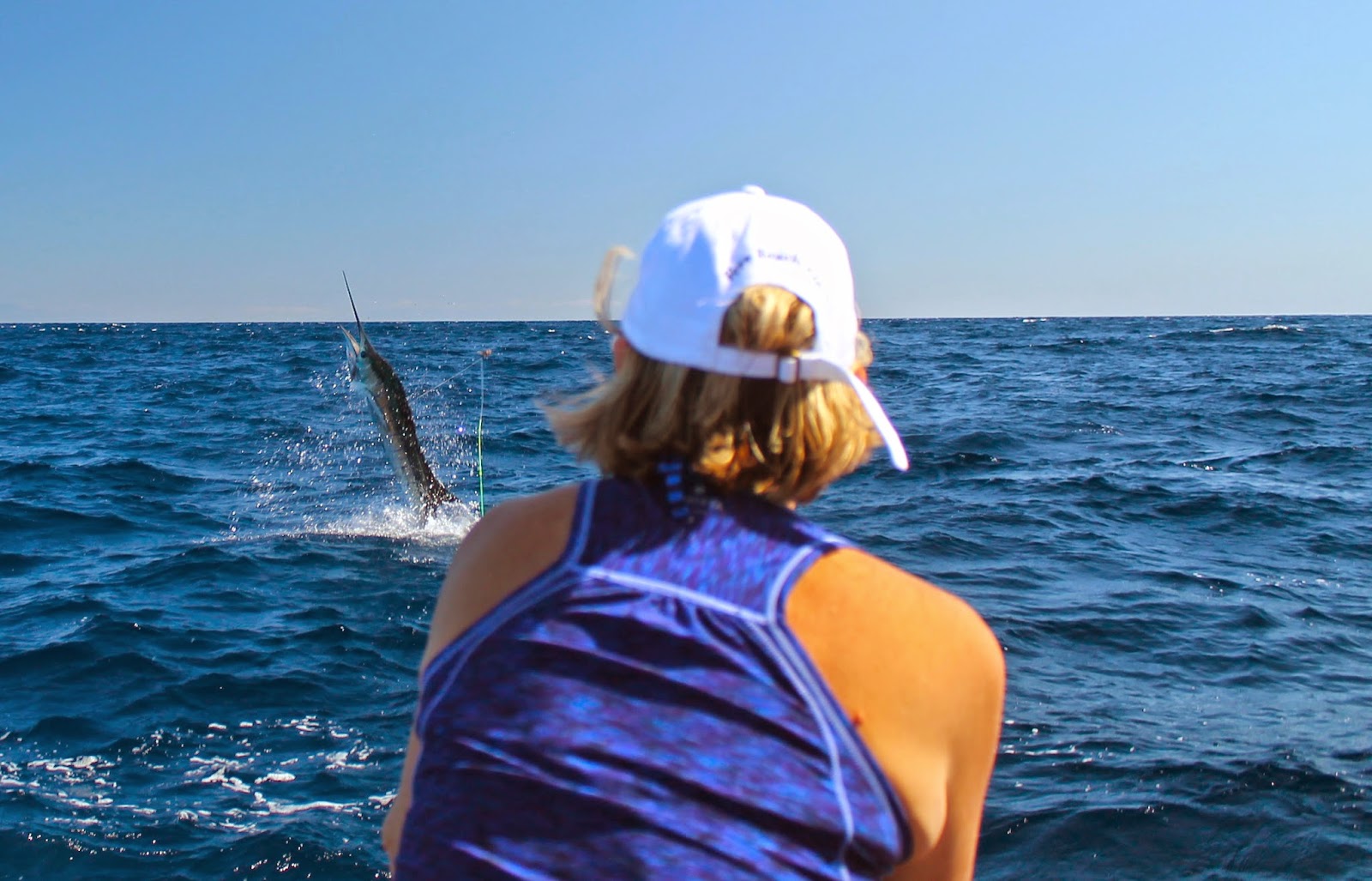 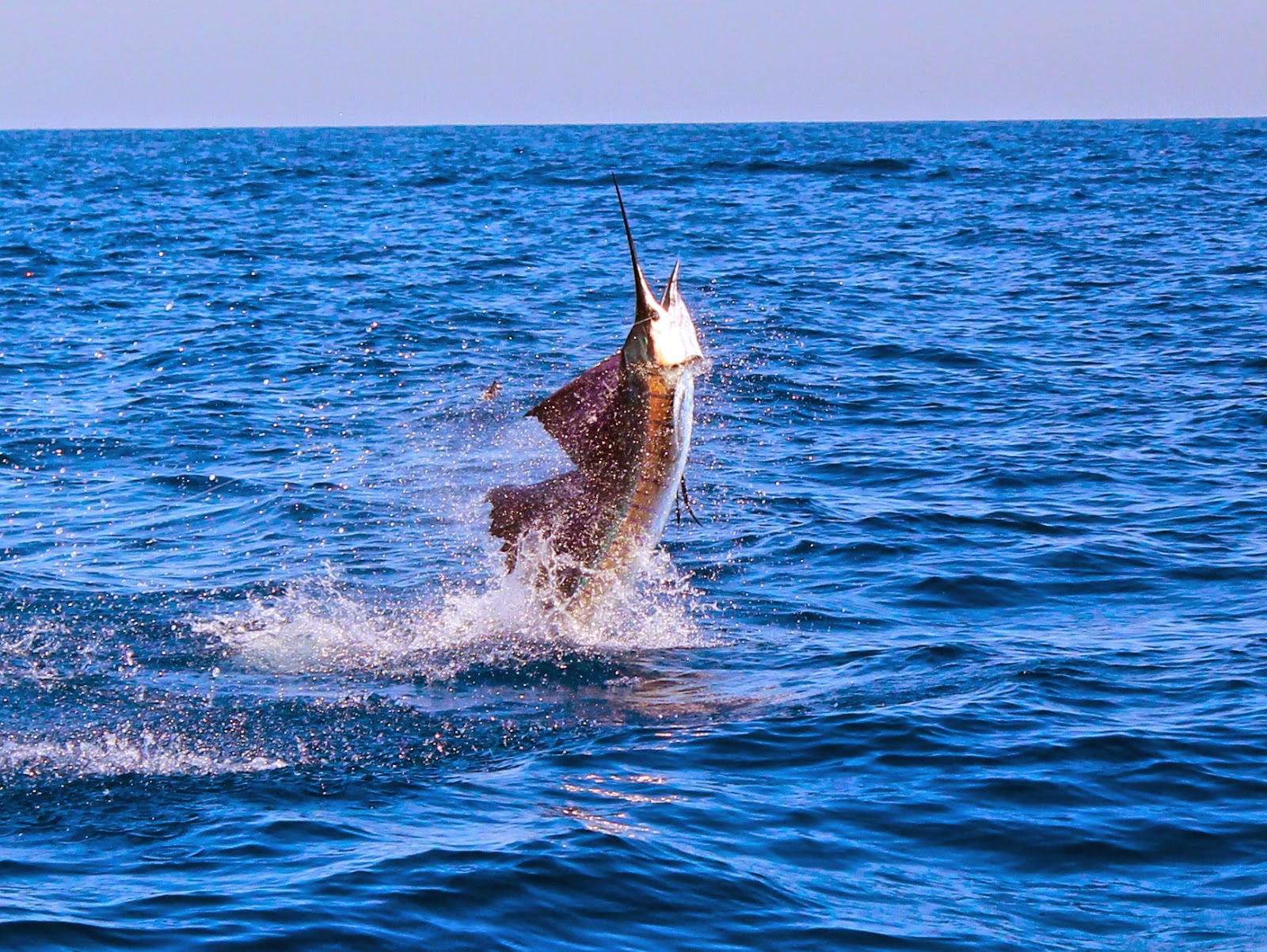 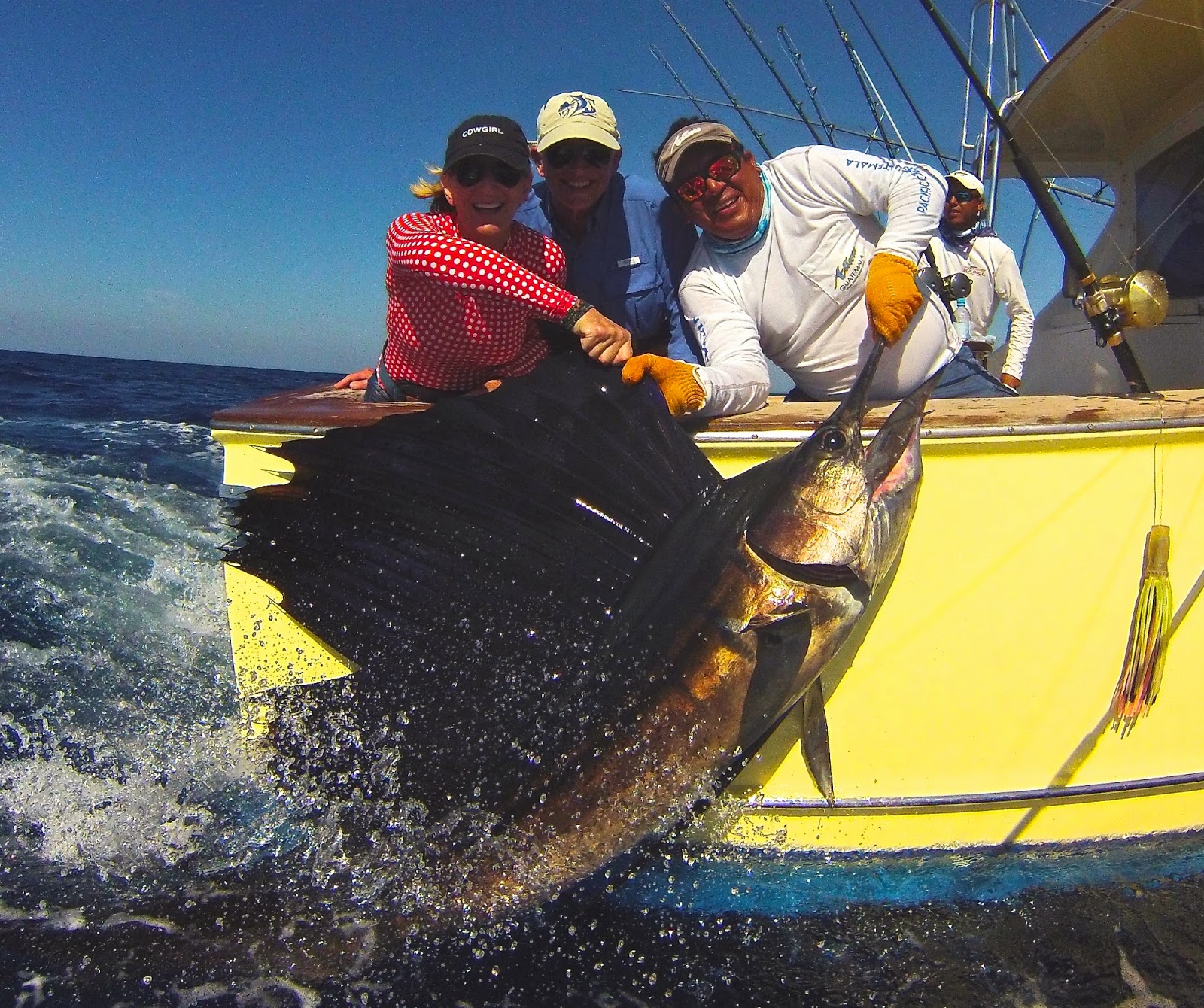 Last fish from a great trip!!
From here they’ll finish their trip in Antigua spending a couple of nights at the wonderful Panza Verde, a great spot to finish off what has been a great trip for them. We hope to see them back here soon!!
We’re starting to book up April and there is still the odd couple of days here and there later in February and in March. Over all we have had very good fishing this year so don’t miss out…the lodge is sweet…. 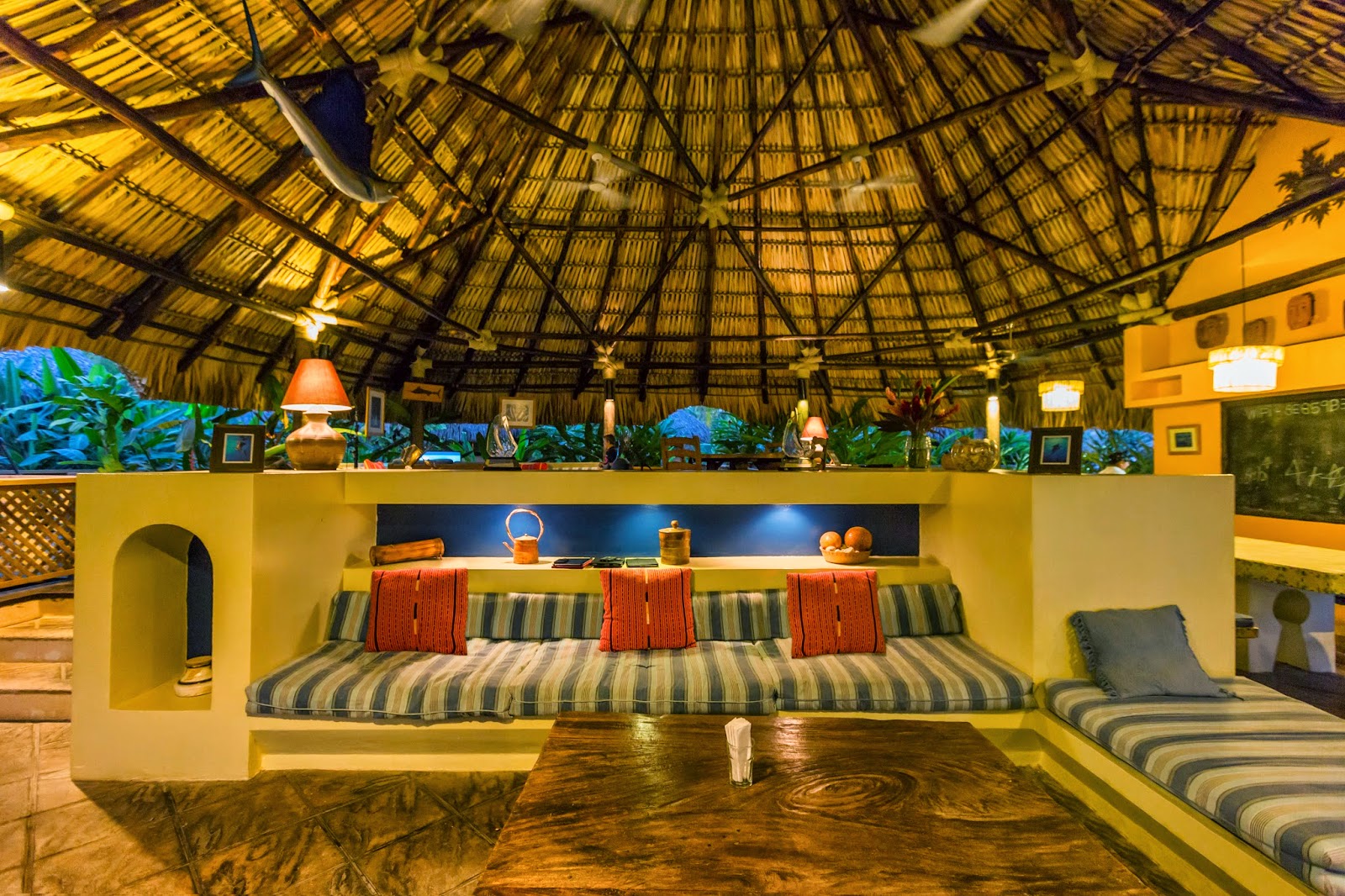 And we only serve the very best…..

ILÈGAL MEZCAL,
añejo for sipping and jovèn for some of the best margaritas around, ask for it by name, served exclusively on the Pacific Coast at SAILFISH OASIS….