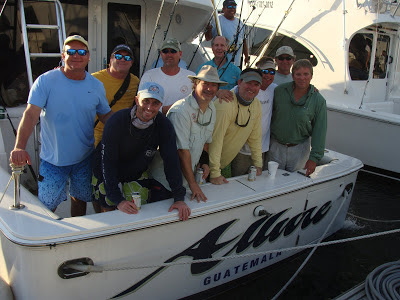 L-R: Kelley Erwin, Wes Jordan, Paul Kennedy, Colin Ocker, Mark Thibault, Robert Mills, Cody Jordan, Ken Culbreth, Mike Griffith and Randy Wendel
January 18-20 we hosted the Mark Thibault and Colin Ocker organized group as above for 3 days of billfishing here in Guatemala. These guys had a great trip last year and this year didn’t fail to impress either! Over the 3 days between 3 boats, A-FIN-ITY, ALLURE and CAPT HOOK the group raised 171 sailfish had 159 bites and released 125. Those are some great averages, the group hooked all their own fish, good anglers using ballyhoo with circle hooks showing just how effective they are when used correctly. The fishing started just 3NM off the breakwall the first day, moved down the beach 10NM to the west the second day which ended with a great afternoon bite. The last day things slowed down some inshore, on ALLURE we went out wide with 4 of the group who were keen on a marlin, we raised one right off the bat, the fish came up twice though didn’t eat the bait. We had a reasonable sailfish bite out there as well as a yellowfin tuna for sushimi back at the lodge. A good trip all round for these guys with a few mahi mahi in the mix as well, we look forward to fishing them next year!! 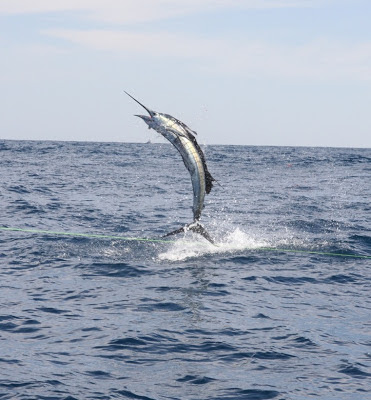 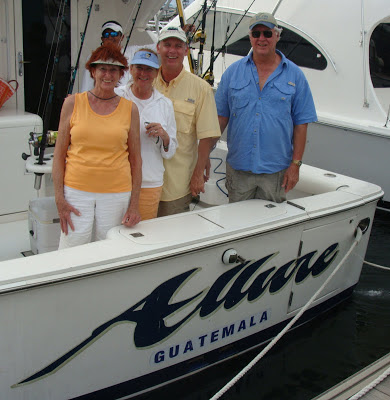 L-R: Andy and Cathy, Dave and Larry
January 23rd and 24th we welcomed first timers to Guatemala the Luther brothers Dave and Larry with their wives Cathy and Andy from Houston and Miami. Starting their trip with 2 nights in the wonderful Casa Santa Domingo in Antigua the group then came down to the coast for 2 days of fishing. This was their first billfishing adventure and they hit some good activity, for first timers they fished well with 21 sailfish raised 20 bites and 15 releases, as well as a 275lb blue marlin on the 30lb tackle for Larry and a nice mahi mahi of about 25lbs to boot. 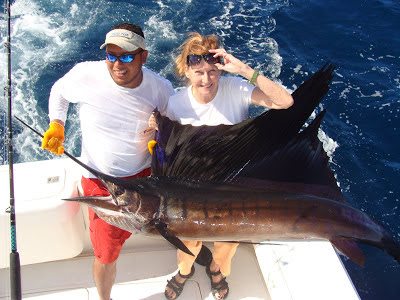 Cathy Luther with her first sailfish 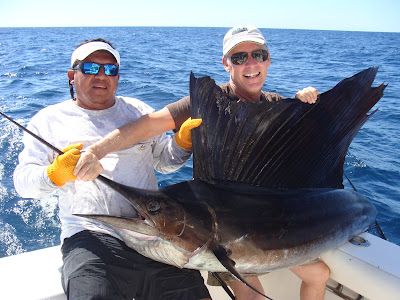 And Dave Luther with a particularly large specimen.

January 25th and 26th we had a bit of a strong cold front hitting down here, with snow even hitting the highlands of Guatemala, bit of a rarity that. With the cold fronts we get a bit of a stiff ENE wind and those were the conditions that welcomed Hill Dishman, Dean Land and Trey Strake. A bit lumpy the first day and we went out wide to the east looking for the good water and the current hitting that east side of the pocket. Fairly slow pickings with the guys making the most of their few opportunities going 5 from 6 bites. The next morning we decided to fish that incoming current out wide to the west, on the way out we came across a pod of humpbacks and Dean Lane captured this great shot of one breaching with the volcanoes in the background… 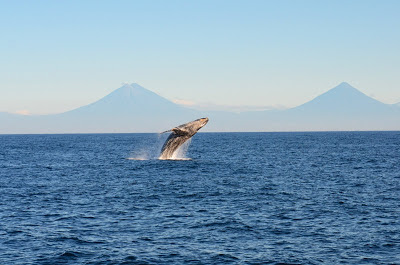 Awesome shot Dean!!
To the fishing, well, we covered alot of area, off the edge the water quality was OK though the temperature was a bit cool and we went 8NM off the edge and fished the current back up against it in the afternoon. A bit slow though we released 2 from 3 bites and were happy for it. Things will change here shortly with some warmer water pushing in from the west. We are out again tomorrow and for the rest of the week up to Super Bowl Sunday…. 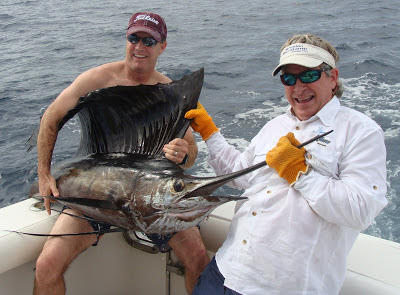 Dean Lane and Hill Dishman with another fat one.