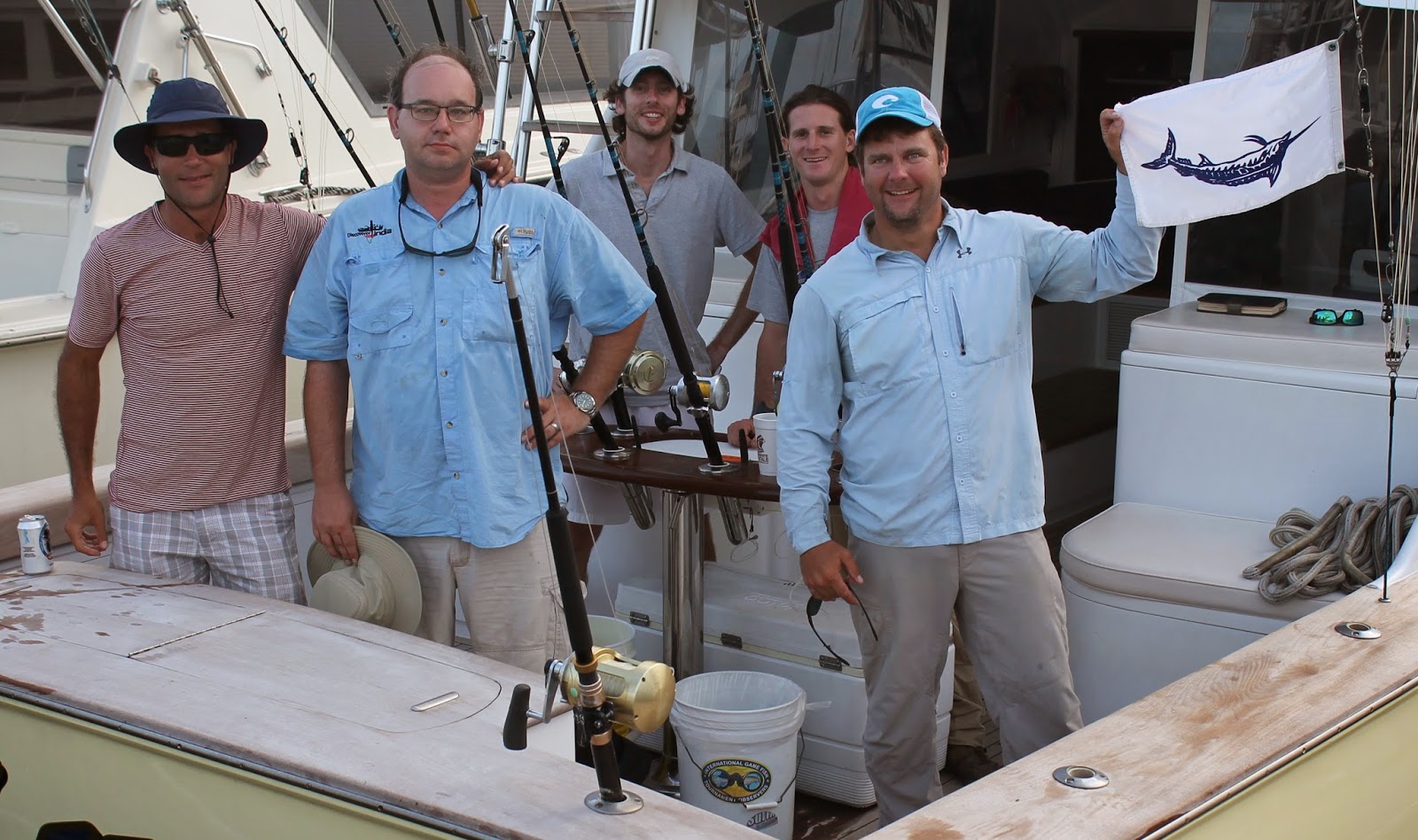 L-R, Javier Burga, Thor Sheffield, Chris Gohl, Toby Roberts and John Timura
May 29th, the Thor Sheffield group of above joined us on ALLURE II for one day of fishing and one night down at the Lodge. A mixed group with Javier and Toby living in Guatemala, Chris in Costa Rica and Thor and John from Islamorada, Florida, the pressure was on to get the guys into some fish. We tried our luck in middle of the ‘Pocket’ about 15NM straight out front where we found good blue water. A slow start we picked away at a few mahi’s with Toby landing this nice bull ensuring fresh mahi tacos for lunch…. 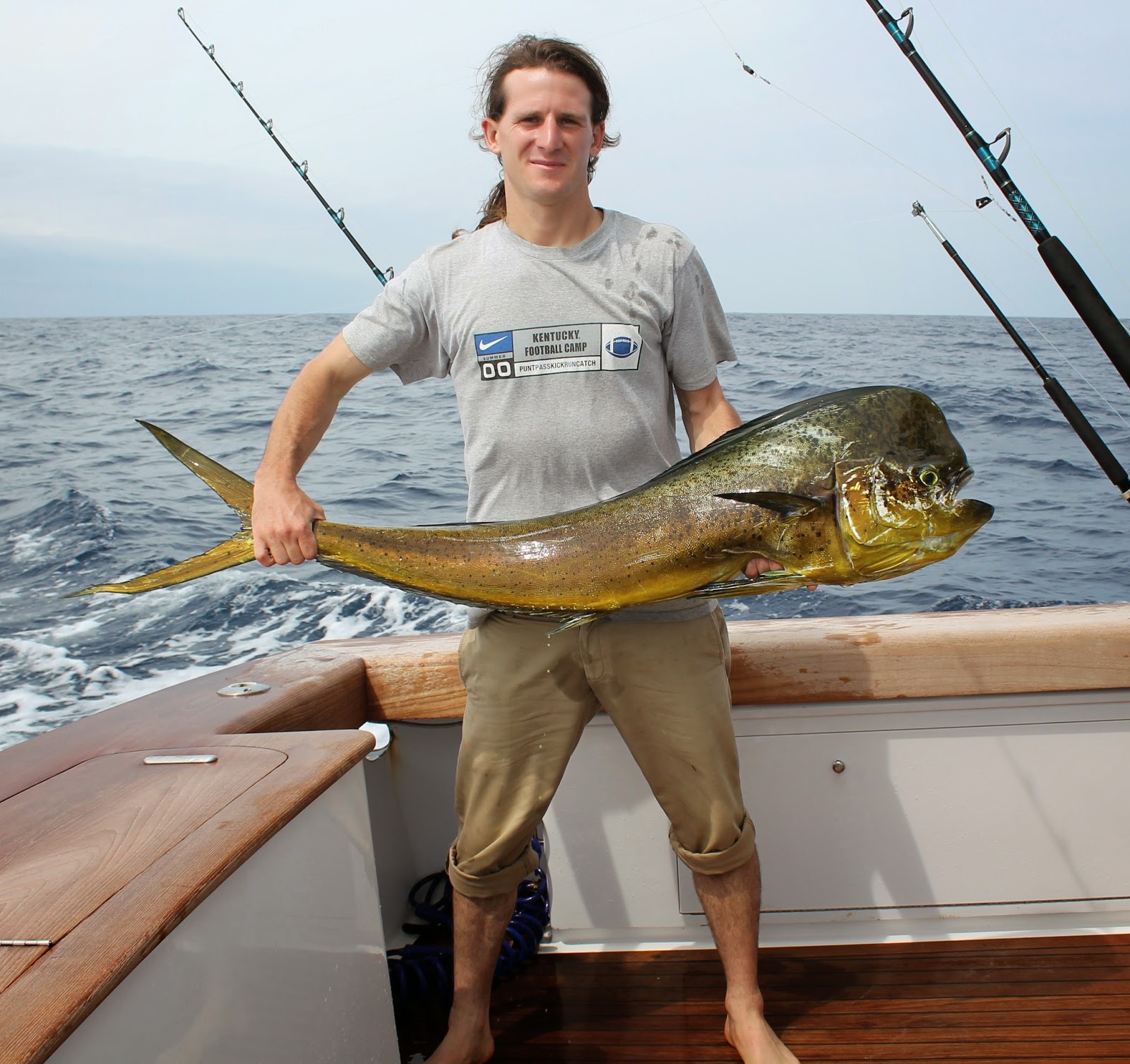 From here we worked our way to the western side of the pocket from the deep water to about 600ft and picked away at the sailfish in the morning with 7 releases before lunch from 10 bites and all the guys getting into a few releases. After lunch we got the one we were looking for, John Timura an experienced fisho had never caught a blue marlin before and was chomping at the bit to try. We’d had some nice bites from the sailfish on the teasers with pitch baits so he’d had enough practice in the morning session to have a crack and soon after lunch we raised a blue in the 150lb class on the left bridge teaser. The mackerel was pitched and the fish was teased to the back of the first wave right behind the boat where the John had the mackerel waiting, a perfect switch, great bite, freespool, lock-up and John was hooked into his first blue. Great job with the bite and on the rod!! 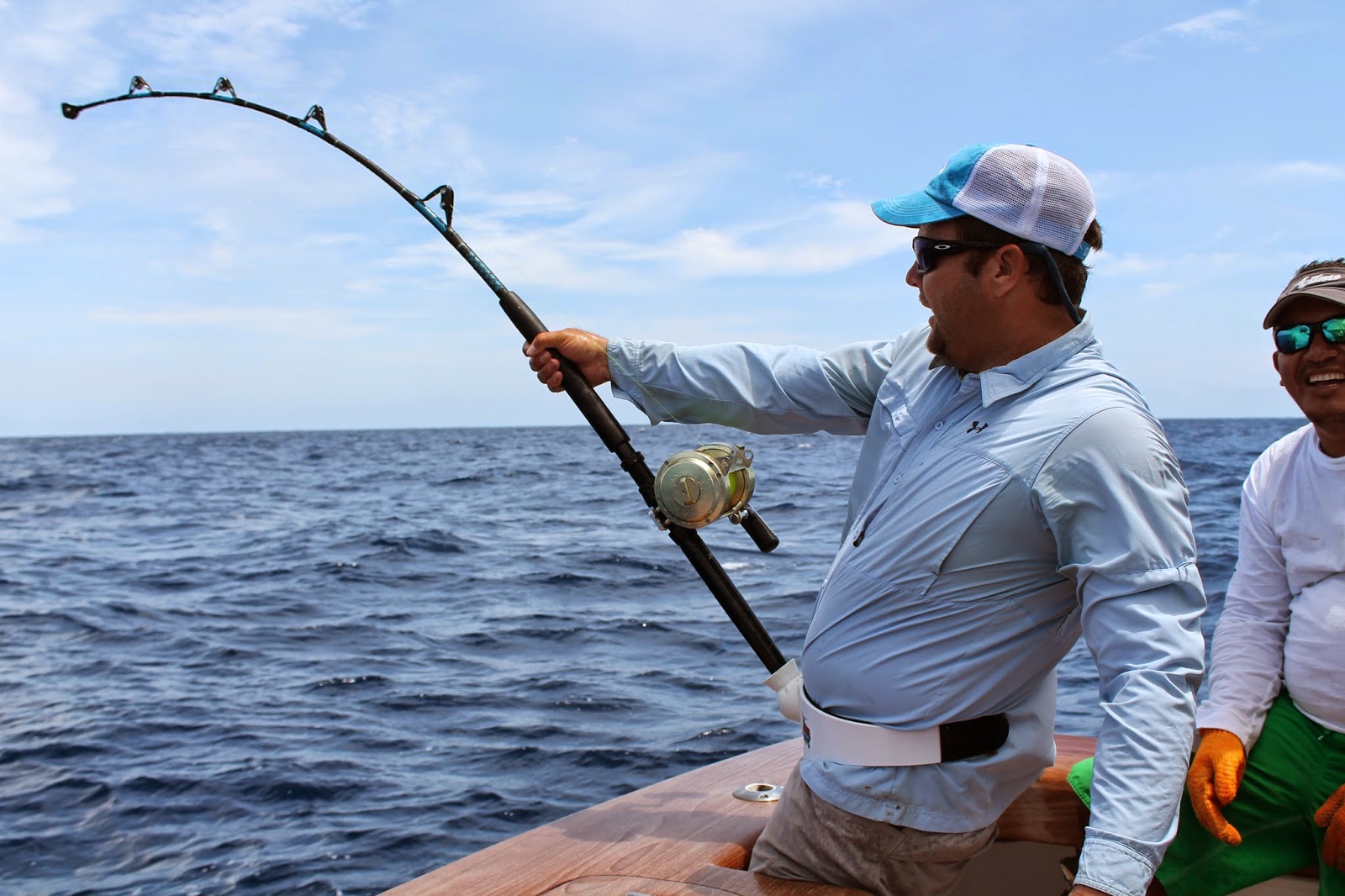 The fish came up jumping then stayed down and dirty for the rest of the fight, putting up a tough scrap on the 50lb stand-up. We got it up boatside, tagged, a couple of photos and released back to the deep…. 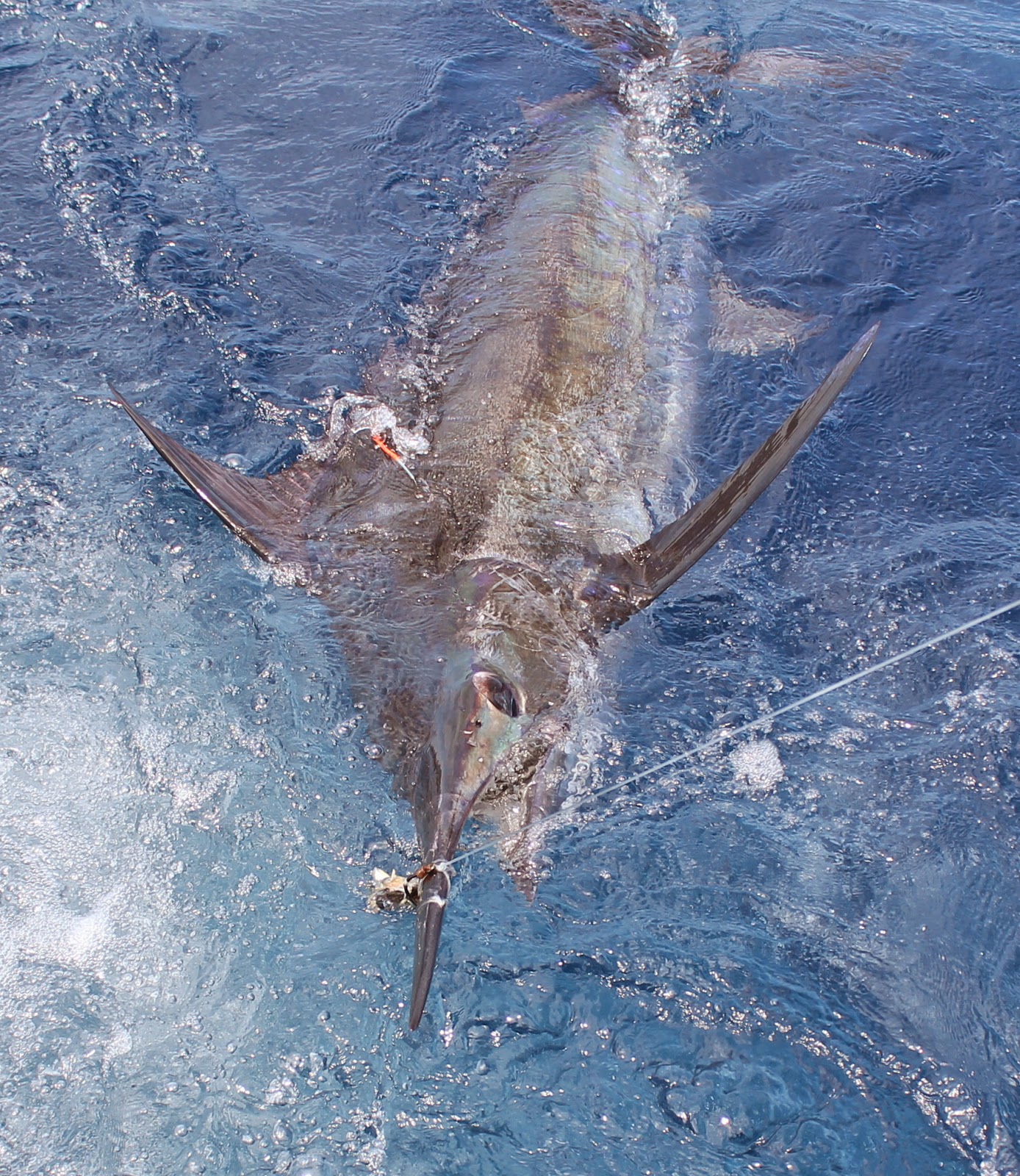 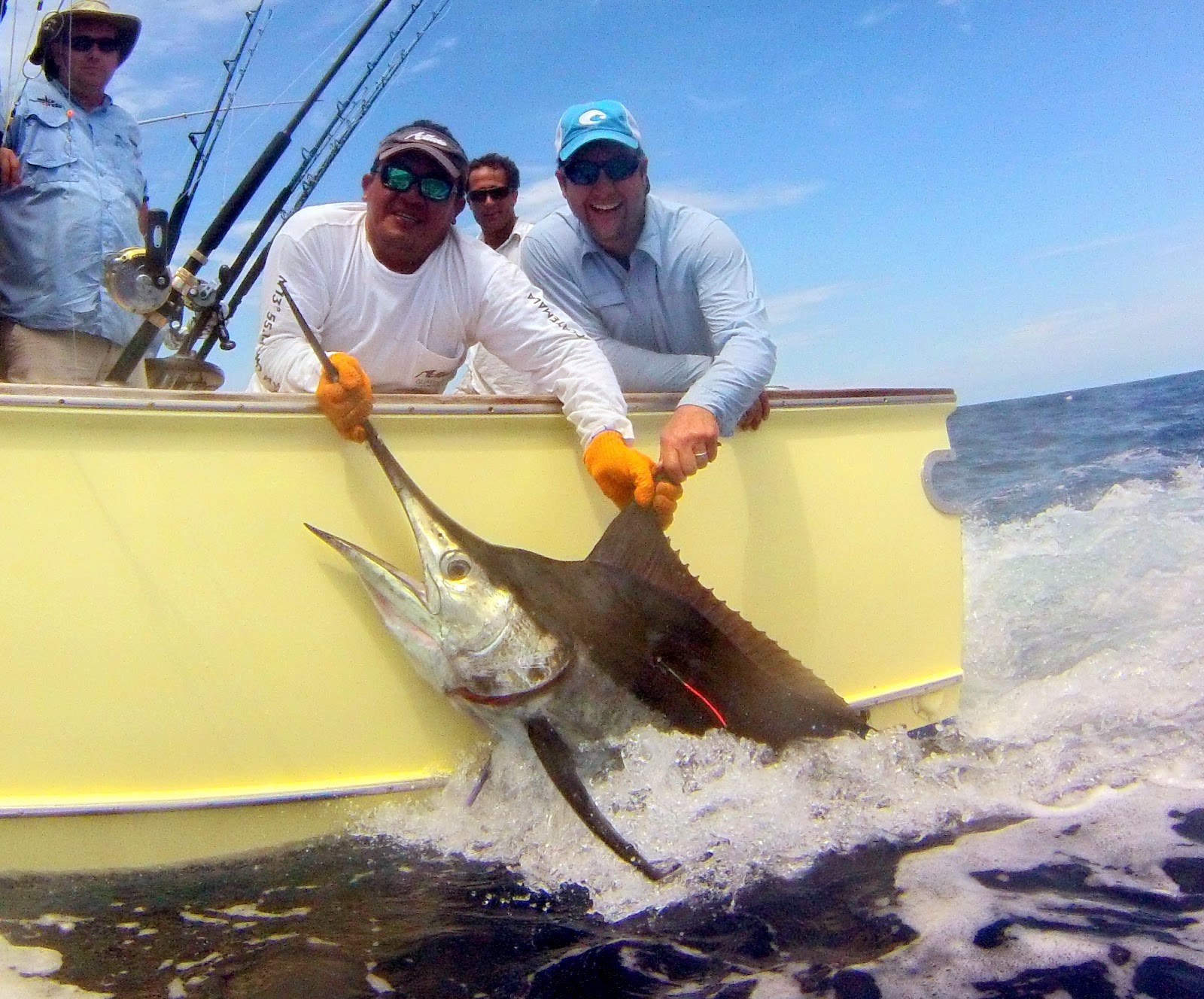 Nice going John….
In the afternoon we had a couple more sailfish releases… 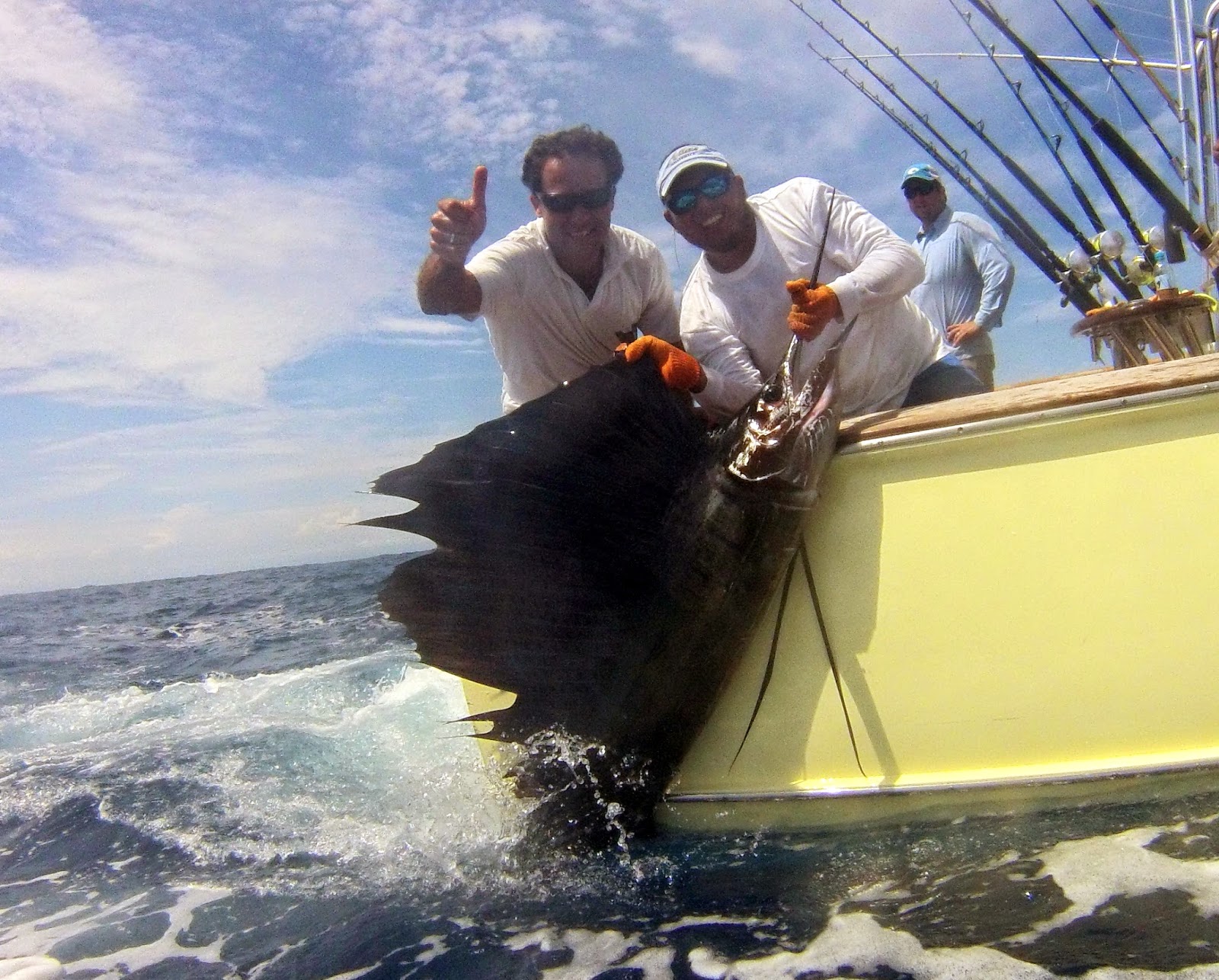 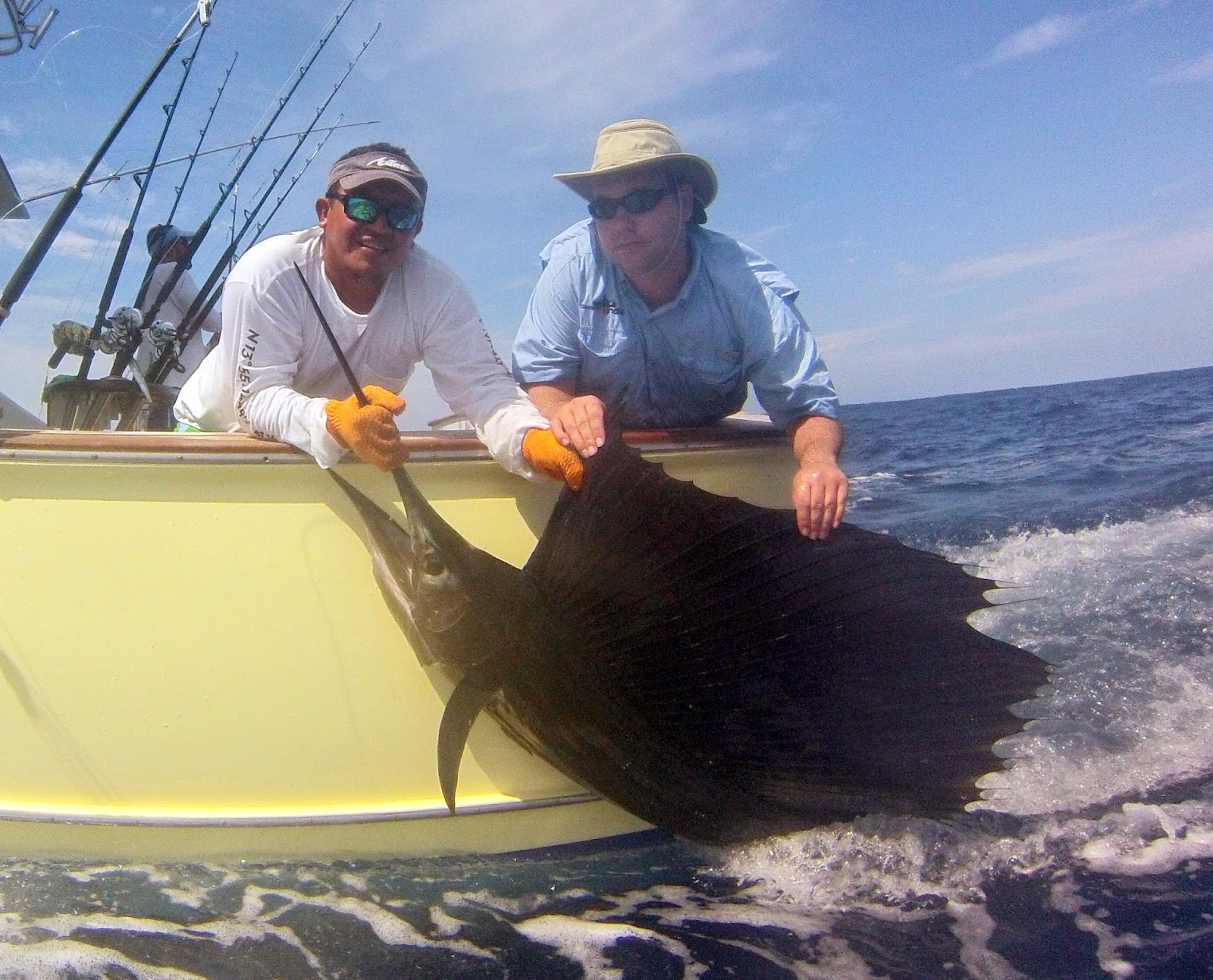 And Thor…
Before we had another blue marlin up on the left short teaser that nailed the pitch bait, shot to the other side, whacked the right teaser and ate another bait on the left rigger…..we missed that one twice. All in all though an excellent day on the water with 4 mahi’s boated, 11 from 15 sailfish bites and 1 from 2 blue marlin bites. Good times, great fishing!!
We had Hill Dishman with Casey McDermand and Steve Lipari down on May 30th though there was a low off the Golfo de Tehuantepec that turned into a tropical depression and soon the named storm Boris. We ventured out on the 31st though conditions deteriorated with strong gusty ESE winds. We managed 2 from 2 sailfish bites and postponed the rest of the trip after a rough ride back to the dock. From the Pacific side this far south they are kind of a rarity, this one dumped some rain on us after the wind subsided… 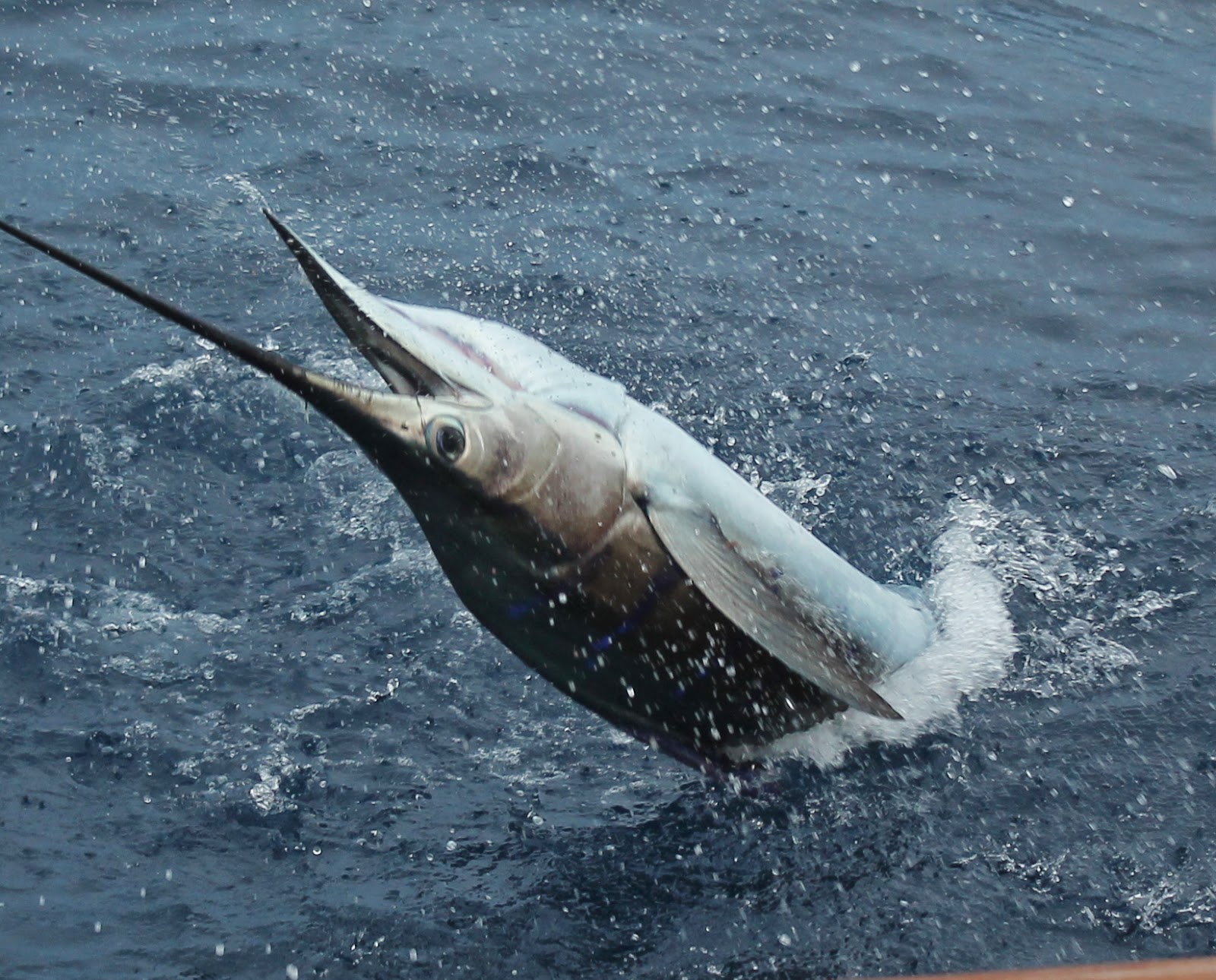 June 13-14-15 Hill Dishman was back down with his wife Donelle and brother Jamie and Cindy Dishman for a couples weekend. Friday the 13th it was the brothers only as the girls spent the day in Antigua and what a great start to the day…..The blue water was just 5NM off the beach with a very defined current line from dirty inshore water to deep blue almost purple water. Fishing just off the current line we were into them straight away. The early morning bite was on and we released 6 fish from 6 bites in the first 40 mins of the day. From there on in it was steady action working out to the drop off at the bottom of the ‘Pocket’ 8NM out to as far as 12NM off the beach. A great day on the water in excellent conditions we ended up with 21 releases from 31 bites.
The next day the girls joined us and we ended up having a late start leaving the dock at around 0900, the blue water had pushed in even closer to 3-4NM off the beach, a bit slower today though still steady action with 9 releases from 14 bites and a few nice mahi’s for lunch and dinner. 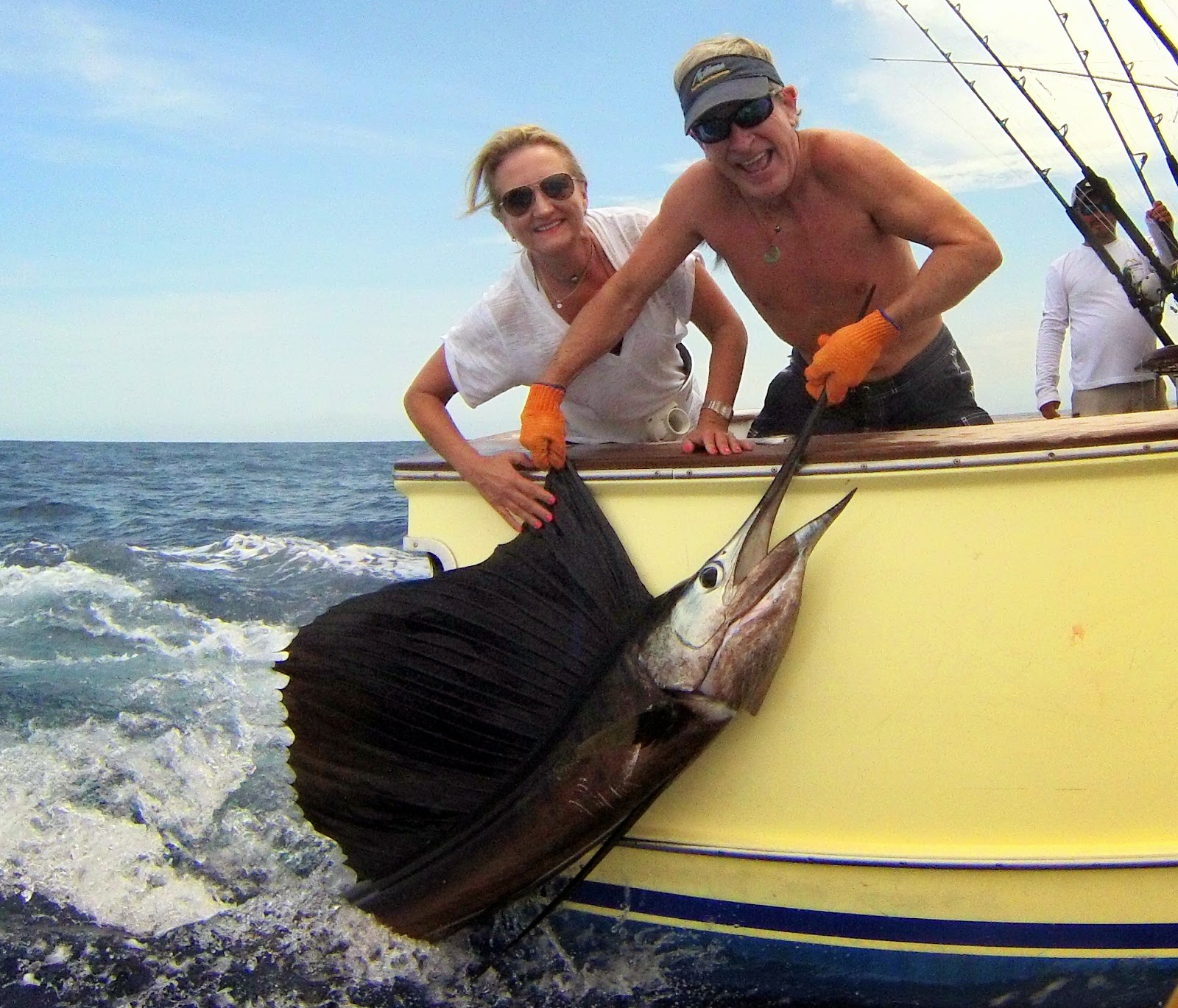 Hill and Donelle Dishman with a typical sized sail before release. 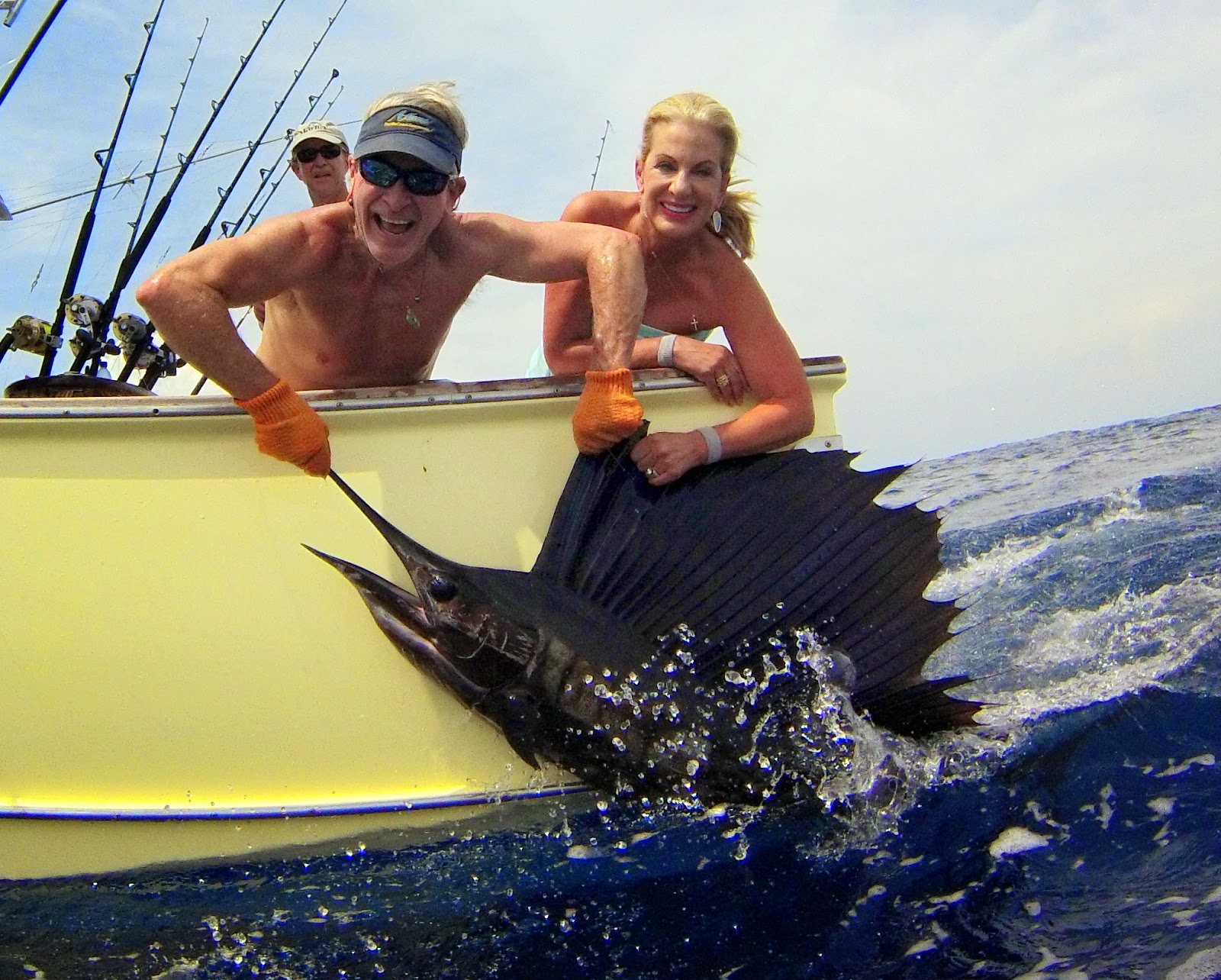 And Cindy with another.
We were back at the dock by 1600 to see the World Cup clash England vs Italy…..
Sunday the 15th it was just Hill out as Jamie and Cindy headed back home to Houston and Donelle spent the morning by the pool down at the Lodge. That morning we worked the 1000ft to 400ft mark at the bottom of the pocket again. Beautiful day out there, deep blue water and again steady fishing with 7 releases from 10 bites and back at the dock for midday to head to Antigua and an enjoyable afternoon up there for Fathers day. For the weekend then, 37 billfish releases and several mahi’s all just a few miles off the beach, it doesn’t get much better than that!
We are still here and so are the fish!! We’ll be out again this weekend and have some trips booked for August, if you want to come down to get into them get in touch with us. Also don’t forget we are taking bookings for the upcoming busy months November and onwards through 2015, it has been a great year here and we’re looking forward to more of the same next season!!