Photo of the month, John Lindley’s blue marlin before release, thanks for the underwater housing Drew McCullogh!!
Fishing has remained for the most part very good here in Guatemala, though recently the sailfish bite has slowed it seems to be coming back and ALLURE has had the hum recently with 8 marlin bites in the last 6 fishing days. Here is the breakdown….
March 2nd and 3rd Chris Bean Group 45 releases 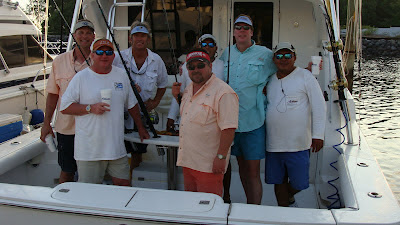 L-R John Chesser, Guy Hallberg, Mike King and Chris Bean with ALLURE crew
We welcomed back Chris Bean aka Snr Frijole for the second time this season, this time with friends from Houston and Beaumont TX as above. Another great timed trip by Chris as he hit the fishing pretty good again, over the 2 days we raised 78 sailfish and released 45 from 67 bites, pretty good averages! We also raised 2 blue marlin on the second day out though could get a bite out of neither of them. Late on the second day we changed to the fly and things slowed considerably though we did get a couple of bites….As always with Chris and his crews we had a great time and look forward to the next trip.
March 4th-9th Team Circle Hook 81 releases and 1 blue marlin 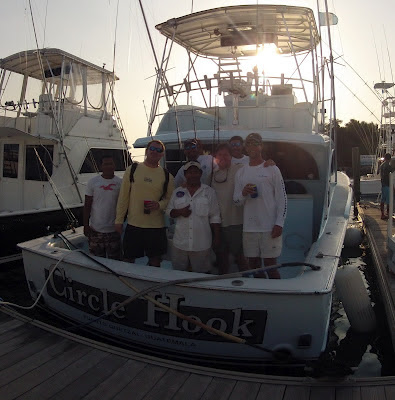 L-R Chris Yarborugh, Capt Eddie, Bryan O’Dell and Drew McCullough
Circle Hook owner Bryan O’Dell came down for an extended stay to SAILFISH OASIS and had a blast as always, for the first 3 days of his trip fishing with Cantey Smith and Owen Gallagher the guys hit some great fishing with a red hot bite releasing 70 odd sails. Bryan took Wednesday the 7th off to see off the crew and welcome in Chirs Yarborugh and Drew McCullough for 2 days of fishing. The sail bite cooled off a little though they still released a few sails, a nice blue marlin for Chris and boated several yellowfin tunas and mahi’s to round off another great trip to Guatemala.
Team Klein 62 sails, 1 blue marlin, 1 stripe marlin 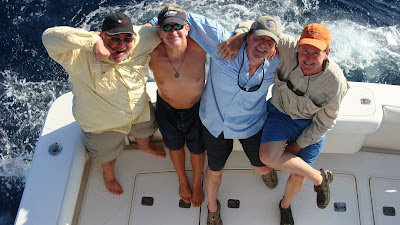 Brad Klein, Hill Dishman, Erik Hansen and Dan Wheat
Next in ALLURE half owner Hill Dishman fished with good friends and Guatemalan regulars Brad Klein and Dan Wheat, this time introducing the great fishing here in Guatemala to another good friend Erik Hansen from San Antonio. Another well timed trip with 128 sails raised, 100 bites and 62 sailfish releases along with 1 stripe marlin and 1 blue marlin in 3 days!!. With the bite being slow just before their arrival a body of fish pushed in form the south along the eastern edge of the pocket and the bite turned on. Lots of bait, bonito’s, sails and marlin, and some big mahi’s in the 35-45lb range crashing the baits and spitting up wads of squid once hooked. The sailfish action was nothing short of hot at several stages through the trip with a couple of quad hook-up’s released and a few triple headers from some absolute cover ups. Brad Klein has been coming to Guatemala for the past 12 or so years and had never caught a marlin, well this time round he hooked and released a stripey on the first day….. Hill getting a wrap on Brad’s stripey. 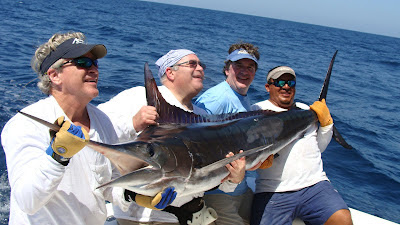 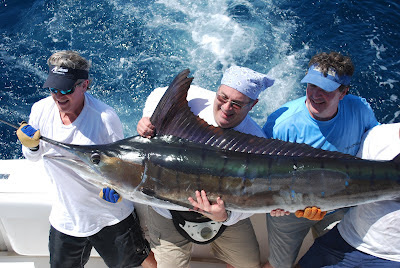 Hill, Brad, Erik and mate Julio with Brads first marlin release.
Then on the last day out early in the morning he pitched the mackerel bait to a hot 200lb+ blue marlin off the bridge teaser to complete a personal slam…. 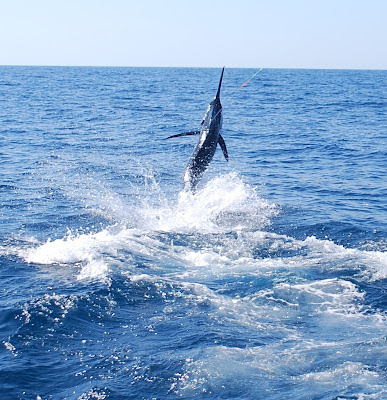 Way to go Brad!! As well as hot billfish action we also got into some nice mahi’s like this one for Erik Hansen…. 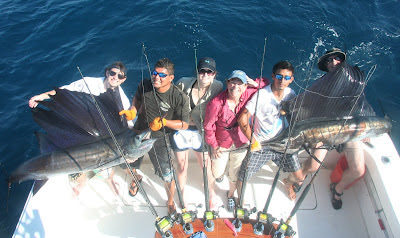 L-R, Robert, Blakely, Rhonda and John Low with another double header.
At the same time down at the OASIS we had the Low family in for a Spring Break to remember. Fishing aboard KNOTWORK a 35 Luhrs and having never had a whole lot of billfish action they were amped up after hearing of the exploits of Erik Hansen and the rest of the guys down at the lodge on the day of their arrival. No disappointments here, they released a total of 45 sails and boated a few slammer mahi’s in 2 days to round off the best fishing trip and Spring Break ever. They finished off the last 2 days of their trip in the beautiful Antigua, touring coffee farms and soaking in the 16th century Spanish colonial town. 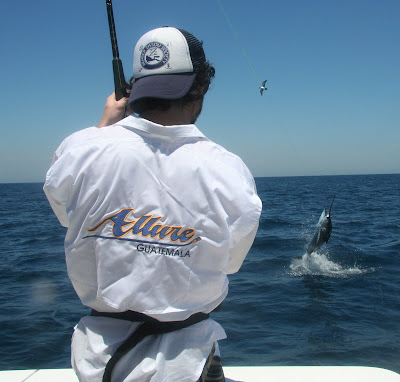 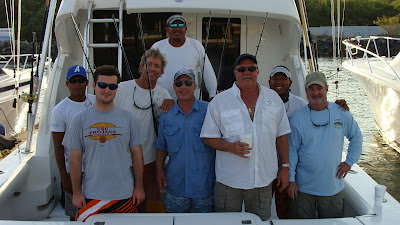 Matthew Lindley, John Lindley, Tom Preston and Steve Lindley.
Next in we had for their 3rd year running John Lindley and Tom Preston, this time bringing in Guatemalan first timers John’s brother Steve and son Matthew down for Spring Break. We started in close and missed a stripe marlin first off the bat at the bottom of the pocket, it was slow for the next hour so we made a late run for the edge though it was worth it out there. For the day we raised 24 sails had 19 bites…… a few things went wrong coupled with plain bad luck and we released just 4 sails, the luck changed when the last bite of the day hot on the teaser was a 180lb blue for Tom Preston, the fish pulled hard though Tom did well releasing the fish on the 50lb stand-up gear. 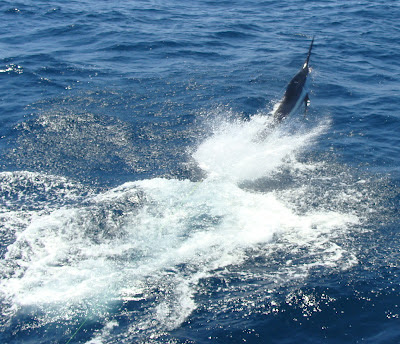 Tom’s fish tearing it up near the boat.
We started short of where we ended the previous day and John got into a feisty blue after an hour of trolling out to the spot. Soon after letting it go we had another hot on the teaser, John got the bite again and came tight to a nice 250lb fish… 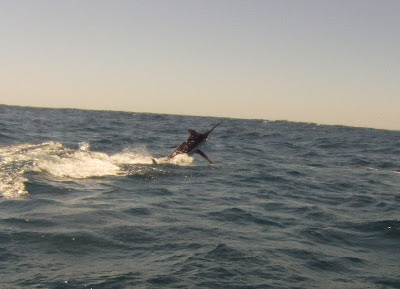 John got the release on that and we took some time out getting some awesome shots on the Go-Pro. Good fishing John!! With a couple of stripey’s being caught to the east of us we concentrated our efforts there hoping for a stripey to complete the slam, though, no luck there. We had another 2 sailfish bites releasing one for the rest of the day and a nice mahi for John…. 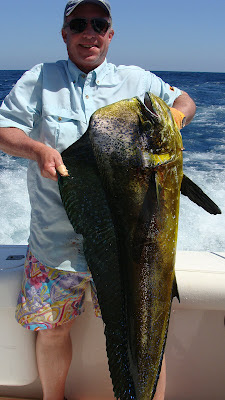 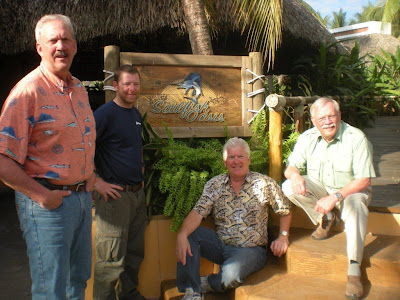 Doug Zingula, Jon and Paul Sokol and Hollis Perkins
We welcomed back Doug Zingula and Hollis Perkins to SAILFISH OASIS this time with father and son team Paul and Jon Sokol. Both Paul and John had fished Guatemala before though their first time at the OASIS and on ALLURE. The sailfish bite had dropped off and it was pretty tough out there for everyone, boats covering ground trying to find ‘the bite’. We fished up the eastern side of the pocket and the first fish of the day was a blue marlin, Jon’s first, a small blue of about 130lb’s it crashed the short teaser and we pitched the 30lb tackle to it. Great sport on the 30lb it was too giving Jon a good work out before getting it boatside….. 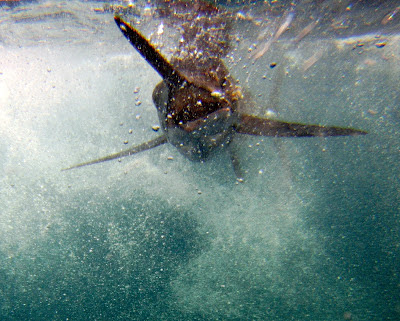 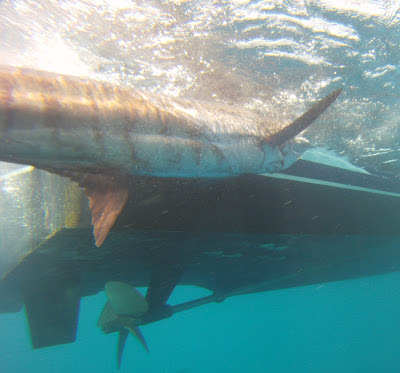 We worked hard the rest of the day raising 3 sailfish and releasing 1 from 3 bites. The next day we covered alot of ground, the highlight was a 350lb blue crashing the short teaser, we got the mackerel back there and had the best bite of the year, on the second wave the marlin came out head and shoulders right to left, an incredible bite though we missed it, even when it came back the second time, crushing the bait though not eating. For the rest of the day we raised 3 sails. Looking to finish the trip on a high we ran way down near the western corner, about 45NM. The move paid off with fairly consistent action in the morning with the sails, a couple of nice mahi’s and a blue of about 200lb’s, another great bite and series of jumps once hooked. We finished up raising 12 sails, releasing 7 from 11 bites and changed it up to the fly in the afternoon getting a text book bite for Jon.
A little slow by Guatemalan standards though it looks like things are on the turn and we are expecting better things in the weeks to come. The blue marlin are out there and there are still a few stripeys about as well. We’ve had some great teaser bites the last few fishing days with the Legend Lures black head Piper being the hot teaser, from the 8 marlin bites 5 have come up on the black head and one on the chrome head Krakatoa, the other 2 ate the rigger baits. Great teasers, they work….