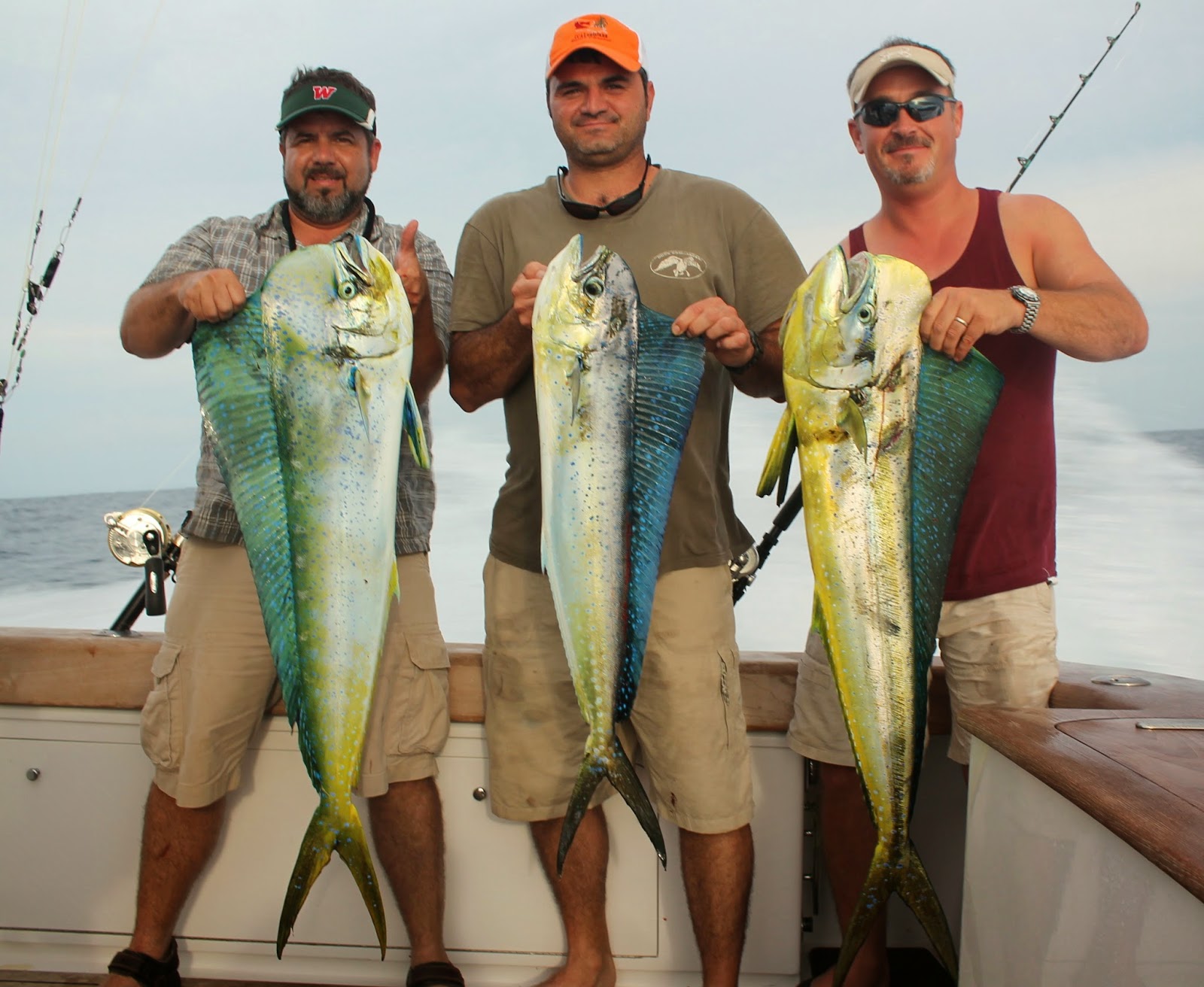 Dustin Hoffpauir, Nick Mayon and Jamie Tarpley
Sept 8th through the 10th we hosted the above group with Dustin from Houston and Nick and Jamie from Lafayette aboard ALLURE II. This was their first offshore experience, hunting for billfish at least, and we got on to the fish every day. A little tough when you’re the only boat out there though we found fish and had great weather with a big body of beautiful blue water pushing in the second day. 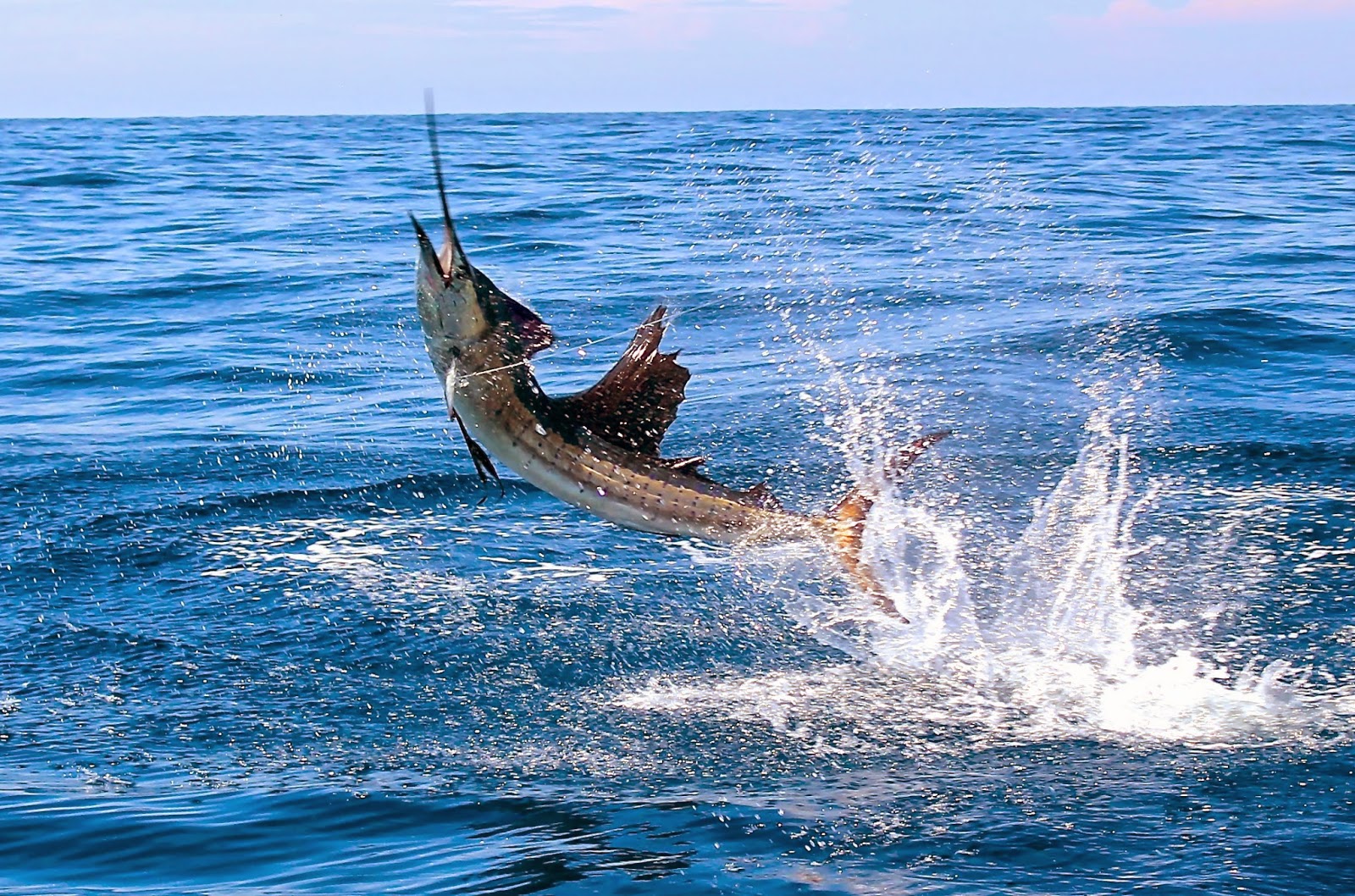 Great shot, beautiful conditions!!
First day on the water we found some nice water in the bottom western corner of the pocket, it was a small area that moved about 6NM during the day with green water pushing us to the west. We worked it hard and released 7 from 9 sails, boated a couple of nice mahi’s and missed a nice blue marlin in the 400lb class late in the day. 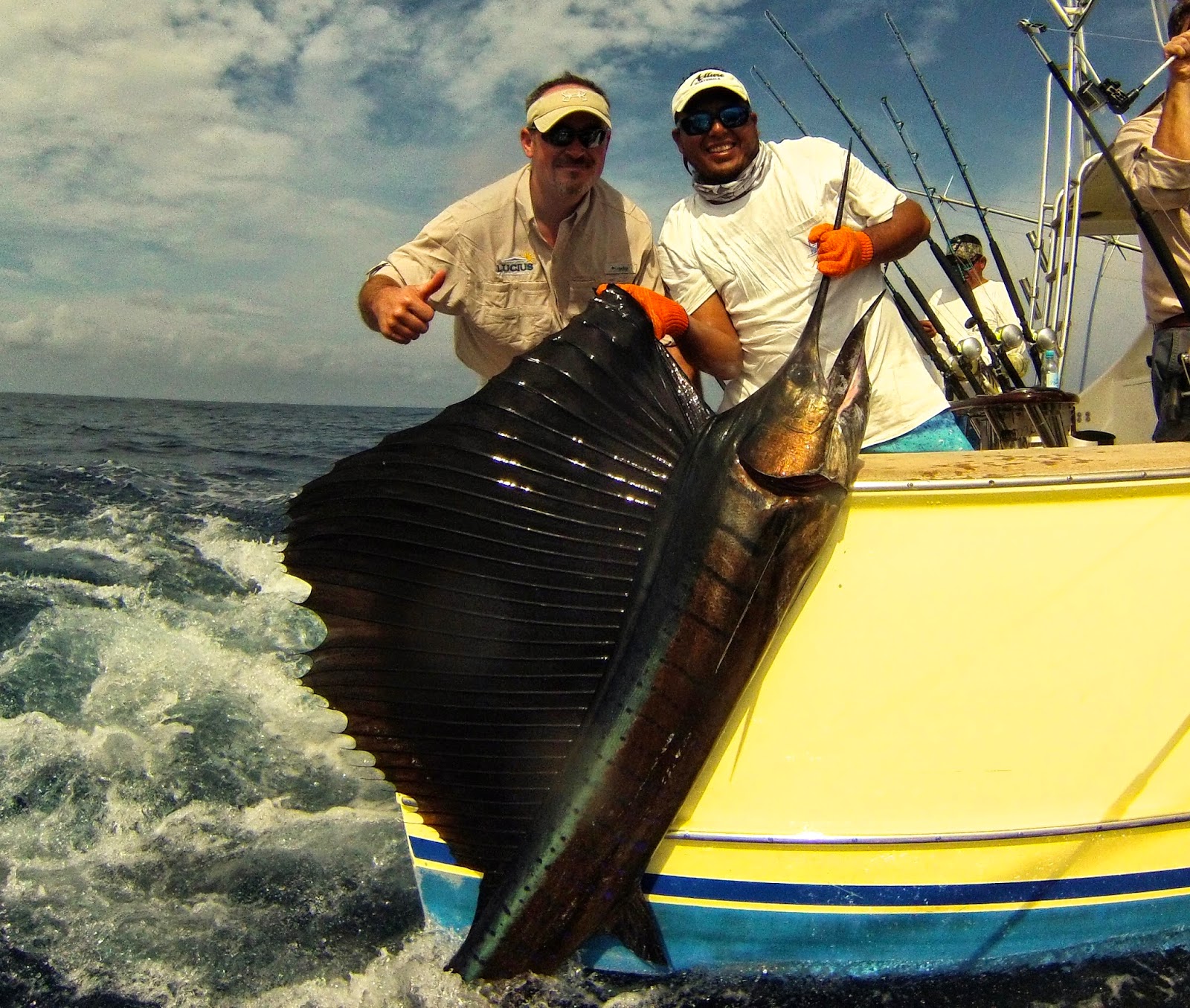 Jamie with his first ever billfish release.
Second day we went east looking for good water and found a new body pushing in from the SE. We worked to the SE and then across to the west side with the current. It was s slow morning though the guys got into them later in the afternoon and we had a great time out there releasing 13 sails from 20 bites as well a nice mahi for lunch, awesome day!! 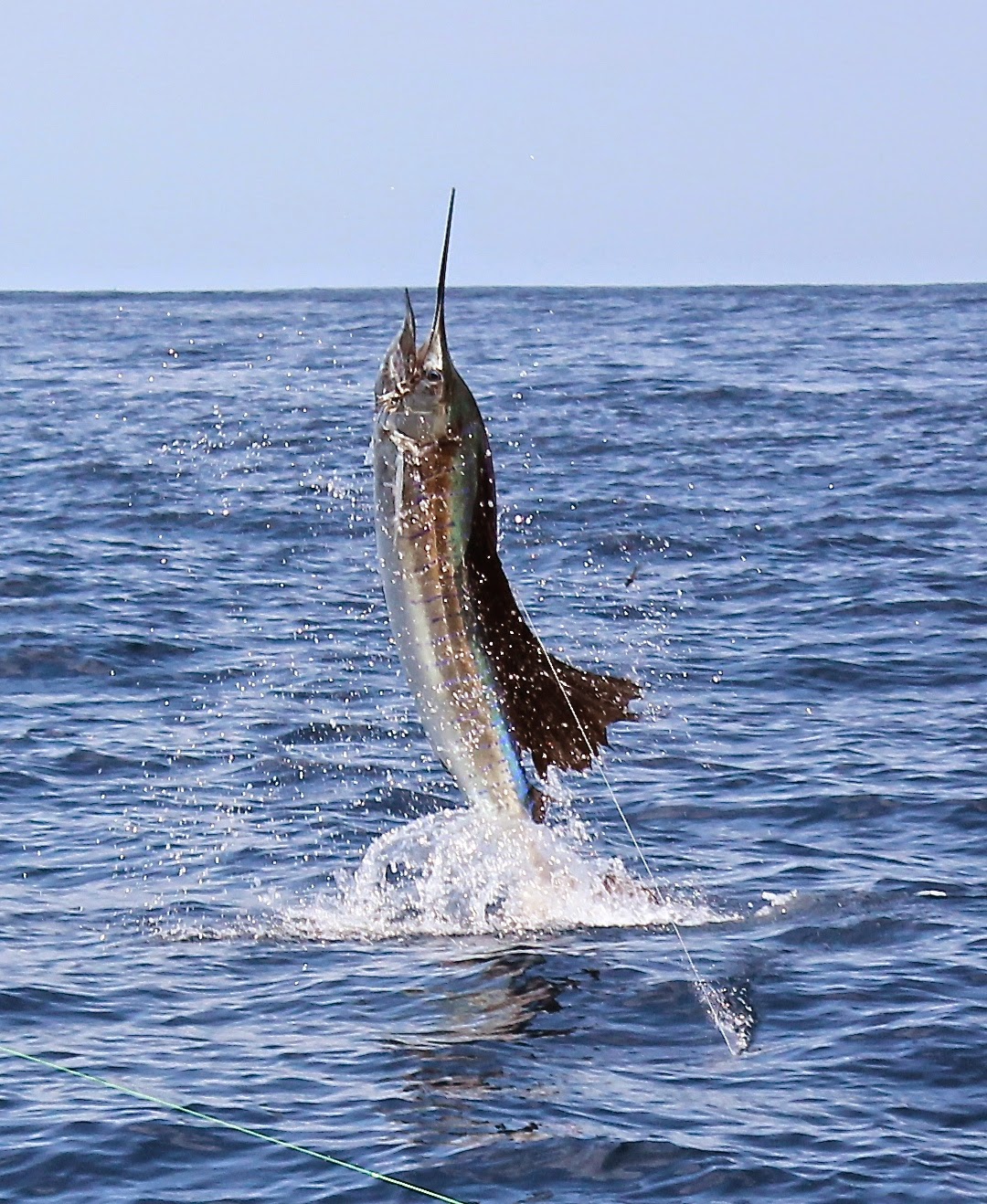 Another beauty…
Our last day out we were on a bit of a marlin mission, we worked the west side of the pocket hard covering the edge through varying depths. No luck on the blue one though another action filled day on the water non the less with 12 sails released from 17 bites and the mahi’s were biting hard today!! About 14 from over 20 bites on those, great sport and great on the table! All in all a helluva trip with 32 sails released from 46 bites, some great mahi fishing and a big blue on the short teaser that had everyone amped….. 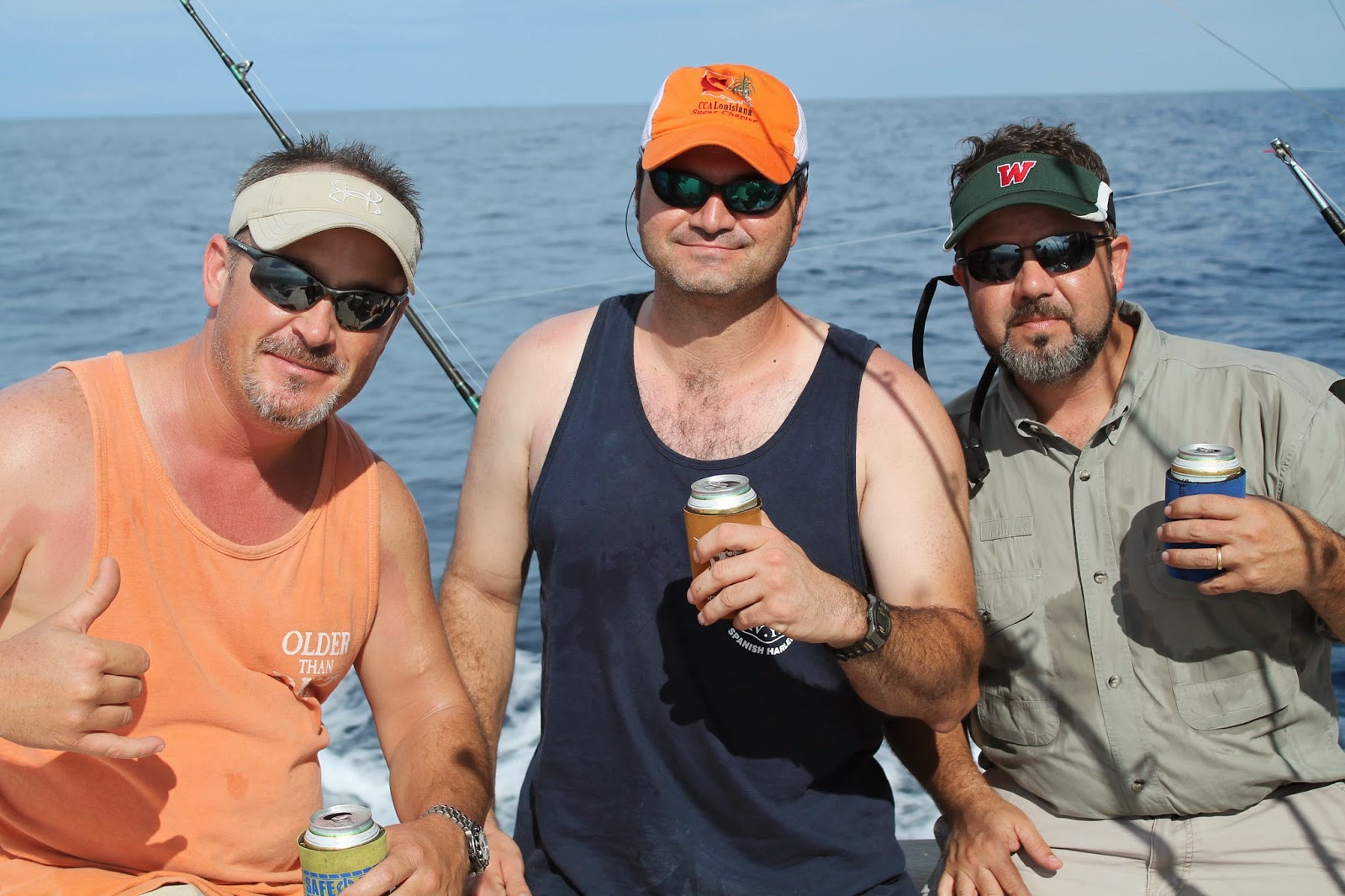 The crew enjoying a few cold ones….
And this from Nick, always great to hear good feedback from happy punters:
Chris,
Just wanted to take a minute to tell you how thoroughly, I enjoyed the trip. From the moment we landed until we departed all necessities of international travel where taken care of far beyond expectations. The staff is very professional, the food is gourmet, the environment is relaxing and the crew on the boat is top notch.
5 star service all the way around from land to sea.
I have friends who are charter captains and by fishing with you it is obvious you take great pride and passion in what you do. Awesome job my friend, I will definitely refer your service to anyone interested.
Nick Mayon
General Manager

Sept 4th and 5th we welcomed the Mike Gardner group from Austin, Texas for 2 days of fishing. The group of 10 split between both ALLURE and ALLURE II and for the majority it was their first trip down here to Guatemala. You gotta tell it how it is, and it was tough out there. We found nice water, covered a lot of area and then concentrated our efforts where there were a few fish seen. In the 2 days between both boats there were 4 blue marlin raised, 2 of them bit and one of them was on for a good 15mins and just 20ft from the release when the hook pulled. There were also 3 sailfish hooked and jumping that all fell off…..We missed them all, just plain bad luck from the ones we did get bites from, which was few. At least both boats had some reasonable mahi fishing!! We hope to see these guys back again and into what Guatemala is really about…

Right now we have closed the lodge for yearly maintenance and new construction, both boats are about to be pulled and go through their yearly up-keep as well. A busy time. We are counting down to late October when we’ll be back in the business of releasing billfish and looking forward to it!! Traditionally November and December are excellent months as far as numbers are concerned. The rest of the year is filling up fast so get in touch with us to secure your dates.