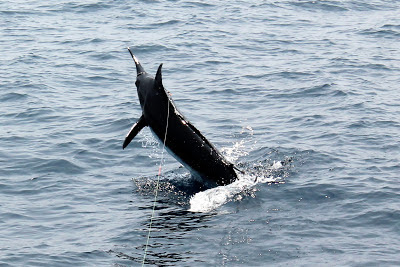 Fishing May 10th and 11th with local Panza Verde’an Javier Burga and his guests Harvey and Evan Gottlieb from New Hampshire and Thor Sheffield from the Key’s. Beautiful conditions both days, flat seas and blue water and the fishing was excellent. First morning trolling along the edge we landed a nice 20lb mahi, soon after that an aggressive blue of about 250lb+ crashed the short teaser and we got a great bite right at the transom with the pitched mackerel…..check it out:

Quick work had the mate help Evan out of the firing line, the boat couldn’t swing quick enough!! 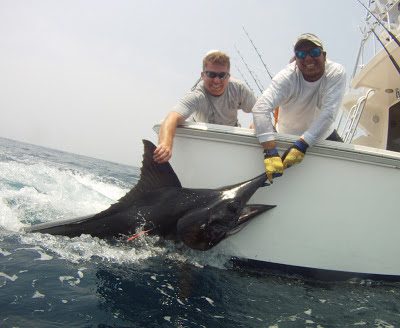 From there on in we found some spinner’s and had some great tuna fishing and the sailfish were biting as well with 12 releases from 18 bites. We ended up  boating 28 yellowfin tunas in total and 3 mahi mahi. Another highlight, on the second day out, we baited a sailfish off the short teaser, then all 4 tuna plugs went down, as we were coming to a stop another sailfish ate the rigger bait….a sextupleta hook-up….!!! We boated all four tunas then worked on the sailfish releasing them both. Harvey and Evan couldn’t believe the quality of the fishery here, by far their best fishing trip ever….. 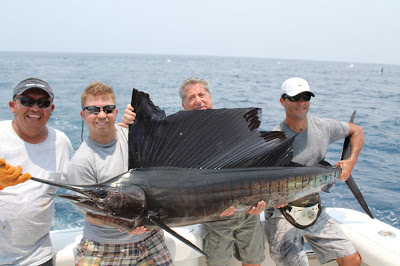 We’re expecting the fishing to stay on, as previously mentioned, and proved by this trip, this time of year you can expect this type of variety. Some good deals the coming months and we’re chomping at the bit to get out there……