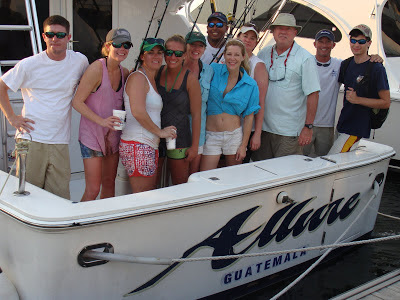 The Lucy Fisher organized group of Brooke Burge, Ashley Schneider, Sollie Thames, John and Barbara Richards, Mandy Trahan and Brian Yager, Brady Cluiss, Taylor Sullivan and of course Lucy Fisher herself came down to Guatemala fishing January 11th and 12th on board ALLURE and CAPT HOOK. The group had a great time down here and the fishing did not fail to impress either with quadruples, triples and double headers adding to the 91 sailfish raised, 87 bites and 66 releases as well as several big mahi’s. The group fished well with outstanding averages as well as releasing several sailfish jumping in with mask and fins. 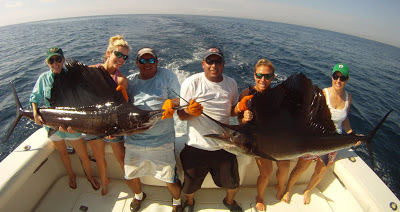 Brooke and Sollie with Ashley and Lucy and one of many double headers. 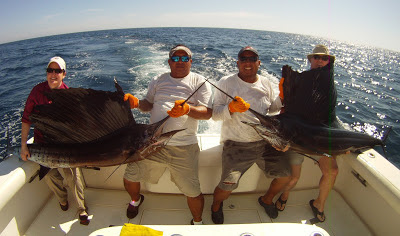 Barbara and John Richards with another.

Hearing of the great bite ALLURE co-owner Craig Johnson flew down on a whim with Steve Goodchild and Chris Collins. The fishing remained steady with 47 raises, 43 bites and 31 sailfish releases in 2 days of fishing as well as a few nice mahi’s including a big 35lb+er for Steve Goodchild that took some work to get in the boat. 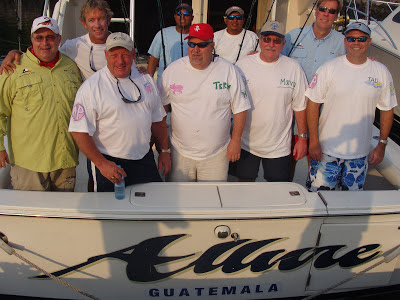 January 14-15th we welcomed back Chris Bean, aka Snr Frijole and Brad Klein to the Oasis and 2 days of fishing on ALLURE, this time with new-comers to Guatemala the teams as above with ‘Los Directores’ team Capt Chris and his team mates Tad Collier and Marvin Macip. Brad Klein captained team ‘Pork Bellies’ with Kyle Speyrer and Terry Vidrine. With both Chris and Brad having plenty of experience down here they coached their respective team members and had a tournament with a difference. The left side of the boat vs the right side of the boat, changing sides for the second day. 3 pts for a release, -1 for a ‘sancocho’ (missed fish) and double pts for a double header (same team only). With team Pork Bellies choosing the right side day one there was a definite list to port……and strbd the following day! We had a great 2 days of fishing and a bunch of laughs with the guys, and in the end it all came down to the last 3 mins of fishing. With lines out at 1600 in the last 3 mins we hooked a triple with ‘Los Directores’ scoring the double pts and winning 57 to 45 (The Pork Bellies sancocho’d 2 in the last minutes). Good times! In their 2 days of fishing they raised 60 sailfish had 56 bites and released 34 sails. Considering none of their team members had ever been offshore fishing this style they all did pretty damn well. 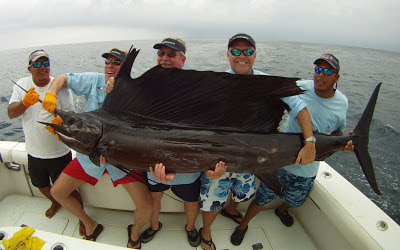 Winning team Chris, Marvin and Tad with a large sailfish……

The fishing has been good with a big body of fish out there anywhere from 3NM off the beach to 20NM to the west. Our last day out with Chris and Brad and crew we started fishing at just 3NM off the beach and released 11 in this area from 21 bites, then pushed offshore to where we fished the previous day and got into some multiples. On the ride back to the dock there were free jumping sailfish all the way in. Things are looking good!! We have a couple of openings in February, prime dates 4th-6th and 19th-20th, contact us to get into some incredible fishing

A few photos from some underwater releases……The crew had a blast fishing with the Fisher group….. 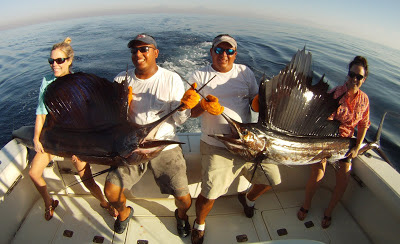 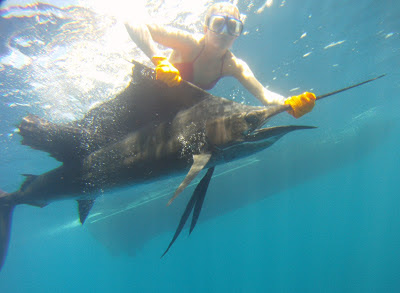 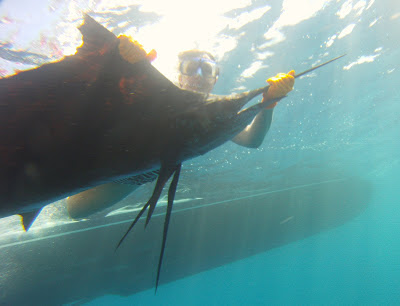 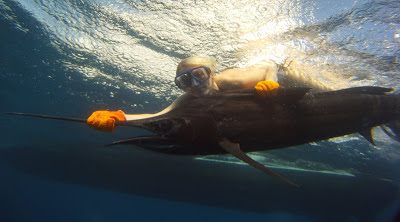 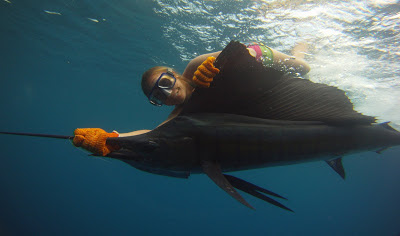 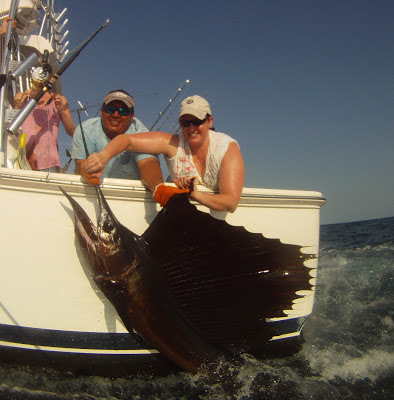 The girls kicked some butt out there fishing, had no fear jumping in with the fish and then proceeded to drink the boat dry of rum…….!!