As predicted the fishing here has started to pick up again with water temperatures offshore coming right, some nice blue water and we had a very good sailfish bite that started to turn on around the 12th of April. It coincided nicely for Brian Shinkle and Tim Lonsdale who were back for their second time to Guatemala this year after we fished with them in late January……. 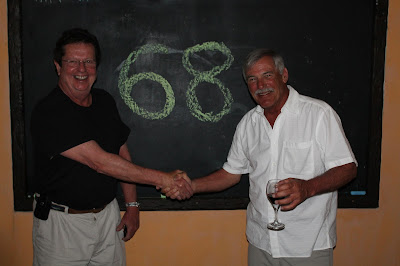 Tim and Brian congratulate each other after a great fishing trip.
The guys timed their trip well with the bite getting better every day fishing 12th through the 14th. We had great weather, flat seas and blue water for the 3 days and the fishing was steady throughout. First day started well with 16 from 22 bites, the next we had a couple more bites and better averages going 18 from 24.Things really started to pick up on their last day with the bite getting hot, the guys fished well and had a blast with 54 sails raised and releasing 33 from 48 bites…… 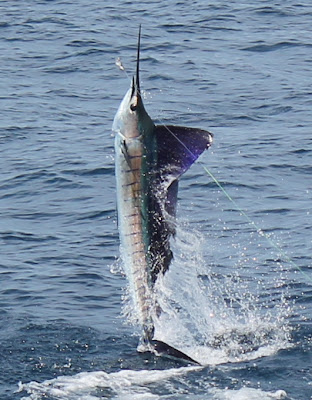 A great trip all round for Tim and Brian with 109 sailfish raised, 94 bites and 68 releases, along with one big mahi-mahi. 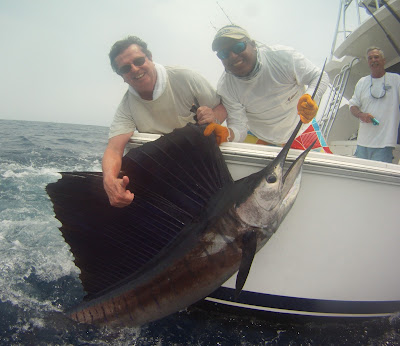 Good fishing and good times with a couple of hard-core fishos.

April 15th and 16th we welcomed Craig Hill down to Guatemala for his second trip, this time for his 60th birthday bash and 2 days of fishing on ALLURE, with his wife Janie and close friends and family Julie and Dr Gary O’Donnell and Sally and Dr Todd Matthews… 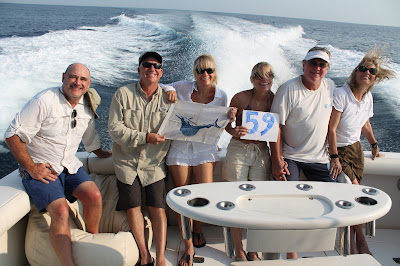 L-R, Gary, Todd, Sally, Janie, Craig and Julie with 59 sailfish releases.
Another well timed trip with the fishing out there being very good and a great introduction to Guatemala and billfishing for the rest of the crew. Spoiled for life now with a first day out total of 52 sails raised, and 35 releases from 47 bites as well as a nice mahi for Todd. 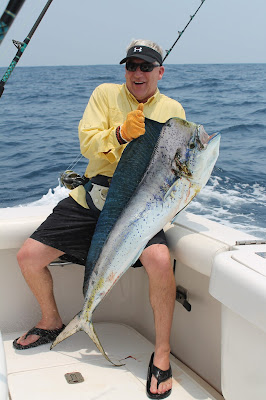 And the man of the moment Craig Hill doing a great job on the rod releasing the majority of the fish  for the trip with one of many….. 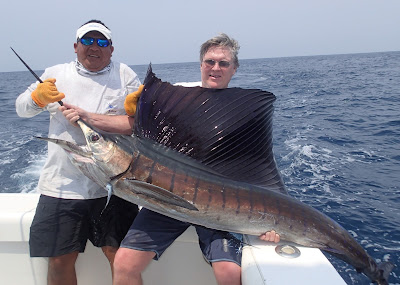 A nice one too!! The next day out started slow, trying to find the fish took a little longer than anticipated and by midday we’d released just 5 sails. With a goal of 60 sails for the trip, Craig’s 60th birthday today, things were looking tight with lines out at 3 for the ride home. We started to get into some fish after 1.00pm and started the countdown, it still looked tough though we were getting some bites with the occasional multiple and with just a few minutes left till lines out we had a 2 day trip total of 56 sails released. Right about then we raised a quad of sails and it looked on, we managed to get 3 out of them and finished with 59 sail releases for the 2 days of fishing, add in one big mahi and a total of 60 fish for the trip. Helluva trip and congrats Craig and crew with 24 from 32 bites today. April 19th-20th we welcomed Jim Thorpe, Cliff Reckling, Kelley Erwin (also down for his second trip this year), Mike Persha, Frank Erwin, Holden Wallace and Gill Cheesman who’d also fished with us and instigated this trip to Guatemala for the crew. Fishing had slowed some from the previous week though it was still good with a day one total of 15 sailfish releases from 26 bites. The second day out half the guys went to visit Antigua for the day with Mike Persha, Cliff Reckling and Kelley Erwin deciding to head back out wide for another day on the water. Looking for a marlin today we went out to the drop off and marked plenty of bonitos at about 20-30ft down, right on the edge. We hooked a couple of these, put them out as live baits and within 10 mins had the one we were looking for on with Kelley doing a great job on the drop back, hook up and rod. The fish was a tough one too, putting on a show before getting him boatside, tagged and released…. 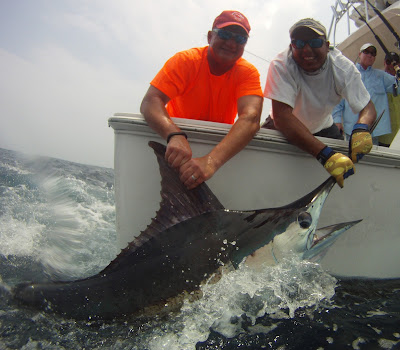 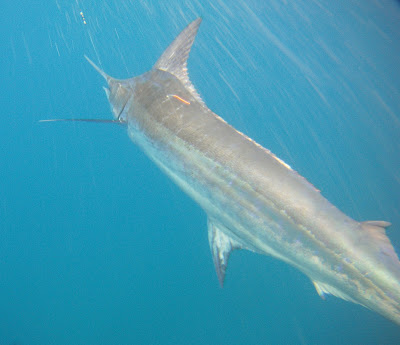 And back to the deep.
We spent a bit more time working the bonitos trying for another blue with little luck and released 2 from 2 sails before calling it a day for a total of 17 sails from 28 bites and one blue marlin for the trip.

Still some very good fishing to be had out there with the bite the last couple of days picking up once again. April and May right through August tend to be great months with more marlin seen, good sailfish bites and more tunas and mahi’s than average in these months as well. We have some deals for the summer, so get in touch and we’ll make sure you have a great trip.