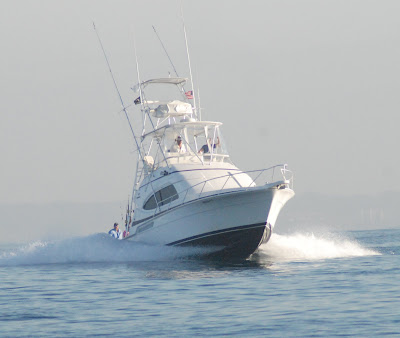 Smooth seas and great fishing…..ALLURE on the way out…..
Friday 17th Feb, Hill Dishman arrived a couple of days before the rest of the group to get in some time on the fly and spend some time looking for the bite….We sarted the day just 8NM from the breakwall and after half an hour of pulling teasers we raised a blue marlin on the flat line teaser. The fish teased in, albeit slowly and disappeared just before casting range, we pitched the mackerel though never saw it again. For the rest of the day we trolled up the western side of the ‘pocket’ and found some pretty good action in the afternoon raising 16 on the teasers, mixing it up we went 4 for 6 on the fly and 8 from 8 bites on the bait.
18th, with the current pushing to the east and wanting to cover some ground we fished the majority of the day up the eastern side of the pocket looking for a 1000lber and a bunch of sails……we found neither…..raised 9 sails got 2 bites on the fly and released 1 from 3 on the bait. At least we knew where not to go the following day…. 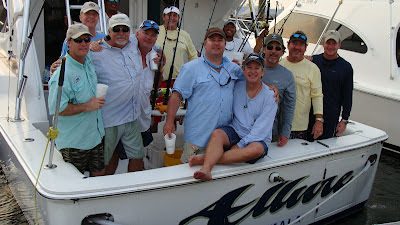 L-R Dean Lane, ‘Goose’ Lavikka, Jim Franklin, Craig Johnson, Cullen Spitzer, Matt Rotan, Hill Dishman, Beaver Alpin, Scott Cone, and Keith Porter
ALLURE owners Craig Johnson and Hill Dishman hosted the big group down for Craig’s birthday February 19 and 20. Mixing it up between 2 boats, the 61ft Viking ‘BOLITA’ and ALLURE the group experienced good fishing and had a great time down at the ‘OASIS’. Over the 2 days on the water between both boats we raised 110 sailfish with 102 bites and releasing 59 sails as well as ‘Bolita’ having the marlin hum raising 2 blues and releasing one 300lber for ‘Goose’ Lavikka. We also nailed some nice bull mahi’s with Craig Johnson getting 2 near identical sized beauties from the 4 mahi’s boated…. 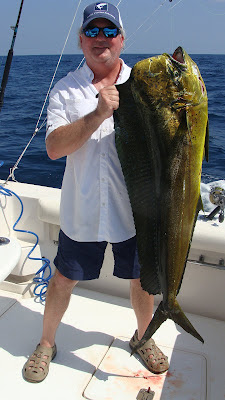 On ALLURE we finished the last day out with a little mayhem raising a quad and releasing a triple out of 4 bites with the Legend Lures # 12 Piper doing the majority of the damage today…..hot teaser, 2 of the quad were hot after it’s tail and we got great bites off both of them! 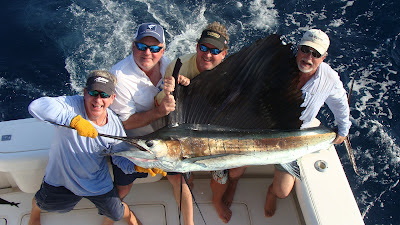 Hill, Craig, Scott and Jim with the last sail of the trip
Feb 20 and 21 we welcomed first timers to Guatemala Russell Harbison, John Manning and Craig Williams for 2 days on the water and 3 nights at SAILFISH OASIS. Russell had never caught a billfish before this trip and ended up with a bunch of sails released on conventional tackle and a couple on the fly. Over the 2 days of fishing we raised 76 sails and had a nice blue marlin that came up on the white head Legend Lures Piper though did not switch to the pitched mackerel. Late in the day we switched it up on the fly and all the guys got into their first sail releases on the long wand. Exciting stuff, with some incredible bites……Thanks for some great shots John! It’s all about the bite….. 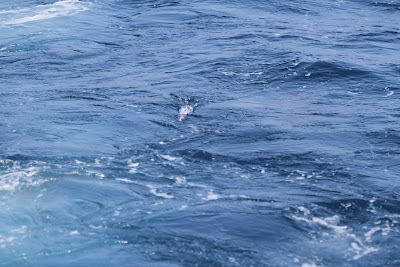 Fly in the water 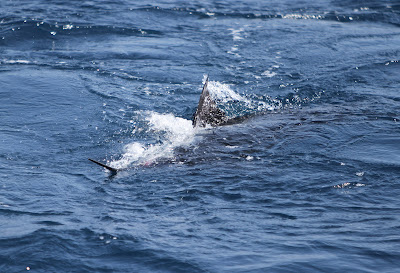 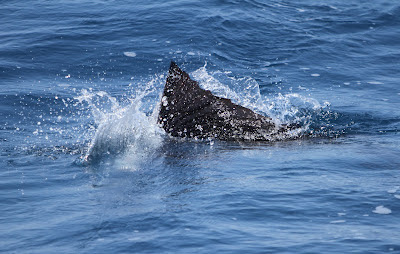 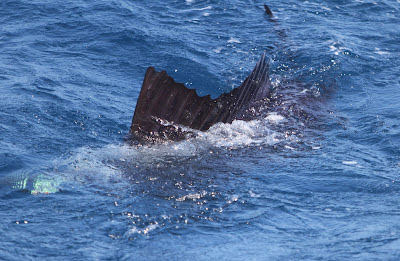 Great bites resulting in these….. 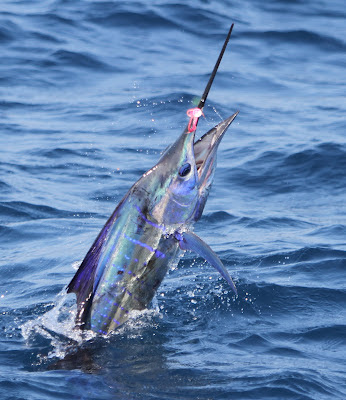 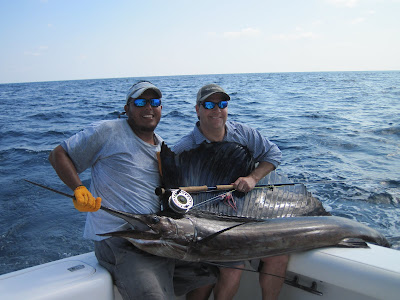 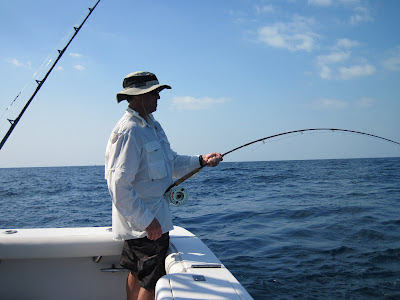 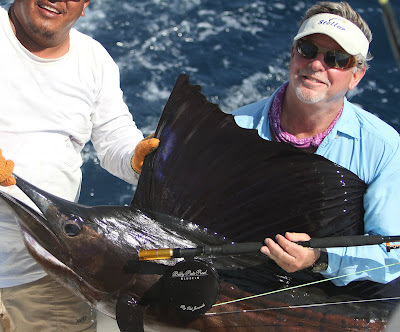 Russell Harbison on the fly

From here we had a couple of days in before welcoming more first timers to Guatemala, from Victoria, South Texas….
KISALUS GROUP 53 RELEASES IN 2 DAYS 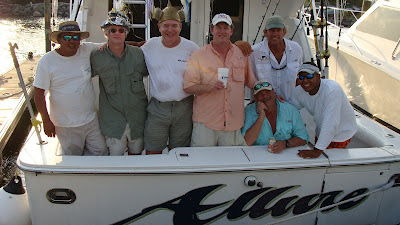 L-R Bob Oakley, Kelly Park, John Kisalus and Dale Jones with the crew
Feb 25th-26th Experienced fisho’s from the Gulf these guys were hands on and good fun to fish with, they timed their trip well with a great bite here in Guatemala. Over the 2 days of fishing we raised 87 sails and returned with the good averages of 53 releases from 78 bites!!! Our first day out was mostly teaser action with the majority of the sails hot on the teasers, the #12 chrome head Krakatoa definitely the red hot teaser for the day, and we had some great aggressive bites to the switched ballyhoo right behind the transom. Things slowed down a little on the second day with an even mix of rigger bites and teaser bites though still great action all round with a couple of triple headers and several doubles for the day…… 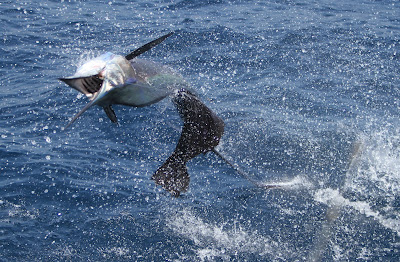 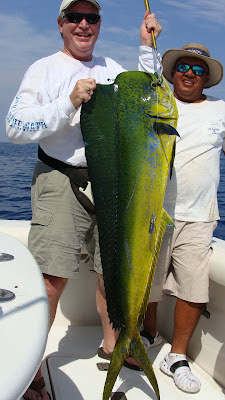 As well as this nice mahi for Kelly.

All groups commented on the beautiful setting, great accommodation and exceptional food down at the ‘OASIS’. The fishing is second to none and everyone is talking about return trips. It’s all good in Guatemala…….