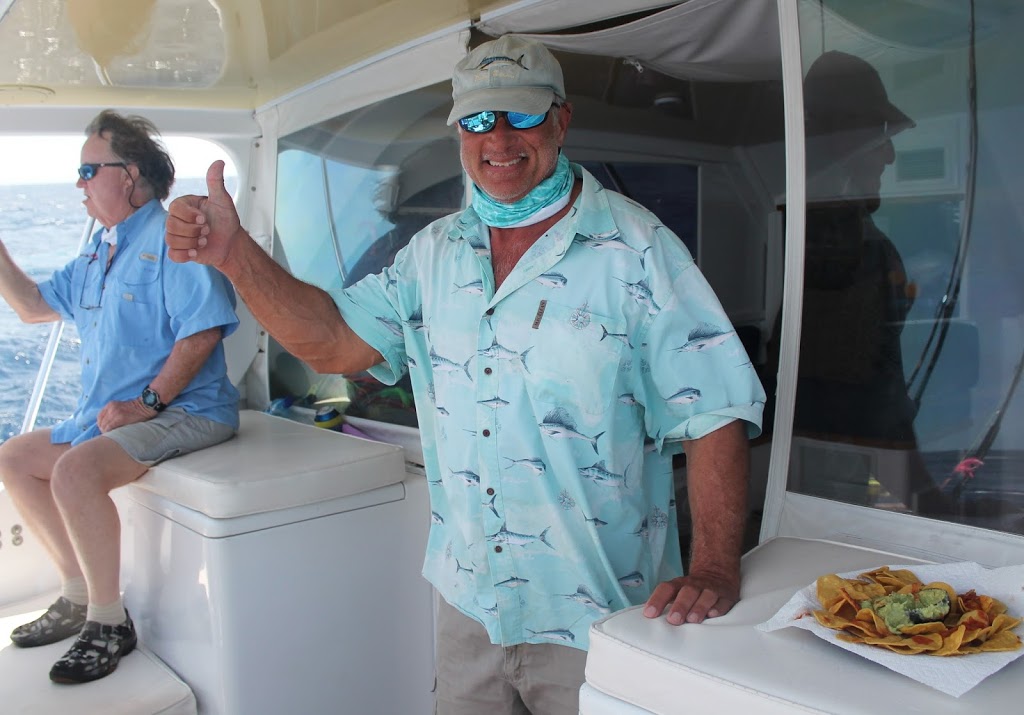 Bobby Richter with Woodrow Thompson in the background
February 22-25 we welcomed back Bobby Richter and his crew of James Preis and Jonathan Meyer who this time introduced Woodrow Thompson to Guatemala, Sailfish Oasis and Allure II. Always a fun group to fish with these guys, never short of a laugh. Got into the fishing pretty good as well, first day out we released 11 before 1100 and switched it up to a mix of fly and conventional. From the next day on it was all fly with 26 sails released on fly and 17 on the conventional for their trip. Good fishing! 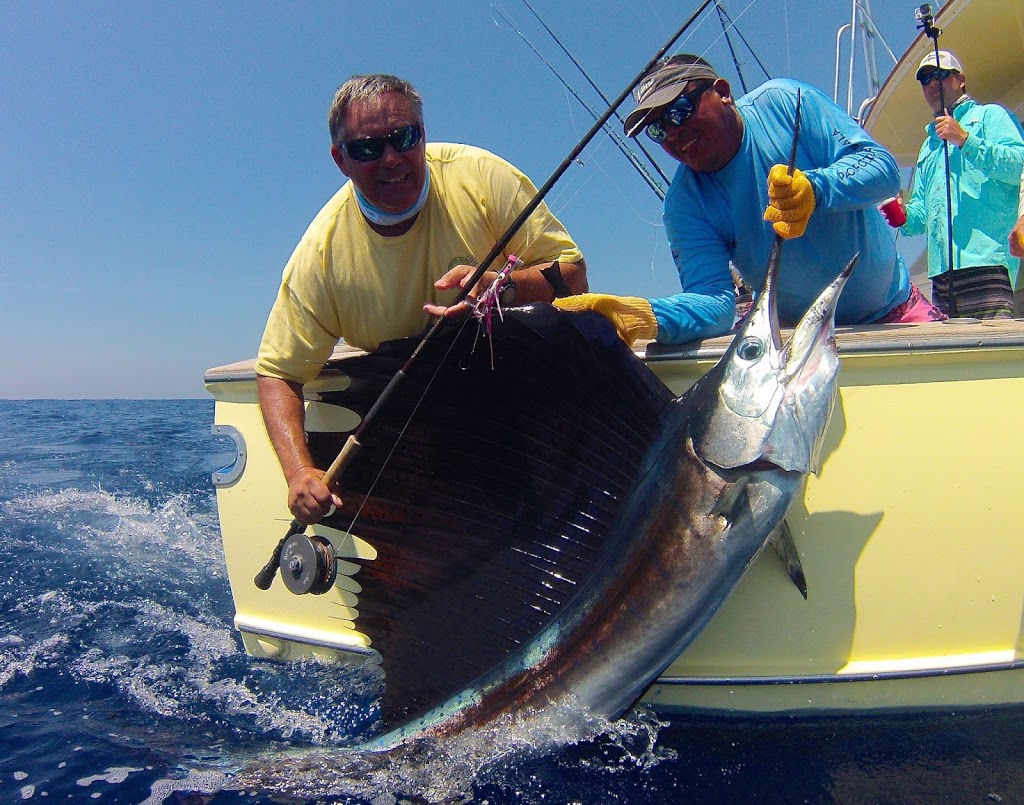 James Preis with one of many on the fly 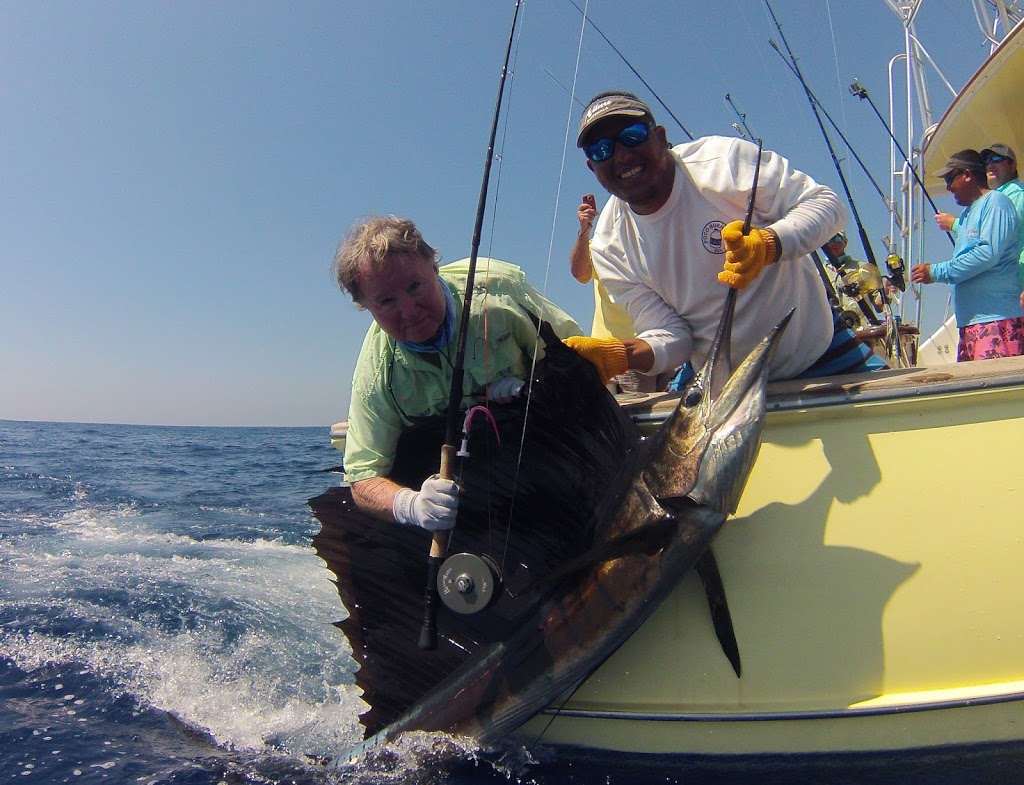 And Woody with his first ever on the fly. 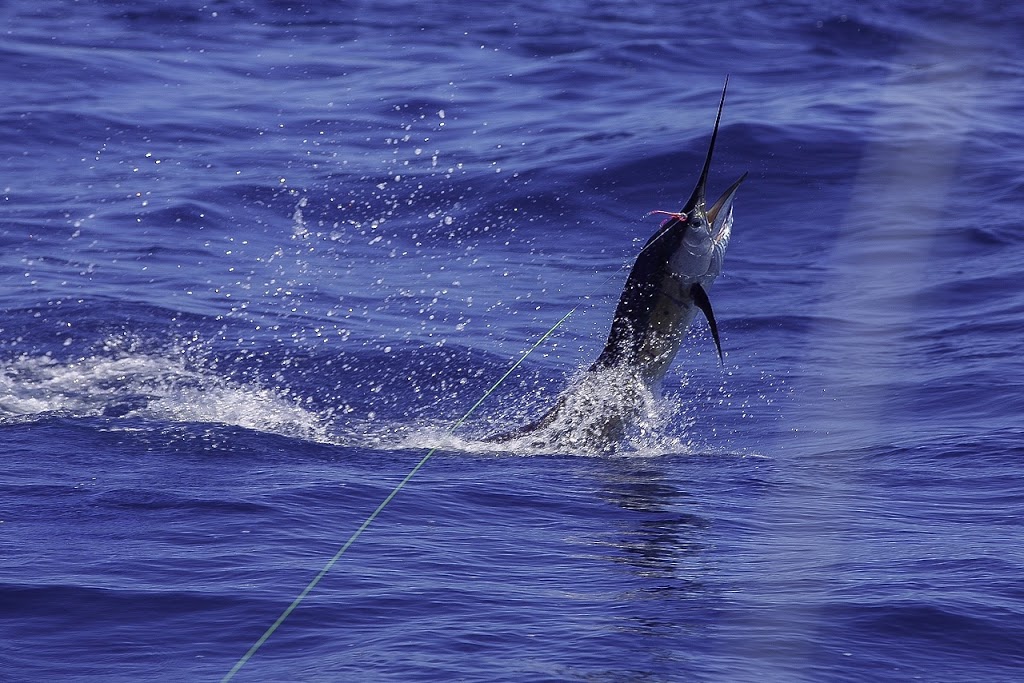 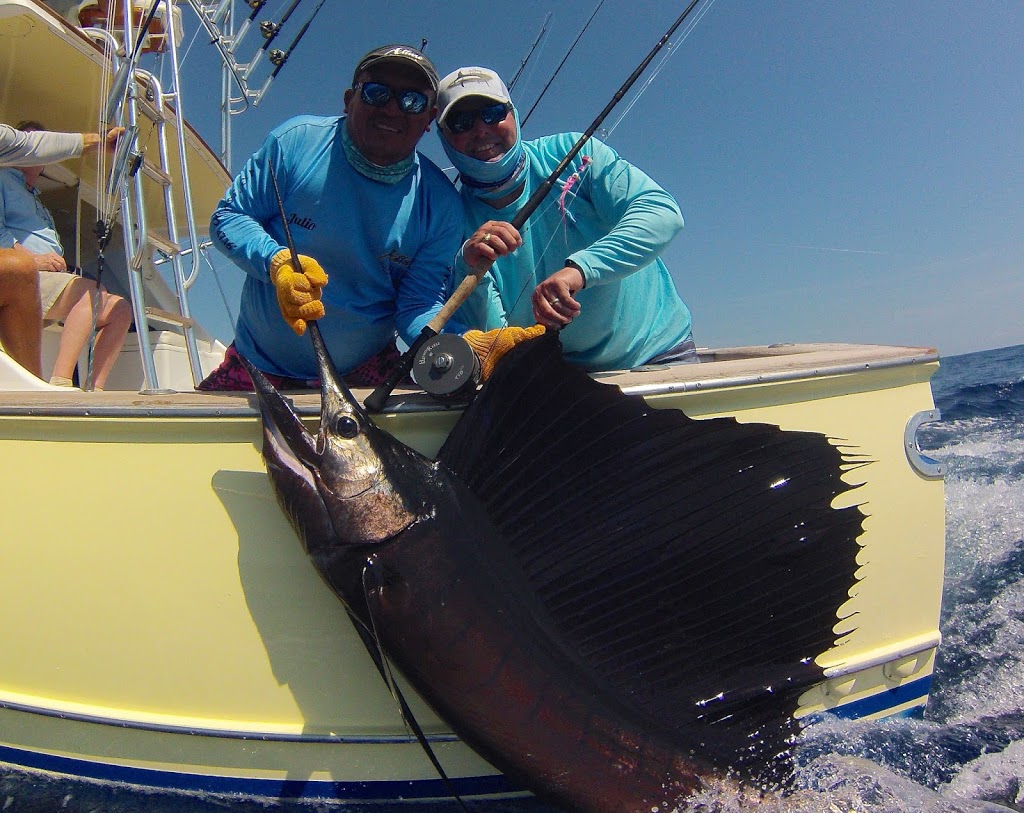 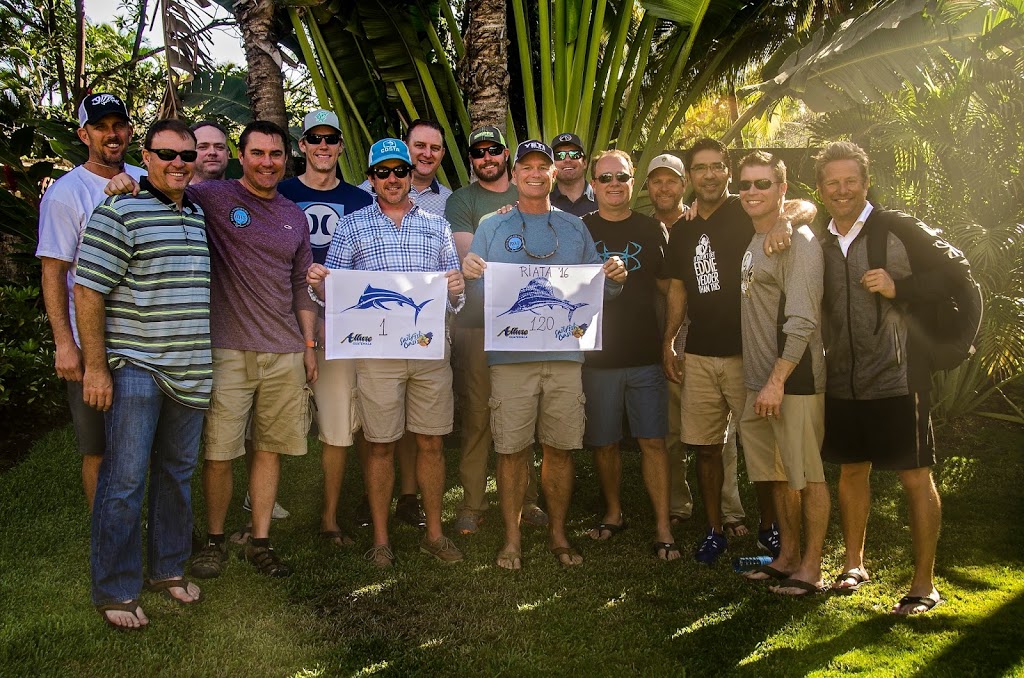 Feb 26th & 27th we welcomed back for their 2nd time to the Oasis, Riata Hunting and Fishing’s, Mike Gardner and his crew from Austin, Texas for 2 days fishing here in Guatemala. Fishing aboard Allure II, Capt Hook and Makina the guys experienced an awesome bite with 120 sailfish released. 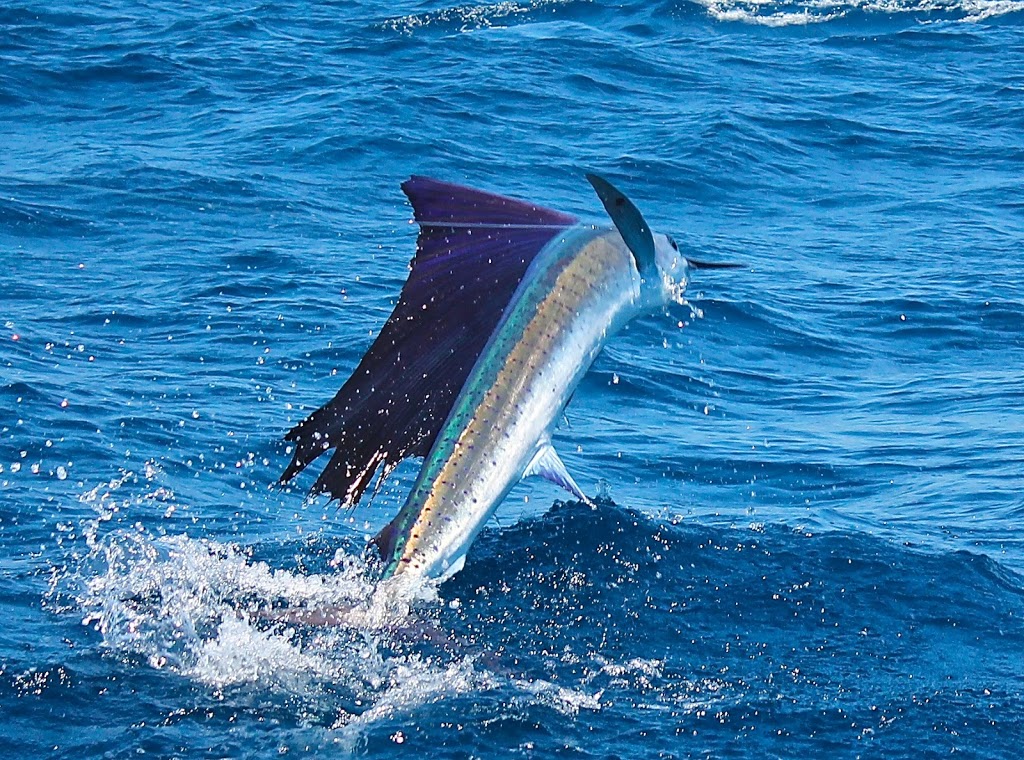 Great averages of 20 per boat per day and last day out we went 1 for 2 on blue marlin as well…!! 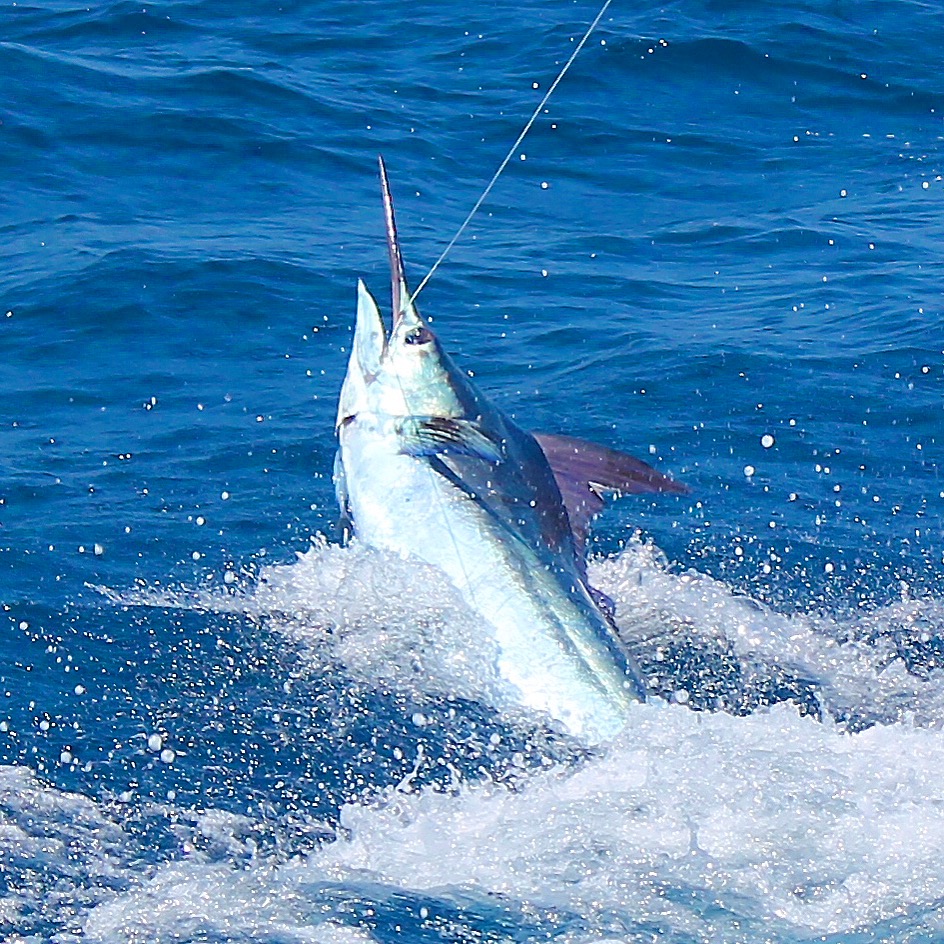 Mike guides hunting and fishing trips all round the world and is already looking at bringing in more groups for next year which says it all. ‘A+ experience!!’ 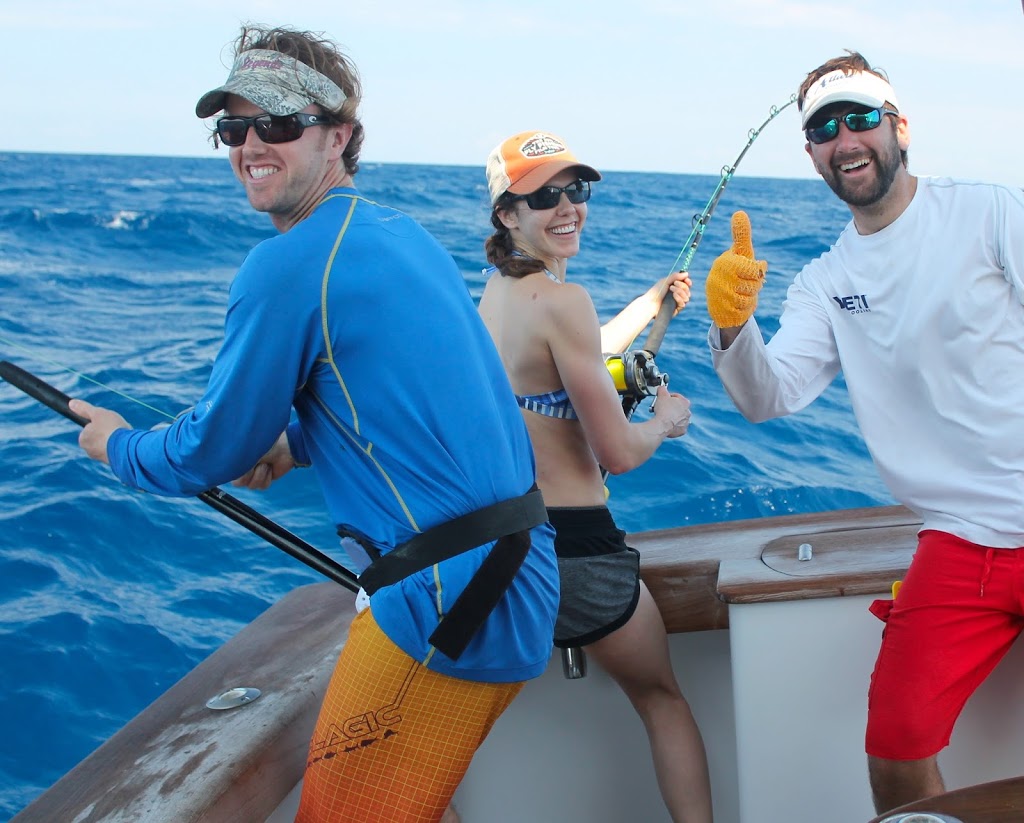 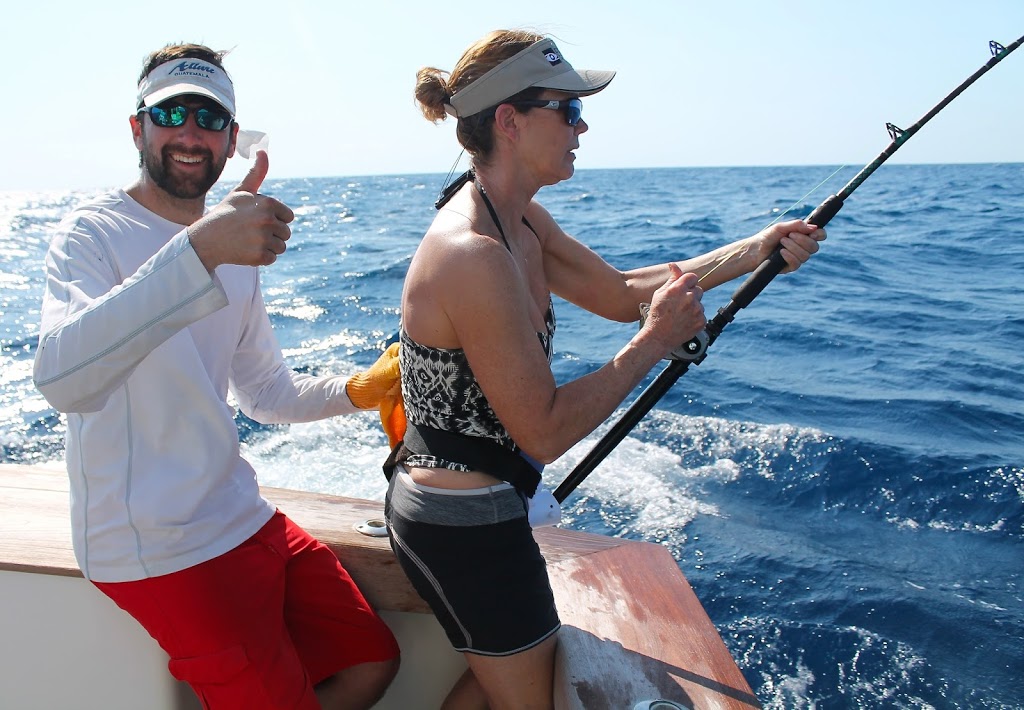 And Casey with Becky
First day out we worked the bottom of the pocket hard in search for a blue marlin, then moved to the west of the pocket where the fish had been the previous days. Kind of tough, we did get the bite from a nice blue though unfortunately broke it off, we raised another that did not bite and released 2 from 4 sails for the day. Next day we went out wide looking and got into them pretty good, more or less found them straight away. An awesome day with a couple of cover-ups in the 63 sailfish raised, we got 56 bites and the girls did an awesome job baiting their own fish off the teasers with Morgan claiming rights to the largest fish of the trip… 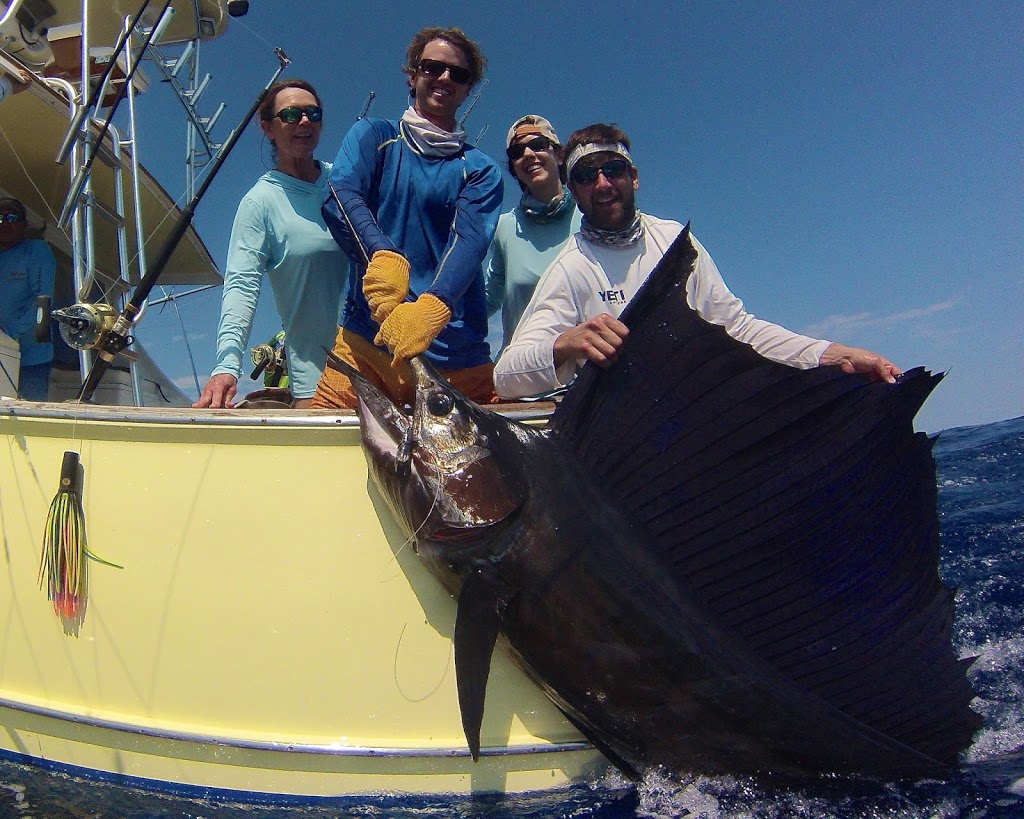 The boys are claiming it, though Morgan baited and caught it…
We released 31 today. Glad we got into them, a great way to finish off their trip. From here on in they climbed Volcan Pacaya, hiked to Lake Atitlan and enjoyed some time in Antigua. There is more to Guatemala than just the best bill fishing around…. 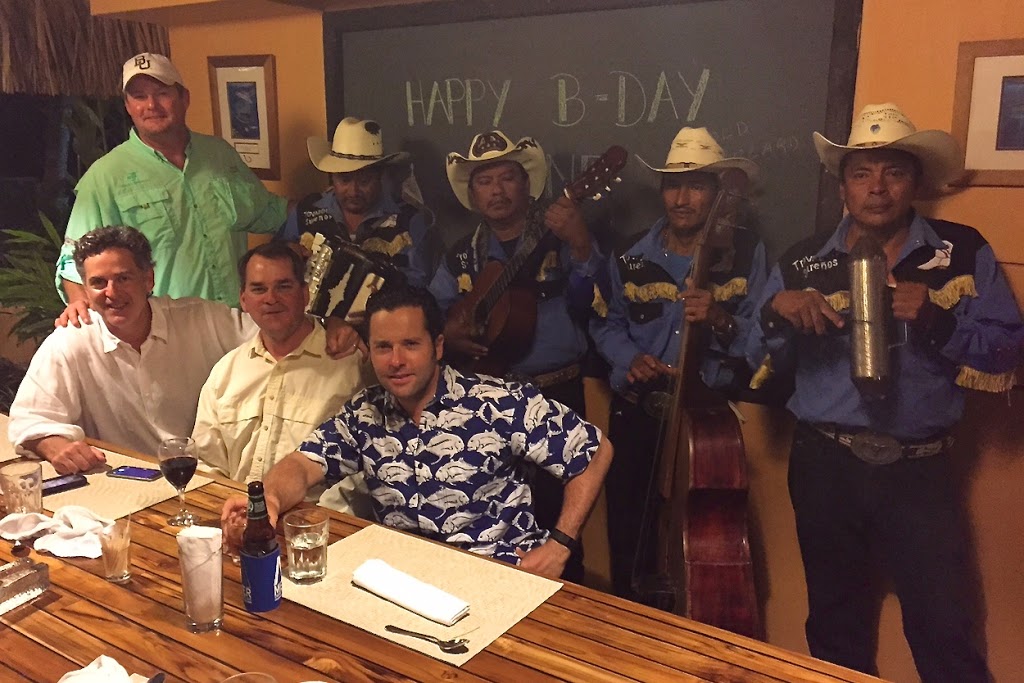 L-R (standing) Todd Reppert, Robert O’ Brien, Wayne Gross and Carlos De Aldecoa with Mariachis.
March 1 & 2 we welcomed the above group for their first Guatemalan experience…..at least offshore….that coincided with Wayne Gross’ 50th birthday, celebrated at the end of the day with mariachi’s, Zacapa rum and Ilegal mezcal margaritas. We got into some good fishing both days finishing the first day on a huge bait ball with spinners and a couple of finbacks feeding which we managed to land 5 yellowfin tunas off. Next day took a while to find the fish though got into them good from 1130 on. Some big fish in the mix!!! 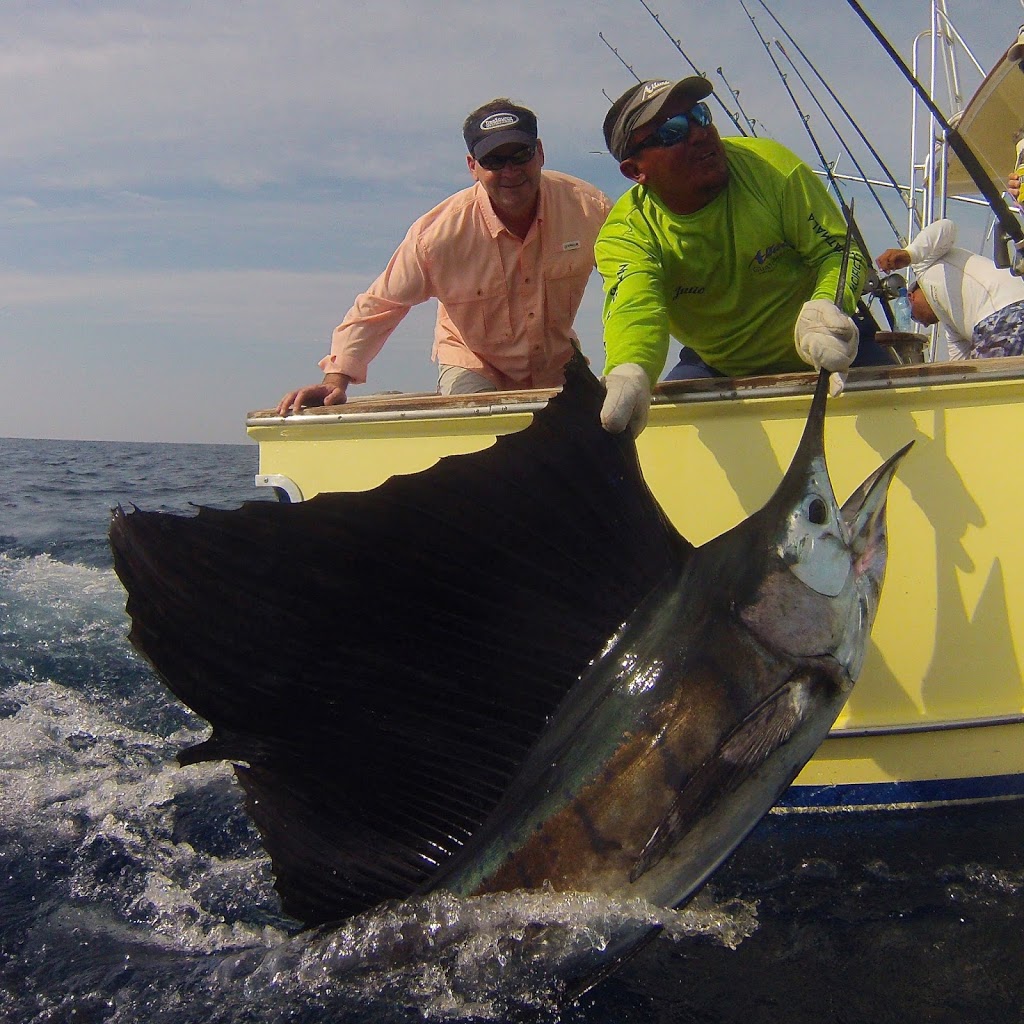 Wayne with a large specimen
We had a great afternoon out there, some of these sails were marlinesque in their size and their attitude!! Some hard, tough fighting fish in the 25 released from 34 bites. 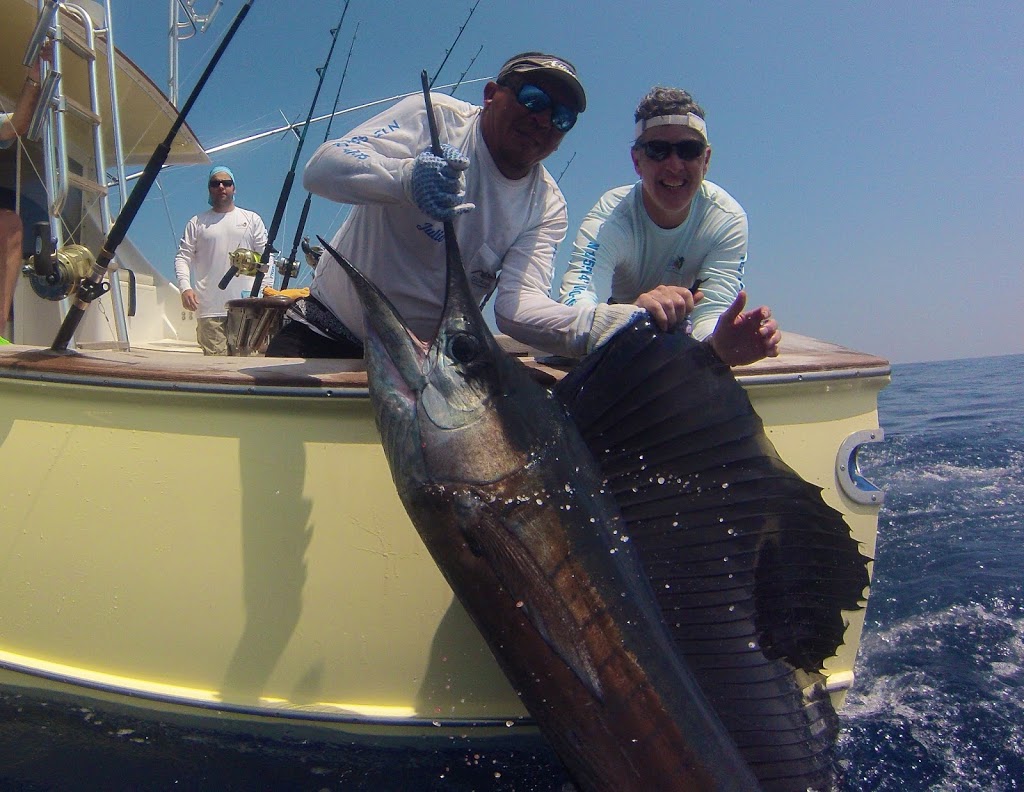 And Robert with another….
Good times with these guys and looking forward to seeing them back down here again soon.
We had a couple of days in so managed to get over to Ascension Bay and meet up with Patrick Duke from Art and Angling after fishing him here in Guatemala a couple of weeks back. He got me into some of the great flats fishing they have over there while hosting a trip to the Palometa club. 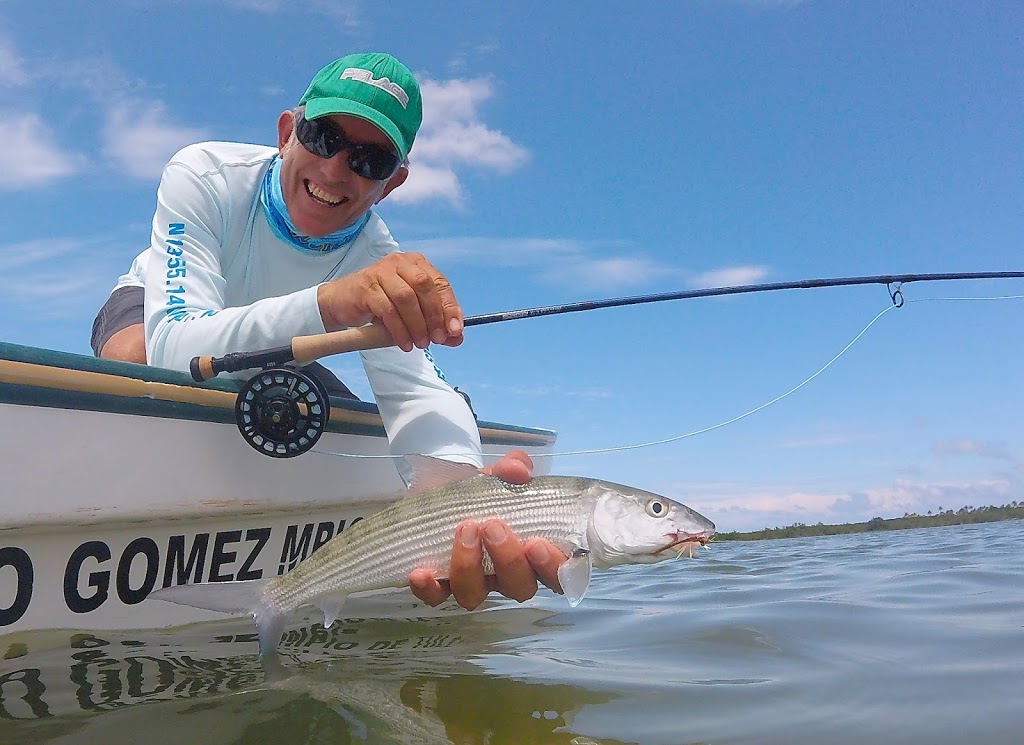 A couple of bones on the fly 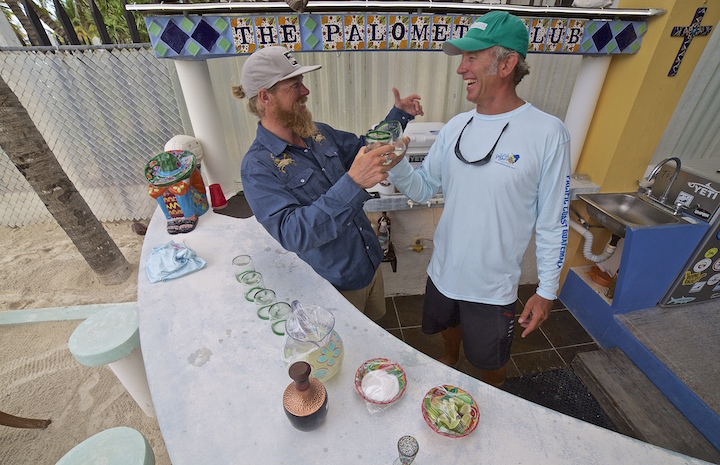 And testing the local tequila
Last Wednesday his group released 11 permit on the fly. Awesome spot over there.
We are back out there offshore in Guatemala this week. There are a couple of days open end of March and then in May the marlin bite normally heats up and we have some great weekend dates available. The summer months we plan on targeting blue marlin on the fly. Get in touch if you want to get into it!!
liz@sailfishoasissportfishing.com