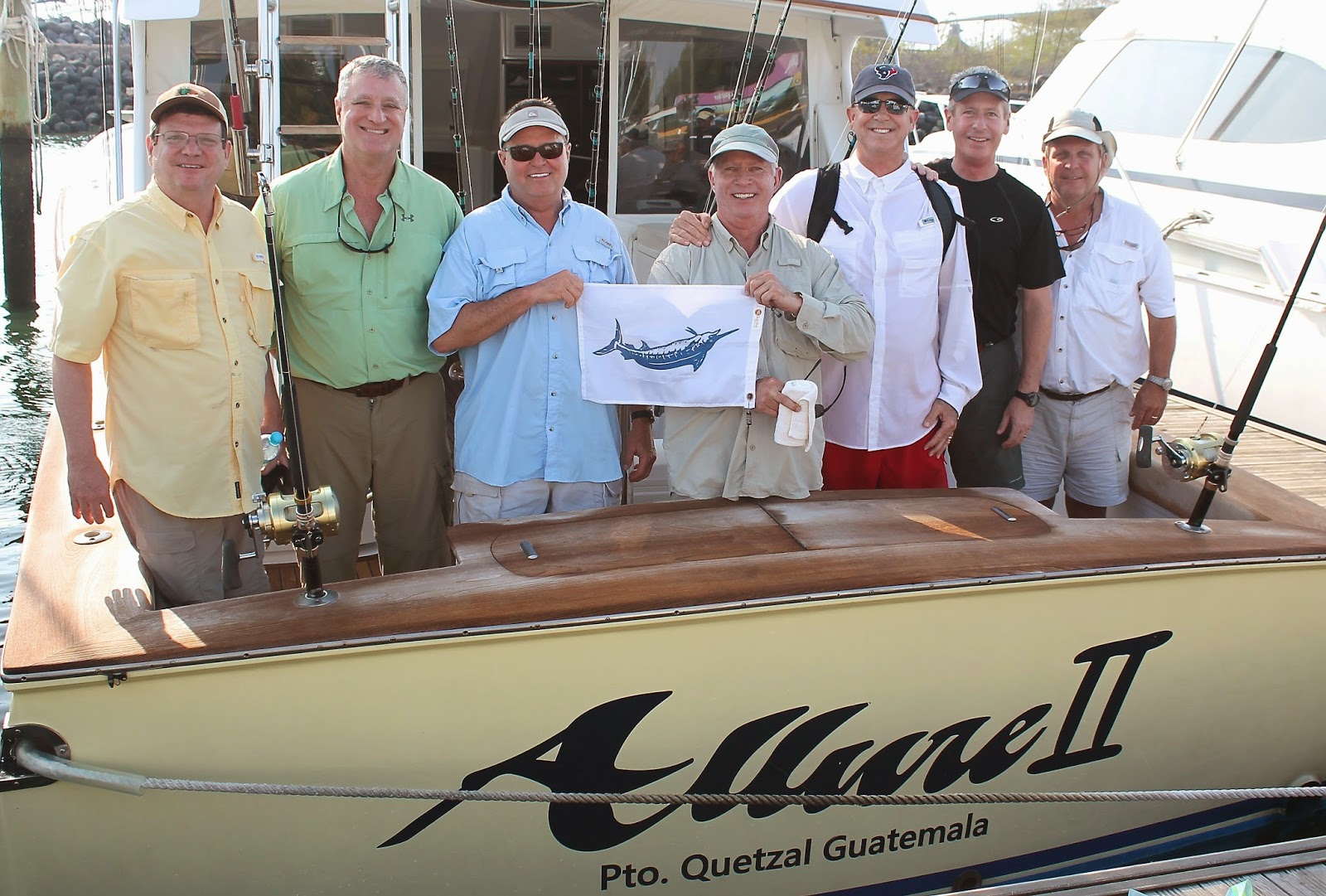 February 27th and 28th we fished the above group including brothers Bill and Noel Goulding, Alan and Dale Campbell, and Paul Redman, Gary Casswell and Chris Boeker. Fishing on ALLURE and ALLURE II we got into them pretty good the first day out to the east around 28NM from the breakwall. The day started well and continued on till around just before lunch when we hooked a double header, one sailfish for Chris Boeker and a blue marlin of about 250lb for Dale Campbell. The fish split us though with some persistence we got the release on the sailfish and then worked on that blue. Well every fish is different and that was one tough SOB on the 30lb for Dale, trying different angles and pushing up the drag we finally got the release after 1 and 1/2 hours after hook-up!! 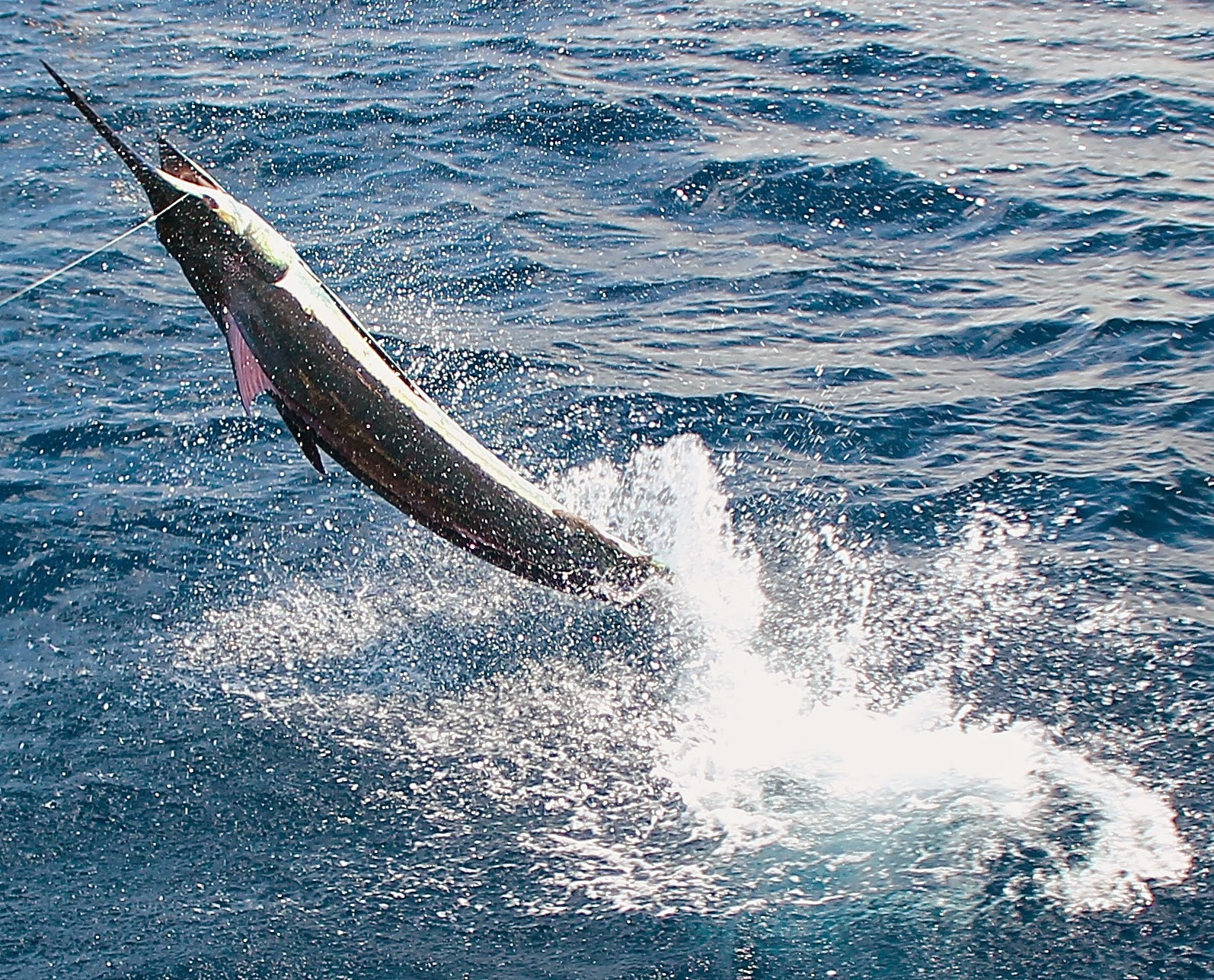 The afternoon bite then really turned on and we ended up with 27 sails and the blue marlin. On Allure the same amount of bites were had with 22 releases and a big blue of about 500lb+ that came up on the teaser though didn’t switch to the pitched mackerel bait. The blue water was pushing in pretty good so then next day we ran to the first drop here just 9 NM off the beach. In beautiful blue water we had one bridge teaser in the water and hadn’t even got the 2nd rigger down when 2 hot sails were hot on that 1 teaser! We released them both and spent the rest of the day working the drop off to the west. Good fishing again for the guys with ALLURE having the marlin hum today, they raised 2 blues that didn’t bite and had a black marlin on for about 15min when the hook pulled…..bad luck fellas. Though nice going all ’round with another 34 sails released today between the boats… 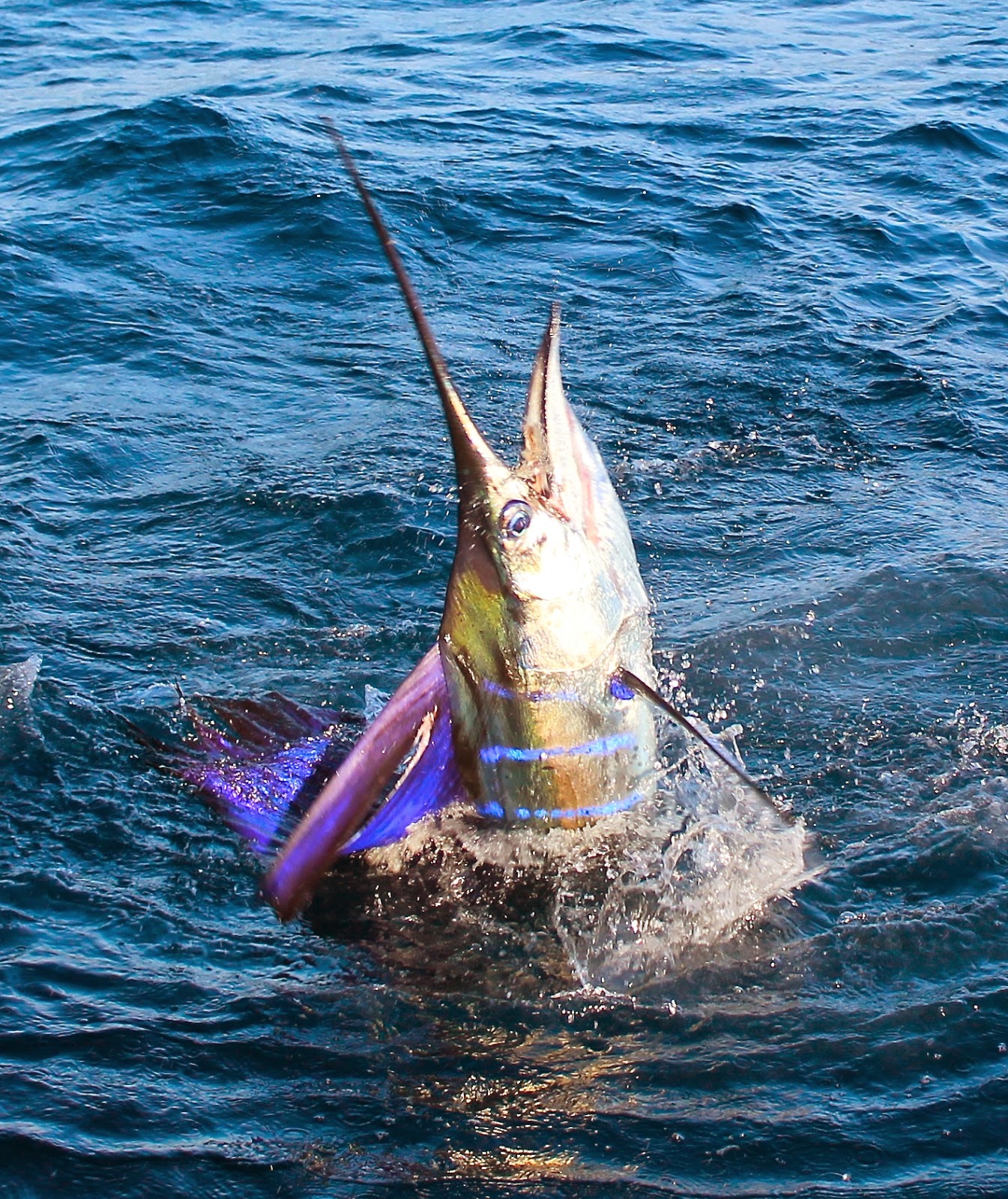 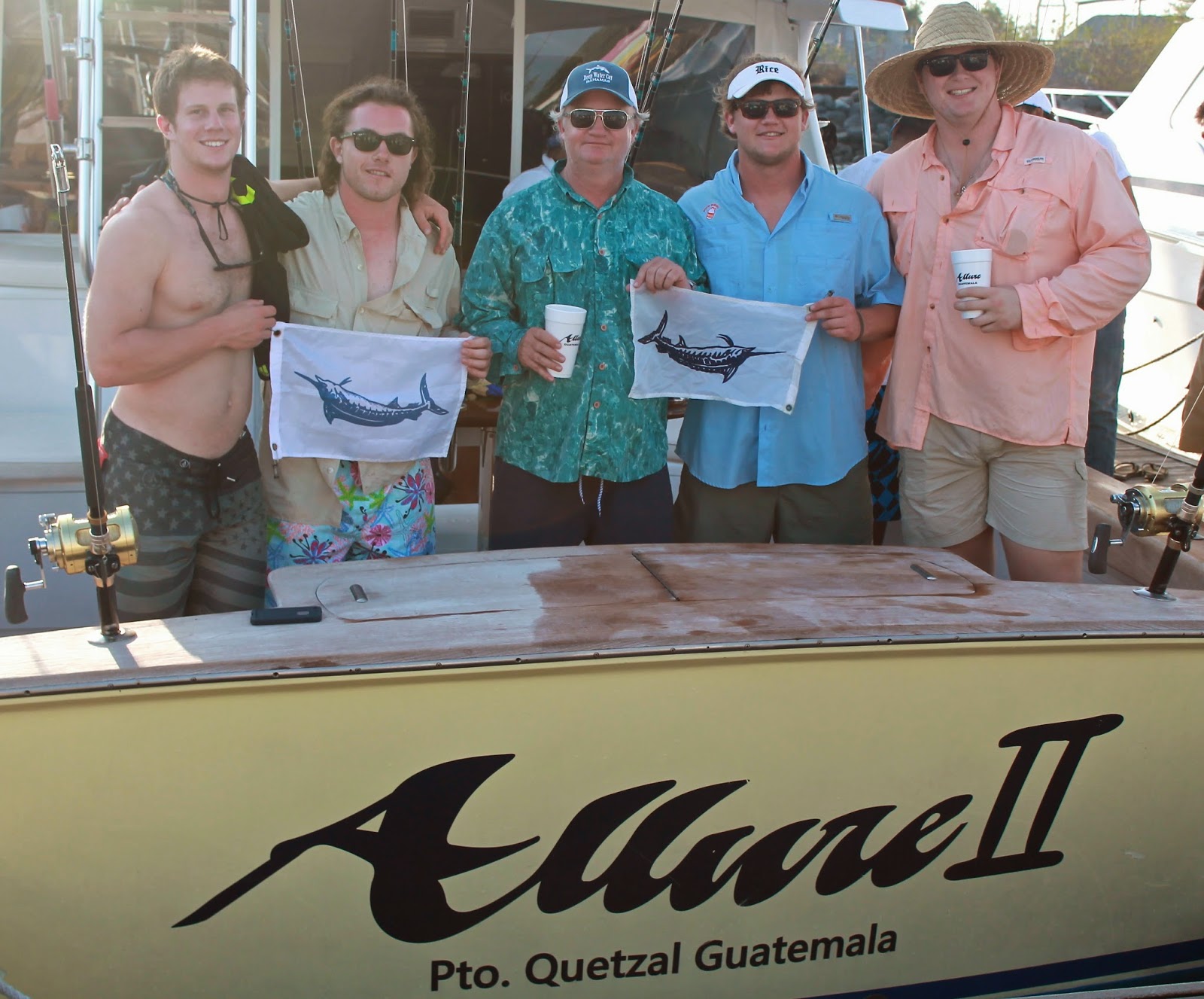 Ethan, Ford, Todd, John David and Sam…
March 1st through 3rd the above group of Rice College football team members had a blow out before spring training begins full on. We gave them a workout here as well with a good bite right here at 9-12NM off the breakwall. First day out we raised 2 blues a feisty one we pitched a ballyhoo on the 30lb test to off the teasers of around 130lb’s, tag and released for Ethan. The other a nice one of more than 300lb that teased in though did not bite. 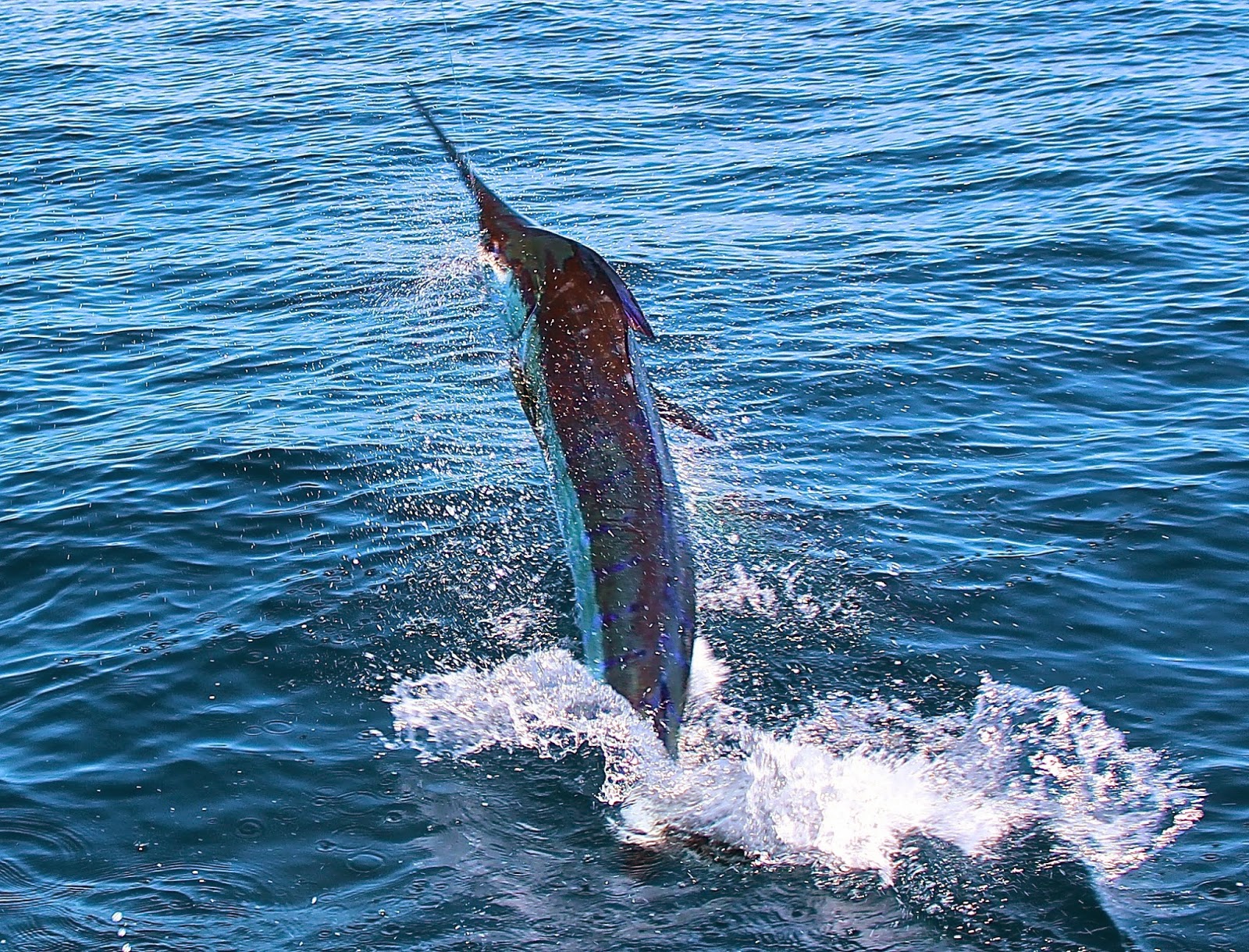 We got into the sails pretty good with 15 from 23 bites as well as a couple of mahi’s for the guys for a great first day on the water. Next morning we had a blue in the teasers as soon as we put them out in the ‘shallow’ water just before the drop at the bottom of the pocket that did not tease in. Soon after we had another one up in the deep water of about 250lb’s that crashed the short teaser and we got an incredible bite on the pitched mackerel from this one. Ethan was up again for his second ever blue tagged and released in as many days!! 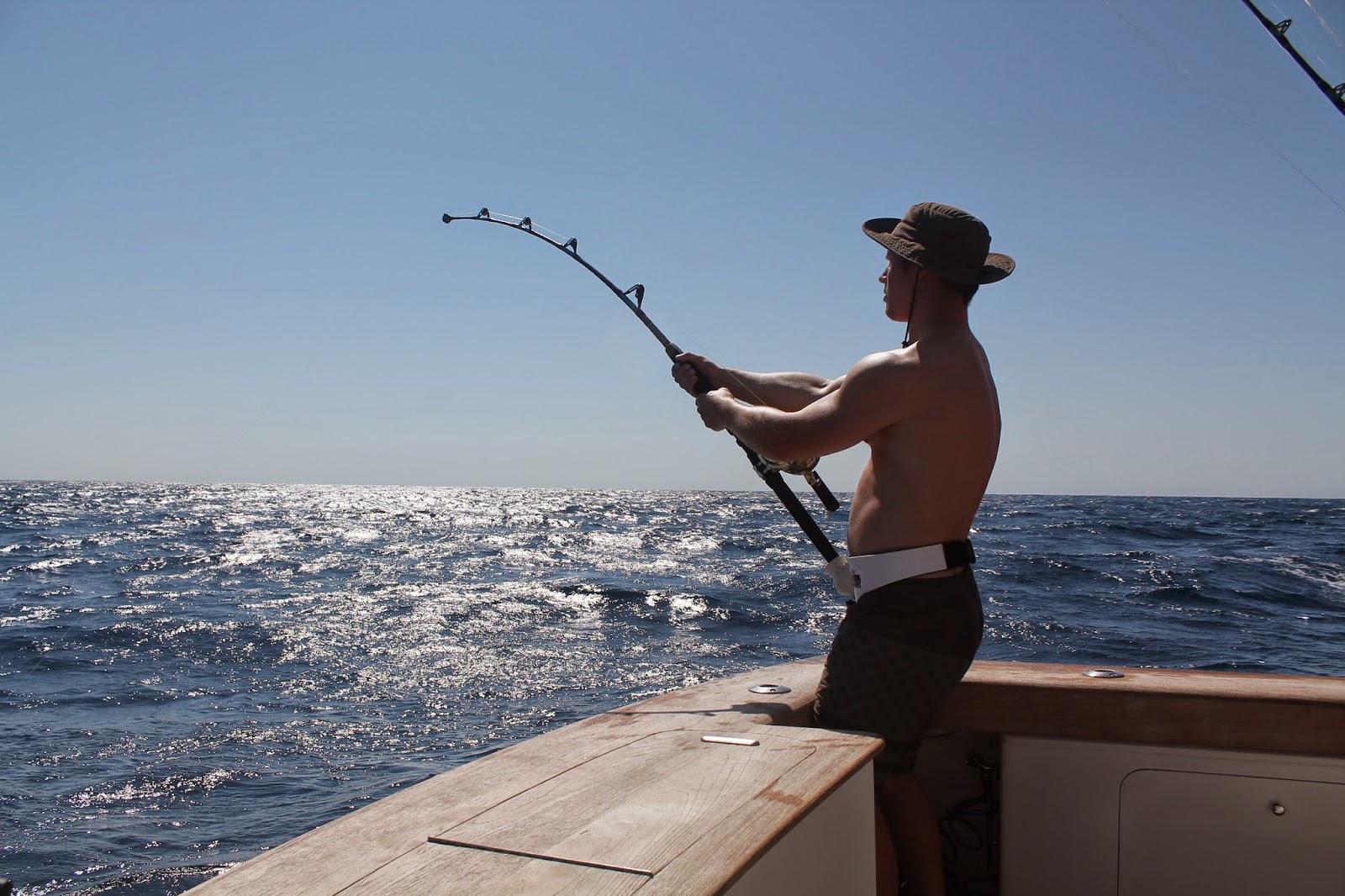 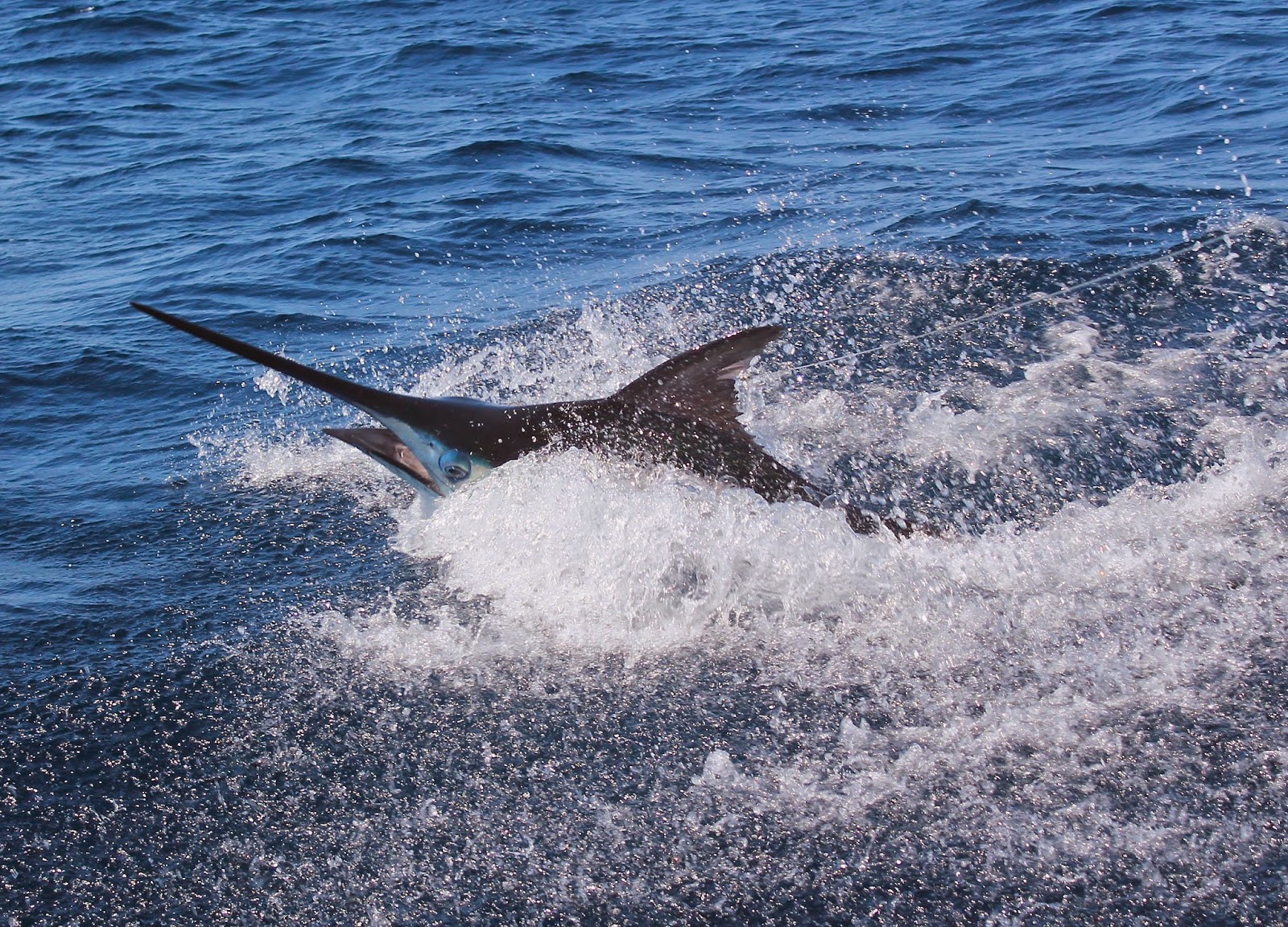 From here on in the fishing was good, and then the afternoon bite went off with triples, quads and doubles in the spread. A baptism of fire for the guys having a go at hooking them themselves, when the dust settled we had raised 52 sails had 46 bites and released 22. Day 3 of the trip the guys finished off their trip fishing on Makaira and on the fly. They were tough to tease in though got a few released and teased in a hot blue that was beaten to the punch….. 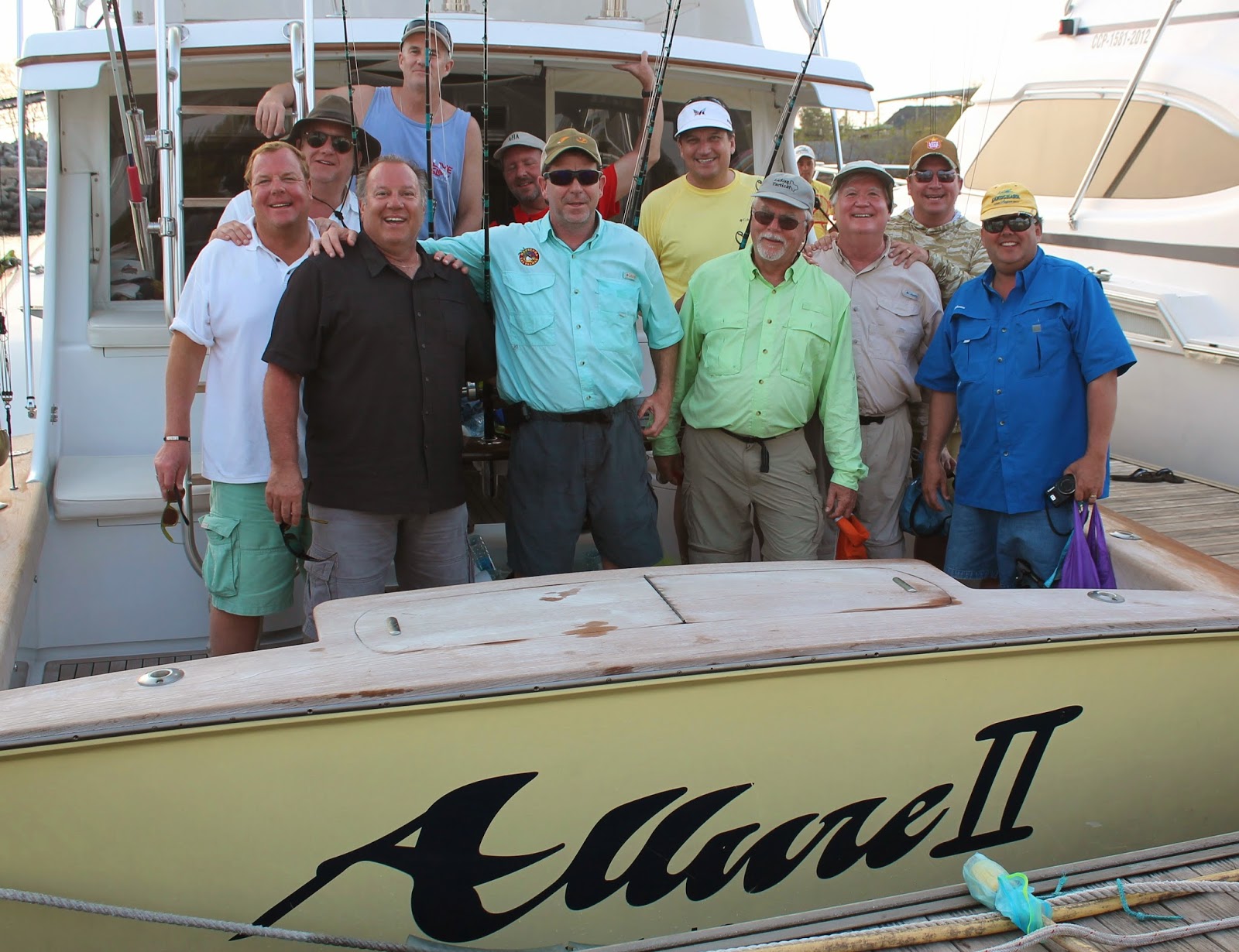 Billy Aud hosted the above group of John Krueger, Kyle Costlow, Matt Perkins, Art Ensley, Sean Castle, Lucien Tujague, Howard Lungar, Kip Snowden, Doug McKnight and brothers Jim and JP Greve.
March 3rd through 5th we hosted the above group for 3 excellent days on the briny. Fishing aboard Allure, Allure II and Capt Hook they released an incredible 181 sailfish and 3 blue marlin!! The fishing for these guys started straight out front at the bottom of the pocket on day one, then moved to the western side of the pocket with the bite ending on day 3 up on the western flats. In the deeper water there were plenty of blue marlin seen by the fleet everyday, though the sailfish were pushed up on to the flats and the fleet followed them. The bite on the last day out there for the guys was pretty bloody good with 81 sails released between the boats….plenty of multiples in the mix and a helluva way to finish their trip!! We had a good time with this crew and they enjoyed their time on the boats, loved the accommodations and staff down at the lodge and of course the fishing went off…..an awesome trip all round for them. They have already re-booked for their trip back here next year so we’re looking forward to seeing them back here!! 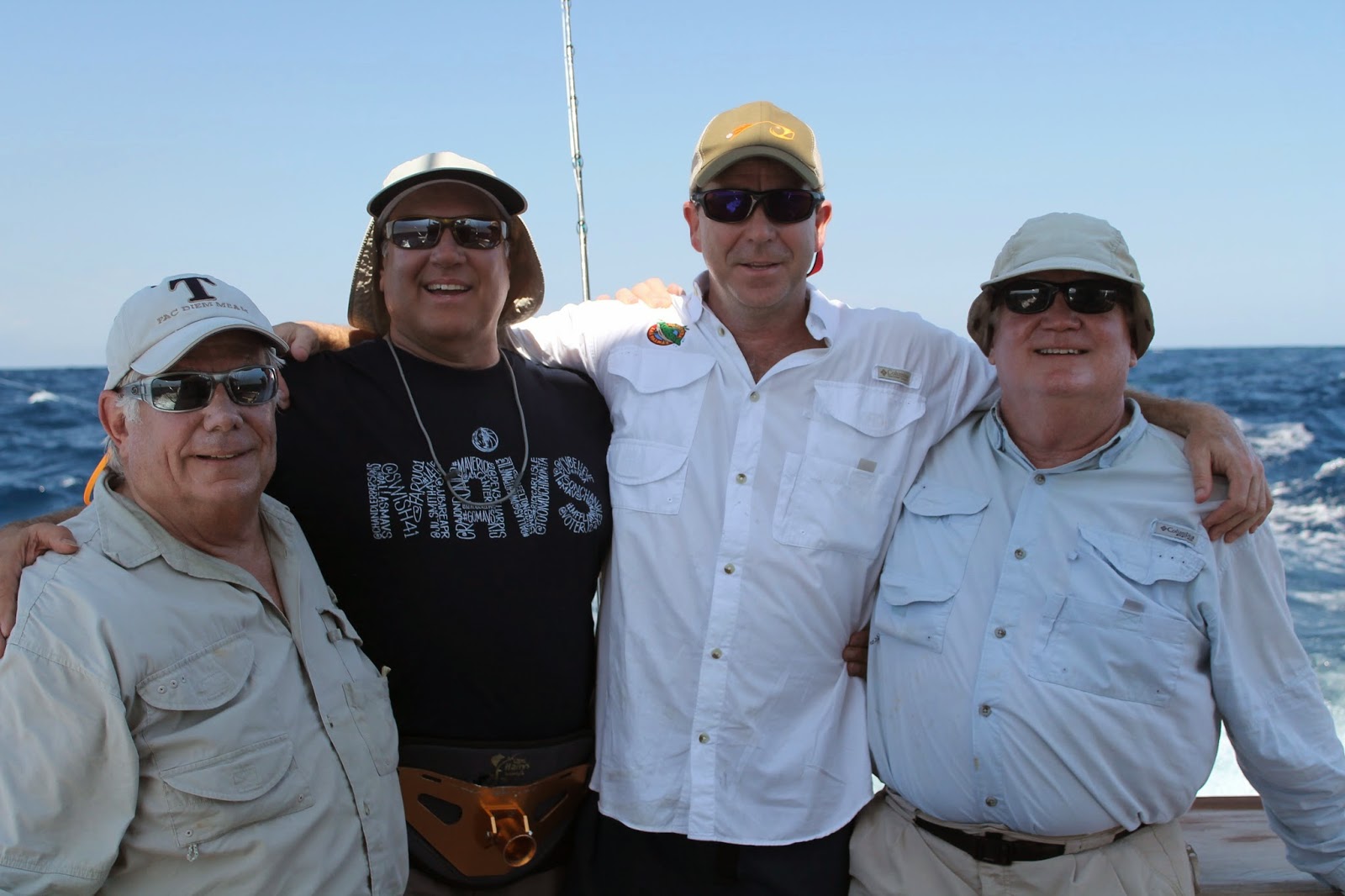 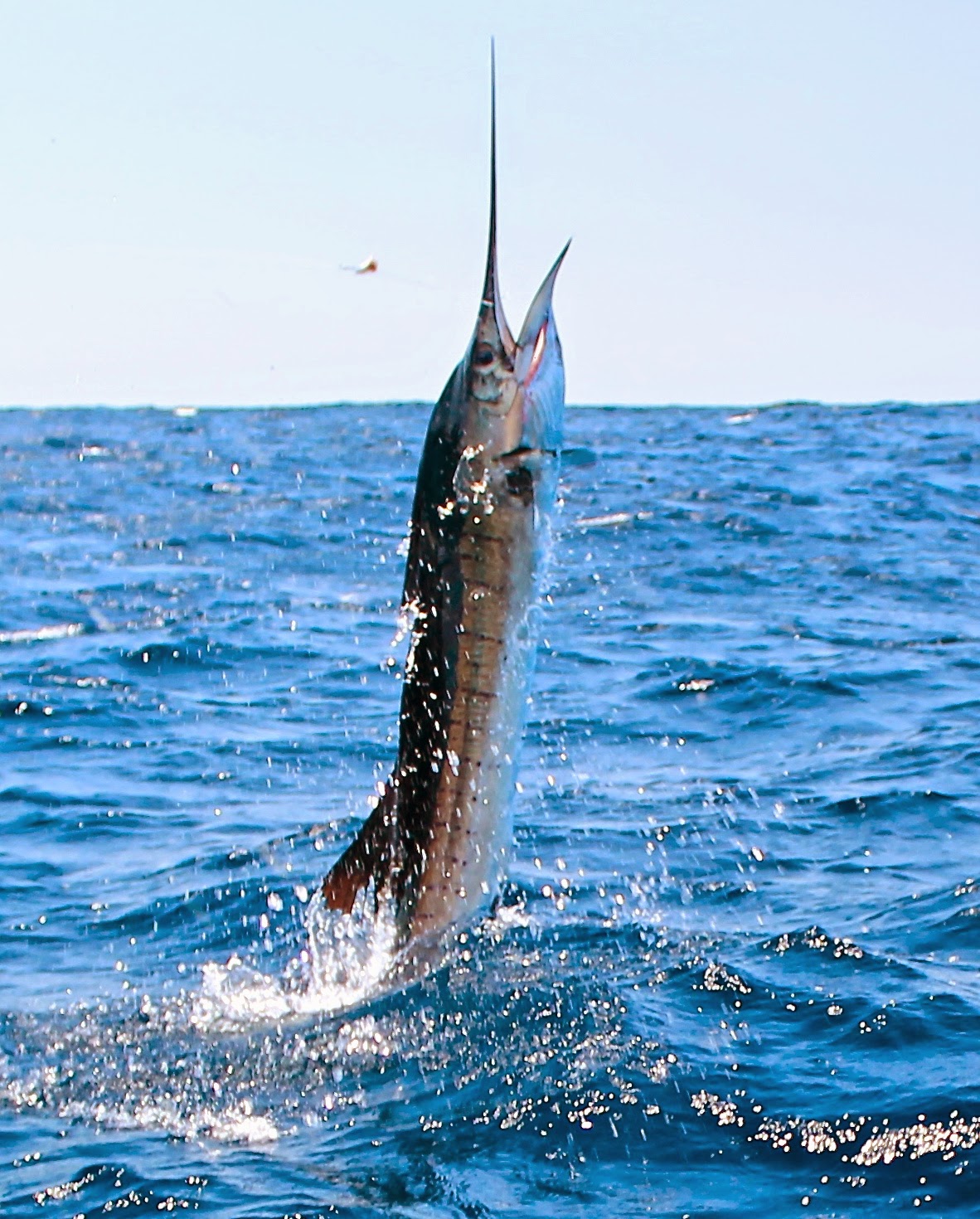 For the last 7 days the guests fishing out of the Oasis to March 5th have released 307 billfish!!! There have mahi’s and tunas in the mix as well.
On ALLURE II over this 7 day period we raised 263 sailfish into the spread of which 239 bit the baits releasing 163 of them along with 3 blue marlin…..
That folks is good fishing.
Come down to get in on it, we are starting to book up May….
Contact:
liz@sailfishoasissportfishing.com