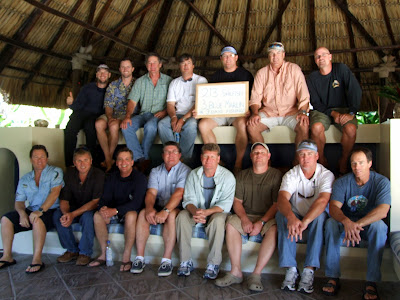 The Collin Ocker organized group of 15 anglers: Chad Walker, Darrel Scanlan, Chris Schadedd, Cody Jordan, Wes Jordan, Ken Culbreth, Mark Thibaut, Clay Morphis, Randy Wendel, Jaine Morphis, John Moyd, Mike Levoi, Mike Griffin, Paul Kennedy and Collin Ocker .
Fishing off 4 boats the group experienced an exceptional bite down here in Guatemala releasing 213 sailfish and 3 blue marlin as well as boating several large mahi’s over Superbowl Weekend February 3rd through 5th. Aboard ALLURE, A-FIN-ITY, RELEASE and SPINDRIFT the guys drew boats daily to mix it up with no set teams, the only rule being no assistance from the mates on the hook-ups. First day out the fleet was spread out in the morning looking for the bite though ended up in the same area in the afternoon with between 9-15 releases amongst the boats. This is Guatemala so there is always something better out there. On ALLURE we went wide out to the western corner looking for an incoming bite, after a long run the move seemed to have paid off with an aggressive teaser bite from an est 250lb blue marlin after just 5mins of lines in. Mark Thibaut did a great job with the pitched mackeral and after a good bite came tight to this fish that put on a show with several long greyhounding runs… 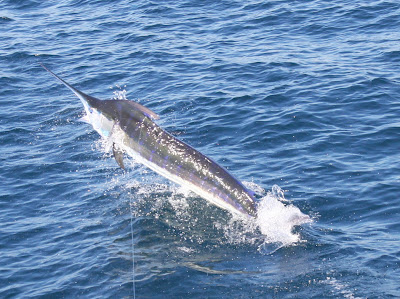 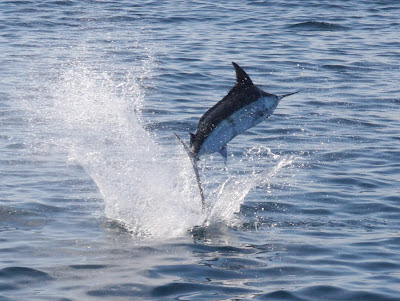 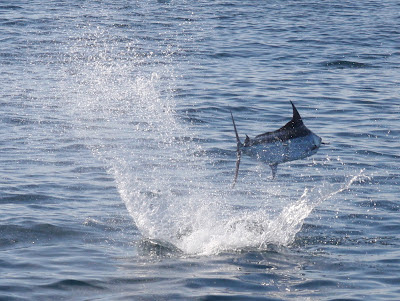 After a 20min fight on the 50lb stand-up gear Mark got the fish boatside for a healthy release. Nearer the edge we raised another blue around a log that came up on a couple of teasers though did not switch to the pitch bait. We did manage to get each of the guys some slammer bull mahi’s though, the log was loaded with small bonitos and some live baiting resulted with a good haul… 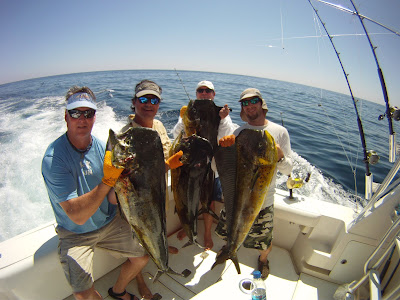 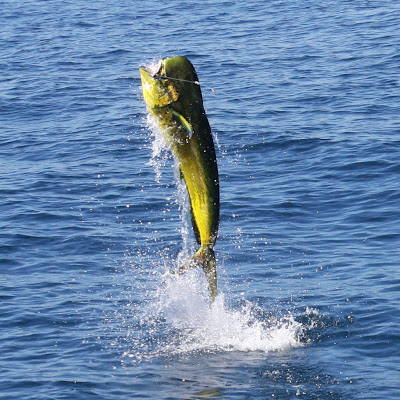 Trolling up the edge another blue in the 400lb class crashed the bridge teaser, we got a great bite on the pitch bait though missed it. Later in the afternoon we raised our 4th blue for the day, this one teased in great and Wes Jordan did the job with an awesome bite just feet from the transom with the pitched mackeral bait. The fish was a tough SOB staying down and dirty for the majority and after 45min on the stand-up gear Wes got it boatside for the release……. 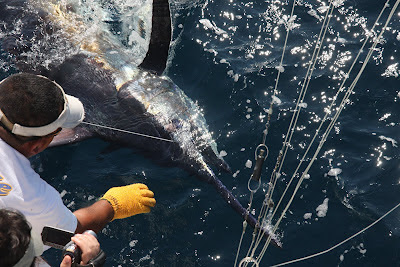 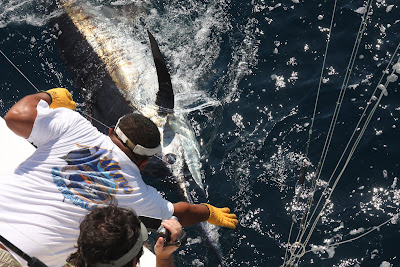 ALLURE mate, Julio about to bill Wes’s est 350lb blue marlin.
Meanwhile 25NM to the east of us early in the afternoon Chip Shafer aboard Old Reliable found a great sailfish bite for the rest of the fleet to get into. They got there early in the afternoon and the bite went off with RELEASE having no sailfish releases by midday finishing up with 23 in just a couple of hours with doubles and triples the norm. A red hot bite for all the boats for the last couple of hours of the day. We all fished there the following day and experienced a great bite with between 51-65 sails raised per boat and up to 30 releases. On ALLURE, Wes had the blue marlin luck once again releasing a tough 250lb+ blue to round off an incredible day on the water for the group with 109 sails released and one blue on their last day out, all on circle hooks ensuring healthy releases. To top it off Superbowl that night was a cracker. A great weekend had by all….!!!

Feb 7th -8th Todd Johnson was back for his second trip to Guatemala this season, this time introducing to Guatemala….
80 SAILFISH RELEASES IN 2 DAYS 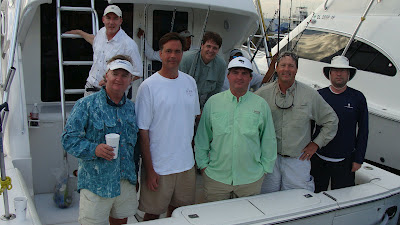 On ladder L-R Greg Binion, Todd Johnson, Brian Tucker, Noble Carl, Mark Hamilton, Marshal Adkins and Preston Marshall.
Fishing aboard ALLURE and A-FIN-ITY the bite stayed good though slowly moving further off-shore to the east. The long runs were worth it though with 80 sailfish released in 2 days between the boats, we also raised a blue marlin that crashed the bridge teaser though disappeared just as quickly. All in all another great couple of days on the water with this group. With the bite seeming to be moving and slowing down it was time to look for something new the next day….

Feb 9th through 11th we wecomed back Team Brazil to the SAILFISH OASIS, 18 anglers and a couple of ‘observers’ all from Rio de Janeiro for 3 days of fishing for their annual Brazilian International Tournament. The format was the same as last year with 6 teams of 3 anglers fishing aboard ALLURE, A-FIN-ITY, CHUBASCON, CIRCLE HOOK, KNOT WORK and PERLA DEL MAR. Fishing to IGFA rules with 20lb line we had:
Team 1, Helio Manques, Lula Bulhoes and Lucas Bulhoes
Team 2, Raphael Coutinno, Guilhermino Lima and Antonino Bitasi
Team 3, Ciba Eduardo, Luiz Pintgirro and Roberto Pitta
Team 4, Elton Vasconcellos, Rodrigo Mattos and Gilberto Malvares
Team 5, Paulo Campos, Pedro Groberio and Guilerme Campos
Team 6, Sandro Lahmann, Joao Lahmann and Renato Barbosa
A true anglers/team tournament was had with all the teams having a fair share of shots amongst the boats, it came down to the better anglers. With the bite off-shore fading the fleet searched inshore and found a pretty reasonable bite inshore to the west, just 12NM from the marina with up to 18 releases per boat. The second day of the tournament took off with boats getting up to 43 bites and releasing up to 25. At the end of day 2 it was wide open with Team 4 of Elton, GG and Tunicao holding on to a slim lead of 35 sailfish releases and 1 marlin. Last years winners Team 6 of Sandro, Joao and Renato released 25 on day 2 to get them from 4th to second with 33 releases overall. 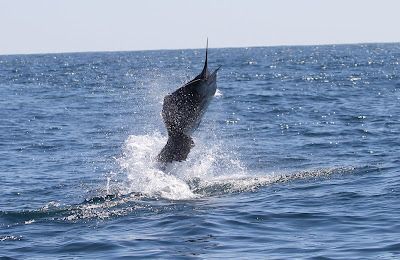 Last day out the bite slowed some though ended up just 8NM from the marina and all the boats raised over 20 sails a piece. Team 6, lead by Sandro had a great day releasing 19 sails to take it out with a total of 52 releases in 3 days. Team 4 with Elton, GG and Tunicao came in a close second with 48 releases and Team 5 with Paulo, Pedro and Guilherme a couple of fish back with 45 releases. Another great tournament and a great time had by Team Brazil!!! We had a alot of fun fishing this group with plenty of laughs and a fair share of sancochos…..El Matador!!

All in all some pretty spectacular fishing and on it goes, marlin are in the mix and of course some big mahi’s as well. We still have a few openings and the fishing is good here right through till the end of August with traditionally more marlin in the mix from later in April on through the summer. Contact us now to experience billfishing at it’s best…….