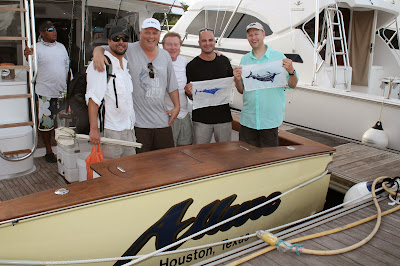 Sept 22nd we fished with our friend Nico Dorion from Guatemala City who is a regular with us, and his international crew of the above. Alston Gardner from North Carolina and Allen Wiekenkamp from Canada have both been down before though it was a first for Thane Stenner and Yusef Zohnny both from Canada as well.
Despite the new ALLURE being here since late July this was our first fishing day on her here in Guatemala. The guys were impressed with the open, comfortable lay-out, though better then all of that she fished well and we had a great day out there. With reports of green water to the west we went about 32NM to the east and got into a couple of sailfish bites early on and raised a blue marlin that didn’t stick around too long. From there on we had fairly steady sailfish action as well as this double header for Nico and Alston… 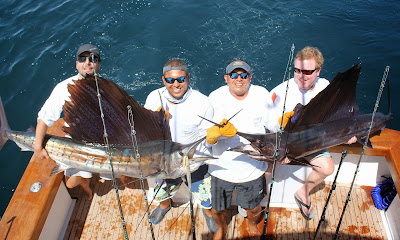 This was followed shortly after with Yusef hooking into his first ever blue marlin, the fish came in hot on the short teaser and switched to the pitched mackerel with an aggressive bite right at the transom. A tough feisty fish pushing 200lb it gave him a real work out on the 50lb stand-up gear though he did a great job on the rod getting it boat side for the release. 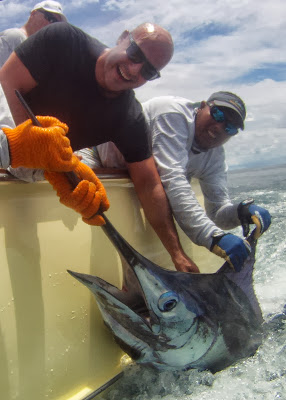 A double header of mahi’s right on lunch hour made for some great fish taco’s and soon after Nico got locked into a nice blue of about 300lb’s, another very aggressive teaser fish made for an exciting bite and it seemed well hooked, the fish jumped several times and we got near the release when the hook pulled about 10min into the fight. Disappointing. With a few more sailfish releases we were winding down our day when another blue tore into the spread crashing the 2 short teasers. It then moved to the long teaser and came in fast, this was the hottest fish of the day and the crew did a great job clearing the teasers getting the pitch bait back in time and what a spectacular bite…..Allen was up next and into this fish, his first blue marlin, another tough one staying down and dirty for the majority of the fight he did well. 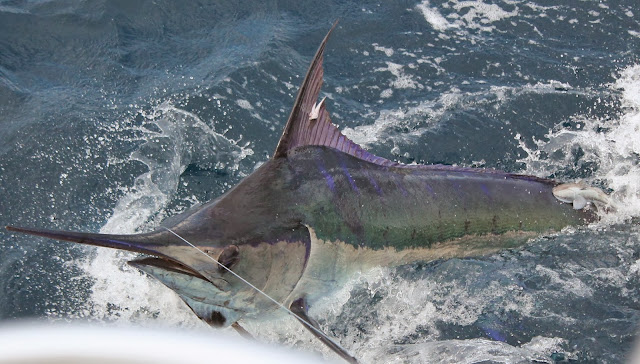 A solid 250lb blue for Allen topped off a great day on the water, and what a first day out for the new ALLURE. 4 blue marlin raised, releasing 2 from 3 bites, 14 sailfish up in the spread with 9 releases from 12 bites and a couple of mahi’s. We had a good time with Nico and crew and hope to see you guys back down here soon.
The boat is sweet, definitely THE boat to fish on down here in Guatemala. Get in touch now, the fishing is good and I think it is going to get better. We have availability in October, November and December with some very good deals.