GUATEMALA IS GOING OFF!!!

This was the first time in years that we did not fish between the 27th and 29th of December and were we regretting it!!!! The bite down here in Guatemala was going off, it started on the 26th then a big body of fish moved into the bottom of the pocket just 10-20NM off-shore and from there on in boats had anywhere up to 114 bites on the baits. Hearing about the bite ALLURE co-owner Hill Dishman changed his flight to arrive a day earlier and fish from the 30th on. 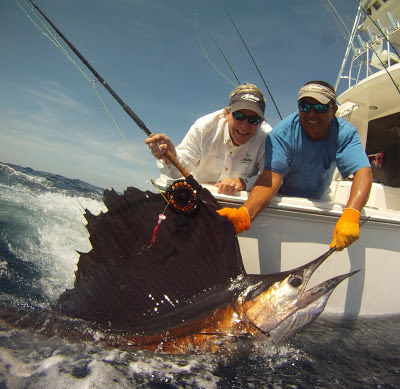 Hill with a nice sail about to be released on the fly
We fished the fly all day and by 0945 we had released 5 from 5 bites, it was looking like a big day ahead. From there on in the sails were not as aggressive, we raised a bunch though teasing them in proved a task, we still had a great day on the water with Hill releasing 9 from 9 bites, 8 of these fish were on the same fly, the mates missed a couple of fish when the doubles came in on the fly. We raised 26 for the day and the guys fishing then baits saw the better of it.
On the 31st Hill’s son Drake joined us so we put out a ballyhoo with a circle hook on the rigger behind the long teaser with the idea of getting a few on the bait while concentrating on the fly again. Drake got into a nice one early…. 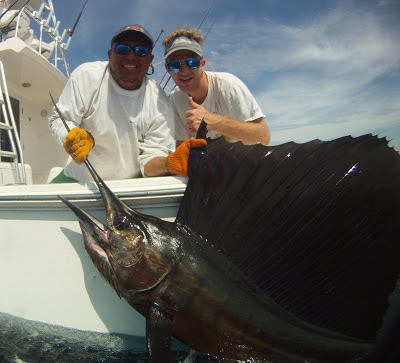 Drake with the first sail of the day, a big girl, just 5NM of the beach
From there we aimed for the 100 fathom drop just 8-9NM off the beach and just over the drop off there she came. A big fish that we raised on that small ballyhoo behind the teasers, quick action had the mackerel pitched and despite the big fish eating the ballyhoo (and thankfully we missed it on the light stuff) we still got a great bite on the mackerel. Hill came tight and Drake took over. She was a big one at 600 odd pounds and as tough as they come, she came up jumping on 4 separate occasions and for the rest stayed down and fought hard despite pulling angles on her, this photo was taken from a way off, she was a fat one!!! 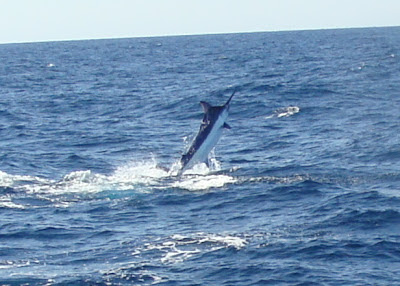 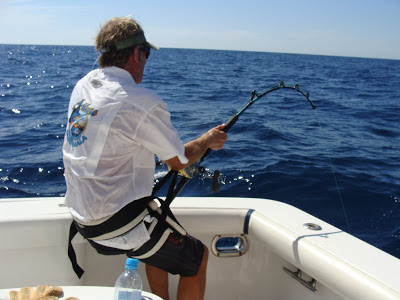 A little under gunned on the 50lb…after pulling angles getting parallel trying to plane her up
Drake got the release on her, though we spent three and a half hours on the stand-up!! This fish topped off a pretty good year for us with 18 blue marlin releases in the calendar year, one black and one stripey.
We finally got back to fishing after lunch and raised 30 sails for the rest of the day, on that one ballyhoo behind the teasers we released 13 from 19 bites and also released 3 from 6 bites on the fly in a short afternoon.
That night we had a big night seeing off 2012 at the OASIS with the Blue Dawgs providing live entertainment and a huge firework display at midnight.
On the 1st we had a late start and got into some fish late in the day with Donelle, Hill and Drake Dishman. We raised over 20 and a big marlin that left a huge hole behind the long rigger teaser though we never saw it again. We ended up with 4 on the fly and 5 on the bait in a short day, as well as Drakes first sailfish on the fly…. 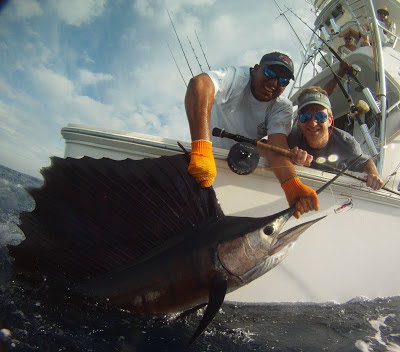 Drakes first on the fly with Capt Hill 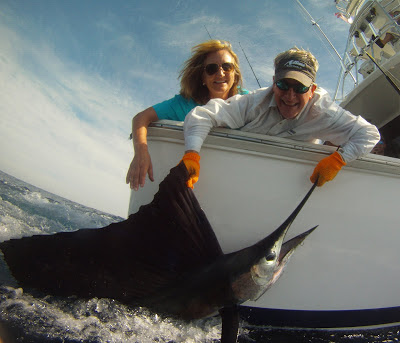 Donelle’s first sail for 2013
2nd through 3rd we welcomed the Lombardo family for a couple of days of conventional fishing, we started near we finished the day before and got into the fish fairly early. Fishing conventional we were into them pretty good, the afternoon proved hot with very consistent action. Despite leaving the dock at 0830 and returning early we still raised 62 sails and released 45 from 58 bites. What an introduction to sailfishing in Guatemala for the Lombardo’s!!! 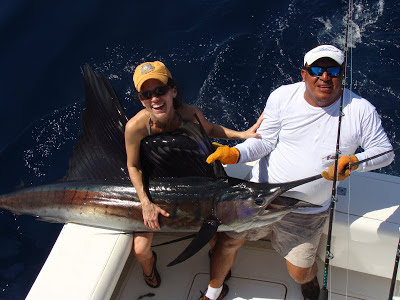 Sally Lombardo with a big sail
With the family beat we fished just dad, Randy Lombardo and son Nathanial for a short day before they headed up to Antigua, in just a couple of hours of fishing we raised 18, had 14 bites and released 8. Still very good fishing out there with some big sails in the mix. Things are looking good and we out every day for a while now so looking forward to more great fishing here in Guatemala!!! 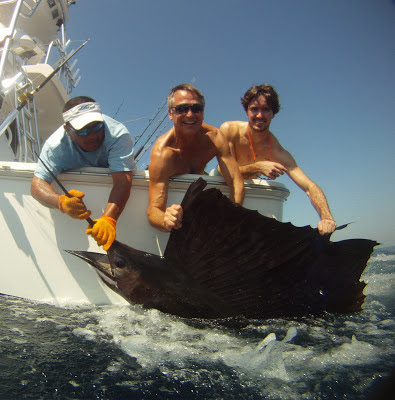 Father and son enjoying a great day on the water

Still some openings! Come down and enjoy the best billfishing in the world…… 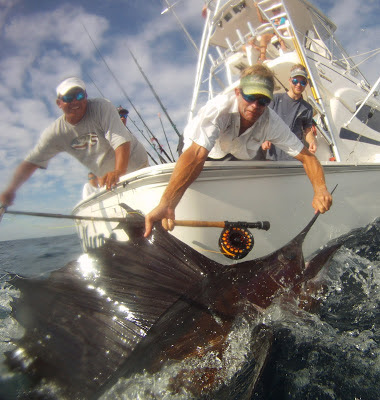 Nice sail on the fly, some big females out there normally with a few males hanging around…..