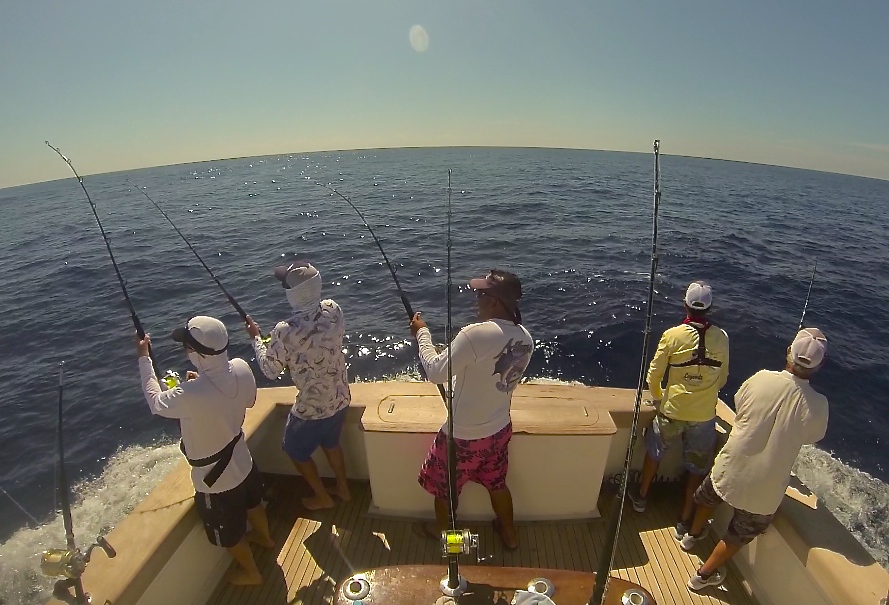 Hill Dishman, Kevin Deerman, Jim and Cameron Plaag on a quad…
December 27-28-29 we welcomed the Hill Dishman hosted group of Kevin Deerman and Cameron Plaag from Legacy Fishing Team and Silver King Adventures guide Jim Plaag for 3 days of nothing short of brilliant fishing. The guys timed their trip well and we got into ’em good with plenty of singles, doubles, triples a few quads and even a quintuplet release! 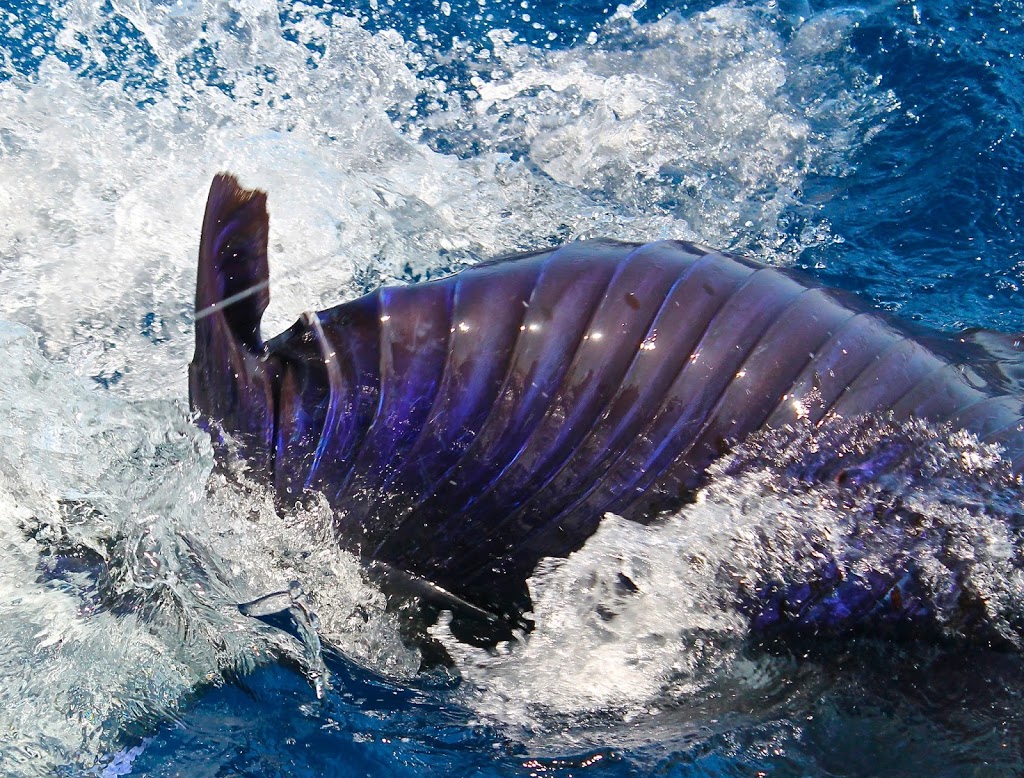 The birds were working bait and the fish were snapping with totals of 27 from 43 bites, 38 from 57, and 21 from 30 as well as boating a mahi every day for fresh mahi taco lunches. 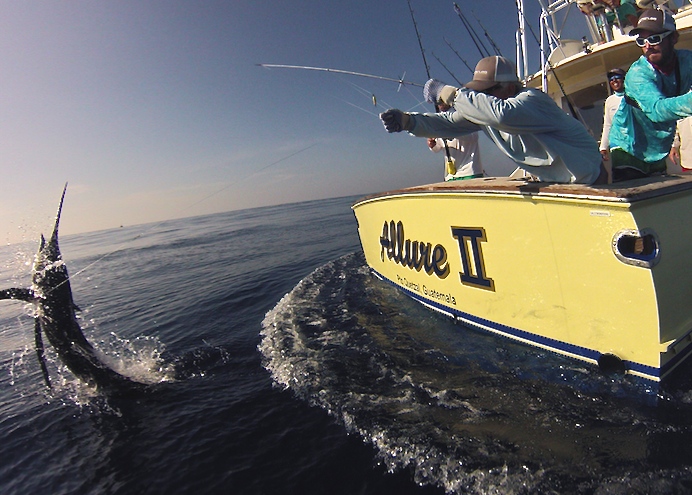 Jim on the leader 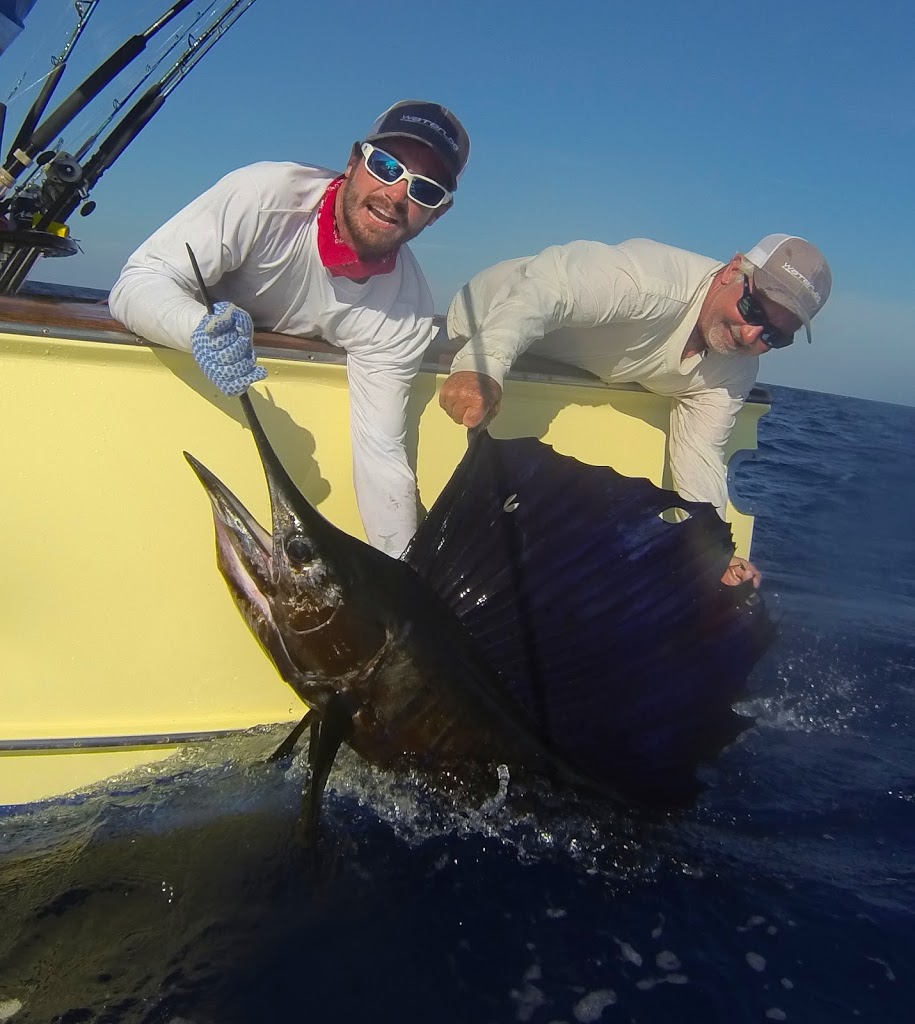 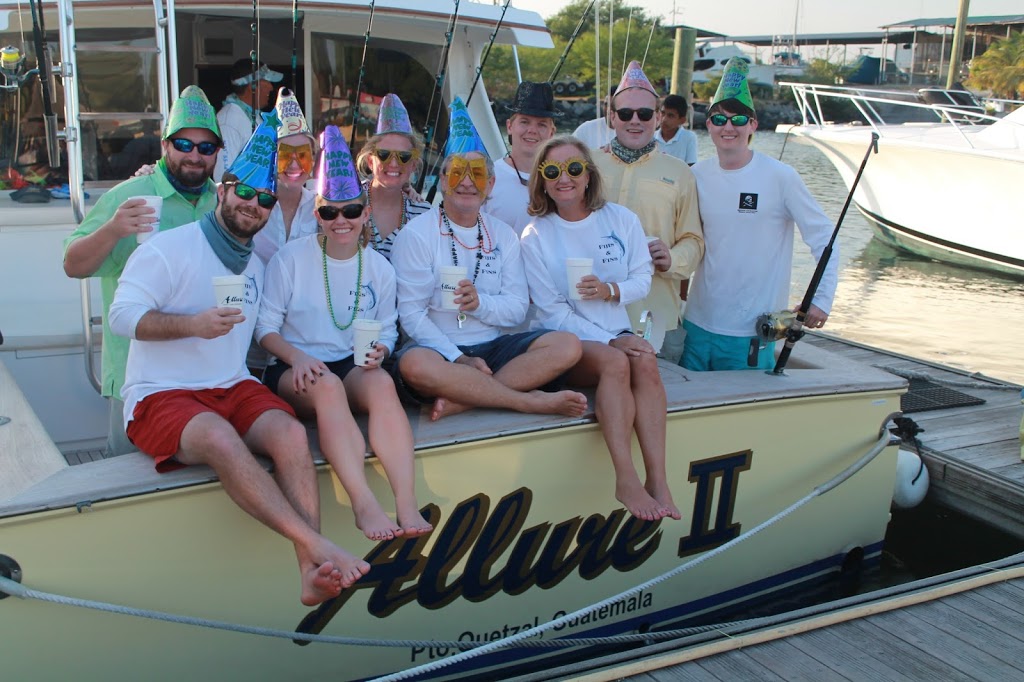 Brett & Stephanie Dishman, Jeff & Jenna Bissell, Claiborne & Courtney Morris, Doug & Sarah Centeno, Chas & Caroline Duvall with Hill & Donelle Dishman
Between Dec 30th and Jan 2nd over 3 days of fishing (we took Jan the 1st off to nurse hangovers) the above crew fishing on both Allure II and one day on Capt Hook, Team Alabama got into some good fishing. As well as releasing 33 sails there were also 3 blue marlin raised and we missed one that did bite. Back at the Lodge we had a huge New Years party after watching Alabama crush Michigan State with several Antigua local families in attendance and of course the Blue Dawgs playing till the wee hours…..Good times!! 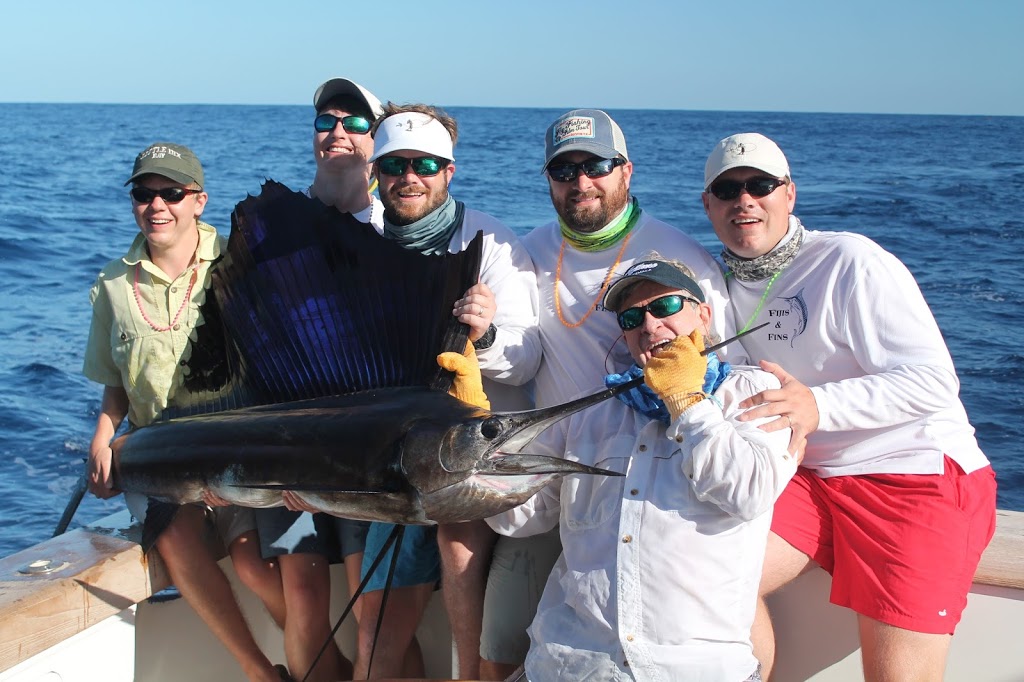 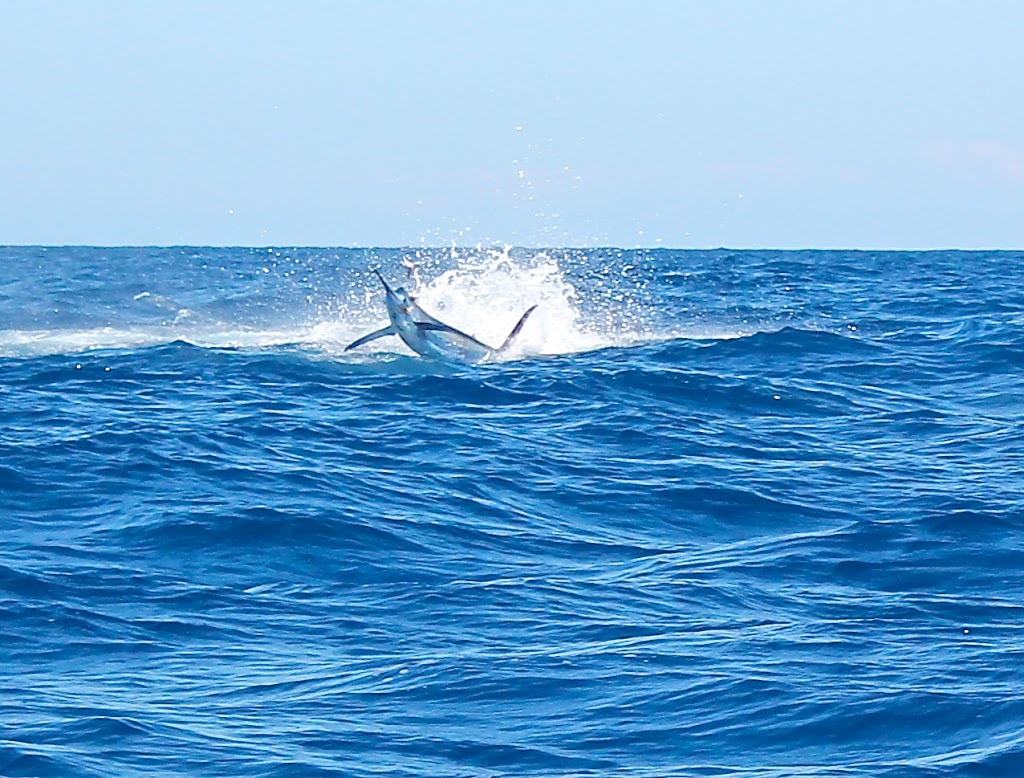 January 3rd and 5th Hill was back out there for the 2 days while resting up on the 4th. We spent some time out there looking and found some fish on the eastern edge at the end of the day on the 3rd. Mixing it up on the fly and bait we ended up with 11 on conventional and 2 from 2 bites on the fly. On the 5th the fish were not as thick though we went 1 from 2 on blue marlin and mixed it up on bait and fly again releasing 8 for the day from the 16 raised…. 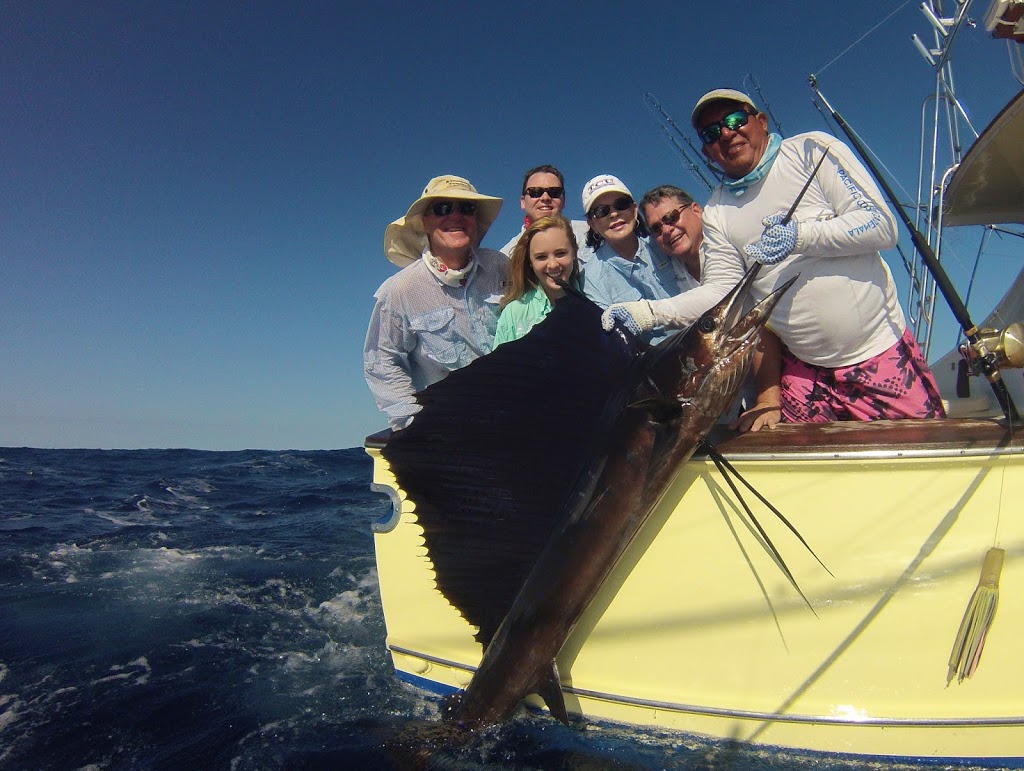 L-R, Jim, Katie, Chris and Clare Anderson and John Carlson
January 6-7-8 for their first trip to Guatemala we welcomed the Anderson family along with good friend John Carlson from Corpus Christi for 3 days aboard ALLURE II. With the fishing a little slow to the east the previous day we went looking to the western edge and found some good action there for the 2nd half of the day. 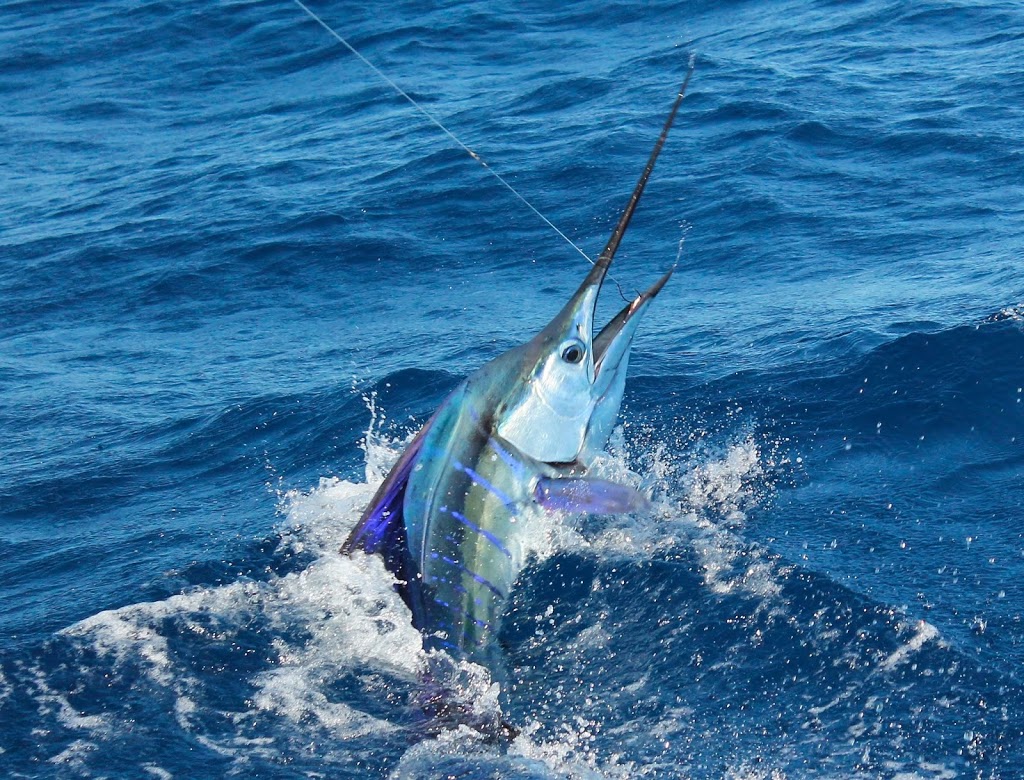 We fished this area for the next 2 days and experienced an excellent bite with 58 sails released as well as Jim hooking into a large solid 400lb blue marlin which took an hour and 40 mins on the 50lb stand-up gear before we could get the tag in. For the last 15mins we had 30lbs of drag on the reel to get this large fish up! 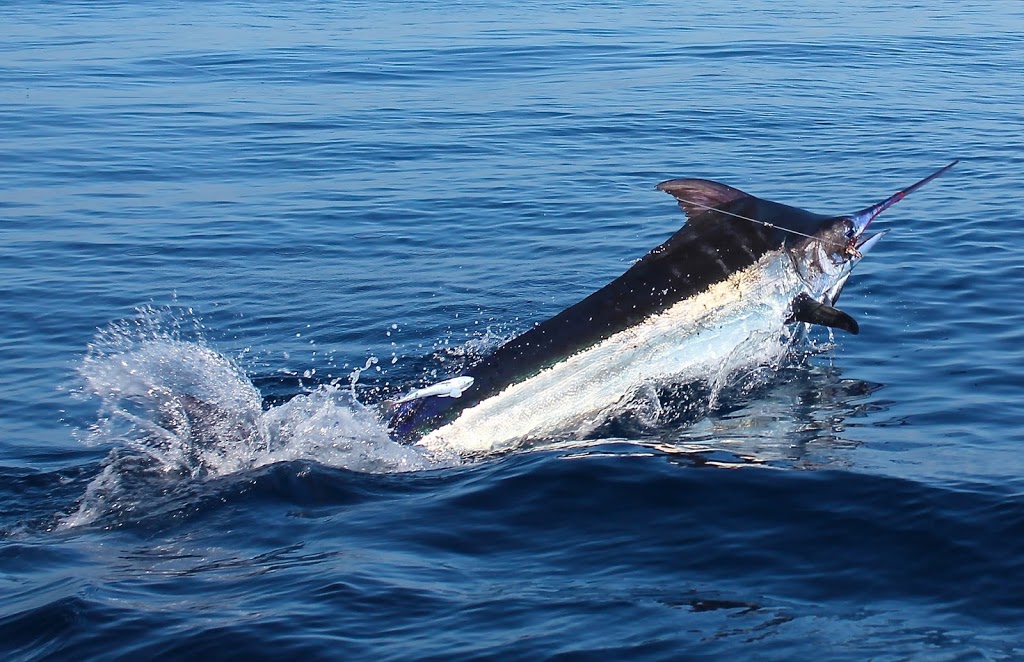 We also had a stripey in the spread that we missed and a large fish on the rigger bait that we missed as well. Good fishing and great times with this crew!!
‘Everything was fabulous! Food-Fun-Fishing. What a beautiful place. We will be back for sure!!’
The Anderson’s Jan 9th ’16 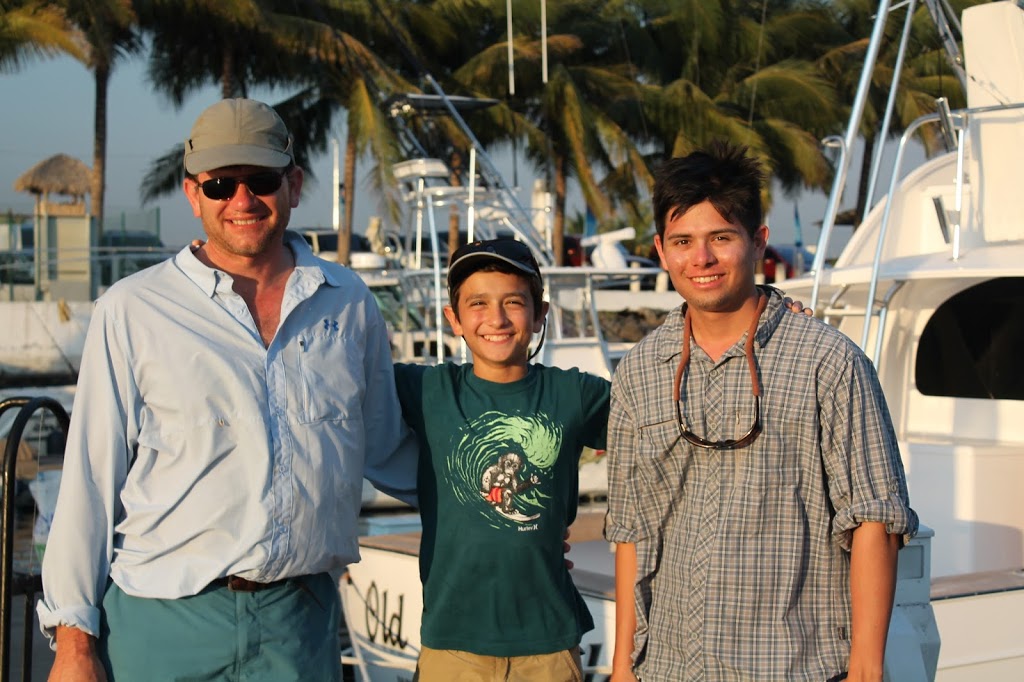 Charles Carmeci with sons Finn and Tristan.
January 6-7-8, we hosted, for another first trip to Guatemala, the above family from Oregon down to the ‘Oasis’ fishing aboard MAKINA for 3 days. They mixed it up fishing both conventional and changed to the fly late in the 2nd day for outstanding results with 33 releases on the conventional tackle and 11 released on the fly!! 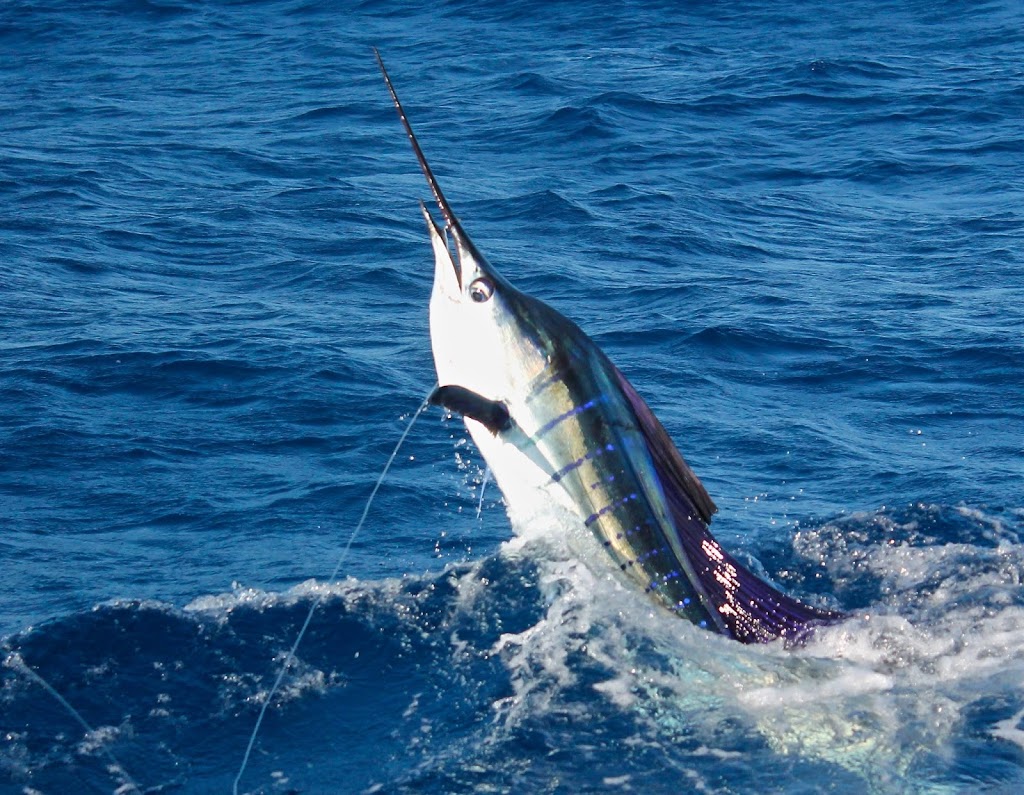 Some awesome bites right off the transom as well as a stripey released on day 2 and a large blue on day 3 for Tristan on the 50lb stand-up. 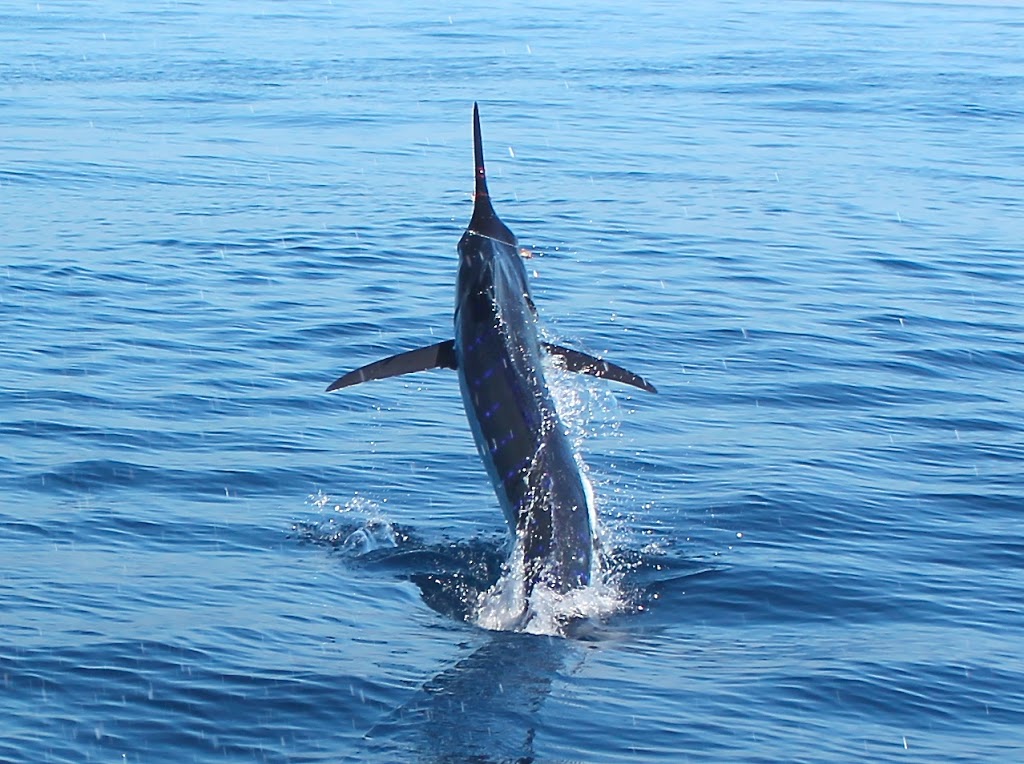 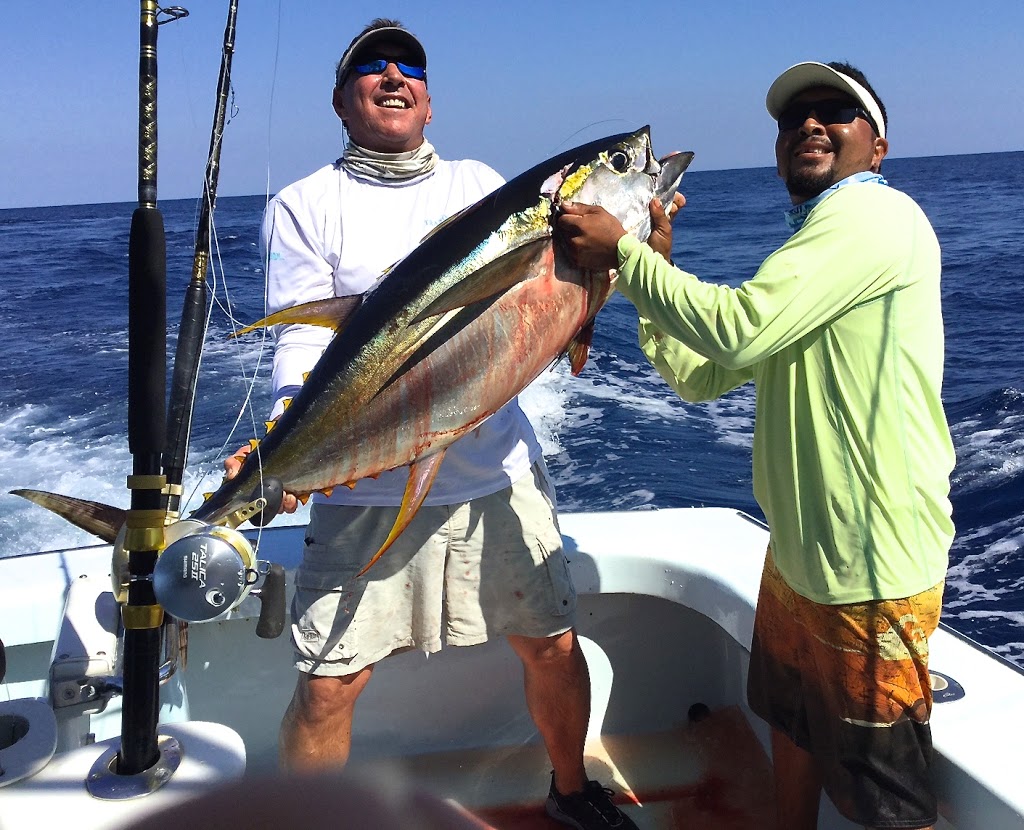 Scott Kozak with a nice 80lb+ tuna
January 7-8-9 we hosted down at the Lodge once a month regulars Scott Kozak, J Godwin and Bill Easum fishing aboard CAPTAIN HOOK. These guys are pros and miss very few fish with a 3 day total of 50 sailfish released from 61 bites!!! That there are some impressive numbers, Bill Easum also released a 250lb blue marlin and Scott boated a nice tuna in the 85lb range. 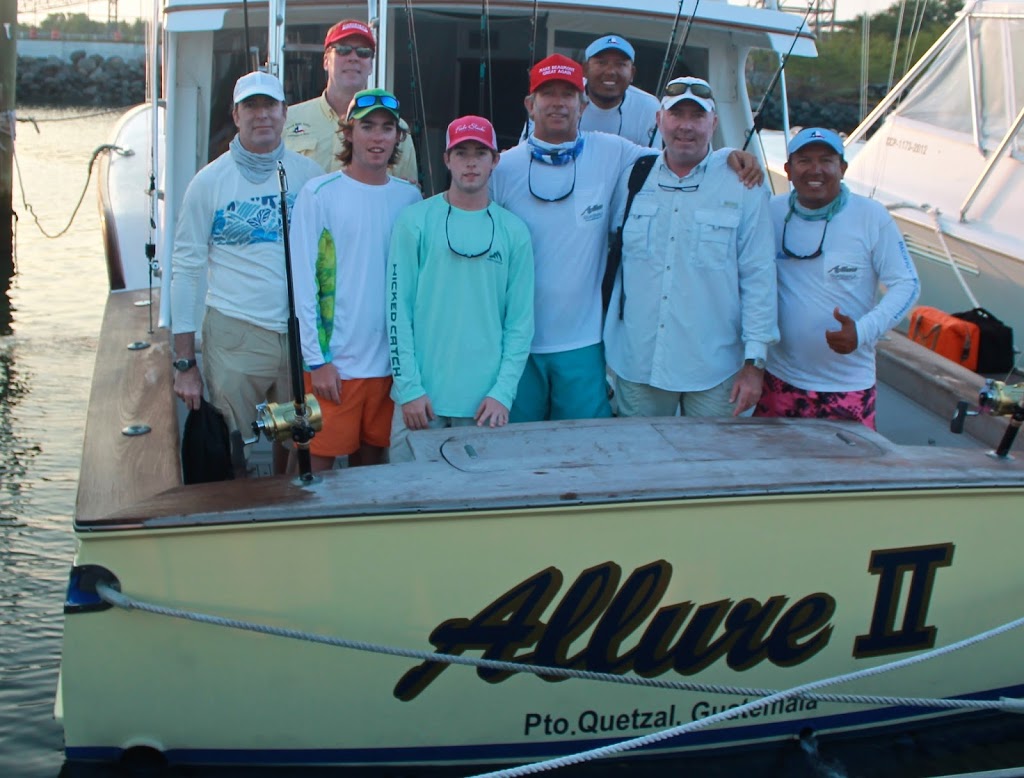 David Lynch, Chris Bean, Owen, Sam and Brad Lynch
January 9-10 we welcomed back Chris ‘Make Beaumont Great Again’ Bean aka Sñr Frijole with good friend Brad Lynch. This time Brad brought along twin sons Owen and Sam along with brother David. The crew dived in the deep end hooking all their own fish from the get go. It really is the only way to learn and the boys were at it like pros despite the inevitable ‘sancocho’ that comes with learning. They ended up with 27 releases from 46 bites and a couple of nice big mahi’s to boot over their 2 days on the water. 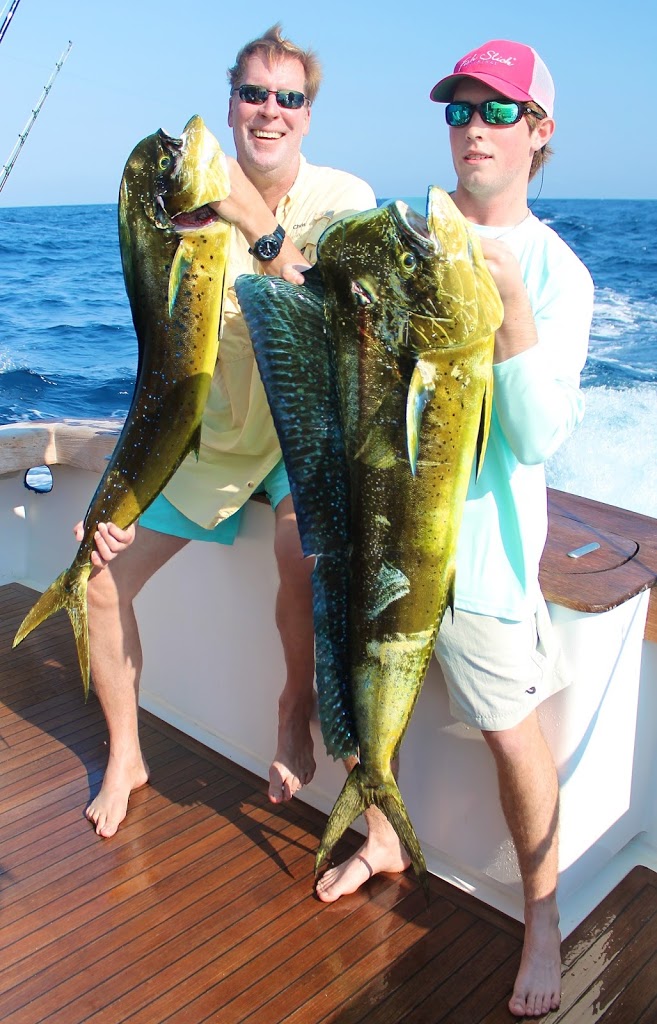 Chris and Sam with a nice pair… 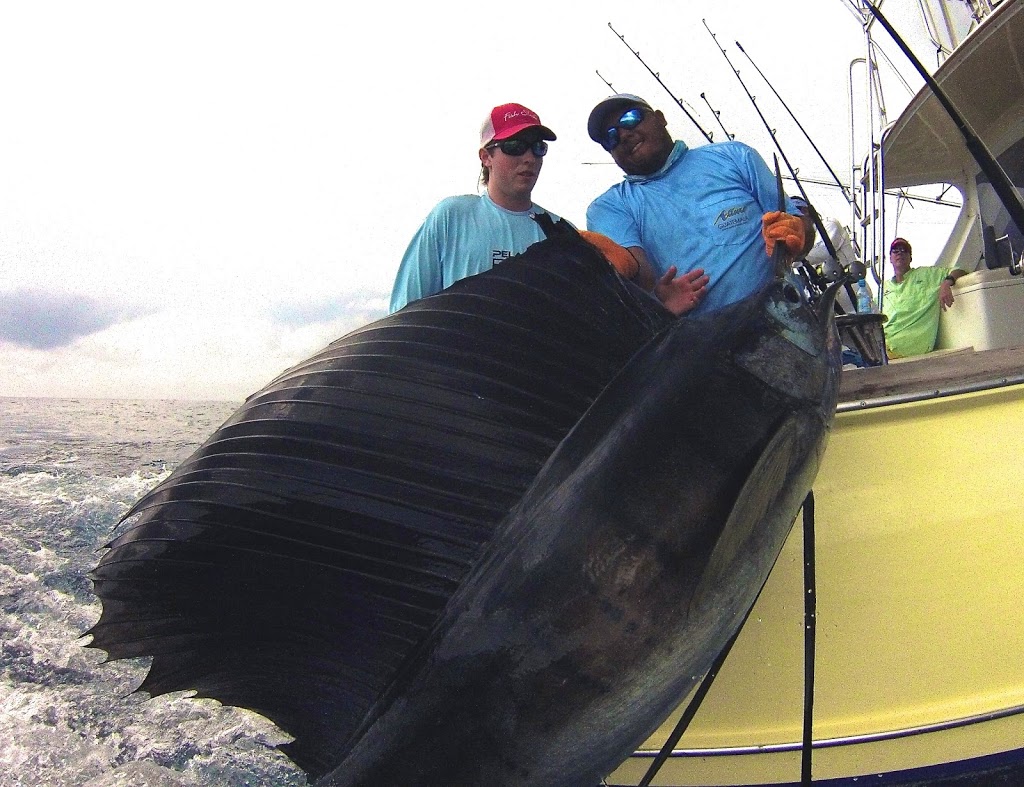 As well as getting the release on this horse!!! 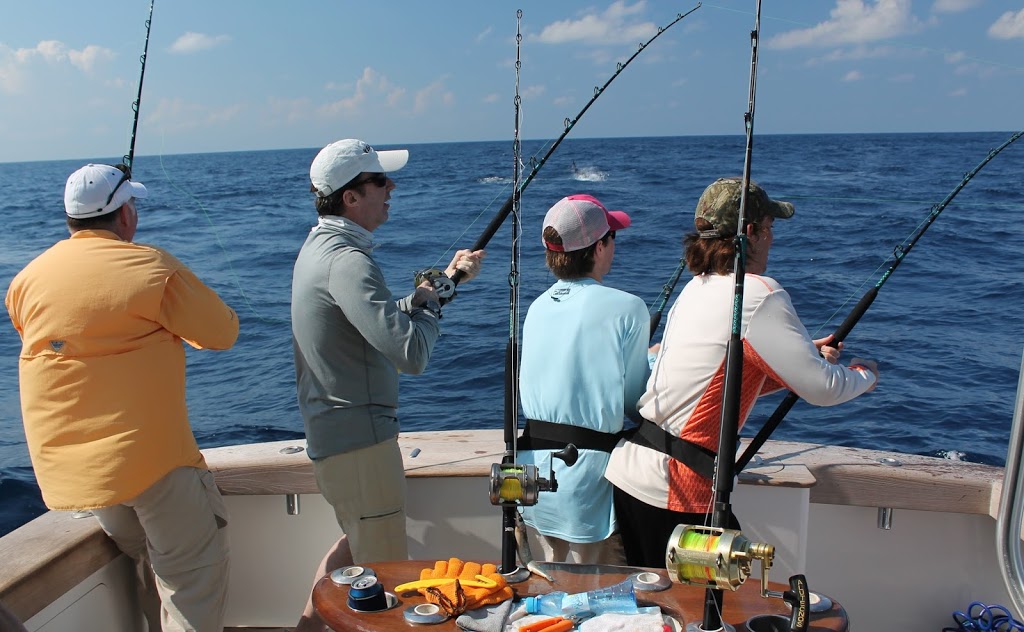 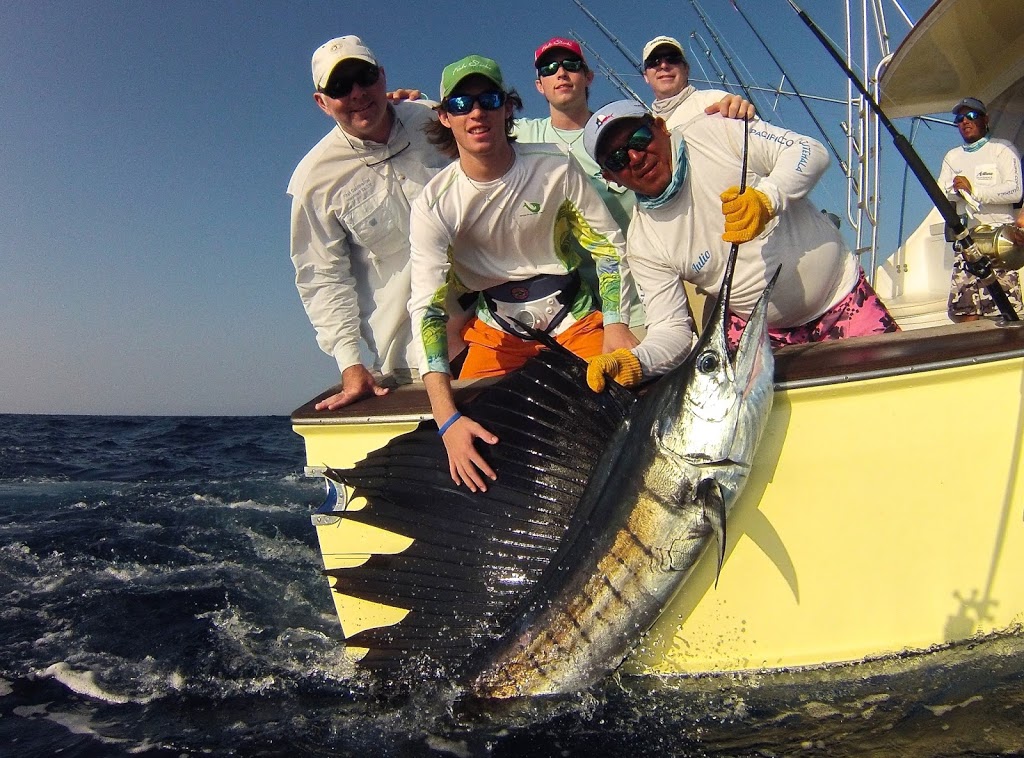 We fished the middle of the pocket the last day out raising a nice blue that stayed behind the boat forever though did not commit to the pitched mackerel. The averages went up and it was good to see Owen and Sam picking up the circle hook techniques and fishing real well. Good stuff and we hope to see this crew back down here soon.
The good fishing continues!! We started today with the Jeff Quick group here at the bottom western corner of the pocket just 12nm off the break wall and ended the day with 34 releases from 57 bites as well as a large 400lb++ blue marlin that gave us a head and shoulders turning bite on the mackerel…..what a sight!! The hook didn’t find the corner of the jaw unfortunately…..There were several more seen amongst the fleet and the sailfish were biting consistently right through the day. The fishing is GOOD!! We have February 12 and 13 open which is a Friday and Saturday, a great opportunity to get down and get into this fishing over a weekend. Get in touch to secure these dates, they won’t last….