We fished both boats this last weekend with ALLURE I having a last minute booking with team Casa Vieja Lodge in the PCCA fished Friday through Sunday. Team CVL consisting of David Salazar, Jim Turner and Albert Castro enjoyed some good fishing with Capt Julio Morales on ALLURE I. At the end of day 2 they were well on-line for a shot at the title in 3rd spot overall with 32 releases. Day 3 proved to be one of those days out there where some of the boats had the hum, and others didn’t. Top boat Intensity had a 12 fish lead going into the last day though couldn’t get it going and missed out by one fish to travelling boat Tranquilo, Intensity came in 2nd with Capt Hook 3rd, all one fish apart closely followed by Team CVL and ALLURE I. Though they missed out the guys in Team CVL had a blast out there and were raving about the boat, Capt and crew. 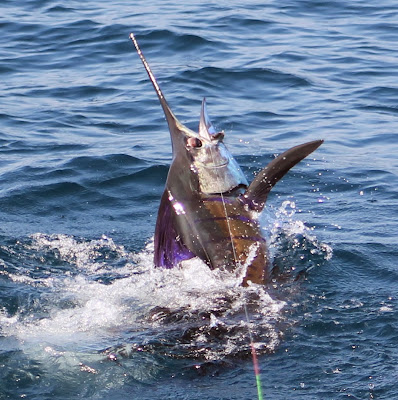 On ALLURE II we welcomed back good friends and regulars down here to Guatemala Capt Mick Childs from Hawaii and (Jimmy) James Cambridge residing in Flamingo, Costa Rica. With other commitments they chose not to fish the PCCA this time around concentrating on ‘fun’ fishing instead….and fun they had. Friends from way back, they had a great time on the water and back at the lodge keeping Nick on his toes and busy behind the bar….
To the fishing, first day out, Thursday 21st we worked our way out to the middle of the pocket about 25NM out finding nice water and at about mid-morning a big pod of spinner dolphin with birds and tunas busting. A request for sashimi resulted in 11 tunas boated, enough for the bin so we moved on looking for the bills after having a blast catching those… 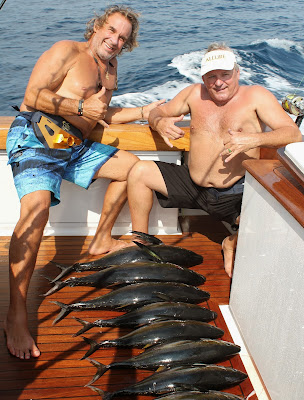 Jimmy and Mick with lunch and dinner.
Looking to the east and off-shore proved fruitless so we ran back to the west to the middle of the pocket and found some sails biting there. The guys got into their grove early on and missed few fish, most of the action coming in the last 2 hours of the day they released 11 from 17 bites and missed a 200lb blue that came in hot. Nice day out there! 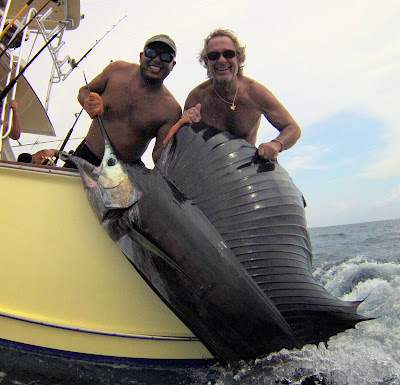 James Cambridge with a beauty before release.
Friday the guys headed to Guatemala City and Antigua for a break and some business. Back out on the water the following day, Saturday proved a bit of an ask after a big night down at the Lodge with manager Nick…..A few too many tequilas and rums meant a late start for the guys though we made it out to the fleet by about 10.00am and were into the fish soon after. The action stayed steady out there, a few more sancocho’s today, though, not all of them attributed to Nick, just some plane bad luck as well. 14 sails from 23 bites and 5 yellowfin tunas, not bad at all seeing we pulled up lines and came in early as well… 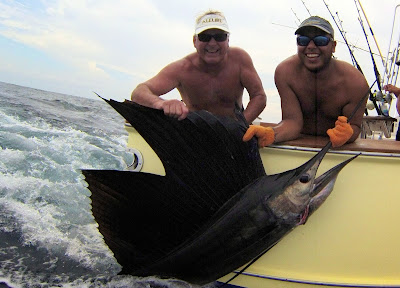 Capt Mick and mate, Enio.
As always with Mick and James we had a full on good time with them enjoying the last day of their stay in Antigua.

Happy Thanksgiving to all out there from the team at the Lodge and the crews on the boats. We are fishing Thursday through Saturday, looking forward to some more great fishing off-shore. More reports to come. November has been an awesome month here so far and things are shaping up for the season ahead. We still have a couple of prime dates available in January and February, they’ll get snapped up soon so get in touch with:
liz@sailfishoasissportfishing.com
before they go….