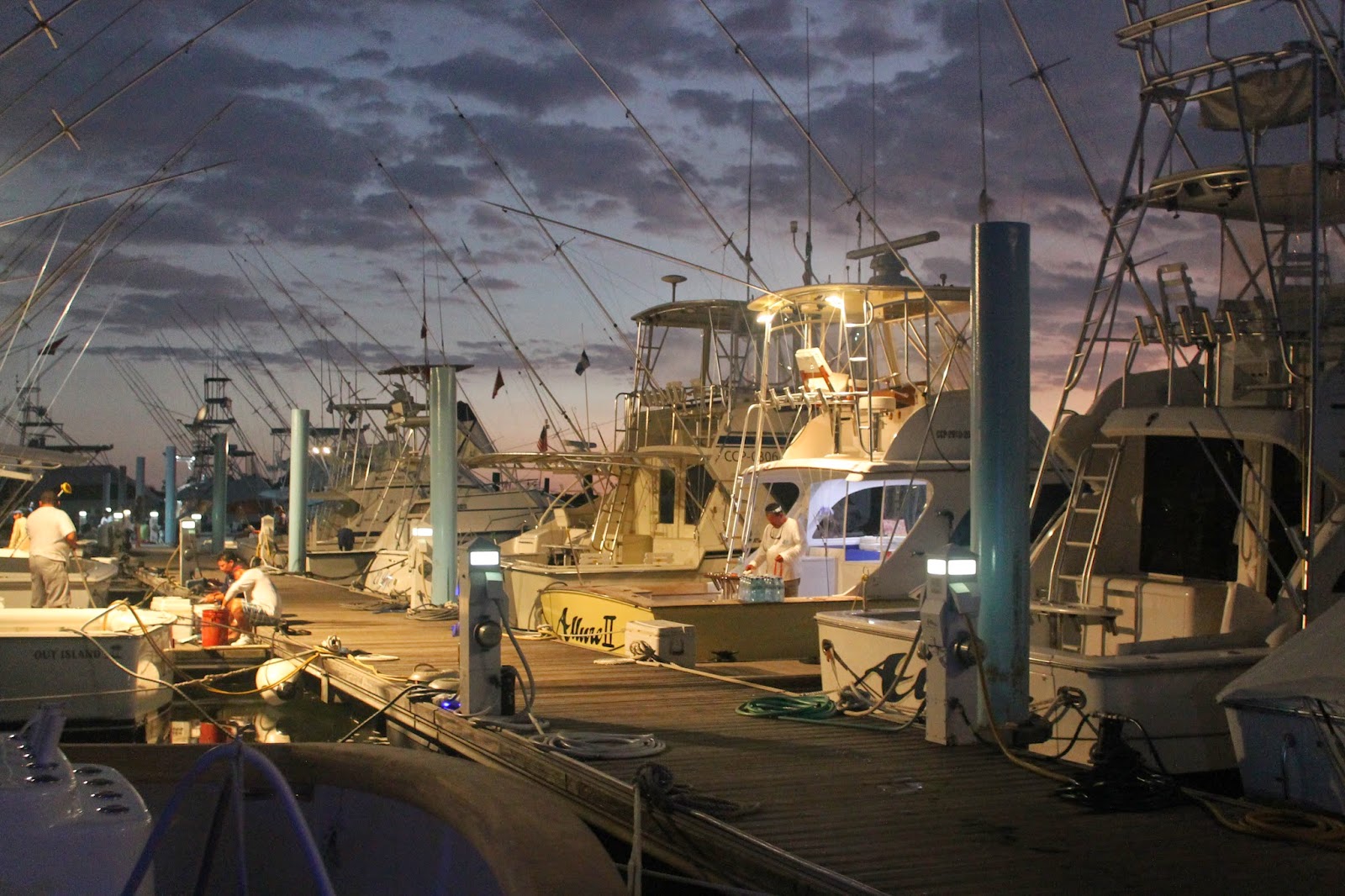 On the dock end of day one
Nov 7th through 9th Guatemala hosted the last of the 2014 PCCA series and the fishing was hot with the 12 teams releasing a record 849 billfish over the 3 days of fishing with 845 sailfish and 4 blue marlin. That is some incredible numbers right there!
We fished Team TBF on Allure II and got into the fish the first day though our practice day averages unfortunately didn’t roll over to the tournament day with 25 sailfish releases from 44 bites. We also raised 3 blue marlin on the teasers and got 2 of them to bite though lady luck was not on our side and none of them stuck! On day 2 we ran out wide to where a bite had been found the day before and the guys picked up the pace releasing 29 from 40 bites today with one of the team, Mark Wodlinger winning top angler for the day with 12 of the releases. Nice going Mark..
Seeing ‘no one remembers who comes second’, we rolled the dice the last day running to the east to try to find a bite to overcome the deficit we had incurred the first day. It was a fun day and we found some fish though not in the numbers needed with 11 from 17 and another nice blue that we missed on the rigger.
A big congratulations to Team Picaflor for taking out the Guatemala leg and to Team Tranquilo for winning the Costa Grand Champion trophy. 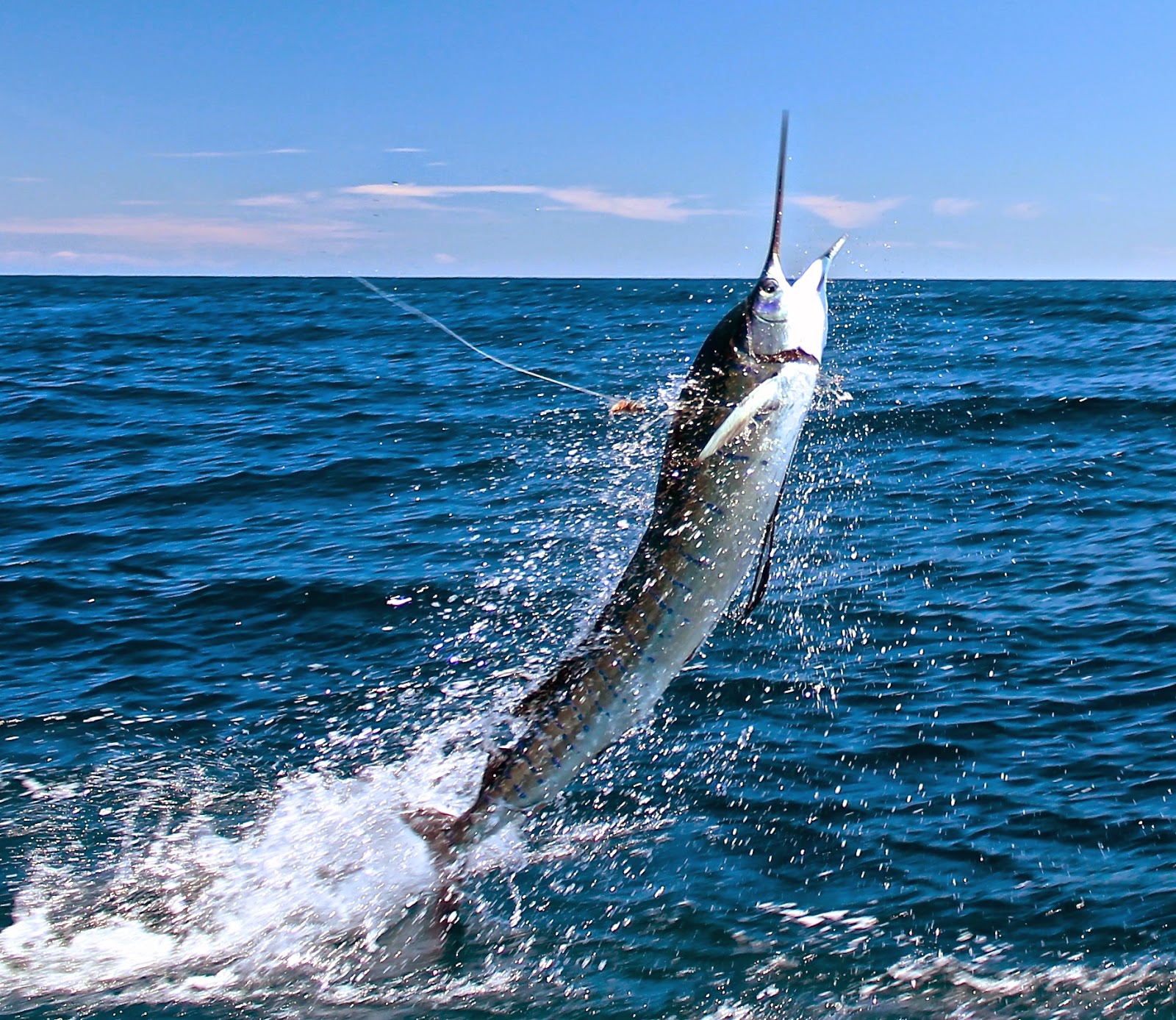 Some big sails out there…
LYN BILBERRY GROUP, 32 RELEASES 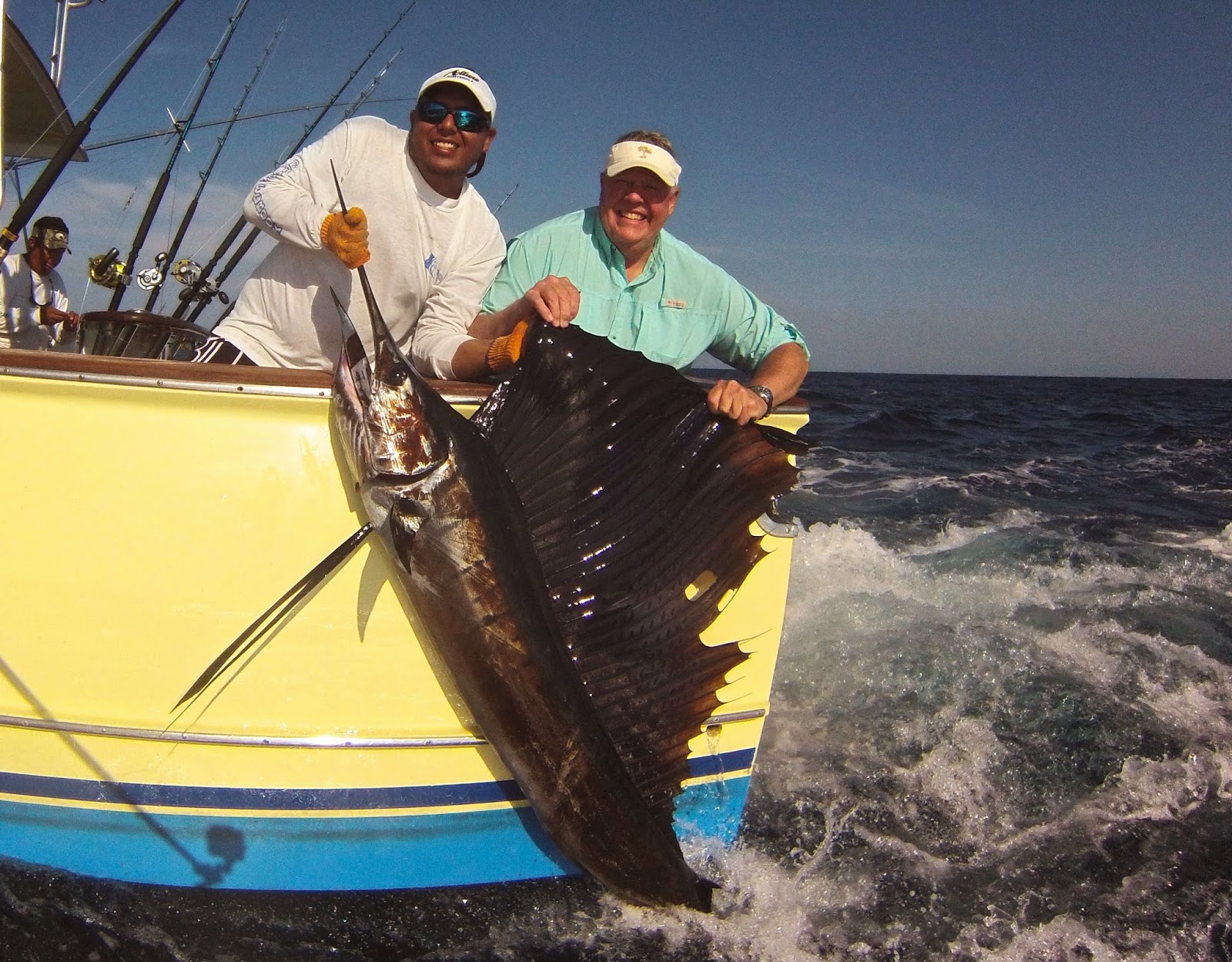 Lyn Bilberry
Nov 11th and 12th we welcomed back Lyn Bilberry, Wayne Beason and Larry Fagg returning to the Oasis to fish with us on Allure II for the 3rd time since November last year. That in itself says something of what we have going on here in Guatemala and they were not disappointed! First day we found the fish late with 8 from 12 bites though got into them good the second day with plenty of pack attacks and from the 51 raises the guys released 24 from 41 bites! Helluva day, some good mahi’s for the trip as well. 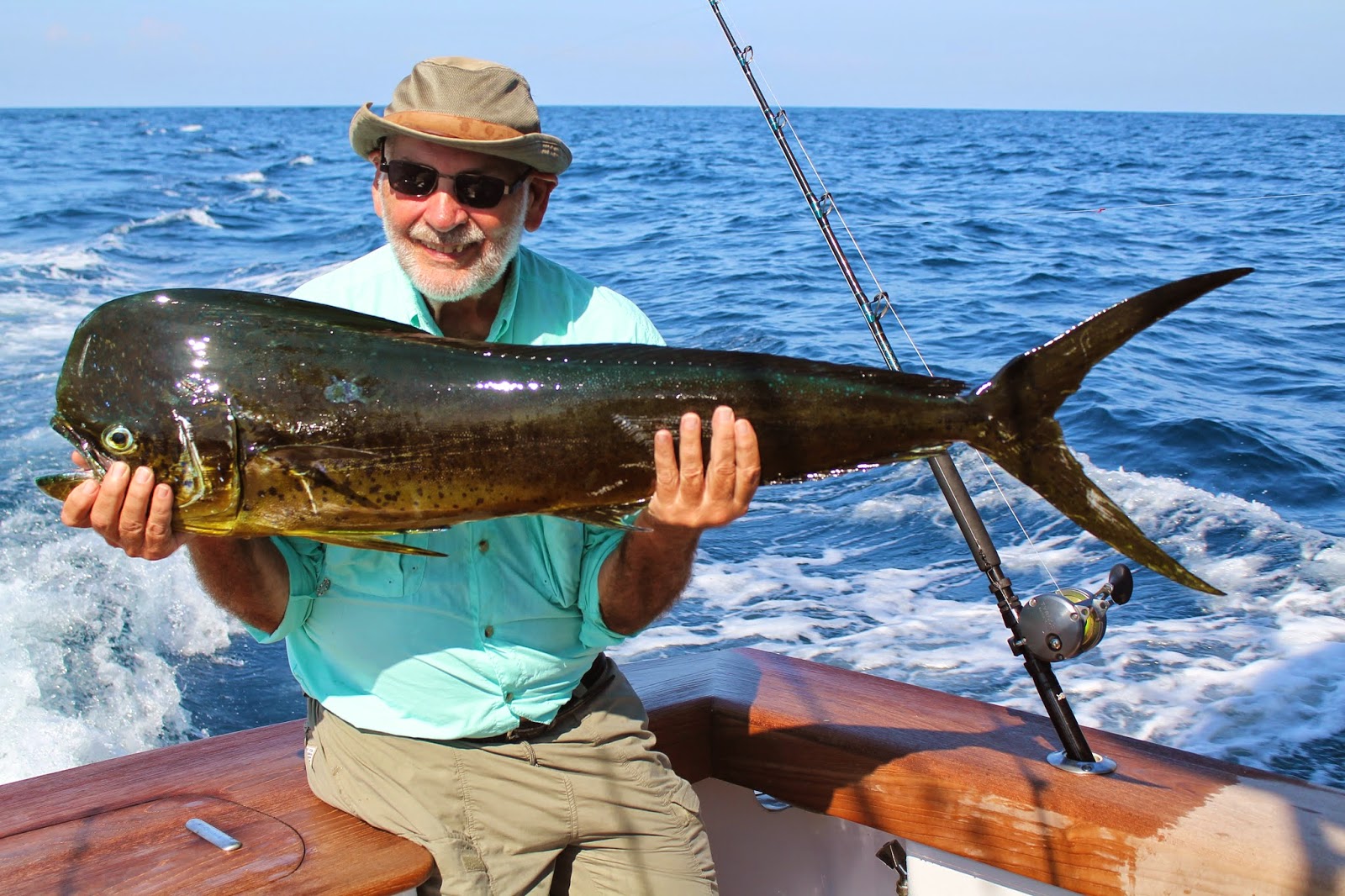 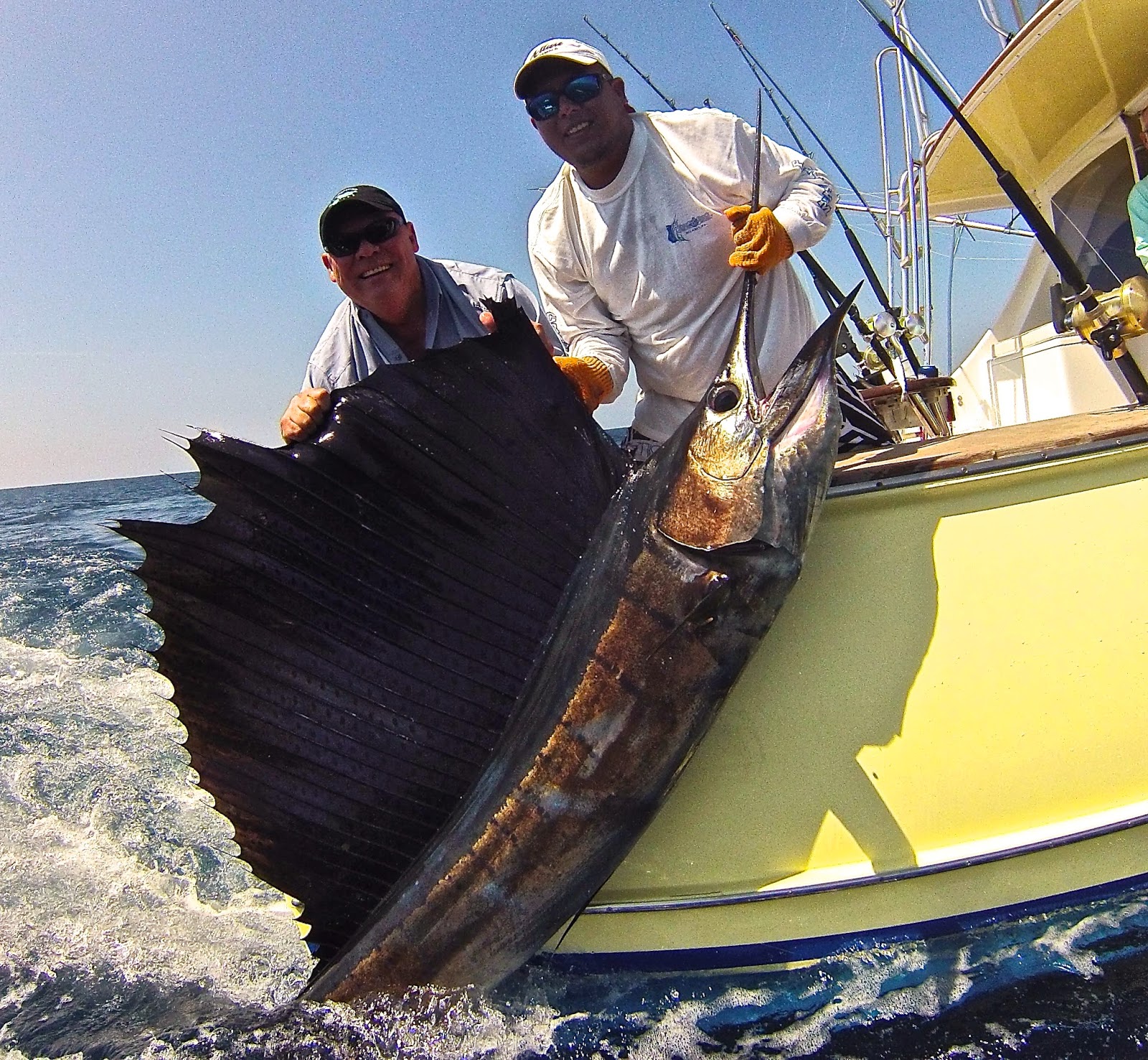 And Larry with a good’in 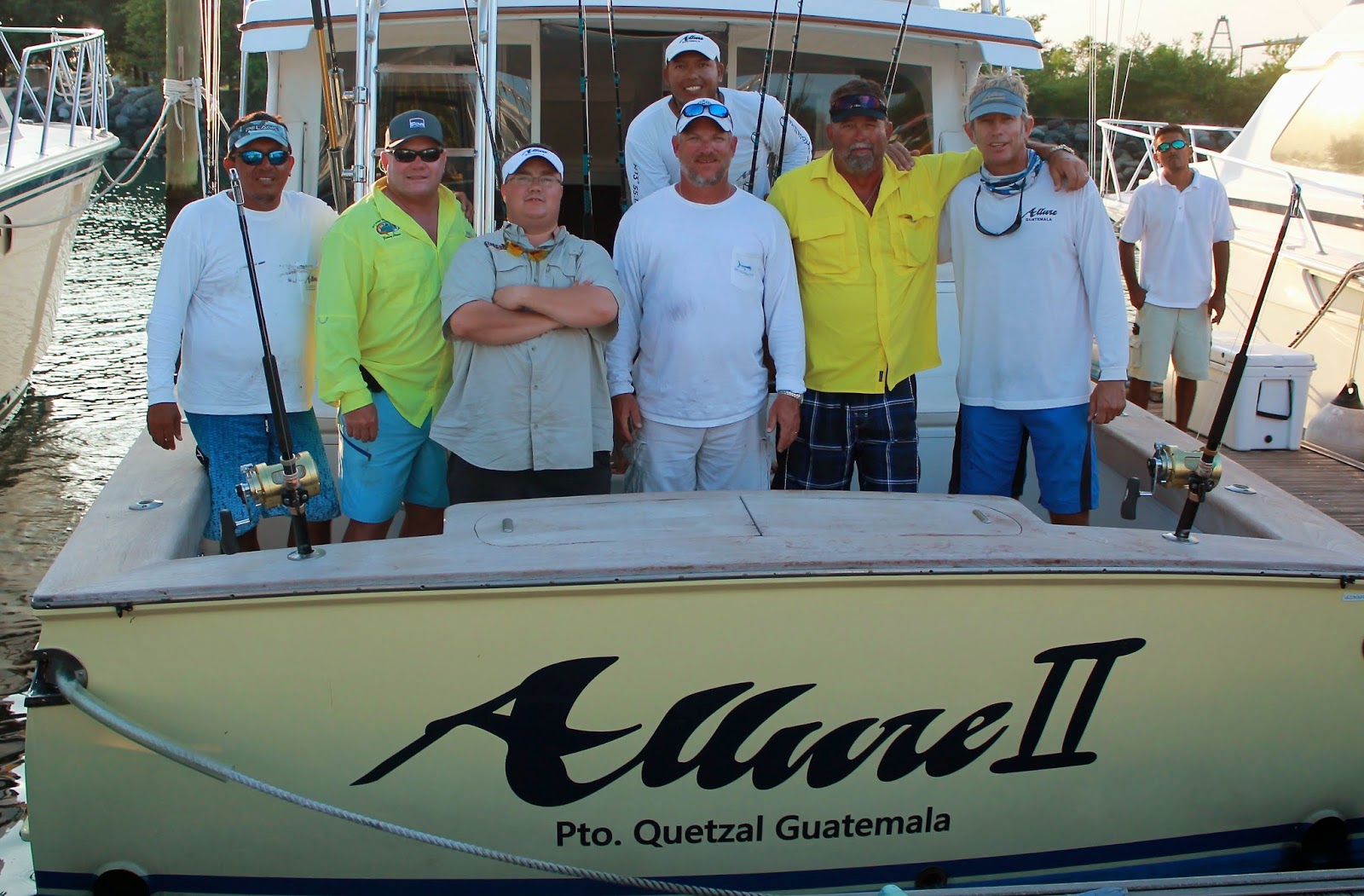 Claude Seago, Gabe Jackson, Randy Spencer and David Froop
Nov 14th-15th we hosted the guys as above along with Jamie Croft and Mike Prosperie. Fishing both Allure and Allure II the first day it was a little slow with the first signs of a cold front blowing through and a bit of wind and chop to deal with. Both boats had some good fishing though with 8 from 13 and 13 from 17 respectively as well as some big mahi’s. 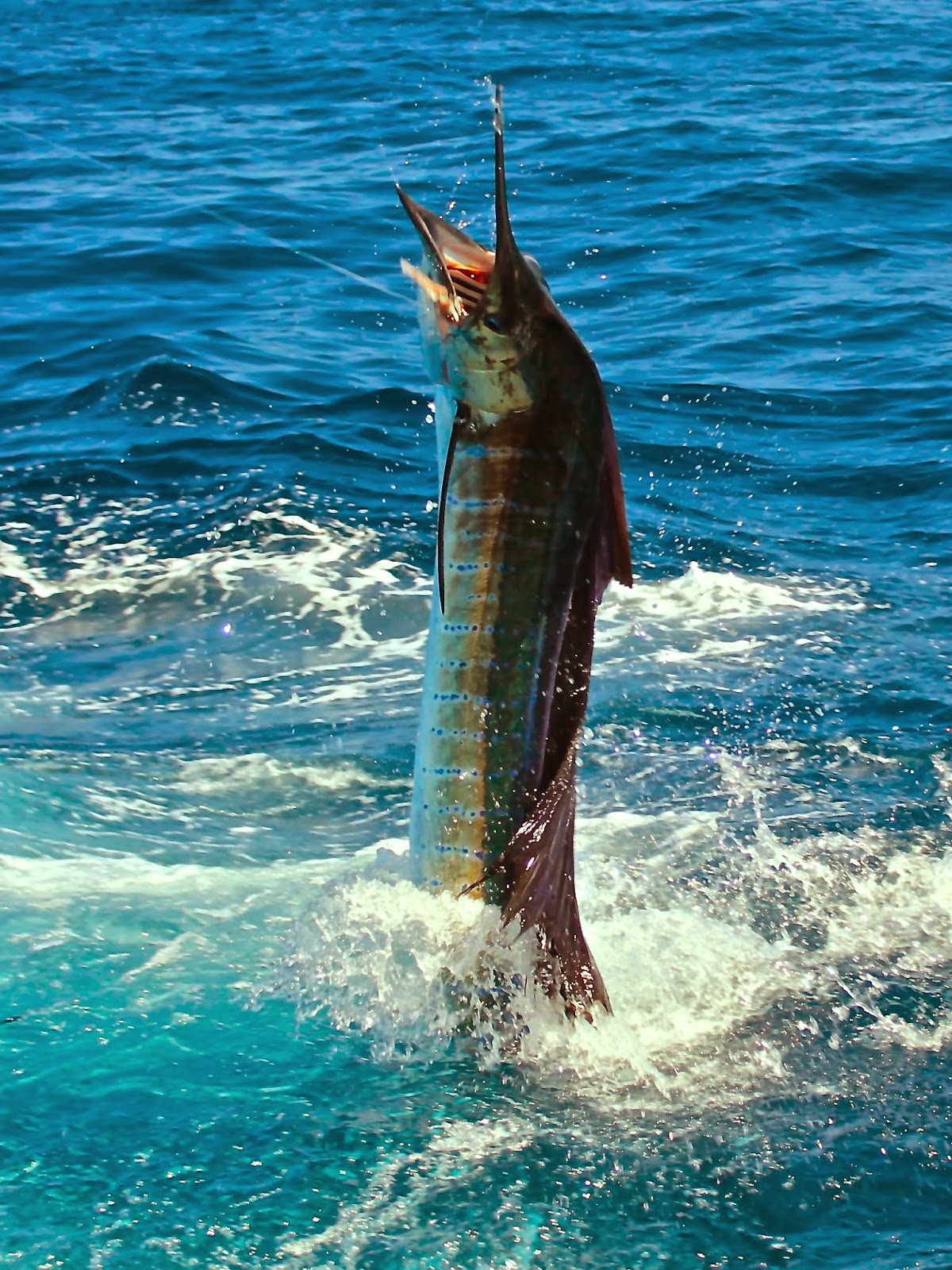 Taking just Allure II the following day we were greeted with calm seas and the fish were snapping, lots of doubles in the spread and some hot fish on the teasers. The guys made the most of the teaser bite learning the touch needed to pitch baits, let the fish eat, drop back, increase the drag and let the circle hook snag ’em in the jaw. A lot of fun out there with the crew today with 41 sailfish in the spread and 25 from 37 releases. There were some big females around….. Check out this one for David Froop!!
That is a great start to the season and as usual November is living up to its reputation of being one of the better months down here with the first 8 days of fishing producing 169 billfish releases, that is an average of over 21 a day! December is also a month to look forward to with traditionally big numbers of fish out there as well. If you can’t make it this year then start making some time for next November / December….the best weather and excellent fishing.
We just had notice of a cancellation December 27th through 30th, these are prime dates that have just opened up. If you’re looking to take the family away for a special Christmas treat then this is the place. Get in touch with us here:
liz@sailfishoasissportfishing.com