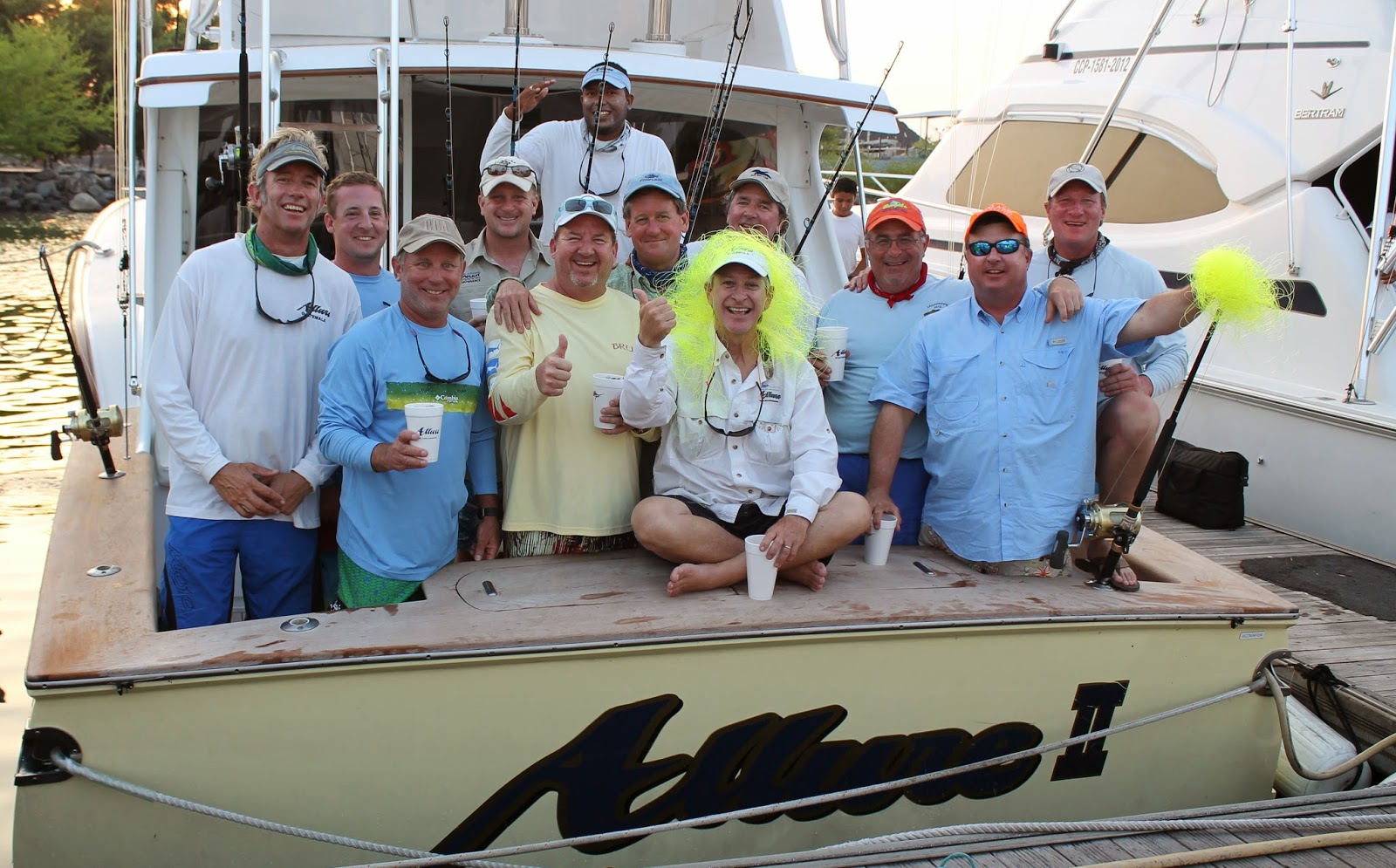 L-R: Mike, Drew Donalson, Keith, Scott, Cone, Dan Wheat, Hill Dishman, Erik Hansen, Brad Klein, Matt Rotan and Jay Hanna
March 20th-22nd we hosted the above, ‘Team Chici-Pow’, which is the local term for a backlash and probably a bit harsh as for the most part they fished well, though there was some mention of a mono-filament surcharge…..
Fishing aboard Allure with Capt Hill and Allure II both boats veered to the west the first day ‘looking’ as the bite to the east was pushing too far out and dying off (apparently). On Allure II we made it all the way down to western corner catching a few tunas and sailfish. Allure made the run across the top of the pocket and got into better action back on the eastern side so it was to the east for both boats for the next 2 days. The fishing was great, we raised plenty and had plenty of practice, there were a few missed though that’s part of it and to be fair the fish were biting a bit ‘soft’ (hence the backlashes) the second morning. Our last day out both boats were smoking in the morning session and expectations were high though the bite shut down like someone hitting the light switch and the afternoon was slow. In the 3 days the guys released 63 sailfish from 114 bites with plenty more in the spread that did not bite. Throw in a couple of 35lb+ mahi’s and a few YF tunas and it was an awesome time had by all. Good crew, plenty of laughs and good times on the boats and back at the Lodge. 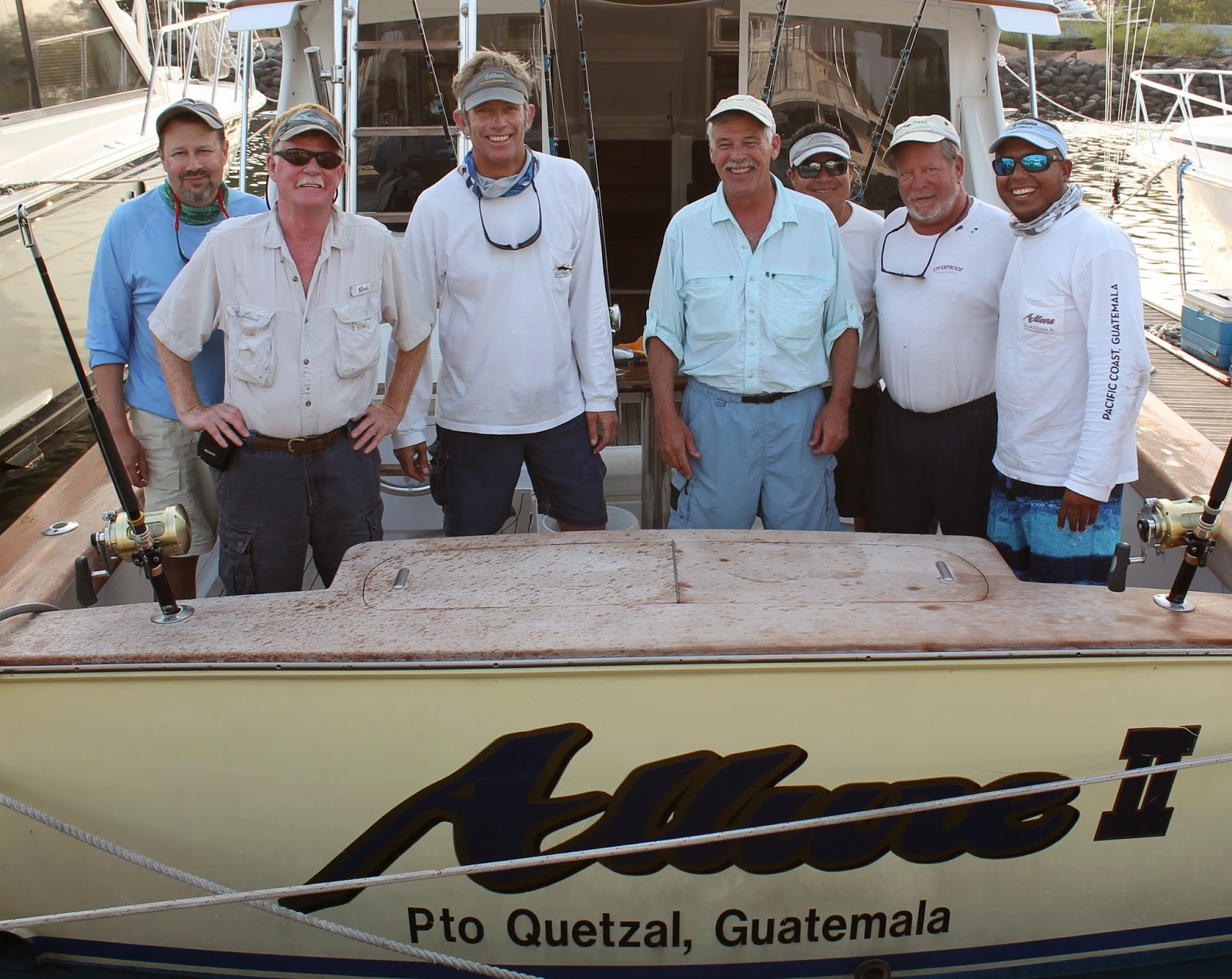 L-R: Vern Smith, Tony ‘Red’ Crain, Brian Shinkle and Andy Coultas
March 24th-26th we welcomed back Brian, Vern and Andy from St Louis, (and with good timing dodging a late spring polar blast), back to Guatemala this time introducing Tony Crain from the Florida Keys for 3 days. Once again the eastern bite seemed to be on the down so we scouted out the western edge, and came up empty. We did get into the YF tunas thick and a nice mahi though no billfish. Back to the east the next 2 days and we got into some great late afternoon action the 2nd day out with a few cover-ups in the spread. The bite was steady the last day on the water and overall it was a very good fishing with the guys doing well for their part releasing 32 sailfish from 48 bites from the 54 raised. A couple of mahi’s and a bunch of tunas topped it off. Good to see the crew back here and timing their trip well for the weather and the bite. 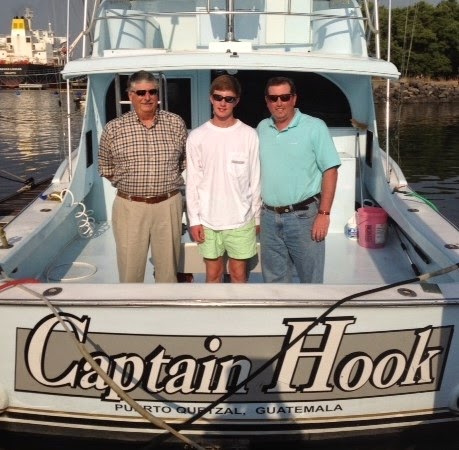 Jenkins JR, Jenkins III and Isaac IV
March 24th and 25th we hosted 3 generations of the Mikell family to the OASIS fishing aboard Capt Hook. Jenks III fished with us years ago out of the old Fins n Feathers Lodge aboard Coyote II, so it was great to see him back here after all these years….even wearing the old F’n F Coyote II t-shirt….on ya Jenks!! He introduced his dad and son to this fishery and the guys timed it well. 7 releases from 11 bites the first day out and 19 from 31 second day. Isaac was into it baiting them like a pro by the end of the second day, plenty of multiples in the spread and an awesome family trip. Looking forward to seeing the Mikell’s back here soon!! 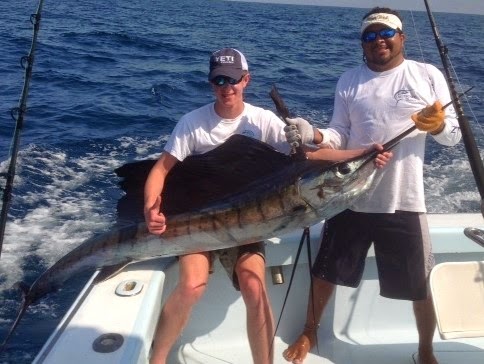 Isaac with a  beauty… 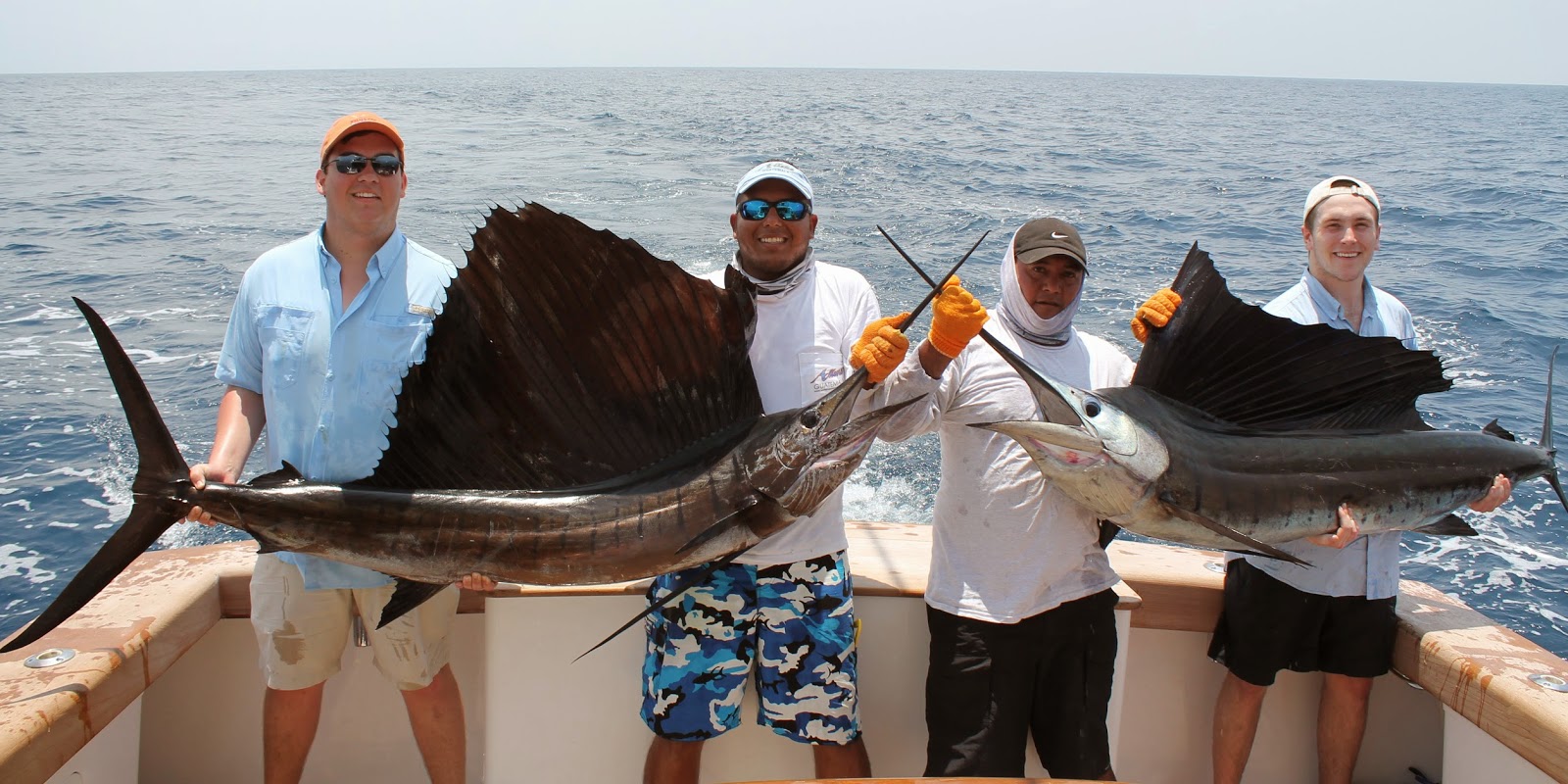 March 28th-29th we hosted Todd Johnson and Steve Goodchild along with Todd’s son Will and College buddies Jay Crawley, Zachary Sims, Luke Nixon and Taylor Mullen. Fishing was a bit on the slow side and fleet was spread out and looking, we found some reasonable action the last afternoon and for the trip we raised 23 sails, got 18 of them to bite and released 9. We had another good haul on the YF tunas with over dozen boated so all in all another good trip out with Jay, Zach, Luke and Taylor getting into their first billfish releases.
On Allure John Goodchild hosted a Stallion crew of James ‘Jimbo’ Matheny, Troy Brownmiller, Michael Ray and Chris Buchanan over the same dates and the guys got into some big mahi’s a few sails, missed a blue marlin on a live bonito and generally had a large time down at the Oasis… 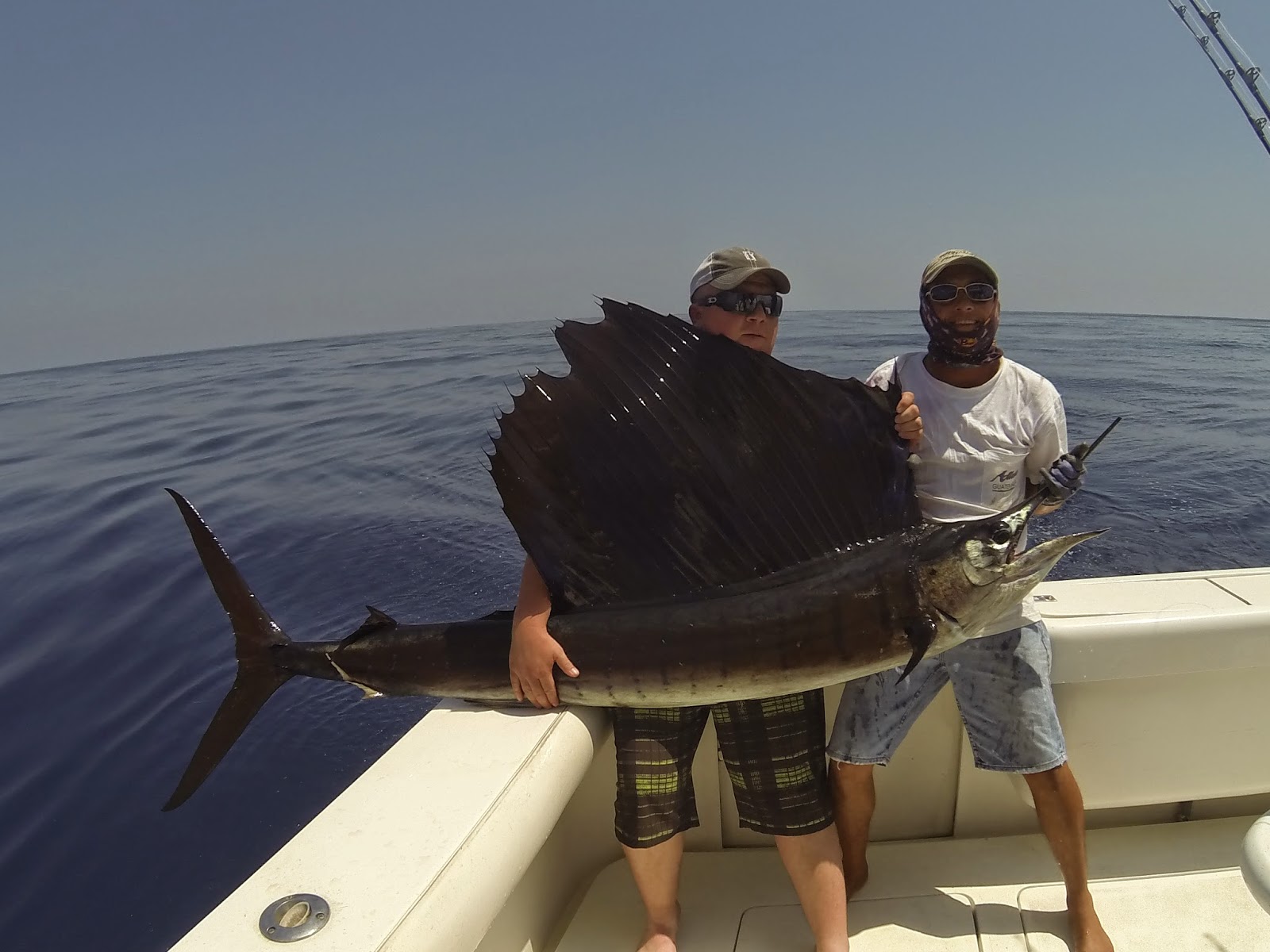 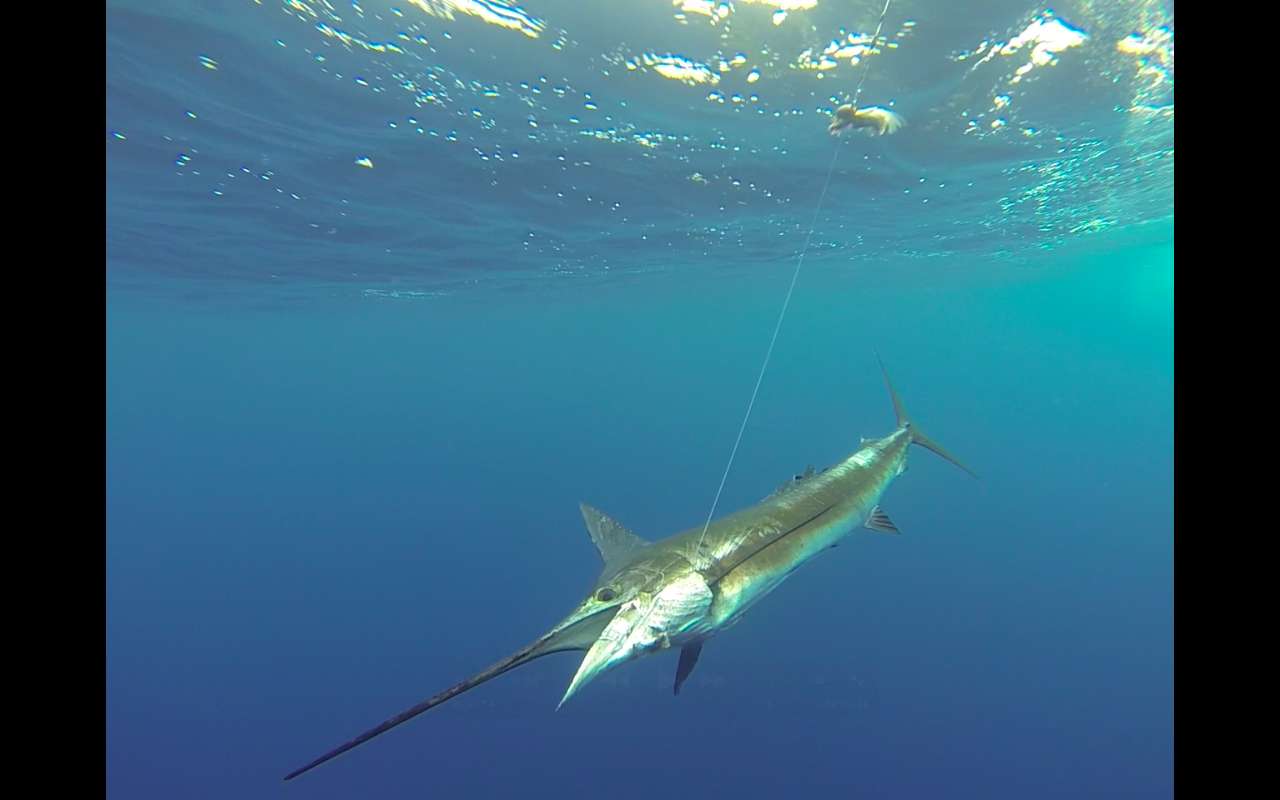 Great underwater shot from John Goodchild
March 31st we were lucky enough to fish with Sage Rods CEO Travis Campbell for the day. Travis and family from Bainbridge Island was in Guatemala visiting family in Antigua and took time out for a day trying to get his first sailfish on the fly. Along with daughter Samantha and cousin Walker Spoor we ventured off-shore with a 30NM run to get to the blue water. 10 yr olds Samantha and Walker were real troopers in choppy conditions and both released their first sailfish on the conventional tackle…. 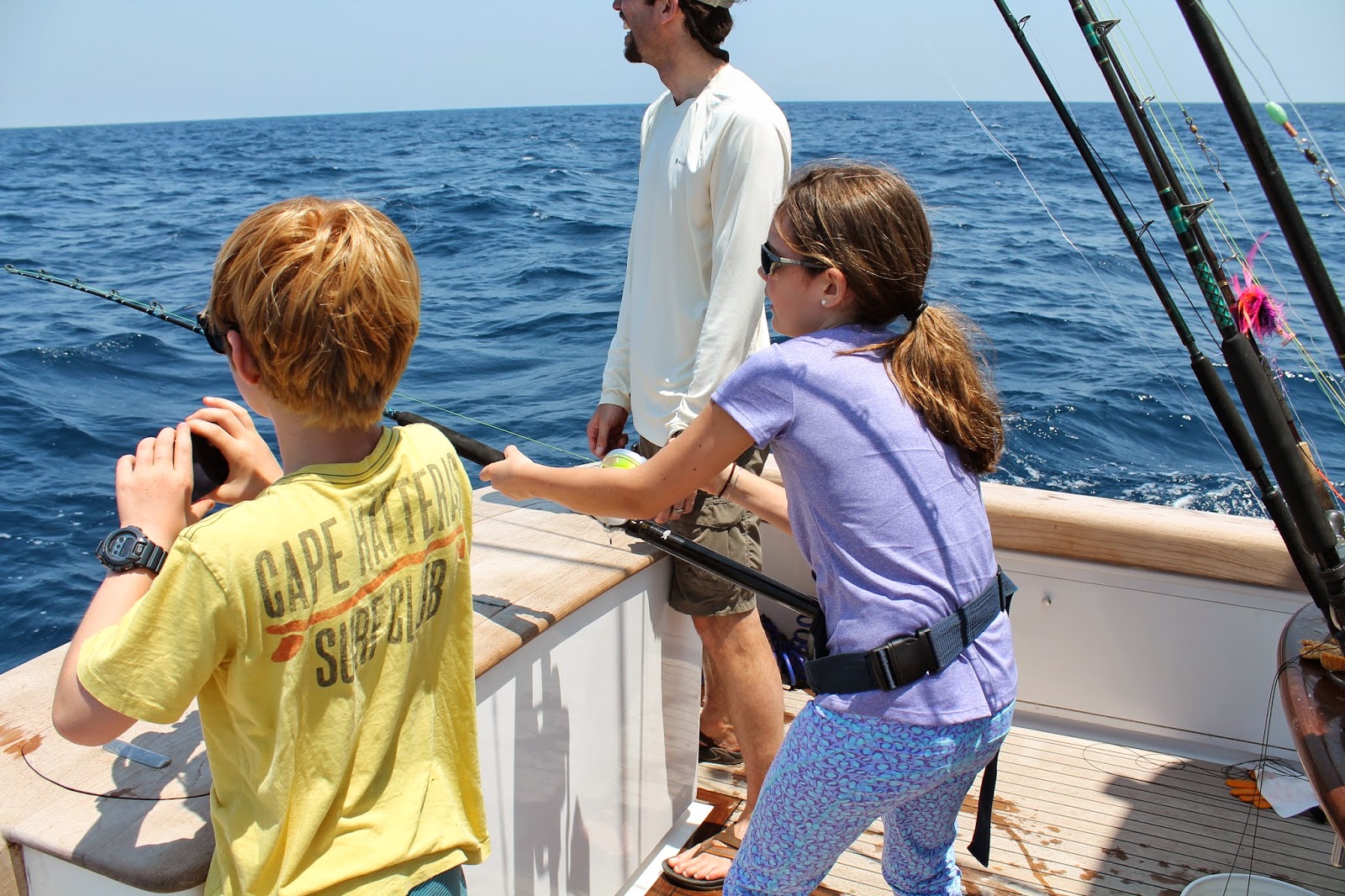 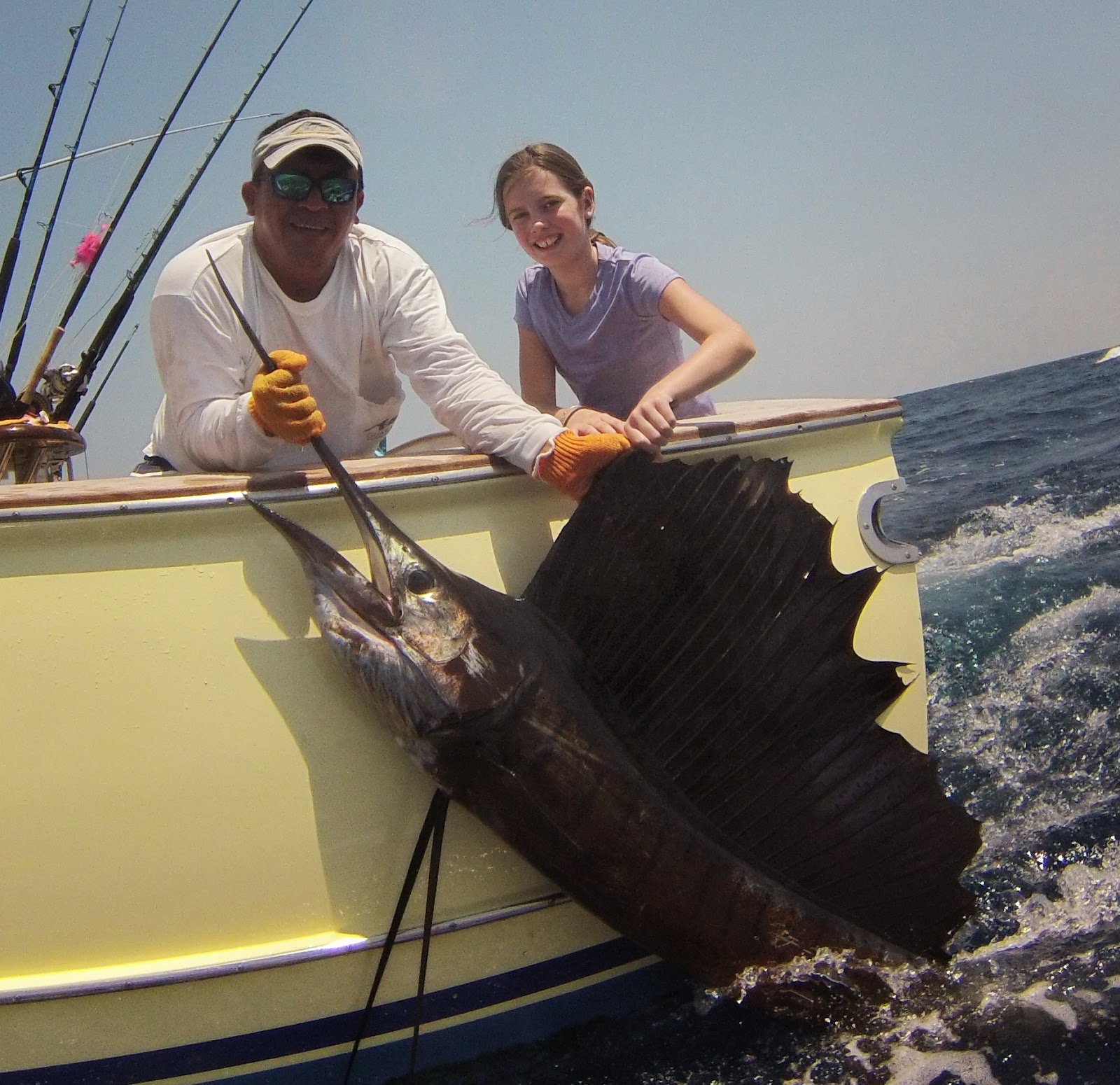 Samantha doing battle and with the results… 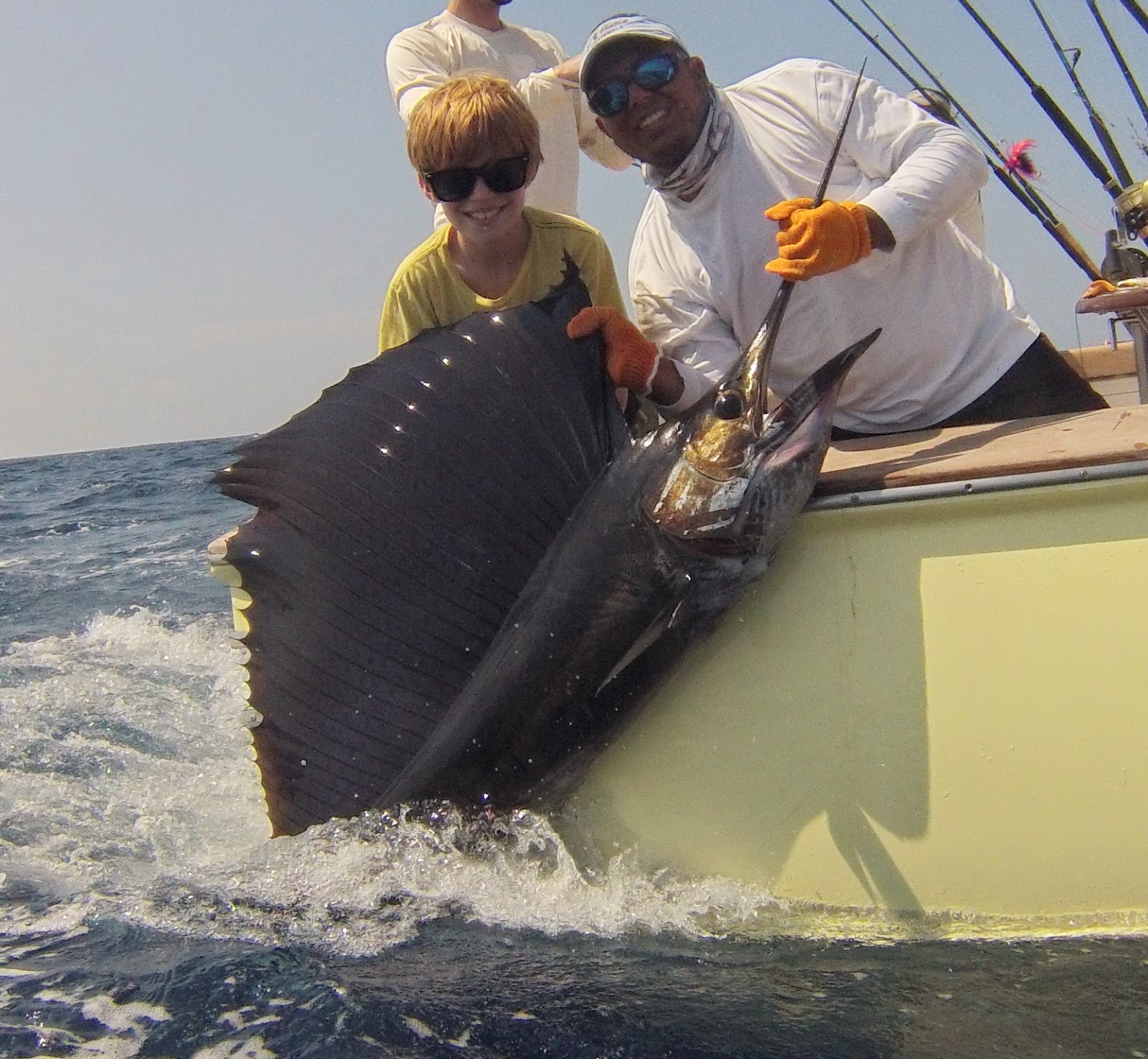 And Walker with his first sailfish..
As well as sailfish Samantha boated a nice mahi. For the day we raised 15 sails and released 3 from 6 bites on the conventional, we teased in 9 to the back of the boat though it was tough as they were not coming in strong on the teasers. We did cast to 4 and got 3 to bite the fly with one throwing the hook, the other missed on the bite though Travis did a fine job on the Sage 13 wt flyrod with this nice sail released… 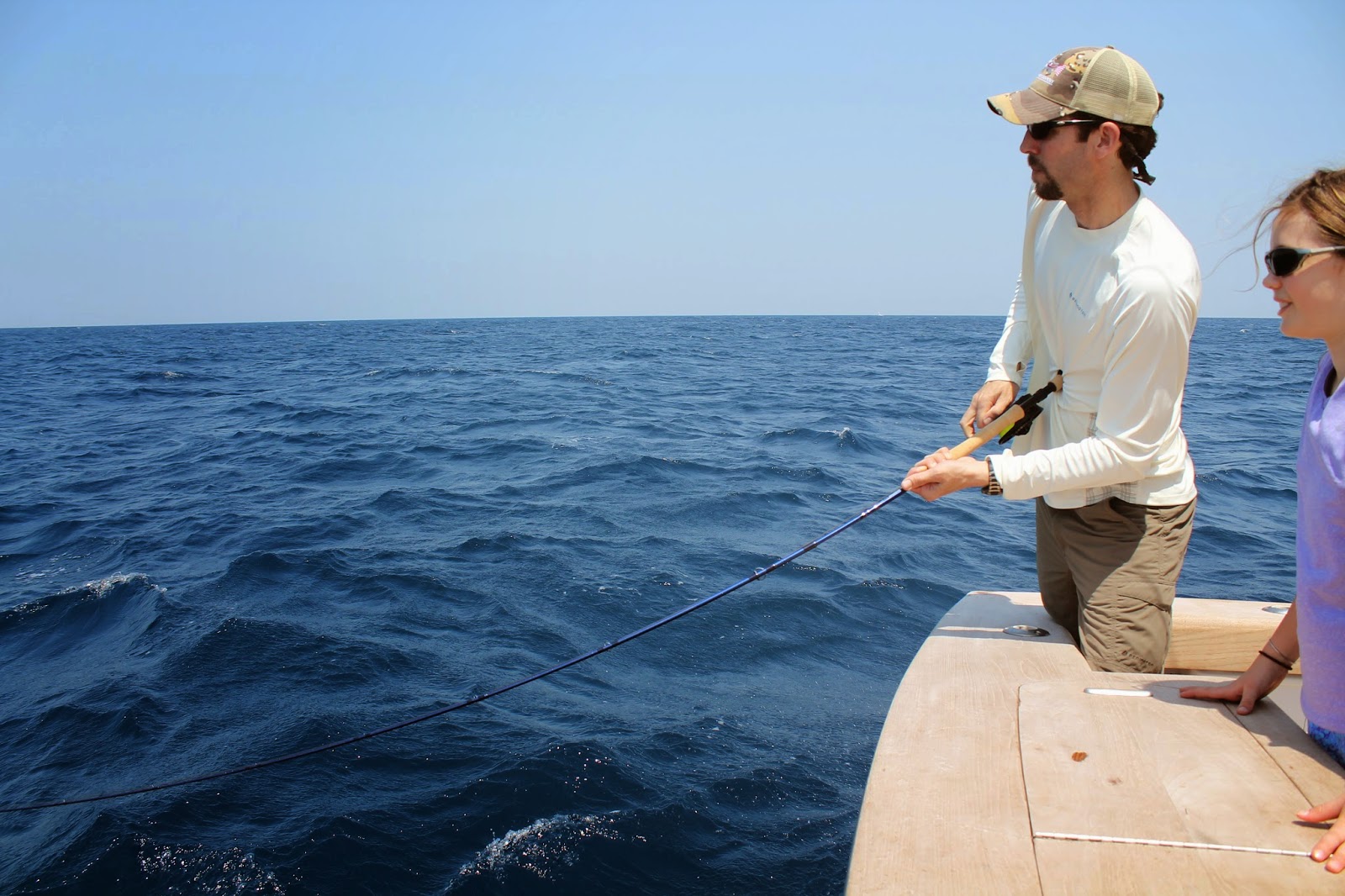 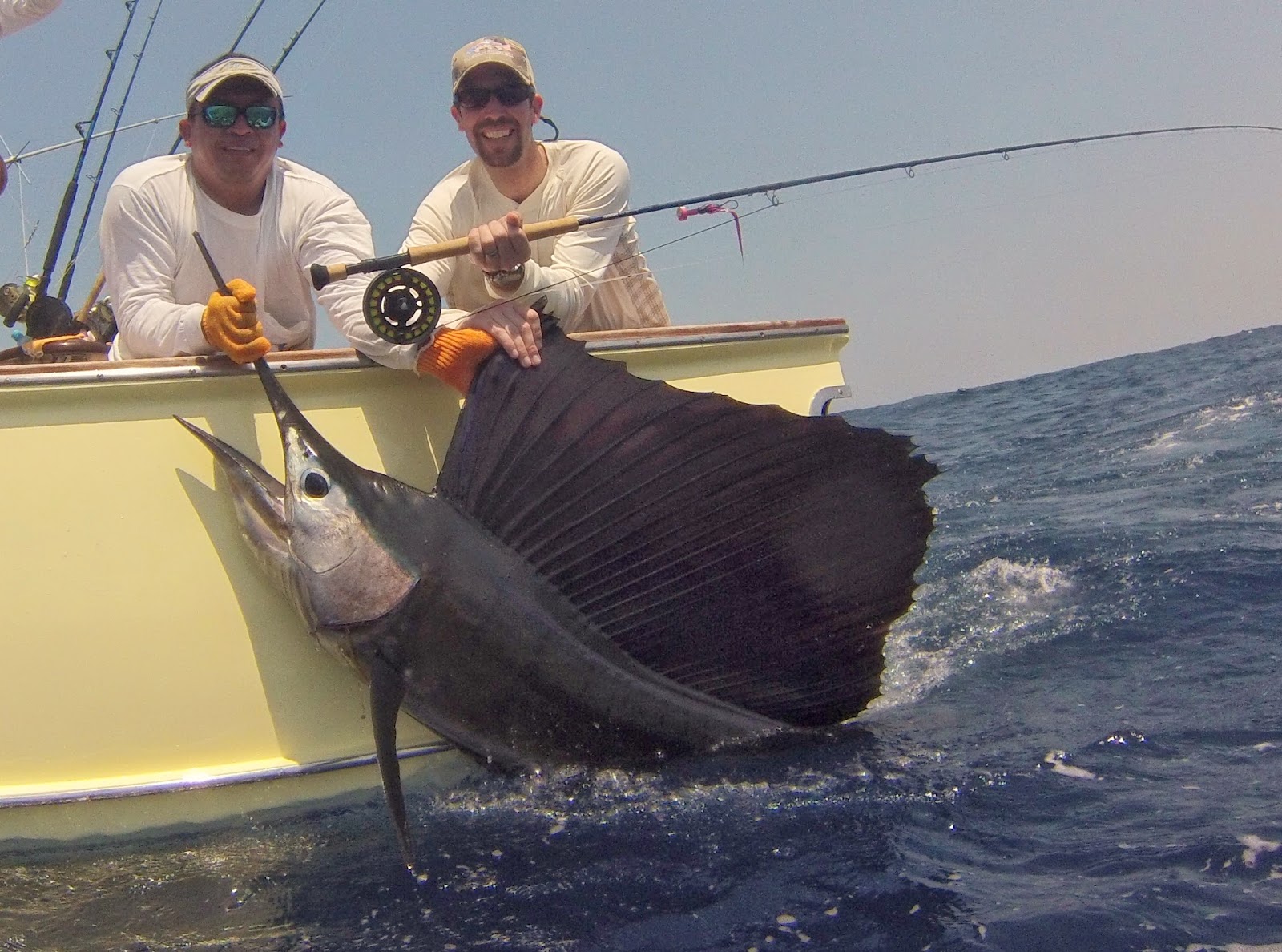 Good stuff and another fun day on the water.
We have a couple of days in though are back out there this Friday and are looking fairly booked right through April though we do have 20th-22nd open if anyone is interested. Allure has some availability through April and May is starting to book up, it is another great month down here as mentioned previously with plenty of tunas, mahi’s, sails and marlin in the mix. Lots of beautiful dark blue water pushing in right now so it is all looking good for the weeks ahead. We’re anticipating a great April and beyond here in Guatemala….