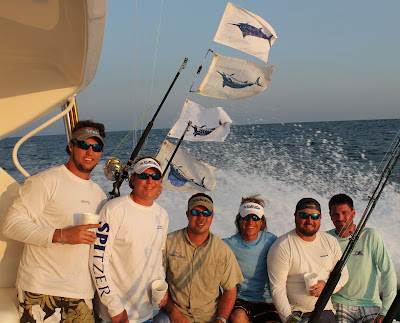 March 22nd and 23rd we welcomed the above crew in for 2 days of fishing on ALLURE and D.A. Hughes “Despedida Soltero”…….Bachelor Party weekend. First morning after running 15NM out to the western side of the pocket we had the lines in the water for about 10min when a blue marlin crashed the right bride teaser.  The fish teased in nicely, DA had the bait back there and we got a great bite on the pitched mackerel, after coming tight he soon released a blue of about 220lb on the 50lb stand-up…… 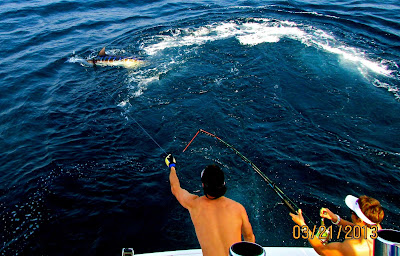 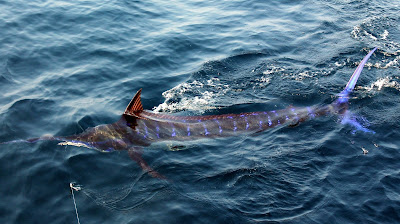 Jasen on the leader with DA’s seriously lit up blue

Way to start the trip DA!!! We fished the area for about an hour though with the amount of boats in the area the bite seemed slow so we pushed off out wide. The guys are all experienced Gulf Coast blue water fisho’s and it showed going 4 for 4 on the sails out there and Matt boating this good eating size mahi… 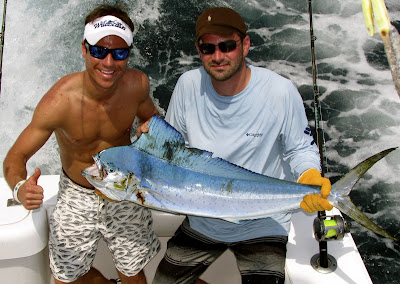 The boats that stayed closer inshore worked away all day and released anywhere up to 8 sails though out wide on the drop off we saw birds and bonito’s working and things looked good despite only raising 5 sails out there.
Next morning we had a late start and on the run out to the drop off were diverted by a group of spinners up on the flats in about 400ft of water. A quick troll past revealed little and on the way out to the edge we soon had Will doing a great job getting the bite from a stripe marlin that hit the two left teasers before dropping back to the rigger bait, the fish fought hard and after about 10min on the rod Will got the release. 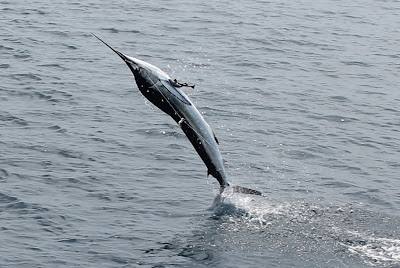 Will’s stripe marlin of about 90lb

Working the area we raised 3 sails and released 1 from 2 bites before we had another stripey in the spread, after moving from teaser to teaser DA got the bite on the pitched ballyhoo bait. Again, great work had him come tight and he made short work of this 80 odd lb stripey releasing him in no time. Another good start to the day and for Guatemala the hard ones out of the way early when thinking of a slam. With that in mind we worked out to the edge releasing one more sail before approaching one of the steeper drops along the bank and raising the one we were looking for, the blue crashed the right bridge teaser, came in hot and after a few seconds of DA having the mackerel in the spot he got the bite, came tight and we were on…… 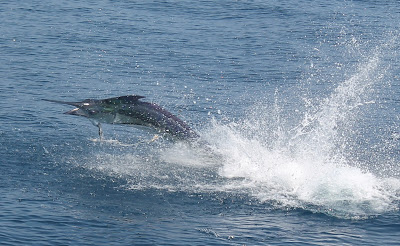 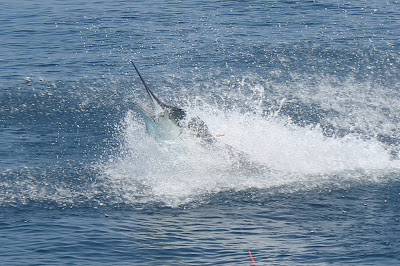 A tough, solid 250lb fish and after about 20min we got the tag in and let it go. Congrats DA! Grand slam on ALLURE, we’ve had our chances in the past though this was a first for the boat so nice going. For the rest of the afternoon we saw plenty of free jumping sails and had 4 hot teaser fish come in releasing 3 of them with one going ballistic and throwing the hook as it charged back at the boat. Day’s end 1 blue, 2 stripeys and 5 sails. Great fishing guys, missing only one bite in 2 days. The crew were tricked out with Go-Pro cameras and DA put this short clip together, worth a watch!!

The sail bite out there is still a bit slower than average though we did see plenty of jumpers and the bite could turn on at any time. The good news is the blues have started to show up with several released among the fleet in the last few days and the water temperatures seem to be slowly coming back to normal for the most part. I still think April is going to be a great month down here and into May for both the sailfish and the marlin bite. We have opening’s in April and then again into May. In reality the fishing is good here right through end of August so if anyone has any plans get in touch and we’ll do our best to get you on them…..