The bite has been pretty good here in Guatemala, we’ve had our lulls, though found the fish again and experienced some periods of madness with the sailfish attacking the spread as soon as it has been put back out. Moments to remember!! Guests staying at the OASIS have released 489 billfish over the past 12 days of fishing with several yellowfin tunas and plenty of slammer mahi’s to mix it up. We normally start seeing more blues in the later stages of March and through into April and on over into the summer months. We have some openings in May and are looking forward to the next few months as they are some of our favorite times to fish here, plenty of diversity. We have a few openings in April for ALLURE and into May we have some prime dates available on ALLURE II. Here is how it has been…. 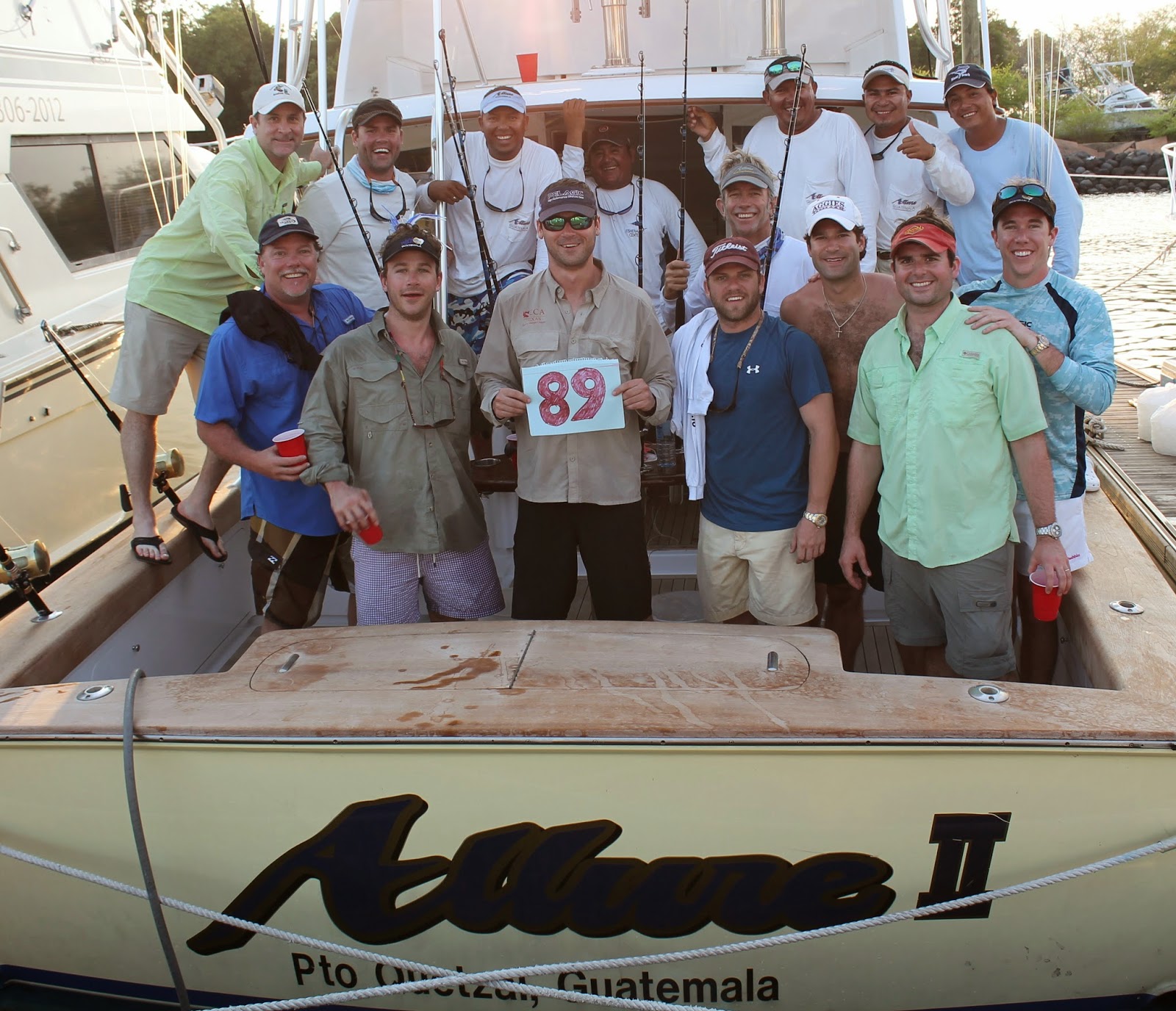 Mark Gabrich, Brian Burgher, Shelby Gibbs, Edward Bogel, Tracy Gibbs, Doug Miller, Steven Douglas, Fisher Maddox and Clay Bush.
March 7th and 8th we hosted Tracy Gibbs and buddies from Beaumont, Texas for his Bachelor Party weekend, Shelby and Fisher are regulars down here showing the rest of the crew what Guatemala is about. Fishing started a little slow the first day with 19 releases between the 2 boats Allure and Allure II. On Allure II out on the edge in the late afternoon we got into some beautiful dark blue water, spinner dolphins and the sailfish and tunas started to bite. We boated 5 tunas and 5 sails in the last part of the day and hopes were high for the following day. Next day it turned on, the fleet was spread over 15NM and they were biting. Again, late in the afternoon we experienced a RED HOT sailfish bite. 19 releases came in the last hour…..it was mayhem, the teasers would be back in the water and there were hot sails coming in aggressively. Awesome to see and the guys left on a high with 89 releases over the 2 days, 5 yellowfin tunas and several large mahi’s. 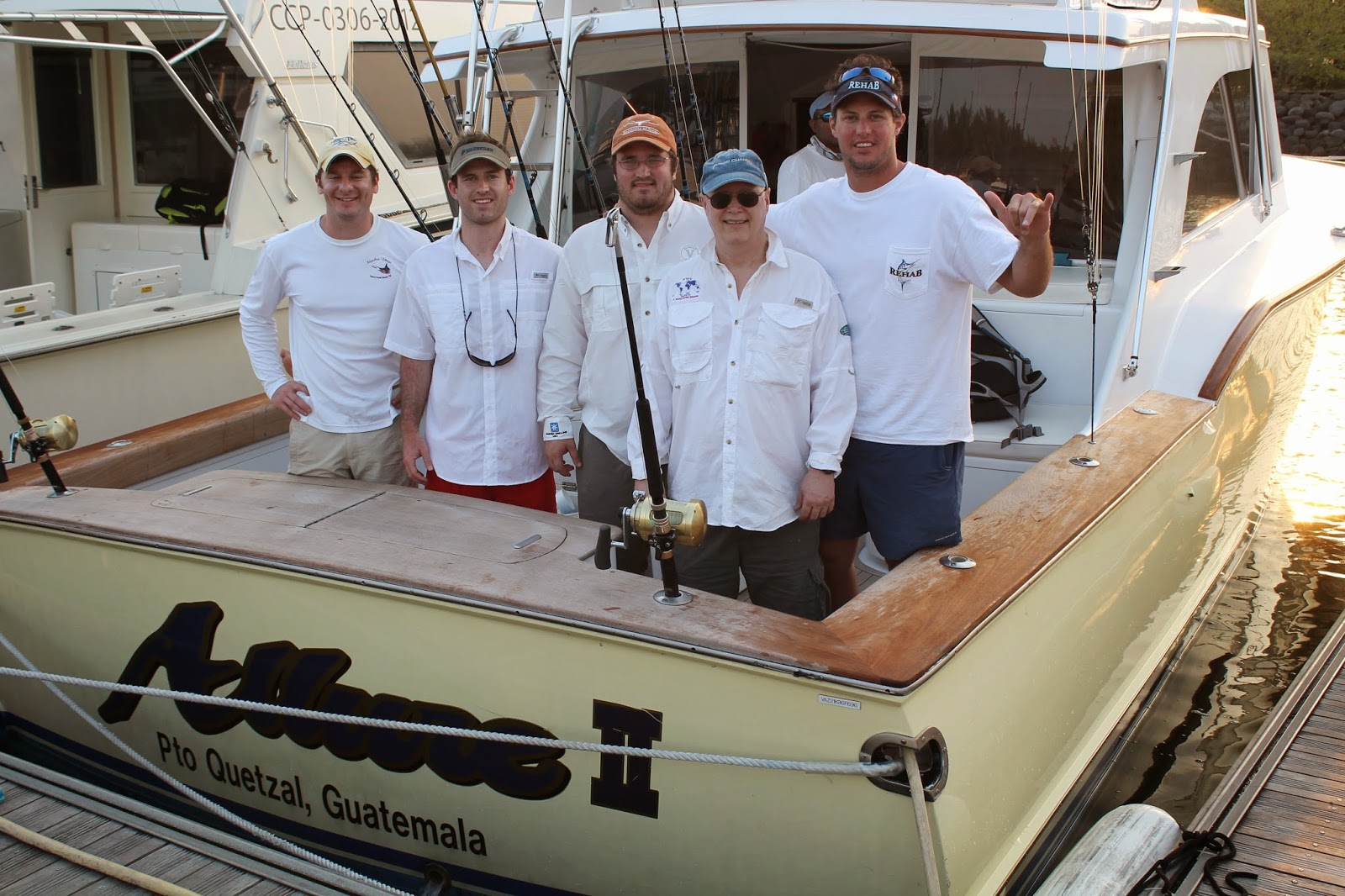 Will Watson, Taylor Cotton, John Cotton, Mike Cotton and Jasen Gast.
Next couple of days March 9th and 10th we welcomed back Jasen Gast who fished with us last year, this time introducing the above group to this amazing fishery. First day out we covered some area though never really found our ‘hole’. We ended up the day in amongst the fleet and still had a blast releasing 36 from 49 bites with 58 raises for the day. 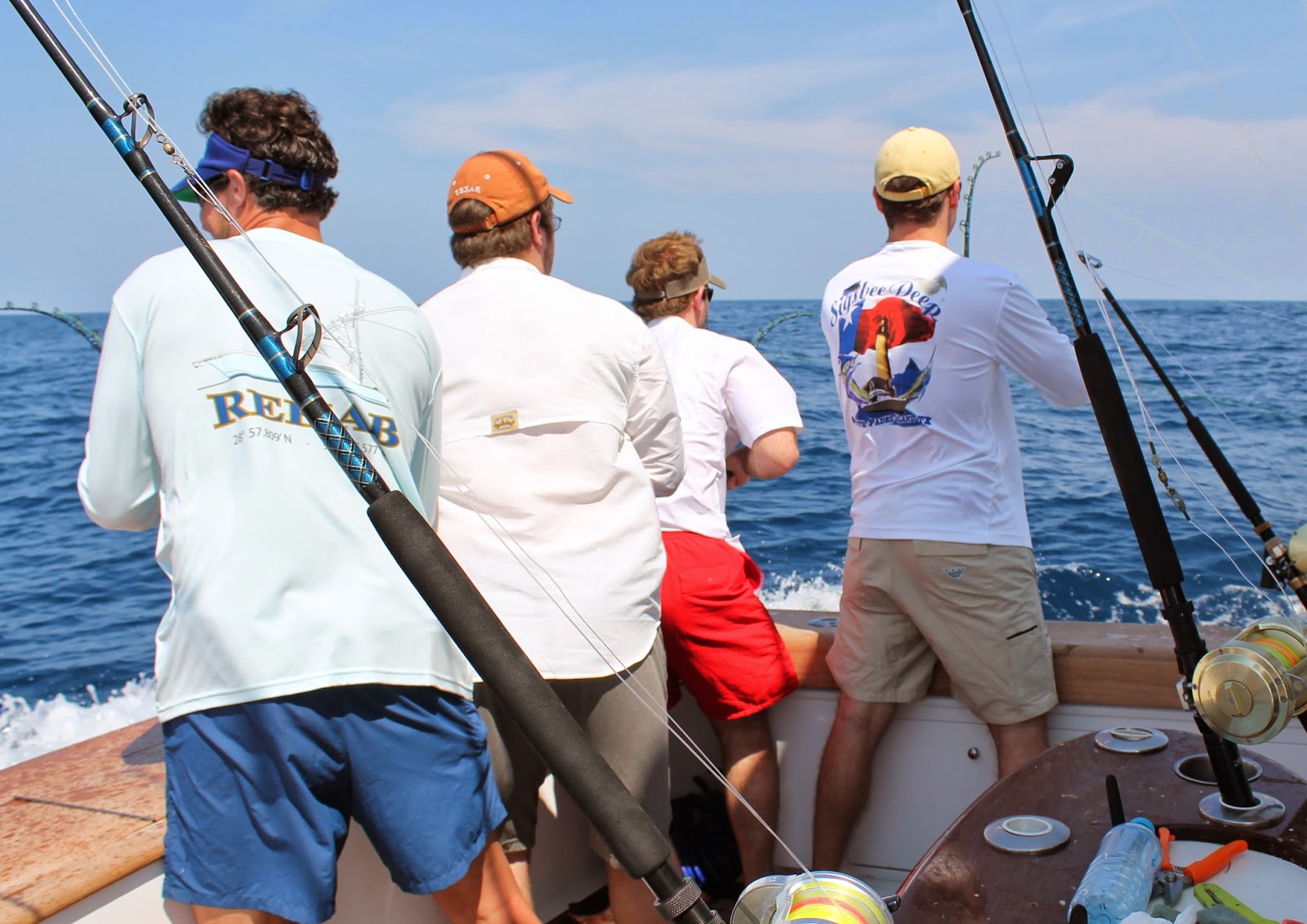 Another quad hook up!!
The following day we found our groove and a hole late in the day that produced. A couple of quad hook-ups, plenty of double headers and from the 56 sails raised today we released 41 from 52 bites. Great averages and an excellent day on the water with the crew, Jasen doing a great job on the deck…. 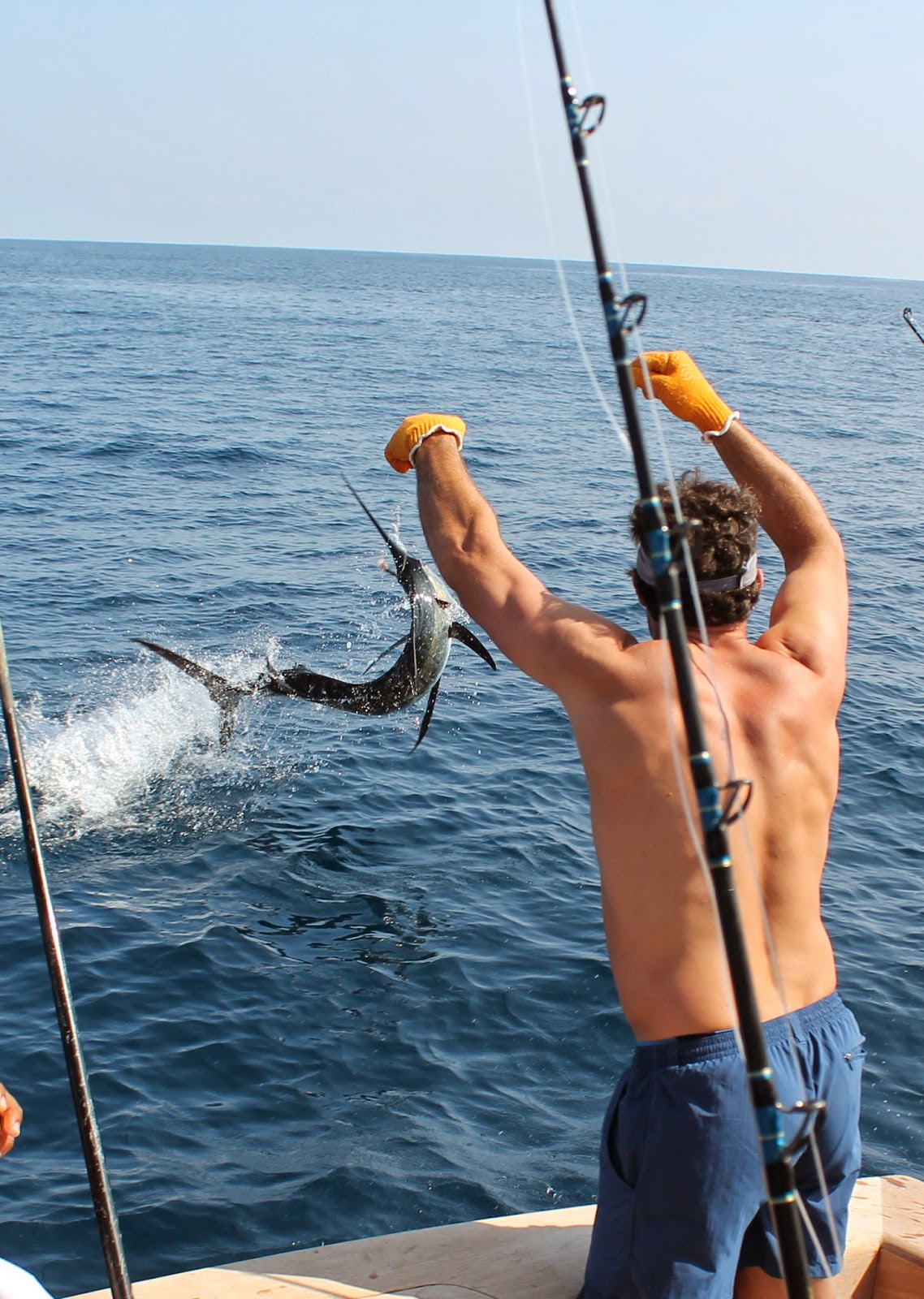 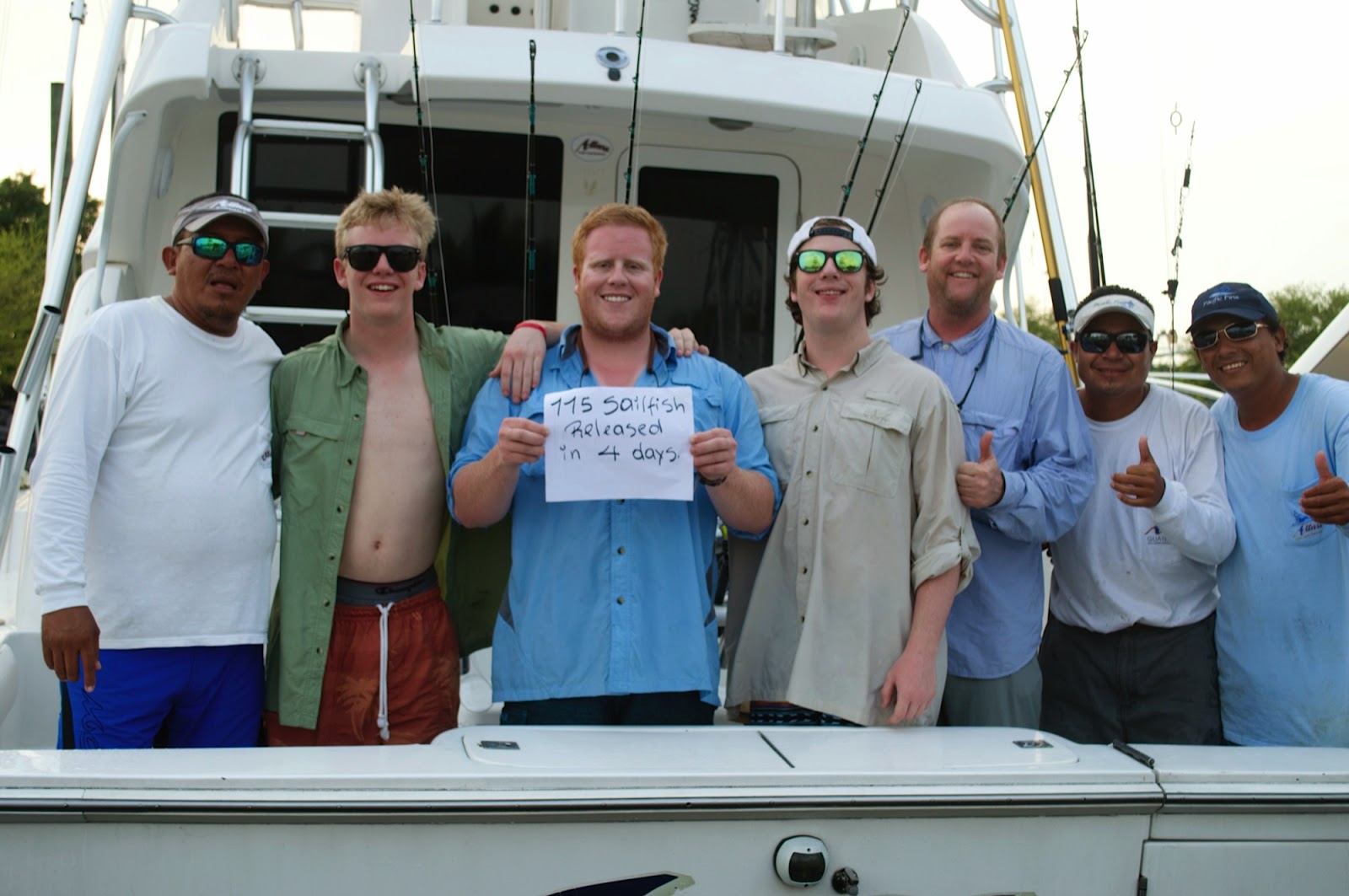 March 9th-12th we fished Jeff Hamling with his sons, Sam, Hunter and Logan along with friends Ed Fischer Snr and Jnr. We fished Jeff years ago and it was great to see him back here with his sons this time. They fished Allure the first 2 days experiencing the same great bite releasing 32 and 24 respectively. Their 3rd day out we were lucky enough to get them out on Allure II and the morning bite went off!! At midday we had a goal of 50 in our sights, then it got over-cast and the bite dropped off. We still had an excellent time together out there with 63 sails in the spread, and 39 releases from 56 bites. The next day with the Fischer’s flying out, team Hamling fished Allure releasing another 20 sails. An incredible trip for them with 115 releases in total and a bunch of XOS mahi’s that took some good angling efforts by the boys to get boatside. Not to mention some of those sails that stayed down…Nice going and we hope to see you guys back here soon!! 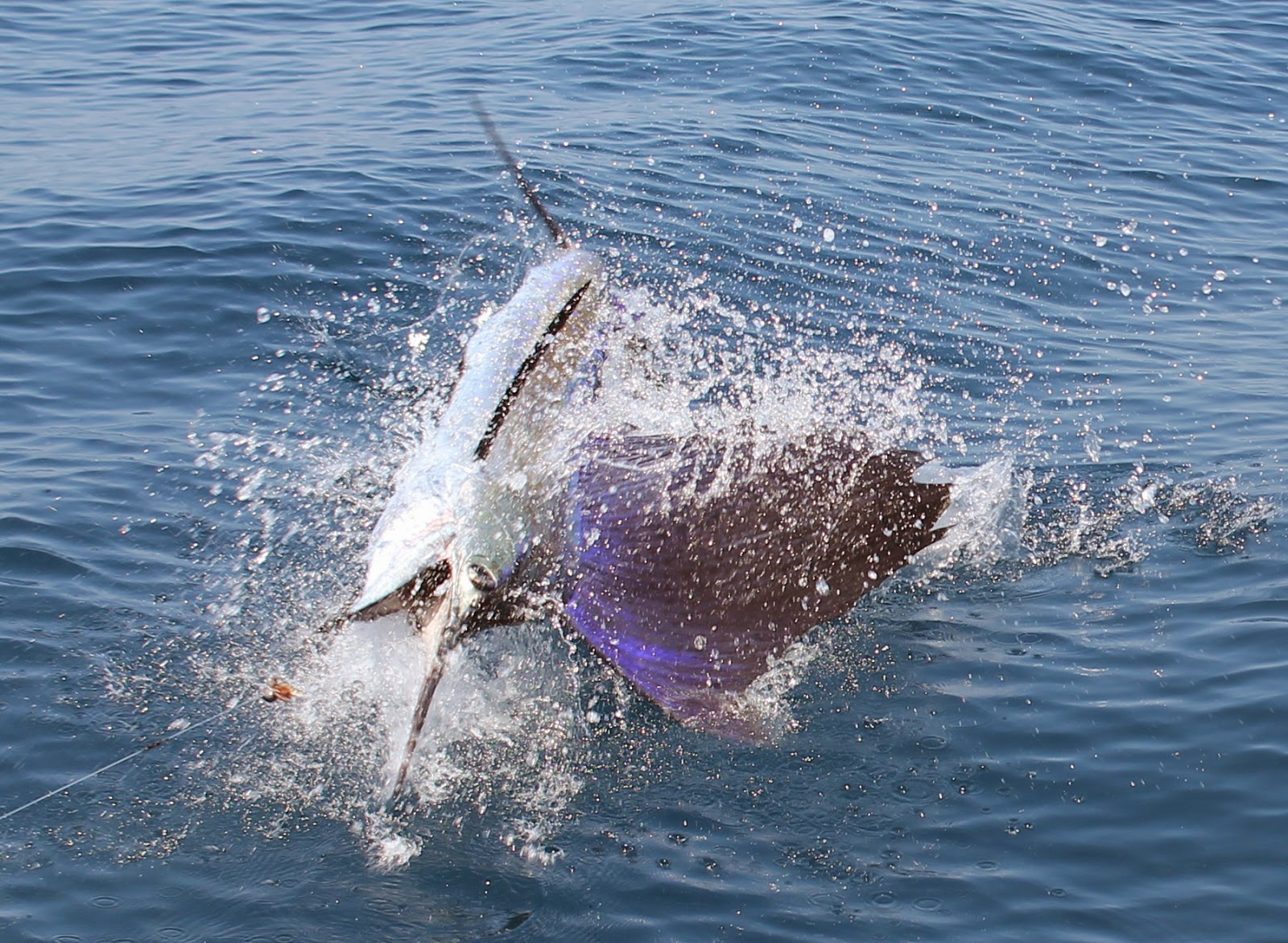 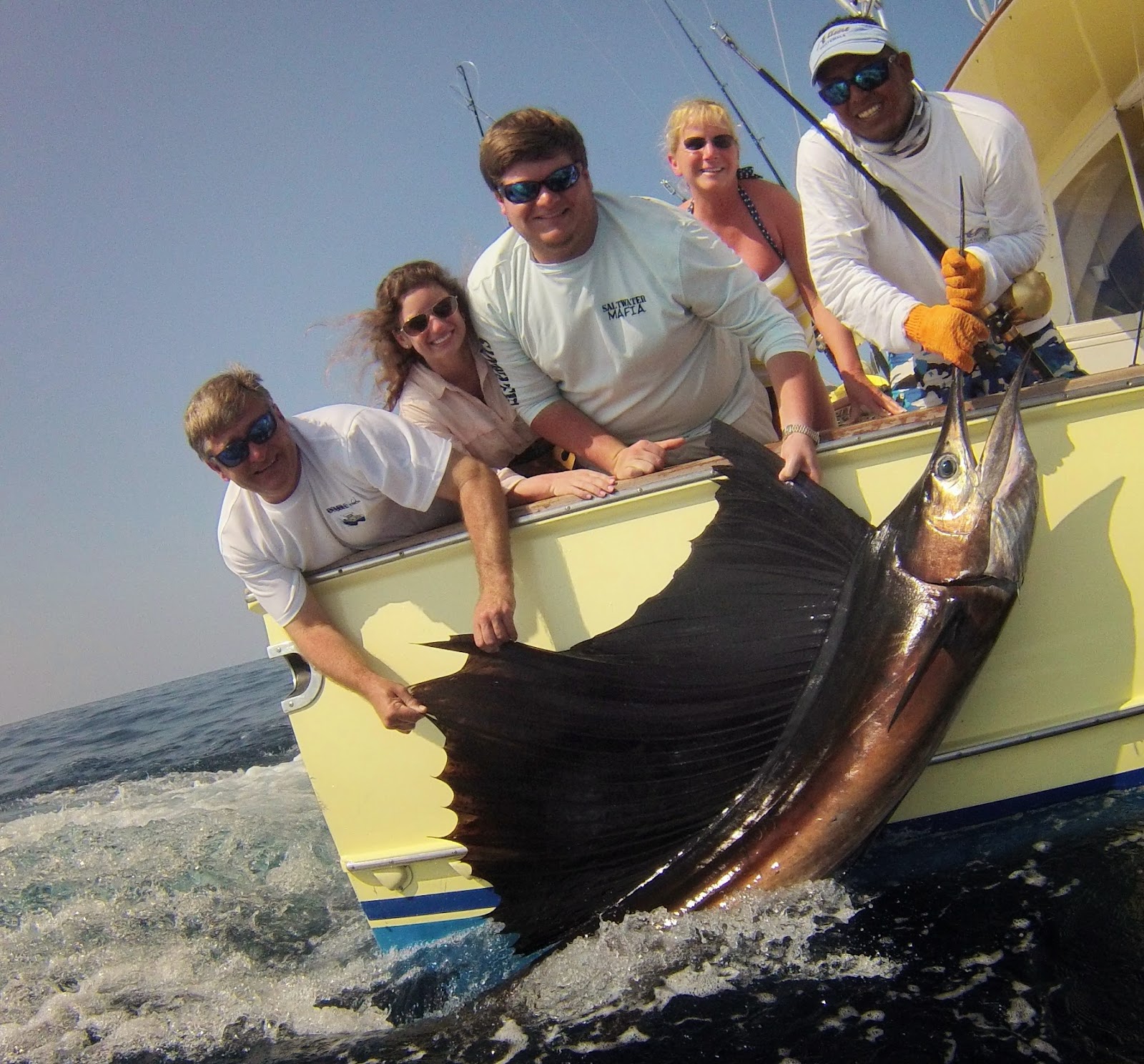 Kevin Harmon, Kayla Faraci, Mark Harmon and Laurey Harmon
March 12th-13th we welcomed for their first time to the Sailfish Oasis, though Kevin a Guatemalan regular, the Harmon family. Mixing it up between the fly and the bait we raised a lot of fish over the 2 days, though not the aggressive ones you want to see while on the fly. With 52 raised we released 20, the majority on the bait with few of them teasing in all the way. Kind of frustrating to see these fish come in half way only to fade off. The way it is sometimes, we did get some nice big tough sails in the fly as well as this one for Mark…Good times overall with plenty of fish in the spread and we finished off the trip with a nice flurry of (finally) aggressive fish…. 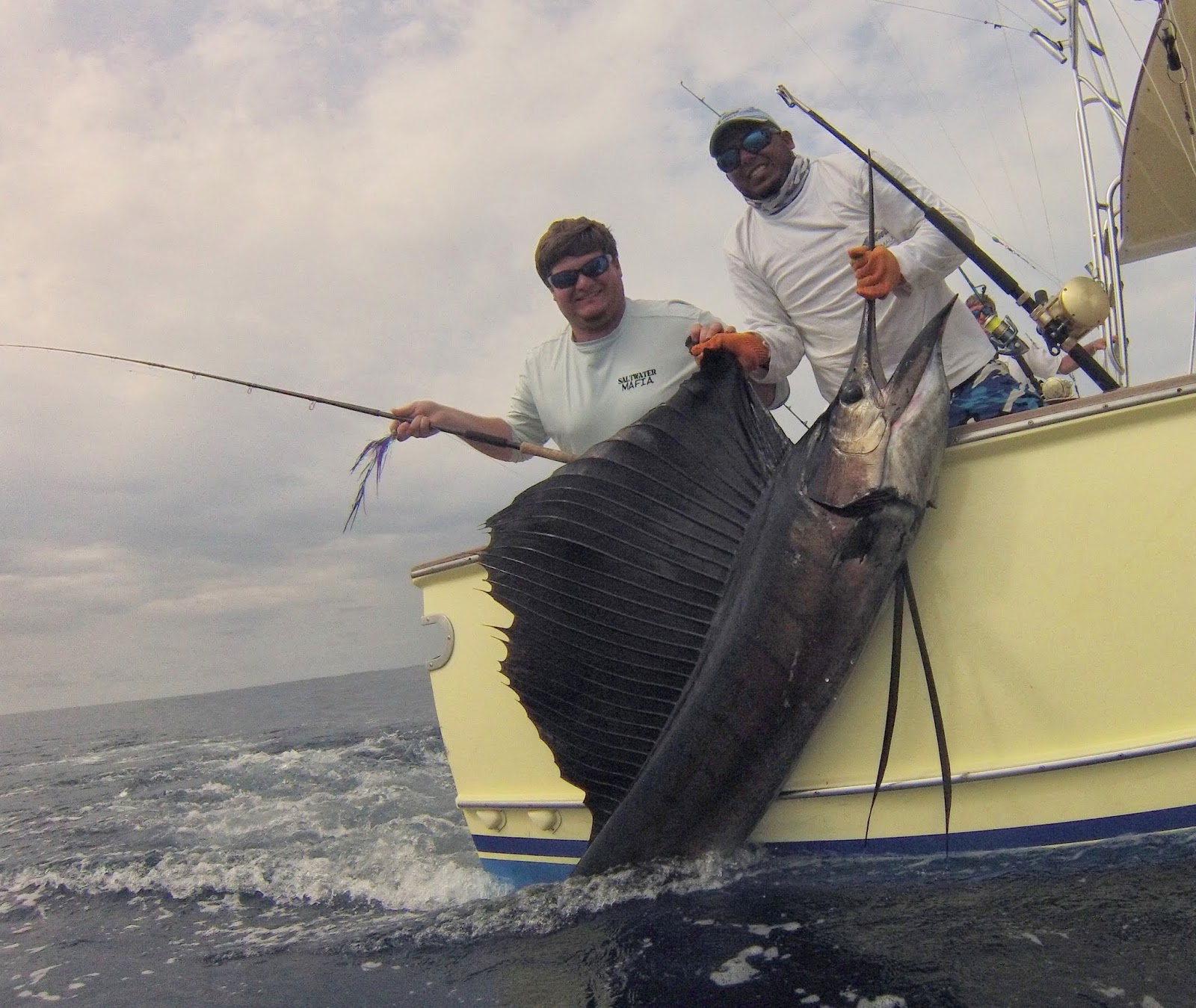 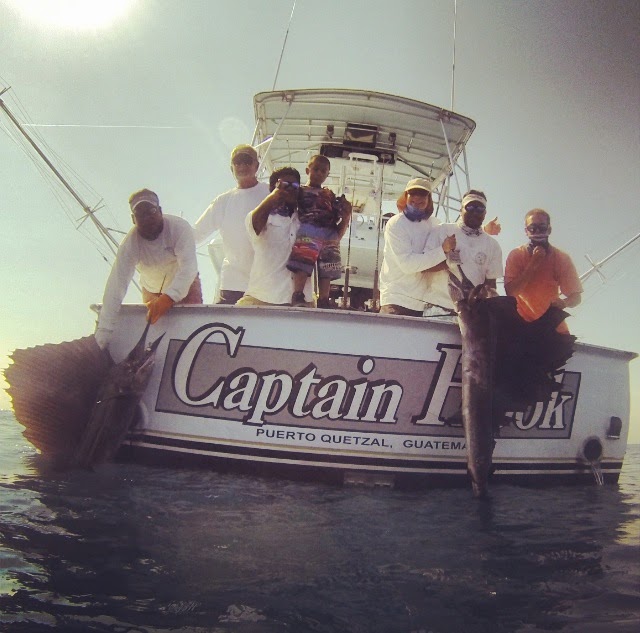 Bruce and Mark Neandross (and guest wireman Bryan Bairez) with Bill and Michael Buckland
March 13th-15th we welcomed father and son teams Bill and Michael Buckland along with Bruce and Mark Neandross from Palm Beach, Florida. Bill of Fisherman’s Centre fame and Bruce have been to Guatemala numerous times though this was their first visit to the Oasis fishing aboard Allure and Capt Hook. First day out on Allure the team were on it releasing 16 form 24 bites. The next day they transferred to Capt Hook and the fleet were back out there at the top of the western corner. The bite was dying and the boats that pounded it out all had about the same action with the guys releasing 8 from 12 bites. With that happening the majority of the boats went out front and to the eastern side of the pocket the following day and we found them pretty good. The guys finished off their trip with a great last day out releasing 22 sails for a total of 46 along with some mahi’s…
Liz & Kiwi,

We had a great trip. The accommodation’s , the staff, and the food were excellent- couldn’t have been better! We have stayed at all the other places, and this was the best. You have done a great job on the facility, very clean , and comfortable. The boats and crews were great , and the fishing was spectacular as usual.

We will surely recommend Sailfish Oasis, and see ya next year.
Thanks for the fun trip.
Bill Buckland 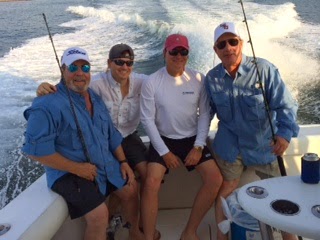 Stan Wiener, Ross and Robin Bunner and John Lindley
March 14th-16th we welcomed back John Lindley with the 2 boat group of Billy Bergeron, Robin Brunner,
Robert Brunner, Will Brunner, Ross Brunner, Tom Preston, Mike Mitchell, Stan Wiener, and Chief Tauzin who fished the first 2 days. As the above report, the first day out for the crew was tough with 11 releases for the first day between the both boats. On Allure II we pushed down the western edge looking and found little. Next day out to the east we got into them and had a helluva day on both boats with 45 releases, it slowed a little the last day out though plenty of mahi’s out there to mix it up and 32 releases between Allure and Makaira who fished the last day with the guys. Good times on the water and as ever with these guys, a large time down at the lodge…!!! 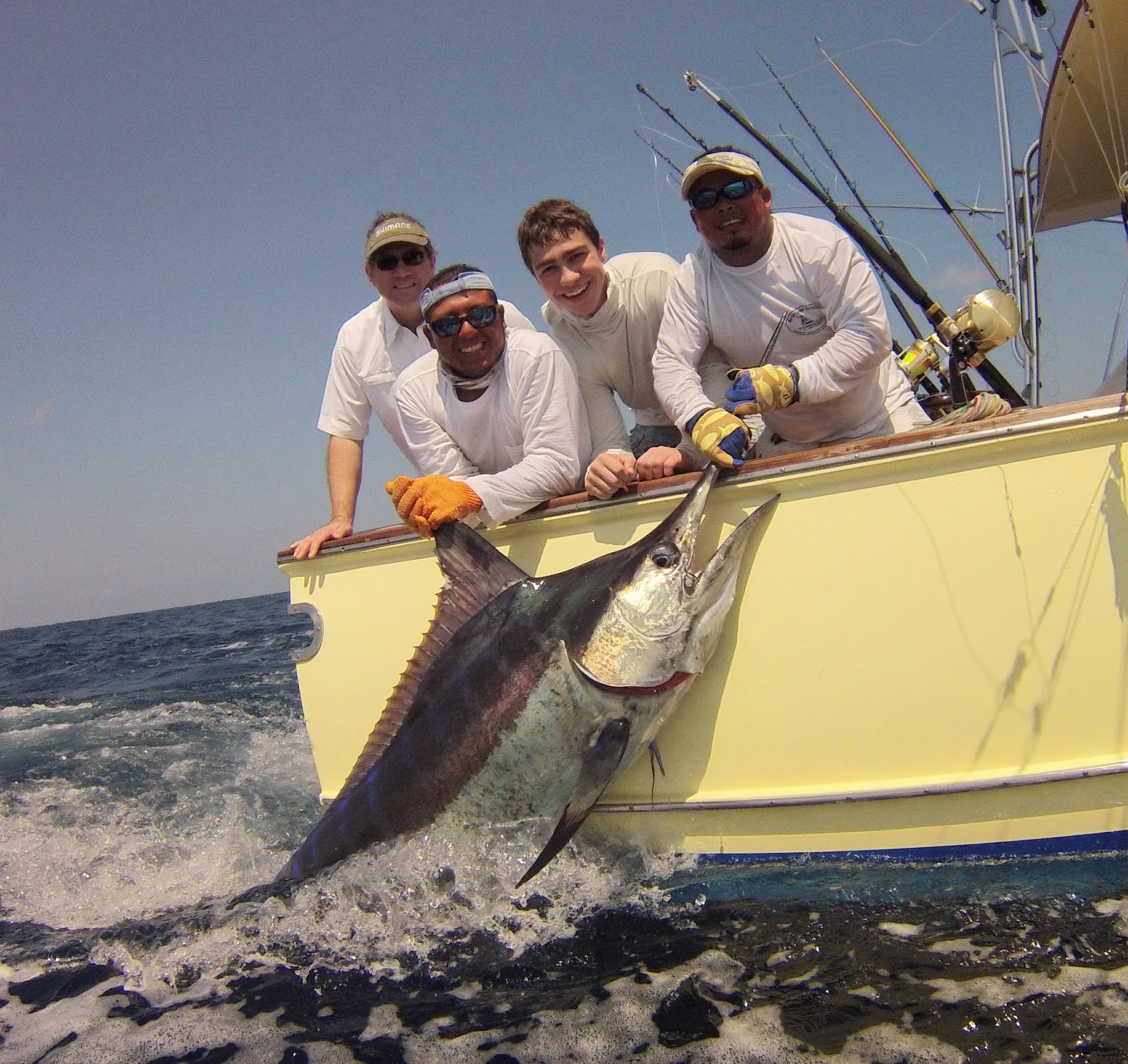 John and Graham Wallace
March 16th-18th we welcomed first timers to Guatemala and more spring Breakers, father and son team John and Graham Wallace from Houston, Texas. First day out we got into some steady sailfish action with some single fish coming in on the teasers, it slowed a little then we got an incredible going away bite on the short teaser from a blue marlin pushing the 200lb mark. The mackerel was quickly pitched and another very aggressive bite from the small blue, lucky not to backlash from another going away bite, 17yr old Graham was soon tight to a very active fish… 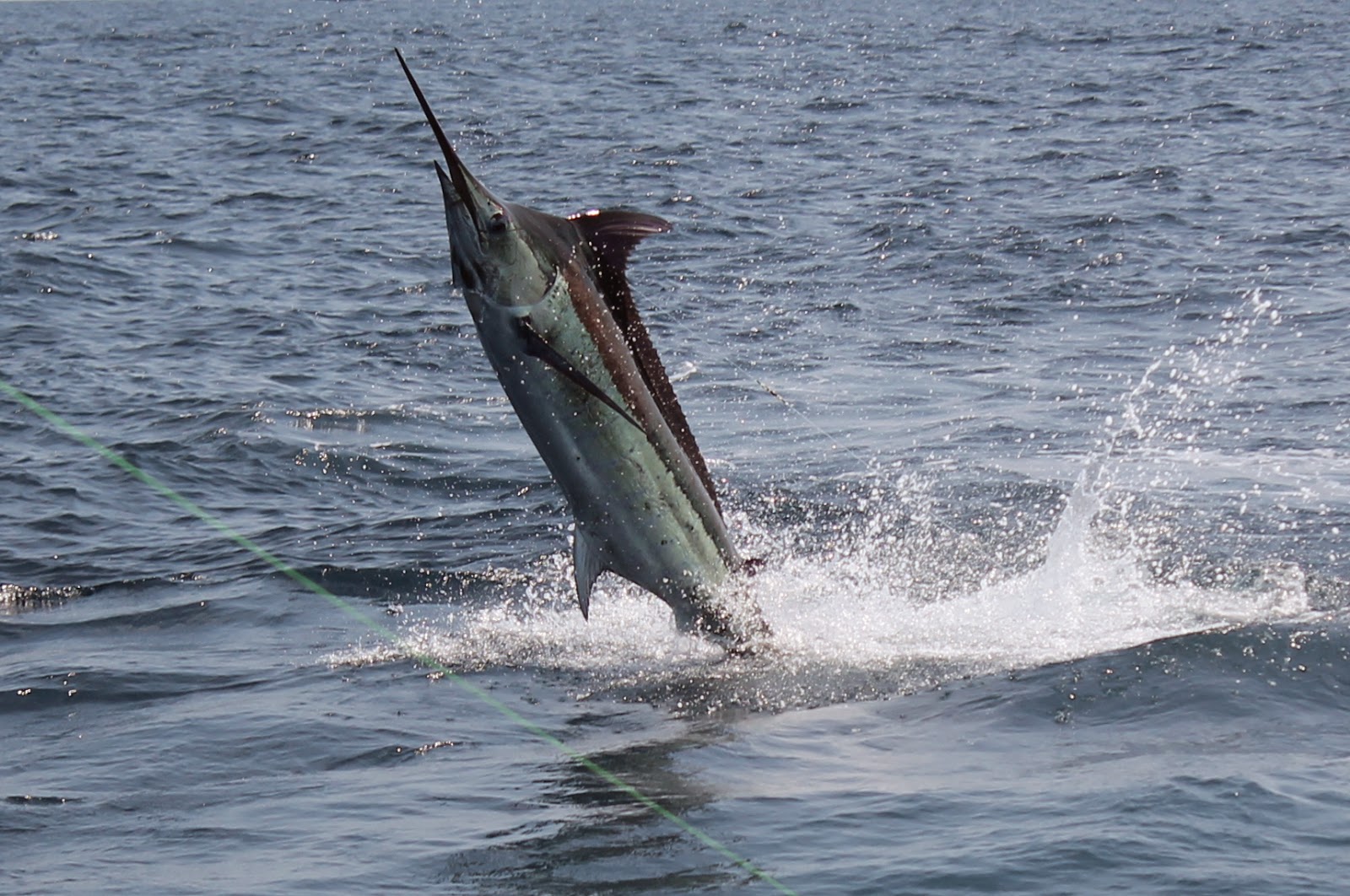 We got the release after a bit of a work out for Graham and were back into the sails, 13 releases from 22 bites today. The next 2 days the crew moved to Allure and had good steady action on the sails and wanting to mix it up spent some time looking for, and finding, mahi’s. Live baiting produced a couple of good 30lb+ fish and plenty of schoolies. 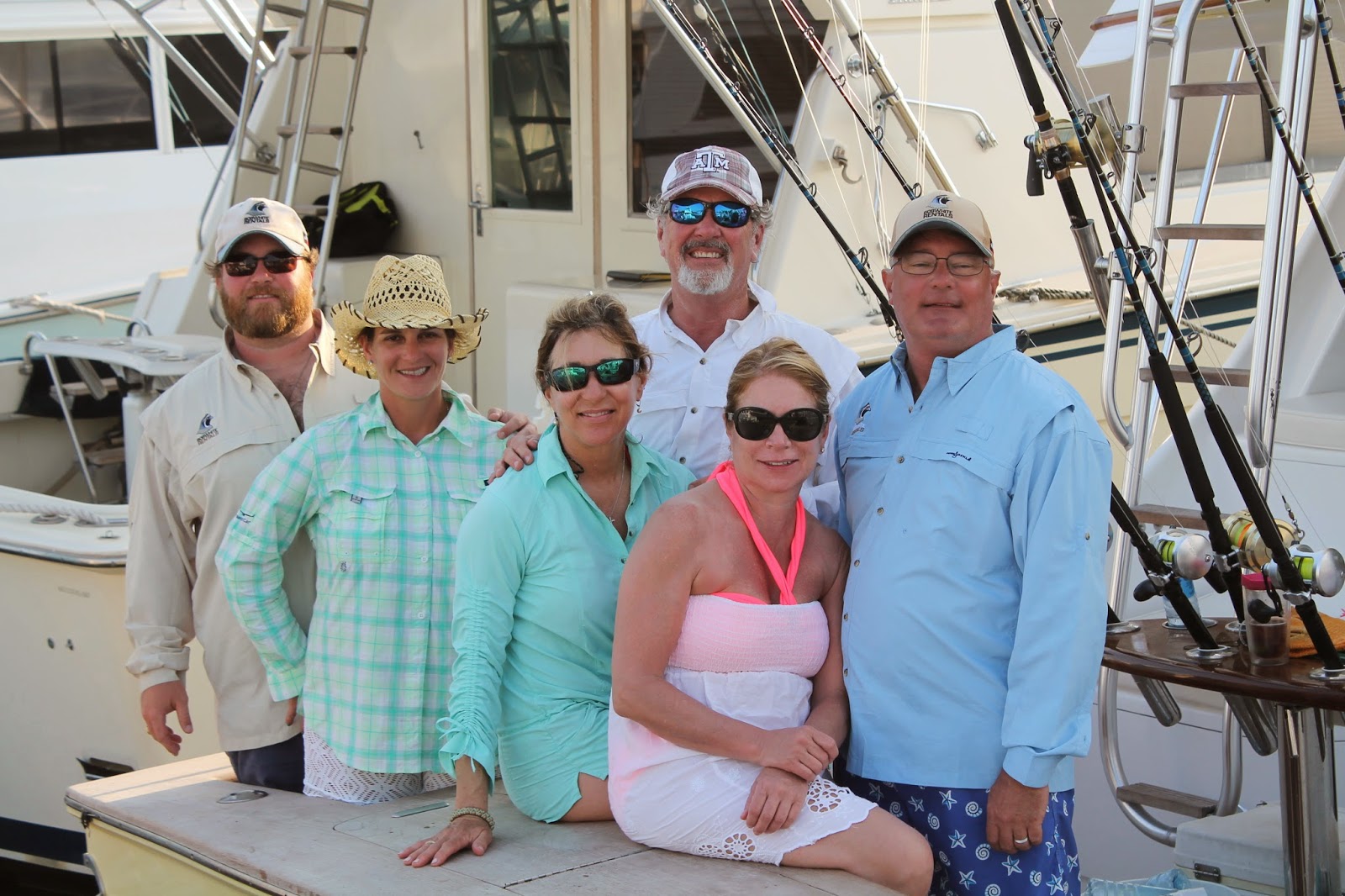 Chris JR & Michelle Hansen, Cindy Friemel & Chris SR Hansen with Myra & Clayton Johnson
March 17th-18th we welcomed Clayton back into town this time with wife Myra and the above Hansen Clan. All good keen fisho’s they were wanting to get the ‘bite’ and we got them into some good teaser fish to learn with. Over the 2 days we released 27 sails from 39 bites with 46 coming into the spread. By the end of the trip they were on to it with the bait and switch picking it up nicely. The last afternoon out we had some great teaser bites with 3 triple headers on the teasers in the last hour and half. Keeps you on your toes that sort of activity!!
Good to see this group down here and hope to see them back again soon.. 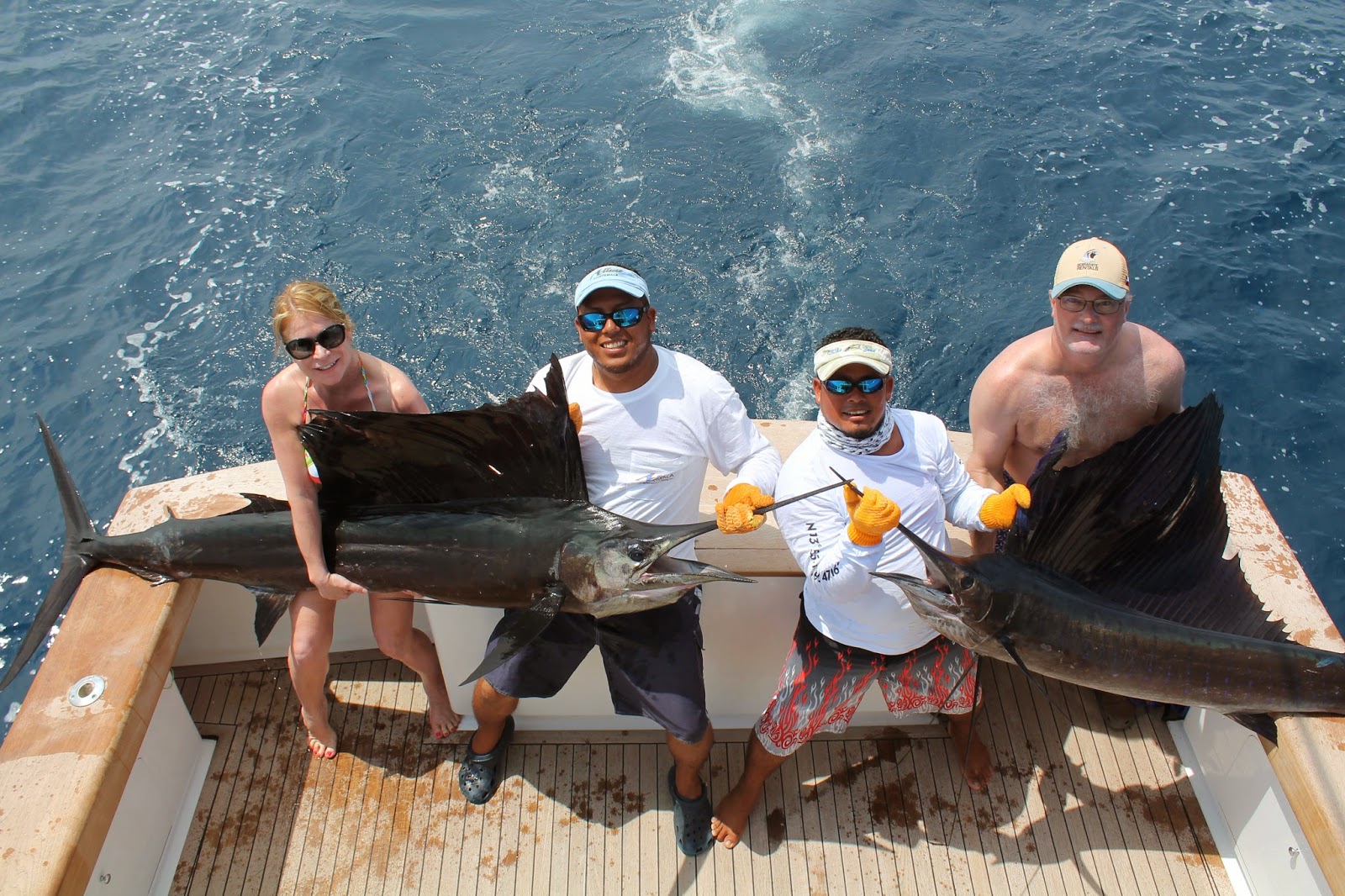 Myra and Clayton with a double header… 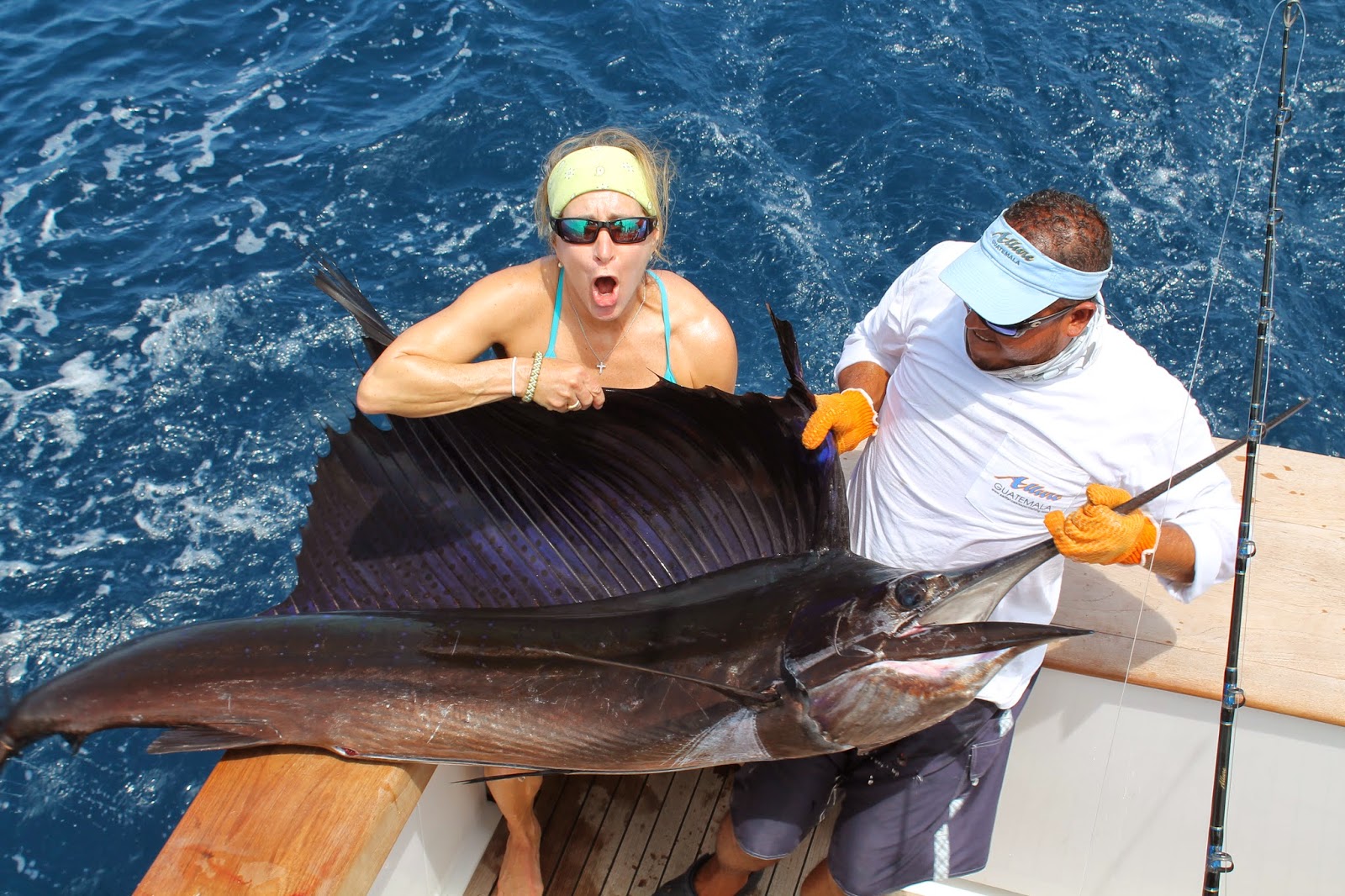 Cindy with a large sailfish….
All in all nothing but excellent fishing here in Guatemala. We are looking to book up May now and with the fishing the way it has been, it looks likely to continue. The marlin bite will surely heat up, the tunas will turn up in force and we’ll be seeing plenty more mahi’s out there. Normally as the season moves on we get plenty of small schoolies out there and the marlin hot on their tails. Too good to miss!! Get in touch with us here to get into it….