MAY THROUGH JUNE FISH REPORT 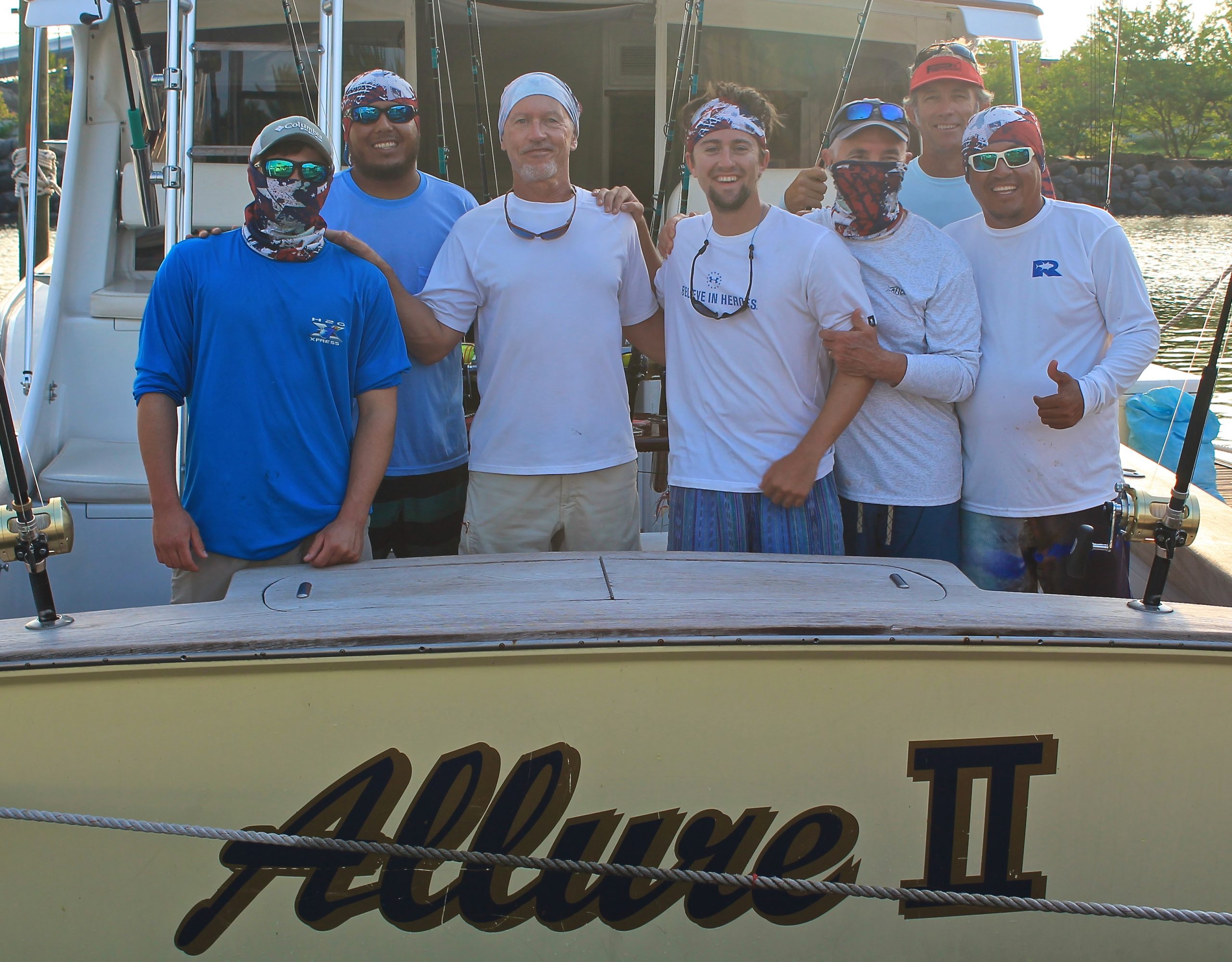 May 15-17 it was great to meet and befriend the above group in from Houston, Texas…..Jay Stuckey brought down grandson’s Matt and Brian DuPont and good friend David McCaleb for 3 days on the water here in Guatemala. Matt and David were rookies at the bait ‘n switch off the teasers though by day 3 were at it like pro’s, always good to see!! Over the 3 days they raised 38 sailfish releasing 19 from 33 bites….. 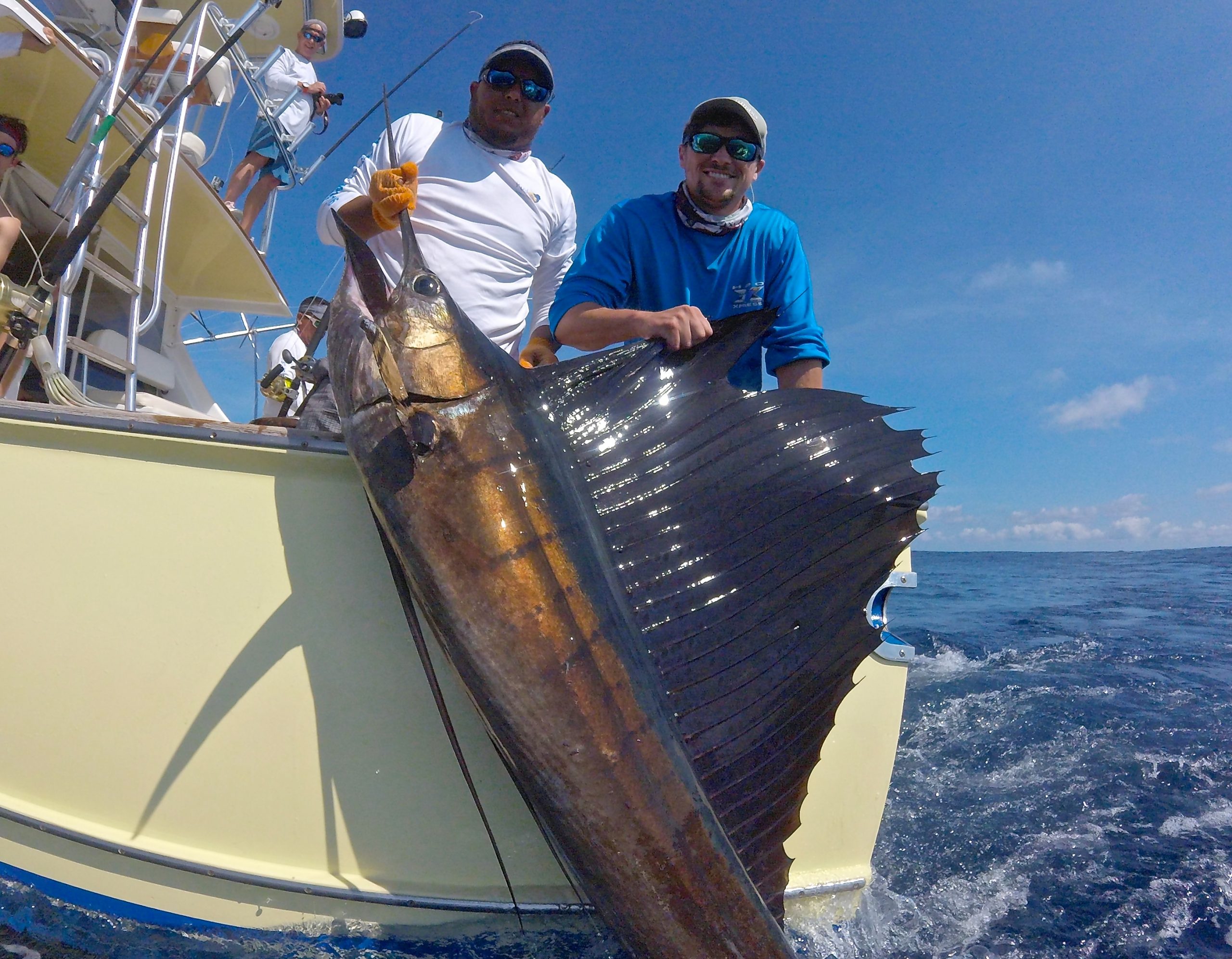 Matt with a big sail…. 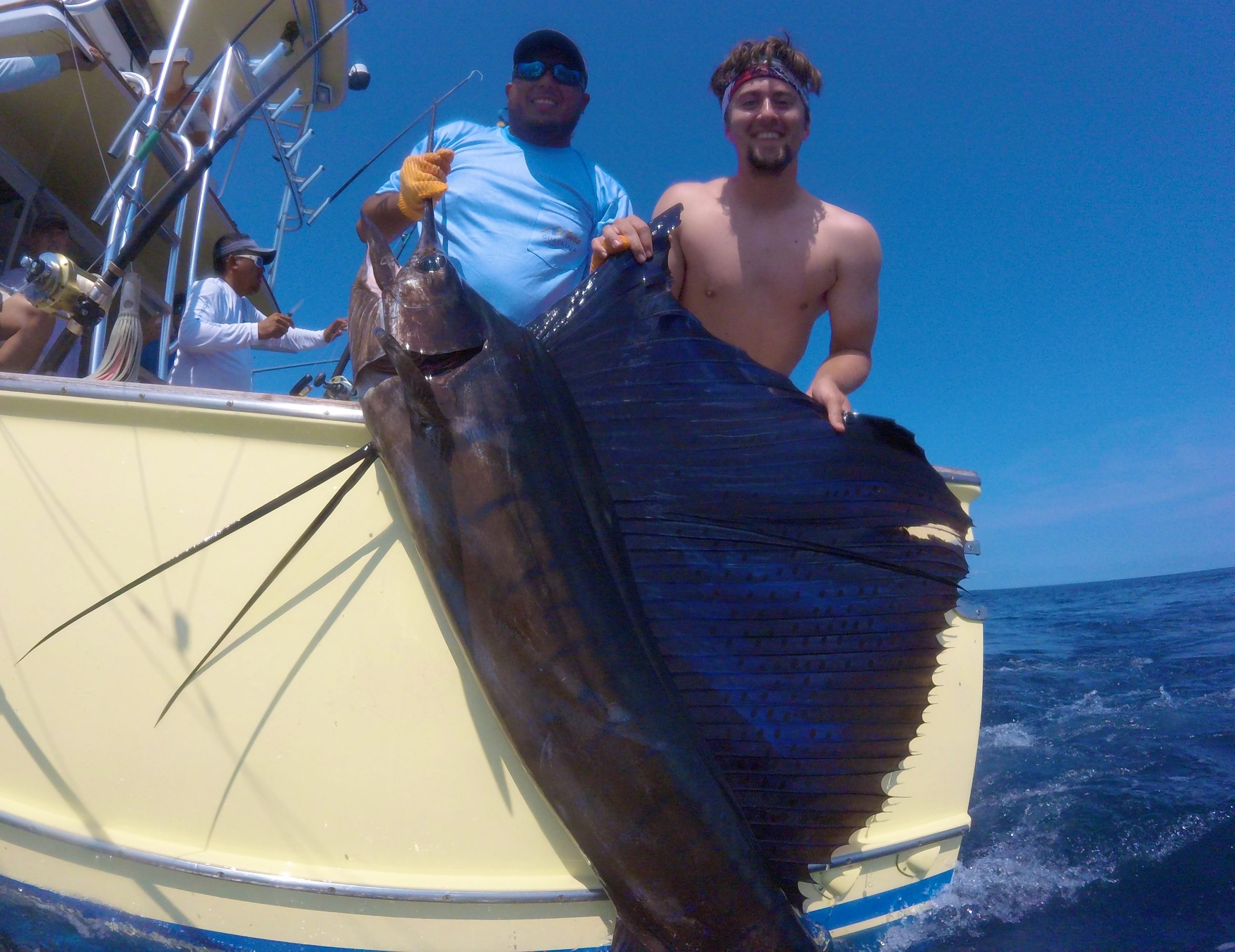 And Brian with his……

We also raised 2 marlin, one of them a nice black for Jay that came up hot on the bridge teaser and switched to the pitched mackerel with an awesome bite right there behind the 1st wave…. 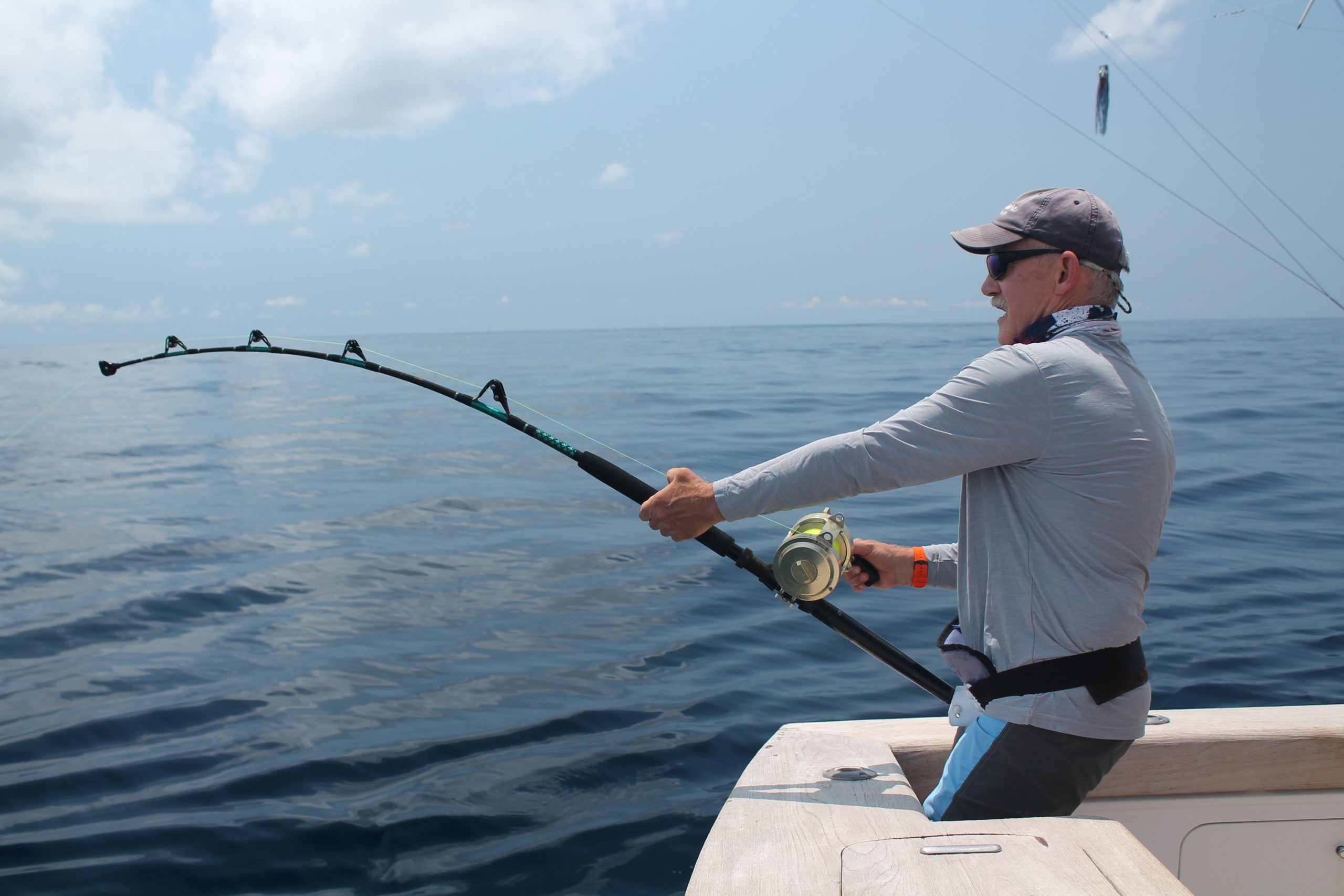 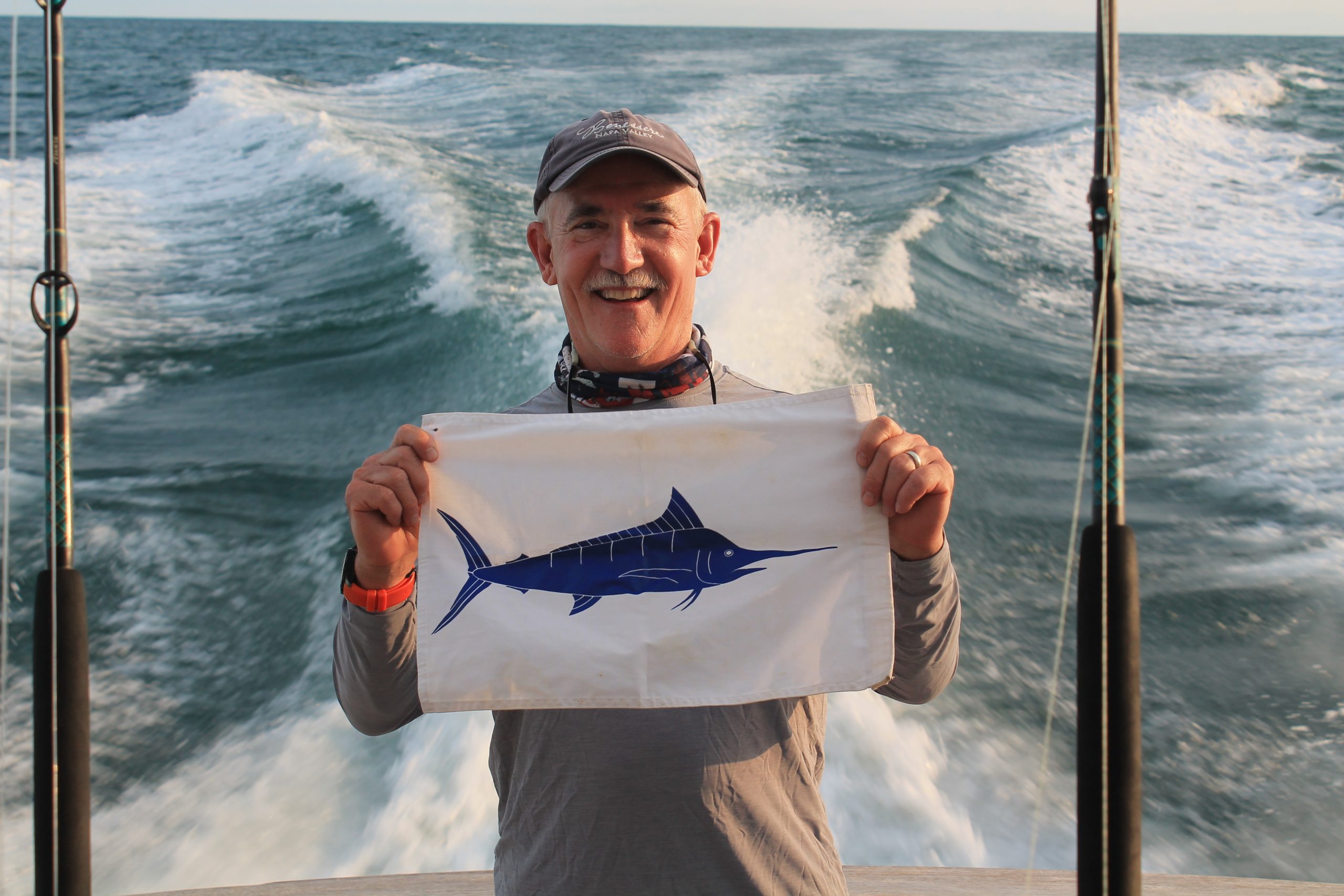 One tough customer that he got the tag and release on after 1hr 20mins.

The other was a blue that left a hole on the teaser though did not come in. On top of that we had some pretty incredible mahi fishing the last 2 days out there…check out the black marlin vid: 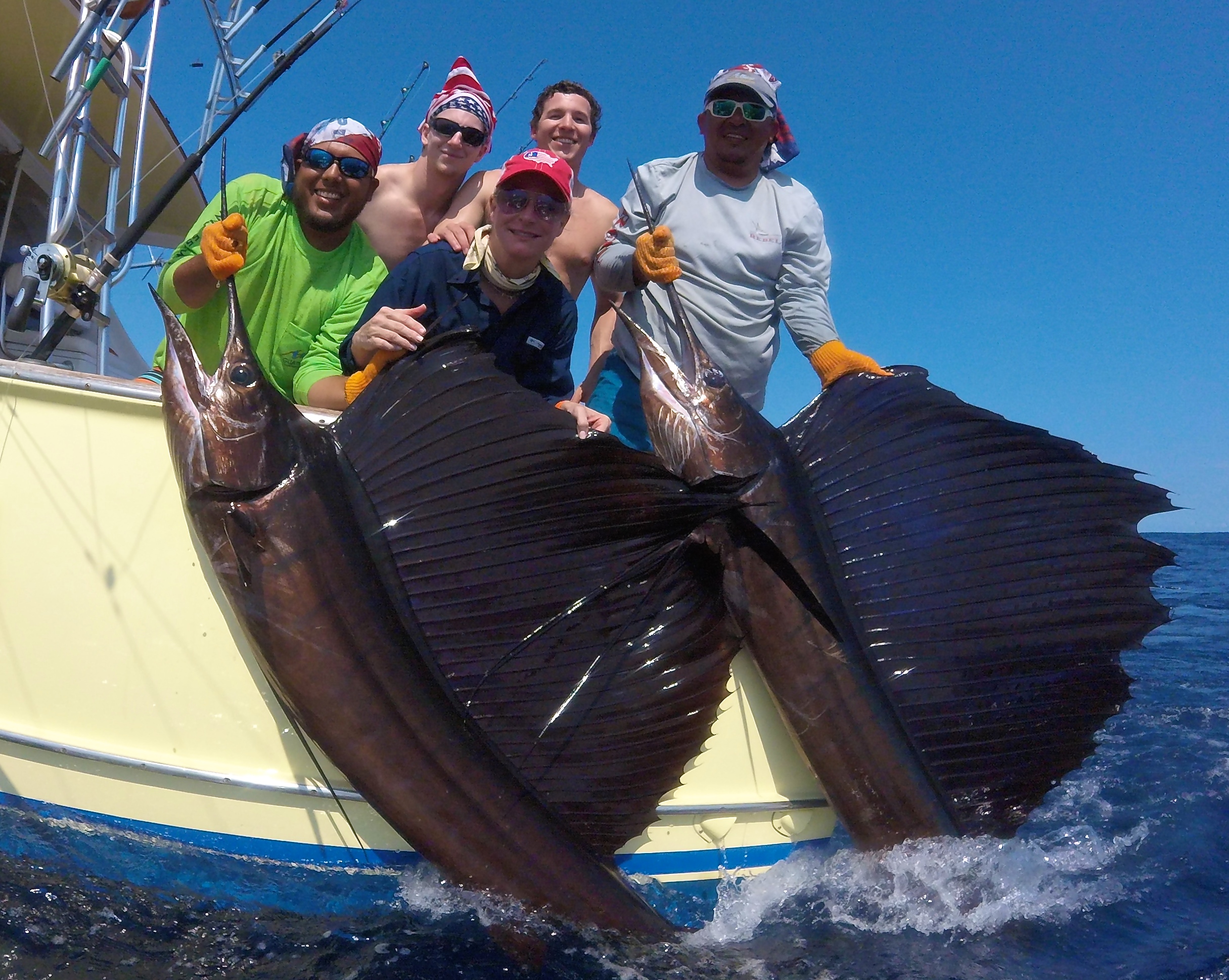 May 18-19 Great to meet the Henningsen Crew, mom Stacey who brought down son’s Reece and Blake for quality family time at the Lodge and on Allure II. Over their 2 days on the water they raised 27 sailfish releasing 16 from 23 bites….. 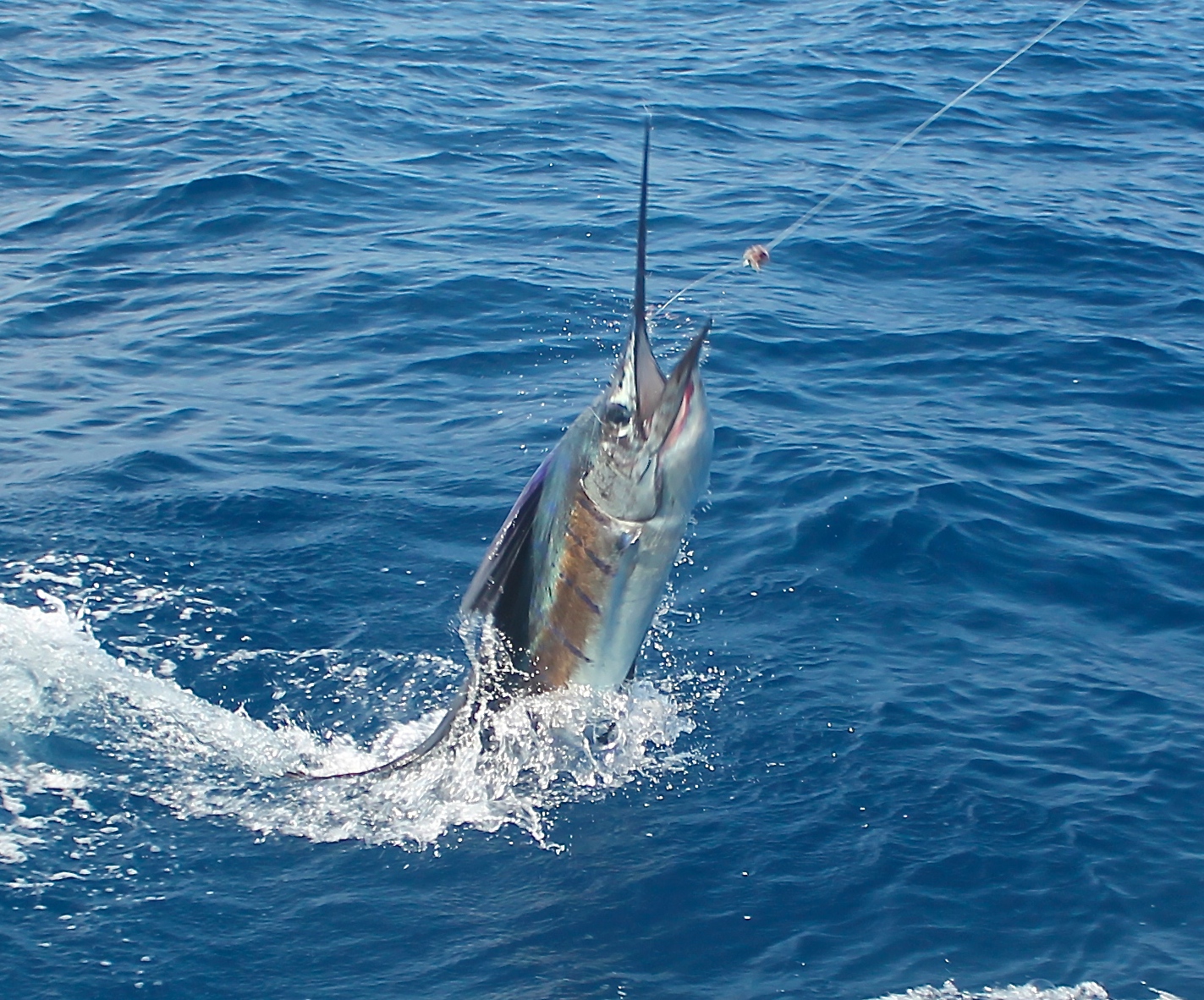 Also 4 blue marlin of which one did bite and Stacey did an awesome job on the 30lb test…. 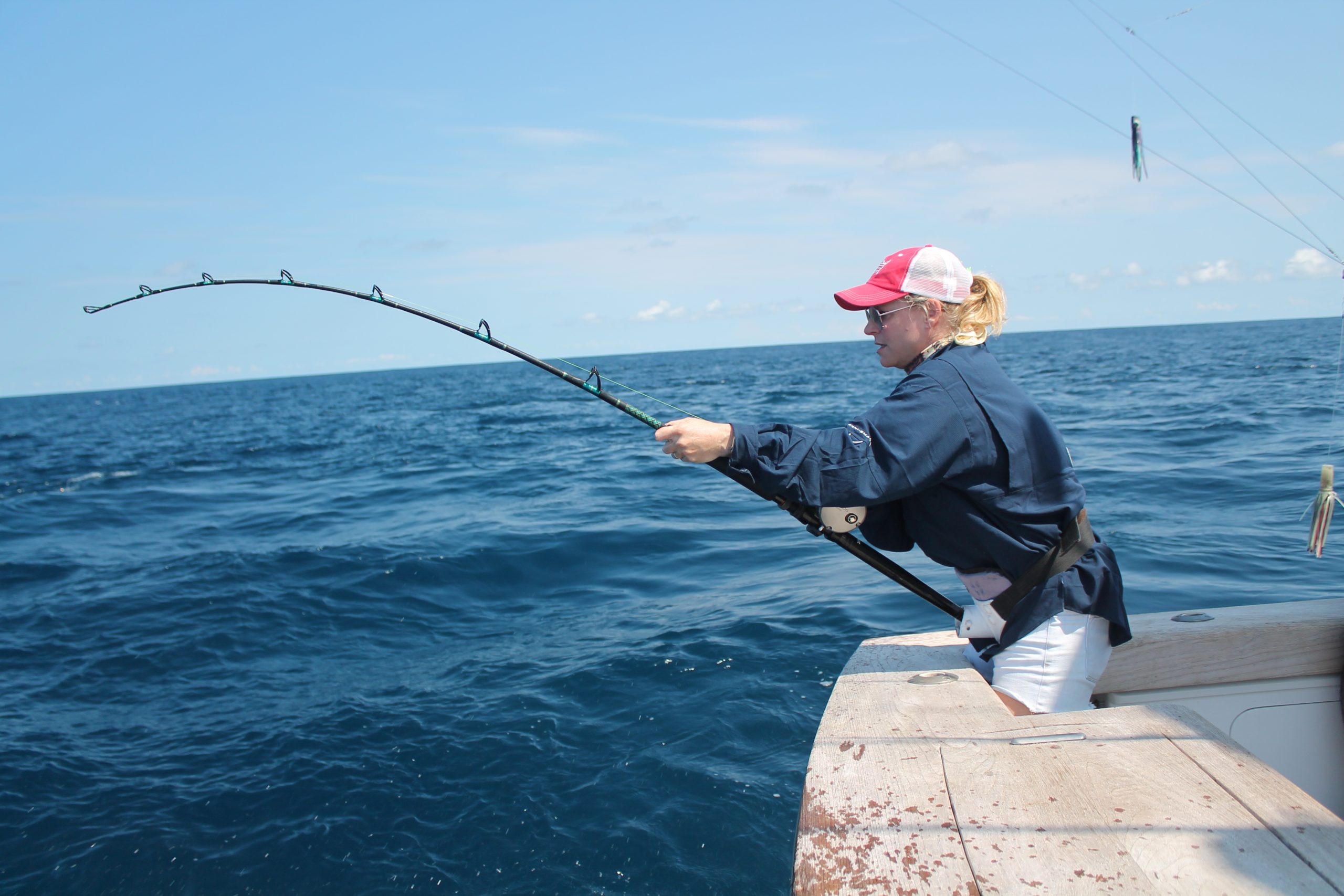 Getting the release on this blue marlin….. 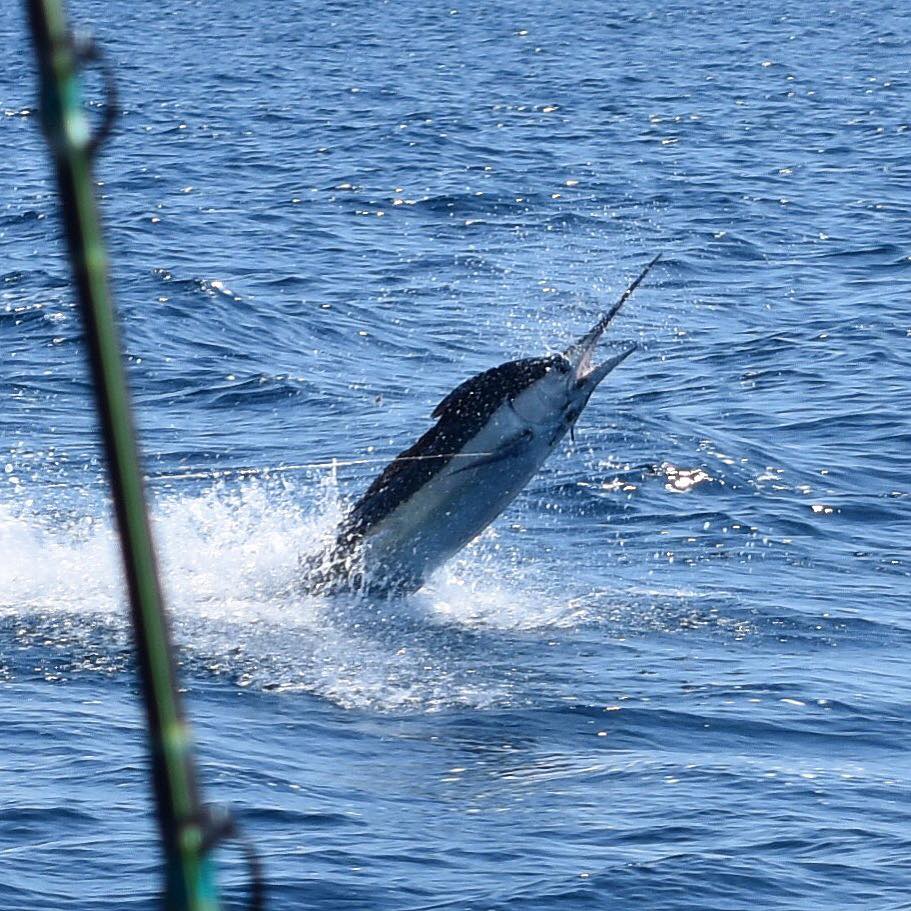 We also got into a bunch of yellowfin tunas and a mahi for lunch on their last day out. Reece and Blake also finished their trip both getting the hang of the circle hook techniques. Good times! 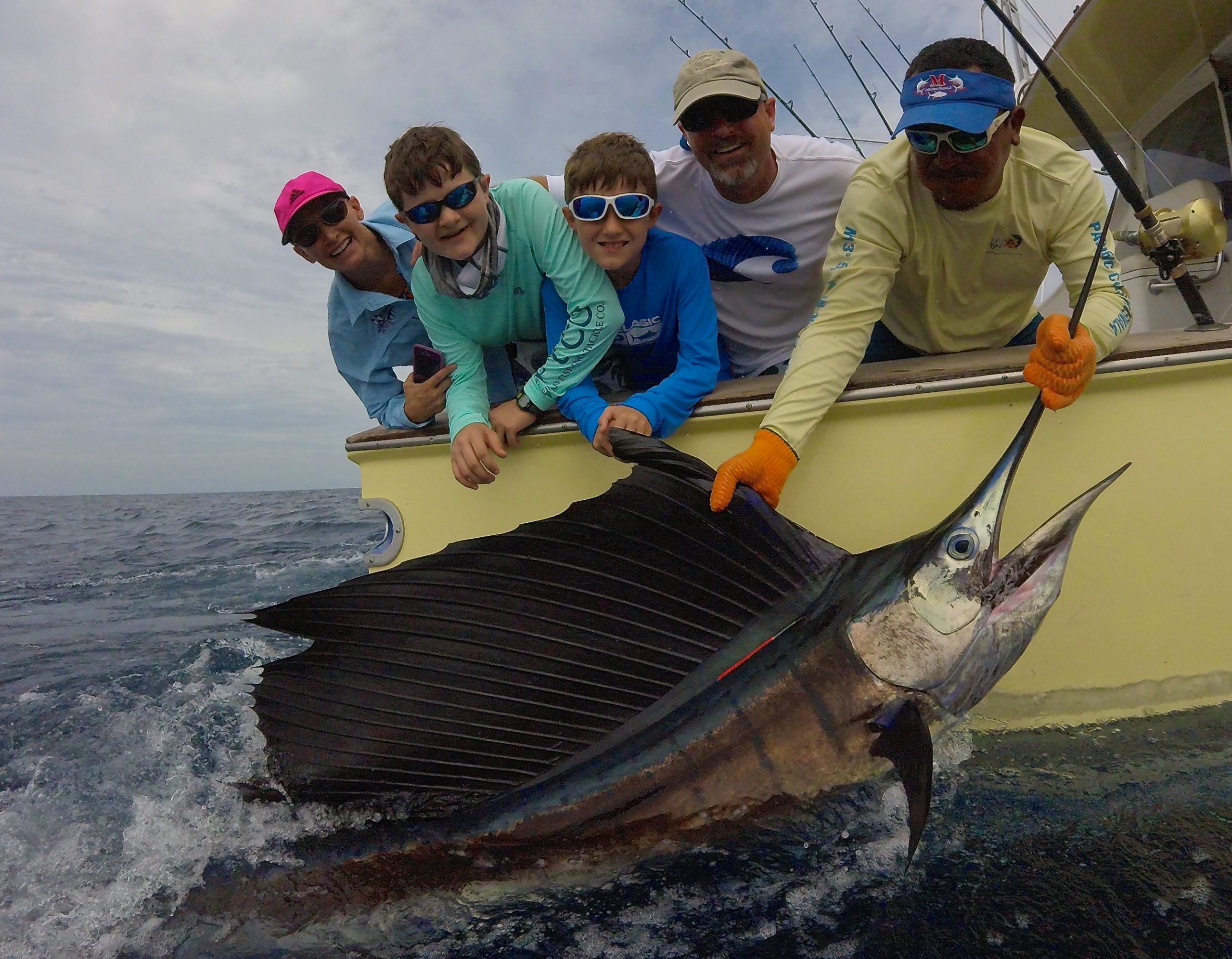 May 28-29, very cool to fish with Colin, Liette and their boys Ethan 13 and 11 year old Caleb once again. We tried hard, covering a lot of ground looking for ‘the bite’ though it was tough out there. Over the 2 days we raised 11 sails of which 9 did bite and we managed to release 3, some tough bites and a little bad luck… 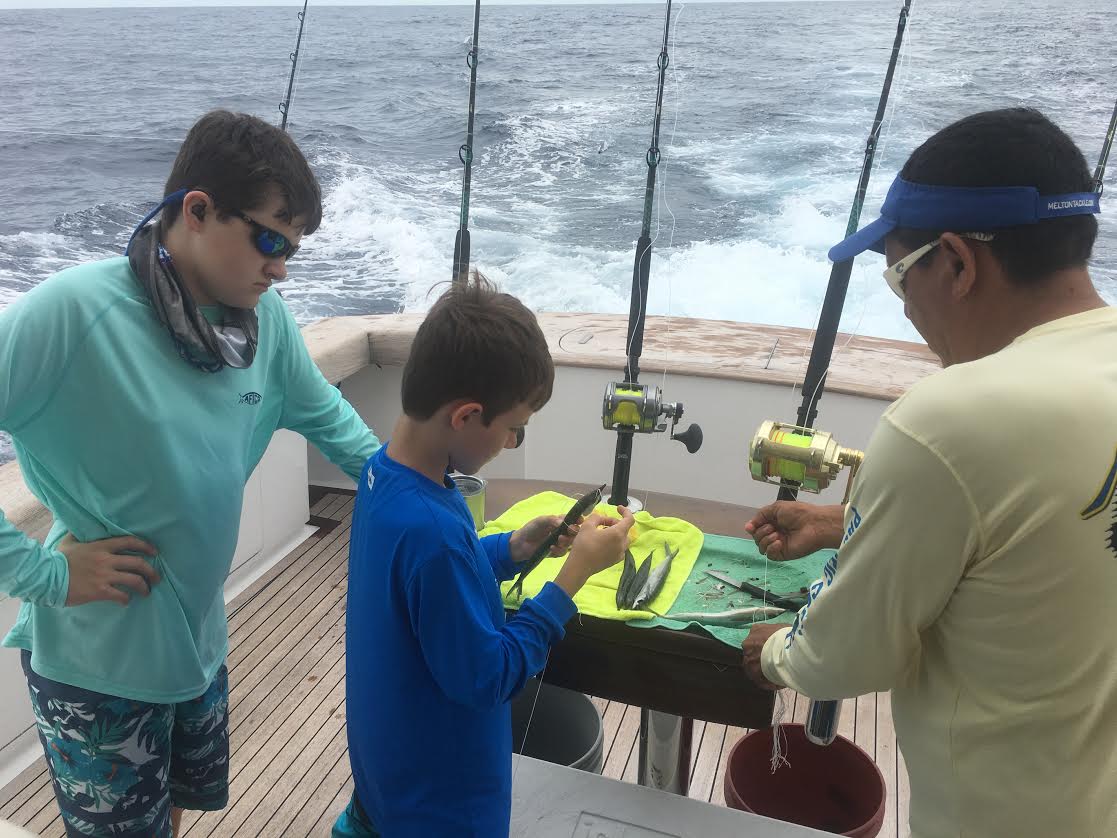 The boys learning to rig baits from mate, Julio 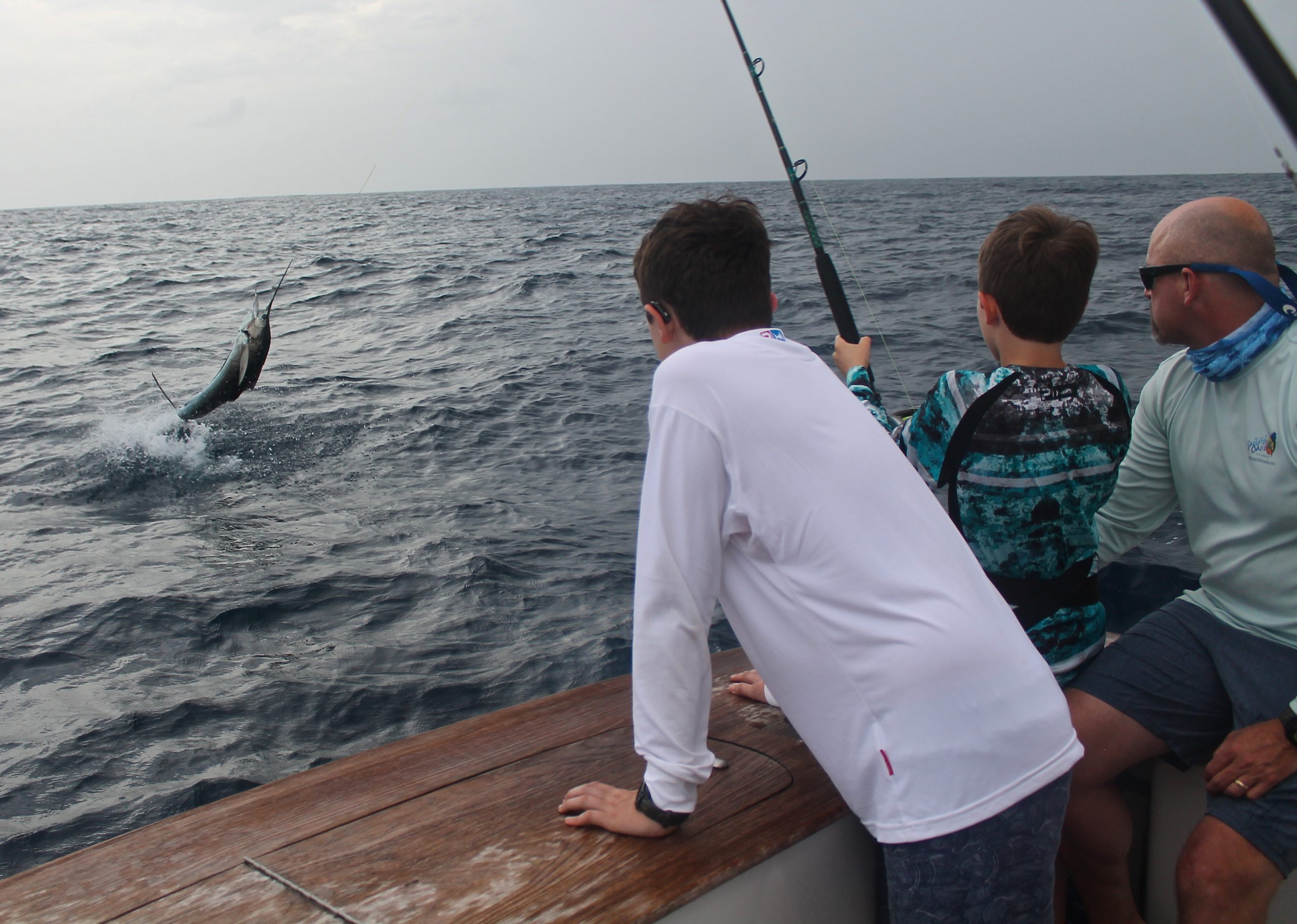 We also raised 3 blue marlin, 2 of which came up pushing water behind the pitched mackerel……though neither did commit and eat! Plenty of yellowfin tunas and a mahi in the boat as well. A great time with Colin and his family as always. They finished off their trip with a couple of nights at the wonderful Casa Santa Domingo in the Spanish Colonial town of Antigua for an overall awesome family vacation. 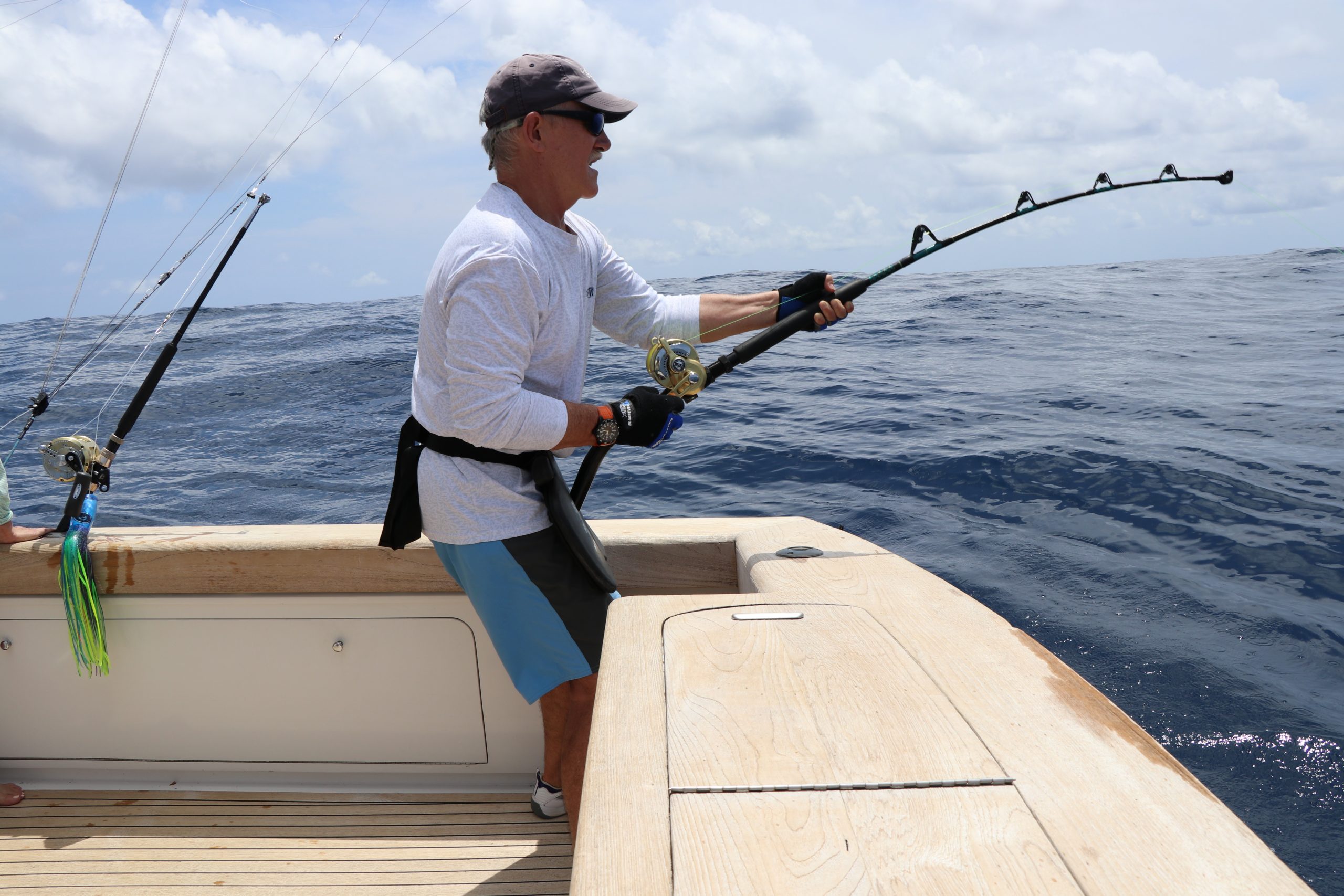 We took the ALLURE II over the boarder into Mexico for a few days setting up camp there with staff from the Lodge taking care of the ground duties. We managed to talk Jay, who’s always keen on a new destination off the radar, into coming down and checking out the fishing in Sth Mexico for a couple of days with his wife Ira after promises of large blue marlin…..Fishing June 2-3 we went west the first day finding blue water down the edge and the first fish of the day late in the morning was  400+lb blue marlin that teased in red hot on the Bonze Lures BTK. Jay got the mackerel back and did a great job managing a clean drop back after a super aggressive bite right off the transom…. 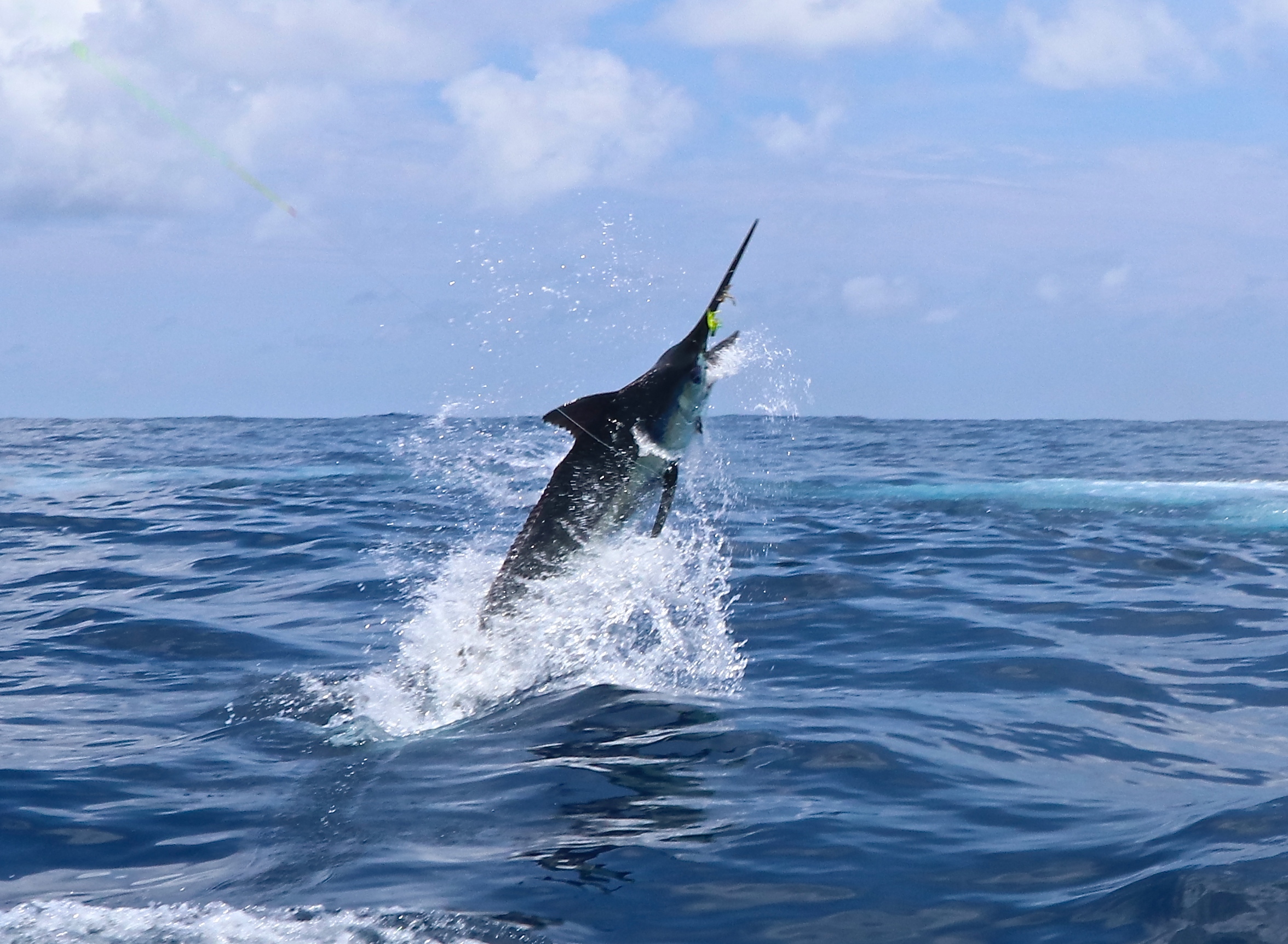 And got the release after a tough 40min on the 50lb stand-up.

A bit slow from there on in, the water greened up a bit and we raised 7 sails releasing 1 from 2 bites and boating 2 yellowfin tunas for the rest of their time with us. Good times with good people….

Day 3 was a crew day checking out way down to the east of the break wall, we found blue water pushing in hard from the SE and had a fun morning loading up on yellowfin tunas which were biting hard on lures and stick baits. The tunas were put on ice, cleaned and at the end of the day donated to Mission Mexico, an orphanage in Tapachula.

For the afternoon we scouted out the area looking for billfish…. 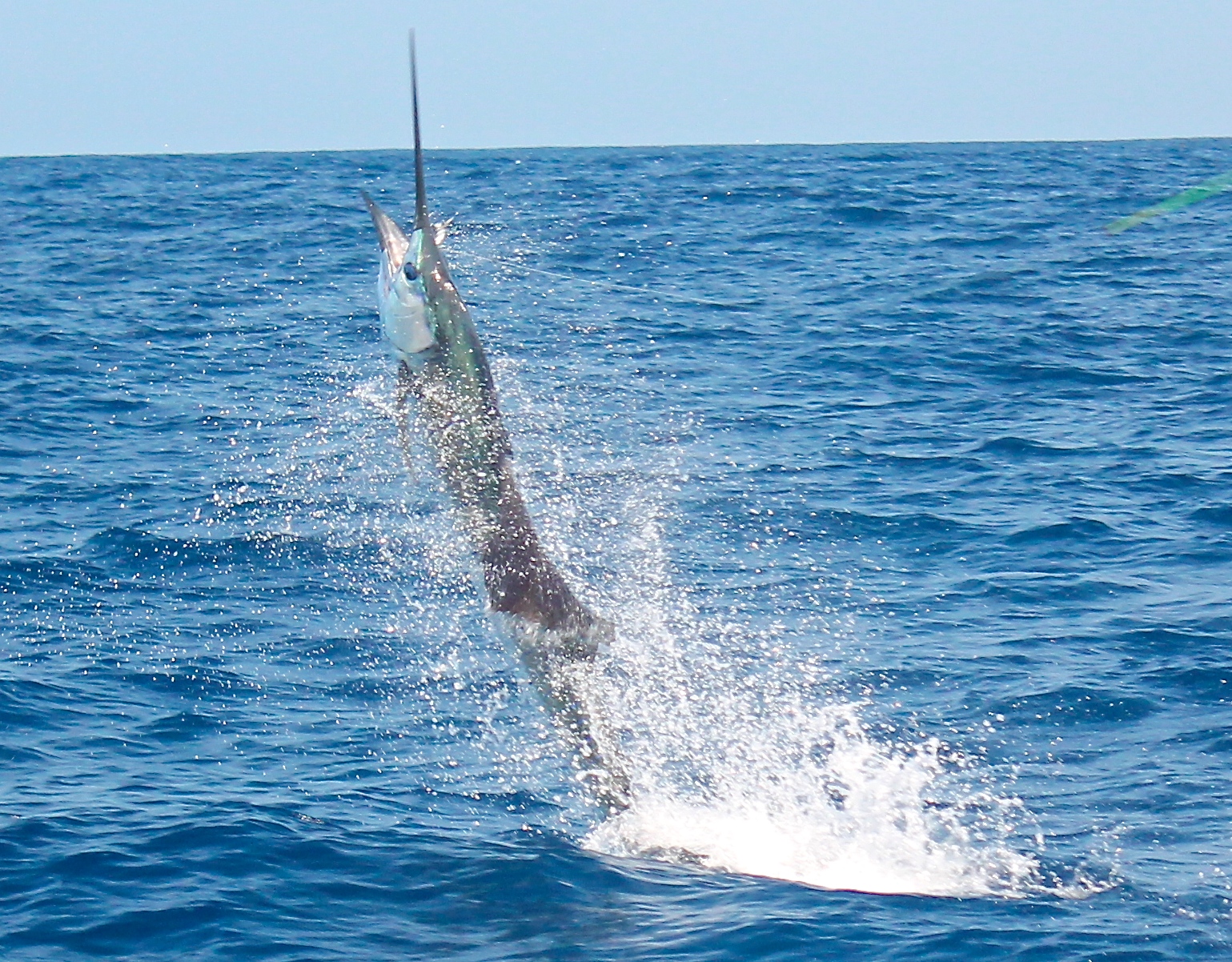 And near the end of the day raising 2 blue marlin one of which we got the bite from, a large fish of well over 500lb that jumped once and stayed down and dirty for the rest of the fight…. 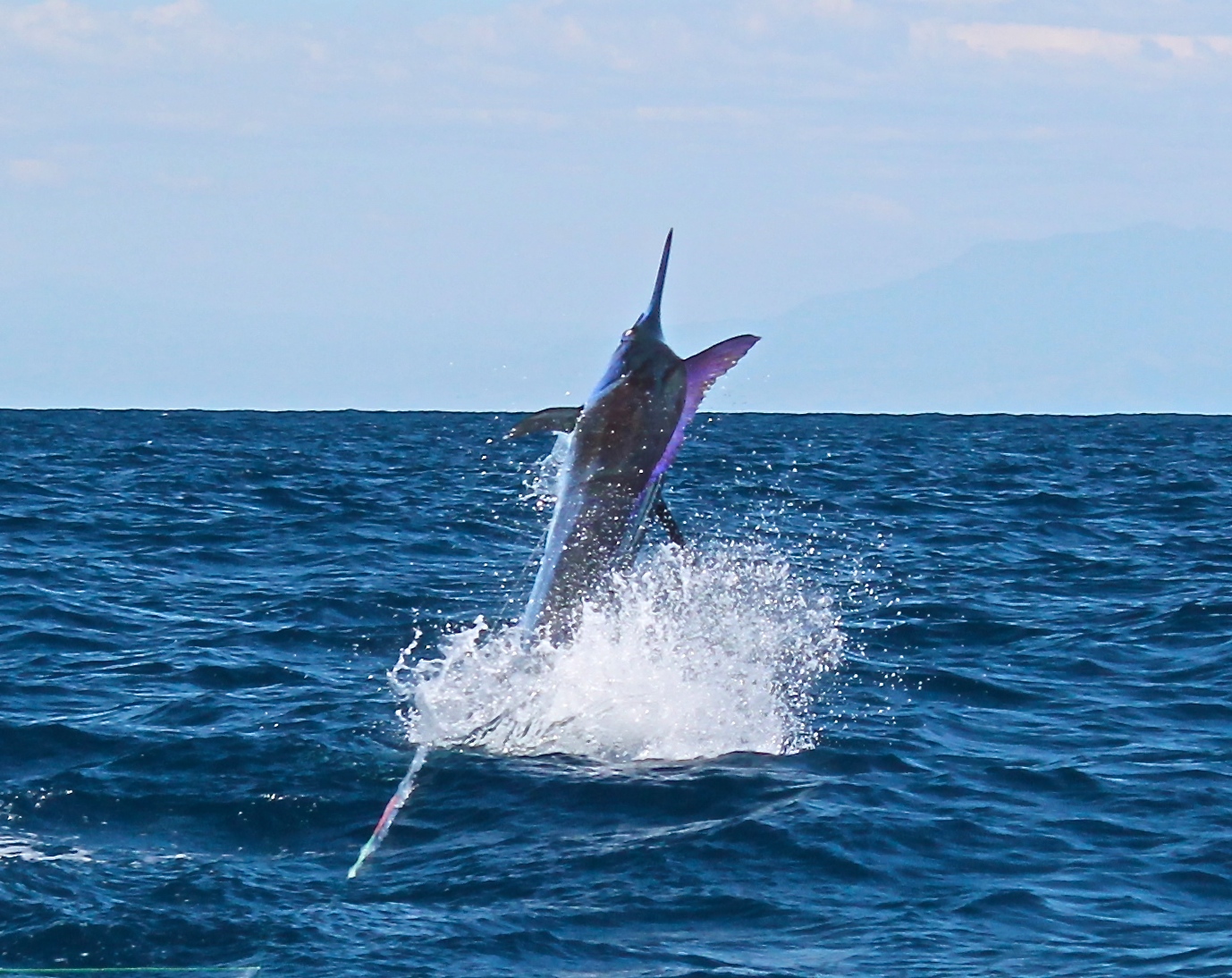 My bro Marc got the release on this one, another fish that came up hot on the Bonze Lures BTK, liking the new teasers we’re pulling from Bonze International!!

AMANDA THOMPSON ON THE FLY…. 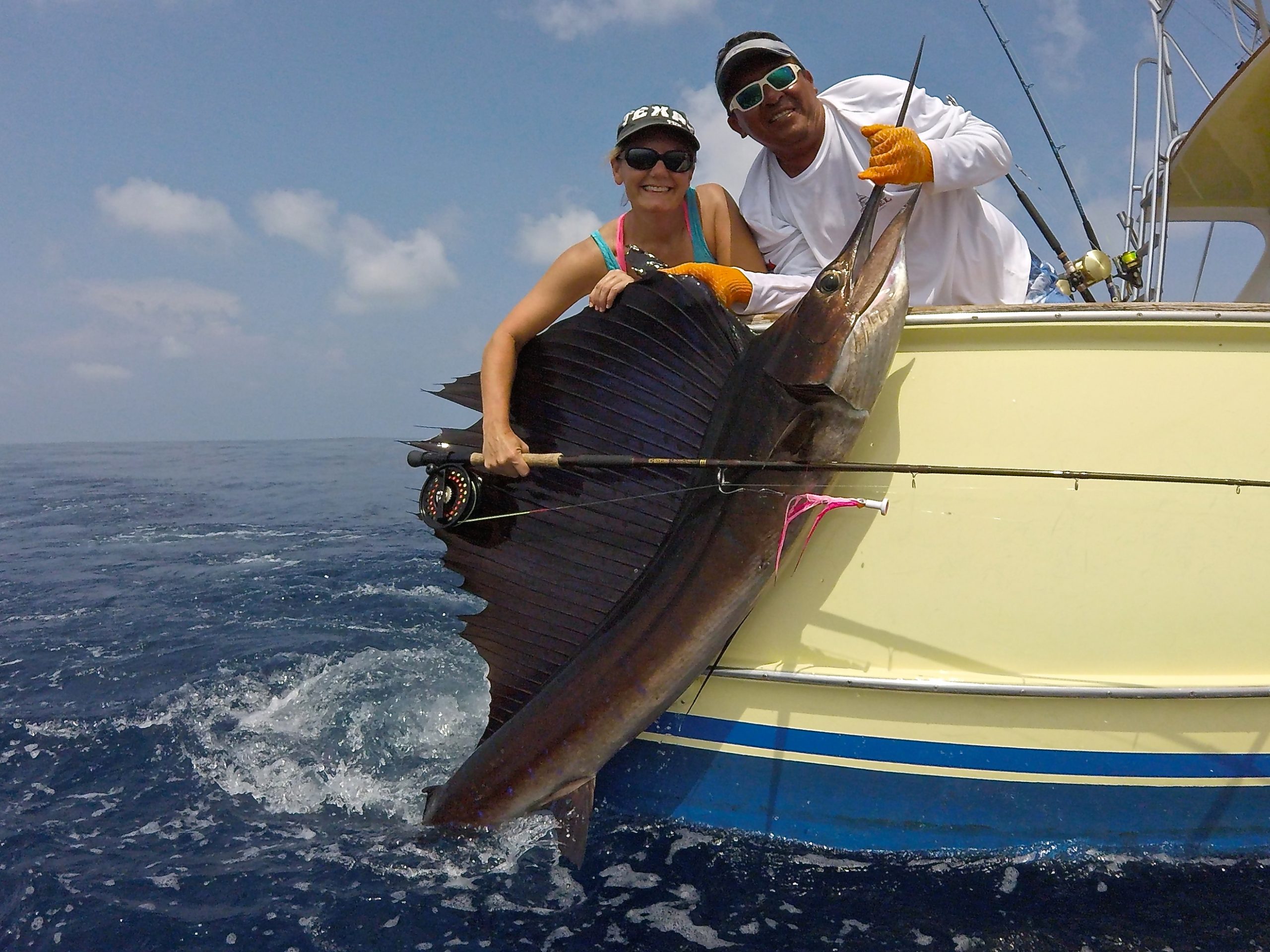 Amanda with a sailfish release on the fly…

June 5 through 9th we were targeting billfish on the fly, primarily blue marlin for our angler Amanda Thompson from Houston. We averaged 6 sailfish raises a day and over the 5 days of fishing raised 4 blue marlin, the first a very large fish in the 600lb range that came in red hot, got hold of the teaser and that was that, impressive to see though way too large to be throwing a fly at. A few sailfish releases on the fly from there on in… 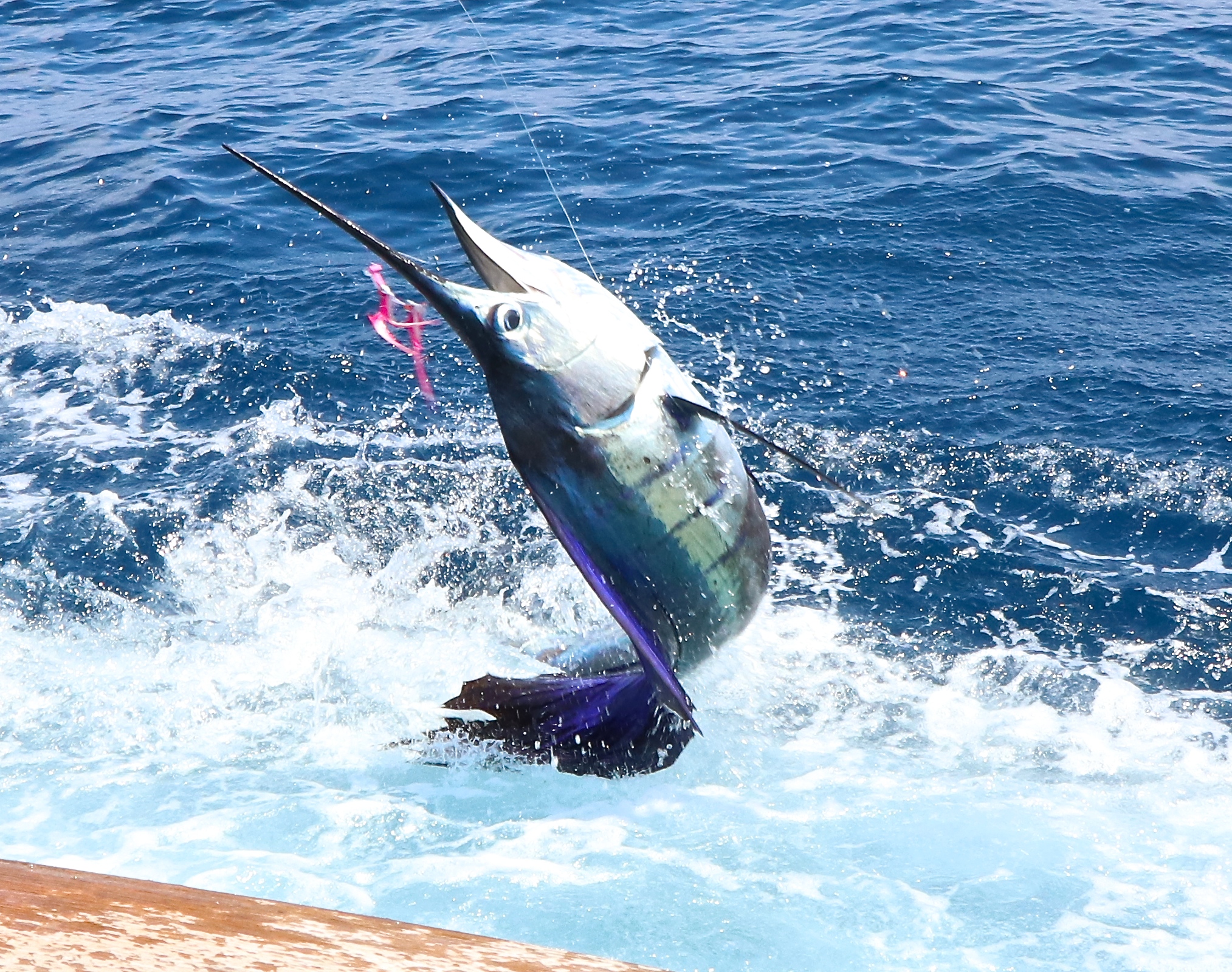 And covered a lot of area 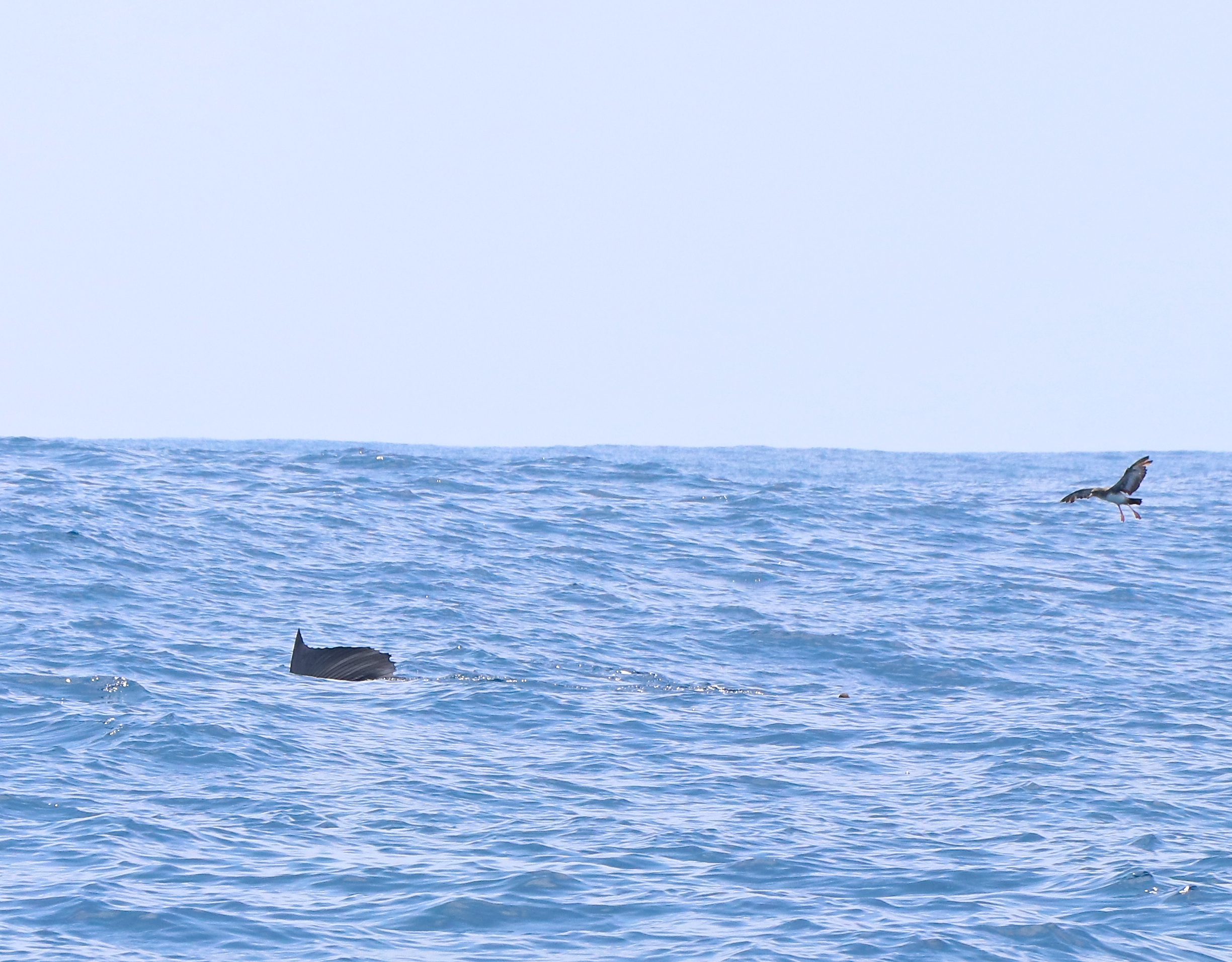 Finding hard to tease fish on the surface…. 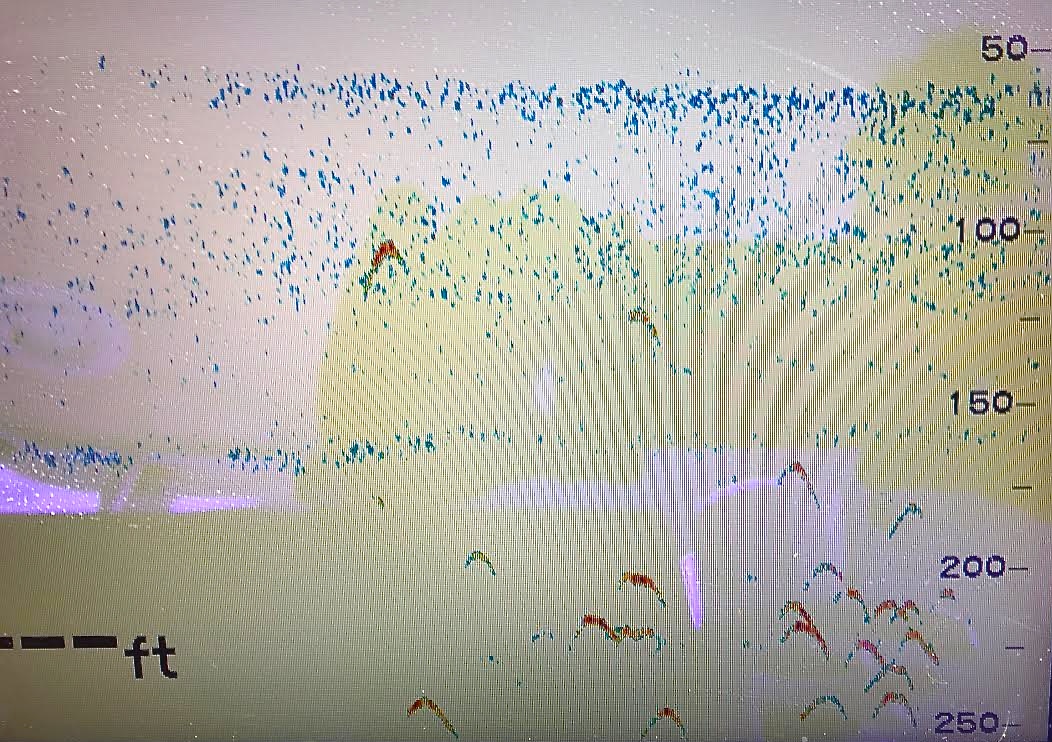 And marking plenty of activity deeper, we raised 2 sails here that didn’t tease all the way in….

The last 2 days we had our blue marlin shots raising the perfect sized fish of about 200lb that teased all the way on before fading right at the business end and later in the afternoon another fish of over 350lb that did all the right things…. 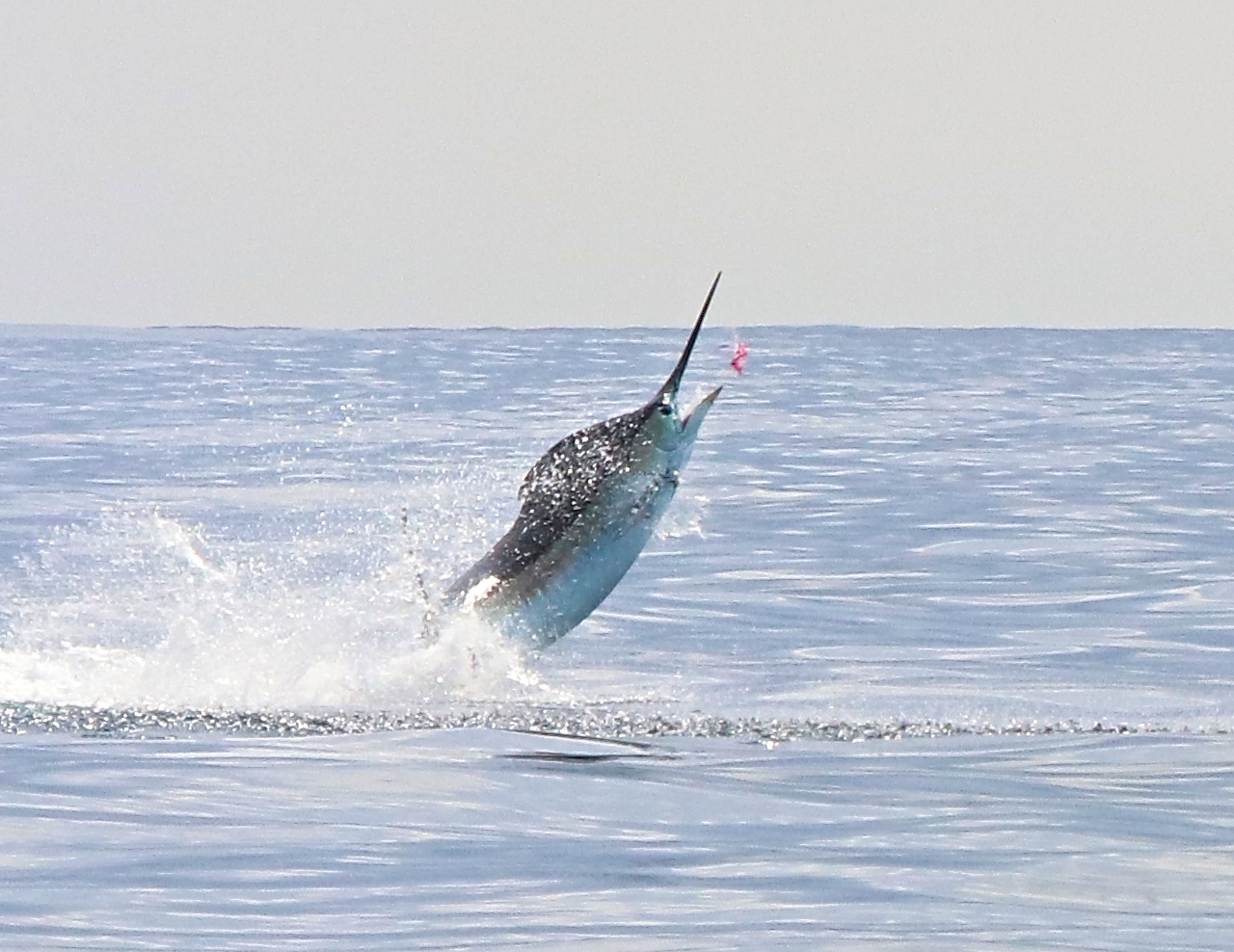 Last day out we had some sailfish action in the morning and then early afternoon teased in another fish in the over 350lb class. For the fly, these are large fish, probably a bit too large….still, awesome to tease in and get the bite right there with no prop wash after knocking the boat in neutral….. 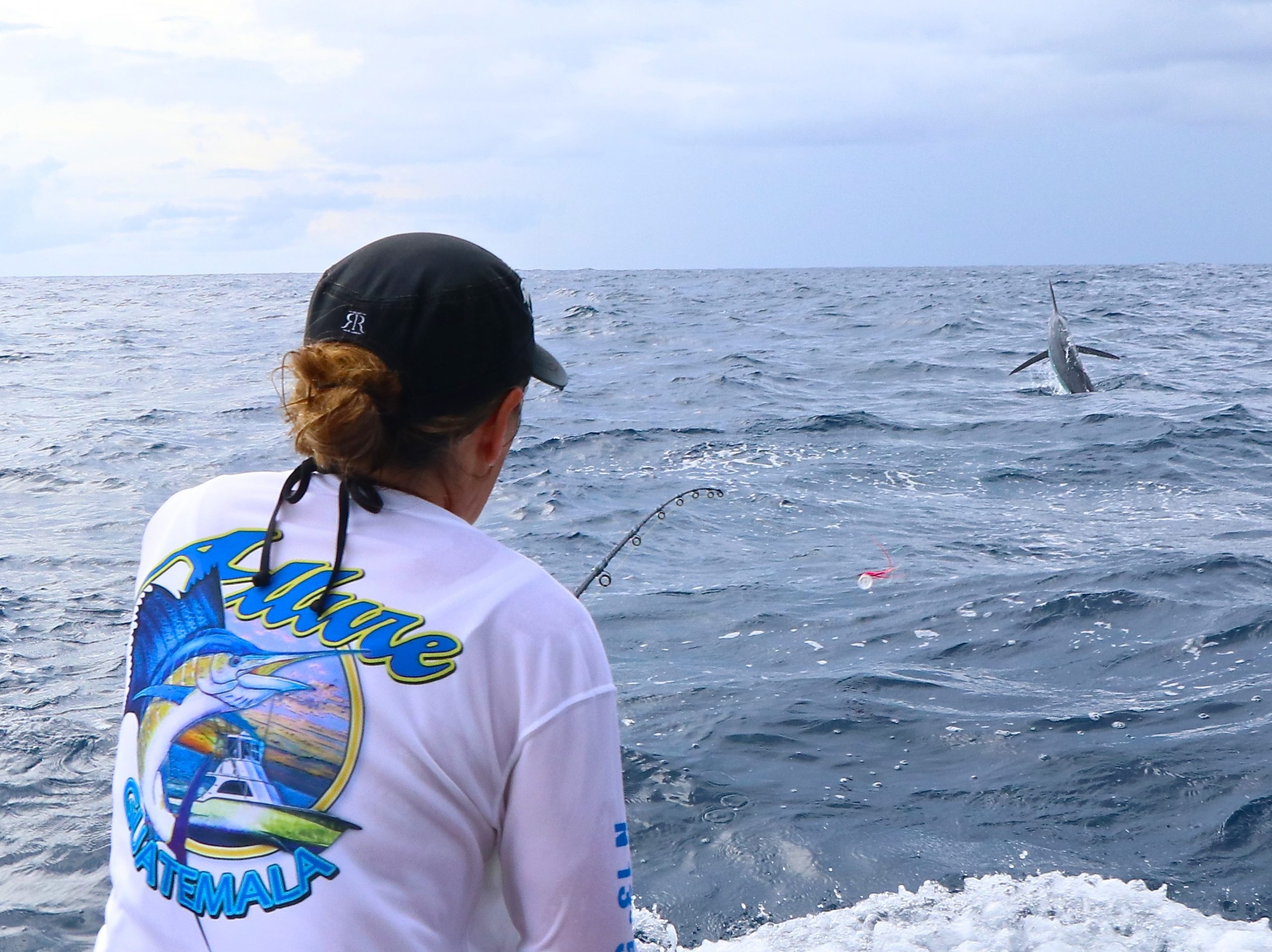 Getting close on the 2nd blue…..

Amanda did an incredible job on the rod and had the fish on for a brutal 3hrs and 13mins. We got close to it on several occasions though it was one tough customer and on the last run despite the drag being backed off the 20lb tippet parted ways….A hard way to finish the trip though thats the fly game.

A good fun trip overall, the qauntity was down though the quality was there….

Summer time is blue marlin time, we’ll be back and open for business from July 19th on, from there on in we have excellent blue marlin fishing right through to October, the sailfish are here year ’round and the mahi and tuna bite over the summer months is also very good. We can discount these months but make sure you don’t! Our favorite time of year is June through December with good variety and quality fishing being the rule…

For the past 13 years while conventional fishing we have been exclusively using Eagle Claw 2004EL non-offset circle hooks in the 7/0 size for sailfish with 10/0 and 11/0 hooks for marlin. They find the top corner of the jaw when used right near every time. Suffix International for our monofilament and braided line, Cam Sigler for our fly’s and flyrods when flyfishing  and we’ve teamed up with Bonze International for our teasers. They have proved to be deadly, awesome teasers that have raised some big blue marlin and the sailfish have been hot on them as well… 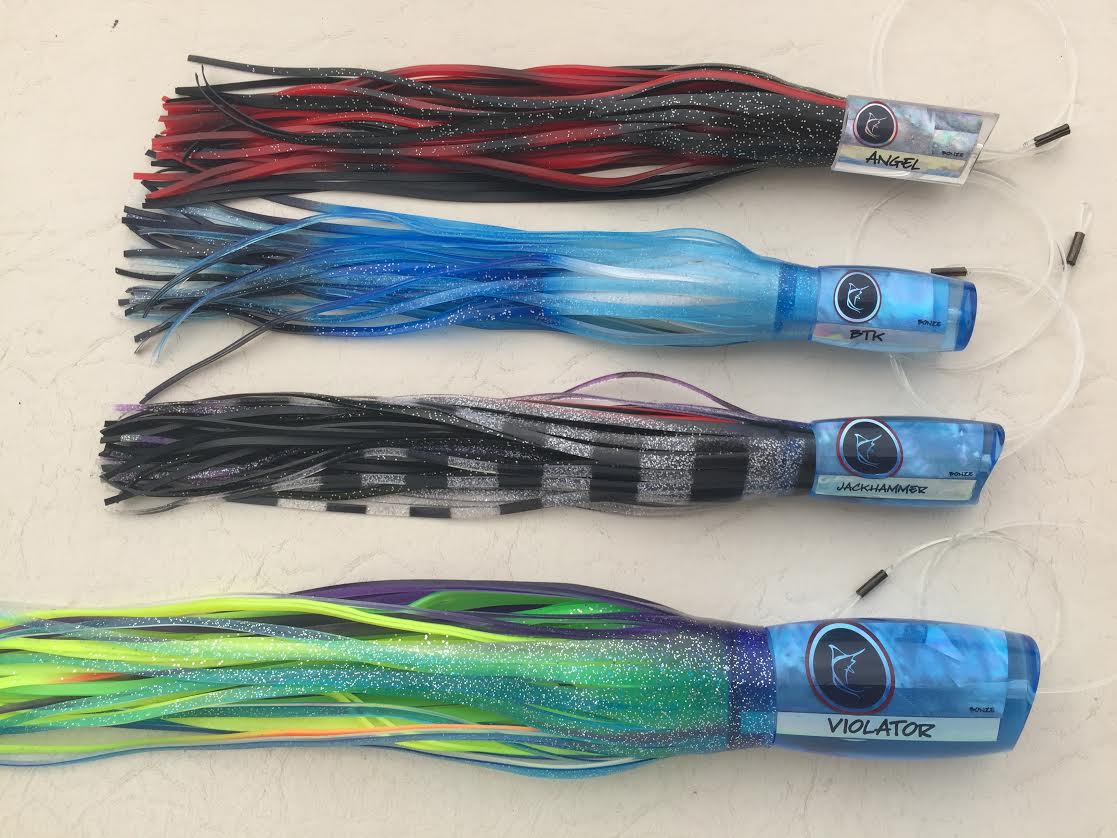