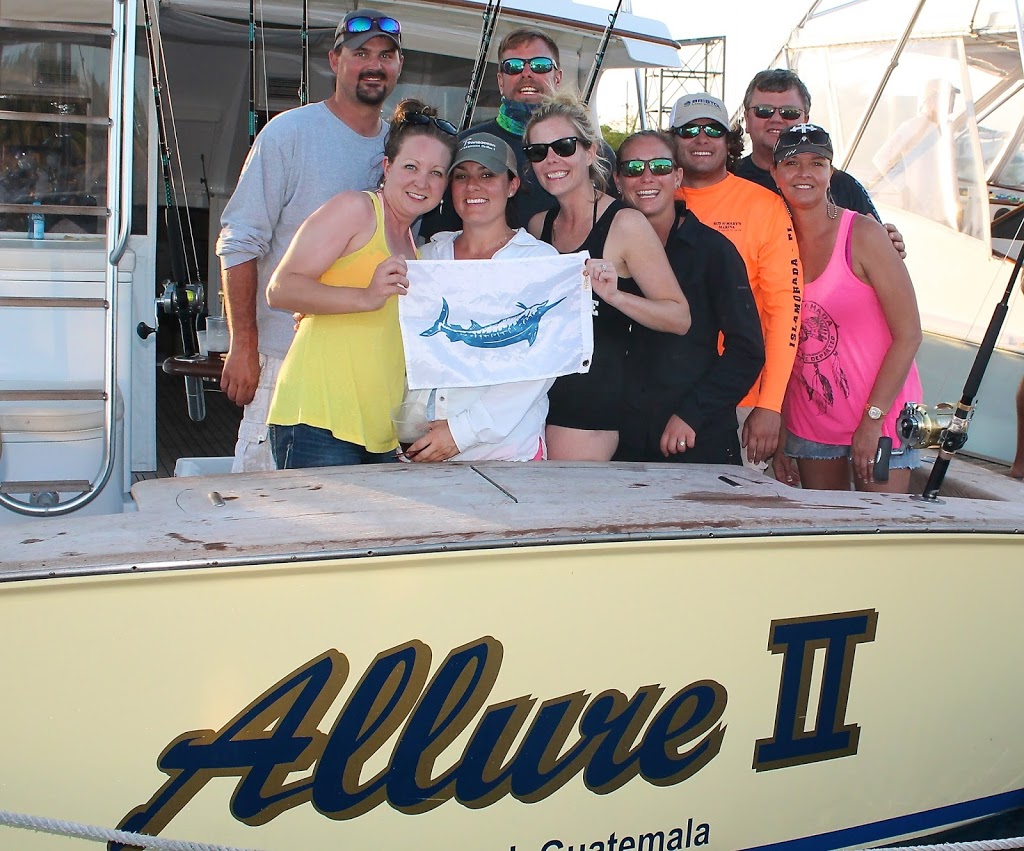 L-R: Bo and Kristen Stocks, Lucy Fisher, Eric and Sollie Graham, Ashley Schneider, Busch Thomas, Mitch and Mellissa Dawz
December 11th and 12th the Ashley Schneider organized group of above came in for the weekend, good to see some familiar faces and a few new ones to welcome and show what we have here. They timed their trip well too with some good fishing out wide! Between ALLURE II and INTENSITY they released 79 sailfish from 132 bites and 1 nice blue marlin tagged and released for Kristen Stocks over 2 days of fishing!!! 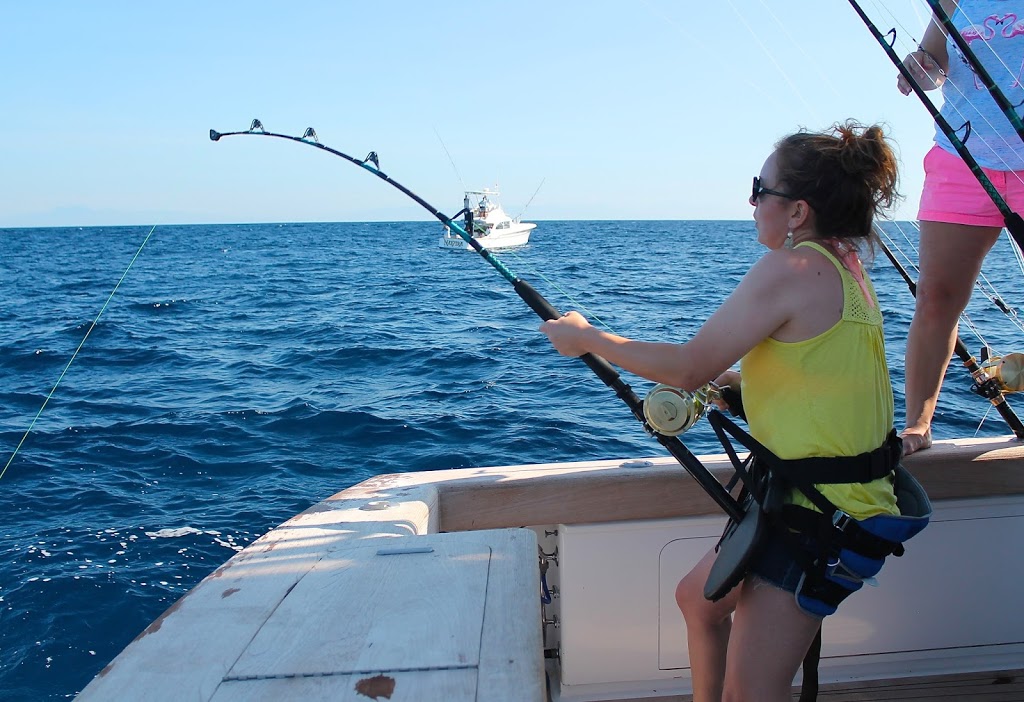 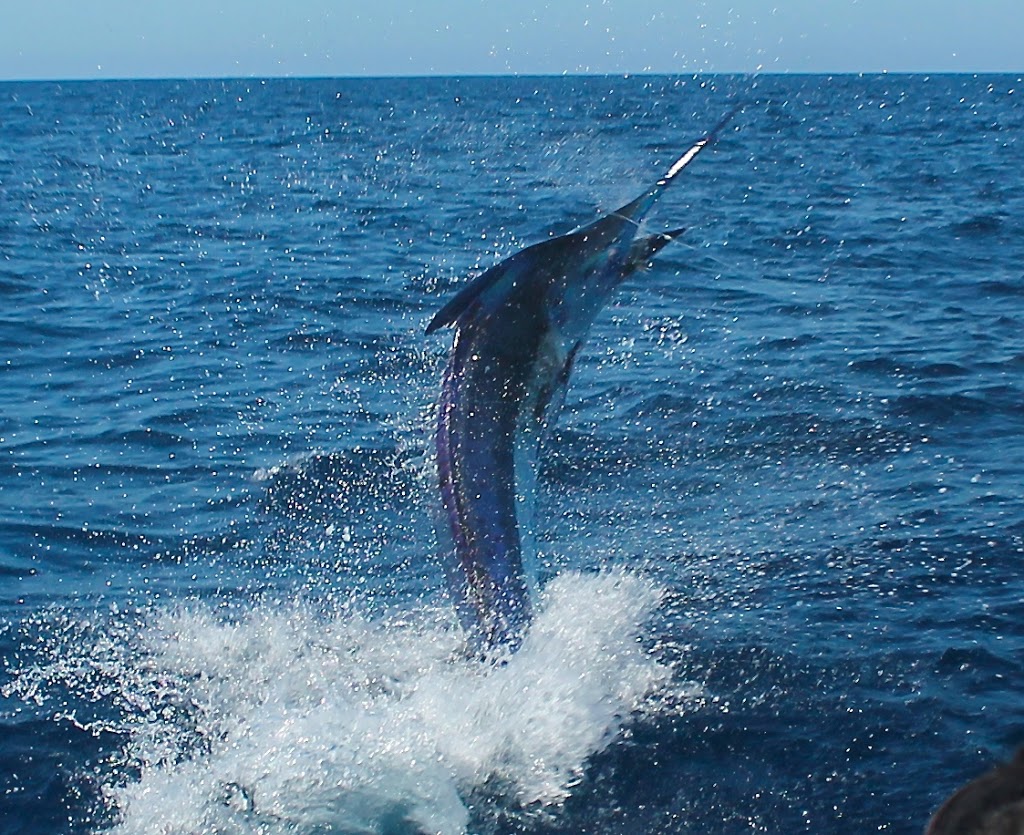 And did a great job on the rod to get the tag in…. 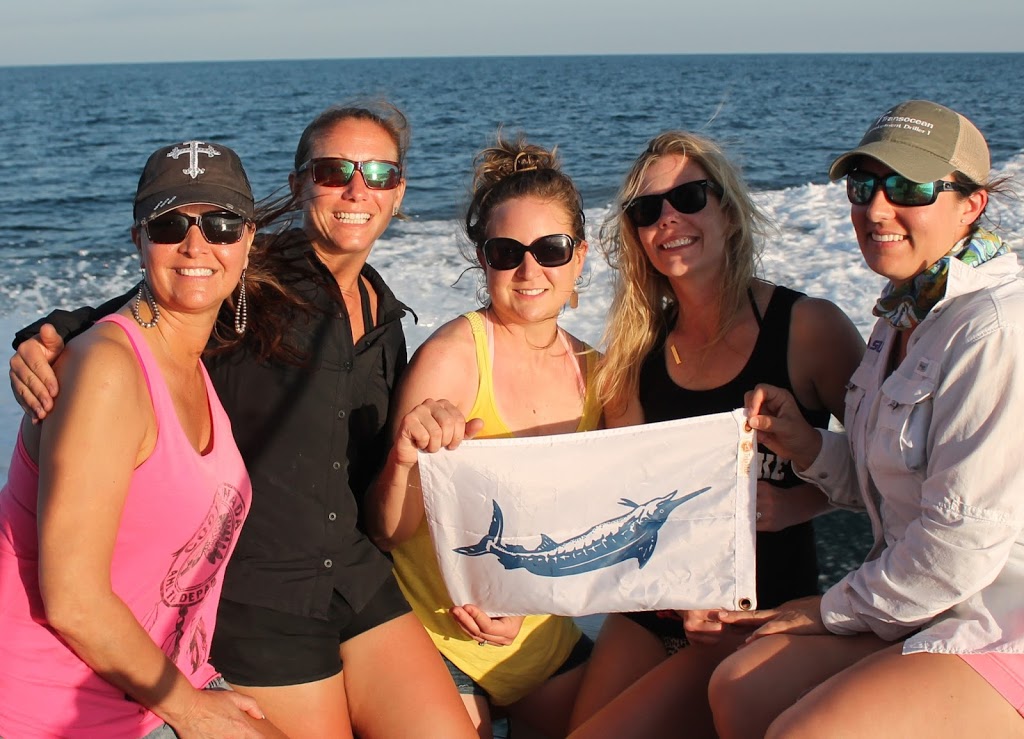 The girls enjoyed a ‘few’ campechana’s out there and on the ride home. 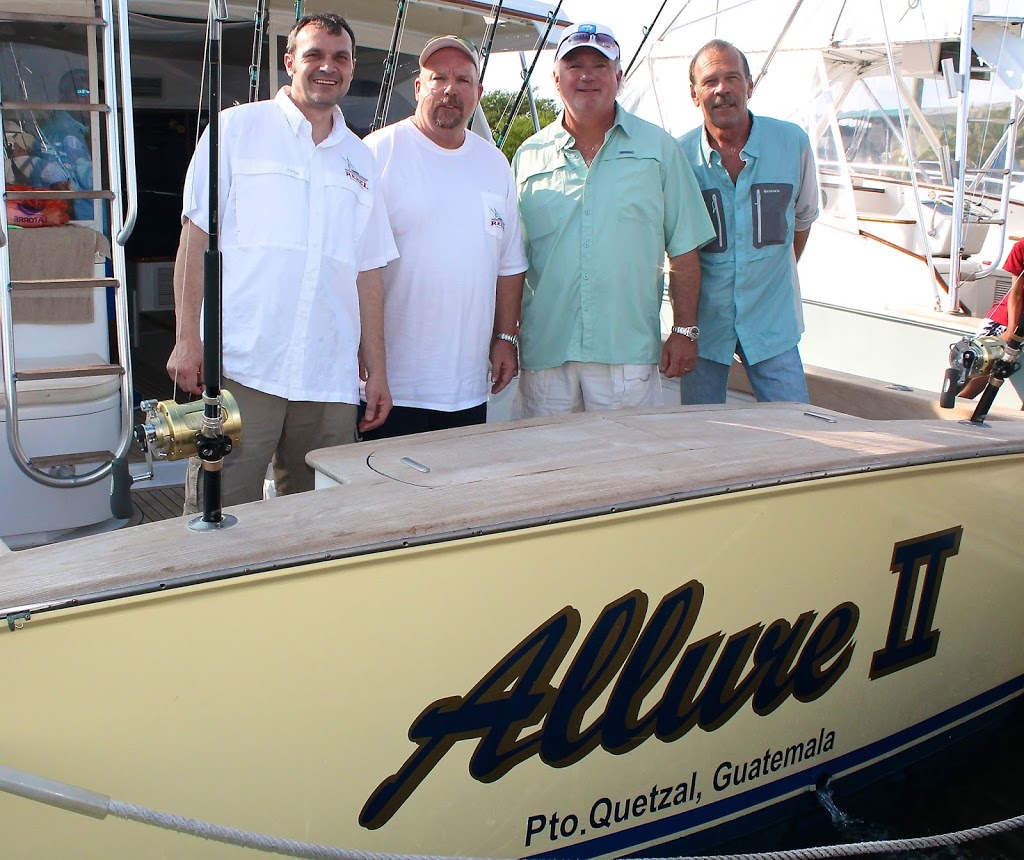 Glen Eckett, Phil Winterton, Craig Johnson and Steve Goodchild
December 14-15th good to see ‘El Jefe’ Craig Johnson and Steve Goodchild back down here, this time introducing Glen and Phil to this fishery. First day out we split the group with x 2 pilots on ALLURE II and INTENSITY, both boats headed east and between the 2 we released 27 sails out there from 40 bites. also had a nice fat blue marlin on that unfortunately jumped off. To finish off the day we got into some spinner porpoise getting a quadruple hook up of nice tunas on the first pass…. 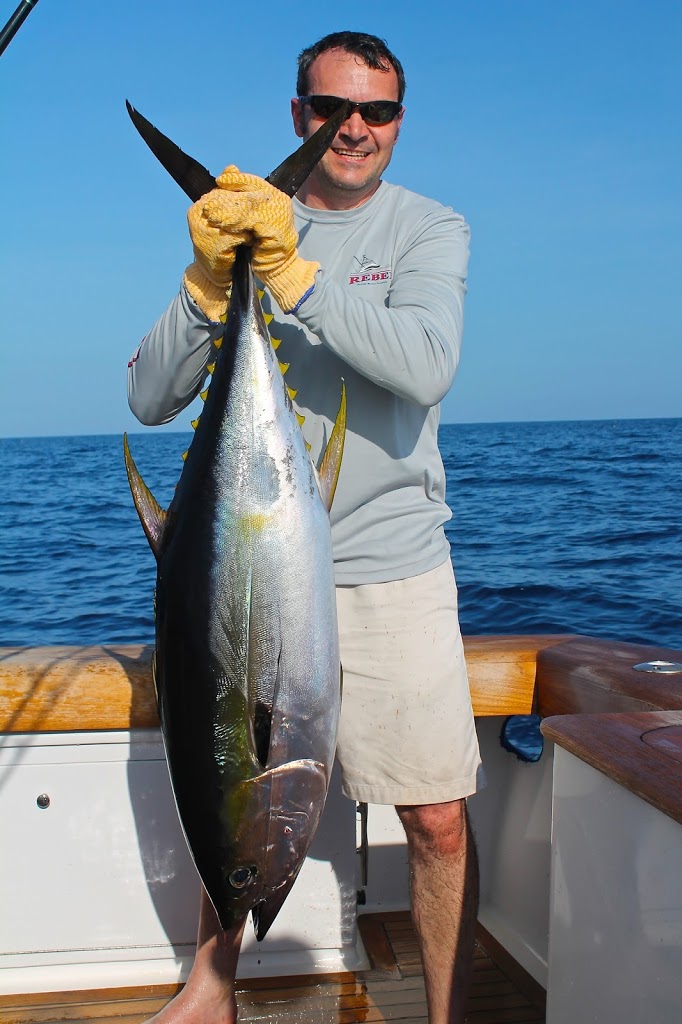 Glen with typical sized tuna
Next day out with just the 4 anglers on Allure II we went out for a half day, this time going west and got into the fish out there as well. 2nd fish for the day in the teasers was a blue marlin that didn’t come in all the way. From there on in the sailfish bite was pretty steady and about mid-morning we raised a nice big striped marlin that teased all the way in, we got the bite though the hook didn’t find the corner of the jaw and pulled. No marlin luck! We pulled lines in @ 1300 with 12 sailfish released from 21 bites. Great 1/2 day!! 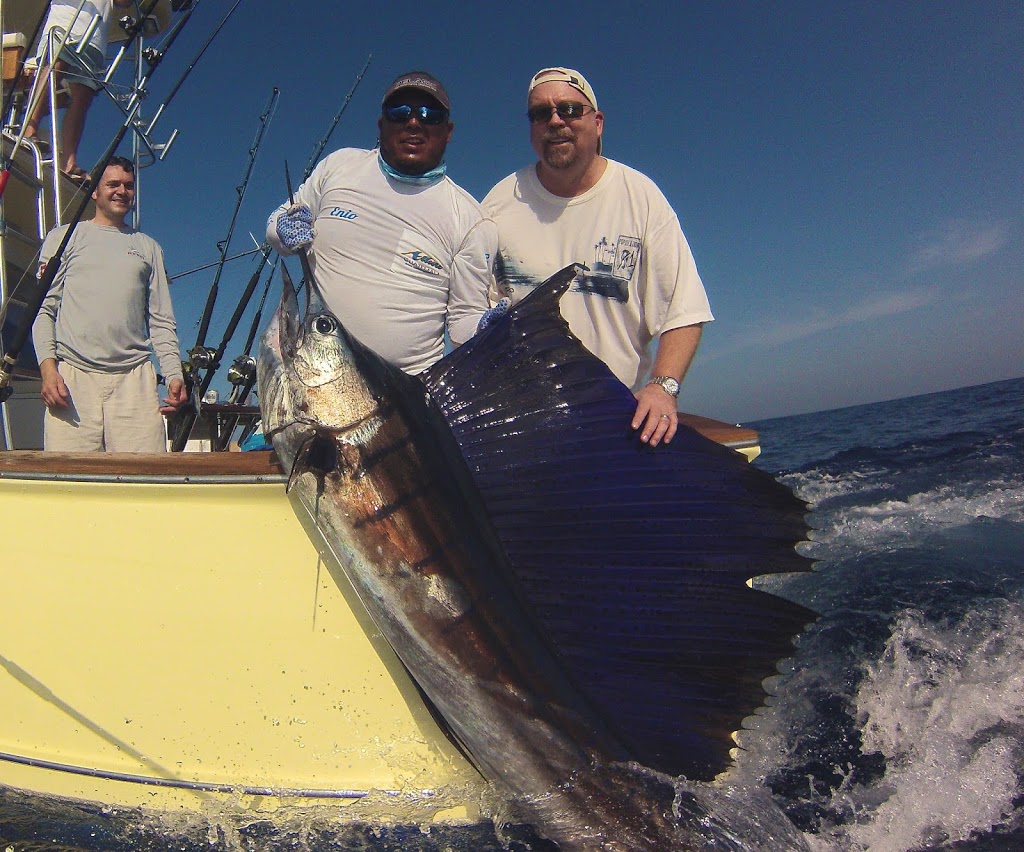 And Phil with a large sailfish 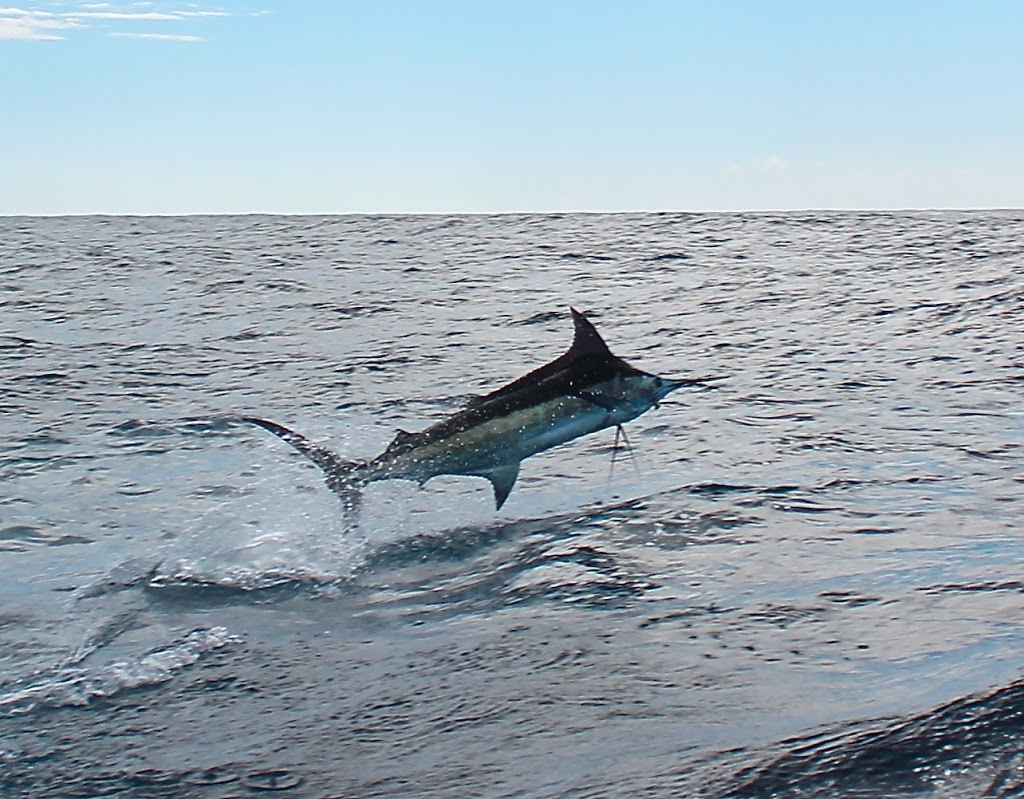 Dec 18th and 19th el otro ‘jefe’ Sñr Hill Dishman estaba en Antigua por las ultima semanas en la escuela con su maestra aprendiendo español. Por su ultima fin del semana aquí en guate fuimos a pescar…
And the fishing was good, we went west first morning out where we finished out our last day on the water and the sailfish were snapping. We started the day on a group of spinners and hooked a beauty yellowfin tuna, we were on it for about 20mins and had the big fish with sickles near the gaff when……the hook pulled….arghhh, it was a nice one too. The next fish was a big blue that piled on the teaser, got a mouthful and didn’t come back… For the rest of the day the sailfish were biting well and we finished up releasing 36 from 54 bites!
Next day out we couldn’t find ’em like the day before though still good fishing with 13 sailfish from 24 bites and the last fish of the day was a hot blue marlin that we got the tag in and released. 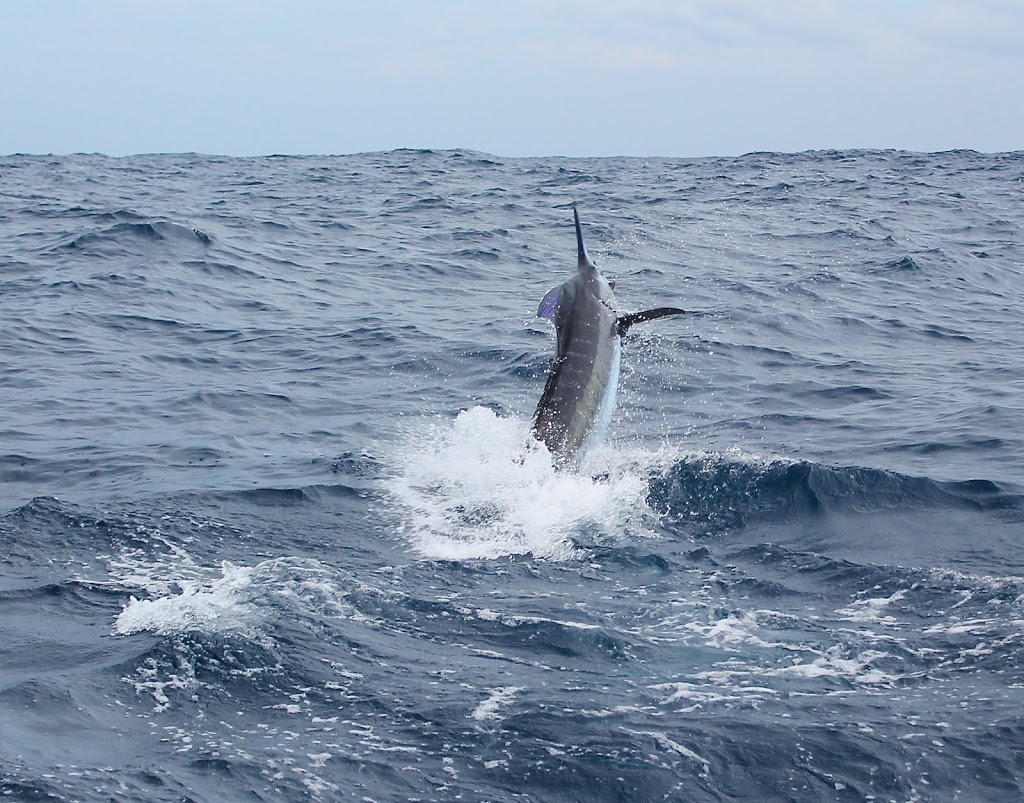 So, the good fishing continues!! It has been a great start to the season out there and it looks like it is going to keep on. Right now this is what we have available, in January the 20th and the 21st is open and in February we have a couple of amazing opportunities with Friday the 12th and Saturday the 13th open. Also a couple of weeks back we had a large group postpone their trip of February 19-20-21st (a Friday, Saturday and Sunday!!) to 2017 because of El Niño and other commitments. We have other boats reserved for this group so is a great opportunity to get a group together and get in on these prime dates! A few people were expressing their concerns about El Niño and how it would effect the fishing. Right now the sailfish bite has been very consistent, we have seen more striped marlin than usual, the tunas are averaging 40-50lb instead of the normal footballs we catch (and there are some large specimens out there in the mix as well) and the blue marlin have been in the spread very consistently. Water temperatures are varying between 84′ and 85′ and the water color/clarity has been excellent. All good in Guate so get in touch with us to get in on this amazing action…
Contact:
liz@sailfishoasissportfishing.com
Cheers, have a great Christmas and an excellent New Year, see you down here for ’16!!