December 17 and 18th we hosted Chief Tauzin again, this time with Micheal Michalka, Greg Spitzenberger, and Casey McDermand all from Houston, Texas. The fishing was great leading up to the trip with all 3 of the boats out there on the 16th releasing over 30 sails a piece. So we were looking forward to a great hot bite out there 16-25NM to the east. The fish done a disappearing act on the fleet though, they seemed to be spawning with some big females and 1-2 smaller males around the big girls, I guess they had other thing on their minds and went off the bite. Still, in 2 days of fishing we raised 23 in the spread, had 20 bites and released 12 sails, the mahi mahi bite was very good with 13 big mahi’s boated, all in the 25lb and plus range from plenty of bites, so lots of good sport there…. 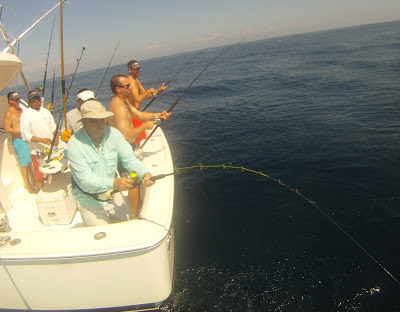 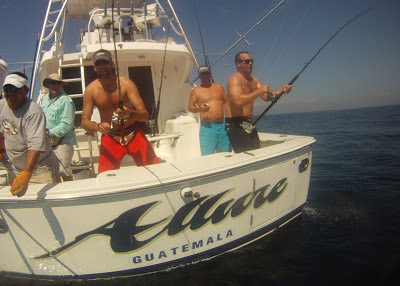 L-R, Mate Julio, Michael, Casey, Chief in the back ground and Greg 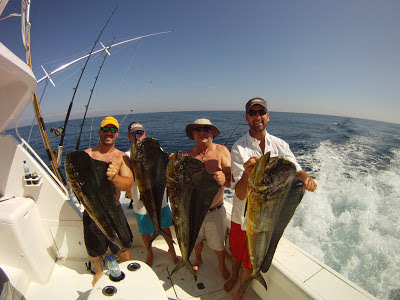 23rd December we hosted for one day of fishing from Antigua Hal Vogel, his son in law from Chicago Joseph Grigely and Manuel also from Antigua. Before this there was some good fishing out wide to the west though we hit a good cold front blowing hard from the ENE. With the crew we had it was decided to run up the beach to the east, then head out and troll down sea all day to make life a little easier. On the fly today with Joseph a keen angler on the long wand. Trolling down seas all day we raised 7 sails and had 5 bites on the fly, pretty good considering we never worked any particular area…. Manuel and Hal before releasing a nice sail. 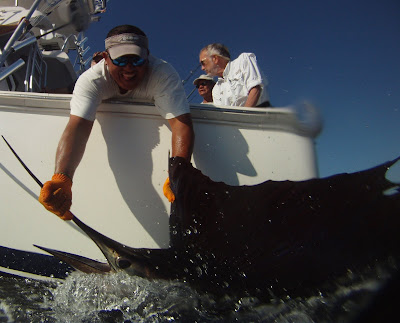 Overall the fishing has been good, now the cold front has passed through we’ll be able to work areas where the bait and birds were congregated. January is looking full though there are still some opening’s from there on in. See you down here, in the meantime stay safe and have a great New Year. We have another bash at the OASIS planned and a full house with the Blue Dawgs playing once again till the wee hours……..we’ll be out there fishing from the 31st on, hangovers and all!!