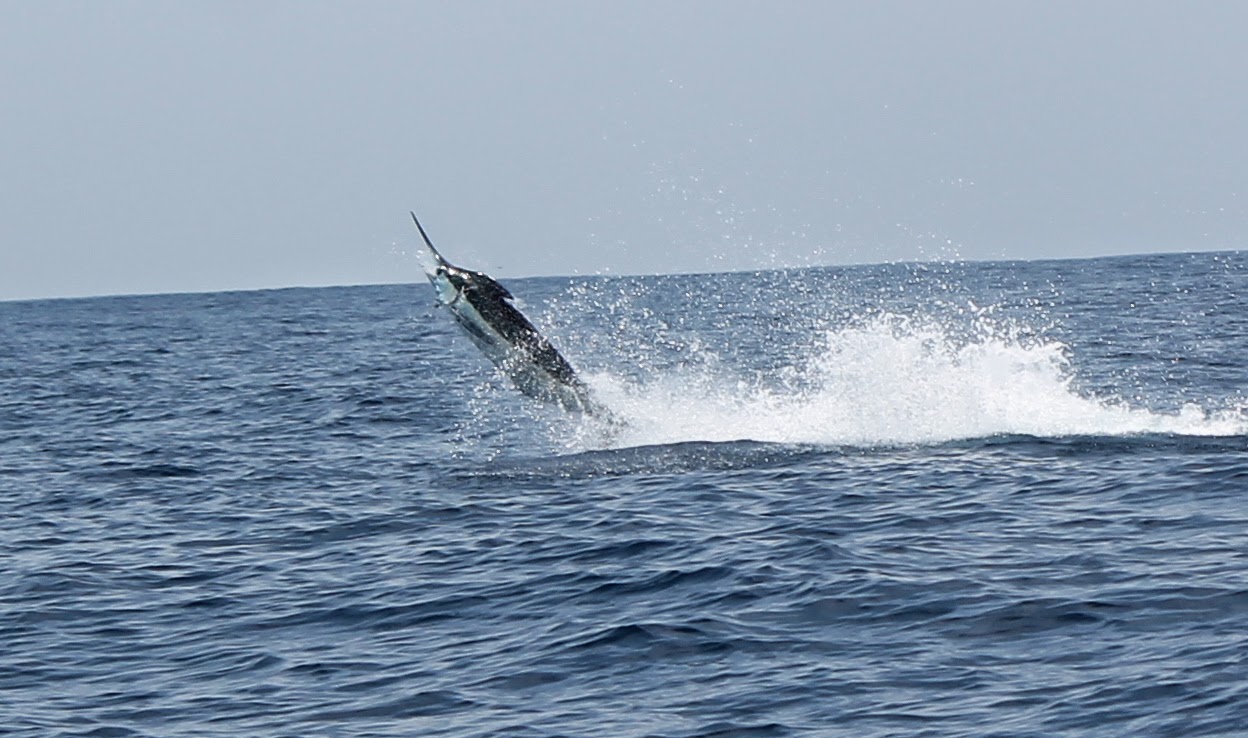 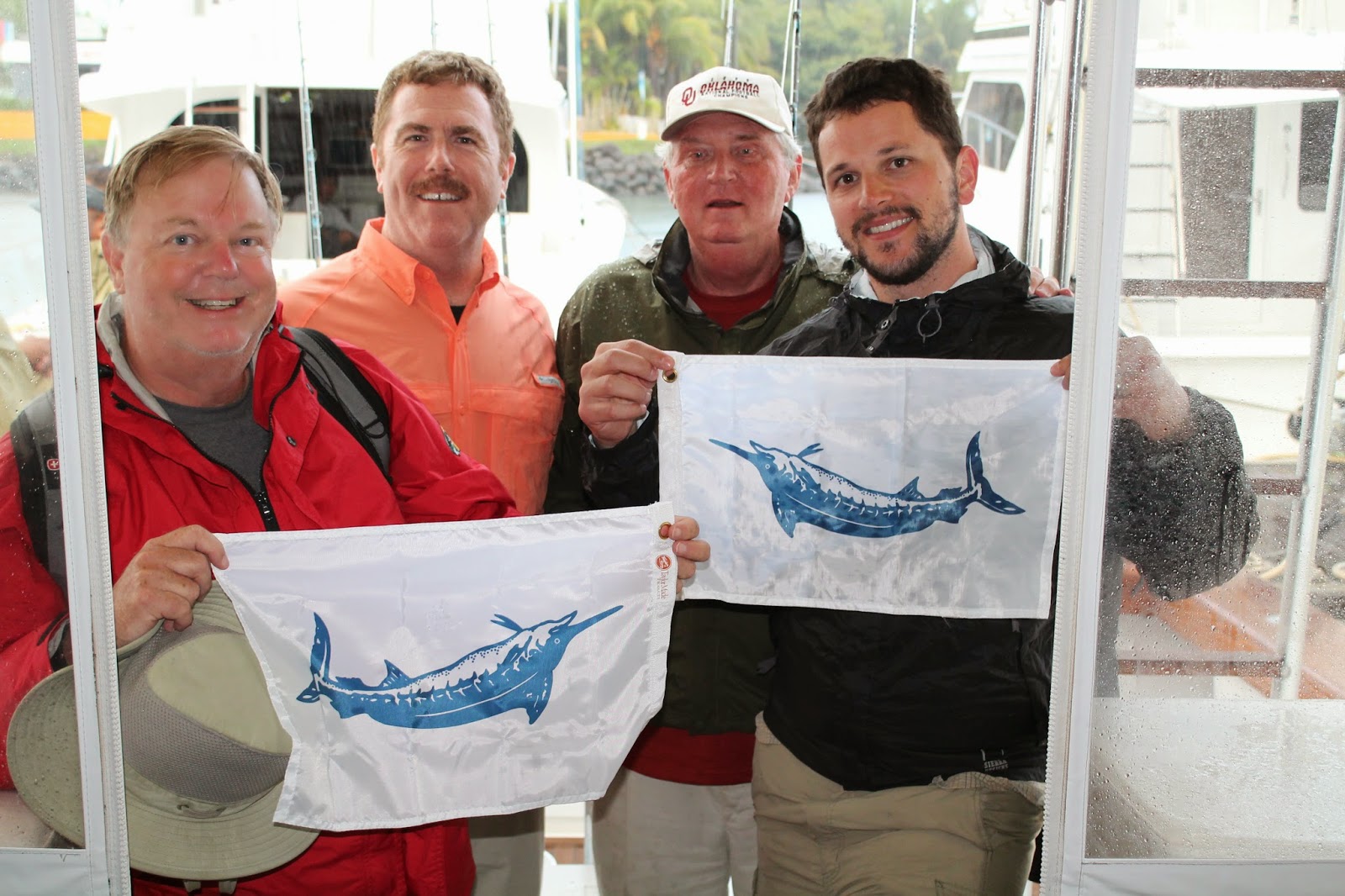 Jeff Quick, Jay Higgins, Dr Gaylon Crawford and Josh Hudgens
From Arizona we hosted the above group at Sailfish Oasis and on Allure II. The sailfish bite was a little below average the first couple of days though we did get into sails everyday with the bite picking up as we tried different areas each day trying to find them. For the trip we raised 25 sailfish with 22 of those biting and the guys fished well releasing 12. As well as sails we got into a good pod of spinner dolphin late one afternoon boating 12 nice yellowfin tunas off them and picked away at the mahi’s with 5 boated including a couple of beauties like this one for Jeff… 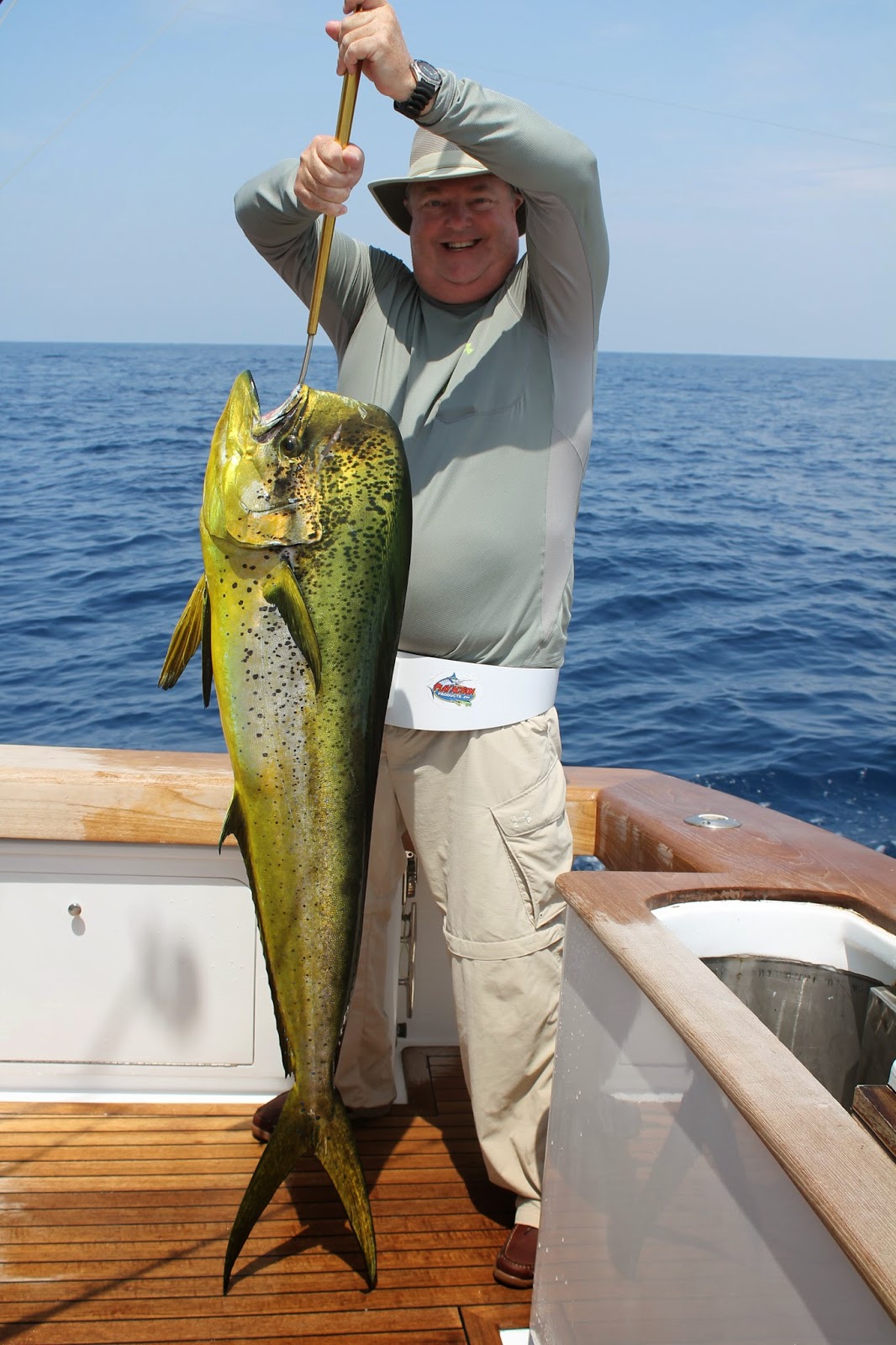 Jeff with a nice bull mahi
Just before lines in on our first day out we raised a blue on the short teaser, the fish didn’t eat the pitched mackerel though went back and ate the swimming ballyhoo on the 30lb test. Dr Gaylon (Blue) Crawford was up and into an extremely stubborn blue that only came up jumping once. Pulling angles on it he finally got the release after an hour or so, a real tough one! Trying to get the tag in him Josh took over and spent another half hour on the fish when he got him up once again for the mates to get the leader, just shy of the tag shot we broke him off. A great release for 70yr old Gaylon. Dr Blue was into it again on the final day, with steady sailfish action we had a double of sailfish on, making the turn another fish came up on the long teaser in the prop wash and ate the pitched ballyhoo on the 30lb test once again. It was a nice blue of 250lb+, we released both sailfish and concentrated on the blue marlin that the good Dr was hooked up to. Once again another very tough fish that took about an hour to get the release on, a nice triple header!! 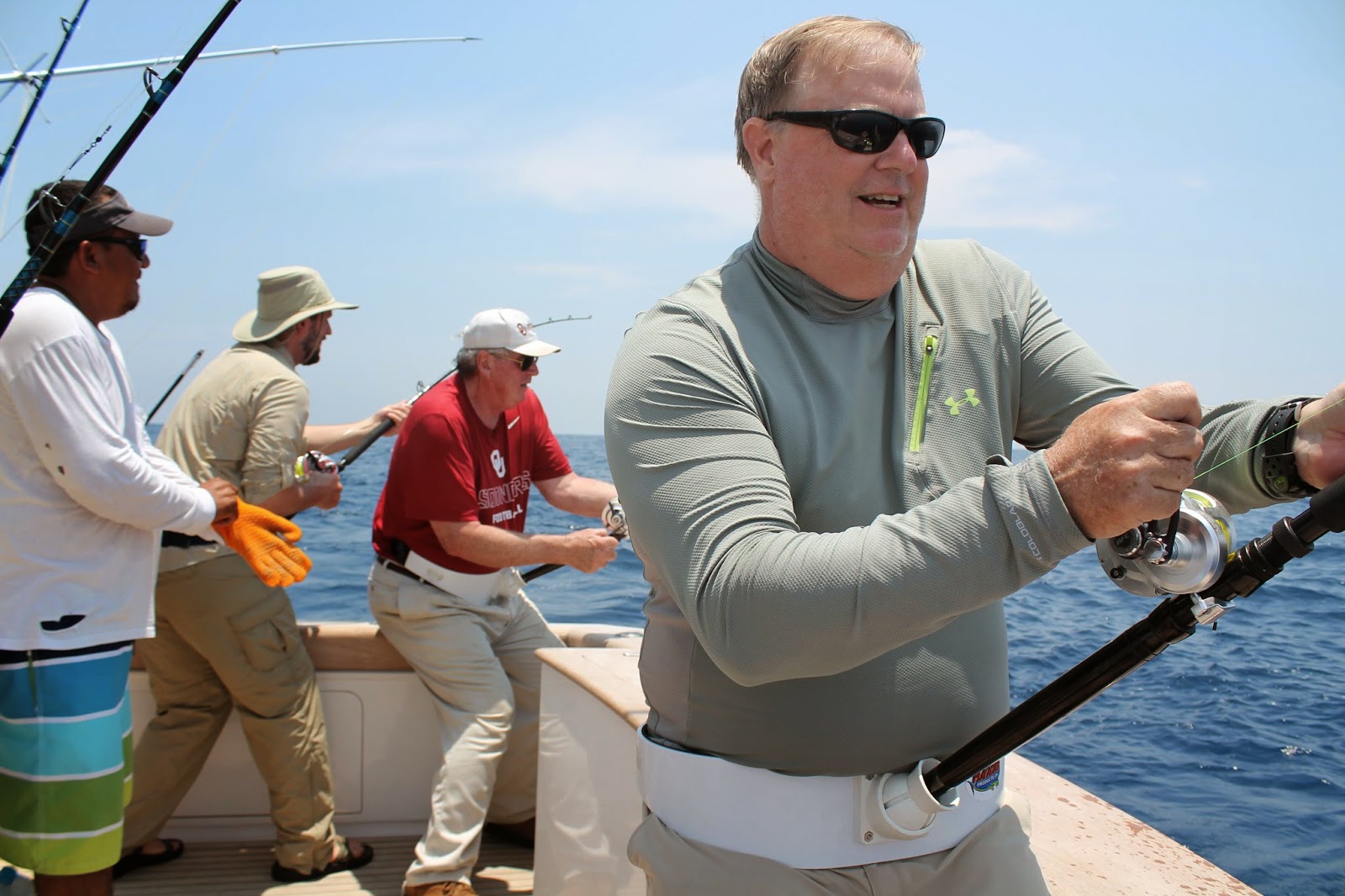 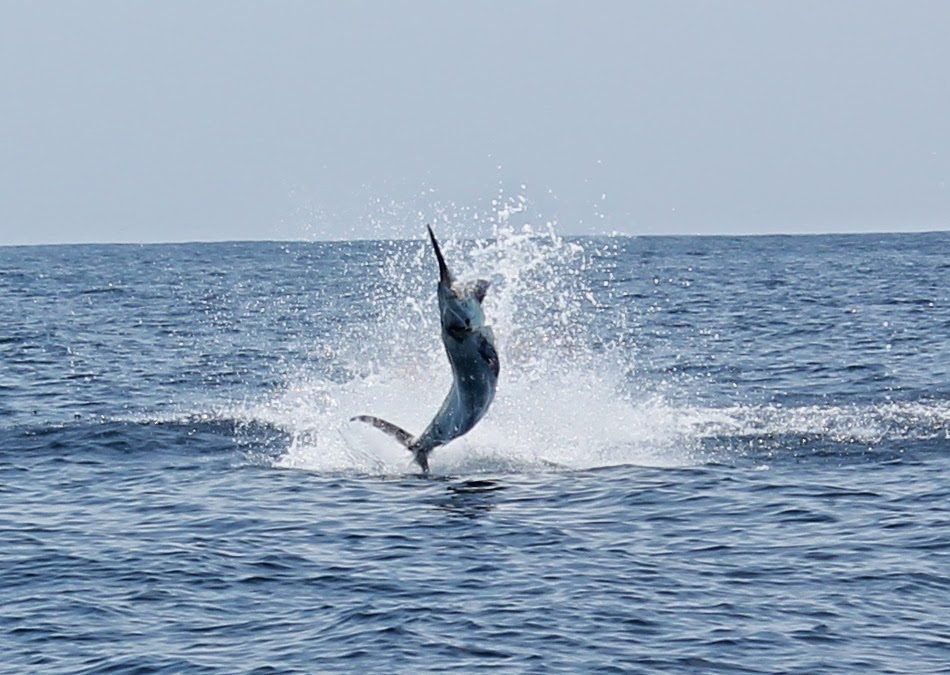 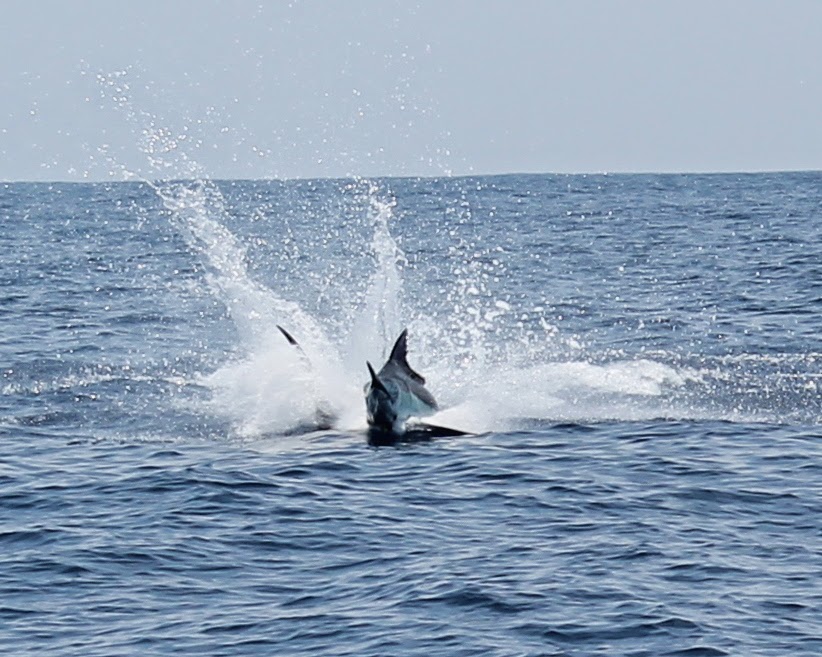 Tearing it up!!
At the end of the last day we raised a large blue that came in from the left, sat in the prop wash, circled around and on to the right bridge teaser, came in strong, we had the pitched mackerel back there, fish swung around and crashed the left bridge teaser in a second then went back and ate the ballyhoo. Being a large fish we locked up the 30lb trying to get the mackerel back there though did not get the bite on the mack. Still, an awesome sight to see with the light just right and seeing the size and speed of that blue deep in the water. All in all a great trip for the Fishing with Larry group with 2 from 3 blue marlin, 12 sailfish, 12 tunas and 5 mahi’s. That’s why we love this time year, plenty of variety!! 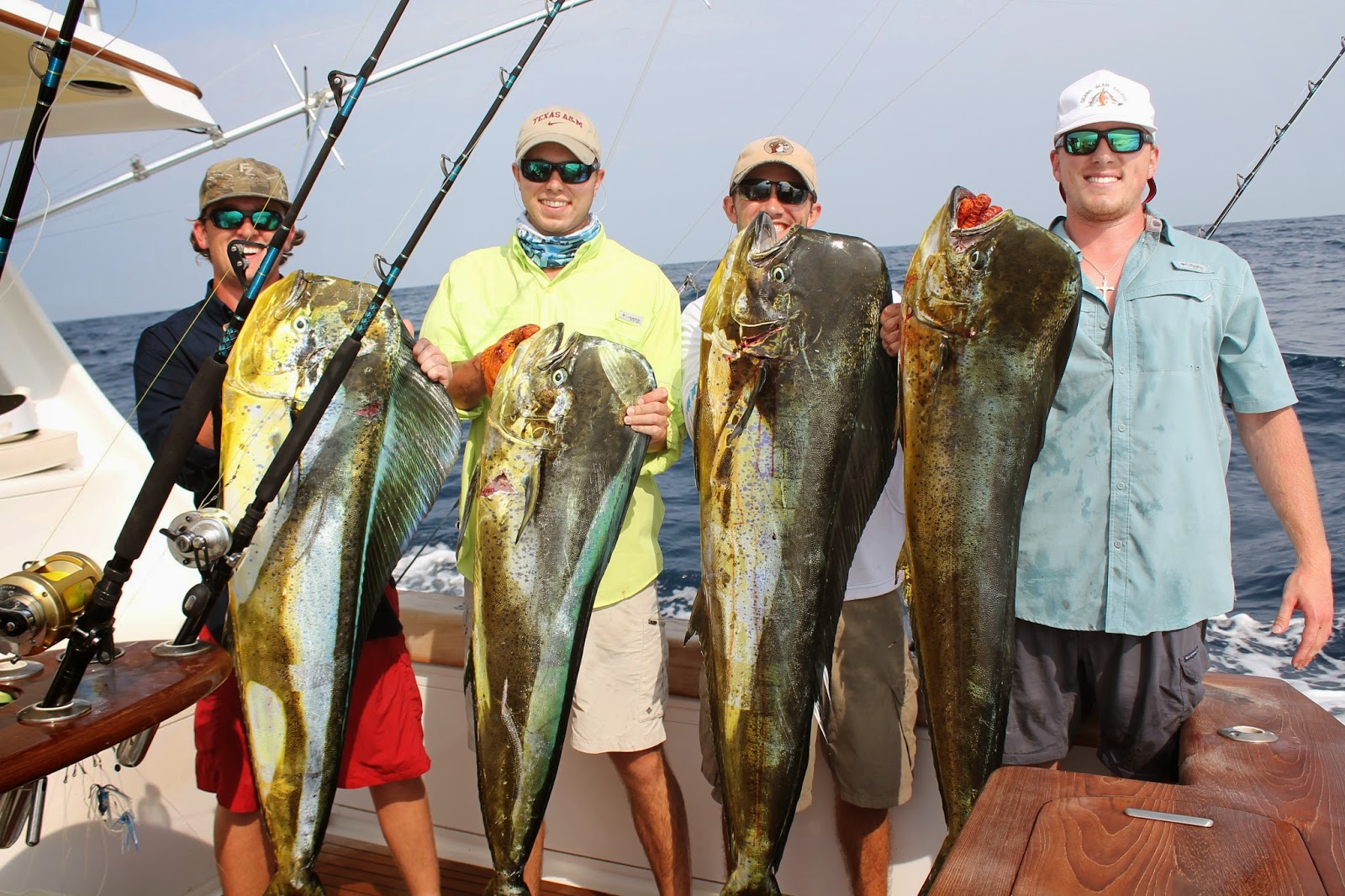 Colby Alexander, Cory Cobler, Kyle Murphy and Bobby Franklin
In for a couple of days of fishing we hosted these guys for their first trip to Guatemala and what a great introduction it was!! First day out we stayed in close fishing 7-10NM off the breakwall and had good steady action throughout the day. We raised 19 sails releasing 11 from 16 bites and boated 9 good sized mahi’s. The next day they requested blue marlin so we ran out to the edge and after releasing a sail we got the one we were looking for, a nice tough blue pushing 200lb’s… 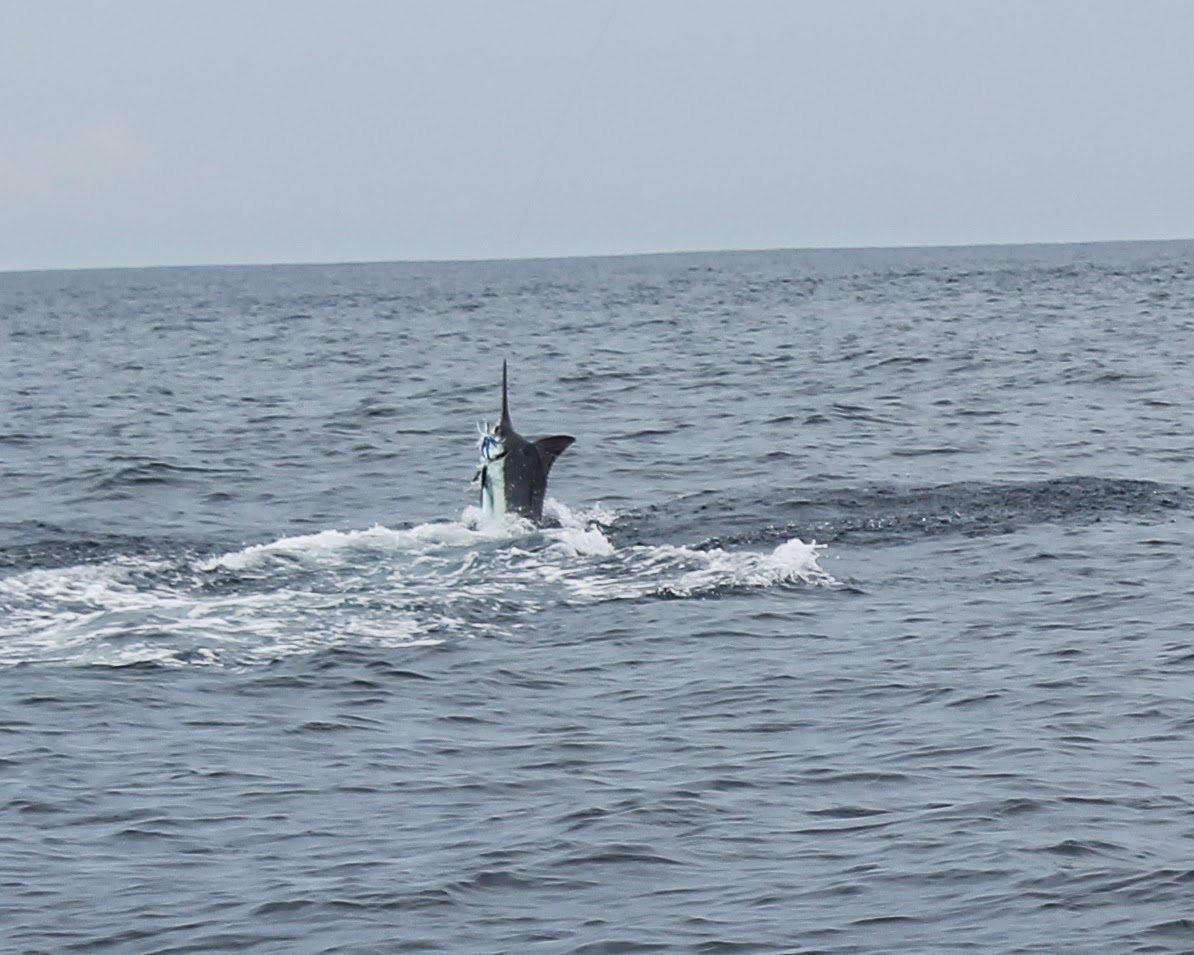 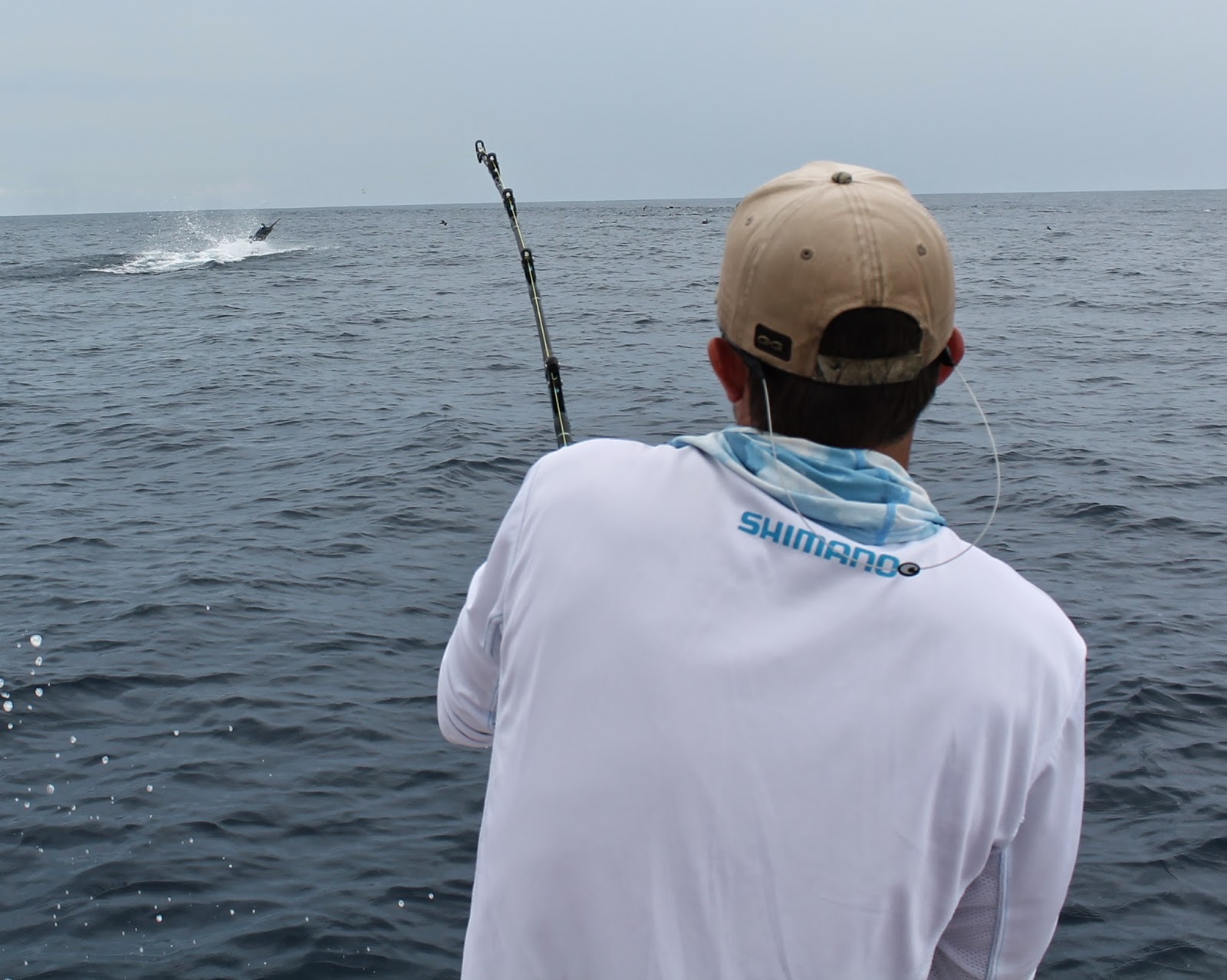 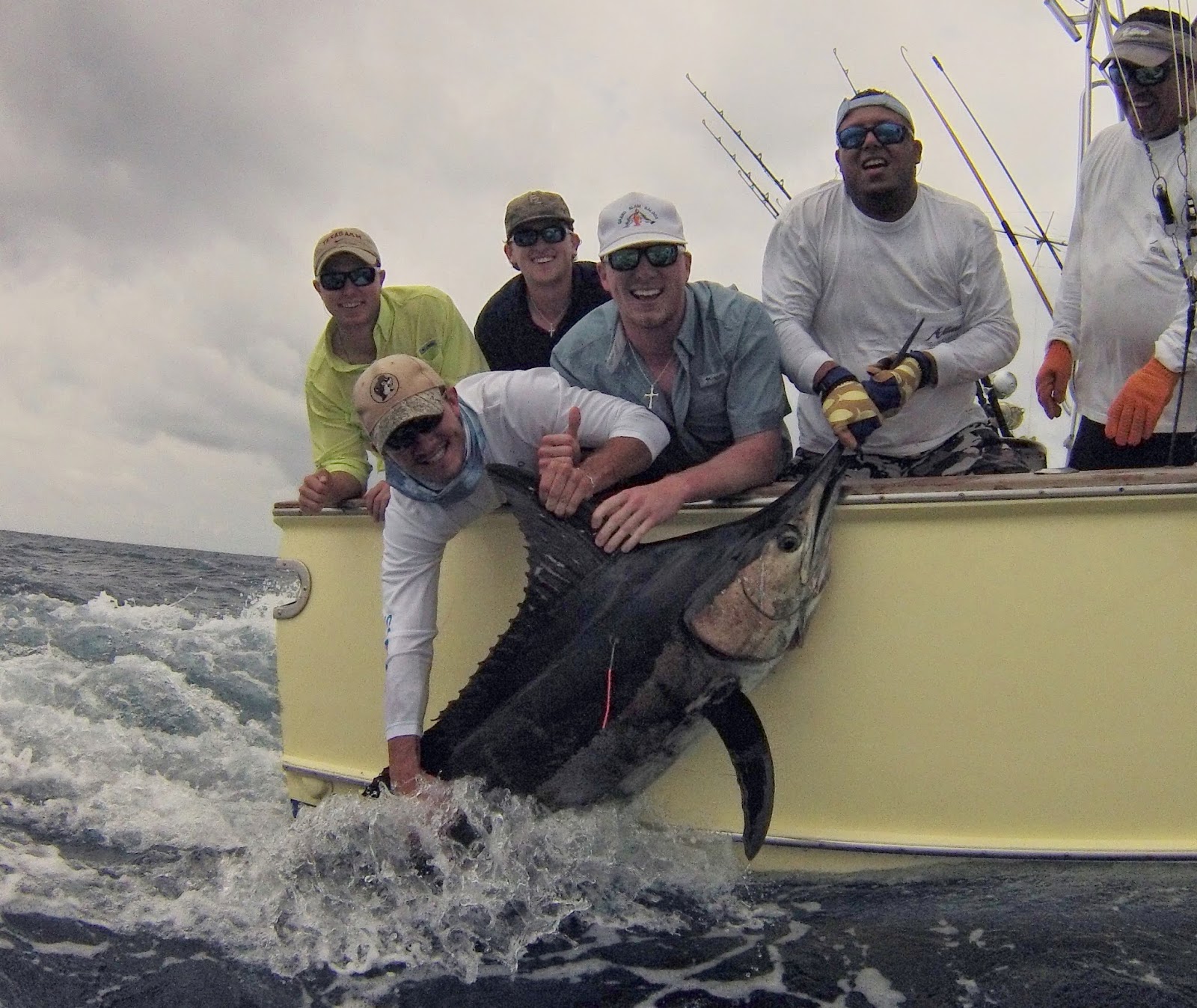 Tagged and released….
Kyle Murphy did the job on this one that came up on the short teaser, dropped back to the bridge teaser and crashed the trolled ballyhoo/Ilander combo lure down the middle. Trolling down the edge we soon raised another blue on the same short teaser it made a half attempt at eating the mackerel then disappeared. We ended up with 3 from 6 sailfish bites out there… 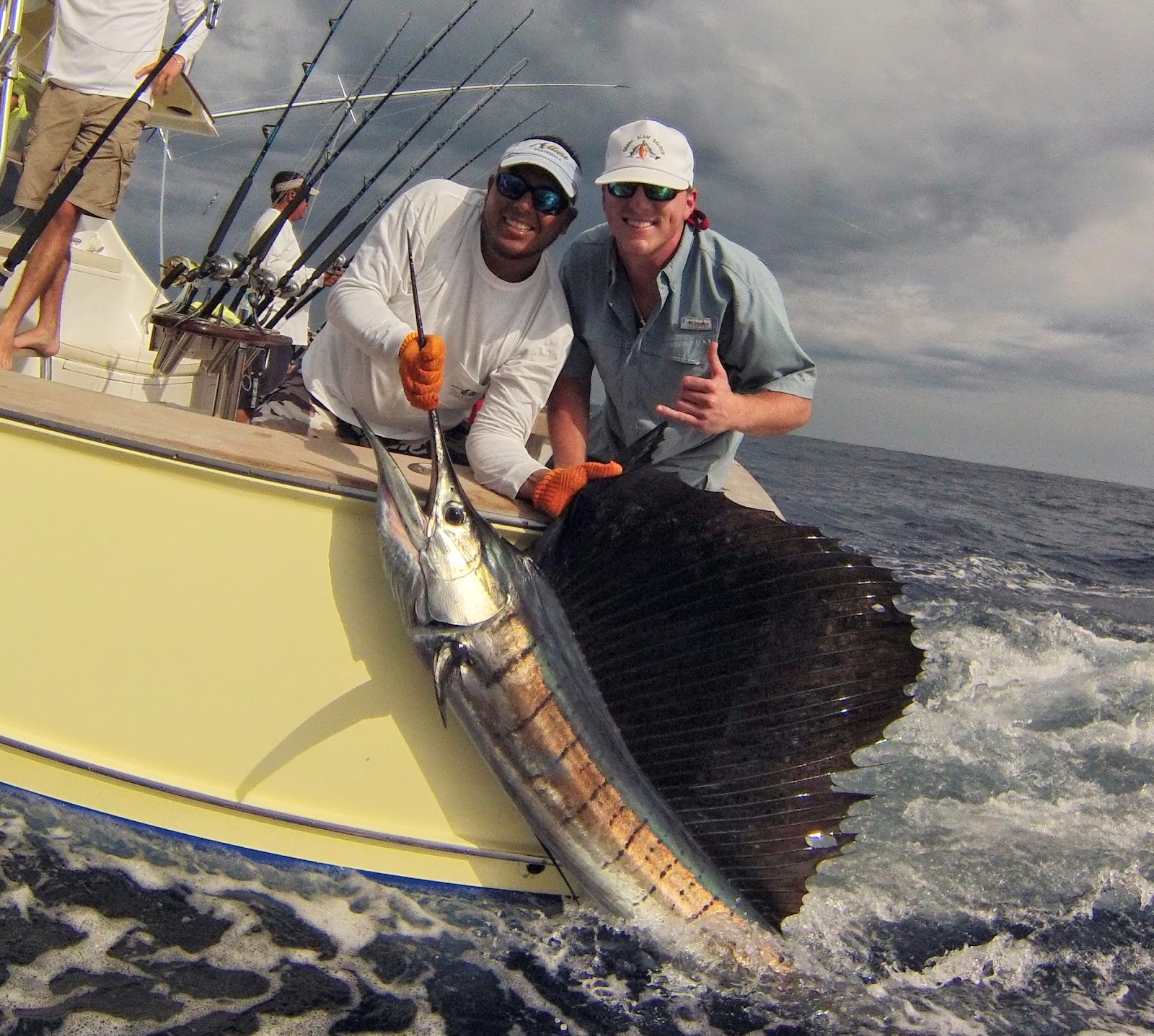 Bobby Franklin
Then for the last 2 hours of the day we found some old flotsam that was loaded with small tunas and XXOS mahi’s, some big ass bull’s marauding baitfish so we rigged up small tunas on the 30lb. All the guys got into some of these big, tough fighting fish. It was spectacular stuff with some great bites right beside the boat slow trolling baits, long hard fights and these big fish can jump!!. A fun way to finish the trip with 14 sailfish released, 1 blue marlin and a bunch of mahi’s… 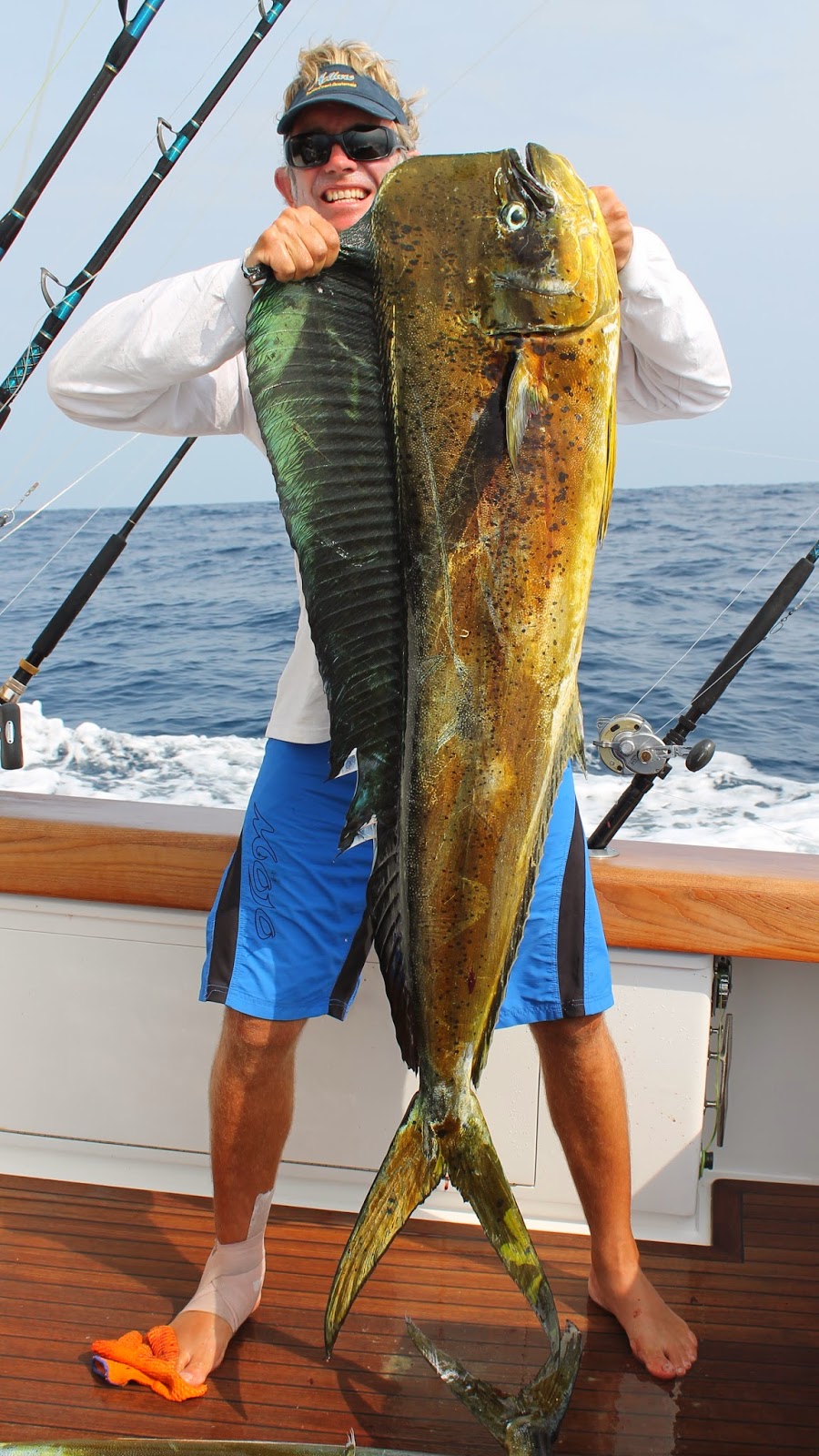 Over 50lb’s of bull mahi….I had to push into this photo of one that Bobby caught…
As mentioned, this time of year the blues are out there, sailfish as always are biting, there are plenty of mahi’s and the tunas are about too. All in all a perfect variety of off-shore species to try your hand at. We will be here the whole summer and hope to get out offshore as much as we can!! There are some great deals to be had for the up-coming months so get hold of us to get yourself in the picture.
Apart from the summer months we are already starting to book up for the coming season from November on through into 2015. Be sure to secure the dates you want now to avoid disappointment.
The 40ft Capps, ALLURE II has proven herself to be a great fish raising boat, we have had a blast on her these past months and everyone who has fished her has commented on the perfect lay-out, open, comfortable, good AC, an awesome all round sport boat. We still have ALLURE the 39ft Bertram and other top of the line boats available for the larger groups
The OASIS LODGE has also received great reviews for its comfortable rooms, great food and service. We’ll be doing some more improvements in the months ahead to ensure its reputation as the best is maintained. We can accommodate groups of up to 20 anglers so get in touch with us here for quotes:
liz@sailfishoasissportfishing.com