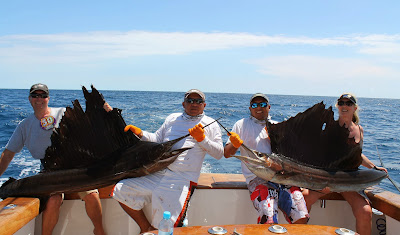 Martin and Wendy from NZ celebrating Marin’s 50th b’day in Guatemala with a double header!

Just a quick report from the weekend gone. All the way from New Zealand we hosted Wendy Lord-Renner and Martin Lord and from Old Blighty (England by way of Antigua, Guatemala) George and Kate Carver along with George’s mum (mom) Glenys Carver. On Saturday the 19th we took out the British contingent after a leisurely start in search of sailfish on the fly for George, a keen flyfisherman hoping to get his first billfish on the long wand.
The blue water was in close though no one was home and after a few jumps out we finally got into some action about 28NM out raising the first sailfish of the day, great tease in, great bite, though some bad luck saw the 20lb tippet pop. Some practice at least! Next time up George did it all perfectly and released his first billfish on the fly after a flurry of jumps and long runs by the 90lb+ sail. 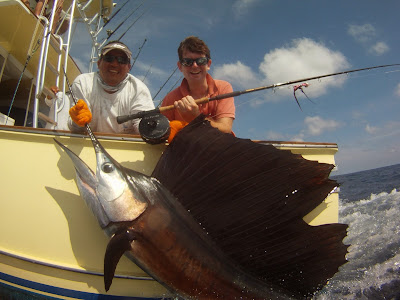 First billfish on the fly for George Carver

With one down it was easy from here on in and he released another soon after of about 65lb’s. We brought out the spinning tackle for Kate after that and raised another 2 sails missing one as well as landing a few mahi mahi. In the dying minutes of the day with Gladys up next on the flyrod we raised a blue of about 300lb’s on the long teaser, the fish came in deep on the small chugger before coming up aggressively though it disappeared at the business end. 5 sails raised with 2 from 3 bites on the fly, some good mahi’s and a great day had by all.

Monday 21st Martin and Wendy joined us for the day, we started on the conventional tackle and Martin was soon into it pitching a bait to his first billfish off the bridge teaser. He did it all right and came tight a nice fish…Soon after a double header for the pair and some good mahi action as well keeping the momentum going for the day…. 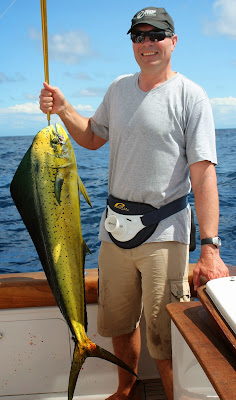 Martin with a typical sized ‘dorado’
Being another keen flyfisherman he was into getting the fly gear out and while down on the deck giving instructions we raised a hot fish on the flat teaser, no better way to practice than with the real thing! Everything went as it should, a great cast, hot bite and  he was on……. 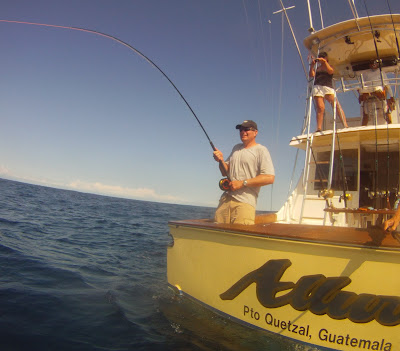 For the day, 7 raises, 3 from 5 on the bait, a couple raised on the fly with just the one bite and successful release as well as several mahi’s. With the pair due to fly out the following day in the early evening we had a few hours out the next morning before rushing them to the airport. At just 12NM from the breakwall at the 600ft curve, set up for flyfishing, we raised a blue of about 250-300lbs that teased in though again, another fish that disappeared at the business end. 40min later we raised another, you never know, it may well have been the same fish, got the bait back this time and the marlin slashed at the bait though never took it. Knowing there were some in the area we skip baited a small bonito and mackerel through the area for about an hour with no joy. After  that we trolled up the edge and came back through the area just before having to leave, another blue on the bridge teaser, this one about 200lb stayed deep and under the pitched mackerel making no attempt at it. While making a turn to get back to the spot we raised a smaller blue of about 150lbs hot on the short teaser, all over it, this one for sure was going to bite. We switched the teaser for the mack, the fish made a half lunge at it and again, another one to disappear!! No time to keep trying. Frustrating stuff, 4 blues in the spread and not one bite, you guys’ll have to make the trek back here another day and we’ll get you on one next time…….
They are around though and their attitude will change. In 3 and bit days of fishing on the new boat here in Guatemala we have had 9 blues up, she has the hum!
Dates are starting to fill up especially January through April though still availability for both boats. November and December traditionally good fishing months and dates are available. Don’t miss out, we’re confident of a great season ahead.