After spending the last few weeks busy with the boat out of the water doing the yearly maintenance and getting the lodge in order it was great to finally get back out on the water. Even better to get out there with family and a good friend all the way from New Zealand, my brother Marcel(o), his son Matthew (Mateo) and Craig(o) Kelly from the Bay of Plenty NZ made the long haul out here to Guatemala for a week of checking out the sights and of course the main event a couple of days of fishing. 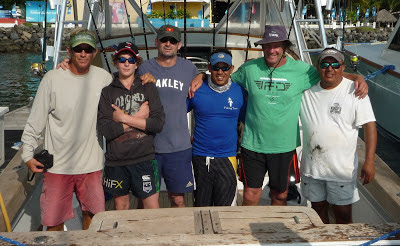 Kiwi crew….2nd from left, Matthew, Craig and Marcel with the crew.
The guys timed their trip well with some great fishing, and all just 12-15NM from the breakwall! Our first day out was trying to find the fish and get the guys familiar with the spread we pull here. After hitting the blue water at just 7NM off the beach we put them out and found some fish after about an hour and a half of trolling with a double header of sailfish in the spread, hooked and released. 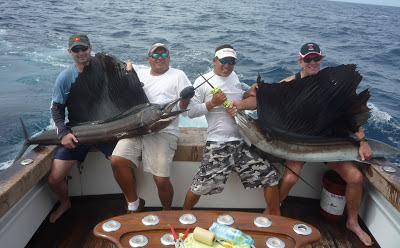 Craig and Marc with one of the double headers of the day.
From there on in it was pretty consistent action throughout the day with 3 triple headers creating a bit of mayhem on deck, the first triple was a bit of a fire drill for the guys with 3 bites and 3 misses. A great way to learn though and the next 2 triple headers in the spread were all hooked and released successfully. We left the fish biting at 2.30pm (work duties calling) and headed back to the dock with 17 releases from 27 bites as well as 4 big mahi’s boated ensuring a great meal back at Sailfish Oasis. 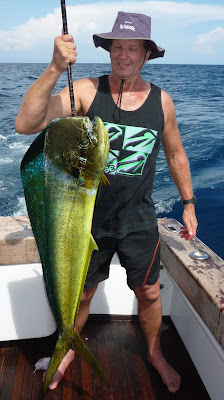 Marc with a nice bull mahi 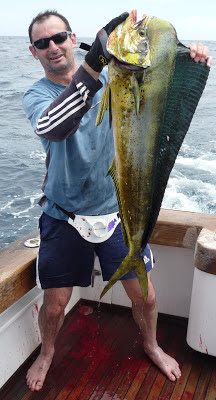 Craig with another….
The next day, Friday October the 12th we headed back to the same area and were soon into the sailfish bite. More of the same with several cover-ups in the spread and the guys were on it, fishing well. Around mid morning we saw a group of spinner dolphin off-shore and worked them for a couple of yellowfin tunas…. 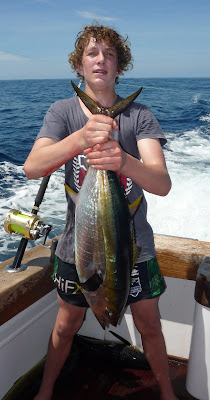 Mateo with his first yellowfin tuna.
We also landed another nice mahi and raised a marlin in the spinners that stayed deep on the teaser and peeled off before we could get a bait back. All in all another great day considering we pulled lines and headed back to the dock before 1.00pm with 10 sailfish released from 14 bites. Good averages and had it not been for other commitments we would have caught a bunch more…. 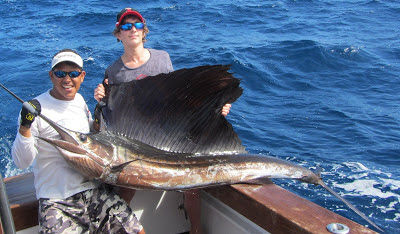 AND his first sailfish release
A great trip for the Kiwi’s and what a start to the season!! We heard from some of the local boats that went out over the weekend that the sailfish bite was on in the same area.
We have some great last minute deals available for November/December so get in touch with us for more details, these months are traditionally very good for the sailfish as well as good blue marlin fishing and of course the big mahi’s and yellowfin tunas are often encountered.
SAILFISH OASIS is ready after yearly maintenance looking good and the perfect spot to come back to after a big day on the water… 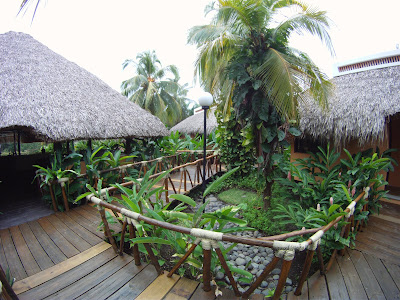 Boardwalk to the bungalows and main rancho 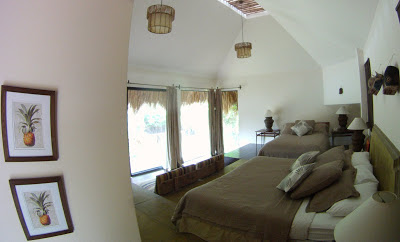 Guest room, SAILFISH OASIS
Ideal for corporate retreats for up to 20 guests, extra options include golf at nearby Pete Dye designed course with incredible volcano views, volcano climbing, mountain biking and sightseeing in UNESCO world heritage site, Antigua. These are just some of the extra activities available, though it is the fishing that is absolutely number 1, we are looking forward to another great season here in Guatemala, don’t miss out!