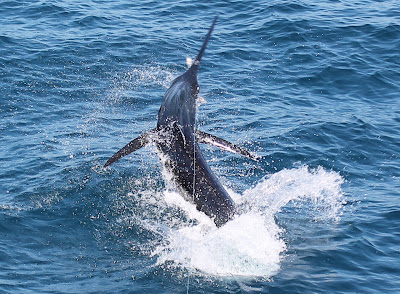 March 29th and 30th Michael Thorn-Leeson came back to Guatemala for his second trip since November this time with his son Mike Thorn-Leeson. Our first day out was tough with a late cold front blowing through making conditions less than ideal and blue water hard to find, conditions were a bit better their second day out. Staight out, we marked plenty of bait at about 40-60ft with a few individual fish around these bait balls, fishing was still slow for here though the guys did well going 3 for 3 on sails and near the end of the day Mike got himself a solid 325lb+ blue that gave him a work out on the stand-up before we got the tag in and released it. Mike’s first, nice job! 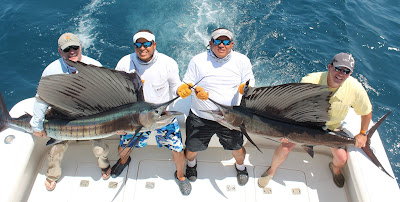 Father and son with a double header

April 5th and 6th Cluade Seago was back in Guatemala, this time with Greg Heller, Larry Holmes and Terry Schaaf. A bit of a late start on Friday though after just 10mins of lines in we had a 200 odd lb blue marlin hot on the short teaser, got the bite on the pitched mackerel and Terry had the fish close before the hook pulled…..bad luck Terry. 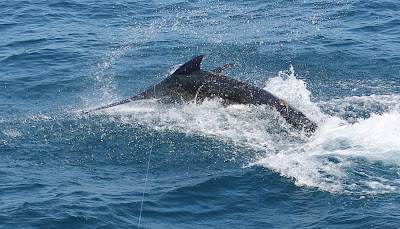 Working the same area we released a couple of sails and then had another blue up on the same teaser, this one was a nice one pushing the 400lb mark, we got the bite though missed her…….For the rest of the day we had a steady sailfish bite releasing 7 from 10 bites and raising 13 as well as Greg getting himself this nice mahi. 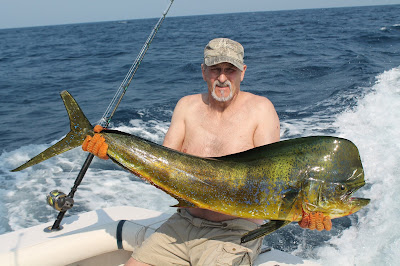 Next day out the guys fished well releasing 10 sails from 11 bites, 13 raised. A great trip all round for the guys.
We didn’t fish the mid-week though by all accounts the fishing here was good with boats raising up to 30+ sails and a few blue marlin seen as well, we got on the tail end of it though I’m picking the next couple of months here we are going to have some good sailfish and blue marlin bites. It’s not too late, we have openings and can get you on some good fishing…. 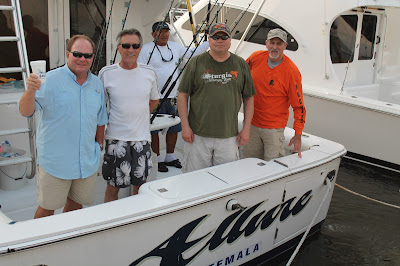 Claude, Larry, Terry and Greg had a blast down here.