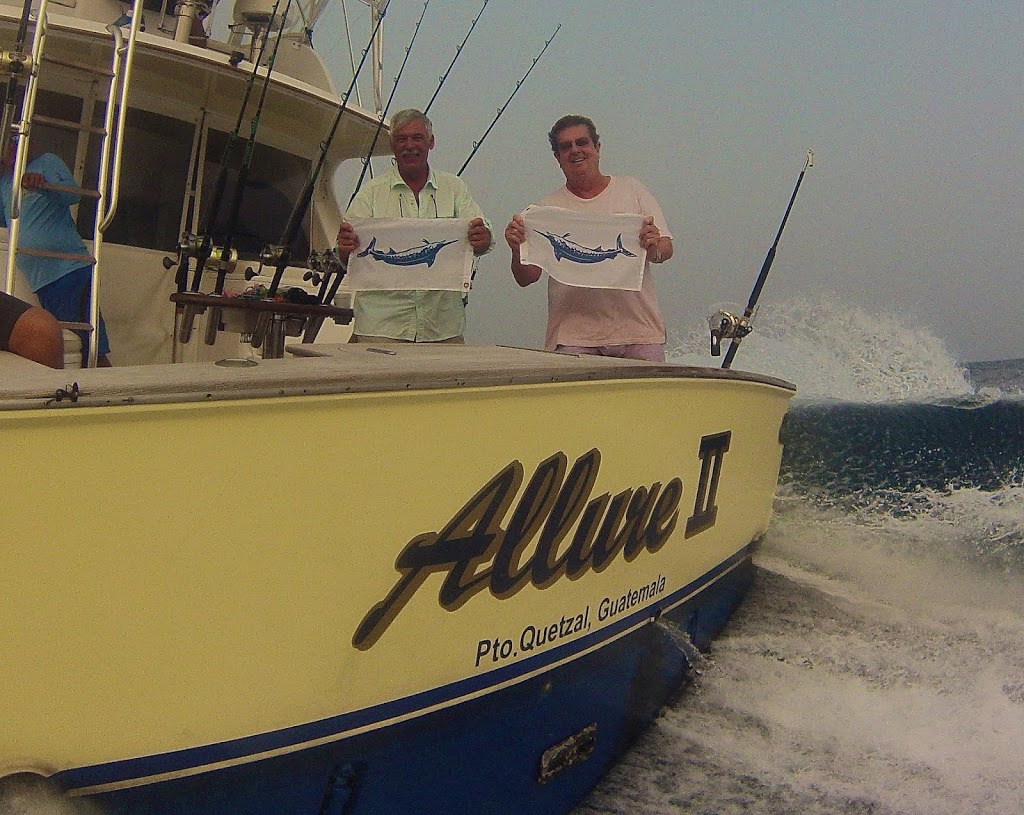 Brian Shinkle and Tim Lonsdale
April 16-19 great to catch up with Tim and Brian again for their second trip down here this season and had a blast with them. For their trip we raised 88 sailfish, some funky fish in the mix once again with 68 of them biting, some soft bites as had been the norm from these fish…. they did well releasing 38 of them. 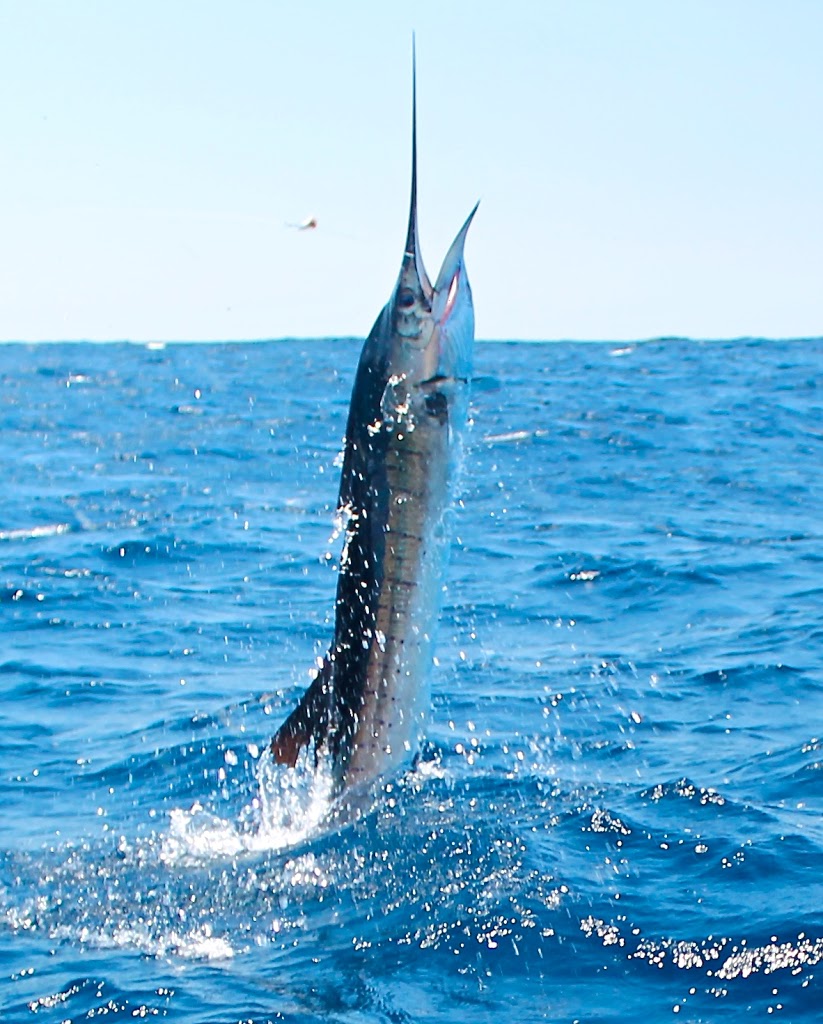 Running out on the 3rd morning we saw a marlin tailing at the edge of the drop at 10NM so started there. Couldn’t get that one to bite though a mile offshore Brian got the first bite of the day a nice tough blue in the 300lb class tagged and released! 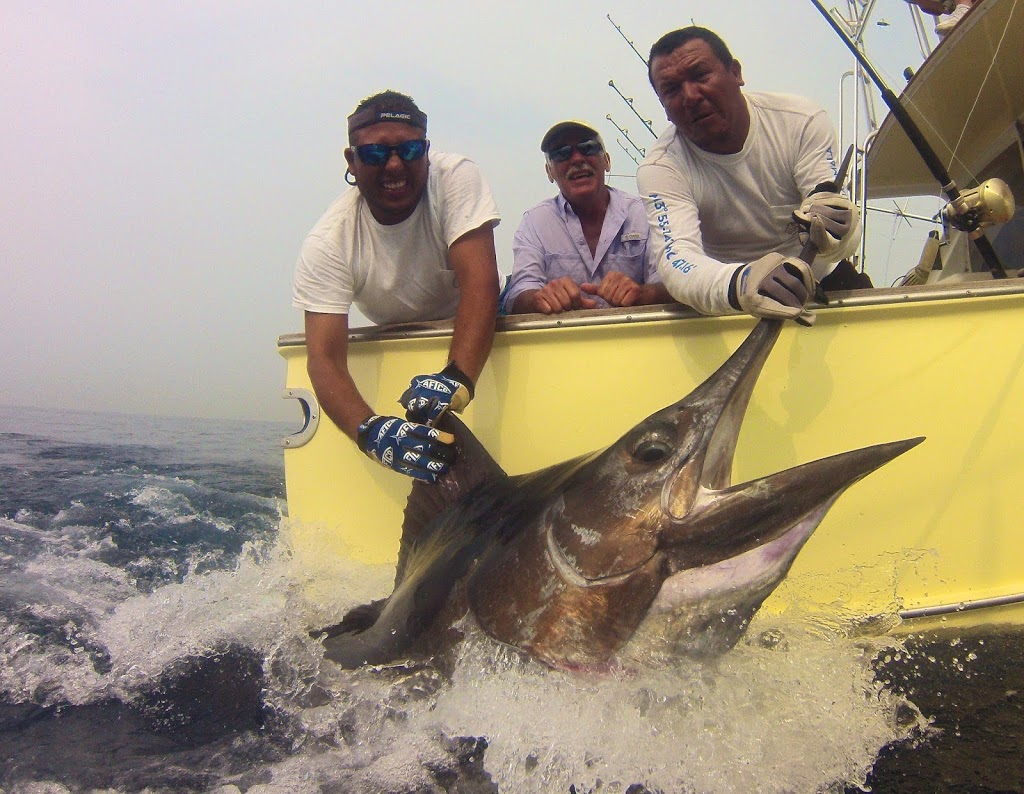 Nice one Brian!
Working back toward the drop off we got the bite from another blue that unfortunately threw the hook. Worked the inside area for another hour before pushing out off-shore to the sailfish bite…
Next morning we tried 4NM toward the east of the previous day to the steepest part of the drop at 9NM off the breakwall, we didn’t even have our full spread out when here she came hot on the teaser. Tim got the bite on the pitched mackerel and an hour later we got the tag in and released a nice blue of over 400lb. 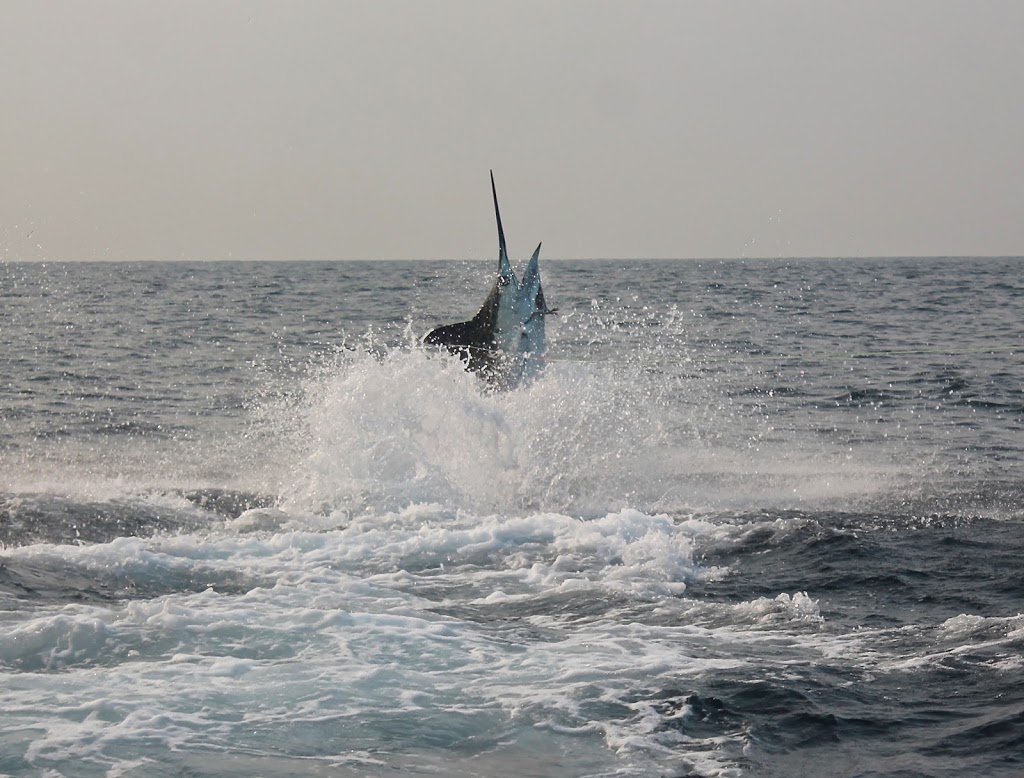 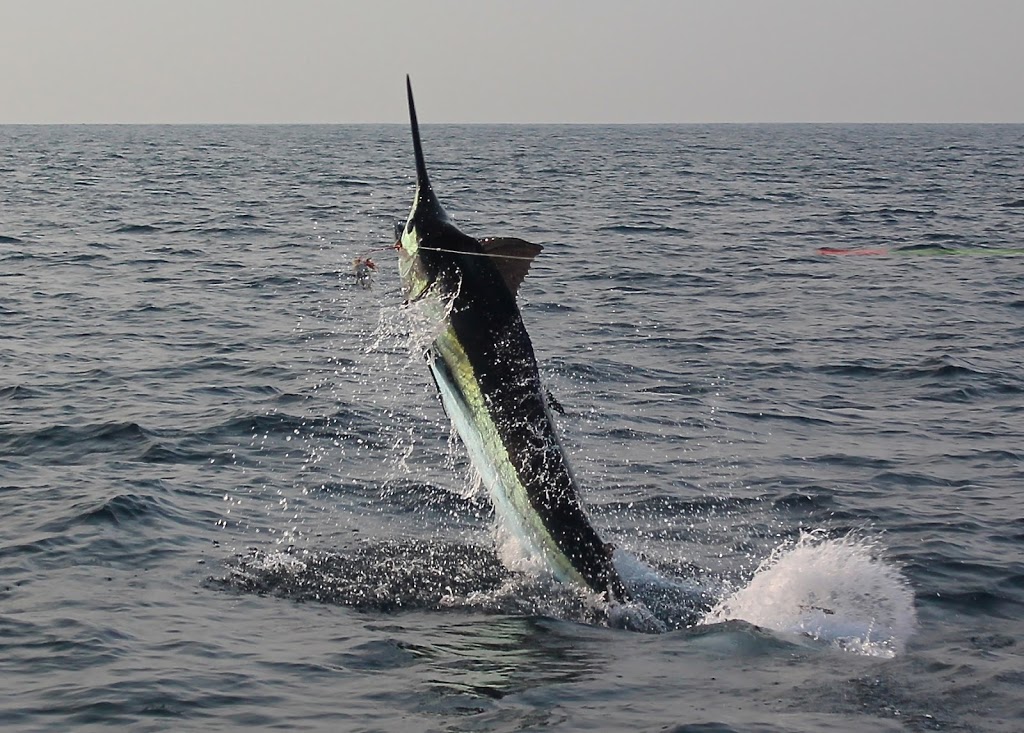 And just before getting the tag in.
Good effort Tim!
Worked the inside area for another hour or more with no luck before heading offshore to release 7 sails from 15 bites for the day.

Bill Easum, J Godwin, John Price and Scott Kozak with their 500th billfish of the season!
April 14-15-16 nice to see these guys back down at the Lodge this time with John Price fishing with Capt Eddie Bairez on Capt Hook. Their first day out the fish were biting and they did well with some soft bites in the mix releasing 21 from 30 bites, the next 2 days things slowed down some though their averages remained right up there with 11 from 16 and for their last day out 11 from 14. The last fish of the day brought up an great milestone for their season down here with a total of 504 sailfish and 2 blue marlin for Team USA and Team Maverick since December between CR and Guatemala. The majority coming out of Guatemala, helluva season there fellas! 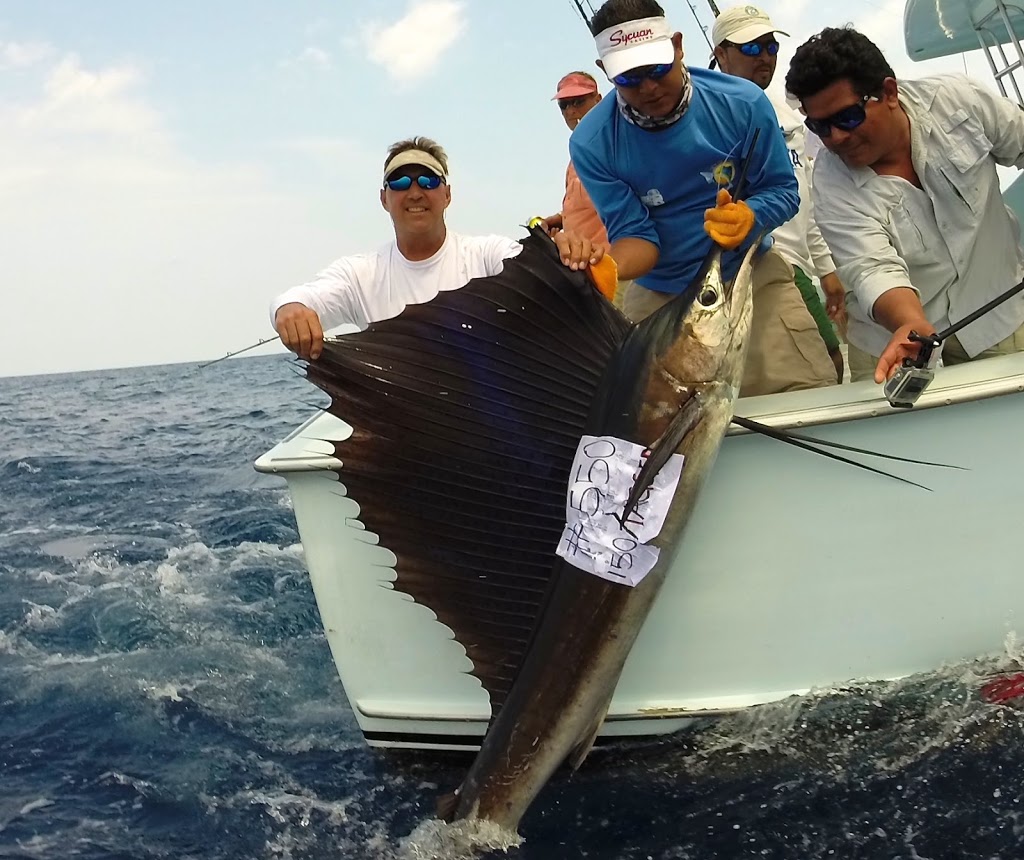 Scott Kozak with #550!
Also a big congratulations to Scott Kozak who released a personal milestone billfish #550……150 of which he tagged.
Congrats once again to these hard core fishes and good luck for the up-coming tournaments they’re going to fish this summer in Nicaragua and then later on in El Salvador…. 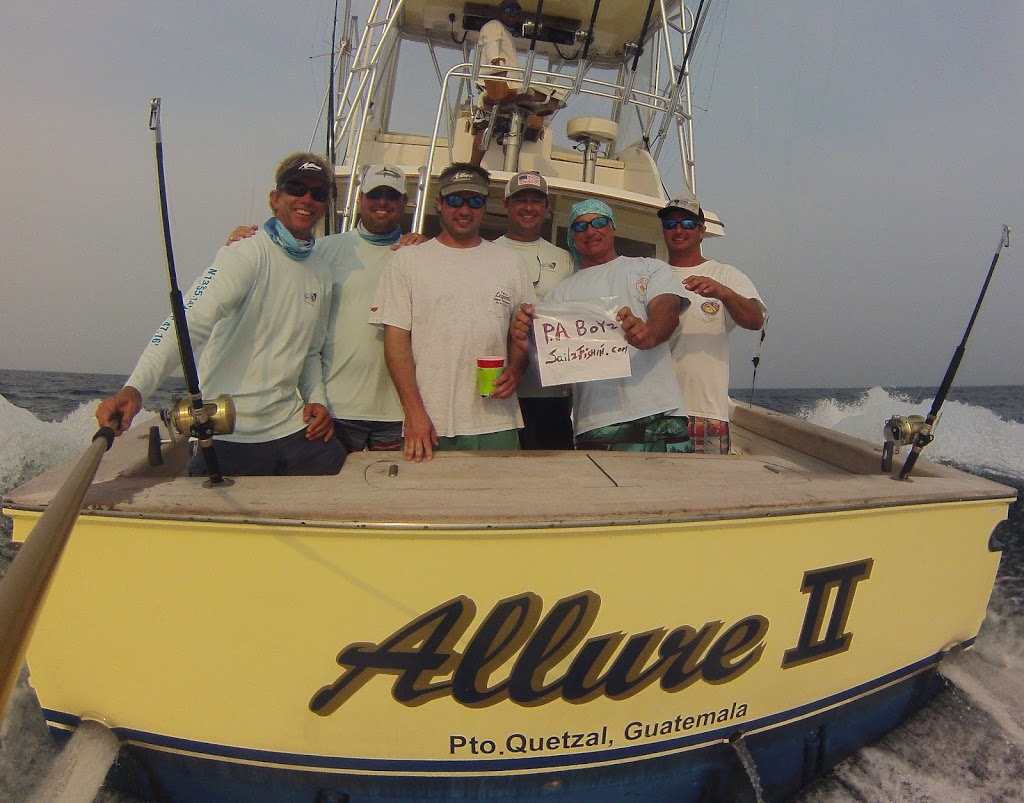 2nd from left: Jonathan Meyer, Matt Richter, Gabe Meyer with Bobby and Brian Richter
April 21-24 we welcomed Bobby Richter back for his 3rd trip down to Guatemala since February!!! Never a dull moment when he is down here and a good fun group to boot with his 2 sons Mateo and Brian and good to see Jonathan back down here with his brother Gabe.
First day we pounded the inside of the pocket looking for a blue that didn’t materialize and after making the run offshore to the east we raised 25 sailfish, getting 24 to bite and released 16, also missed a striped marlin that came in hot and bit a couple of baits.. 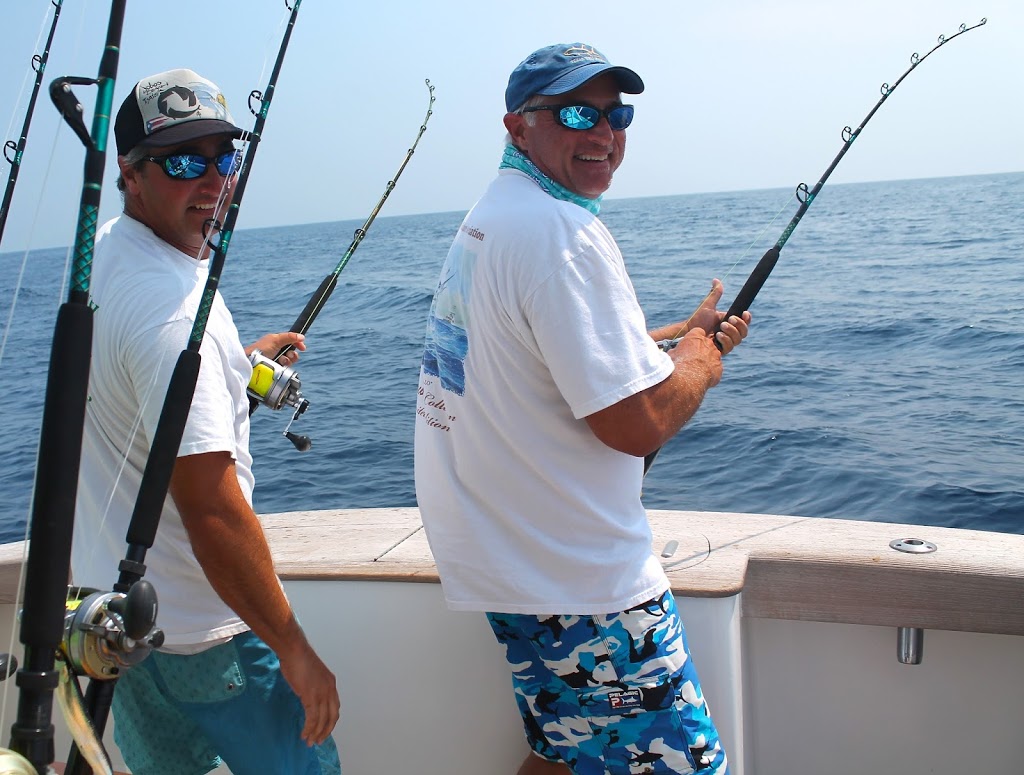 Double header for Brian and Bobby…
For the next few days we raised 55 sails, getting 43 to bite and released 24, we spent some time on the inside looking for a blue marlin over the odd morning though no luck….and the morning we didn’t look they were biting….seemed to be the way it was for me! 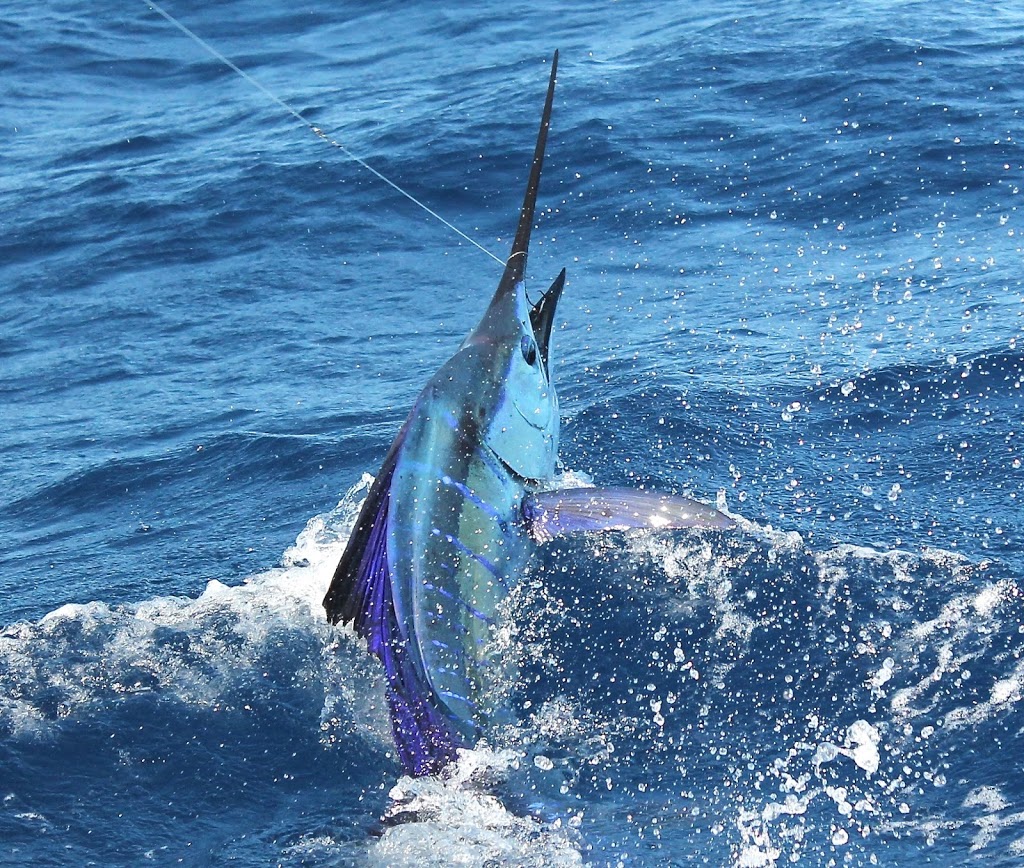 Lit up!
A bit tough for us though still a good time had, impossible not to with these guys! We also got into a bunch of small dorado out there and one nice bull of about 25lbs 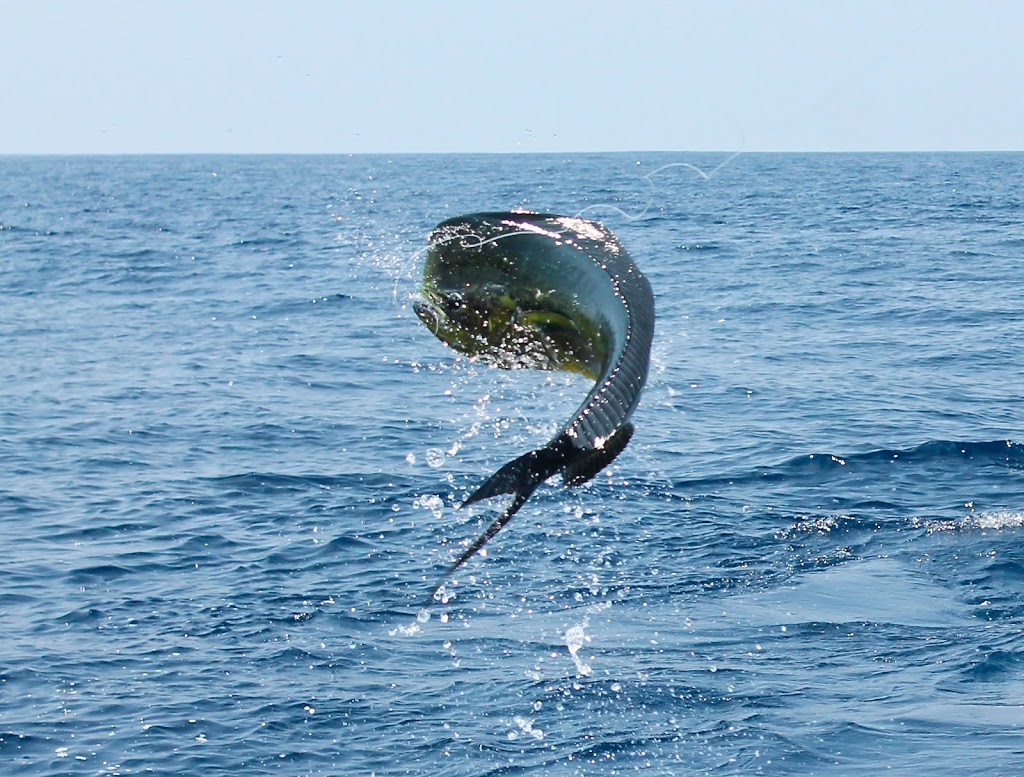 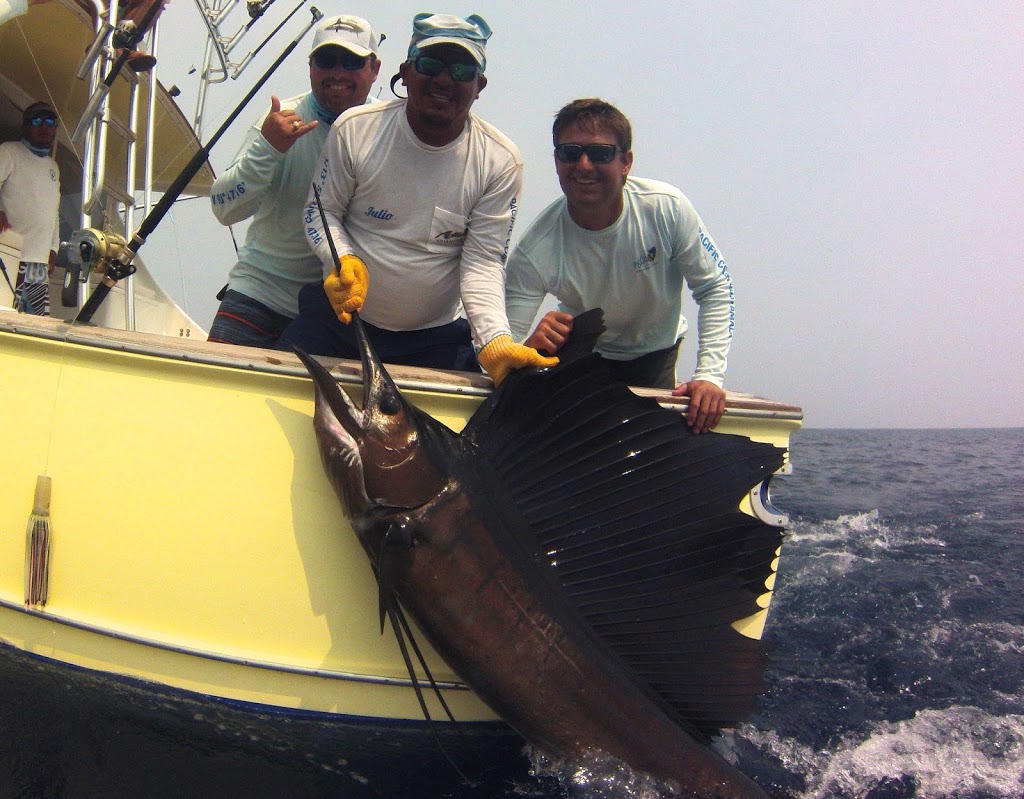 Jonathan and Gabe.
Gabe was on it, for a first time effort offshore fishing pitching to sailfish he picked it up and was hooking ’em like a pro….
We’ve had the last couple of days in and it sounds like the blue marlin at the bottom of the pocket here in close have started biting again with boats raising up to 4 a piece. The sailfish bite has been a bit slow inshore though they are bound to turn on in the coming days with plenty of bait and deep blue water to check out. We are out there again tomorrow 28th April onwards and looking forward to it.
Still some openings in May and it is looking like we are going to have a great summer blue marlin bite going on from here on through August. We’ll be here so get in touch to get into it!
Contact:
liz@sailfishoasissportfishing.com